The North West highlands in October is always a gamble with the weather (mind you, one could say it's a gamble any time of year!) but this year we struck it lucky: out of 6 days walking we only got wet in the final half an hour. This was a rare solo day in the hills for me - my other half wanted a rest day, but offered to drop me off and pick me up wherever I wanted. Partly inspired by this excellent report https://www.walkhighlands.co.uk/Forum/viewtopic.php?f=9&t=82796 I decided to try Lawson, Ling and Glover's Route on Beinn Eighe, and the traverse the western end of the ridge as far as Spidean Coire nan Clach.


Eighe.gpx Open full screen  NB: Walkhighlands is not responsible for the accuracy of gpx files in users posts

I set off from the main Beinn Eighe car park where this old stag has become a regular fixture: 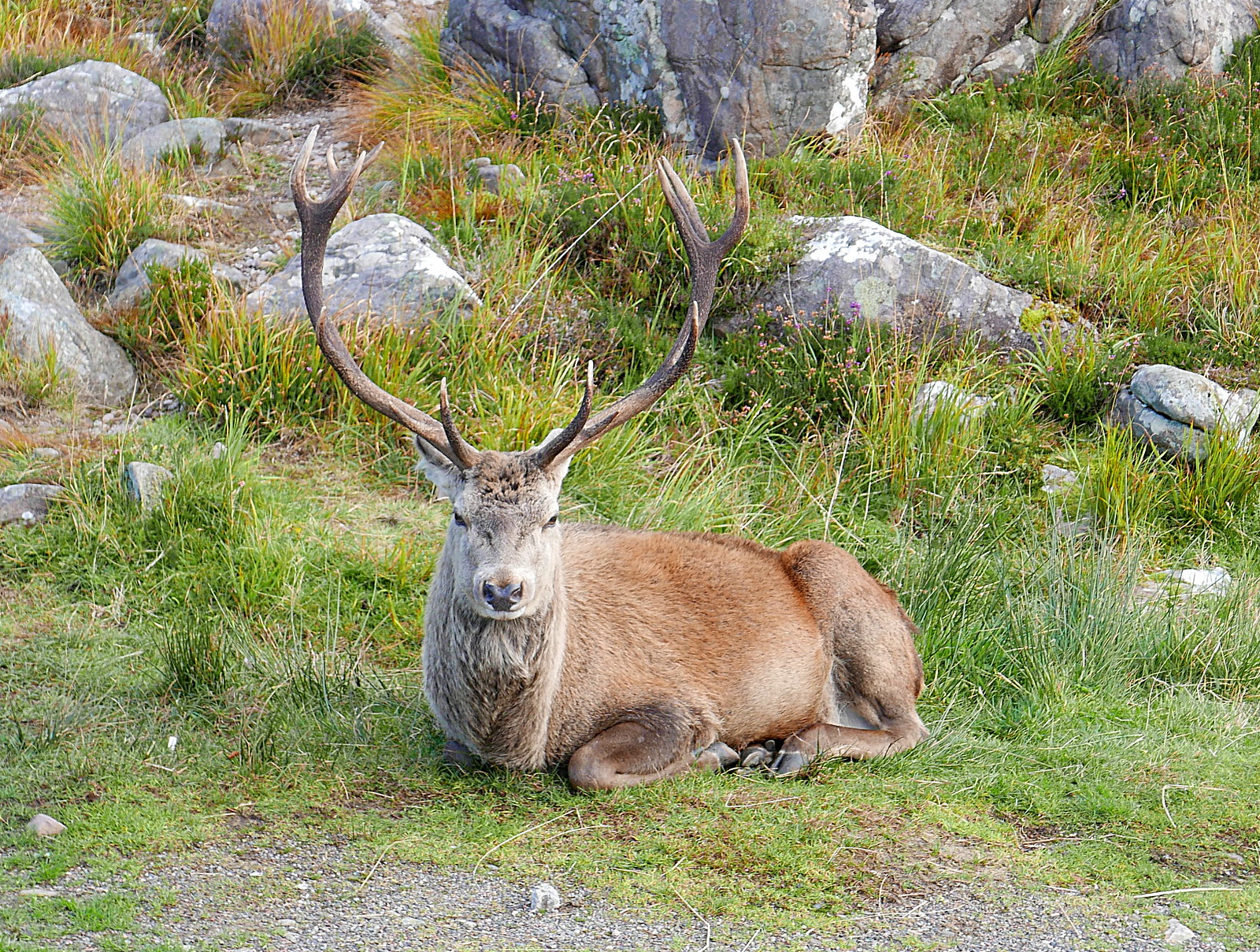 As I started up the path the moon was setting over the eastern end of Liathach: 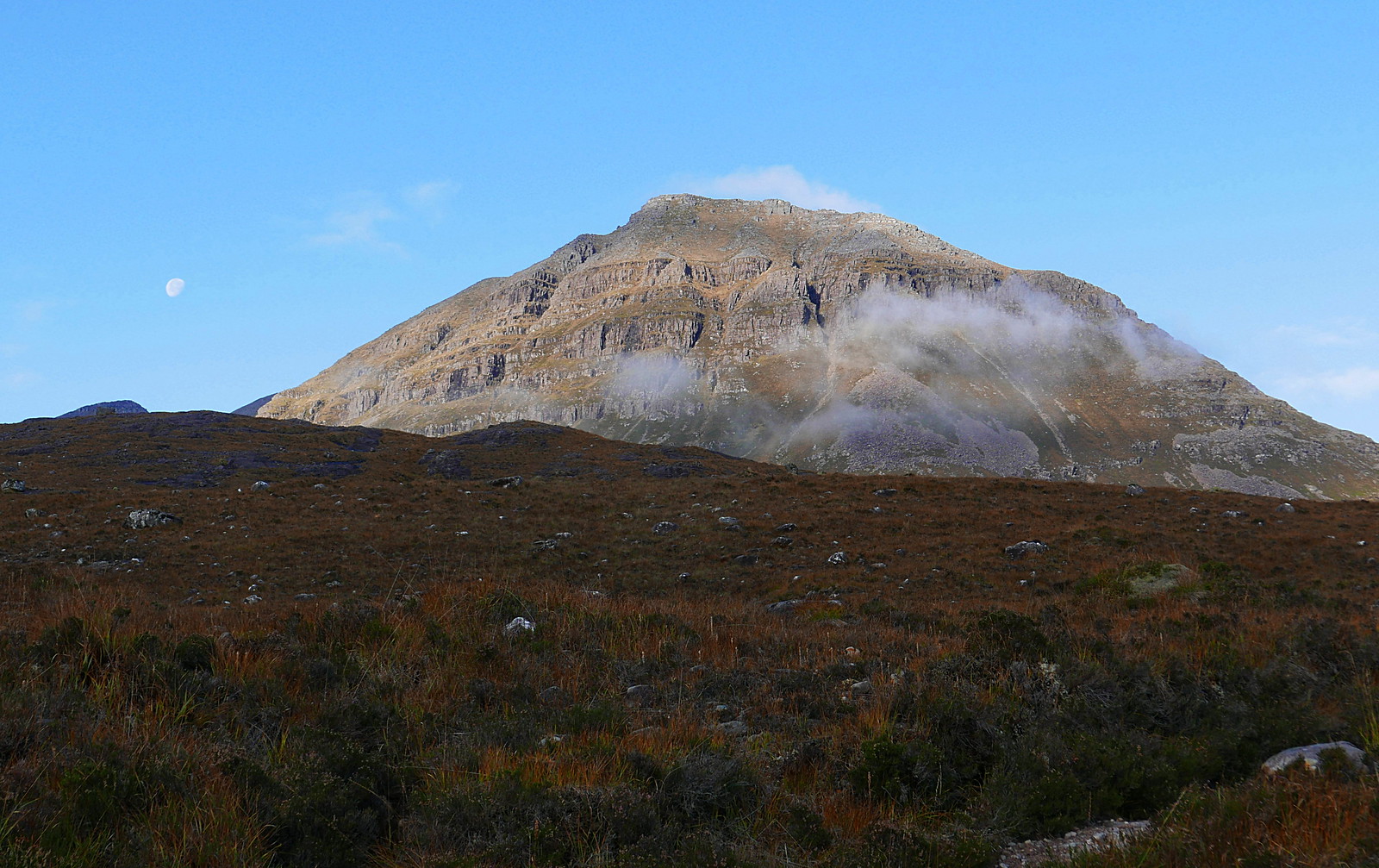 The Coire Mhic Fhearchair path is always a joy to walk - a gentle ascent with fabulous views. As you round the corner towards the coire, Baosbheinn and Beinn an Eoin come into view: 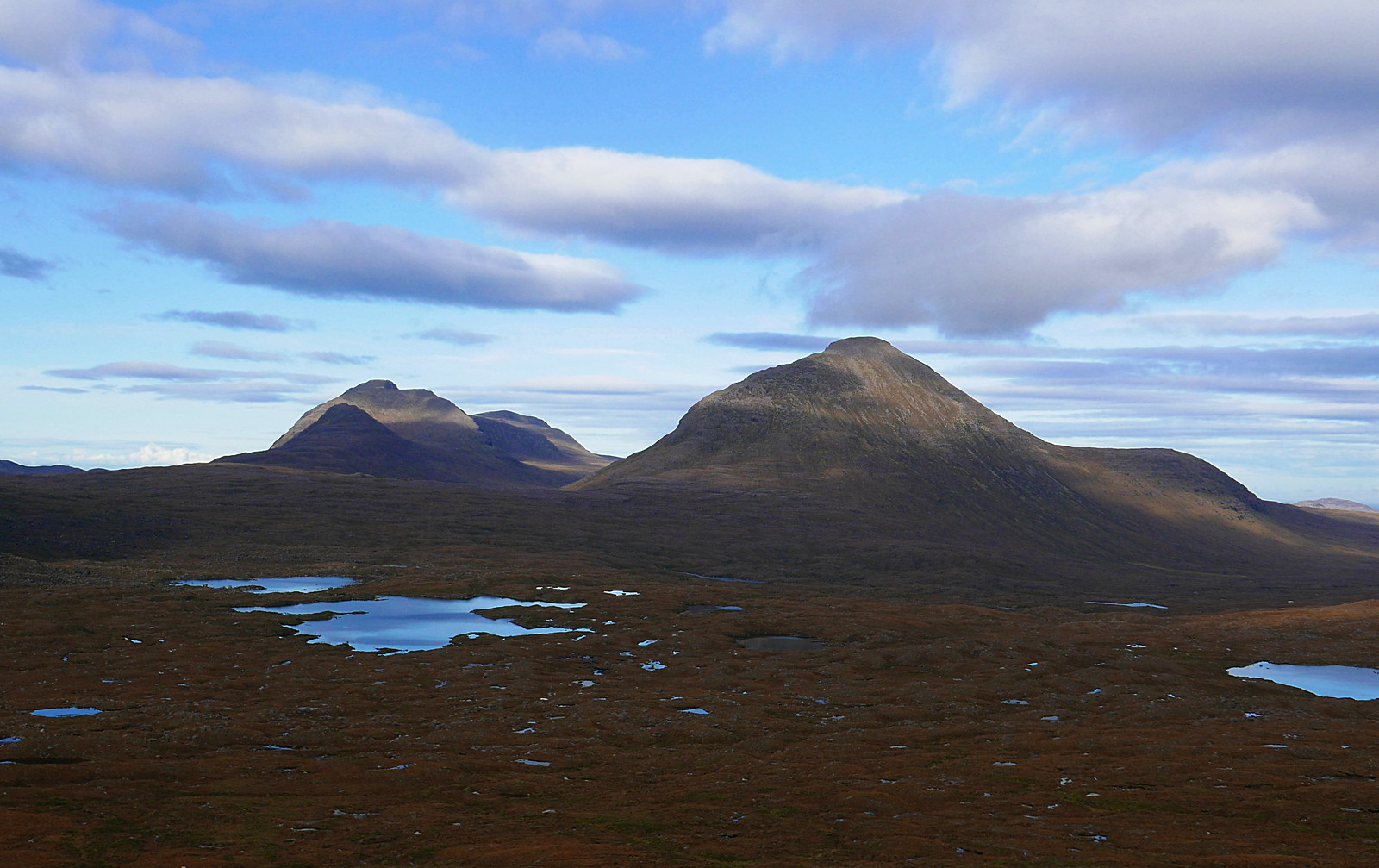 As you arrive at the lip of the coire, a scree cone on the right marks the start of Lawson, Ling and Glover's: 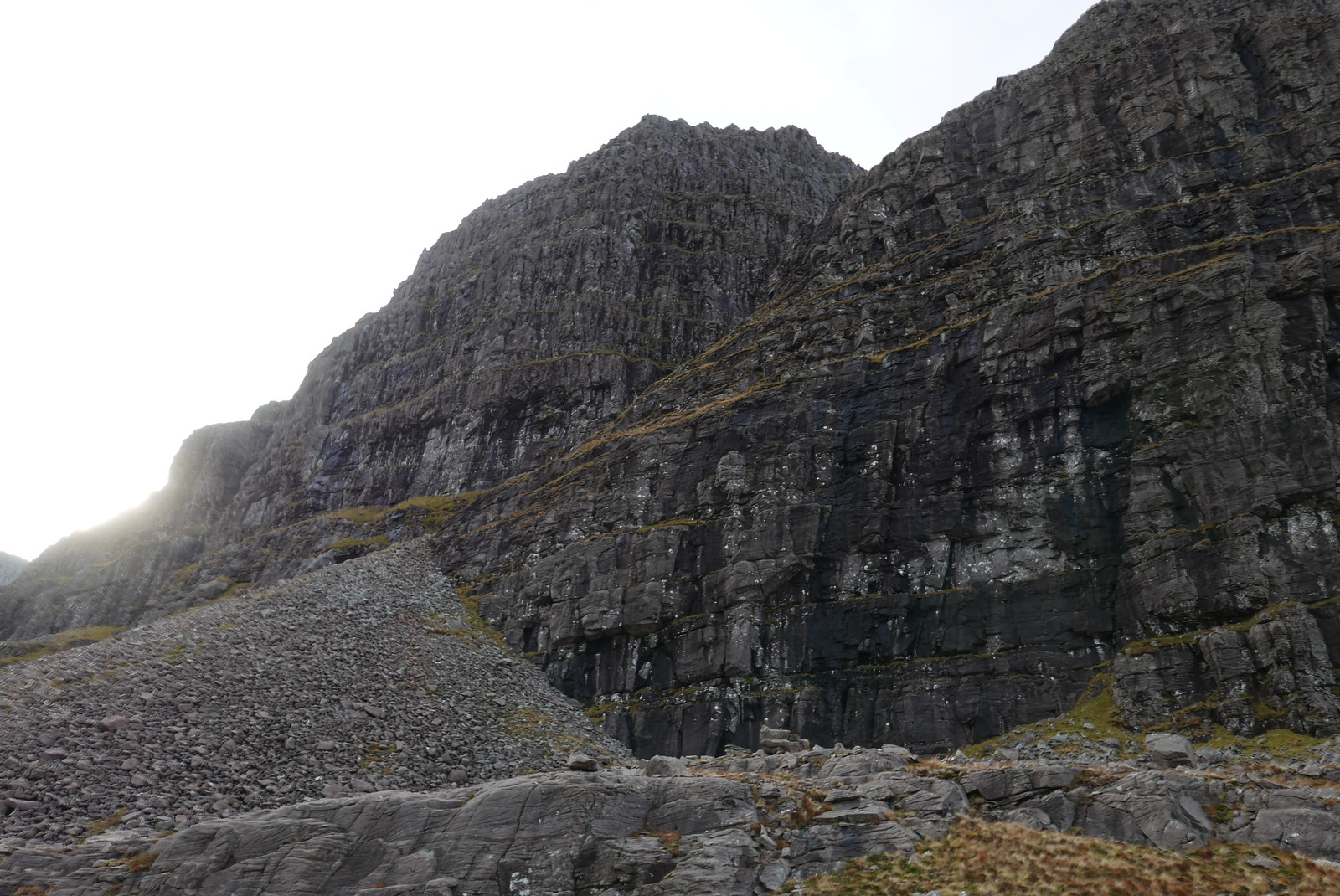 The history of this route is quite interesting: in 1899 the SMC held its Easter meet at Kinlochewe, its first organised trip to the area. The main objective was to climb the Triple Buttresses of Coire Mhic Fhearchair, but the weather was poor and this route on Sail Mhor was something of a consolation prize:

On 2nd April, Lawson, Ling, and Glover found an easy route from the loch in Coire Mhic Fhearchair to the summit of Sail Mhor. Leaving the loch at the end where the stream issues, a steep scree fan is seen on south side. Going up this into the couloir above, the right-hand side, consisting of rock and grass, was taken to, and a ridge was reached some 600 feet above the loch; at one point a flat table of rock is reached, from which there is a magnificent look down into the couloir on the left-hand side; the last part of the couloir looking from above to be A.P. From the table, the ridge steepens a good deal, but the rock is well broken up, although firm, and therefore no rope is needed; in a few hundred feet the cairn on Sail Mhor is reached.

This description still stacks up pretty well today: there are few signs of passage, bar a few crampon scratches on the hardest sections: certainly nothing like the well-worn paths on the more popular routes in the area. I tried to avoid most of the scree at the base by hugging the right had edge, but at one point I found myself on top of a patch of boulders that were trying their best to head downhill with me attached, and I had to skip smartly sideways to a more stable bit.

The open right hand side of the gully is steep grass with the occasional bits of greasy rock: it felt quite exposed and demanded care as everything was slightly damp. I tried not to think too much about the prospect of needing to reverse back down! I was relieved to find a way through the little outcrops, while looking nervously up at the scary looking tower at the head of the gully: 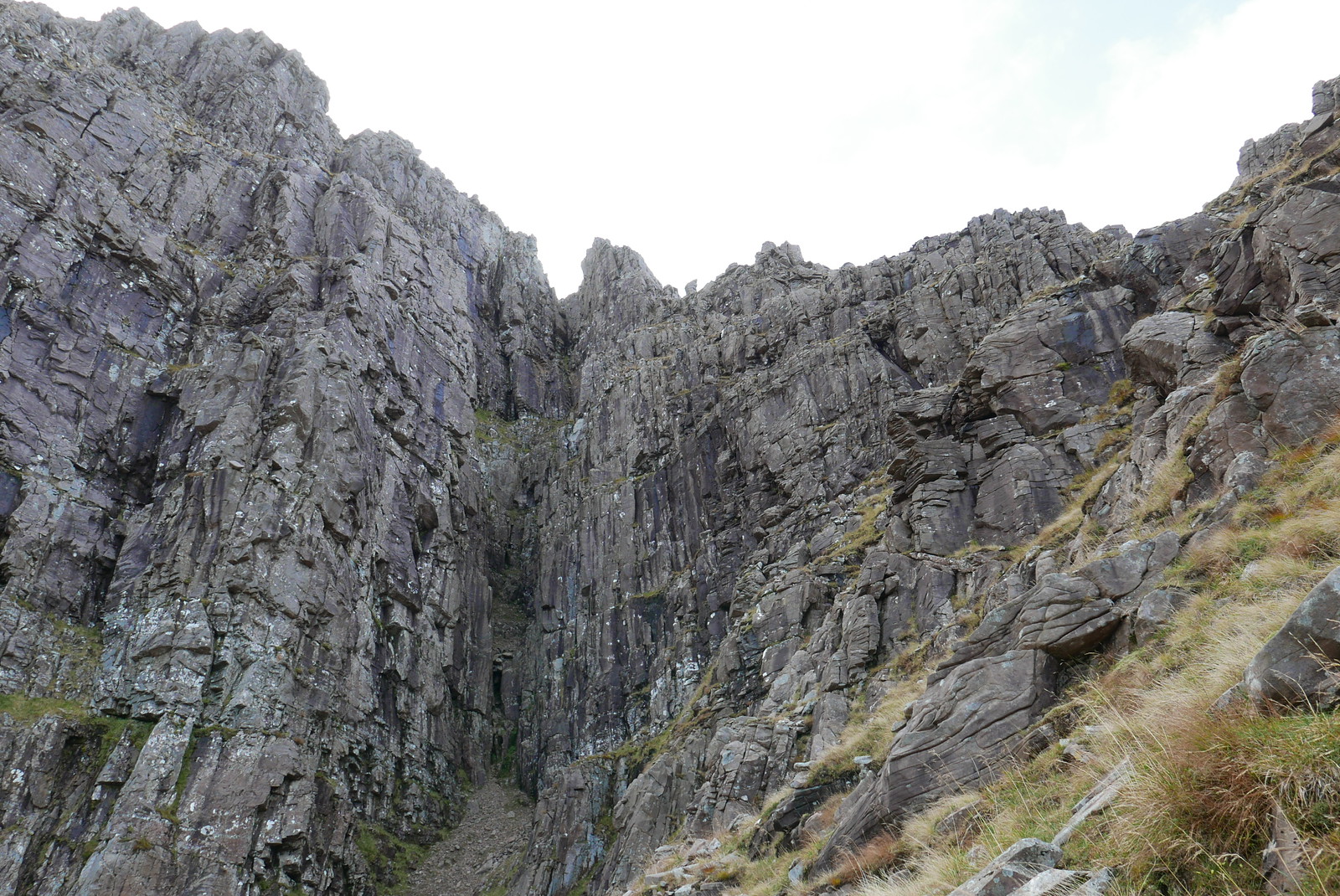 I was quite relieved to reach the ridge proper, from where the tower looks less intimidating: 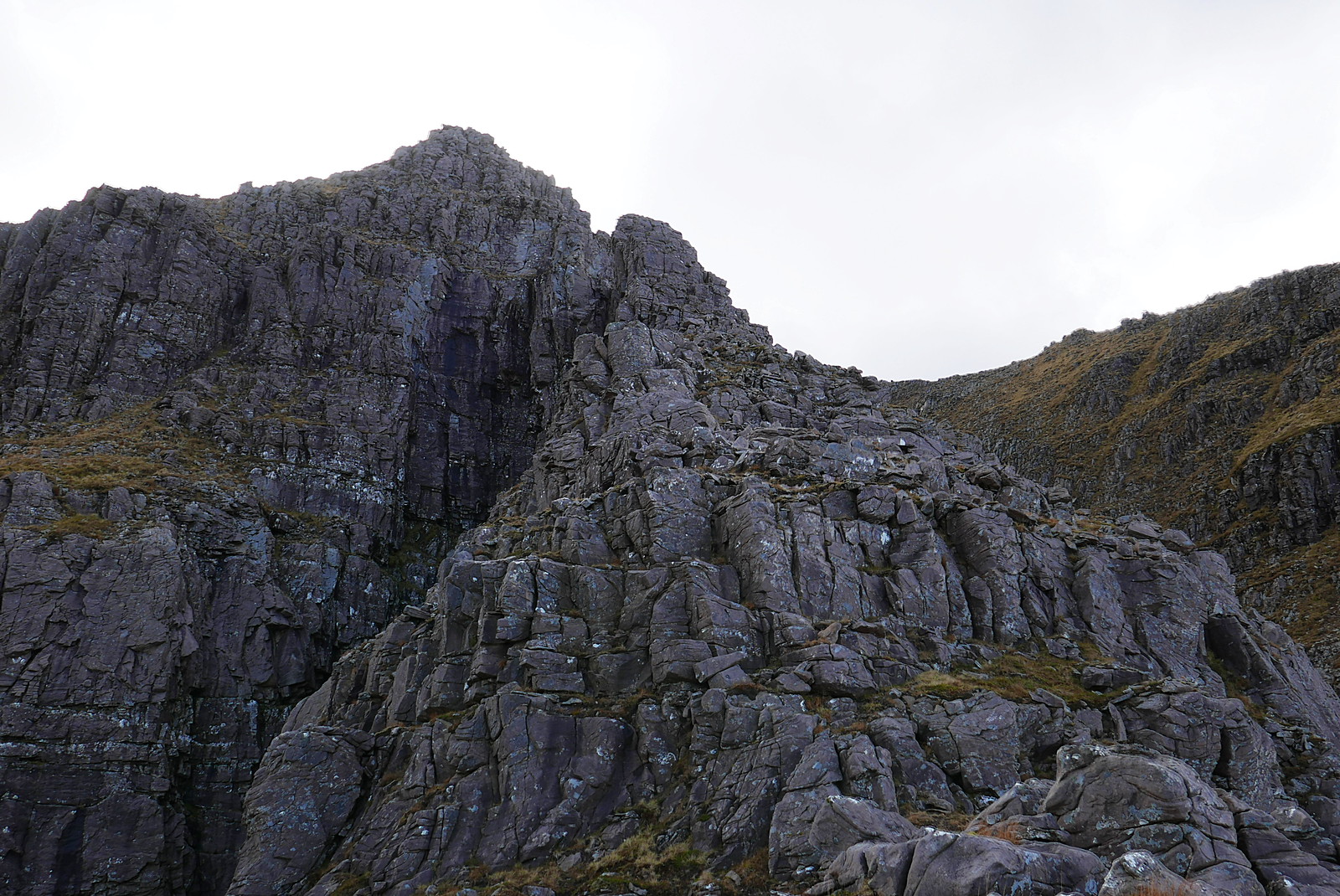 The first rock band on the ridge has a couple of steep moves on good holds, then there is easier scrambling before the tower. This is climbed by a three-step groove line leading rightwards, with the last step feeling quite exposed. I could now look back down the hardest section: 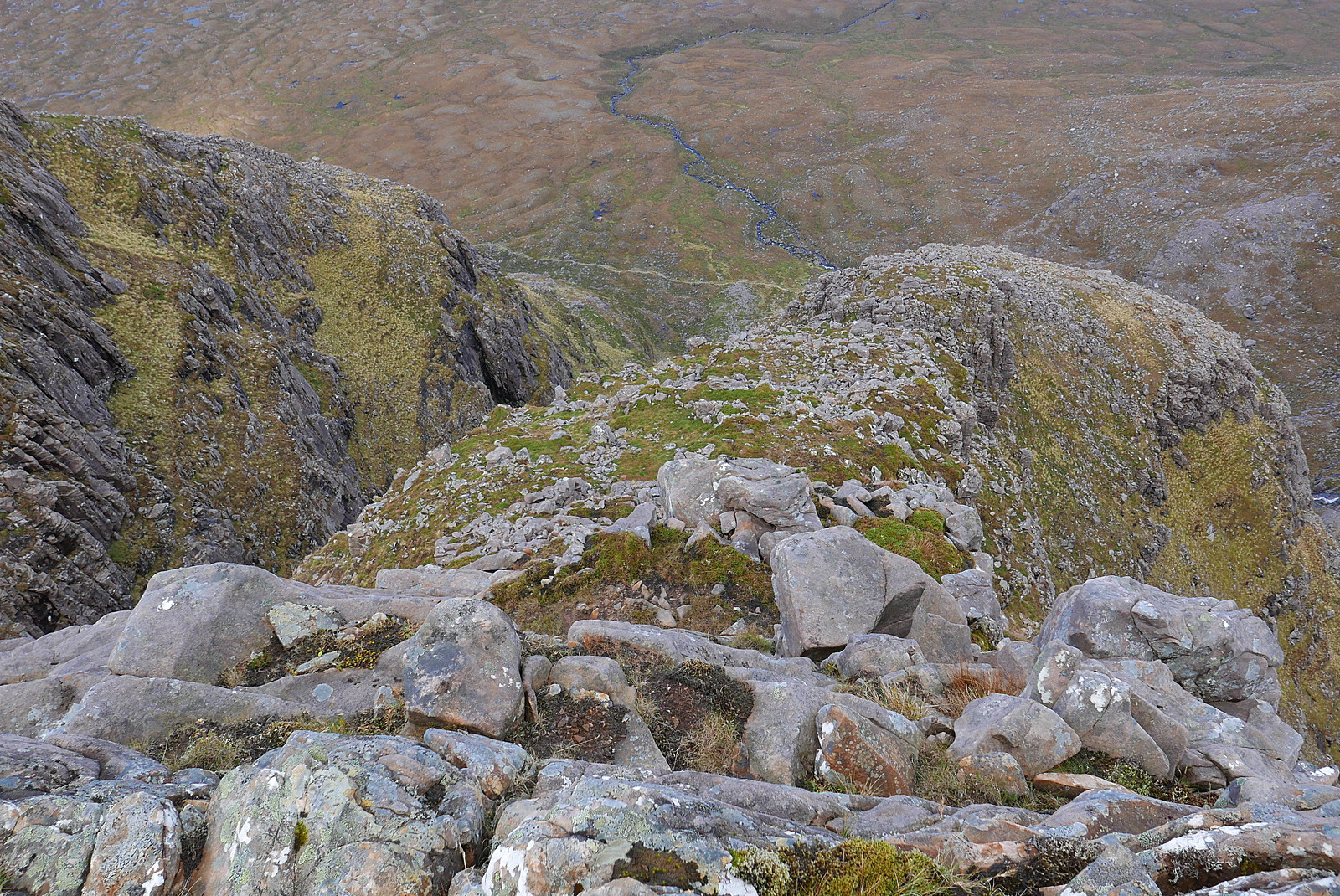 and enjoy the views of Beinn Dearg and Beinn Alligin: 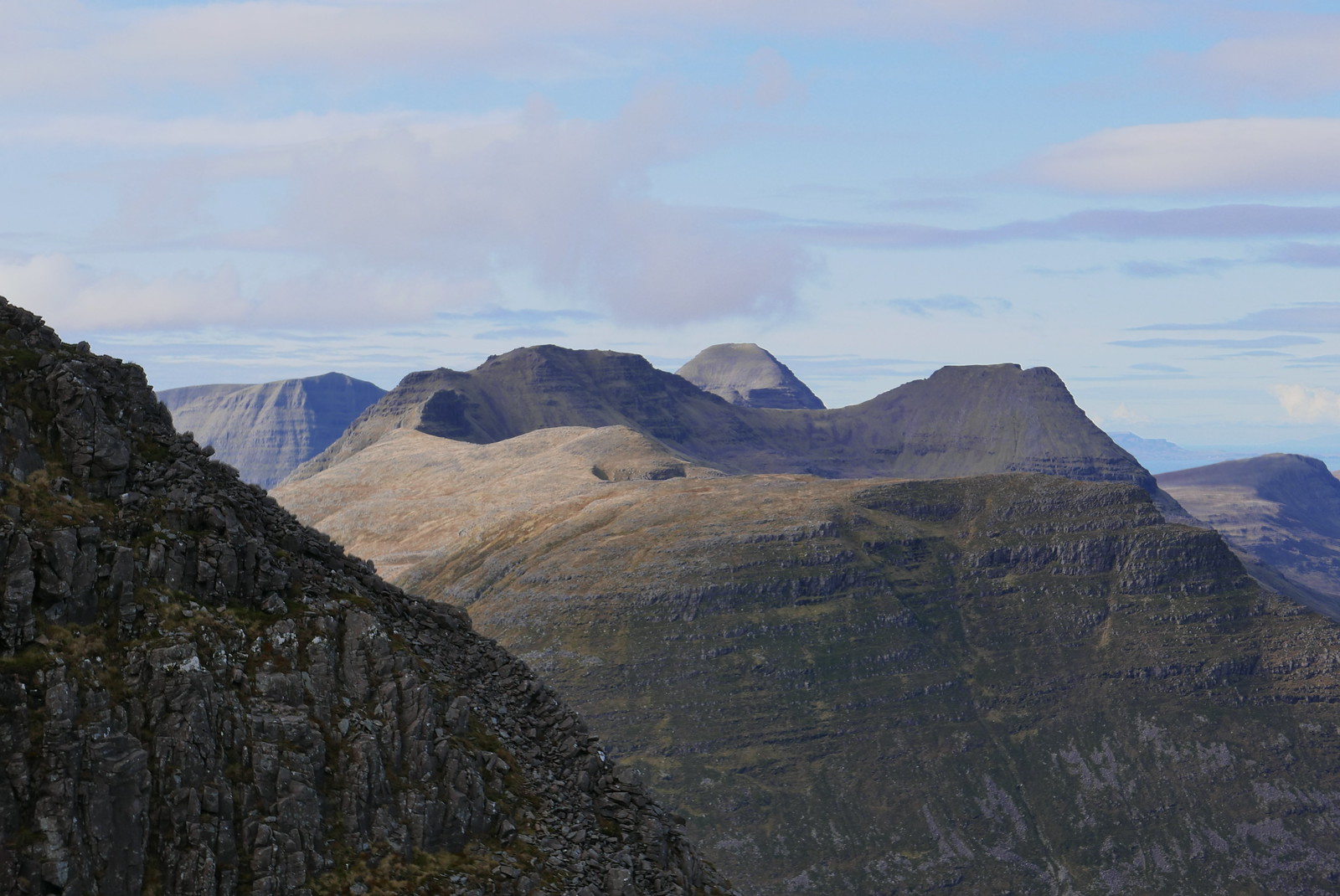 The top of the tower is a flat platform with a dizzying view down the gully to the bottom section of the route: 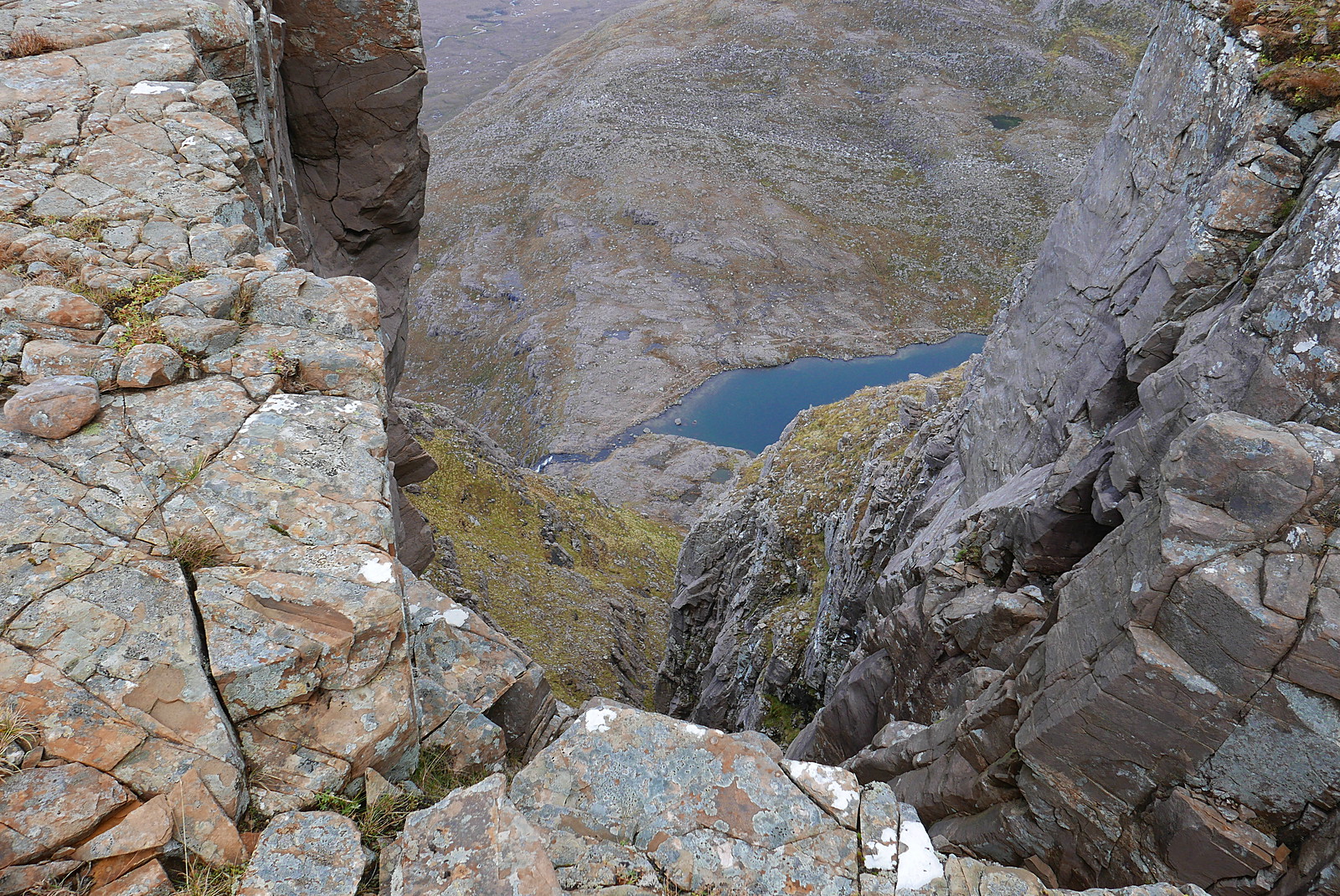 The upper section of the ridge is easier, but still has some fun scrambling, though don't expect it to be totally clean and solid! 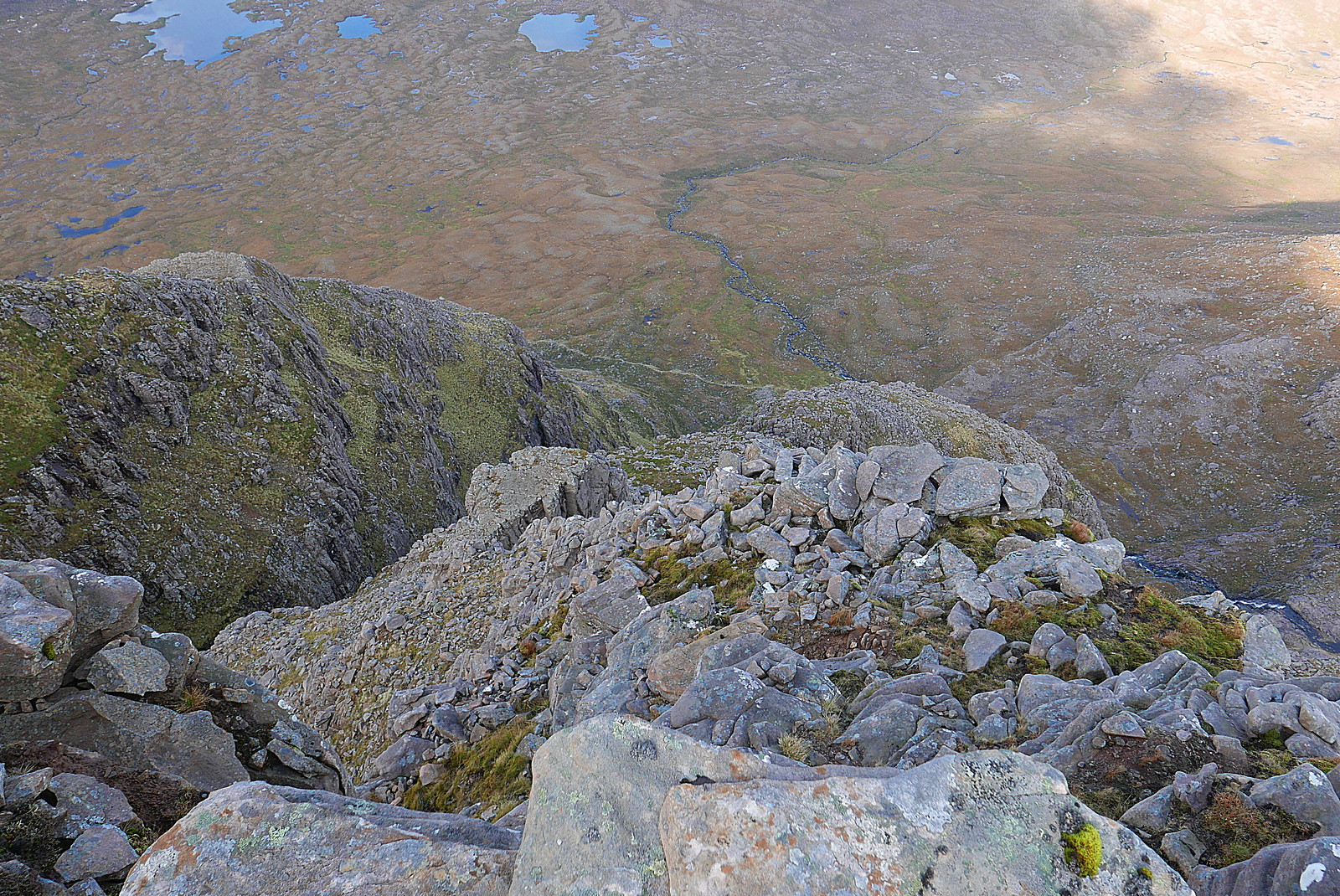 The angle now eases off and the rock changes abruptly from sandstone to quartzite. There are a couple of two-metre high steps to climb before easier walking to the summit of Sail Mhor. I stopped briefly to admire the views of Ruadh-stac Mhor: 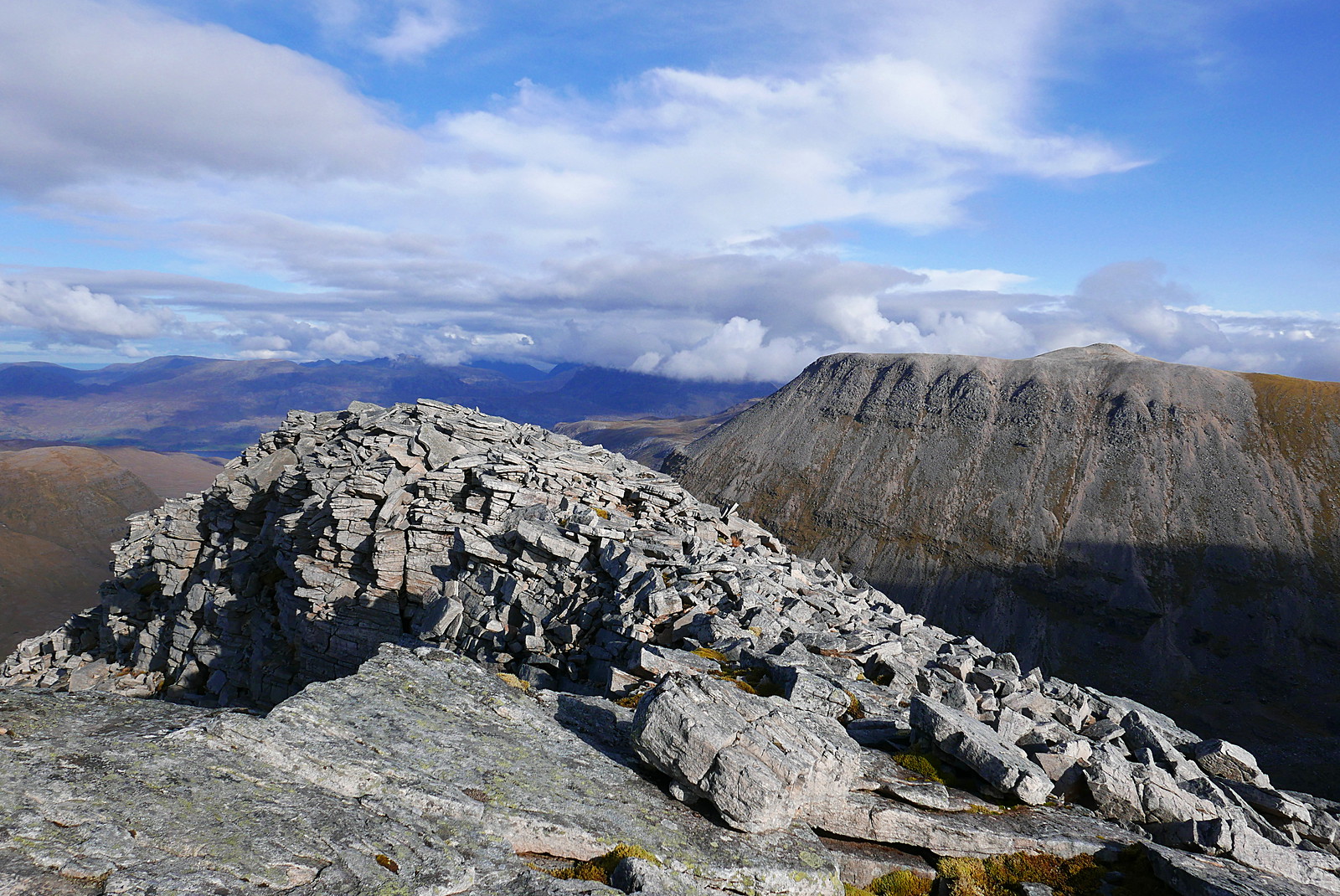 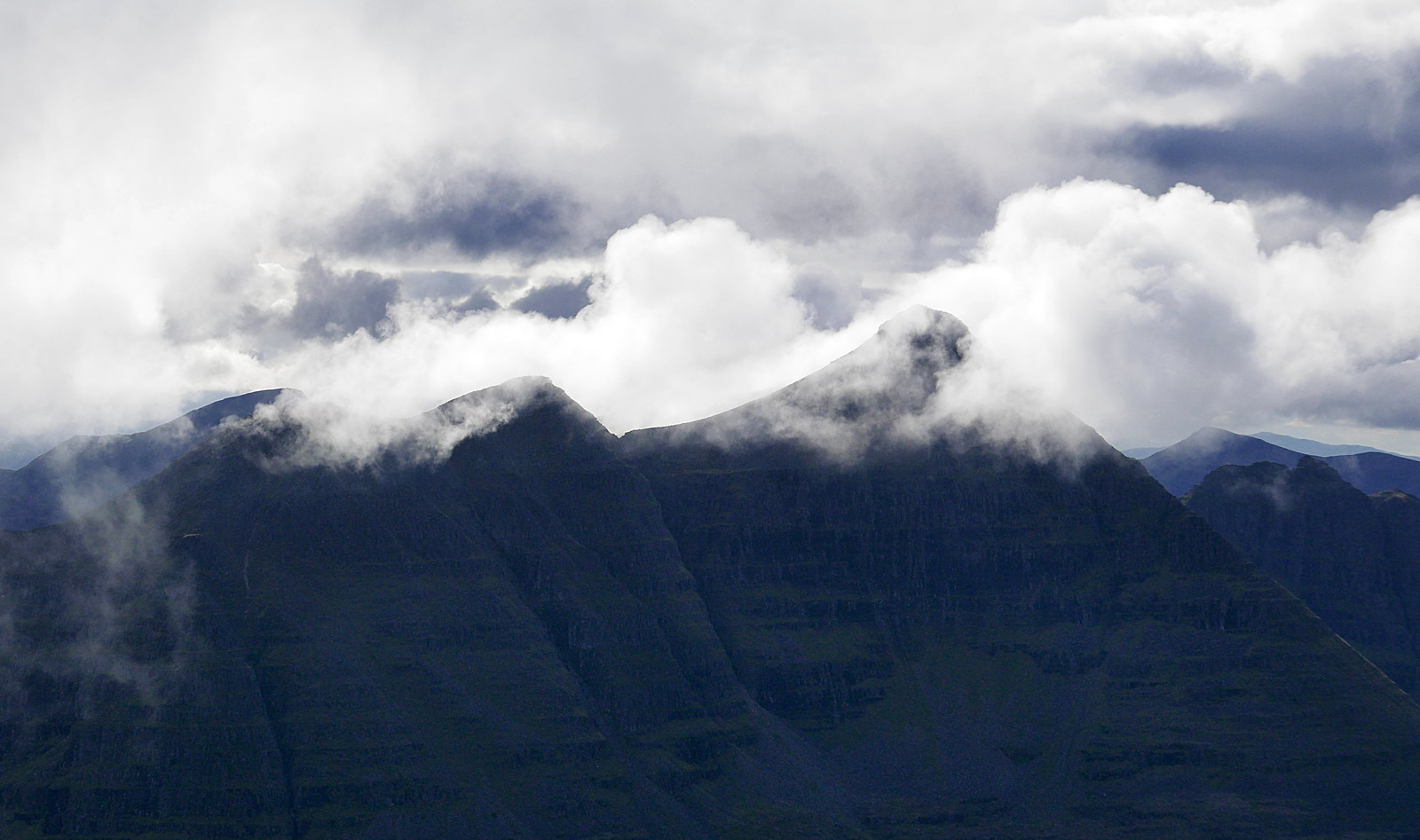 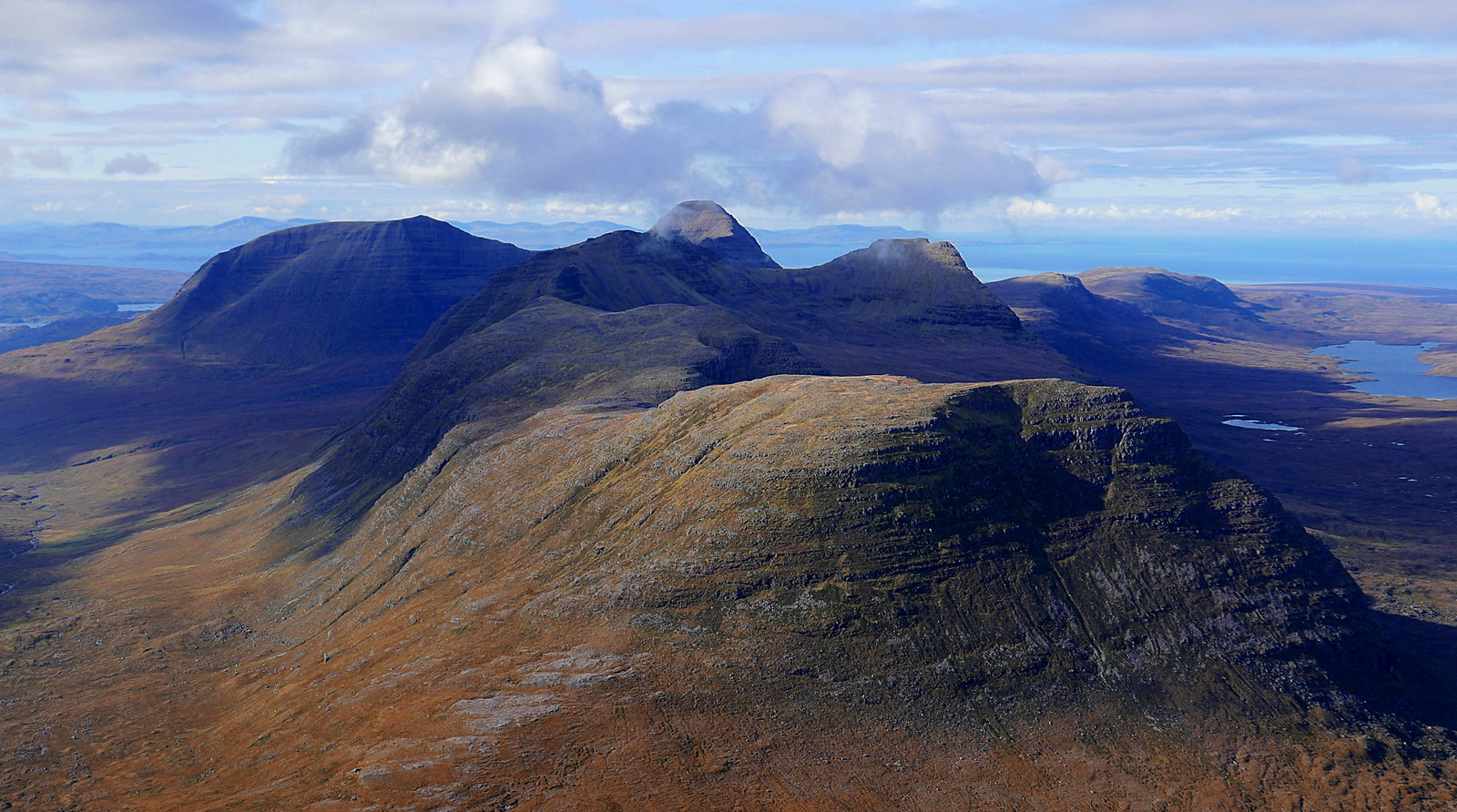 and my next objective: Coinneach Mhor above the Triple Buttresses: 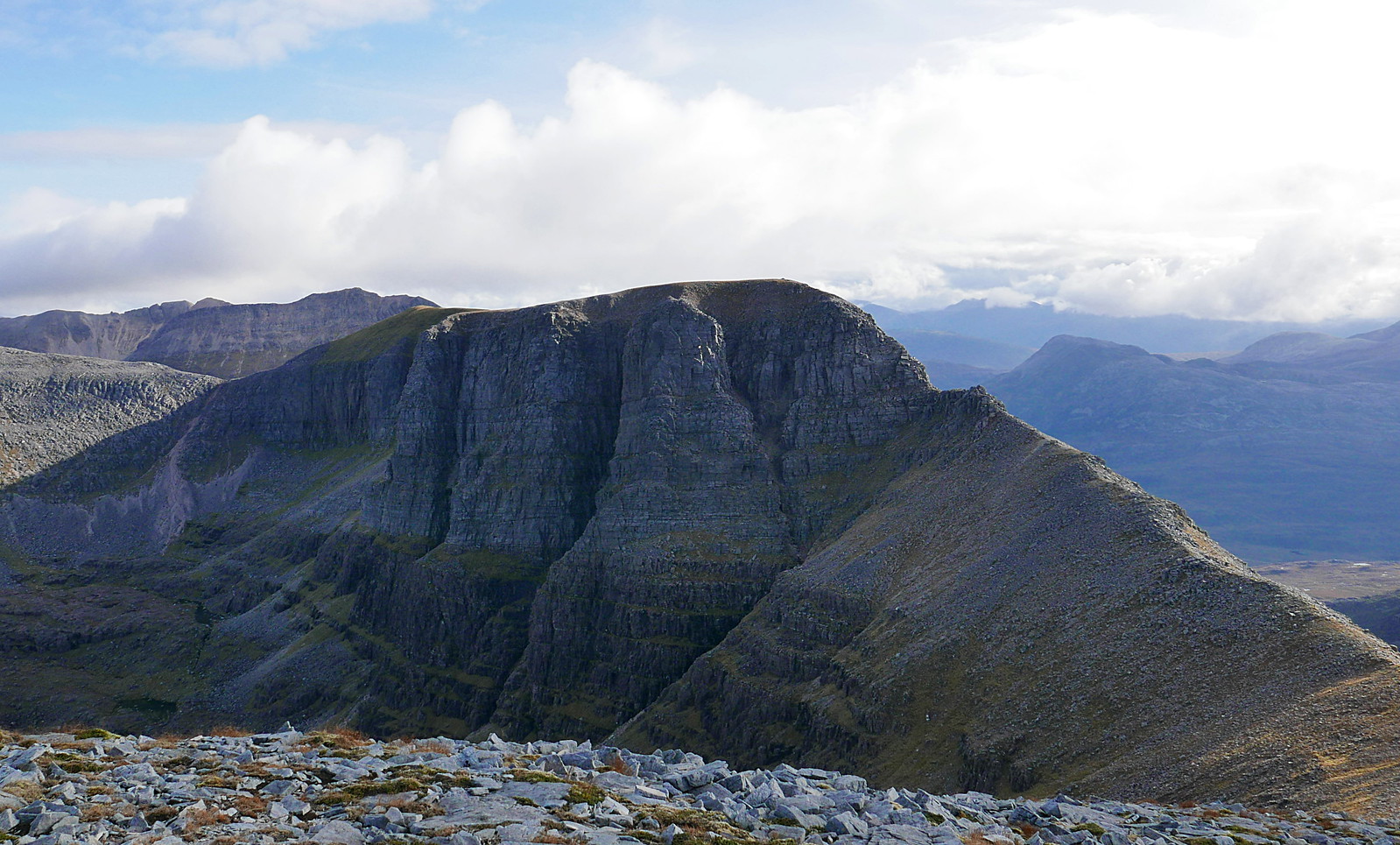 This was my first visit to Sail Mhor for more than 25 years, following a winter ascent of Morrisons Gully. I now had a pleasant stroll along the ridge towards the next obstacle, the rocky step called Ceum Ghrannda which blocks the ascent of Coinneach Mhor.

I could now look back at Sail Mhor: 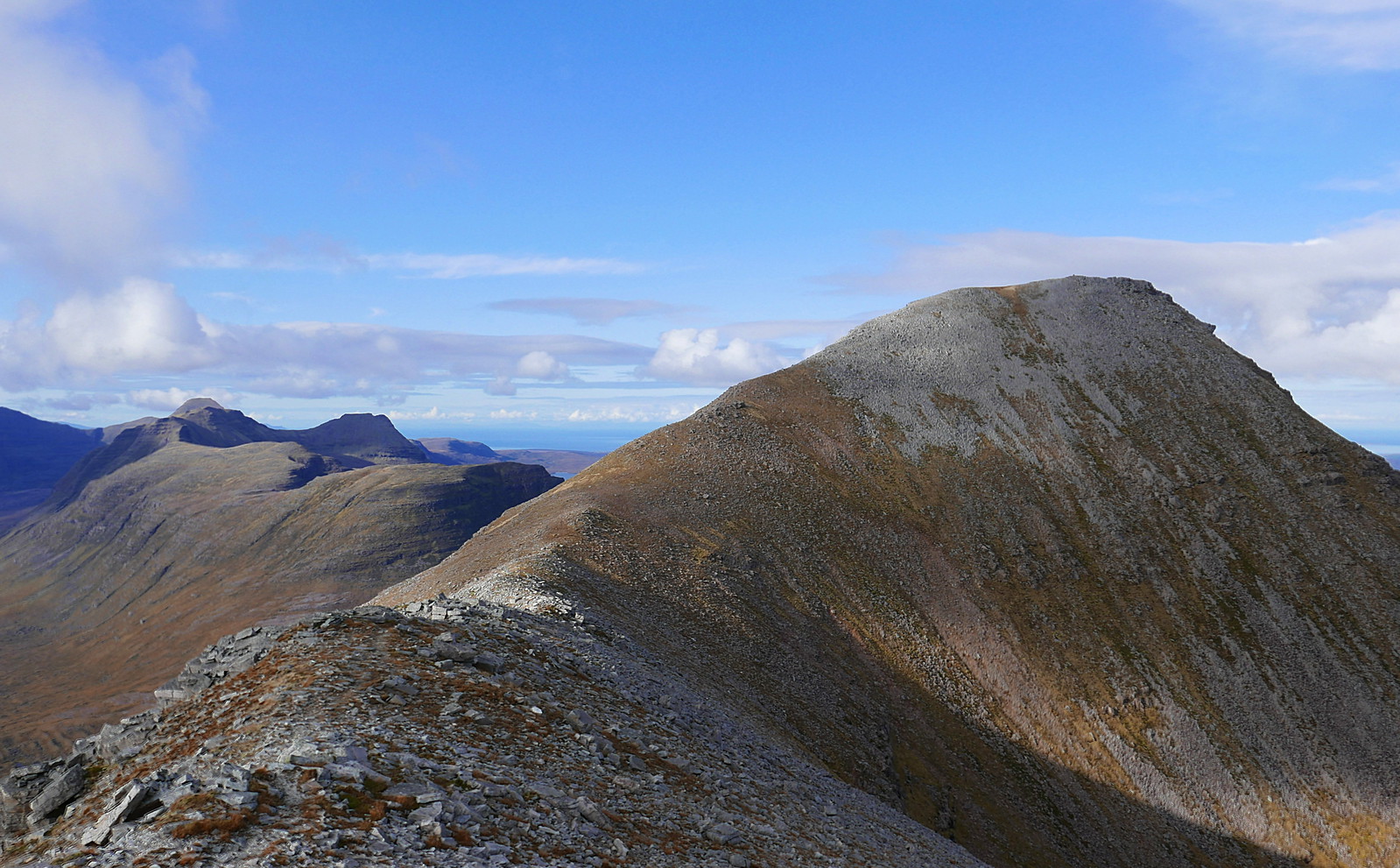 and see the Triple Buttresses closer up: 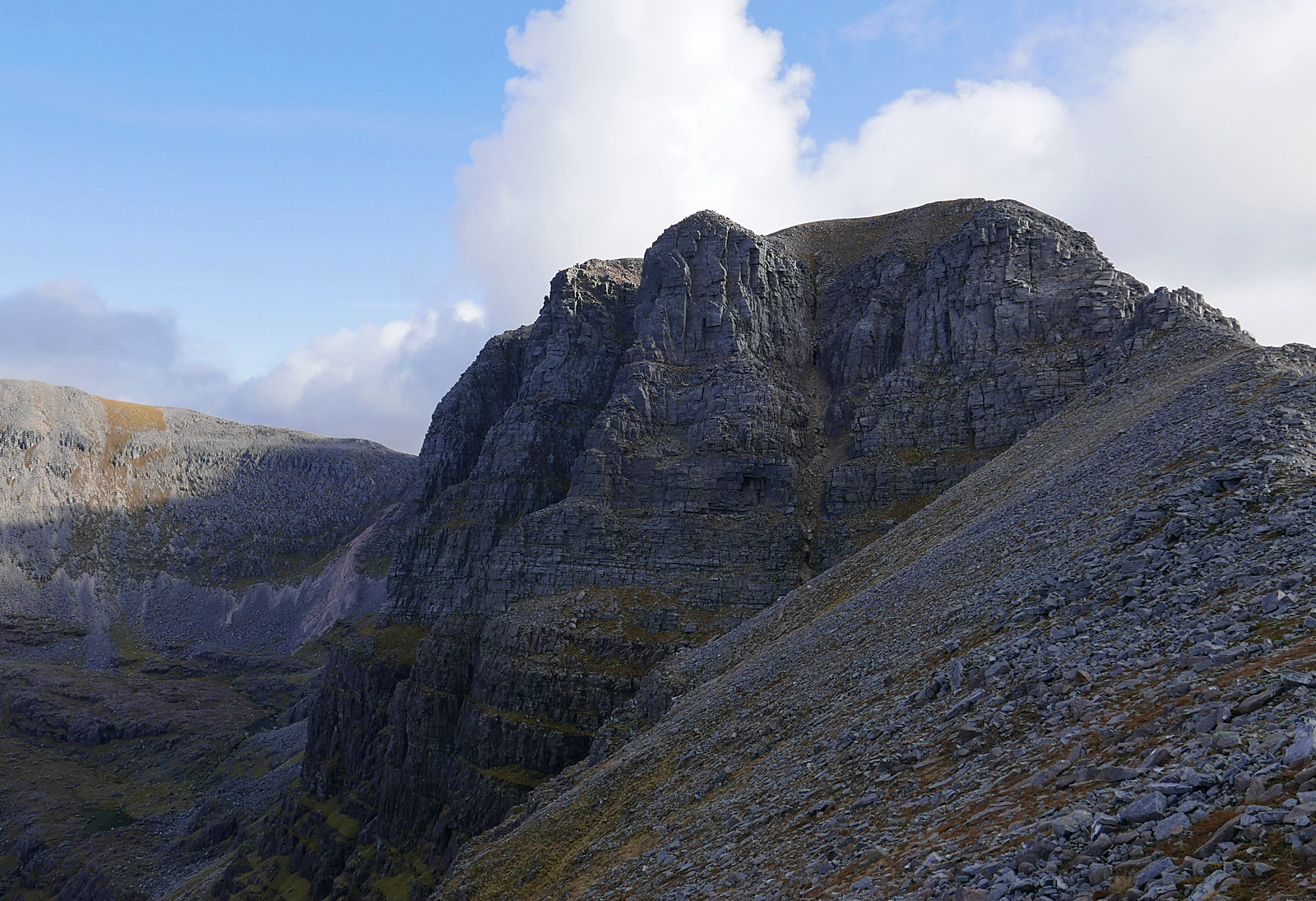 The East Buttress (on the left) is a great easy rock climb in a terrific situation. I need to come back and try the (harder) Central Buttress sometime.

After passing a cleft pinnacle, Ceum Ghrannda rears ahead: 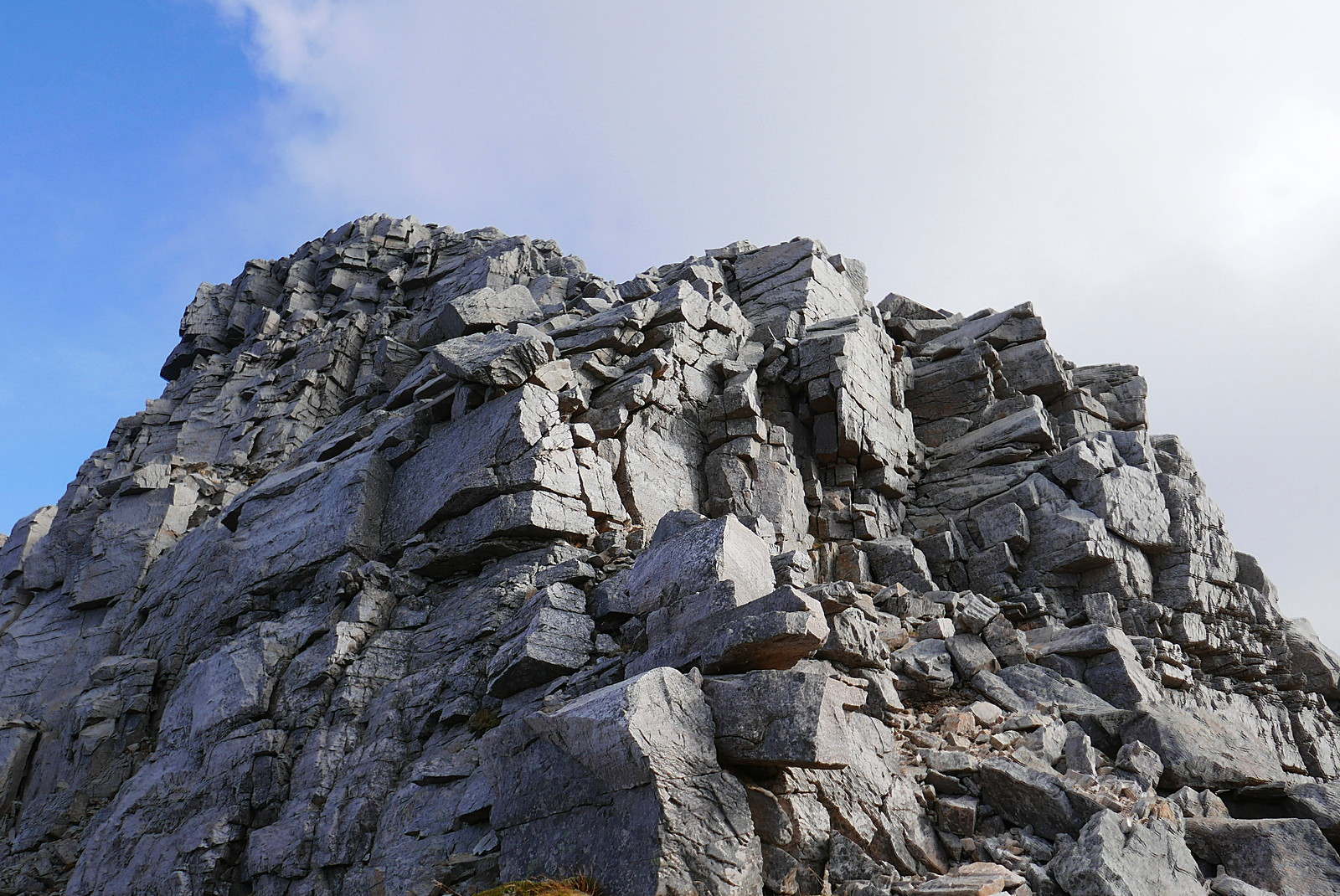 There is a choice of three lines here, but I opted for the middle one, steeply up into the shadowy recess and then the stacked blocks above on big holds. Next there is a short slab to climb before an easy final ascent to the cairn on Coinneach Mhor. Oddly, I don't recall much difficulty here on our winter visit - the step must have been well banked out with snow.

With the hardest scrambling over, I had my lunch on the summit, and then headed off again. The weather looked a bit less settled now, with clouds coming and going: 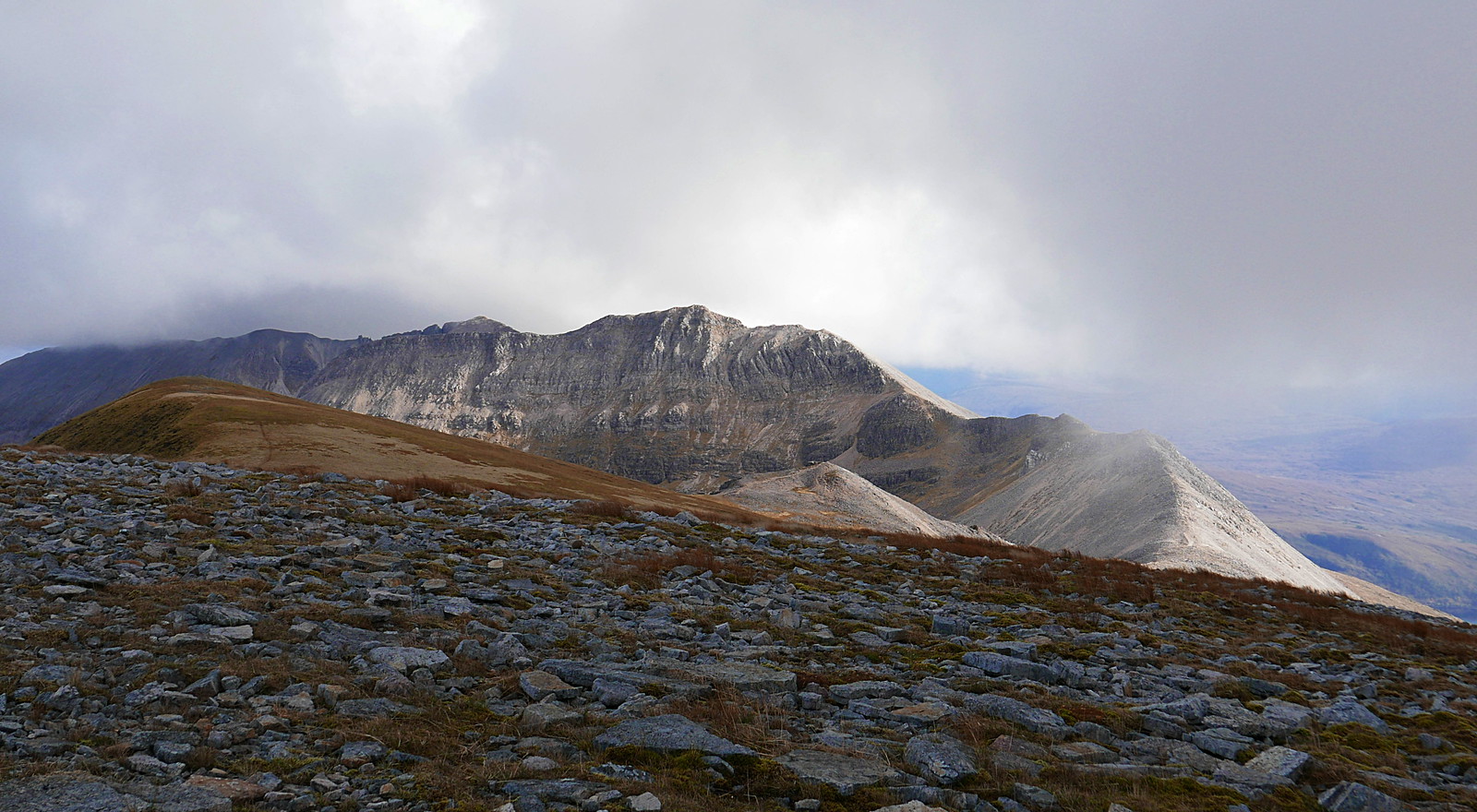 I had decided not to go out to Ruadh-stac Mhor this time: 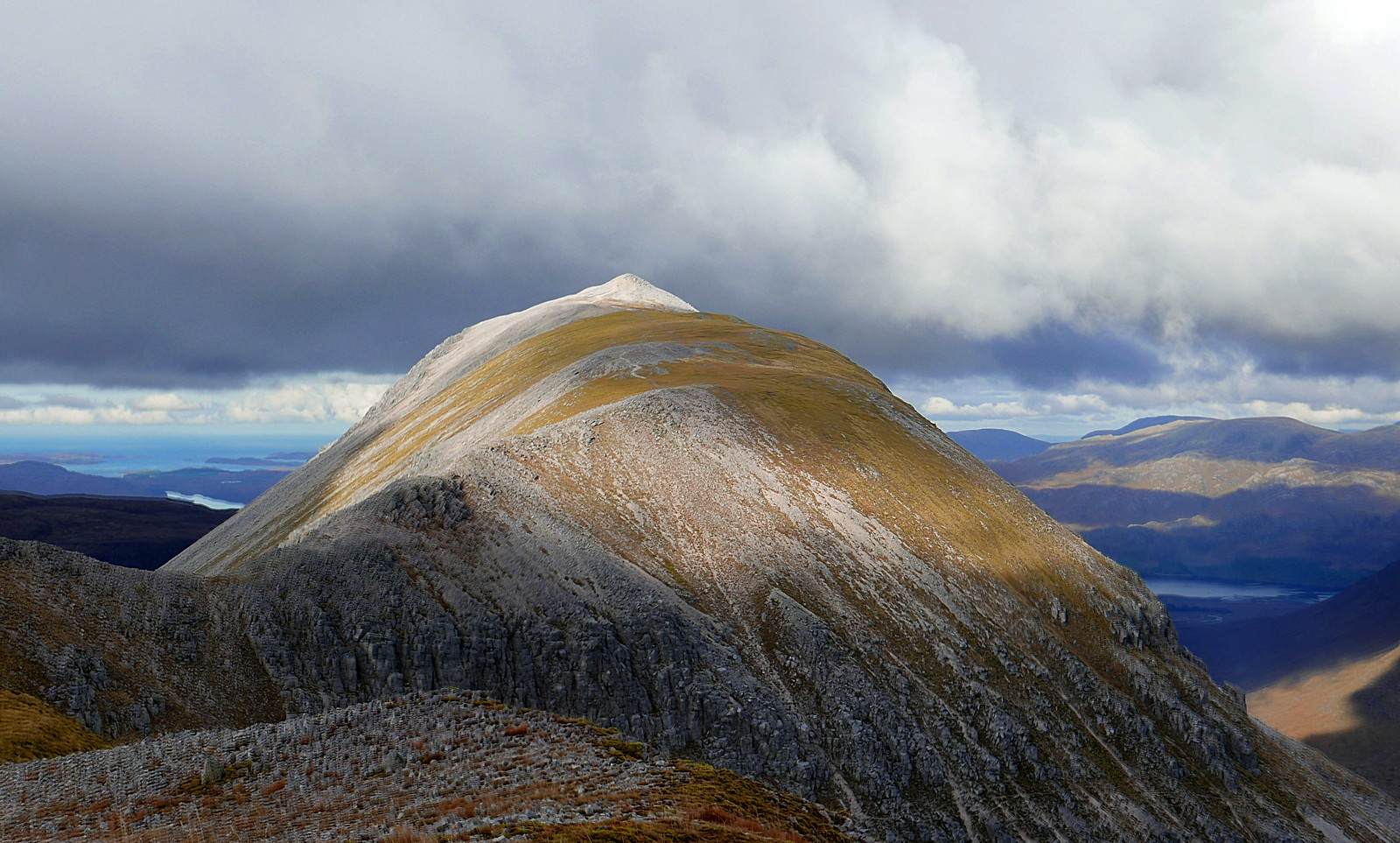 ...which was just as well, because the skies rapidly darkened and a sharp shower passed by just to the north, though I only caught a few spots.

I reached the top of Spidean Coire nan Clach in the cloud, but after a few minutes it cleared again. I returned to the trig point and then, instead of the taking the steep eroded path, headed over to Stob Coire and Laoigh, and down its east ridge. There is a bit more scrambling here - just a couple of easy moves really - before the angle eases and you can traverse across to the path in the base of the coire. Here there was a lone stag, who didn't seem much bothered by my presence: 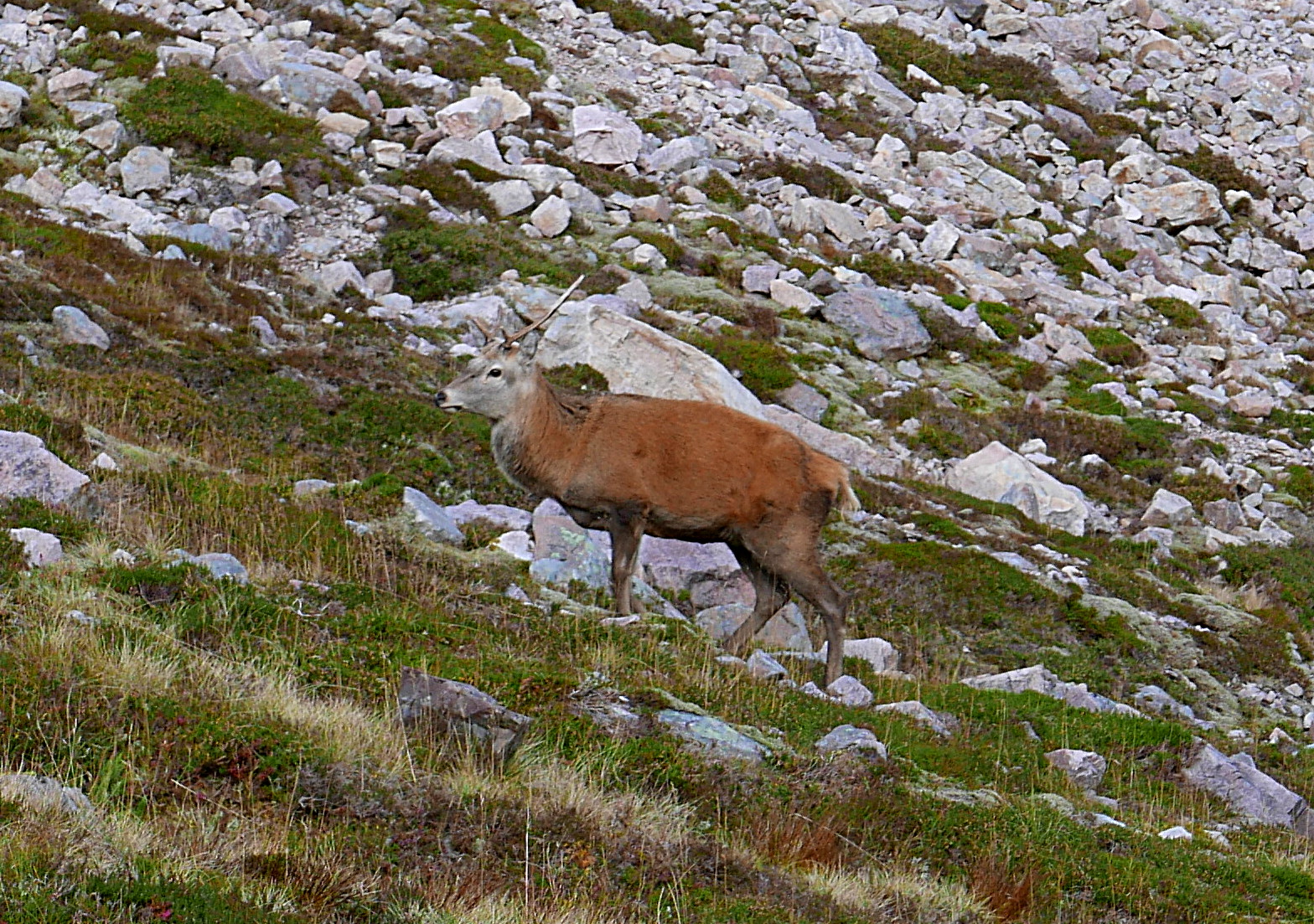 Another shower passed by to the south, giving some great lighting effects: 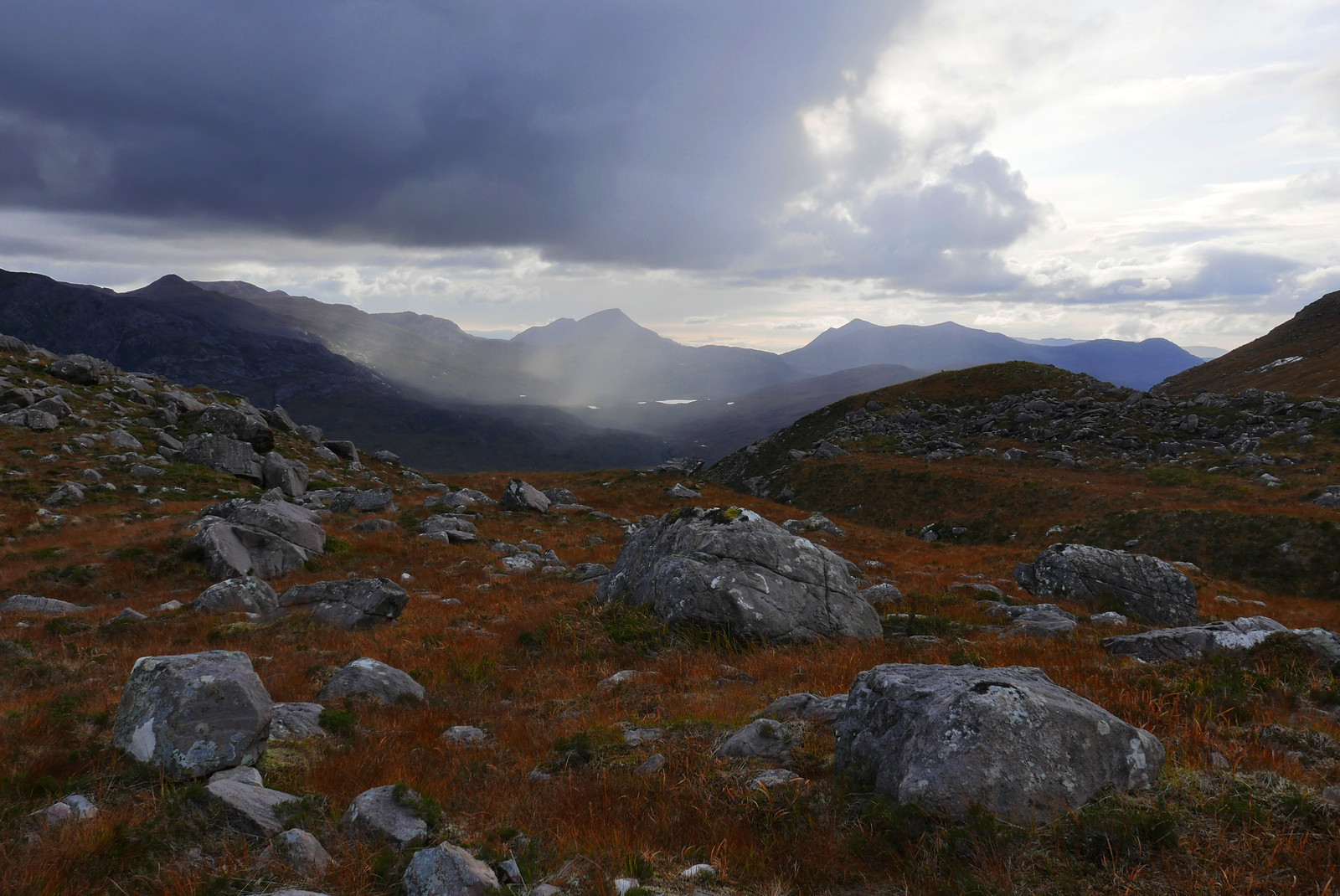 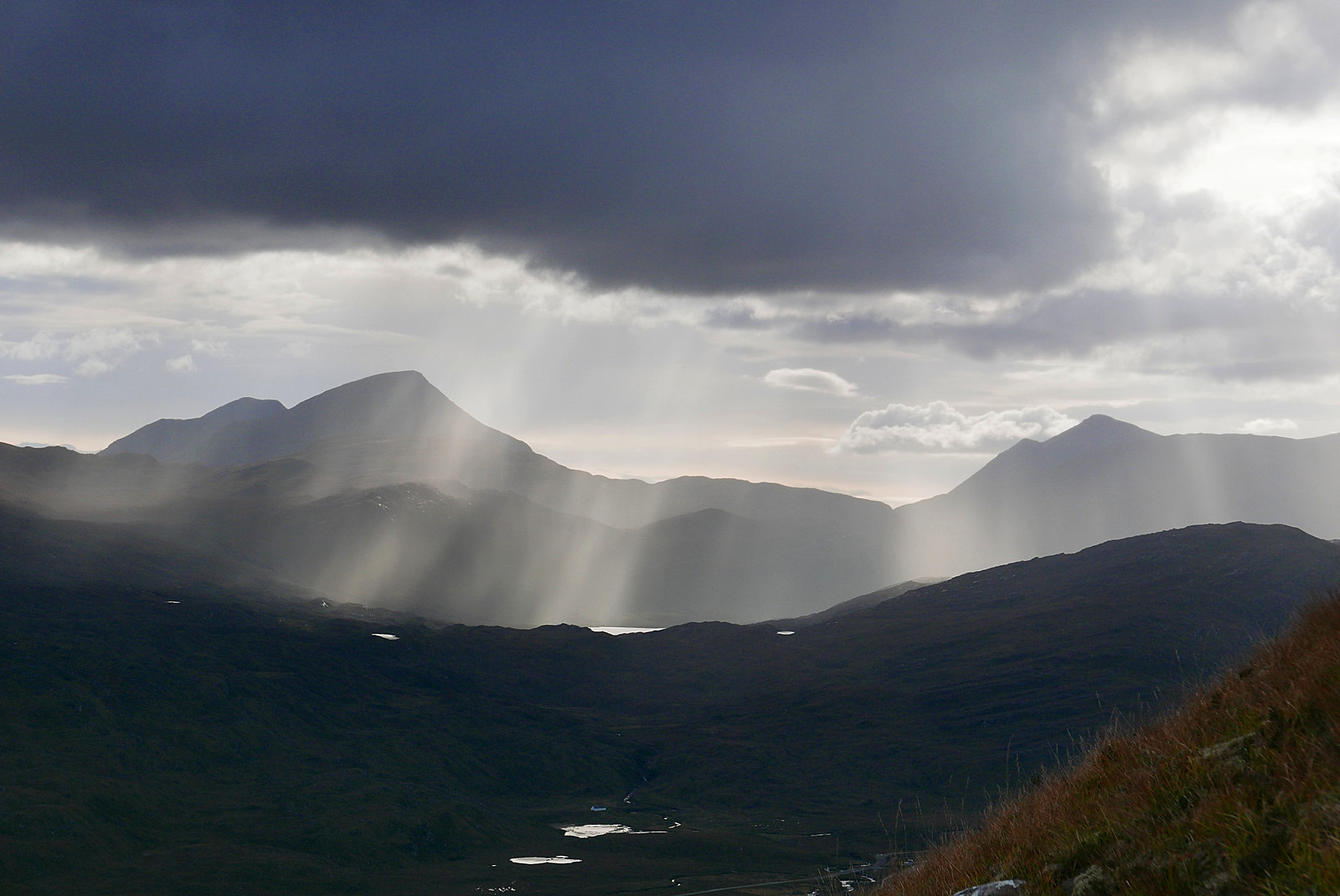 All that remained was a quick descent down to the car park, where my lift was waiting for me.
Click to mark this as a great report. Register or Login free to be able to rate and comment on reports (as well as access 1:25000 mapping).