It’s a long time since I’ve written one of these things – well, 3 years to be precise – where has the time gone? A couple of those years were, of necessity, a bit quiet on the walking front so now we’re trying to make up for it a bit. So, we had a few days away in early October and given a good forecast and a run of dry weather beforehand we though it would be good opportunity to get Baugh Fell under our belts. It seems to be the sort of hill that most people do only once, which seems to be all the more reason for picking the right day.

2016-10-09 Baugh Fell.GPX Open full screen  NB: Walkhighlands is not responsible for the accuracy of gpx files in users posts
So on a fine Sunday morning we parked up at the end of the minor road at Uldale where there’s space for two or three cars (and one space already taken). There’s a distant view of Cautley Spout from the starting point and the route starts with the tarmac access track to Uldale House. Shortly after passing the farmhouse, where five yapping sheepdogs in their pens gave vocal notice of our presence, a helpful pointer then signed the way up a steep bank for the path south-east to Grisedale. 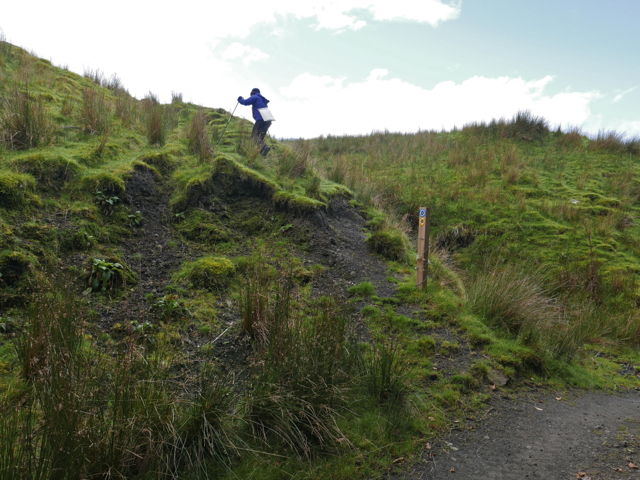 Turn left up the bank here

We headed up across a field where the rushes had been mown and a muddy stretch by Whin Stone Gill Bridge to reach the open access land. 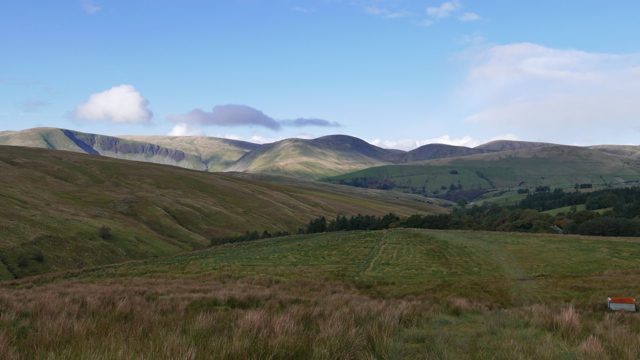 If there was now a decent path we lost it immediately and never found it again. The onward route is simple enough, following quad bike tracks and narrower trods at some distance from and above the river but it’s fairly squelchy going. At least it’s compensated for by nice views up and down the valley. 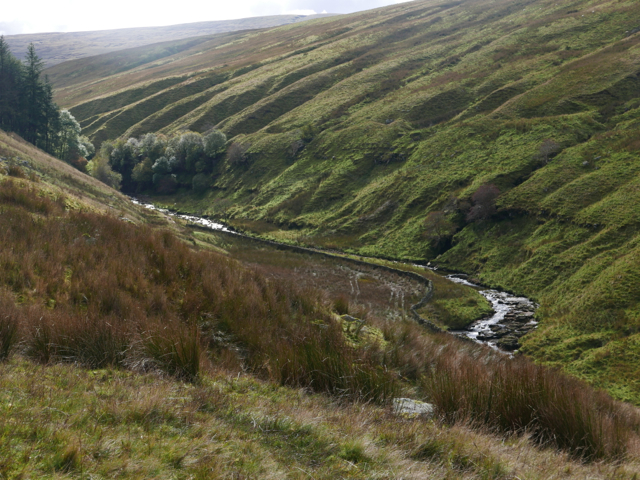 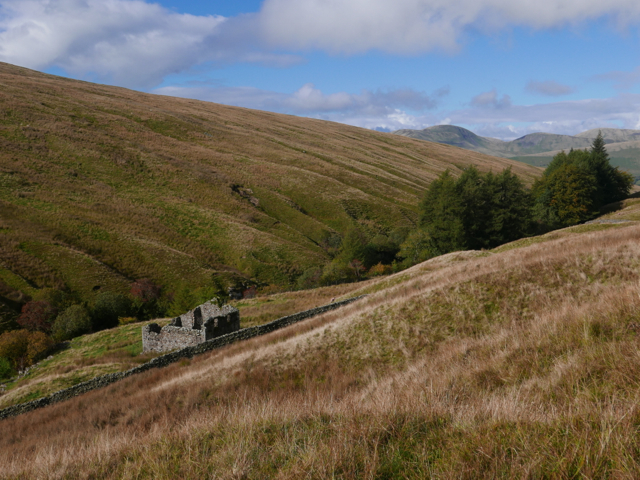 Ruin by the Rawthey

Evantually we dropped down to the river at the point where the wall comes down from Holmes Moss Hill and just beyond here there was a useful place to cross. Looking down the river from Rathey Gill Foot The start of Rawthey Gill - looking back to Wild Boar Fell

The next couple of hours were spent negotiating the twists and turns of the gill. This was at times delightful and at times frustrating. The Nuttalls write of sticking to the west bank throughout but I find it difficult to believe that anyone wouldn’t swap to the other bank if it looked easier. We must have crossed ten times or more although it wasn’t always obvious that we’d made the right choice – what looked good going for a short level stretch on the riverbank soon became less easy as the next corner was rounded and we found ourselves walking on the sides of our feet along trods which surely were too narrow for the sheep. At least with the water level so low the crossings were all straightforward. About half-way up we stopped by a small waterfall which made a nice lunch spot. Afterwards a short scramble up the right hand side of it got us going again. Further up a large round sandstone boulder looked very incongruous – it surely can’t have originated on this hill. Eventually, with the stream now most definitely smaller and quieter than when we set off we reached Gill Head and took the left fork and then the next right. The huge expanse of open moorland which then opens up came as quite a surprise after the claustrophobic nature of the ever narrowing gill. The East Tarns were on our left and the rest of the top seemed to be a patchwork of grass and red sedges and areas of bare peat and stones. We picked our way through this to get to the Hewitt summit of Tarn Rigg Hill where the view ahead to Whernside, with Ingleborough behind, is the main attraction. It was here we spotted, in the distance, the only other walkers we would see that day. It was an easy walk from there, following the wall, to the trig point of Knoutberry Haw and the next section northwards to West Baugh Fell Tarn was easier still. This was by far the fastest section of the day and one of the most enjoyable - level and dry with a small path to follow. The rock isn’t isn’t far below the surface here so there’s simply not enough peat or vegetation to hold up a lot of water. Except of course for West Baugh Fell Tarn Unfortunately the decent route degenerated fairly quickly into tussocky grass and rushes. This was a bit of a slog and it seemed to get worse the lower down we got. We aimed for the white house in the distance (New House on the map) but even so, dropping down to hit the track to Rathey Gill Quarry was unpleasantly steep at the end of the day. (I guess there may be some merit in continuing in a bit more of a NNW direction and then looping back, just to make the gradients a bit easier, but I’m not planning to check it out any time soon.)
Down by the river the beeches were starting to put on their autumn colours. All that remained was to cross the wooden footbridge, take a last look at the Rawthey cascades and head up through the trees to join out outward route. Back down to the river Although a bit tough going on the way up and the way down which is mostly pathless, the top of the fell was much easier going than I had expected. It does need a clear day though to make the most of the expansive views.
Click to mark this as a great report. Register or Login free to be able to rate and comment on reports (as well as access 1:25000 mapping).

A bag of M&Ms (Mickle and Murton Fells)