The Witches T*t and the Boar of Lochaber (Grey Corries)

My previous attempt at the Grey Corries finished before it had even began with a night of 'stomach issues' in the Bunroy campsite prior to the planned date so I was itching to get back up north after the Ben Alder 6 to crack them (and also to try out my new camera!).

). So back up the A9 we went and driving along Loch Laggan I pointed out Stob Ban saying that would be the first Munro. "Oh you mean the one that looks like a witches t*t?" she said. I had to agree as from this angle it did look (what I would imagine to be!!) a bit like one. My gaelic is not strong but I would guess that Cioch na Cailleach is a rough translation for the OS map people?

We arrived at the campsite to be asked the question "Have you booked?", "No, is there a problem?" I said. "Well, the World Cup Mountain Biking is on at Aonach Mor this weekend so we're full". A little bit of humming and haa-ing later and she smiled and said "Och, you're here now, on you go - you've been here before haven't you?" (pretty good as the last time I spoke to the owner was last Oct!) http://www.bunroy.co.uk/ by the way!

So we pitched the tent and got the BBQ on and the wine out. Several cremated sausages and a fab potato salad later we headed for high ground to get a mobile signal (the Stronlossit Inn strangely enough) before climbing into our doss bags at 11pm.

We were up, fed, watered and away in glorious sunshine by 8:30. The road up to Coirechoille Farm from Spean Bridge is pretty good until you turn off the main drag and onto the track. The track is nowhere near as bad as some folk make out (especially if you are driving your wife's car

) - just a few potholes to avoid and a gate to open/shut (thanks pet) and before long you're at the parking spot.

We set off roughly at the same time as a group of 4 (who we continued to pass/be passed by for most of the day) and after an hour and a half of easy walking up the Lairig Leacach, passing the Innse's, the bothy came into sight along with Cioch na Cailleach. After a quick stop for a bite to eat and replenish the Platypus's we headed off up the east ridge of Cioch na Cailleach following a pretty good path. It didn't take long at all to get up to the minor top to the east of the summit and the views all around were glorious. The last bit up to the top looked quite steep but again, the path was good and soon we were on Cioch na Cailleach with the whole ridge spread out in front of us. We had agreed before the walk that Sue could call it quits at any point but even looking at the descent and ascent up to Stob Choire Claurigh didn't put her off so after a quick sarnie, drink and boiled sweetie we headed off down the dreaded scree to the bealach. Actually it wasn't that bad but I'm soooo glad we hadn't come up that way as it would have been 2 steps forward and 1 step back. 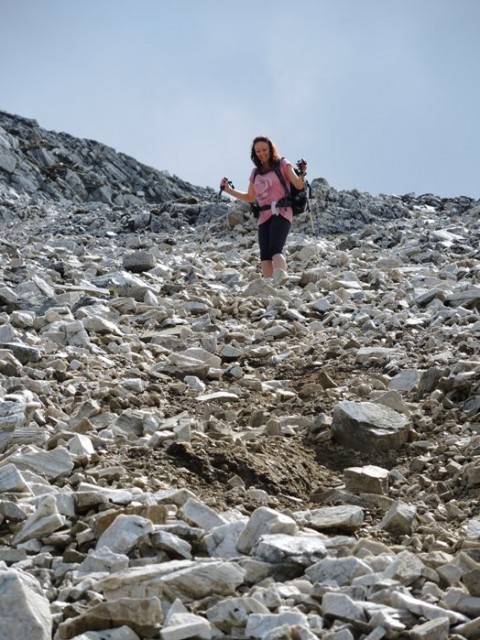 Sue at the lochan

But we had a ridge to do so we set off up Stob Choire Claurigh, following a faint path as we went. A lot of descriptions reckon this is a fair old pull but we found the climb pretty easy. It got a bit bouldery higher up and the last bit onto the summit, well, we just had to find our own way as the path pretty much disappeared into the boulder field. The views from the top were amazing and we could see for miles. Photos were taken and fuel taken on again before we set off. Sue by this stage was not for quitting as was really enjoying the walk. Me on Stob Choire Claurigh So we headed off west along the ridge, again on a good path with the odd bouldery section and Stob Coire an Laoigh off in the distance, our next objective. Sue on the ridge Looking towards Stob Coire an Laoigh

The ridge was great and we never felt as if we lost much height at all and the ascents were minor in the extreme. I'd love to come back and do this ridge in the winter too! It didn't seem long before we were making our way up the last bit of Stob Coire an Laoigh and the 3rd Munro of the day. The views from here just got better and better with the Mamores close to hand along with the Aonachs and the Ben. I had an idea once to do the Grey Corries and the Aonachs in one push and I reckon if I'd been on my own I probably would have gone for it as the weather was so good and the legs were holding up too. The climb up to Aonach Beag would have been a killer and the descent off Aonach Mor a bit steep but it would have been a classic traverse! Anyway Sue was starting to feel it in her legs by this stage and we agreed that she would wait for me on Stob Coire Easain. She'd done brilliantly bearing in mind her last Munro was Aug last year so hopefully with a bit of luck she'll get the bug again

We dropped off Laoigh and headed up blocky ground to Easain where we parted and I headed off to Choinnich Mor. I was following the ridge down and kind of keeping an eye on a chap in front of me when I came to a section that I thought looked a bit interesting. I noticed the other walker had dropped off the ridge to the right so I assumed he was bypassing a 'bad step' so decided to follow him down a rough a steep blocky section to the bottom of the ridge. Looking back at where I thought the 'bad step' would be I could see a perfectly easy ridge (ok hands out of pockets but straightforward) so no bypassing on the way back! Looking back up the ridge to Stob Coire Easain (a skoosh!)

From the bealach, Choinnich Mor looked a bit of a climb with no clear path really visible. Sgurr Choinnich Mor from the bealach

So I headed up the old snow patch taking the opportunity to dig out some snow and giving my head a good wash with it to cool off. It was a bit of 'head down and get on with it' to get to the top of the snow but once there a perfectly good path made its way up to the last section of ridge. The guidebook talks about fissures on the ridge of Choinnich Mor and the fact that they present a real hazard to walkers in winter conditions as they can easily be covered over with snow. I found said fissures (unfortunately did not take a piccie) and let me tell you these are a serious risk indeedy! I would guess they must be 8 foot plus deep and wide enough to let a whole person in. A real danger if bridged by snow as they are slap bang in the middle of the route up. Take care winter folk! Too soon and the last bit of ridge was on me and it was a simple walk to the tiny summit. Once on the top it was photo time again and grab a bunch of Haribo Starmix (my fav!) before heading back to Easain and Sue. You can kind of make out the resident raven on the Choinnich ridge in the pic below. It quickly swapped places with me when I left the top to see if I'd left any titbits - sorry mate - I didn't! Looking back upon the days efforts

So back down to the bealach I went with a good bumslide on the snow to boot before heading back up Easain's west ridge, this time staying on the crest - so easy and fun! Near the top of this I bumped into the group of four on their way to Choinnich and had a quick chat before heading up to the top as I knew Sue would be waiting (and according to the group was, A LITTLE BIT CHILLY

We didn't hang around and were soon heading back down to the forest via Beinn na Socaich. Looking back up Beinn na Socaich

This descent seemed to take ages and it didn't help when my water ran out half way down. Eventually we made a bee line for the dam over the Allt Chiomhlaidh and the ground got steeper and steeper before quite literally dumping us in the burn just before the dam (the book says cross before the dam and it is right btw!). We took the opportunity to splash our faces and fill up the water bottles before heading off down the track. I was quite tempted to have a dip but time was getting on and we were getting hungry! Shortly after the dam we crossed the line of the old tramway and another walker we'd shadowed on the way down came crashing out of the trees muttering something about going the wrong way. He headed off along the tramway and we went along the forest road back to our respective parking spots. The old tramway in the Leanachan Forest

A few hundred yards further on into the forest Sue suddenly stopped and said "What on earth is that?!" (or words to that effect

). About 100m up ahead we could see a wild boar sow with 2 piglets snuffling away at the side of the road. I reached for my video camera and turned round to see Sue heading for the nearest tree! I got a few minutes video footage of the three of them before we decided to make a bit of noise and let them know we were there. Once the mother spotted us she promptly ushered the 2 piglets along the track away from us. We followed them for about 500m before she disappeared into the forest. I managed to get 2 pics off the video footage and have posted them here http://www.walkhighlands.co.uk/Forum/viewtopic.php?f=3&t=32876 . Eventually we made it back to the car to reflect on a truly fabulous day in the hill with the bonus off seeing some unique wildlife. My camera headaches were now over too as the pics that it took came out really well - it's a pity that compressing them here takes away the quality as they look fab full size (Nikon P7700 by the way)

We bumped our way back to Spean Bridge and the Spar for some liquid refreshment then headed off to Caol and Sammys chippy for 2 haggis suppers....deeeeelish!!!!! http://www.sammysfishandchipshop.co.uk/

Next day we packed up slowly and went home via the Clachaig for lunch. I was saddened to see that Allt na Ruigh in Glencoe had been graffitti'd again - such a beautiful spot wrecked by someone who thinks that kind of behavior is somehow warranted because of the actions of the previous owner. No need for it IMHO, the house did nothing wrong!!!
Click to mark this as a great report. Register or Login free to be able to rate and comment on reports (as well as access 1:25000 mapping).


Half dozen round of Ben Alder for first post