That'll teach me. Desperate for any new walk, I decided I wanted to circumnavigate Banton Loch near Kilsyth despite the fact I couldn't find anything on the net to say it could be practically done. No site listing it as a family walk or really much mention of it at all really. Man made to supply water to the Forth and Clyde canal, it had been there for a long time in a relatively populated area so surely paths had been formed over time. I had been at the south western side of the loch with my wife the week before and knew there was a path following the south shore from Colzeum to Banton so I thought surely there must be a path along the northern shore that would meet up at the eastern end. Look at closely at a map? Don't be daft. It's just a walk in what's practically a part of Colzeum House country park

.
I parked at the entrance to Colzeum House and set off. (in summery shorts😁)
All went well. On quickly reaching the west end of the loch I found a path heading along the northern shore right enough👍. This was enough to confirm to me my circumnavigation would be OK. This'll work!! Even here though there was evidence of irresponsible wild camping. 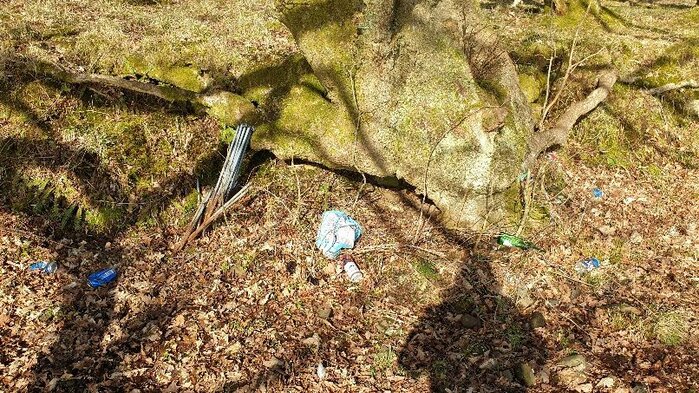 Rubbish at the lochside.

Unfortunately though
this path petered out in a bog about 2/3s along. At this point it would probably have been wise to have said to myself, "maybe not" and retraced my steps and settled for a saunter up and down Colzeum Glen. But no, I ploughed my way through the bog then gained higher ground to get a look at the Kilsyth Hills, then descended down on to the stoney shore which itself was very spongy. Eventually I made it to the end of the eastern end of the loch which was very boggy indeed. I got the impression that at a different time this part would probably be under water. I picked my way toward the far side of the loch where I hoped I would now just have to find a way to connect to the southern path about 50 metres away, on which I could see a couple walking. Easy peasy.
Only one problem. I hadn't looked at a map, which would have told me there was a fast flowing stream (Banton Burn) between me and the path

.
Not willing to turn back, there then ensued a trek through knee high rush like plants, a hack through woods where my hands and legs were scratched to bits, several bogs, clambering over fallen trees and navigating over slippery rocks as I hugged the edge of the stream, across a farmer's field, all in an effort to cross the burn, which I didn't manage to do till I reached the village of Banton🙄. I disturb a flock of geese.

I had more scratches and scrapes than I've had in a year's worth of Munros😅! Banton and the daylight moon.

I then walked past and missed the beginning of the return path on the other side of the loch, and ended up walking back to the main road then back to Colzeum.
Can you walk "round" the loch? Well I suppose I did in a way. But is it a practical family walk? Definitely not🤣!
Click to mark this as a great report. Register or Login free to be able to rate and comment on reports (as well as access 1:25000 mapping).

Wasn't Sure If I Would Be Doing This Again.