This walk was well and truly a walk of two halves! As always, I tried to see the optimistic side to the weekend MWIS forecast and decided to set off for Glen Affric. I arrived at the relatively new Chisholm Car Park at a later than usual 10am. Placing my trust in the MWIS gods, I was hoping the taps from above had been turned off but was met with glen-level clag and relentless drizzle. 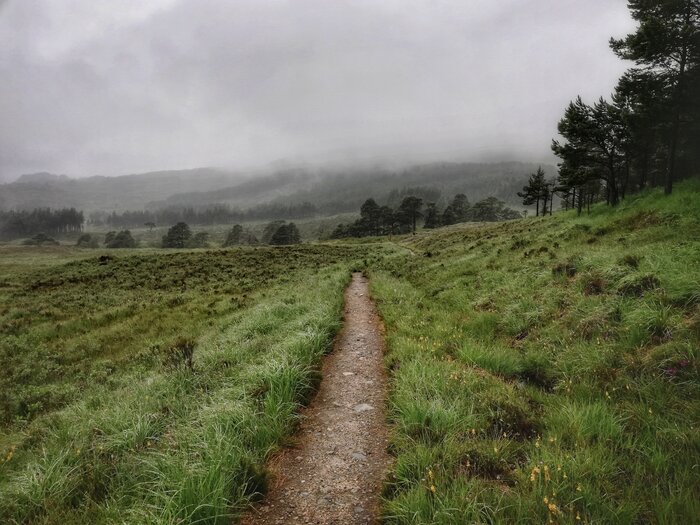 I set off from the car park and met the hydro track after half a mile. I turned right and carried on up the glen. After reaching the dam, I continued on for a bit and then turned right off the path just before Allt a' Choire Odhair. From reading previous reports, I expected it to be a bogfest but thankfully the going was pretty steady. After an uneventful ascent, I reached the first munro of the day, Tom a' Choinich, just under 2 hours after leaving the car park. I didn't stop for too long on top as views were non-existent. 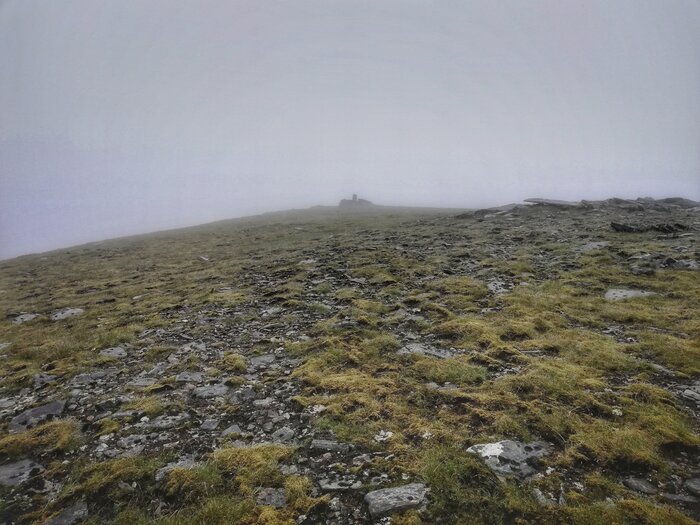 Summit views of Tom a' Choinich

Careful navigation was needed in the clag to get down to Bealach Toll Easa at 872m. There was no let up in the rain, which made for a rather unpleasant ascent of the zigzag path up the srón to the second munro summit of the day, Toll Creagach. Again, in keeping with the theme so far, there wasn't much to write home about in terms of views due to the clag and drizzle. It had taken roughly 1 hour to reach the summit from the previous summit. 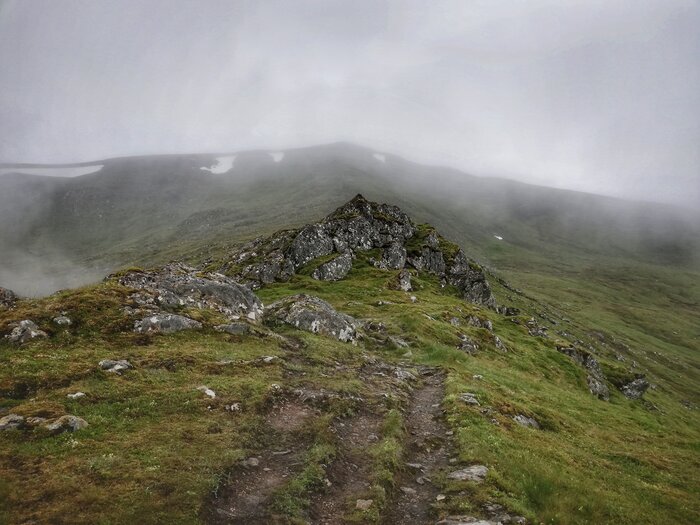 Regardless, I still held hope that the weather would clear, so I carried on along the path in a westerly direction to try bag the neighbouring three munros. It turned out to be a real slog getting over the big lumps of Tom a' Choinnich Beag, An Leth-chreag, and Srón Garbh. However, once over the sron, I was met with some respite in the form of a high level plateau. The clouds had now begun to lift and the rain had stopped. I took encouragement from being able to see what lay ahead. Negotiating the pinnacles of Stob Coire Dhomhnuill was uneventful by using the path which skirted around them. It had taken me an hour and a half to reach the summit of Carn Eige from Toll Creagach. 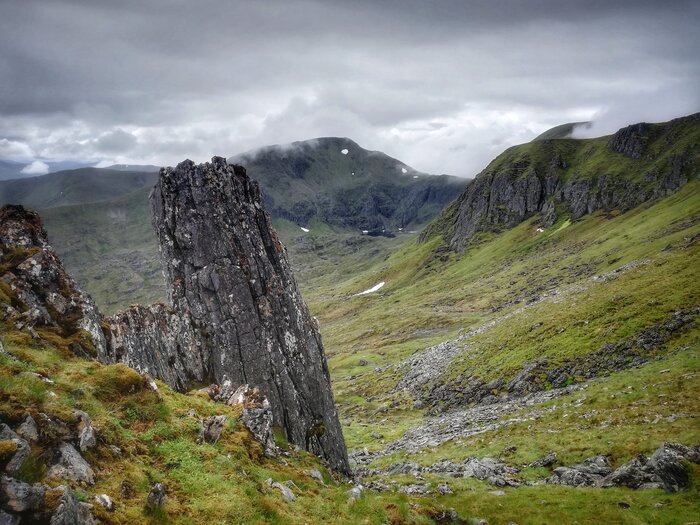 Weather improving at the pinnacles

I then carried on in a roughly northerly direction towards the lonely peak of Beinn Fhionnlaidh. I was grateful for the stunning views overlooking Coire Lochan and further on to Loch Mullardoch. The ascent up Beinn Fhionnlaidh was really energy-sapping. Once on top, I caught my breath while admiring the Mullardoch munros which are hopefully next on the list to bag. 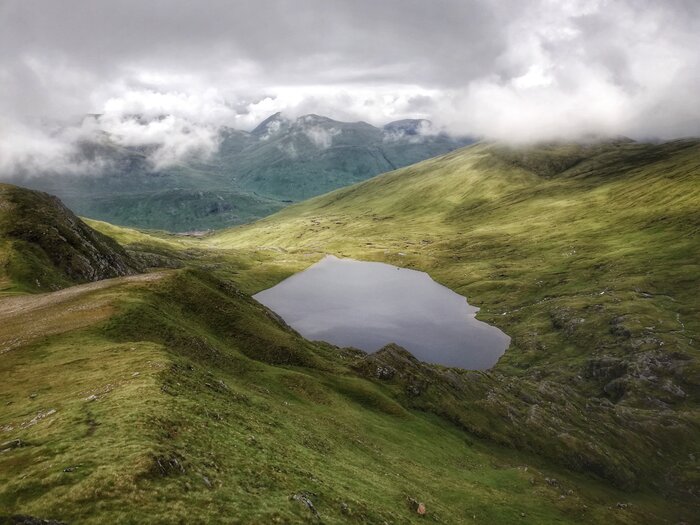 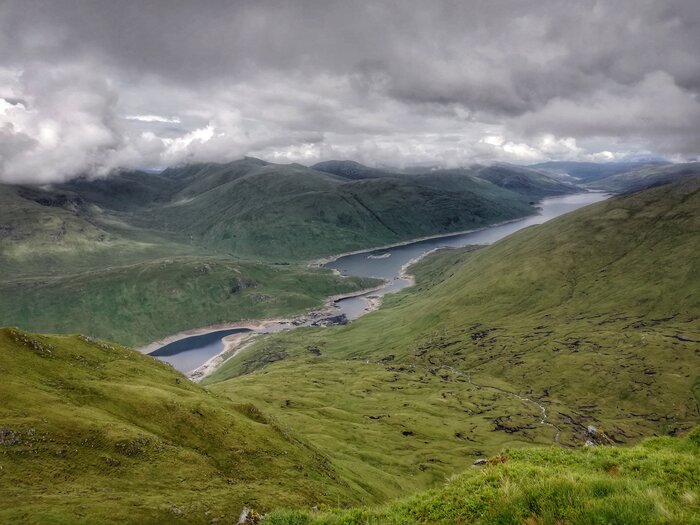 I returned back to the Bealach Beag at 832m and followed a track to the west of Carn Eige, just below the scree. The track eventually petered out, so I kept an eye on the high level bealach between Carn Eighe and Mam Sodhail and roughly aimed for there. I joined a path just before the bealach and carried on up to the impressive summit cairn of the final munro of the day, Mam Sodhail.

I now had two options, either follow the stalkers path south, then south east into the valley below, or trace the ridge to the demoted munro, Sgurr na Lapaidh. Given that the walkhighlands report notes this may well be reinstated as a munro in future, I had serious FOMO so decided to carry my aching legs down the ridge. The views down to Glen Affric were a joy and definitely made up for the misery of the first two munros. 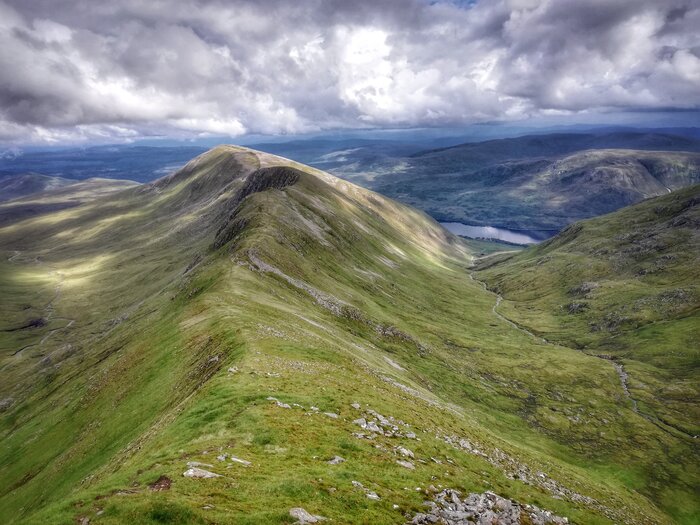 The descent off Sgurr na Lapaidh was fairly straightforward (except for the boggy quagmire between 500m and 600m!). I was grateful to reach the land-rover track and snake my way down to the glen floor. The walk back to the Chisholm car park was uneventful and I eventually reached the car park after 9 and a half hours of walking.
Click to mark this as a great report. Register or Login free to be able to rate and comment on reports (as well as access 1:25000 mapping).