I think it's fair to say that the three munros which form part of the Rough Bounds of Knoydart have a justified reputation as some of the most rugged and challenging on the list. I have studied various approaches to these for some time, one of which was (and may yet prove to be) coming in from Loch Quoich by kayak. My reasons for this were twofold: 1. The walk is shortened considerably, and 2. I could avoid driving the 14 miles or tarmac lunacy that comprise the Loch Arkaig road. As it happened an opportunity to do these presented itself at the Munro Meanderers summer meet, taking place at the excellent Saddle Mountain Hostel. I'd also recently learned that a mountain bike could be taken through a couple of forestry sections for around 5 miles each way.

) to leave Forfar on Friday morning to arrive at the end of Loch Arkaig early enough to get a space in the perma-busy car park, do the round then arrive in good time at the hostel to see everyone again and doubtless obtain a miserable hangover off a paltry 4 beers and 2 gins (as usual). However Friday's forecast got progressively more ridiculous and I didn't fancy being on that ridge with gales and horizontal rain. However Saturday looked good so I went for that instead. However i still went to the hostel, met everyone and got a hangover off 4 beers and 2 gins. Tremendous stuff.

Anyway, I set off at a ridiculously early hour for the dreaded drive along to the end of Loch Arkaig. The morning light on the way was beautiful. I stopped for a quick shot of Loch Lochy from it's western side. 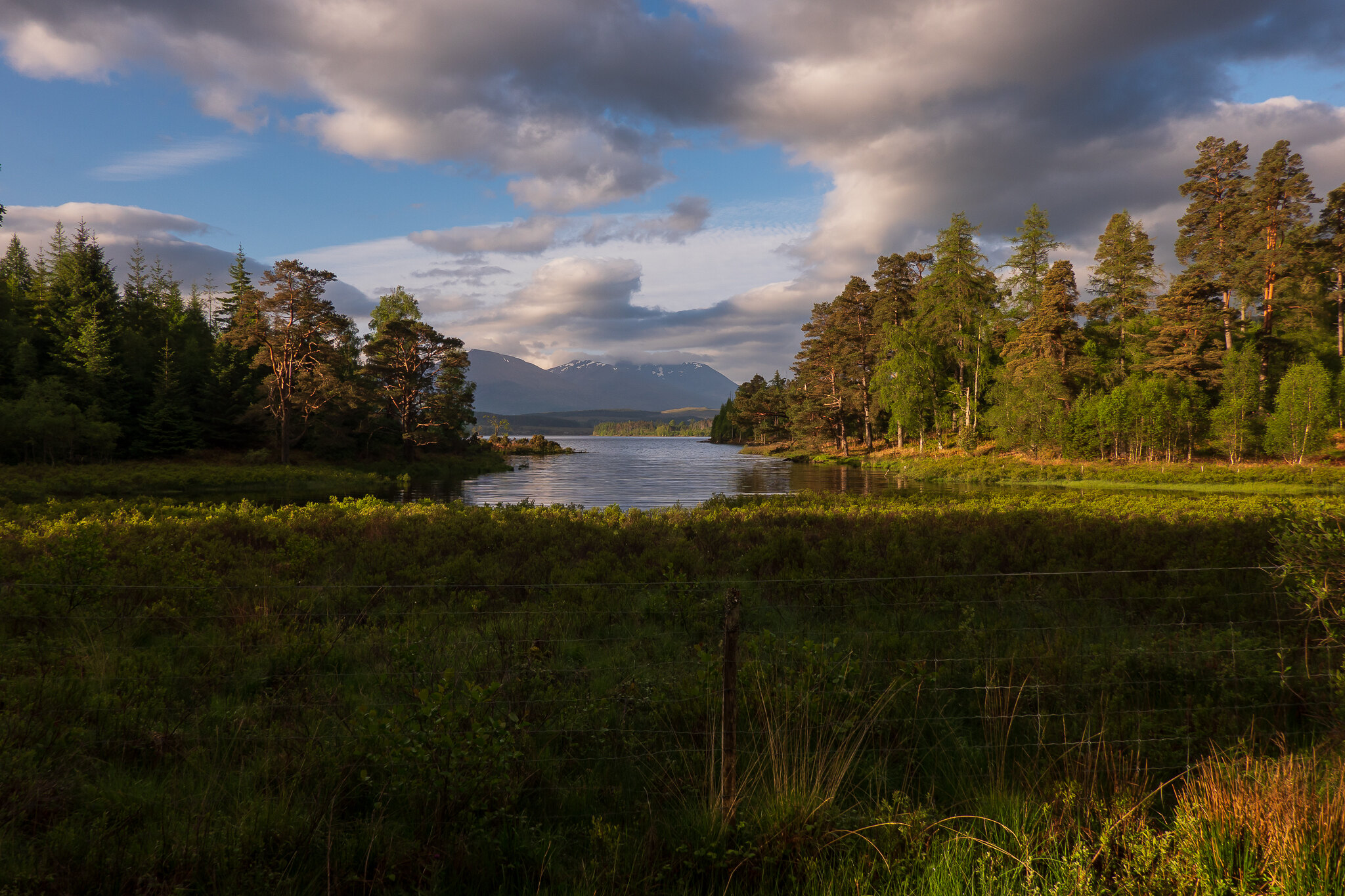 The Arkaig road wasn't as bonkers as I'd expected, but still long and a bit annoying. That said, one of the roads higher points gave a tremendous views west into Glen Finnan. 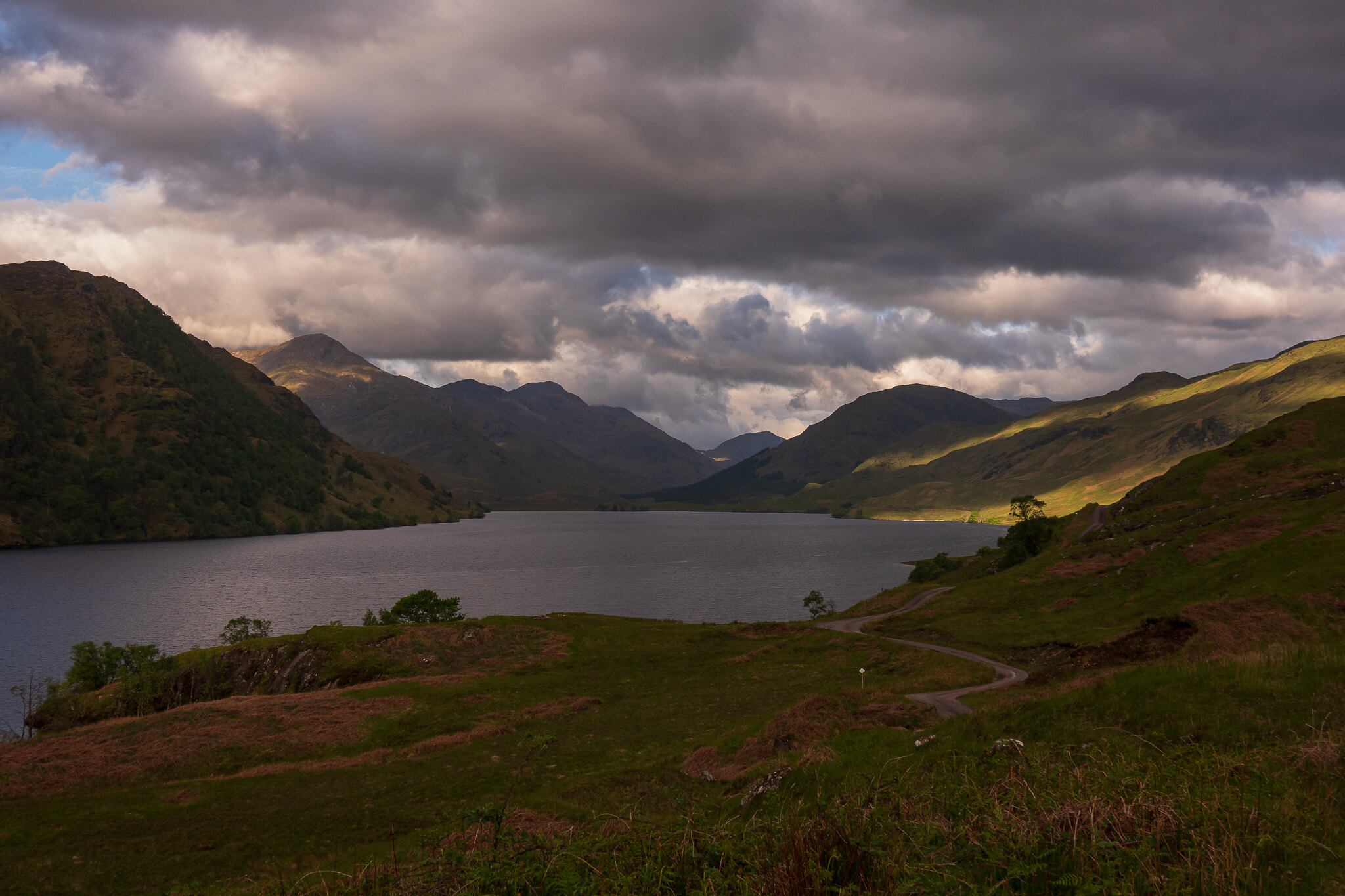 Shortly afterwards I arrived at the car park and neatly nabbed the last available space. I got chatting to the chap next to me, a lad called Wayne who was on an extended trip from Nuneaton around Scotland in his campervan. We discovered we were total Alpkit fan boys and decided to cycle in together. The cycle isn't too bad - mostly on decent, if a little muddy forestry track which soon reaches A'Chuil bothy before a worrying loss of height to the next forestry section where we dumped the bikes, but not before giving a poor guy the fright of his life mid-p**h

The best place to leave the bikes is at a rickety-looking bridge (the track continues through the forest to the left but is a total quagmire). Cross the bridge instead which quickly heads north to reach main path from Arkaig to Sourlies.

Wayne and I parted at this point as he wanted to get into Coireachan first. My plan was to get the long walk done first and head to Sgurr na Ciche, handily also taking the gully of Feadan na Ciche in ascent instead of descent. This long section was extremely boggy in place, but beautiful. 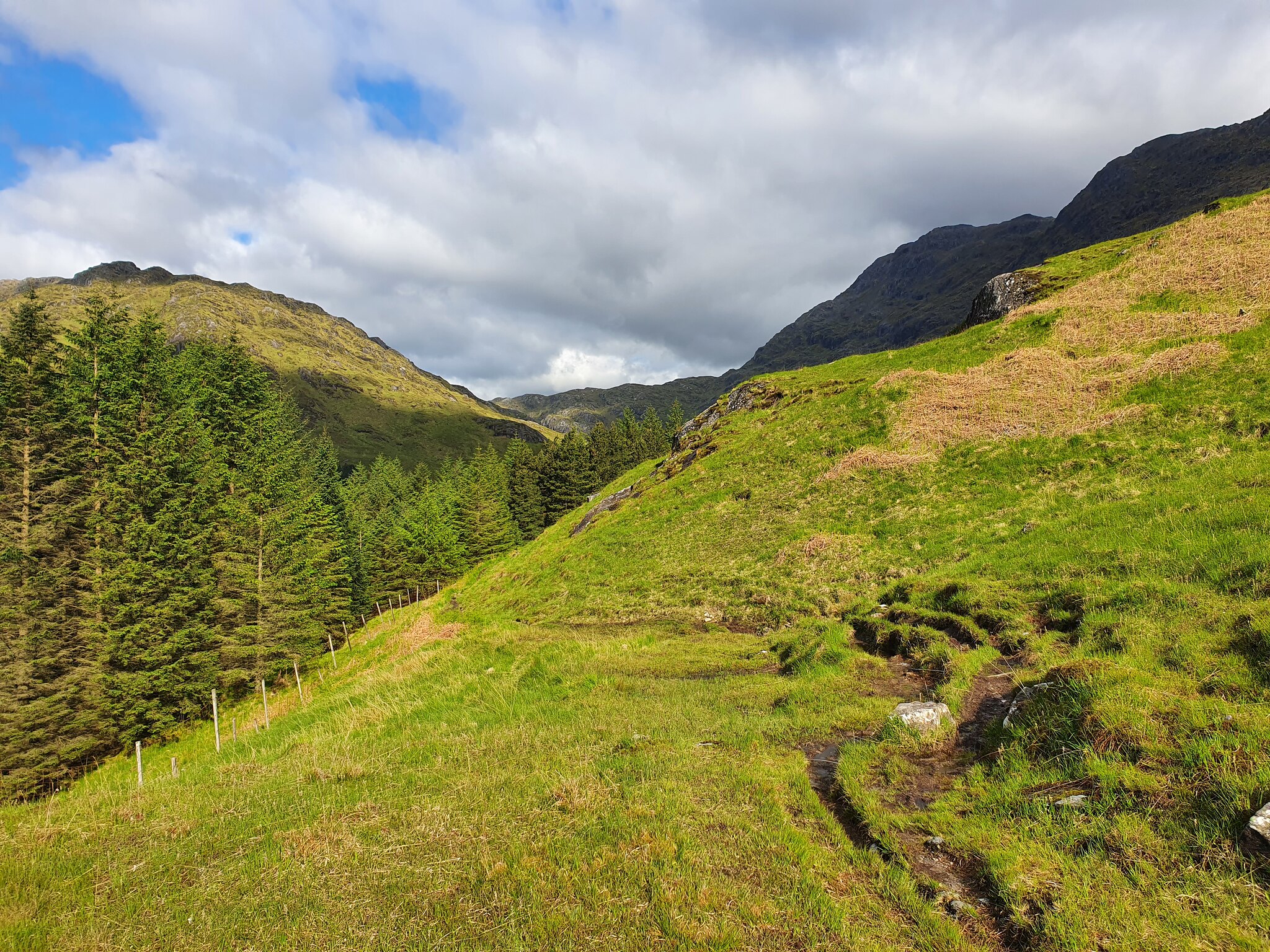 After the section above the forestry, the views completely open out and the landscape is genuinely stunning. A bit like walking into Jurassic Park. 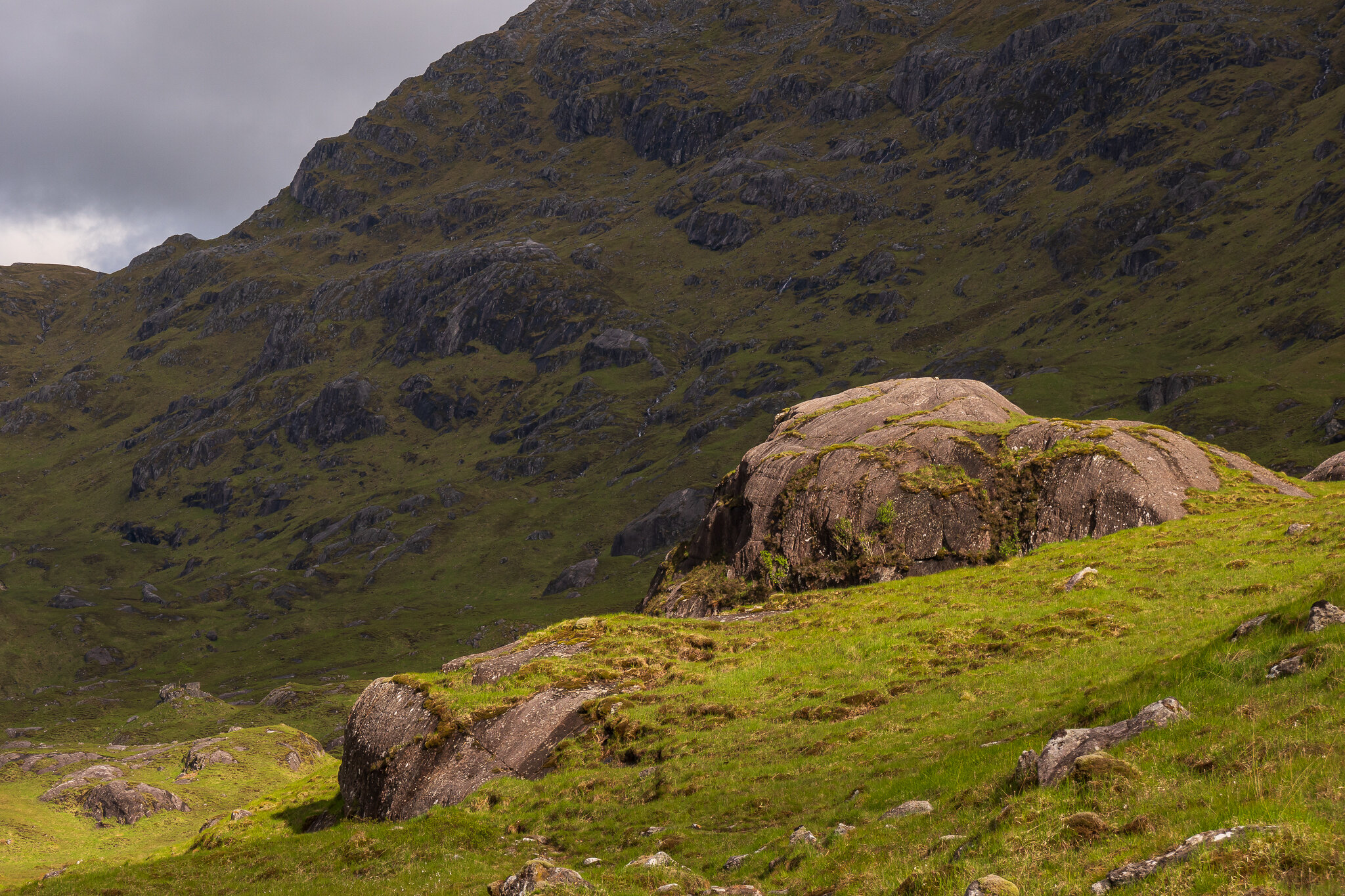 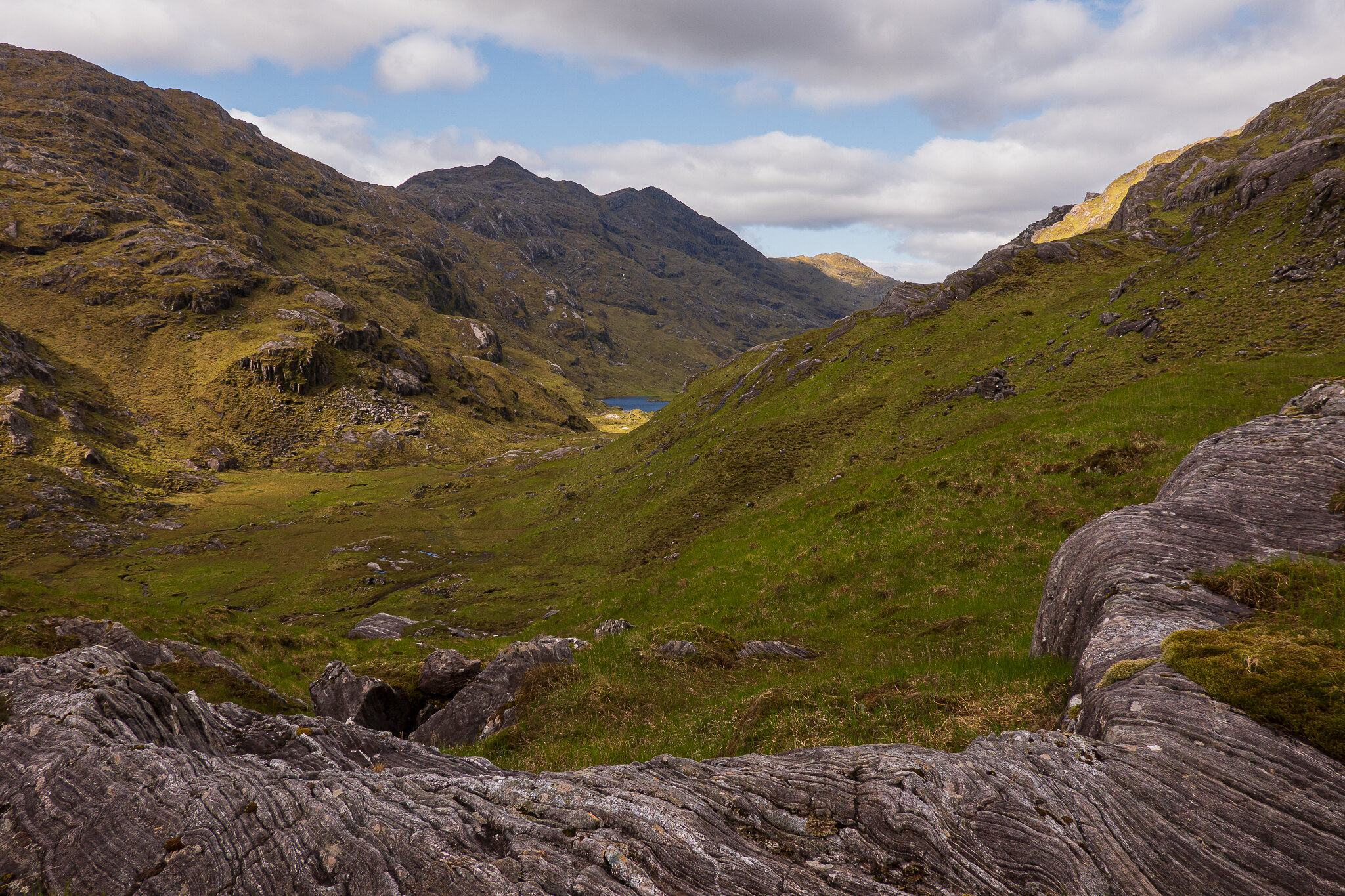 After a while the tracks splits - take the right fork and a boggy track eventually gains good height and becomes rockier underfoot. It then sort of levels off and another obvious track branches off and starts the easy traverse under the cliffs of Garbh Chioch Mhor. It's a landscape of massive boulders, giant slabs and glorious views. I could see clearly out to Rum and Canna and various other islands. However it was starting to get a bit overcast, just as i arrive at Feadan na Ciche. It didn't look as intimidating as I'd expected. 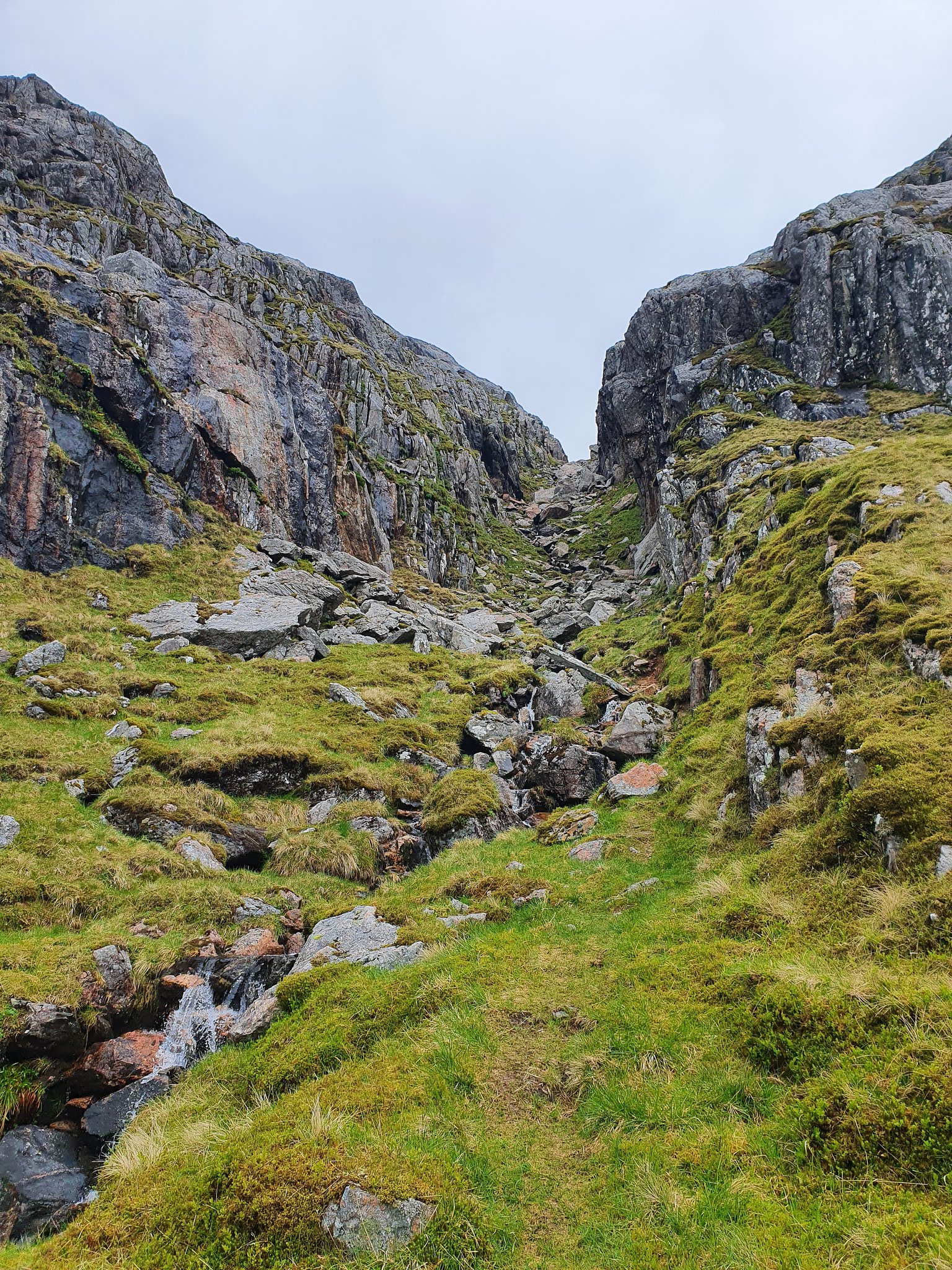 I set off up it. There are bits of path here and there. I just crossed and re-crossed the burn as appropriate for the easiest line up. Care needs to be taken however as there are plenty of greasy boulder and slabs waiting, and it's a long, long way from anywhere. However I got up fairly quickly and reached the bealach. It was getting greyer still. 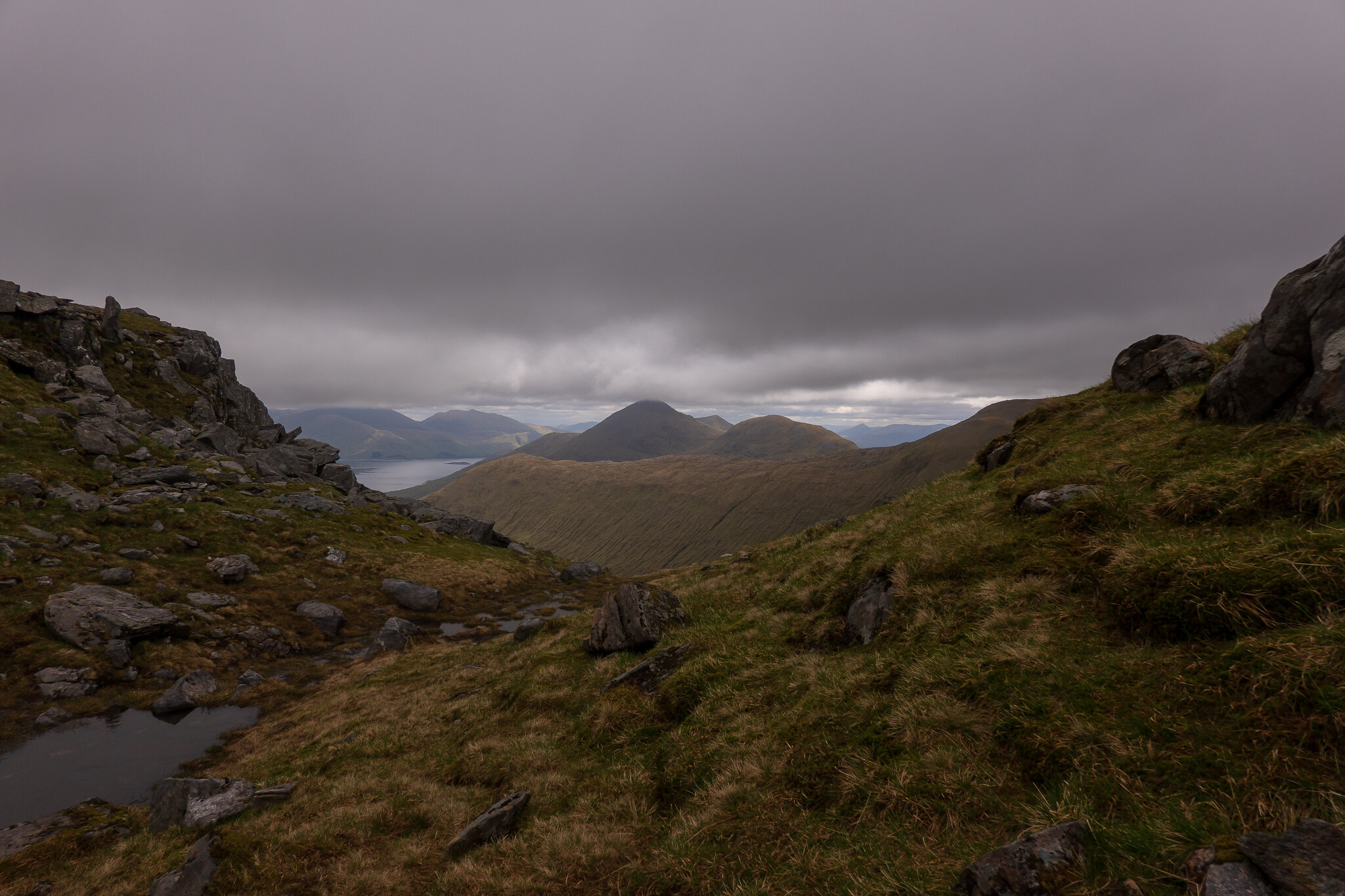 I found the start of the path up to Sgurr na Ciche and motored up it - hoping to beat the clag which was rolling in from the east. Obviously this failed as the clag nicely covered the summit roughly five minutes before I reached it 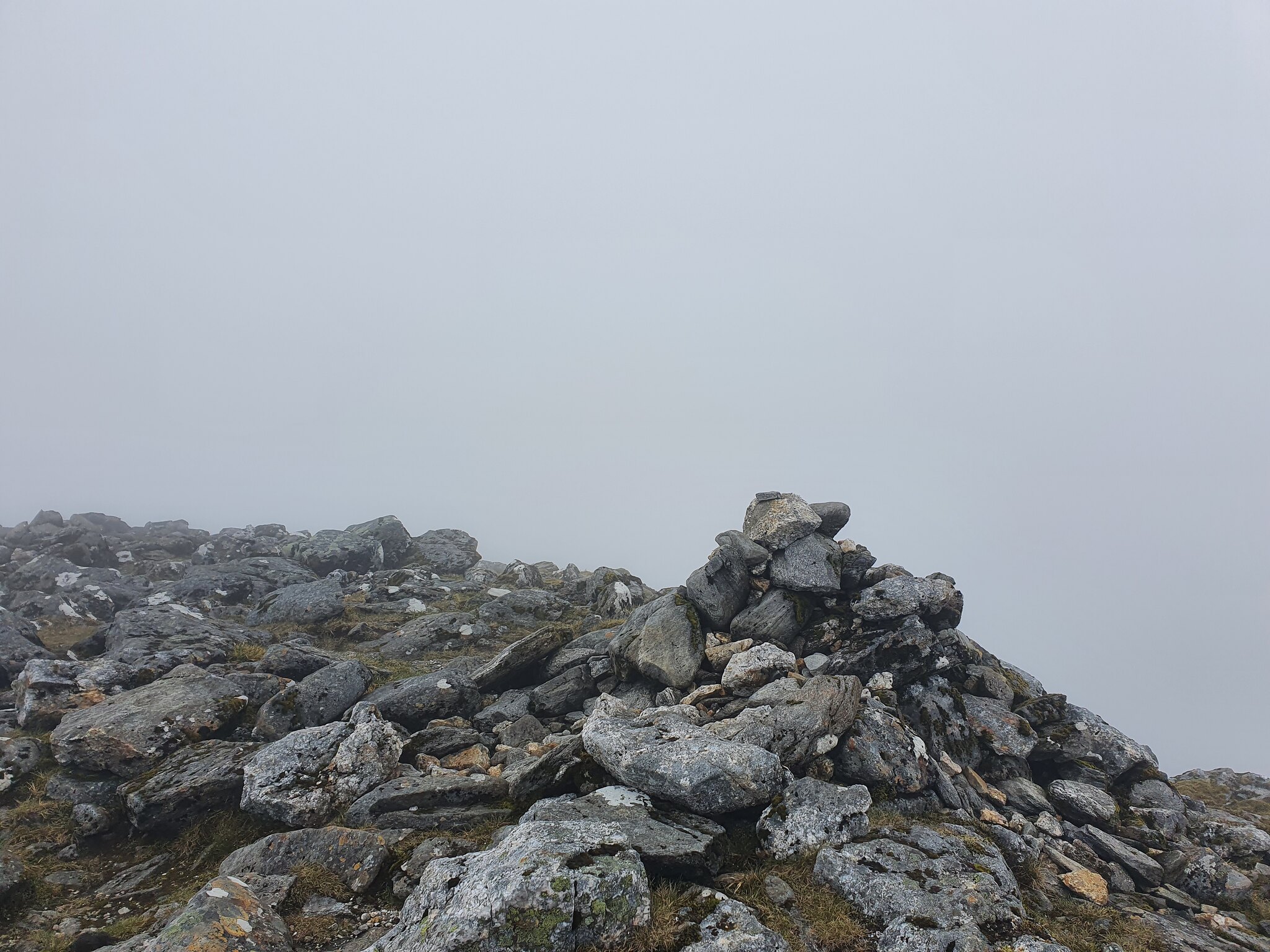 I hung about for 15 mins hoping it would clear (it did, 5 minutes after I left the summit). However thankfully i would have magnificent views for most of the remaining day. I reached the bealach again quickly and met Wayne who of course was going the other direction. He was quick! The pull up to Garbh Chioch Mhor is nice and easy, not a huge amount of ascent and not a lot of distance either. Magnificent views helped. 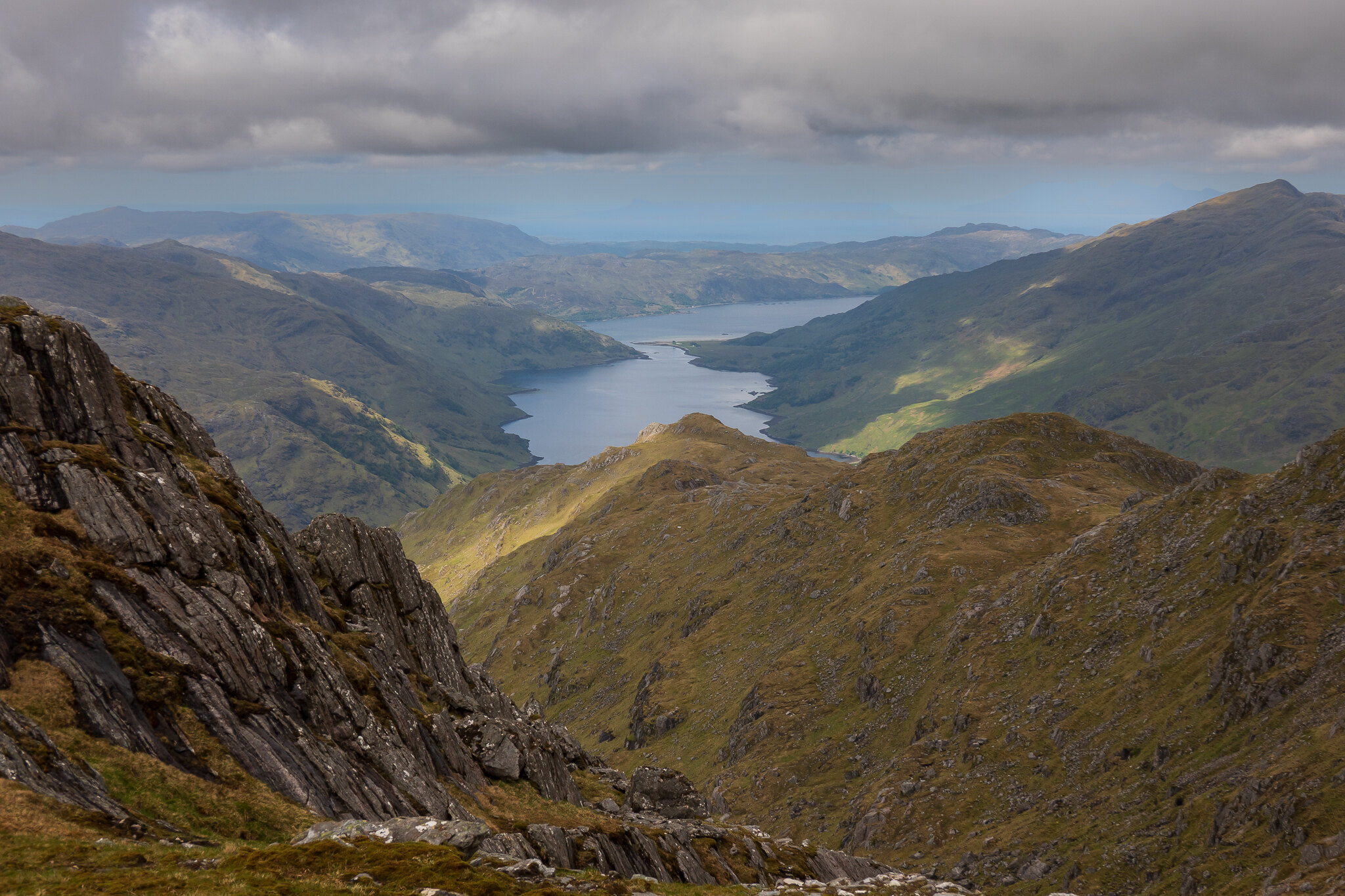 This is probably the rockiest of the three, with slabs and boulders everywhere. There are some nice optional scrambles available as well. 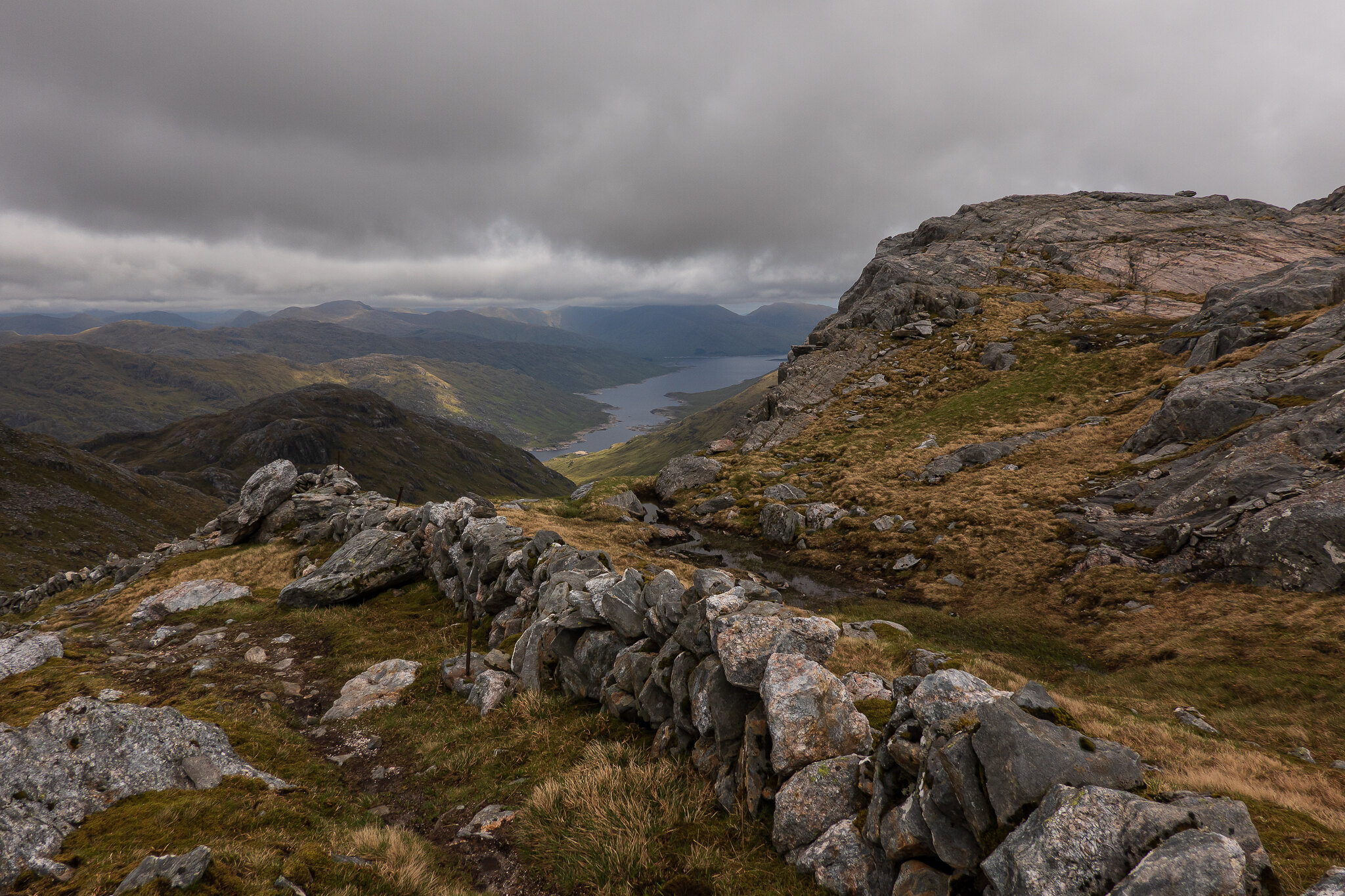 The final pull to the summit comes fairly quickly. This is a tremendous hill. 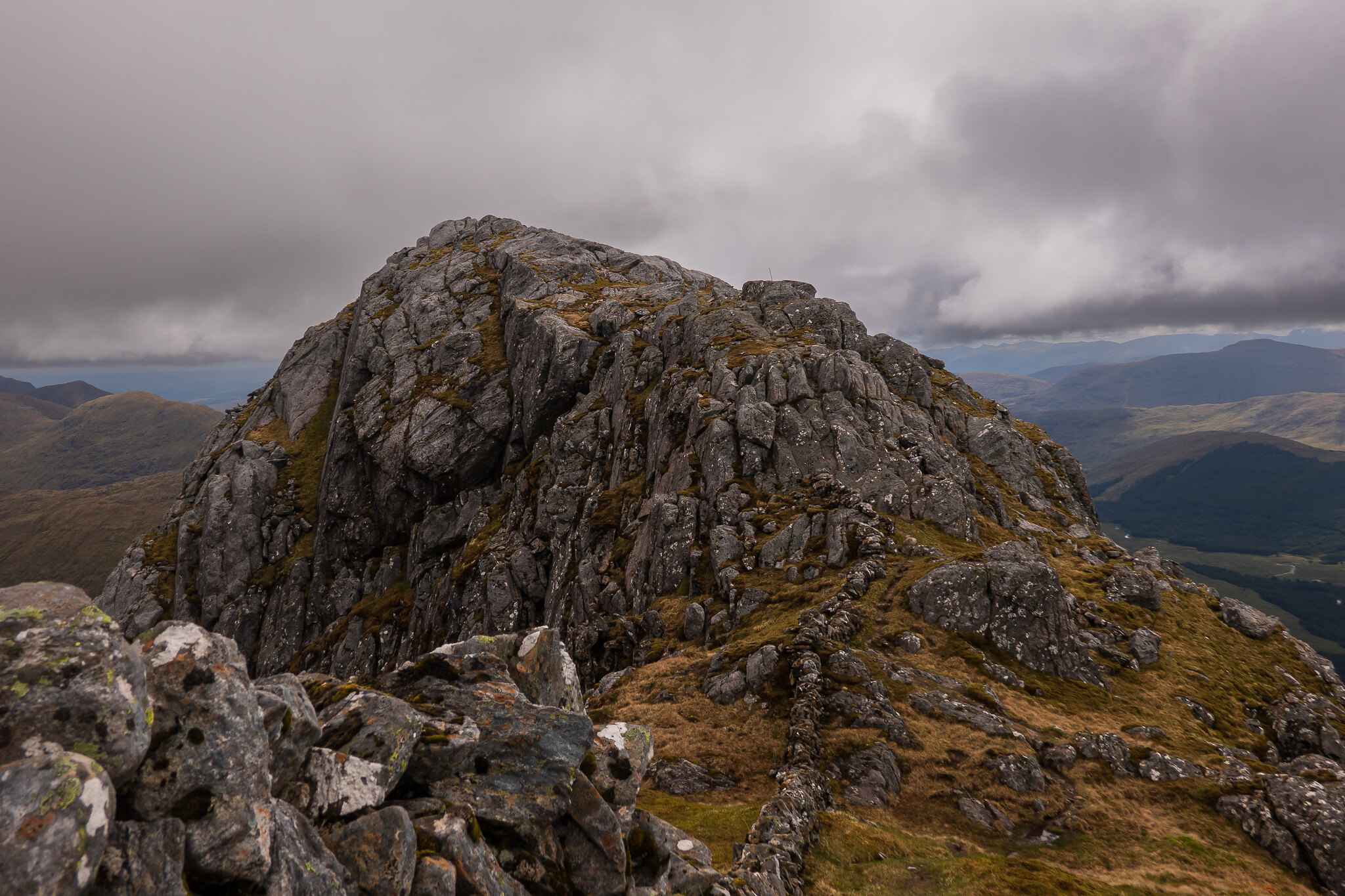 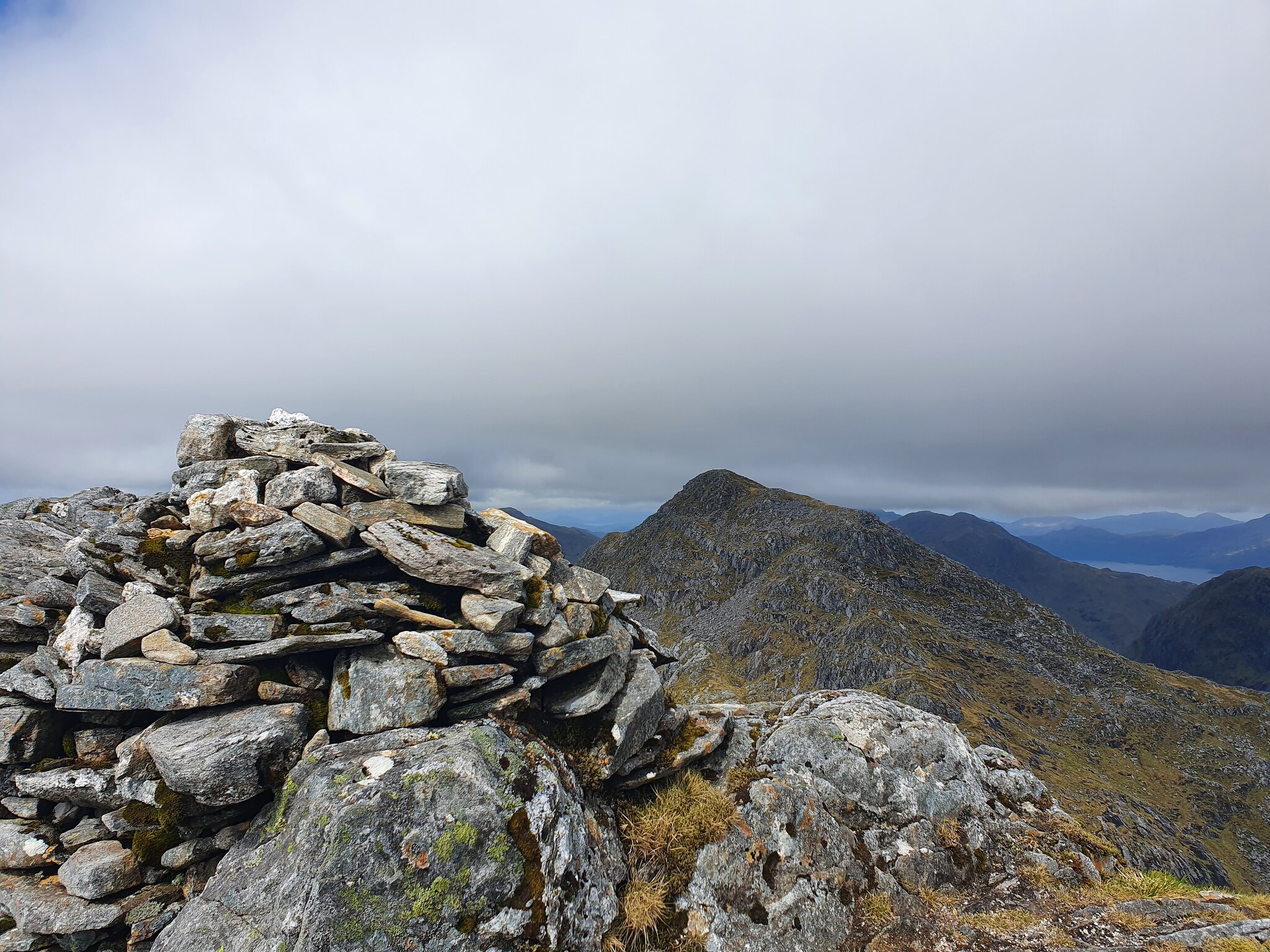 Thinking that seems relatively easy, I of course turned round to see Coireachan looked absolutely miles away

I decided not to hang about. I met quite a few people coming the other way and asked what the path up to Coireachan was like, with response ranging from "Steep as f***" to "muddy", "slippy" and "treacherous". This cemented my plan to include Sgurr Cos na Breachd Laoidh (from now on referred to as "the corbett"). It's SW ridge, whilst almost totally pathless, would offer a less horrific angle of descent. 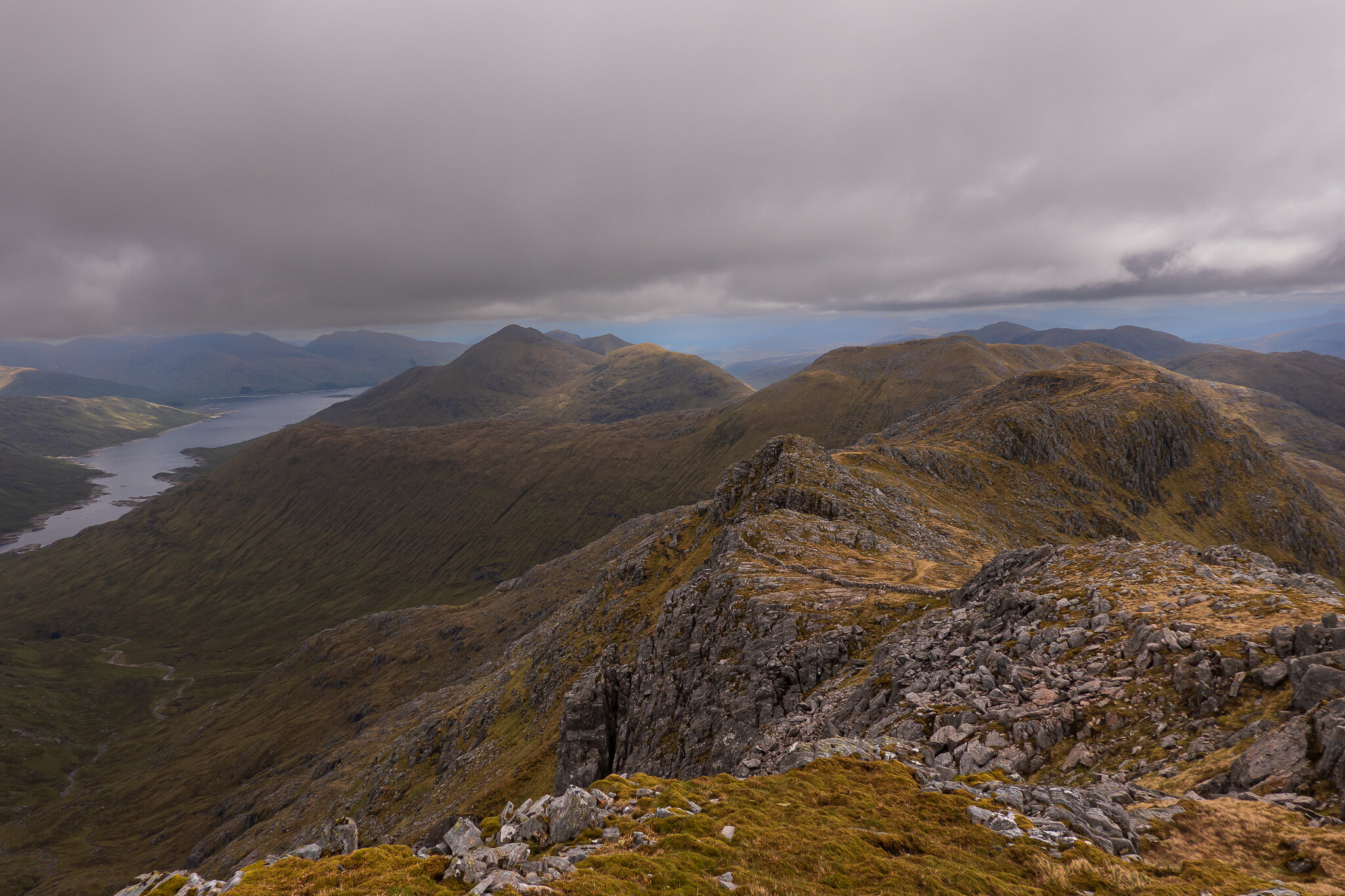 However I had a rough ridge to deal with first, and what a ridge it is. Bizarrely accompanied by a drystone dyke much of the way, it offers fairly rough going but there is a path. After dealing with a few bumps I arrived at the foot of Coireachan and began to climb it. I made good progress up this, only looking back to take in the magnificent views, particularly the sensational rock architecture on Garbh Chioch Mhor. 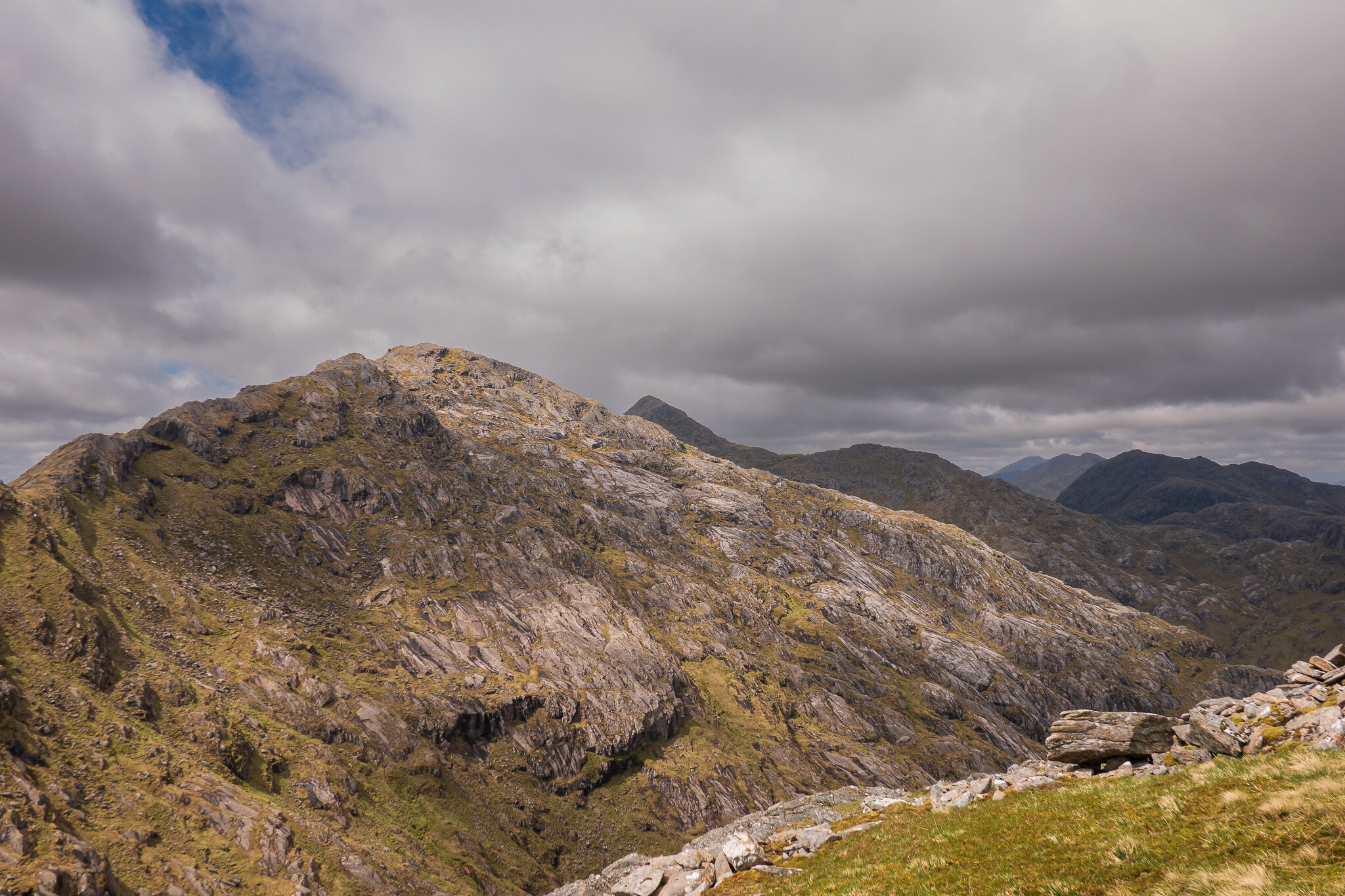 The top of Coireachan was glorious, partly because the wind had dropped to a gentle breeze, partly because it was now warm and sunny, partly because this was my 250th munro, but mostly because I discovered I had an unopened pack of Galaxy Minstrels in my rucksack. Marvellous. I lay in the sun up here for a wee while and contemplated my next move. I could now head down what I had gathered was a monumentally steep path back down off Coireachan, or I could head along the other ridge to An Eag and then onto "The Corbett" which looked quite easy from up here, before taking the SW ridge back down to the forest. I felt fine physically, and didn't fancy a descent of something like 750m down a crappy, steep, slippy path so opted to head to An Eag. One last shot of the summit views though. 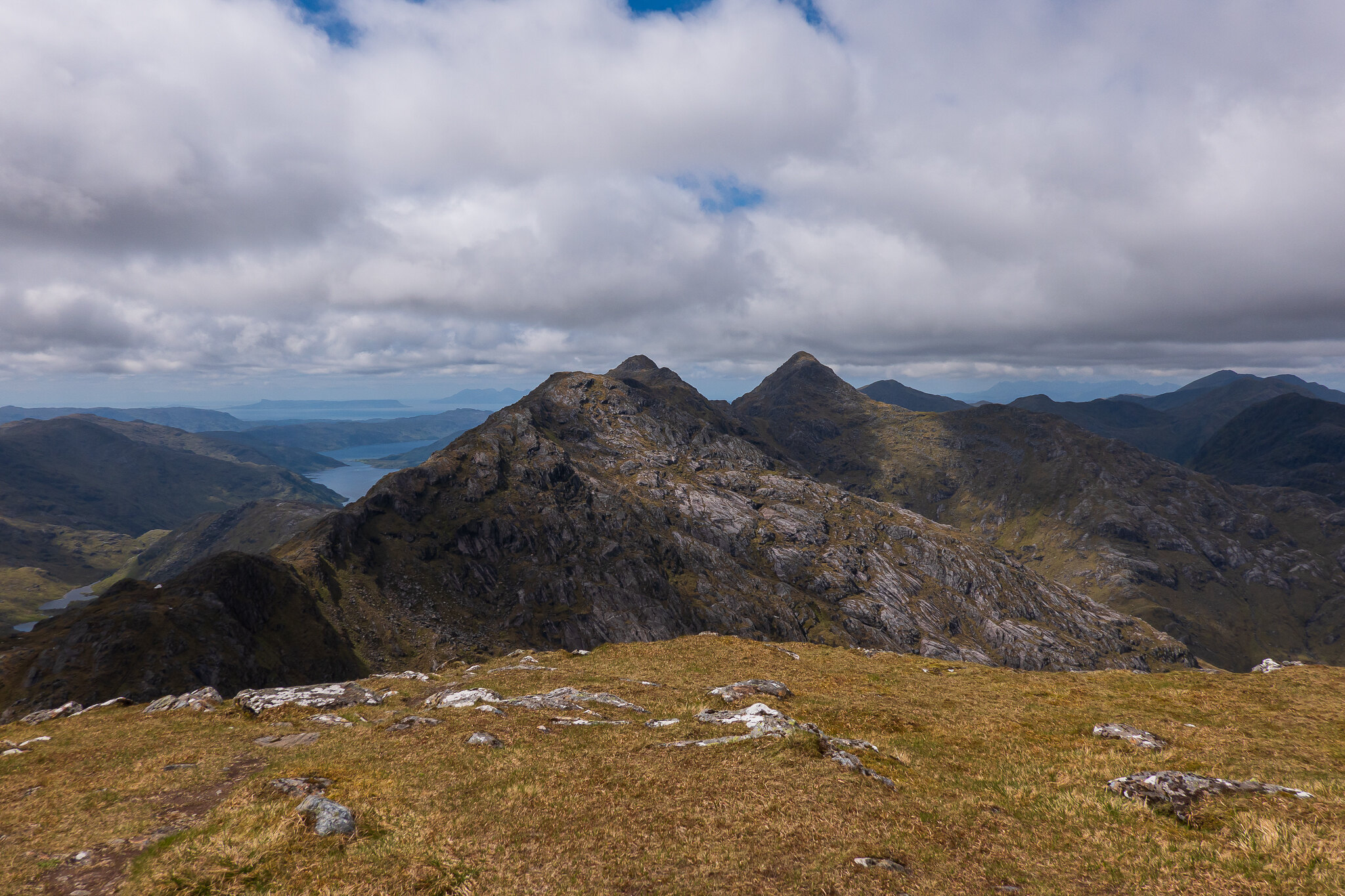 OK one more, this time in pano 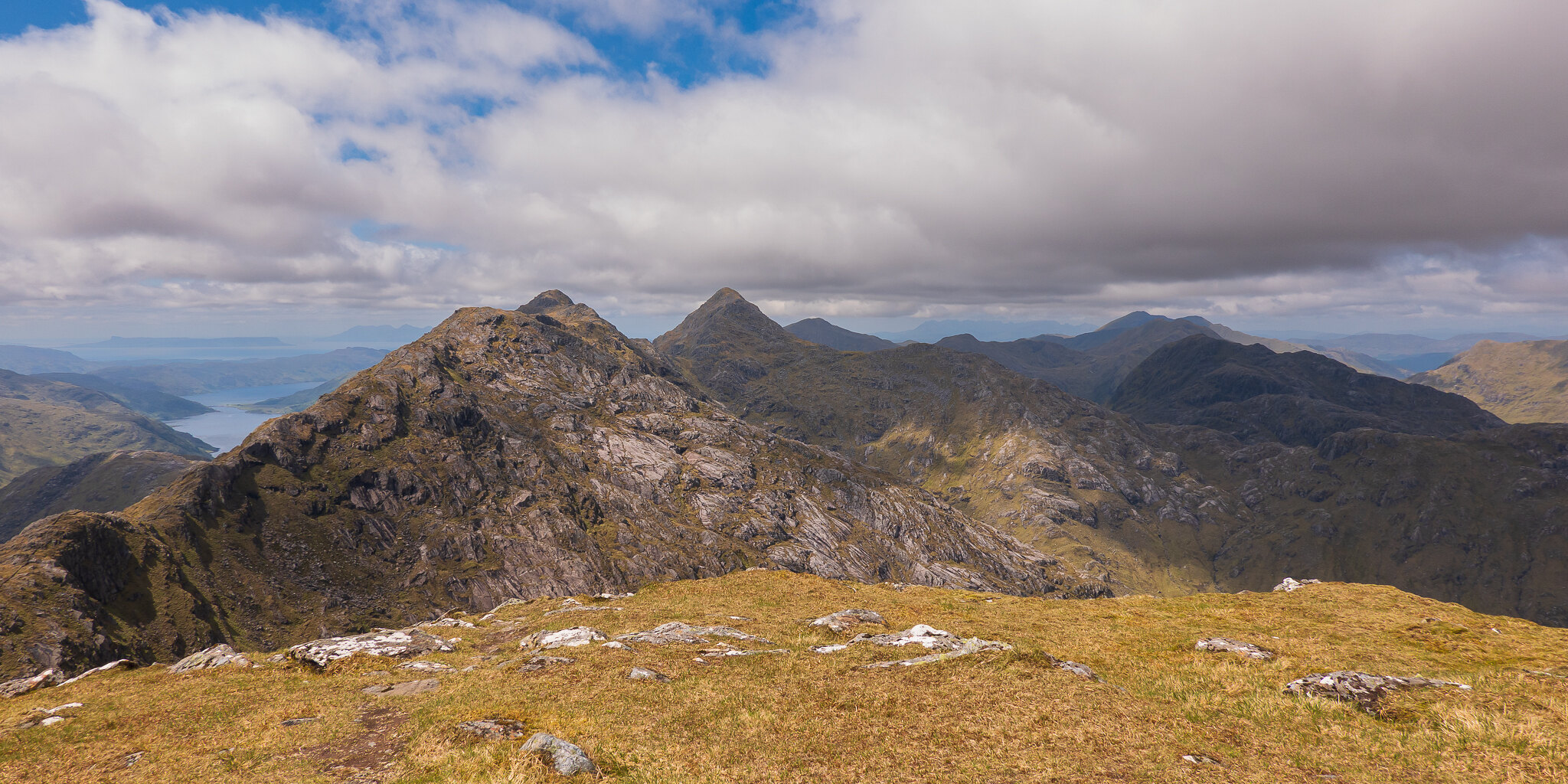 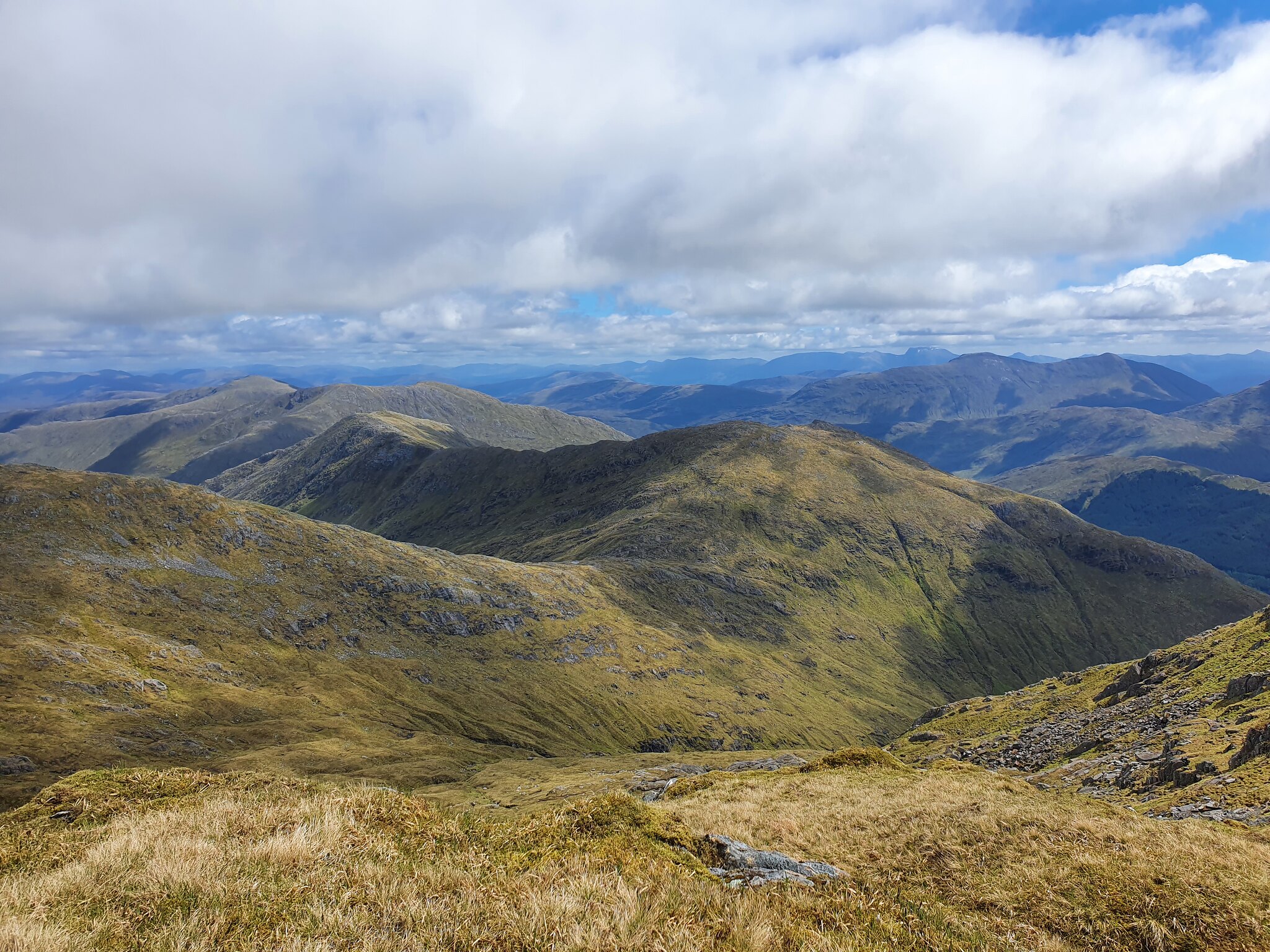 There is a clear path here as this forms the ongoing route to Sgurr Mor. An Eag was reached fairly easy after a slightly annoying descent and gave fine views along the desolation of Glen Kingie 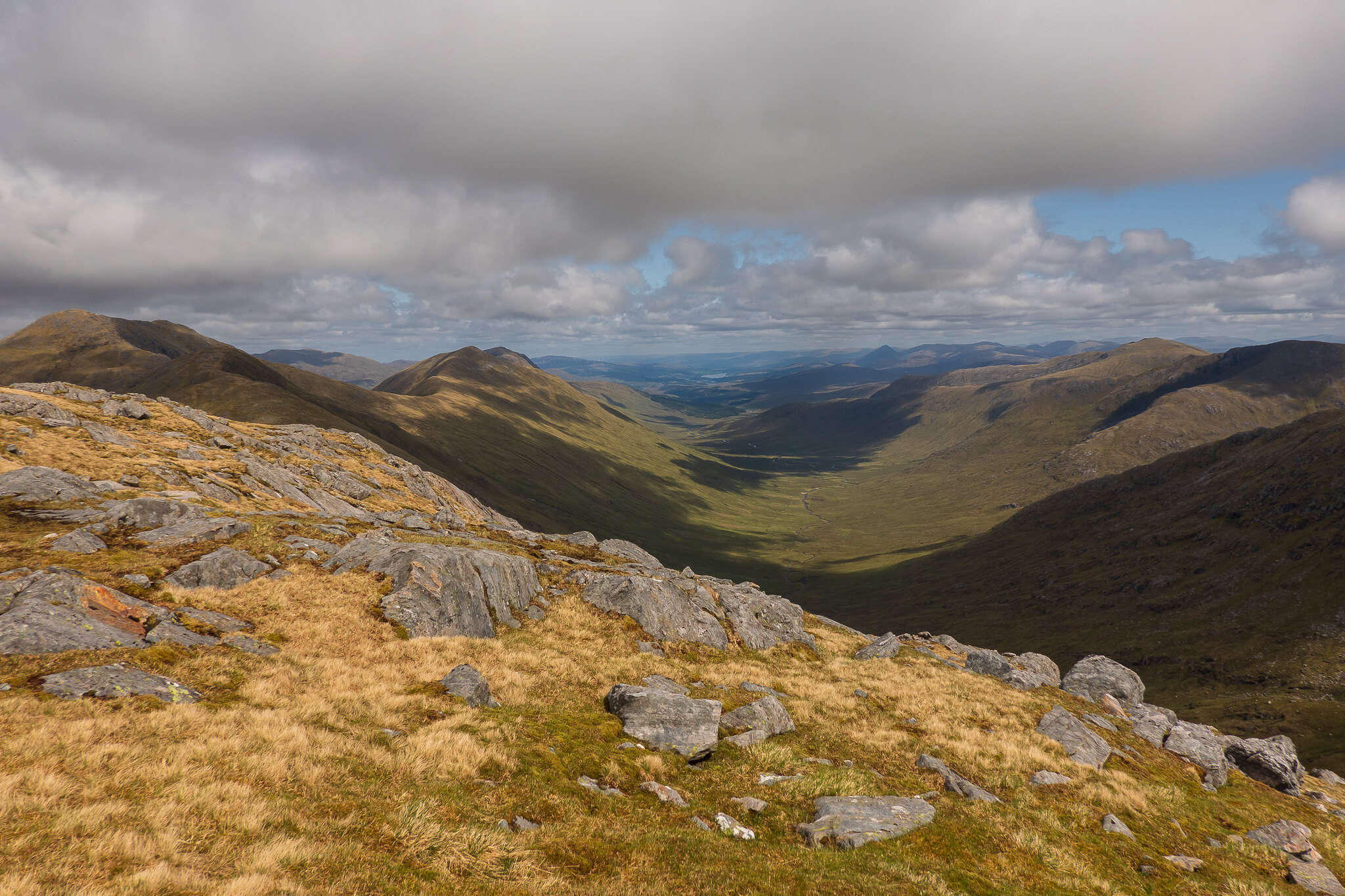 Another descent took me to the foot of "The Corbett". Hillwalkers will all be familiar with that pleasing situation where an ascent looks steep as hell from a distance, but when get to the bottom of it, it actually looks totally fine and you've no idea what you were worrying about. Well, this was the polar opposite. The loss of height was greater than expected and i now had a massive looking, steep climb to "The Corbett". I probably swore a little at this point. There was a nice wee lochan here, which although pretty, did little to allay my lack of enthusiasm for the next bit. 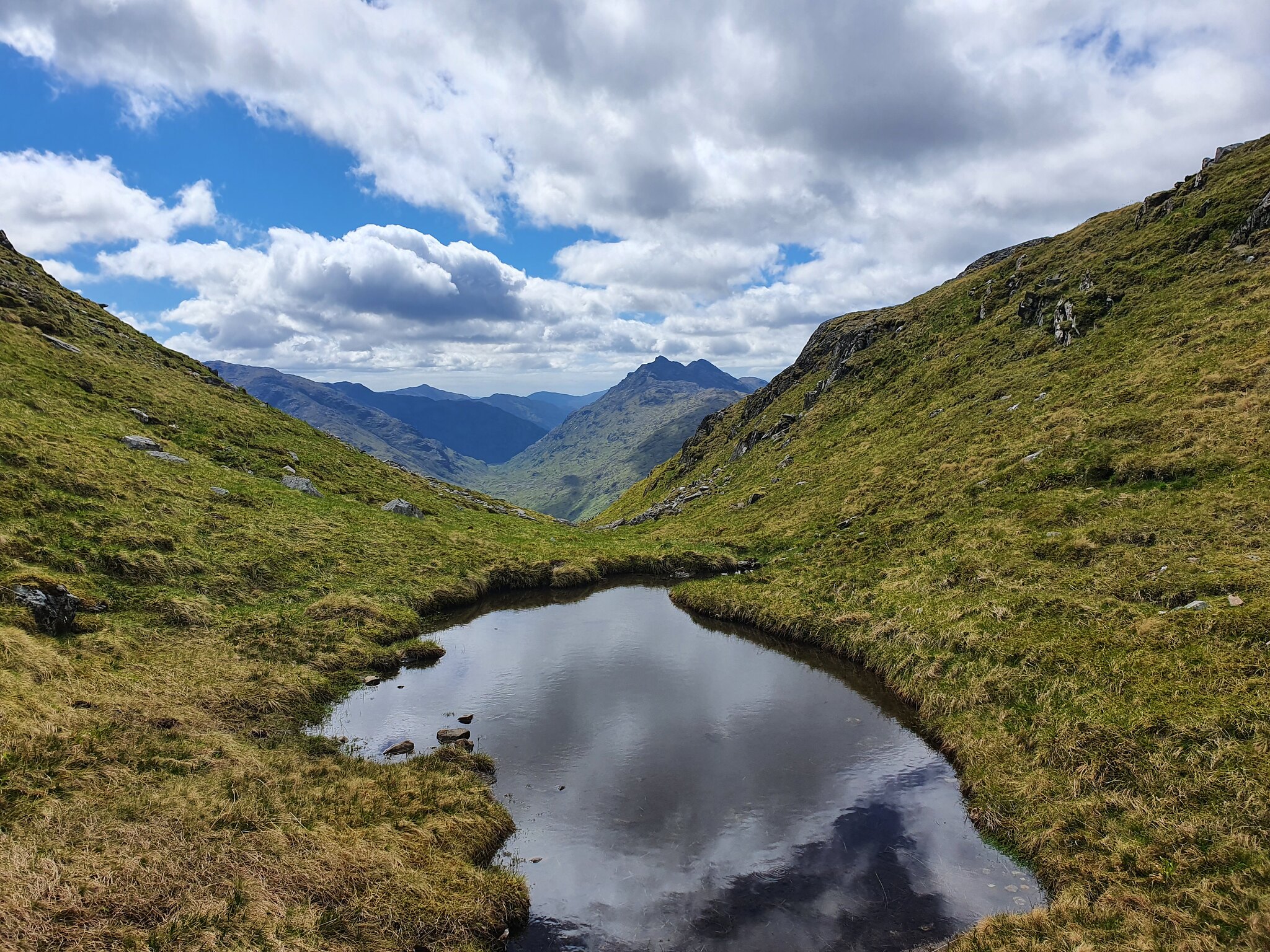 There is no path as all sensible walkers have either sacked it well before this point, or headed off to Sgurr Mor from An Eag instead of bagging a corbett with a name so large I probably climbed it quicker than i could correctly spell it here. Anyway, I just took the wall/fenceposts as my line, and surprisingly got up it in about 20 minutes. It's actually a cracking viewpoint. 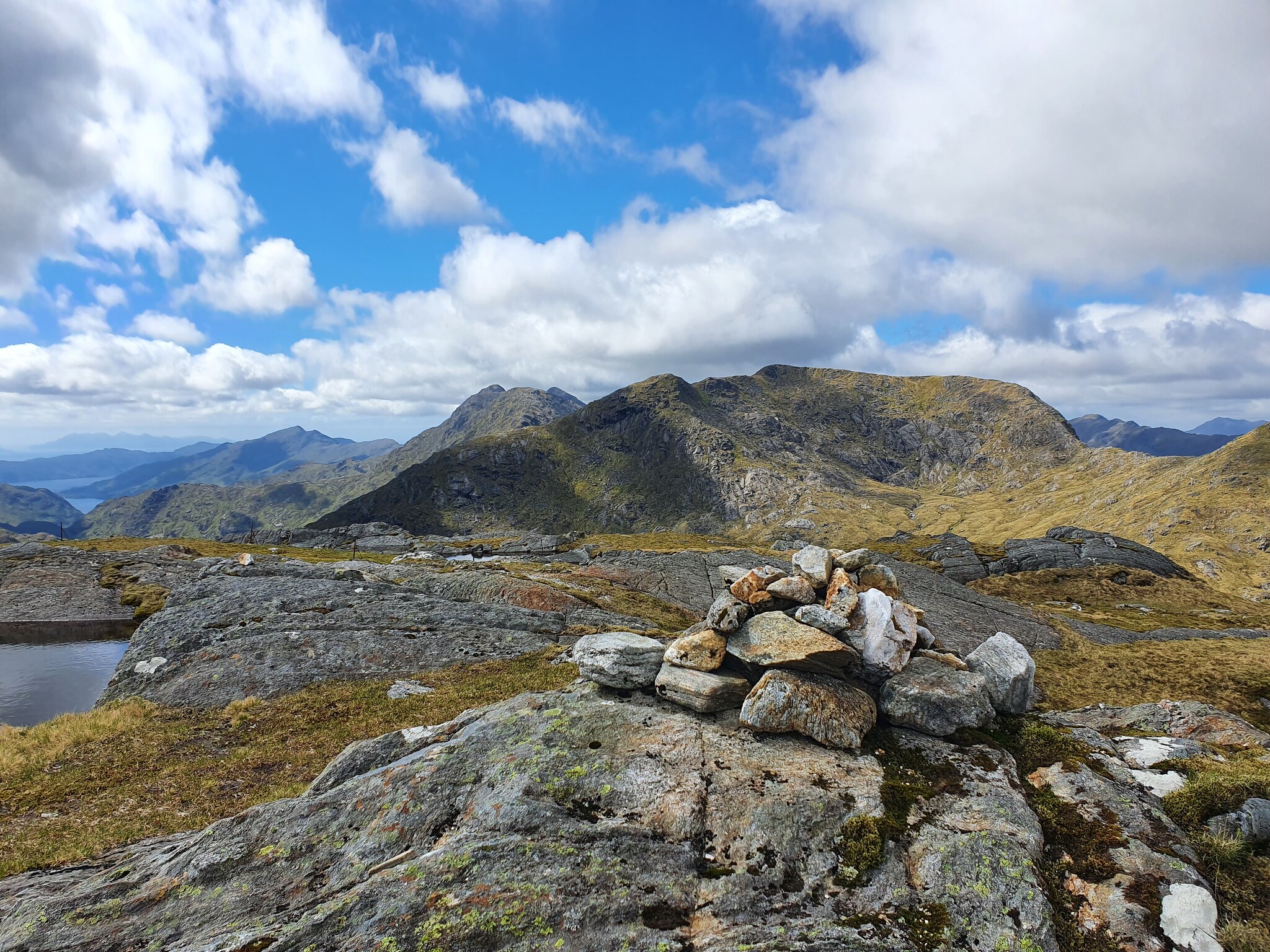 I didn't hang about long here as I wanted to get the lengthy descent back to the bike over with. Anticipating a probably time-consuming drive back to Invergarry, and having a meal booked for 8pm I didn't want to be late back. The ridge down, as expected is almost entirely pathless until the last 10 minutes. However the terrain isn't too awful, most of the upper section was dry grass you could almost jog down, with more bog appearing from about 450m height. Pleasingly the views remained tremendous. The best line is to simply follow the old fence. 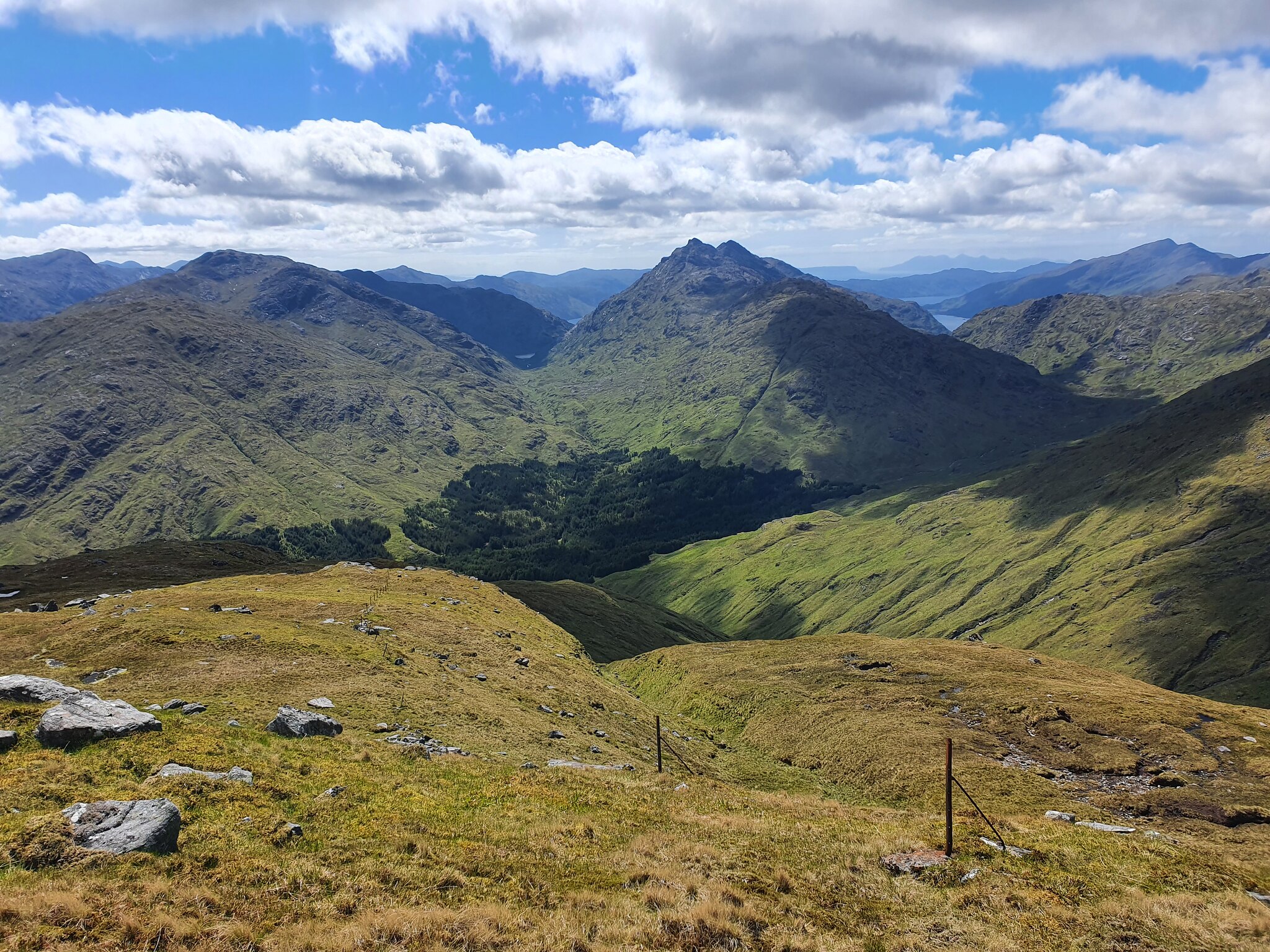 Coire nan Uth looks absolutely fantastic from this angle as well. What a place. 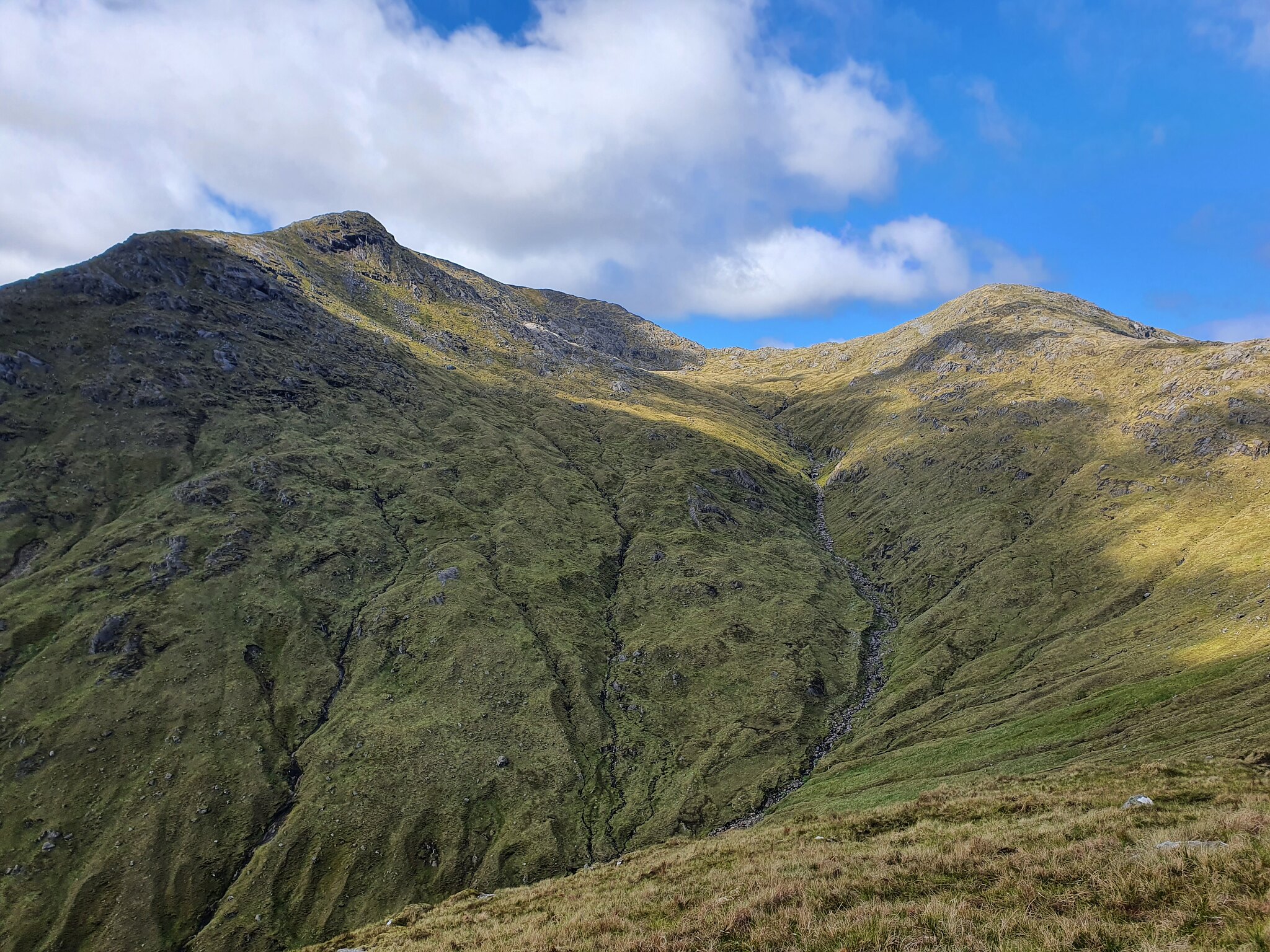 After about 45 minutes I finally reached the top of the boggy forest. The crossing of Allt Coire nan Uth was completely straightforward and I duly made my way down through the woods and back over the rickety bridge to my bike, with some relief. I even had the bonus of a gentle breeze to keep the midges off. Splendid stuff. The cycle out was fairly straightforward with the only unpleasantness coming from the lengthy climb back up between the forestry sections, however the rest was fine with plenty of freewheeling. 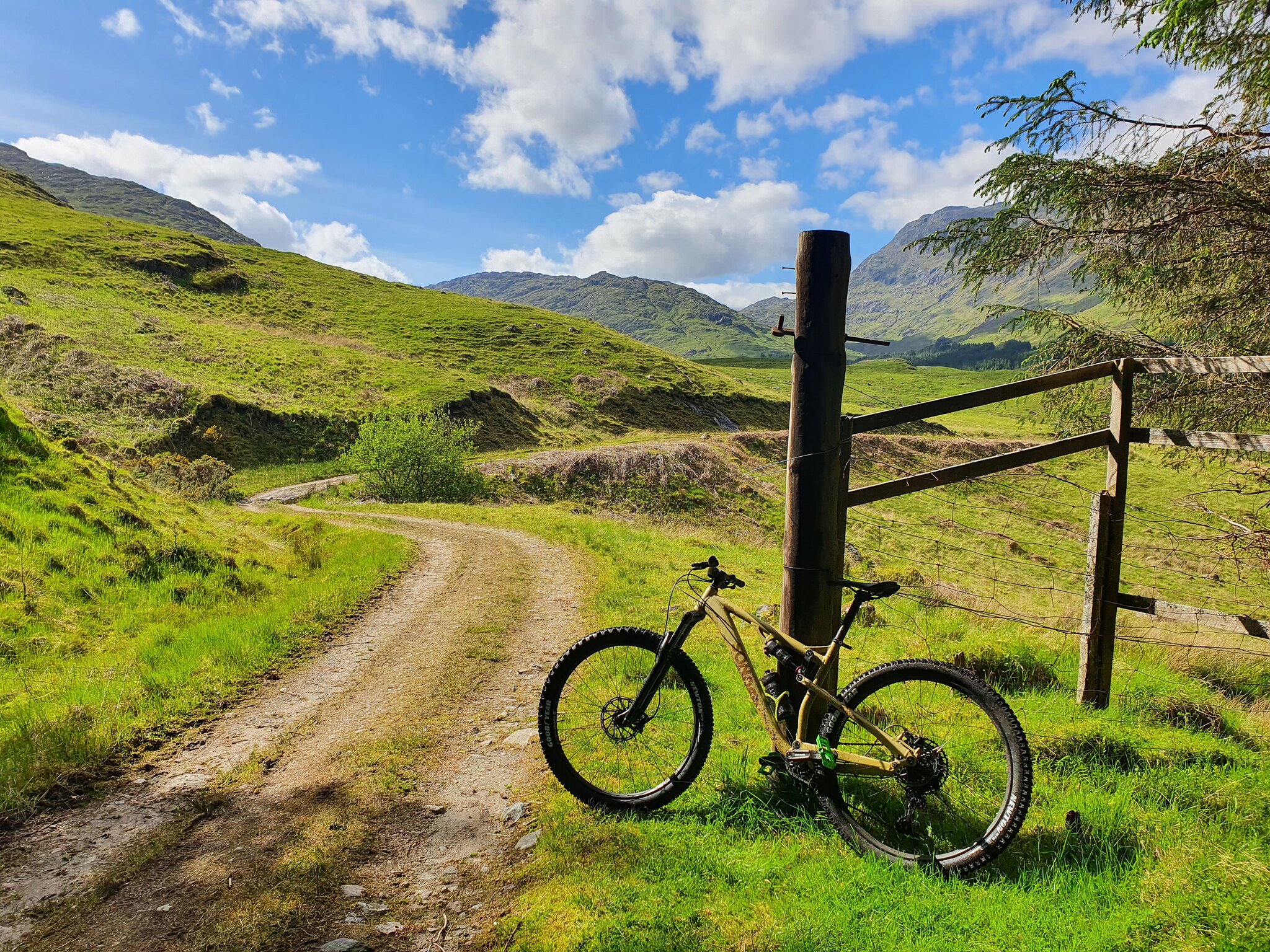 I arrived back at the car in glorious sunshine, the car park still very busy (both A'Chuil and Sourlies were rammed full apparently). Bike duly loaded up and stinking boots and socks duly launched into the boot of the car (where i basically forgot about them for 2 days - you can imagine how lovely my car smells today) I headed back along the Loch Arkaig road and eventually back to Invergarry for a much needed cold beer and later a meal at the nearby Indian restaurant.

In summary, this is a physically challenging walk , over some extremely rough terrain but save it for a good day. These hills are magnificent and well worth the exertion. The route broke down as follows:


Battered by the Beautiful Beinn Deargs

Aonach Eagach Return: What a Day!