Around a year a go when initially planning this trip my friends and I started looking at alternatives to the lengthy bogtrot from Glen Dessary. I can't remember who's idea it was, but someone mentioned kayaking across Loch Quoich. I immediately started looking for similar reports on here and got a couple of ideas. Lee had bought a rigid kayak, myself and Rob would later buy inflatables (not as cheap as you would think

). As a useful by-product I've found that i really enjoy kayaking and it presents wild camping possibilities to my partner Anne which would not have been possible otherwise. Great stuff.

As the weeks ticked by we anxiously watched the latest Covid updates praying travel restrictions would be lifted, which they were, then I started looking at the weather forecasts just as anxiously in the days before. As usual I headed up a few days early and after finally ticking off Beinn Bhuidhe high above Glen Fyne, I took the next long drive north to my accommodation for the next 3 nights, the excellent Saddle Mountain Hostel. These are particularly difficult times for Hostel owners as rooms can only be let to a single household, however Helen and Gregor are doing a great job and hopefully things return to normal soon. My second day threatened an awful forecast so I decided to go low-level for a walk up Gleann Cia'aig from Loch Arkaig. The rain never really came so I picked of the two corbetts up there Meall na h-Eilde and Geal Charn and returned via the neighbouring glen to Achnasaul. A day which promised a drenching ended up being a great walk.

Rob then arrived in his camper and I repeated Gleouriach and Spidean Mialach with him in excellent conditions, save for a minor blizzard on the way up the second munro. Lee arrived and we all met up on Saturday and sorted out our respective accommodation. Sunday would see us again walk Ben Tee avoiding forecast rain, the remainder of the week saw us practising on our kayaks on Loch Oich, then another superb day on the hills, this time enduring the long drive down Glen Quoich for a third time climbing Sgurr a'Mhaoraich - another repeat for me but more than worth it as the last time all I had seen was the inside of a cloud and rain for 4 hours.

Finally we got a day with a good forecast with little wind, so decided to go for Sgurr Mor across loch Quoich, the other option was the three munros further along. however the afternoon saw a wind forecast increasing to 10mph meaning a 5 mile paddle back into a headwind. No thank you

We arrived in Glen Quoich, at the usual "put in" spot for this sort of nonsense around 9:30am. Half an hour of faff and we were ready to set off. The breeze was considerably stronger than expected and I was looking pretty anxiously at the small (I hoped) waves sweeping across Loch Quoich. Lee and I would set off first, with Rob and his dog following 20 minutes later (she has a habit of trying to jump out of his kayak and into ours if we are within sight). 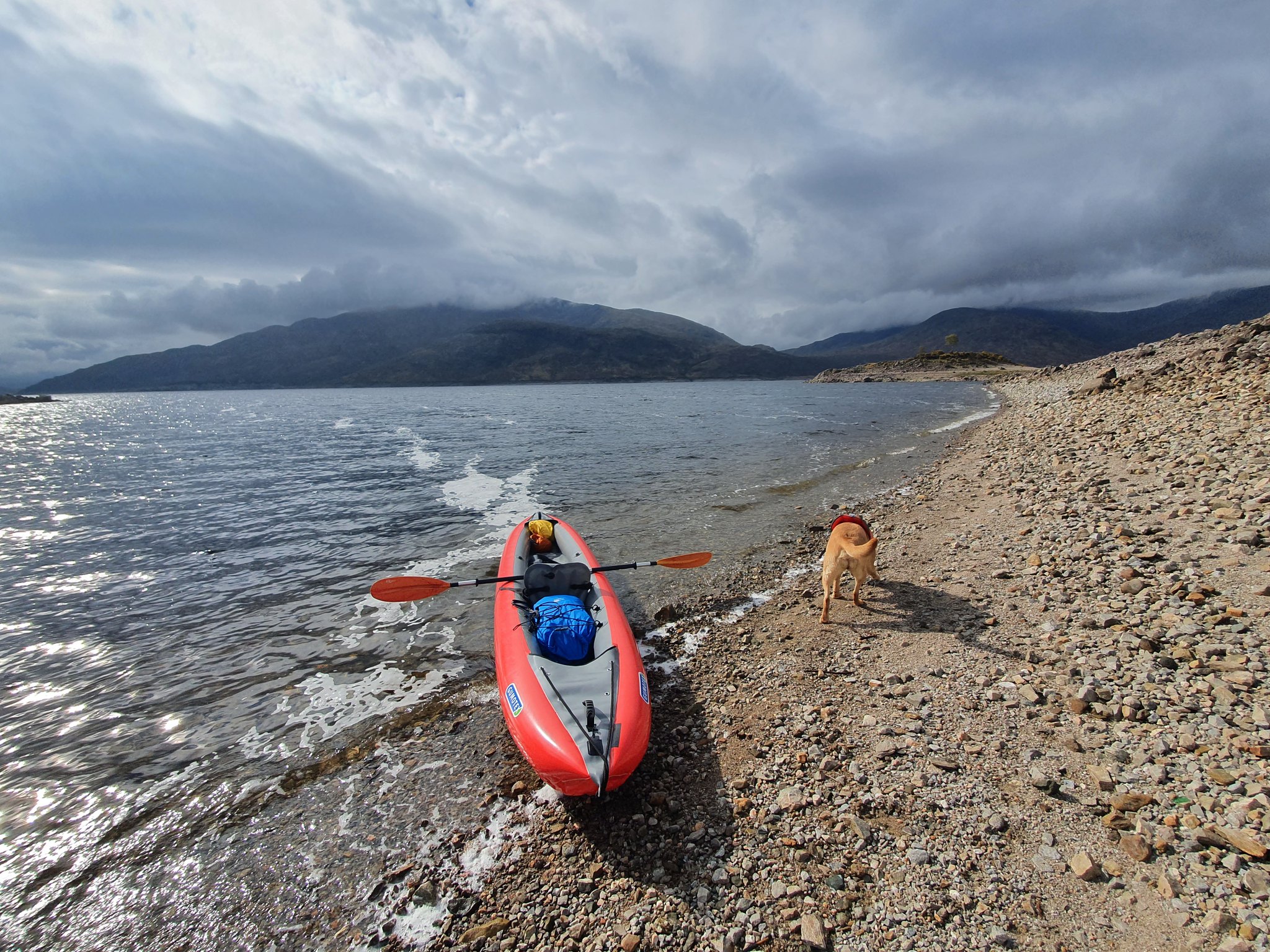 Lee and I duly set off first. We were sort in a bit of a crosswind and initially followed the shore as closely as possible. We picked out a distance boulder and decided to cut across the open water at that point. I won't lie, having only kayaked in calm waters before, the thought of a capsize in cold water, about 400m from either shore didn't half concentrate the mind. However we made it across unscathed and perhaps somewhat masochistically enjoyed the experience. 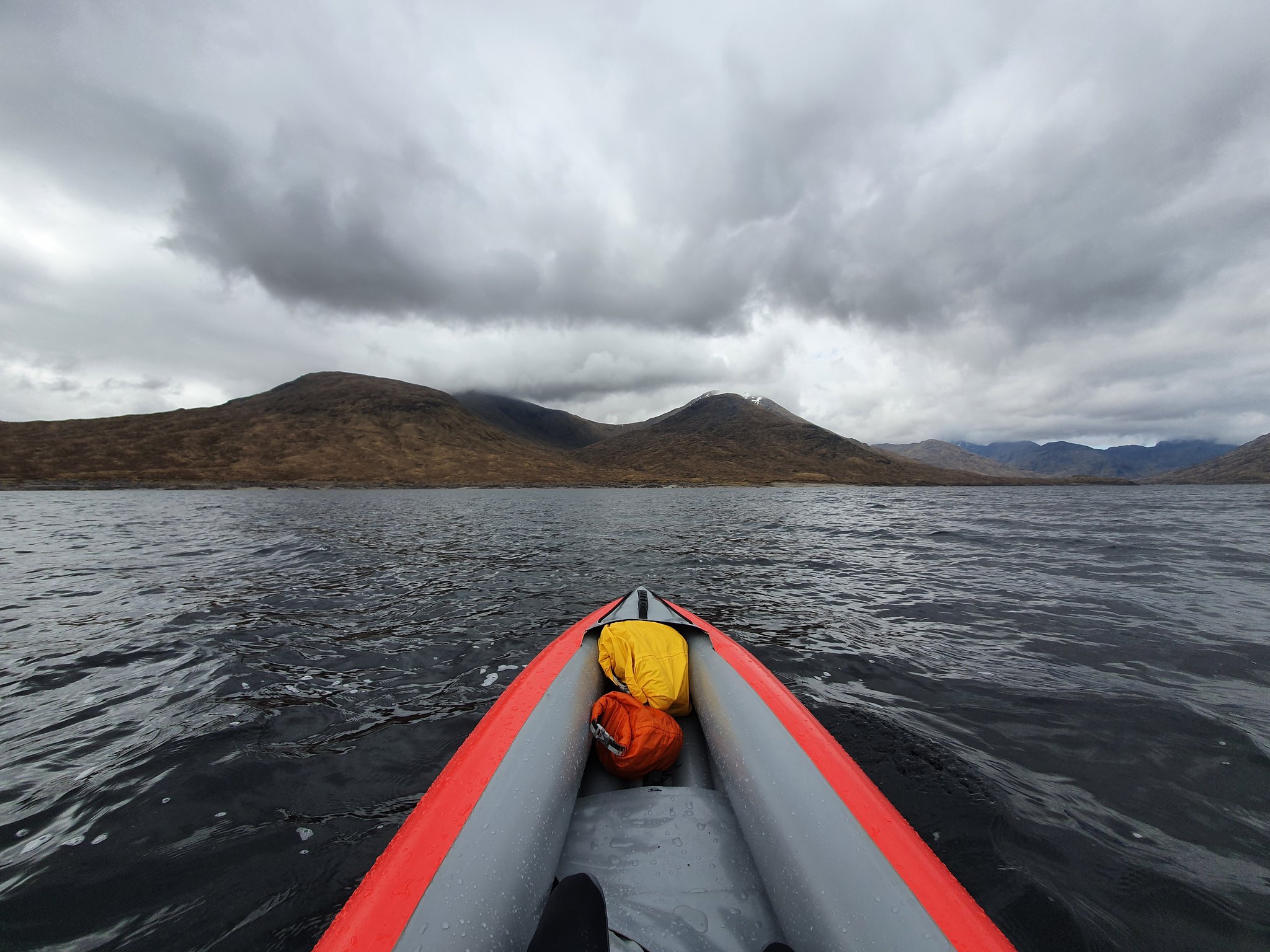 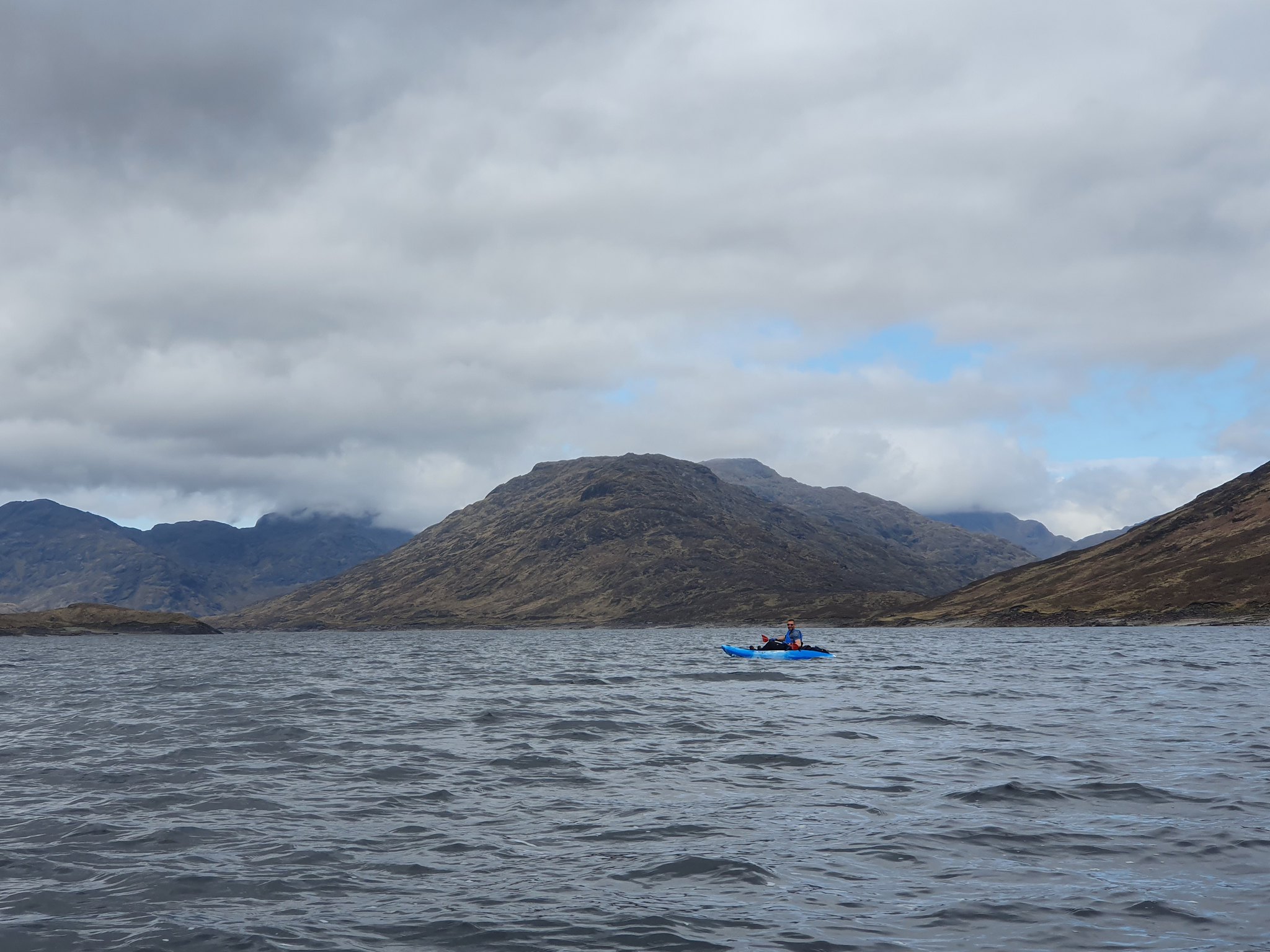 Rob arrived safely around half an hour later. 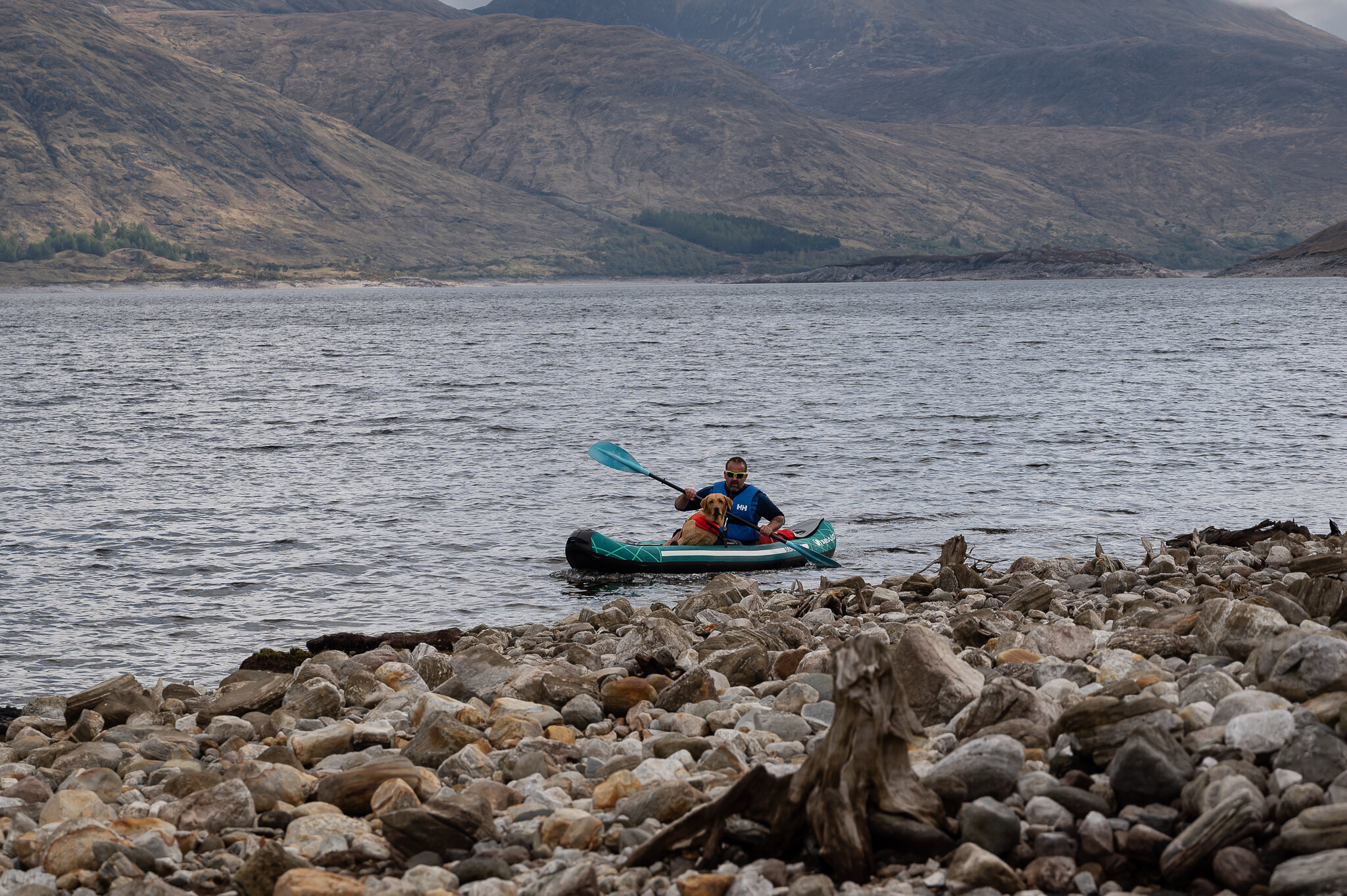 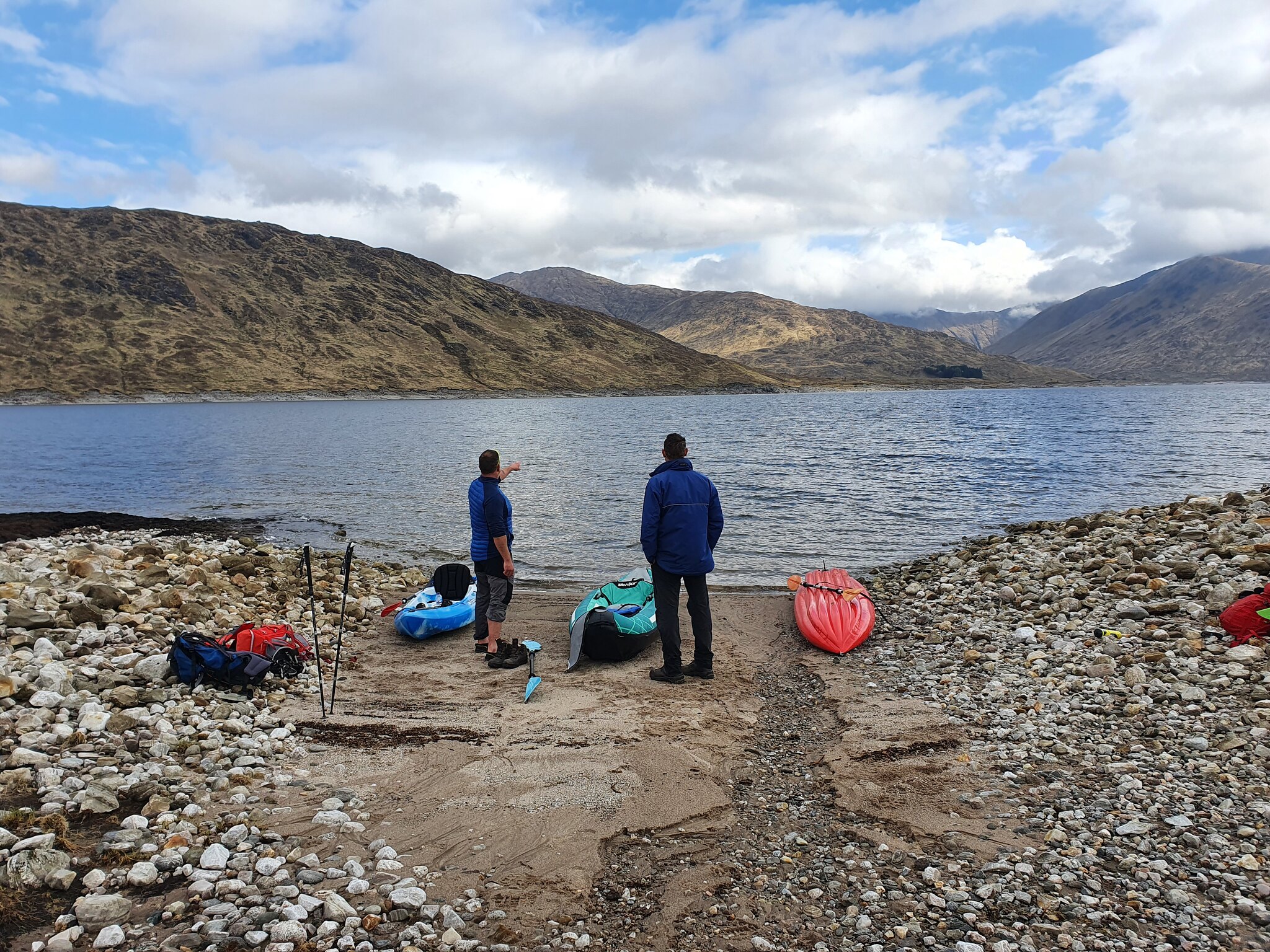 After a few minutes drying feet and trying to surgically remove wet neoprene kayaking socks without dislocating both shoulders in the process, it was time to start walking. Maps and other reports suggested a decent path up into Coire Buidhe then heading steeply up to Sgurr Mor's north ridge. We set off up into the coire following a pretty decent path (I may well have been audibly praying for the wind to drop in roughly 4 hours time). As we gained height on the track, good views opened up behind. 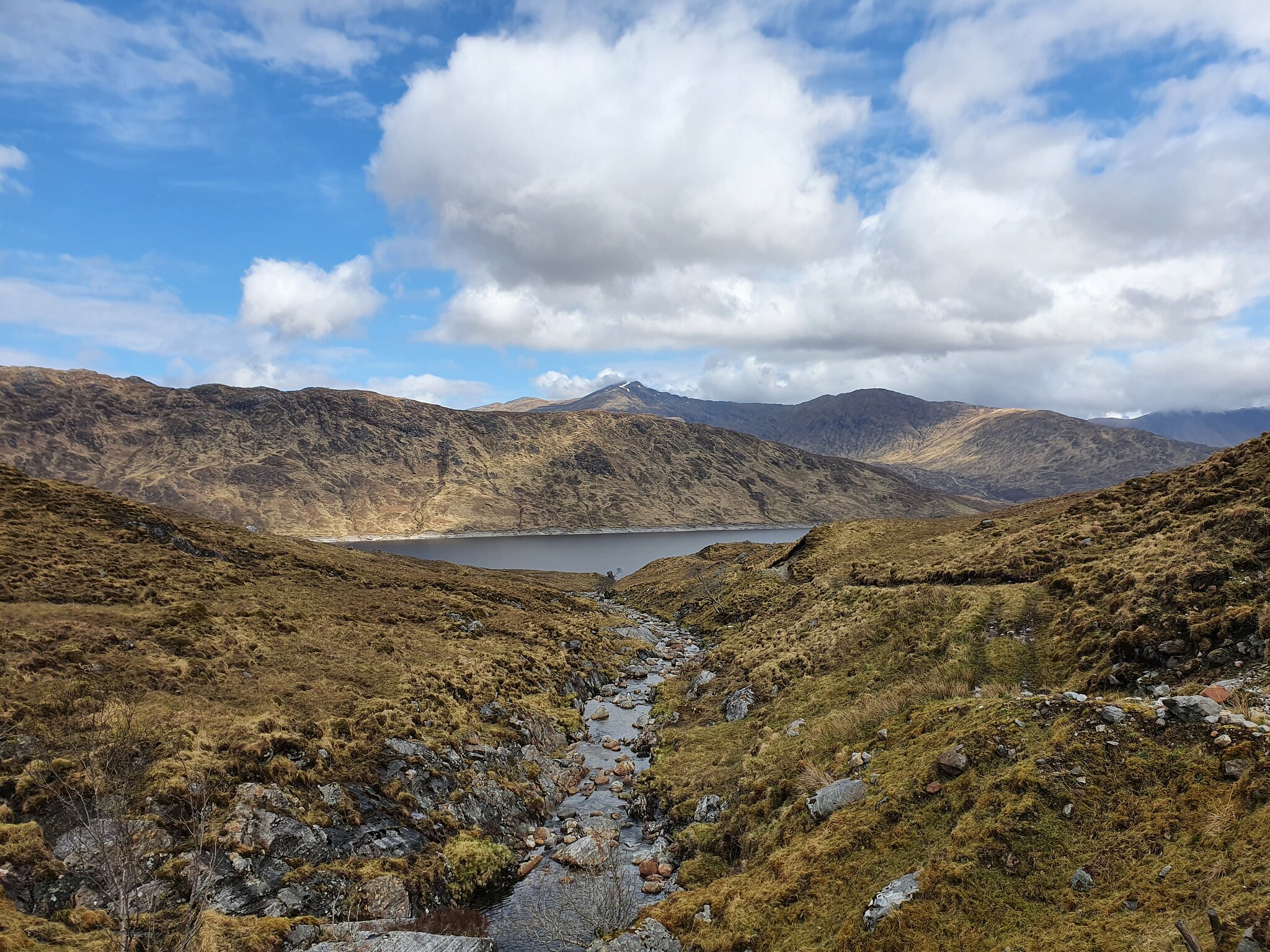 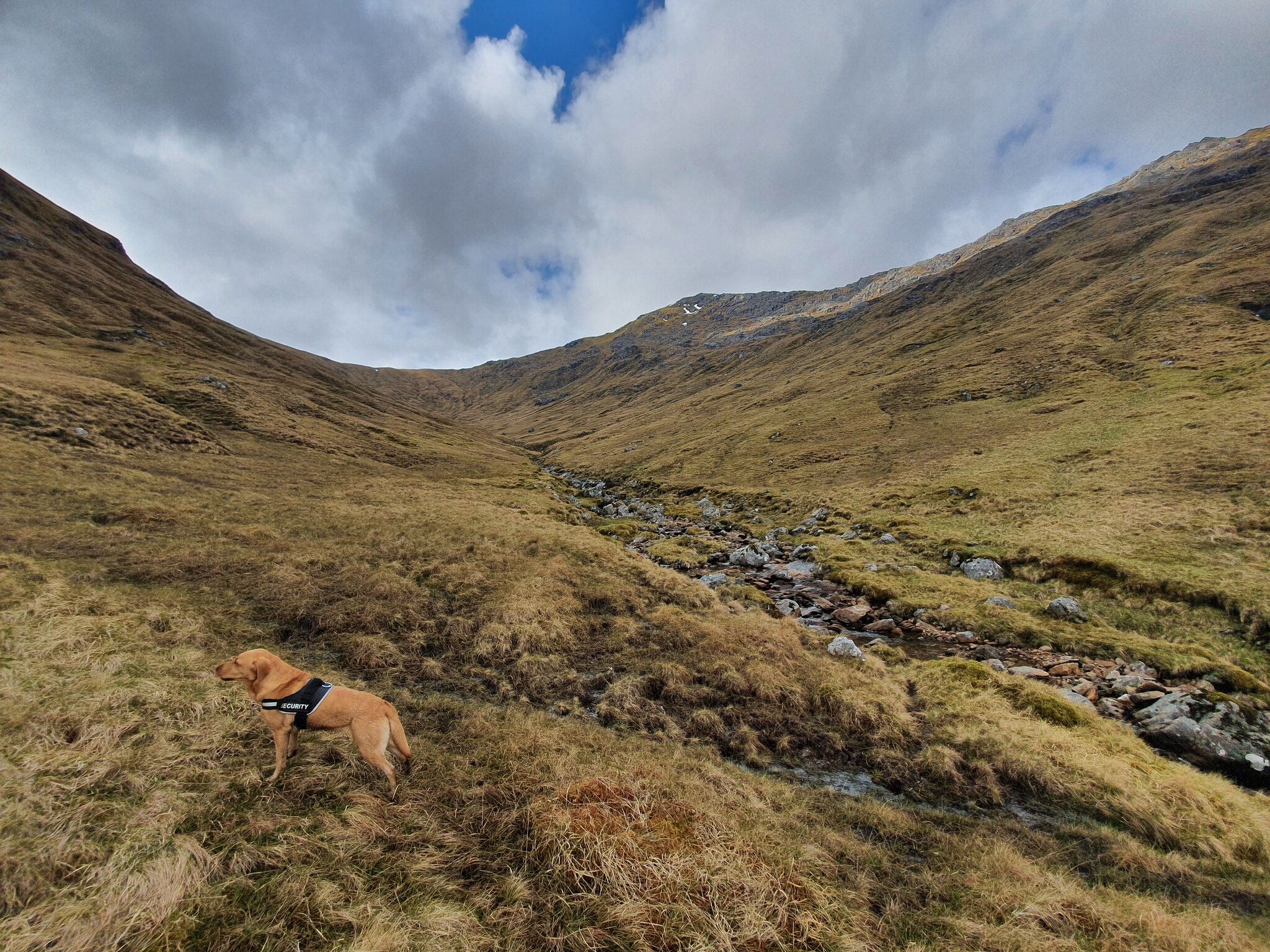 After a short while the track deteriorated to a rough path, then disappeared in boggy ground entirely. A quick discussion ensured about whether to just head for the bealach between Sgurrs Mor and Fhuarain or to strike off up the steep stuff. Another km or two of boggy mush unfortunately lost out to steep but dryer grass. It was certainly steep... 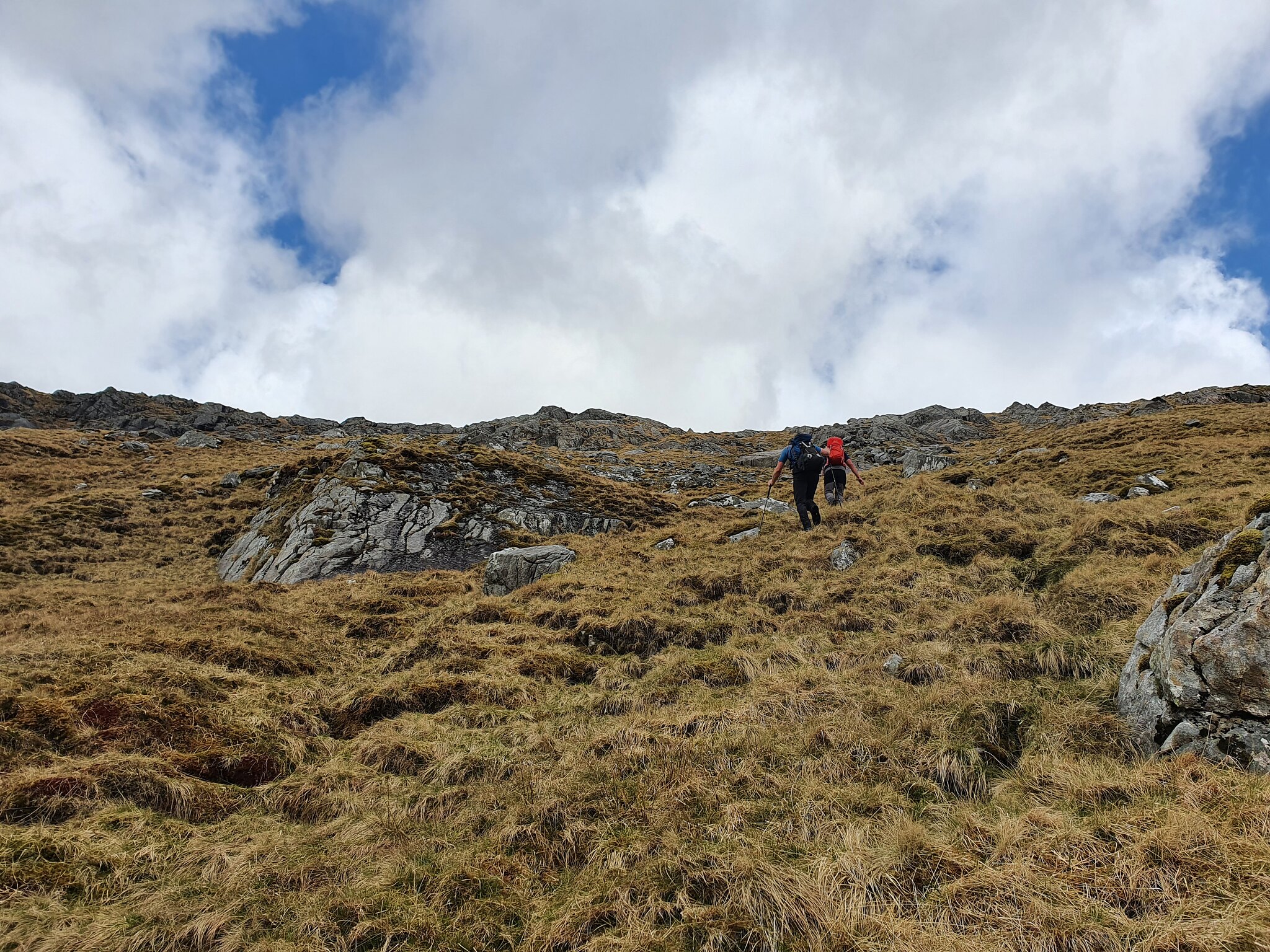 The ascent was an utter calf burner, however quick height gain means increasingly good views and therefore good excuses to stop for a photo (breather to avoid coronary) and appreciate our increasingly stunning surroundings. Yes it's tough terrain and the hills here are hard won, but it's a magnificently wild place. 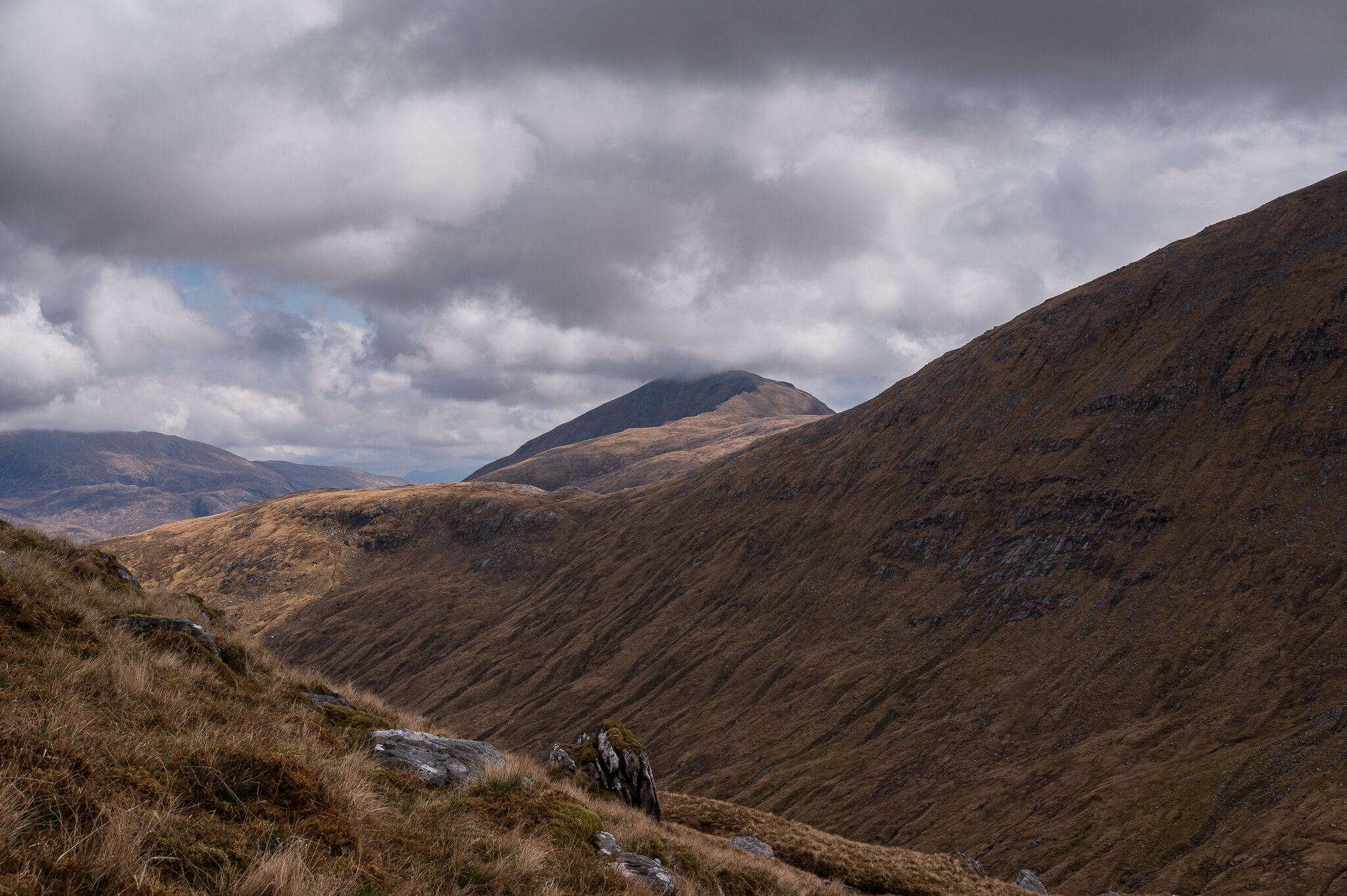 With great relief we soon made the north ridge at roughly 720m. What a view! 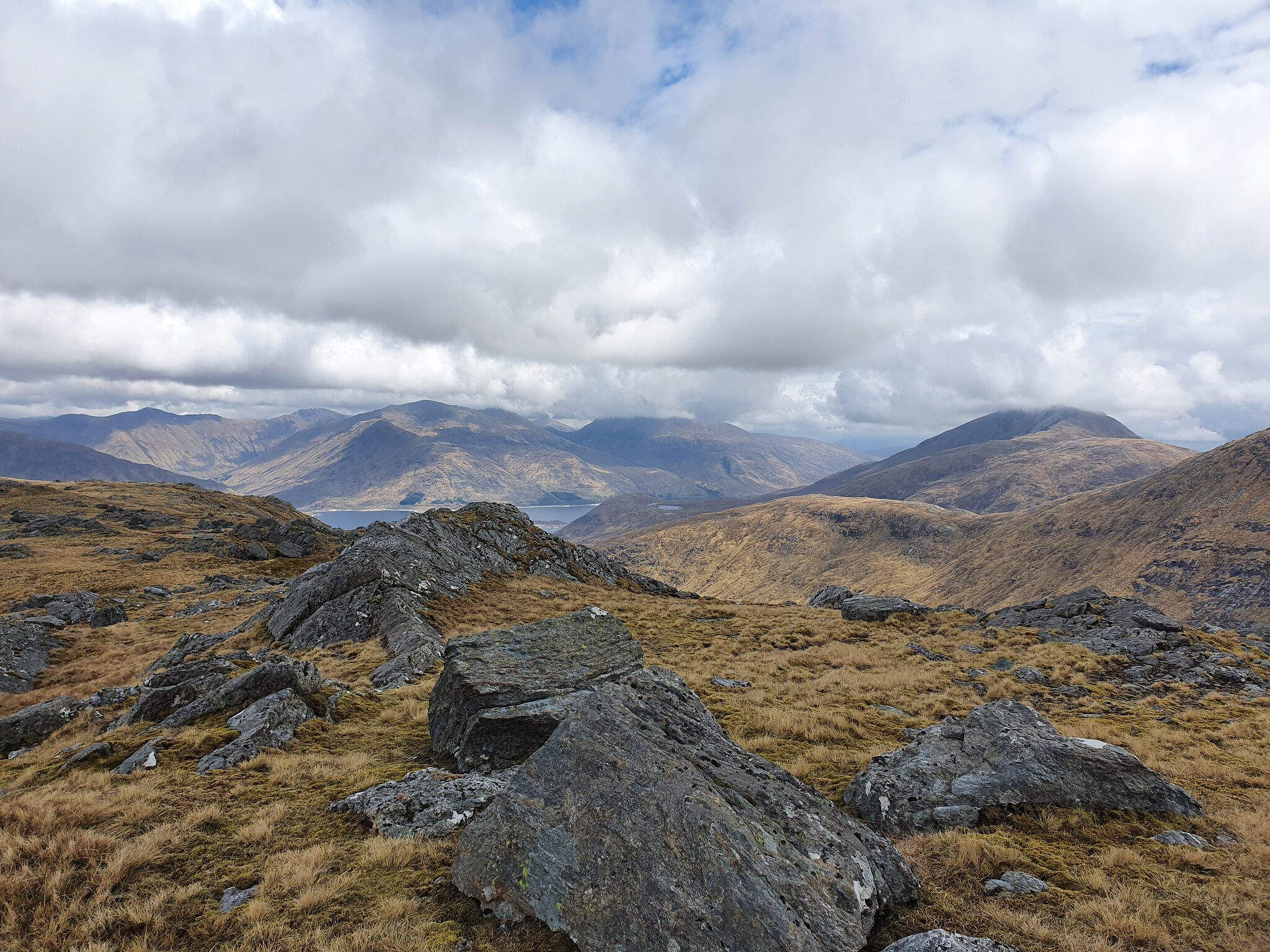 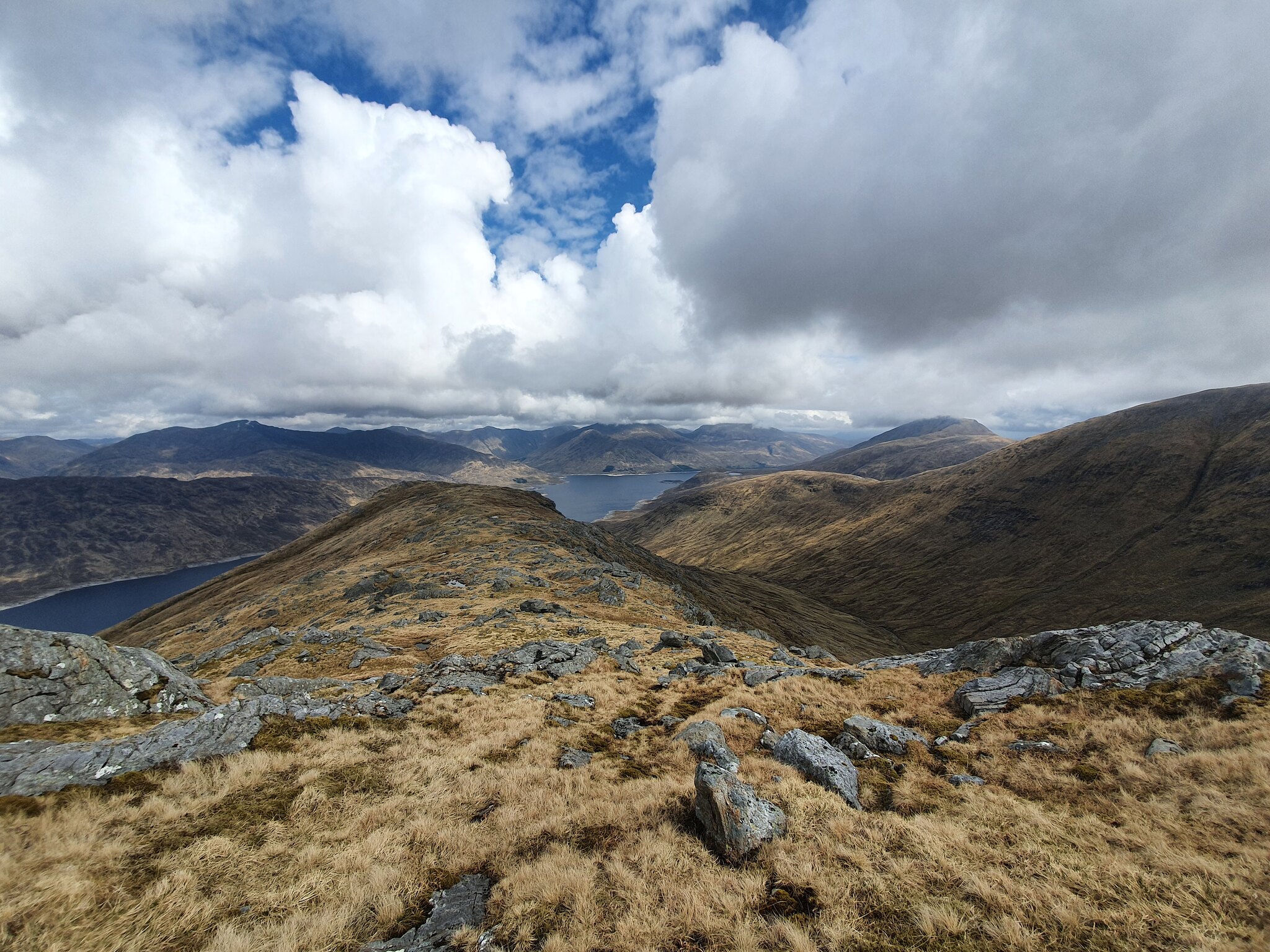 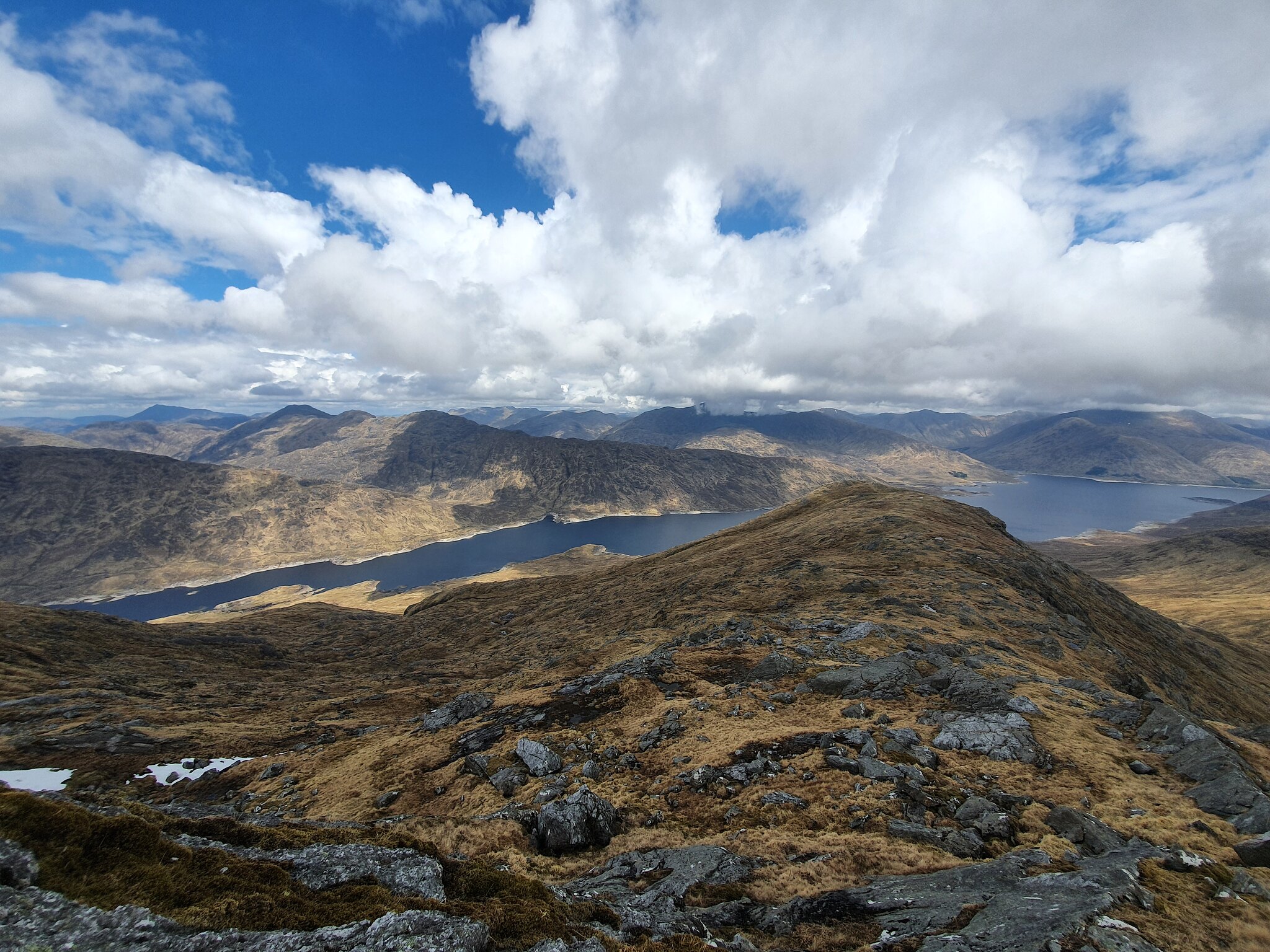 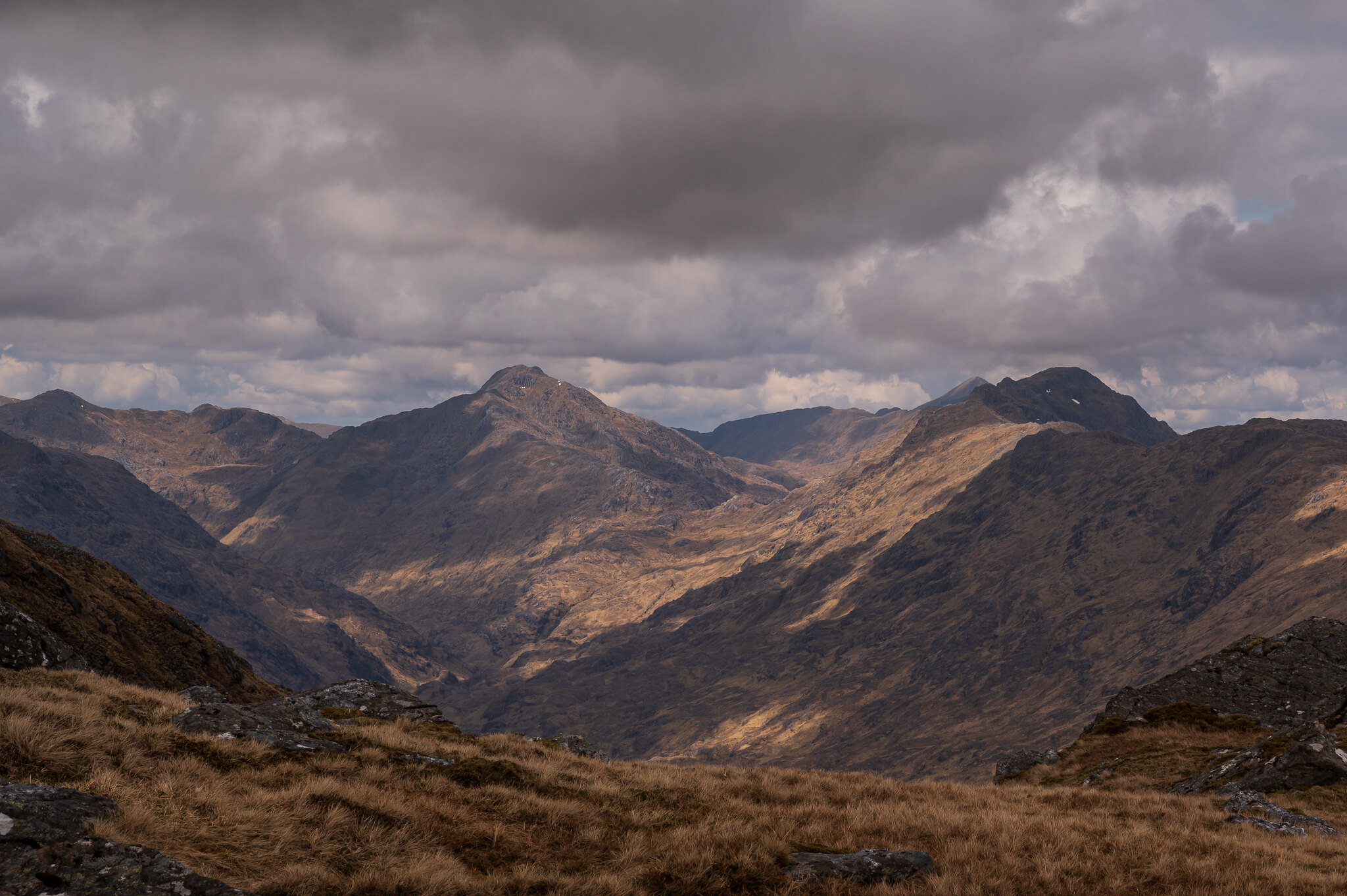 After a 10 minute rest and a quick bite to eat, and numerous photos of the glorious views we quickly noticed that having just hammered ourselves up a very steep and pathless 440m ascent from Coire Buidhe, we had another steep pathless ascent of about 280m ahead of us. Fun. Unsurprisingly, this section was a little slower than the last one. 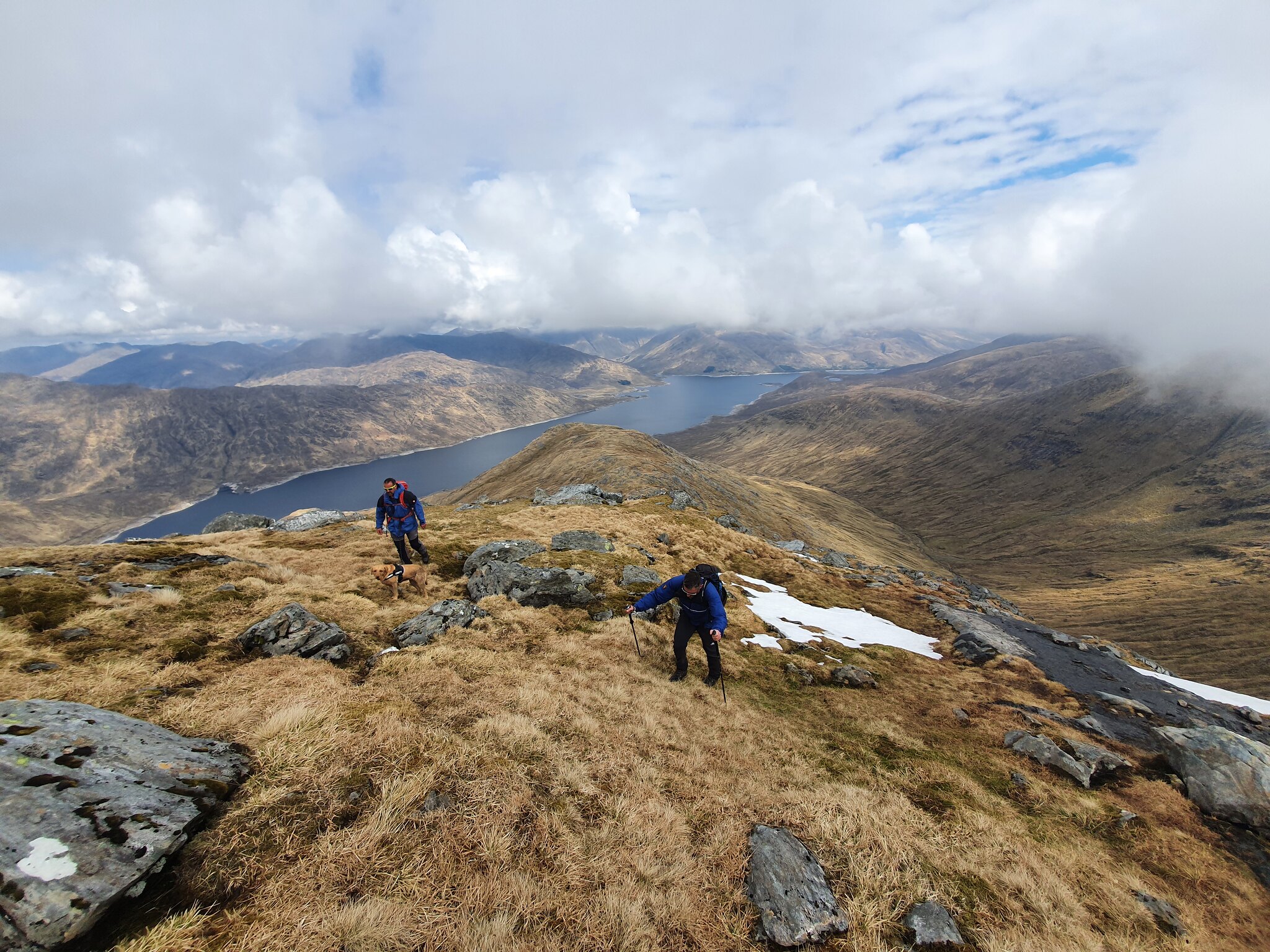 After slowly grinding our way up this steep but stunning ridge we reached the minor top (un-named) and the summit was in sight. Cloud drifted in and out threatening the wonderful views. 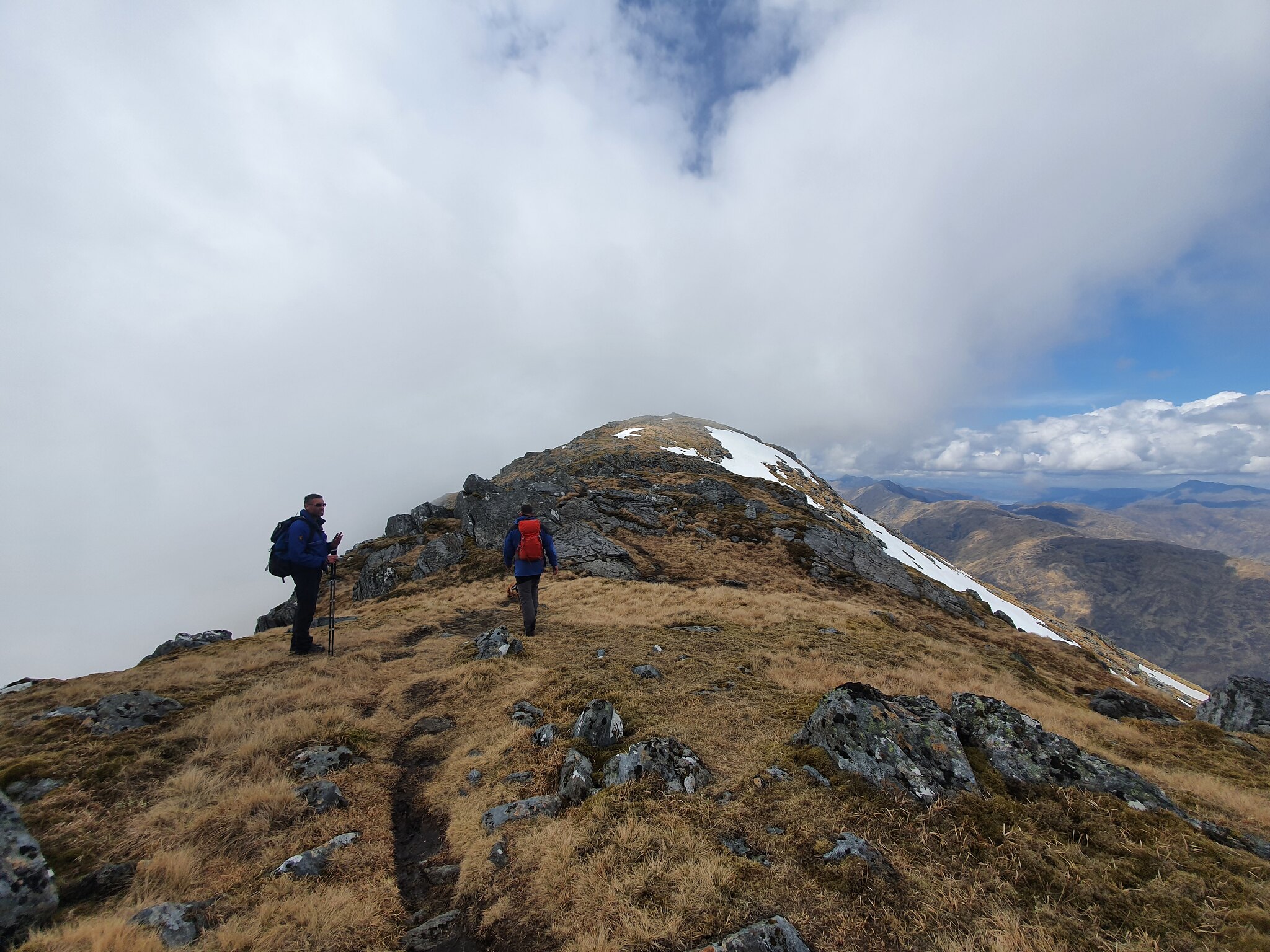 We soon made the summit though, and what a summit! The views, although partially obscured by cloud, down into the upper reaches of Loch Quoich and the Rough Bounds were absolutely mesmerising. We sat for quite some time hoping they would completely clear to reveal Sgurr an Ciche. 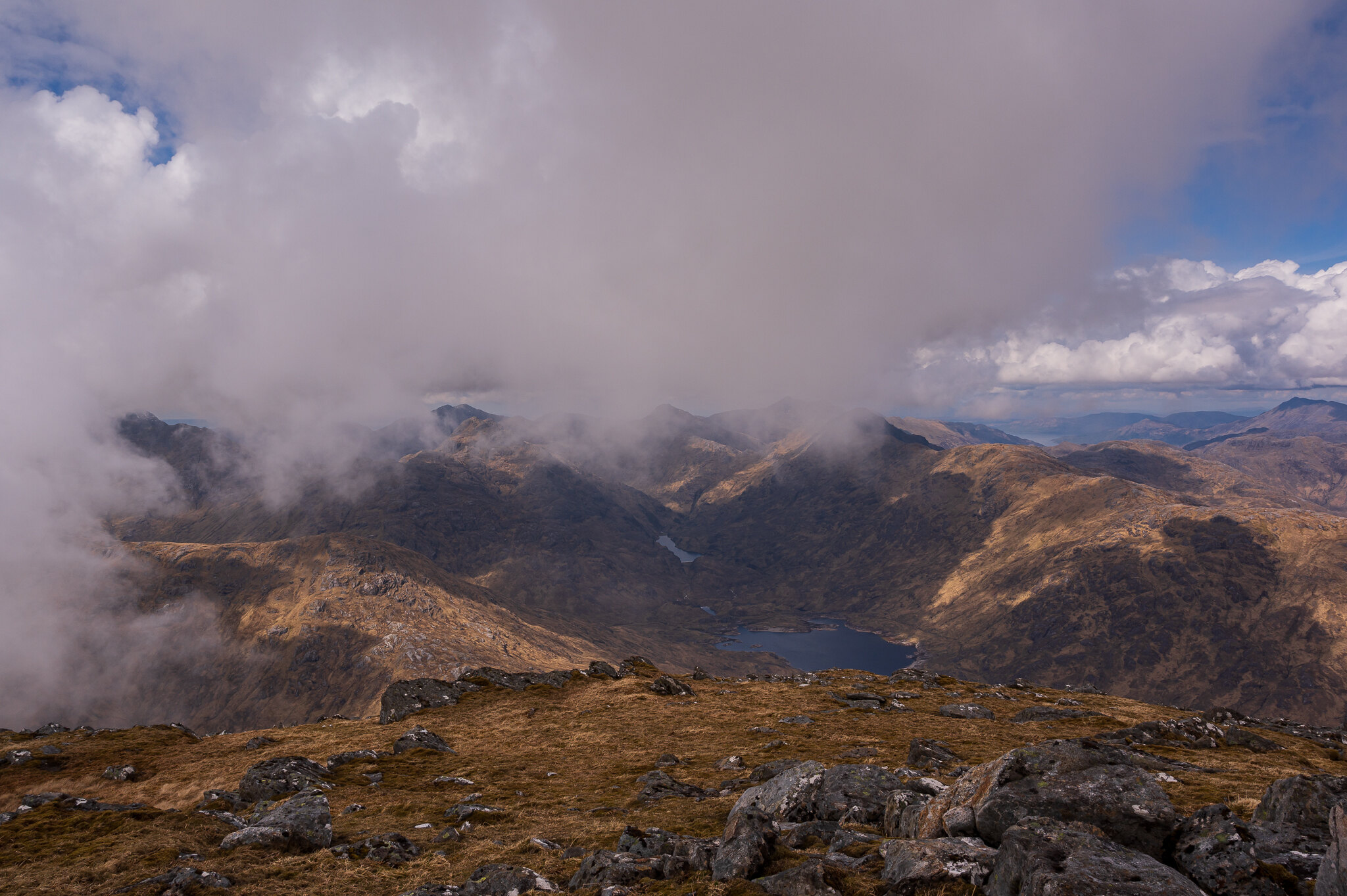 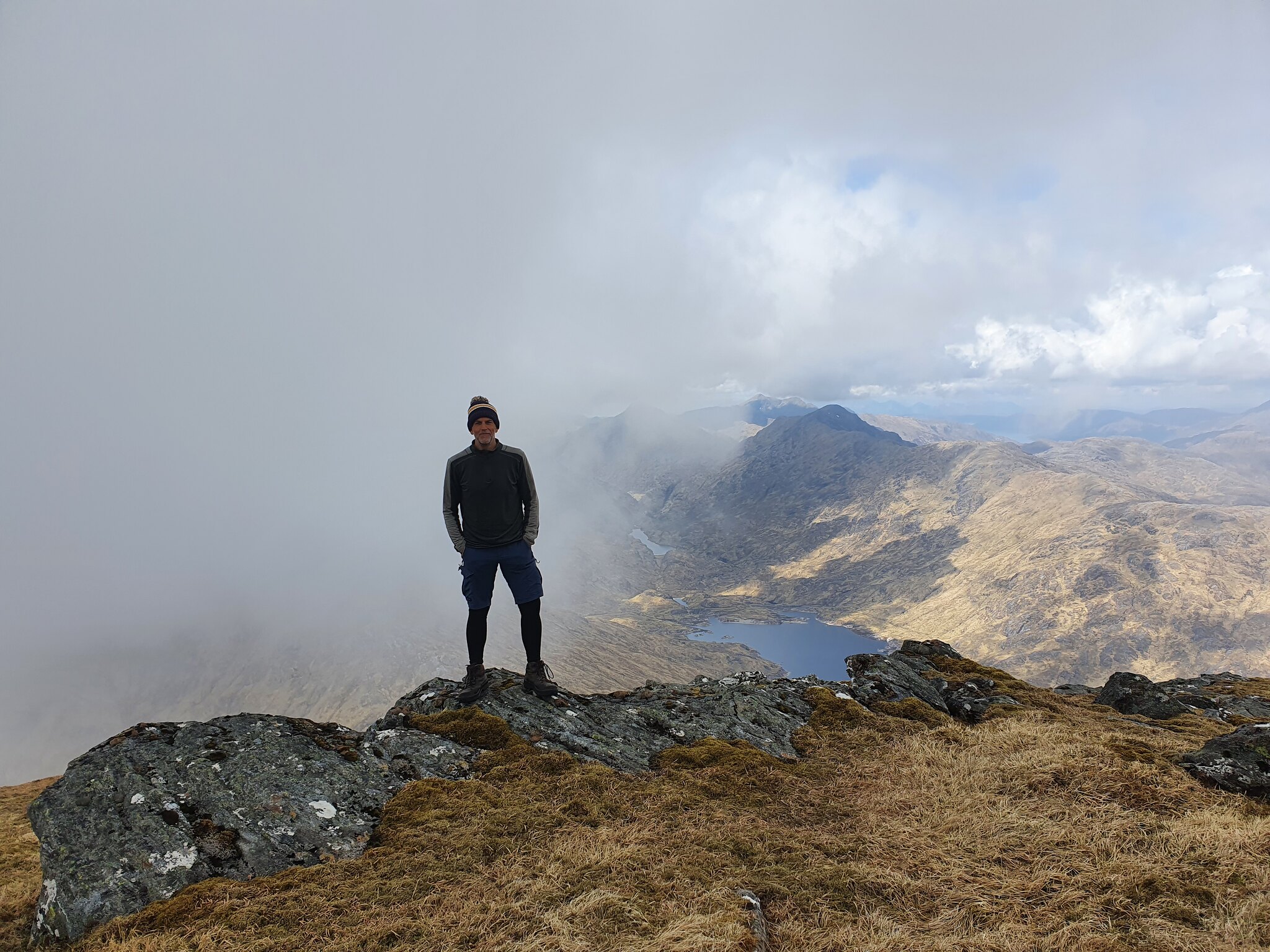 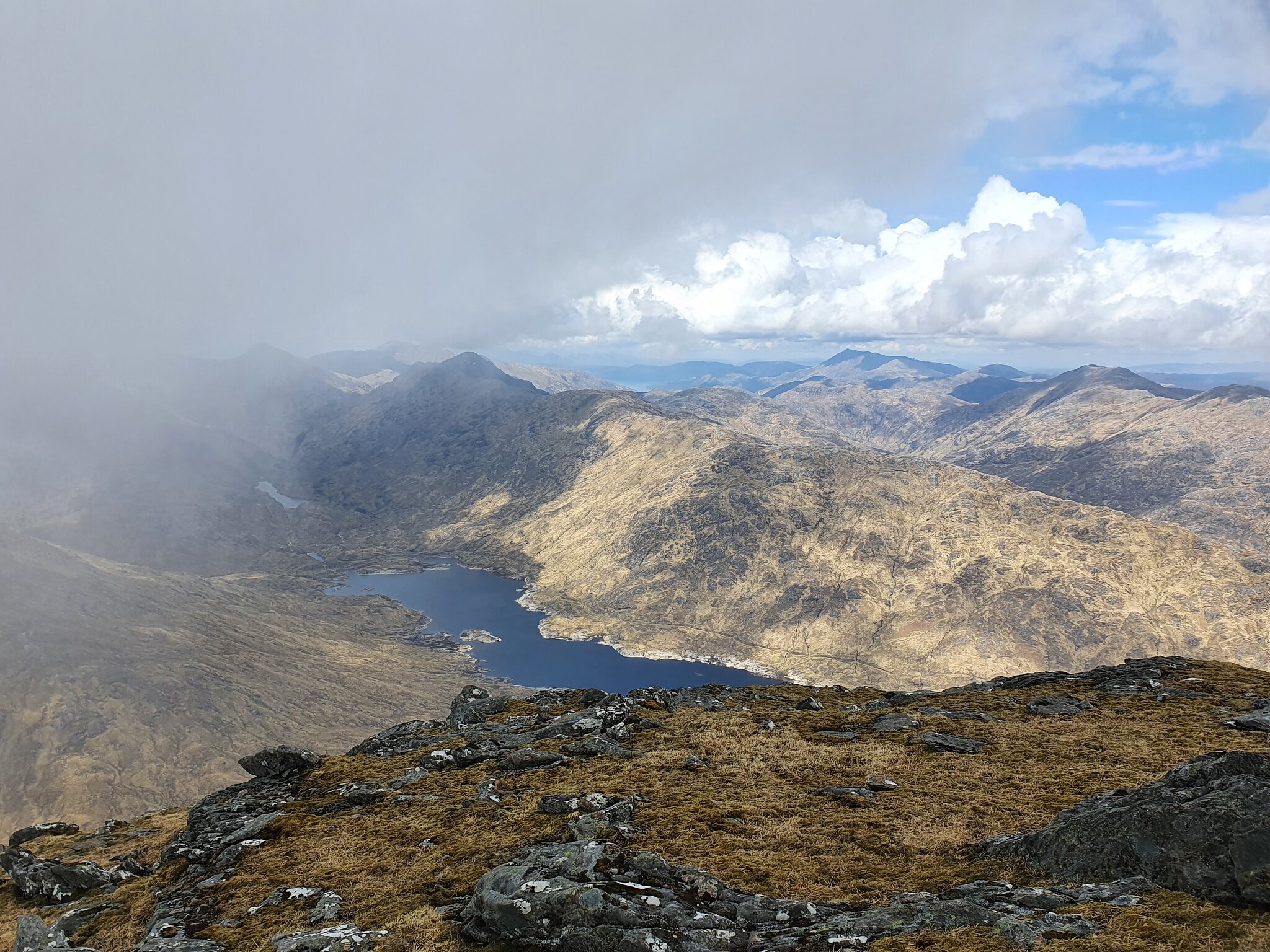 After a while we had to admit defeat on the cloud clearing properly and decided to head off for the neighbouring corbett, Sgurr an Fhuarain, one of the higher in the list at 901m. A good path links the two mountains and the ascent to the corbett is mercifully gentle for the most part. This part of the walk gives continuing fine views of lonely Glen Kingie and the dramatic corbetts of Sgurr Mhurlagain and Fraoch Bheinn across the glen. Gairich is even more prominent beyond Sgurr an Fhuarain. 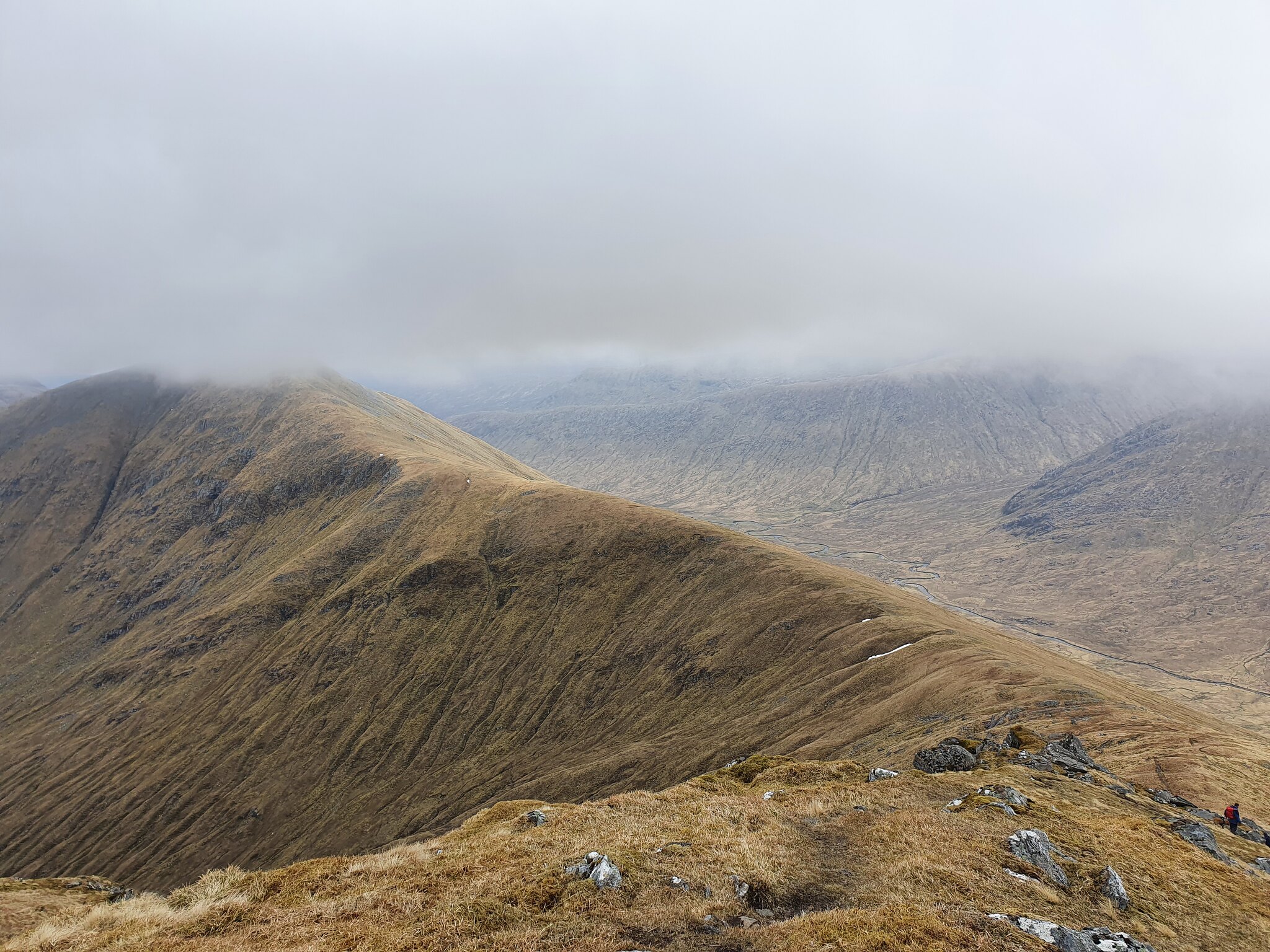 After a fairly swift ascent from the bealach, we made Sgurr an Fhuarain's summit trig. The cloud was down again, so we stopped for a quick bite to eat, and happily it cleared. 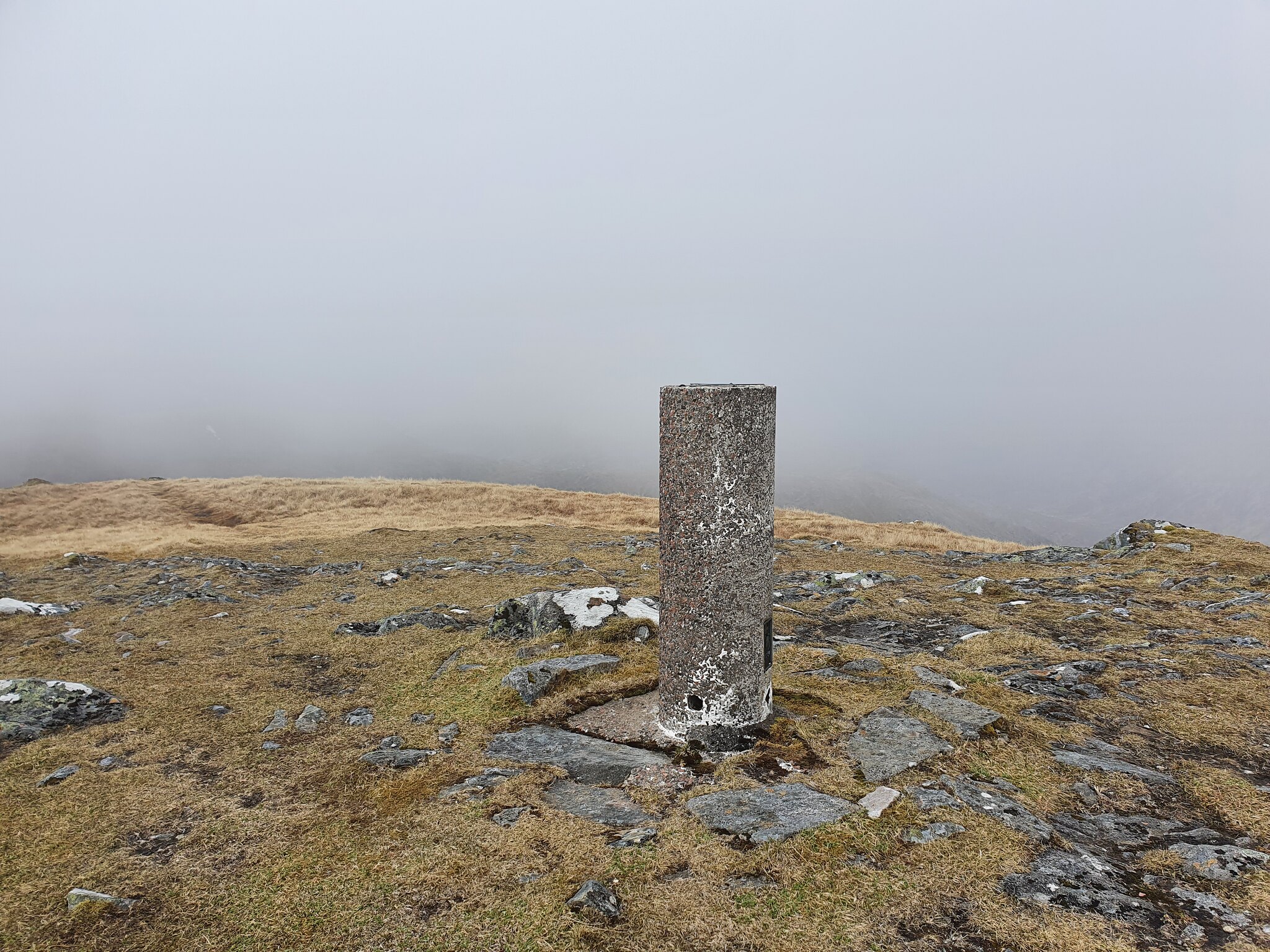 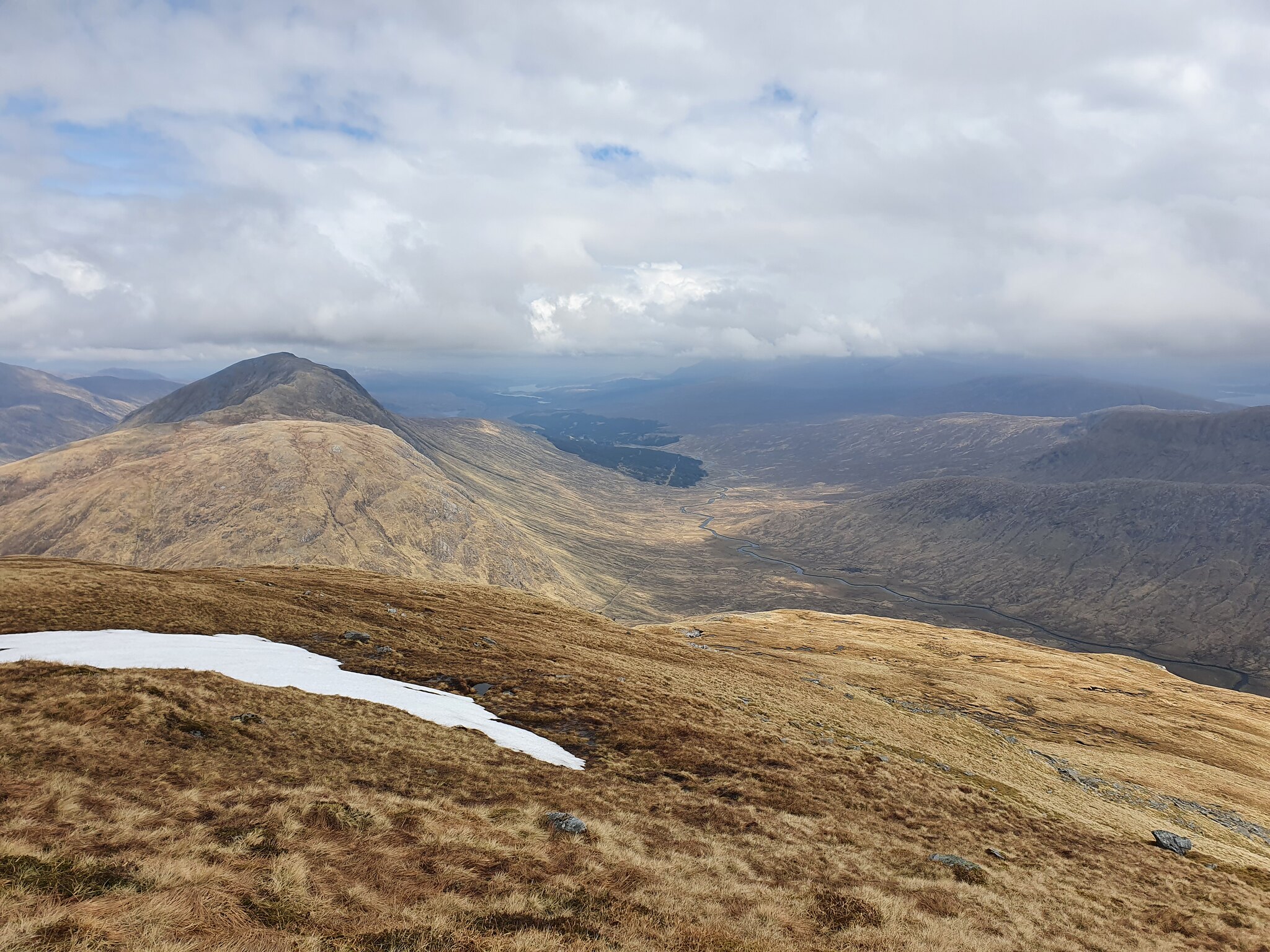 With the chilly breeze seemingly getting strong (please god no) and the lack of shelter up here, we decided to make the descent back to shore. As shown on the OS map, there is a very old and now feint in places grassy path which leads pleasantly down from the summit to the bealach with Meall a'Choire Bhuidhe, whereupon it traverses the eastern side in extremely boggy fashion (perhaps made worse by snow melt). This then rejoins the better landrover-style track lower down which eventually returns to the shore of the loch. 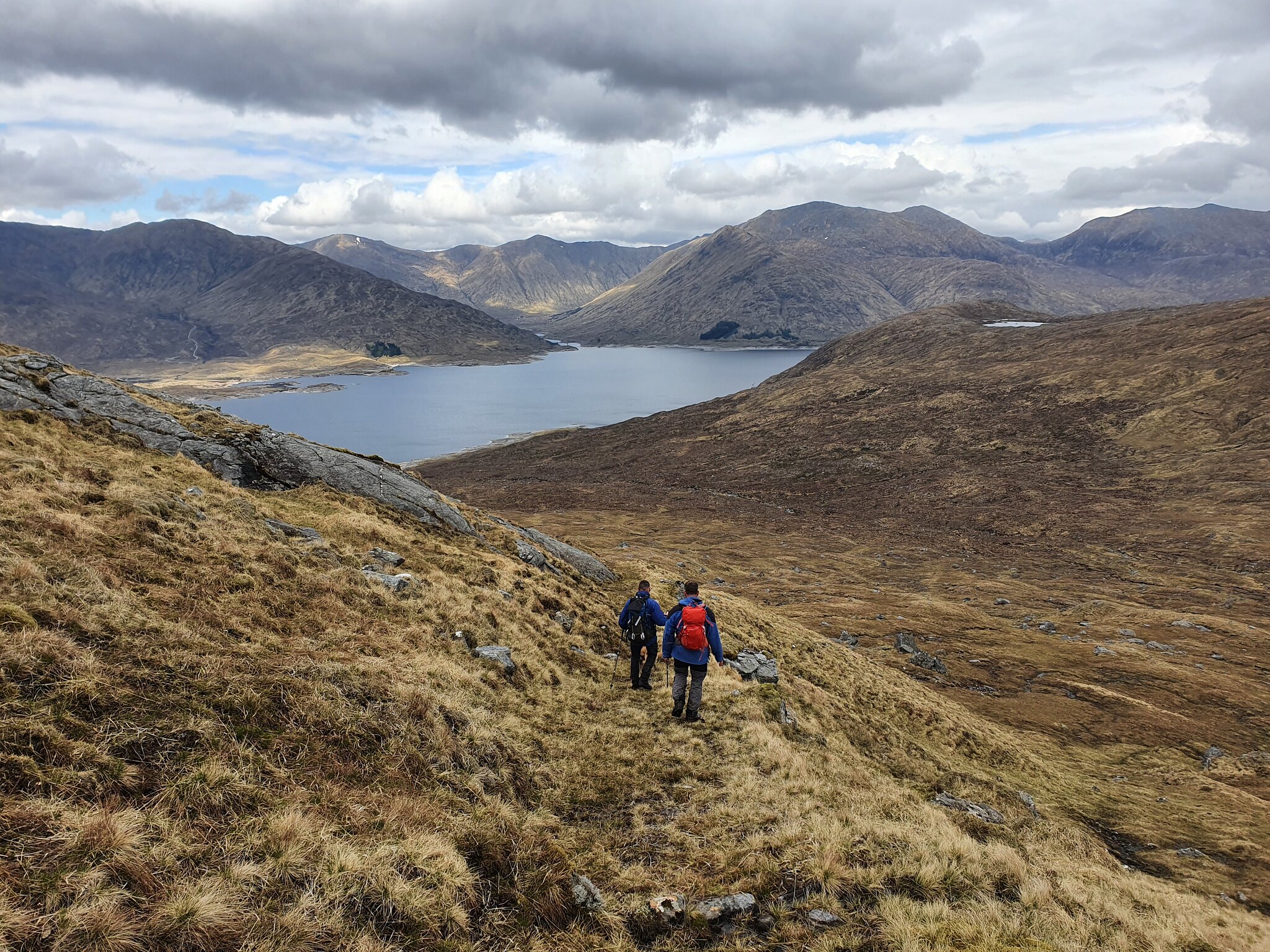 After another change of footwear and packing the gear into drybags, it was time to face the inevitable return across the loch, again in fairly choppy waters. Again myself and Lee set off ahead. This time we took a slightly more direct line as we were now both into/across the wind and paddling into incoming waves is certainly preferable to being hit from the side

Despite heading back into the wind and waves, I was only 3 minutes slower in returning, mainly because I had little interest in stopping to admire the view. It was with considerable relief I reached calmer waters on the other shore, before making my way back to our original put in point. 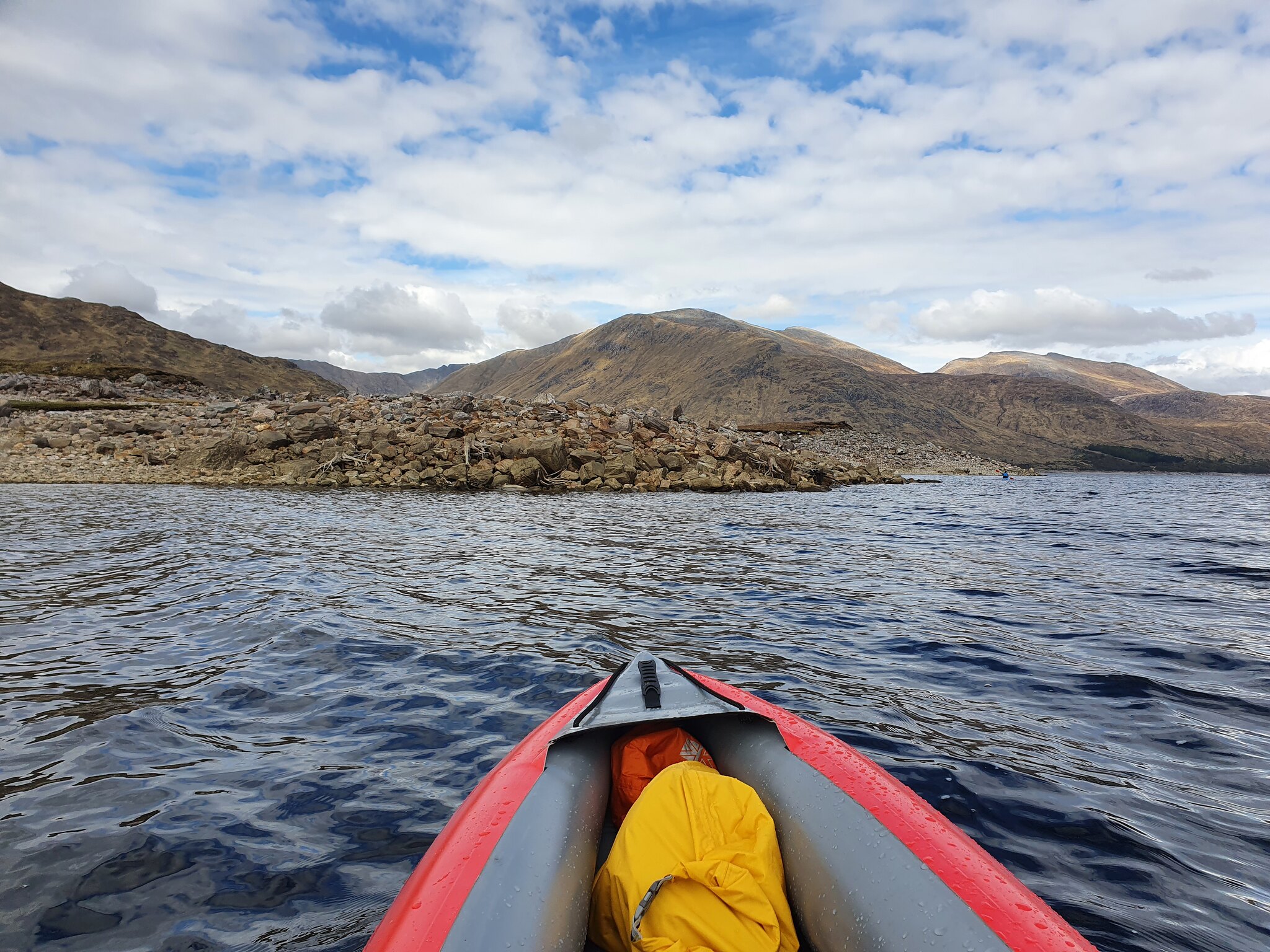 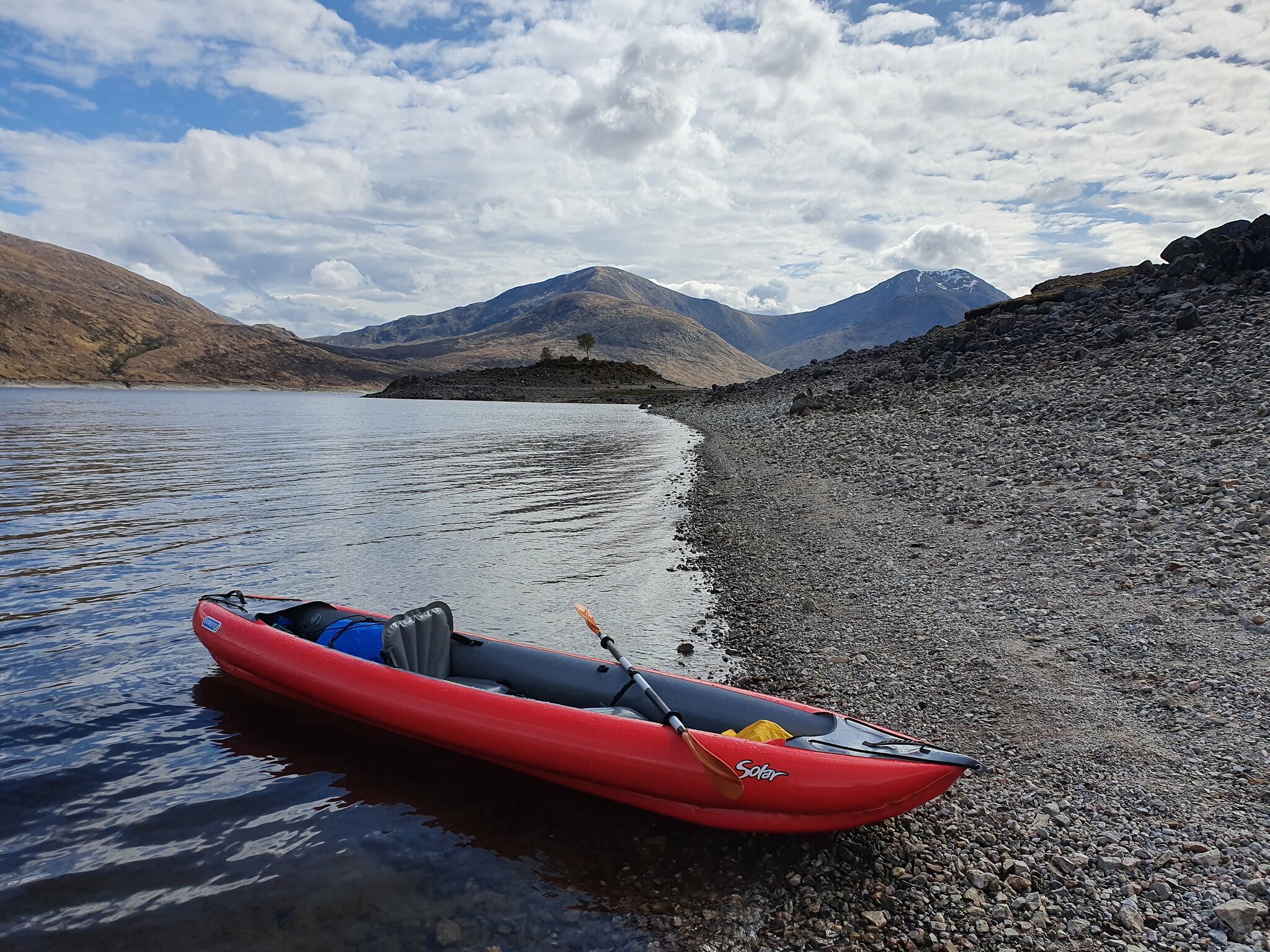 ) and put everything away.

What a trip though. Despite my mild fears of drowning in a loch in the middle of nowhere this was an absolutely fantastic way to approach this hill which is pretty difficult from every direction. "Remote" may well be an over-used term for scottish mountains, but there's absolutely no doubt the term fits these rugged challenging mountains perfectly. Sgurr Mor is a superb viewpoint and more than worth the difficulty it presents in getting there. Sgurr an Fhuarain itself is a fine summit and shouldn't be missed out when visiting the munro.

I rounded off 10 superb days with a quick and fairly easy (but boggy) walk up the windfarm-strewn corbett, Meall Dubh.

Aonach Eagach Return: What a Day!

Summit Camping on Sgurr na Stri - Views to Die For

Five Fantastic Days in the Wilds of the North West