The destination of day three would be Drake's bothy (non-mba) in the Inshriach Forest to camp there or use the bothy. We set out from Ruigh Aiteachain at half past eight and were immediately attacked by the midges. We quickly started moving and followed the very obvious path through the Glen. In the beginning it is still a combination of heather and old and new Scots pine trees. While still admiring the beauty of Glen Feshie we managed to unfollow the very obvious track and didn't enter the Coille an Torr forest/plantation by a track next to river but somewhere else (by a forest track as well). We then also managed to lose this track and followed very small woodland paths. I don't really remember this part and I also don't have any pictures so I've no idea what we did there but in the end we managed to reach the ford over the Allt Garbhlach. 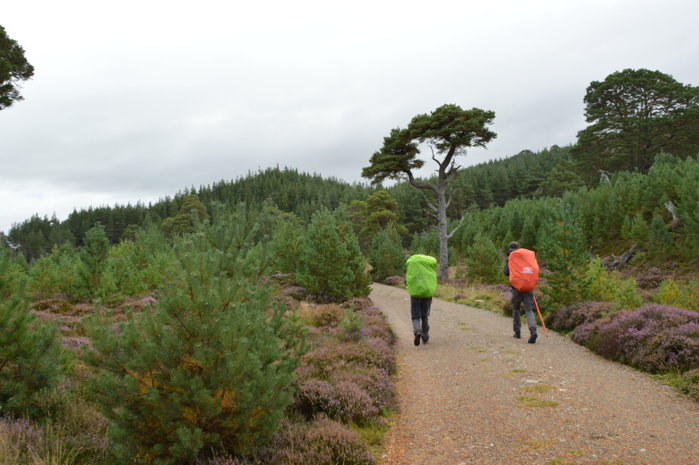 Now, this ford has also a bit of reputation, partly because of the heavy erosion on the sides and the possible high water levels. The high water levels weren't a problem but the path down the steep side to the actual ford was looking a bit dodgy. We descended a bit more upstream, crossed the ford there and then searched a way back to the path. The forest then gives way to a flat heather moorland with nice views. Achleum came into view and it was clear we were gradually leaving the real wildness of Glen Feshie. Some of us had our first telephone signal there in three days and got to check their exam results but I didn't bother. At the junction after the first footbridge over the Feshie we took the path on the right and as such didn't pass Achleum. A bit later we crossed a minor ford and joined the road in Achlean, and by doing this leaving one of the most beautiful places I've ever been to. View north after crossing the ford

In the car park we had a small break before we would have to follow the road northwards for a very long way. Beforehand I had searched for alternatives through the plantations east of the road. Although I believe it is possible we didn't do this because we feared it would take a long time finding the right tracks especially in the recently cleared parts. Later on after crossing the Allt Ruadh I think it would certainly be possible (for the most part) but we didn't bother because we were making fast progress on the road. Also I wasn't so sure about finding our way through the forest to the bothy after crossing the Allt a' Mharcaidh. So in the end we followed the road to Feshiebridge. There is really nothing interesting to say because this was really boring, so I'll skip this. Fast forwarding two hours we reached Feshiebridge and entered the forest once again. These are plantations again but because they are Scots pine (like the one in Glen Feshie) they are not as dark and uninteresting as most other plantations (like in Glen Tilt). I had secretly hoped to spot a capercaillie, obviously that didn't happen.The walking is easy here and in no time we left the plantations and entered the old Caledonian pinewood. The change is quite abrupt: one moment you're in a manmade plantation (managed by the forestry commission) and a few seconds later you're surrounded by old pinewoods (managed by the SNH). This is the Invershie & Inshriach NRR, sometimes called the Cairngorms in miniature because there are woods and open exposed mountain flanks. This remnant of the Caledonian forest is maybe a bit overshadowed by it's more famous neighbors Glen Feshie and Rothiemurchus but it's certainly as beautiful (and a lot quieter). On the way to the bothy we passed some bog woodlands which are fascinating as well and which you can't see at Glen Feshie. Stream below the bothy

At around half past one we arrived at Drake's bothy (property of SNH). This wooden bothy is not very big but charming and in a stunning location. It's located in small clearing in the woods and I didn't lose any time exploring the surroundings. While Ruigh Aitechean is also located in a regenerating pinewood it's more in an open space with a lot of older and newer trees, this one is really in the forest. But I love them both. We decided to sleep in the bothy and installed us. After two and a half days of trekking we had a lazy afternoon. Because of some reason I had an internet connection in the bothy and now I did check my exam results. In the evening a dog walker popped in to see if there were people in the bothy, but he didn't stay. The last (short) day of our four day walk would take us through the forests to Glen More. We started at around nine and made our way to Loch an Eilein. The path ahead was narrow and there was a feeling of really being immersed in the pinewoods. The transition of the Inschriach NRR to the more touristy Rothiemurchus estate was clear, the path becomes a lot wider and maintained, and there are signposts and stuff like that. We passed Loch an Eilein and turned eastwards towards to Lochan Deo. This was a bit of a nostalgia trip for us because at this lochan two years earlier we had the feeling of truly entering the highlands for the first time.The sun was doing its best and we were starting to get too hot. On the way to the Cairngorm Club footbridge we walked (on a decent path) through the stunning bog woodlands. At the footbridge we refilled our bottles and then had a nice walk eastwards with the river right besides us. View to the south when nearing Lochan Deo We were going way too fast, the hostel wouldn't open till five so we had a long rest at the riverside. Beautiful place to wildcamp as well. The last stretch of Caledonian pinewoods was now before us. Making our way through these on lovely paths we entered the plantations around Loch Morlich a bit later. Two years before we had walked here as well making our way to the Loch from Rothiemurchus Lodge, the difference was that now a large part of the plantation had been cut down. To be honest a large part of this final stretch towards the loch was quite ugly because of the felled trees. It will all doubtlessly be worth it in a hundred years or so

. But for now this isn't a very interesting route to take. However we did discover a pretty lochan right before Loch Morlich, well discover: I didn't really expect it to be as beautiful as it was so had ignored it when I was viewing the map. We had a break at the footbridge over the Luineag river and then followed the path next to the road to Glen More. Well that was it. Our Cairngorms connect walk was finished. We chilled at the beach and had our tea before checking in at the hostel. I will remember this walk as the most impressive I've done. There weren't any mountains but the variation of landscapes compensates that fully. There are small valleys, wide open valleys, moorland and impressive old forests. I will especially remember the pinewoods in Glen Feshie and Inshriach and the wide nothingness of Glen Geldie. Glen Tilt is also really worth it, but next time I would cycle it (or at least some part). Sadly there are some minor parts where we had to walk over the road or through plantations. Also, nothing went wrong for the first time! Exploring the Isle of Eigg (& Mallaig)