Discovery of the Met Office Five Day Forecast that may be searched for a specific hill and gives an hour-by-hour assessment of the likely conditions has extended greatly the possibilities for my weekend walking. While the whole of the country seemed to be covered with grey gloom and heavy showers, I was able to identify Schiehallion as one of the few potentially mist-free and dry Munros, at least by the afternoon. As my sometime walking buddy JimJums had just bought himself a flash new car, I thought he might but up for a bit of a spin down to Perthshire. What I hadn’t realised (naïve person that I am) was that his car wasn’t one that was intended for actually driving. Sporting a thousand pound exhaust system and suspension so lowered it can scarcely negotiate road markings a little on the thick side, it is much too fancy for such an everyday function. No, this yellow peril is for polishing and posing around. So while he was up for Schiehallion, we would have to travel in my car, whose latest infirmity is a broken heater system. At least my Labrador Charlie would be able to come with us. I arrived at JimJum’s a little after 9 am. At 11.30, Jim declared himself ready and we left, arriving at the overflowing Schiehallion car park at 1 o’clock anxious to get the feeling back into our frozen extremities with a stiff walk. Just as well as it would be dark by 5 pm and WalkHighlands reckons it’s a four to five hour expedition. Those of you who follow Dogplodder’s walk reports will know that Charlie is the Ali G of the dog world (he’d prefer to be a black Labrador) and his first task on any outing is to find a black, muddy hollow in which to wallow. 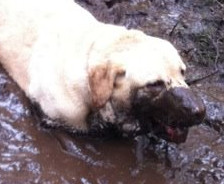 Is it ‘cos I is black? Yes, Charlie, it is! His second task is to run ahead on the path to find the next group of walkers and greet them by pushing his muddy snout into their crotch (well, that might be the third act, after he’s blagged some food off them). As most of Perthshire seemed to have climbed Schiehallion that day, he had his work cut out.
The Met Office forecast for clear skies and sunshine was a tad optimistic but a watery sun was shining through thin white clouds and the visibility was remarkably good with fine views down Loch Tummel and across to the Cairngorms. I have always loved Perthshire in the autumn and she was looking particularly splendid that day, clothed in rich russets and ochres and studded with dark grey-blue lochs gleaming like polished gemstones. The path was excellent and climbed fairly gently up and round the hill, offering now views to the Glen Lyon hills and down to Glencoe, then as we reached the top of the ridge, West to a cloudier Lochaber. The Munros were easy to pick out as the snow level was around 800 metres so each wore a neat white cap. Initially we thought we’d reached the summit in record time but as we approached the dry stone shelter we’d mistaken for a cairn we saw the stony humped-backed whale of the true summit emerge from behind. 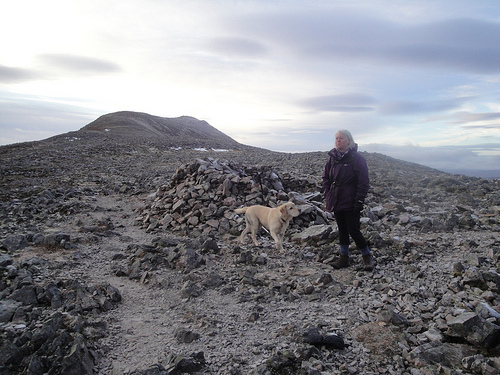 As we crossed the boulder field the going became tricky. A thin covering of snow had fallen earlier in the day and was making the boulders very slippery and obscuring any traces of footpath that might have made the way a little easier. I followed the footsteps of a large-footed someone who had taken, it later transpired, an improbably difficult route through large boulders that required, at least for someone of my diminutive stature, a four-limb scramble. It was prime ankle-breaking terrain. It was only 3.30 pm but light was already fading as we reached the summit. I wanted to get back down the mountain to the decent path as quickly as possible. Navigating the boulder field in near-darkness was not something I liked to contemplate. JimJums didn’t share my anxiety and spent ten minutes taking photographs. 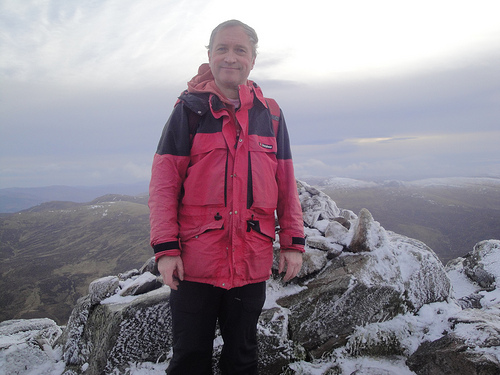 In the event Charlie was the only near casualty, slipping and wedging himself into a crevice between two boulders his front legs immobile and pointing hopelessly into space and his back ones scrambling helplessly on an icy surface. He freed himself before I got to him and was none the worse for the experience, but I did wonder what the protocol is for a dog with a broken leg on a mountain. Would rescue teams be willing to come out? Do they have a vet on call to assist in such emergencies? 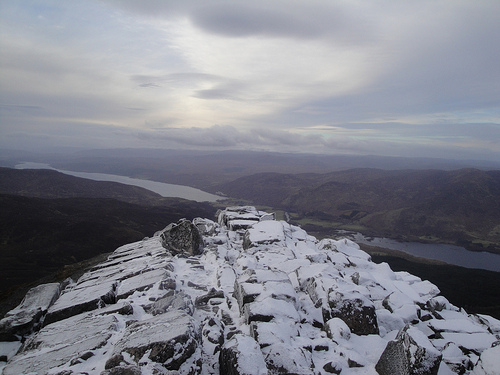 We found a better route down from the summit with fewer and smaller boulders and the makings of a path could even be seen in places. We passed a runner and dog making for the summit. It was a relief to know we weren’t the last people on the mountain that day. 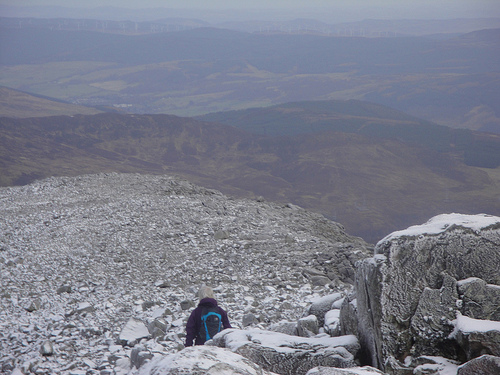 Passing the stone shelter we got ourselves onto what was probably the original, now-decommissioned path that used to head down the northern flank of Schiehallion; the route quickly became boggy and indistinct. I realised our mistake and that we needed to be on the south side of the ridge so began to walk in that direction. I was a little concerned that we may not have found the true path so was relieved to see our runner friend on the horizon and knew that was where we should be.
We still hadn’t eaten lunch and now felt confident in stopping to do so. A hot cup of tea was most welcome but Charlie snatched my sandwich from my hand and swallowed it whole. He has form in this area having snatched Dogplodder’s lunch on the day we climbed Slioch!
The walk back to the car took a further hour and we arrived just as the final light was fading. By the time we reached the Strathtummel Inn the night was tar black. As we sat by the wood burning stove mulling over the day. JimJums said he thought it an ideal beginner’s Munro; I am not so sure as that boulder field was very long and tricky and even in ideal conditions would be challenging.
We were agreed, though, that it had been a fine day out and raised Edwin Morgan's most appropriate toast: Schiehallion! Schiehallion! Schiehallion!
http://thecurseandthecure.co.uk/2011/11/29/edwin-morgan-canedolia-an-off-concrete-scotch-fantasia/
Click to mark this as a great report. Register or Login free to be able to rate and comment on reports (as well as access 1:25000 mapping).