Extensive sunshine! Almost certain Munros will be cloud free! Precipitation very unlikely! You can't ignore an MWIS forecast like that, even though they have been somewhat dubious recently. That said at 10am on Thursday, my only possible Munro day for a long time, I was running around Ayr like a headless chicken and at 11.30am I was running around Glasgow like a headless chicken but somehow or another I found myself suncreamed, fed and ready to go at the carpark at Inverlochlarig at 1.30pm, which was completely packed. It was an absolutely glorious day, temperature well into the early to mid 20s and barely a cloud in the sky. I followed the Walkhighlands route along the path and turned off at the farm where the stile is. The WH route says there is a diversion here but there was no sign of it for me. Either that or I wasn't looking properly...

The path continued pleasantly through the valley between Beinn Tulaichean and Stob Binnein via a really big cow pat. All was going well until I turned off the path and began the ascent proper. So. Sweaty. An afternoon ascent while recovering from a cold in that heat was pretty grim and involved lots of huffing and puffing and wondering why I do this to myself. It was very much a day for setting extremely small targets, regularly failing to reach them and then stopping anyway. The going was very steep and I was really struggling in the heat but mercifully reached the plateau around 750m and found an ideal chocolate chip cookie stop where I refuelled and had a stern word with myself - I needed to realise that today was not a day for beating world records but for making the most of the long sunshine hours and keeping myself hydrated. With that in mind, and the fact that the worst of the ascent was over, I set off for the rest of the walk which was much more enjoyable that the previous 750m, but not before I took one last look at the stunning views back down to Lochs Doine and Voil. 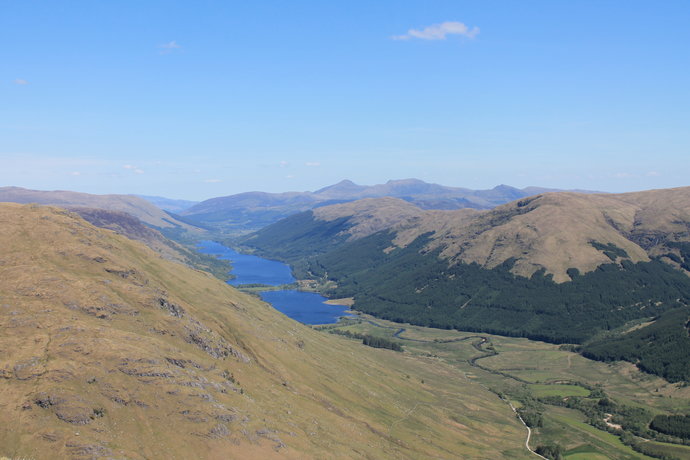 Definitely a break for a photo and not for a breather, honestly...

From here, I started to pick up bits of a path and this combined with the more undulating profile of the hill meant the going was much better and it wasn't long before the summit of Beinn Tulaichean was reached. The views were absolutely fantastic in every direction and I wanted to stay forever, but Cruach Ardrain was looking mighty so after a few photos I had to crack on. By now I was really enjoying the walk and appreciated the downhill section to the bealach before heading up the winding path to the summit of Cruach Ardrain. Here I met the first and only other people on the walk, despite the full car park, who were clearly still buzzing from the views at the top. This spurred me on and, although it looked like a long way away from the bealach, the summit didn't take too long to reach at all. The views really were incredible; I particularly enjoyed seeing as far North as Ben Nevis on the horizon and from my sunbaked position in the Crianlarich hills noting that it appeared to still be in full Winter conditions - crazy! 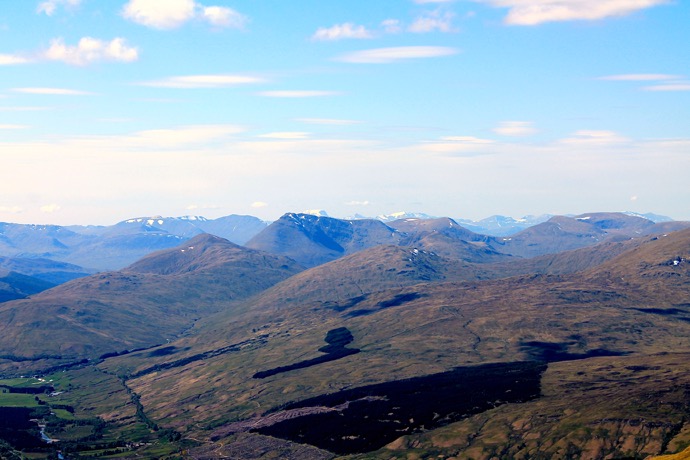 Ben More & Stob Binnein again, this time from the summit. Looking back at Beinn Tulaichean which now seems tiny!

The ills of the ascent were long forgotten as I basked in the late afternoon sun and pondered how lucky we are to be able to enjoy views like that at 5pm without a concern in the world. Having said that, I eventually accepted that I would have to descend at some point and grudgingly did so towards the bealach. Once there, I turned off making a beeline for the path. This beeline did occasionally leave me stranded atop a crag and as per usual I appreciated the lack of bystanders to see my graceless descent off from them. Anyway, onwards and upwards... or in this case downwards... I was back on the path eventually and was enjoying the evening sun so much that I even started jogging at one point... before stopping about 10 seconds later.

I often find that the end of a walk towards the car is the worst bit and that I'm looking forward to its sanctuary but on Thursday it was with a heavy heart that I returned as it really was so peaceful, warm and beautiful; I wish I could have stayed until sunset.

My summary of this pair: a tough initial ascent but an enjoyable walk between the two peaks with gorgeous and varied views all round - a cracking day out as per! And the reason for the title? Two words: four litres. The perils of solo Munro bagging: dodgy self-timer shots making the proceedings even cringier than usual.

Solar Eclipse on Mayar & Driesh: Racing The Moon & The Clag