a battle of Glenshee 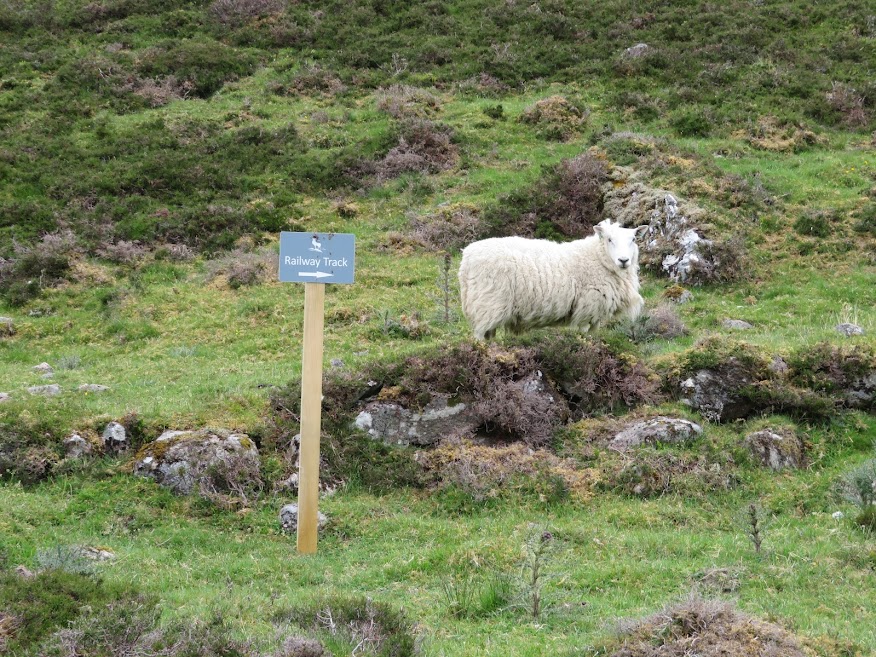 Clearly a sheep and not a railway track. 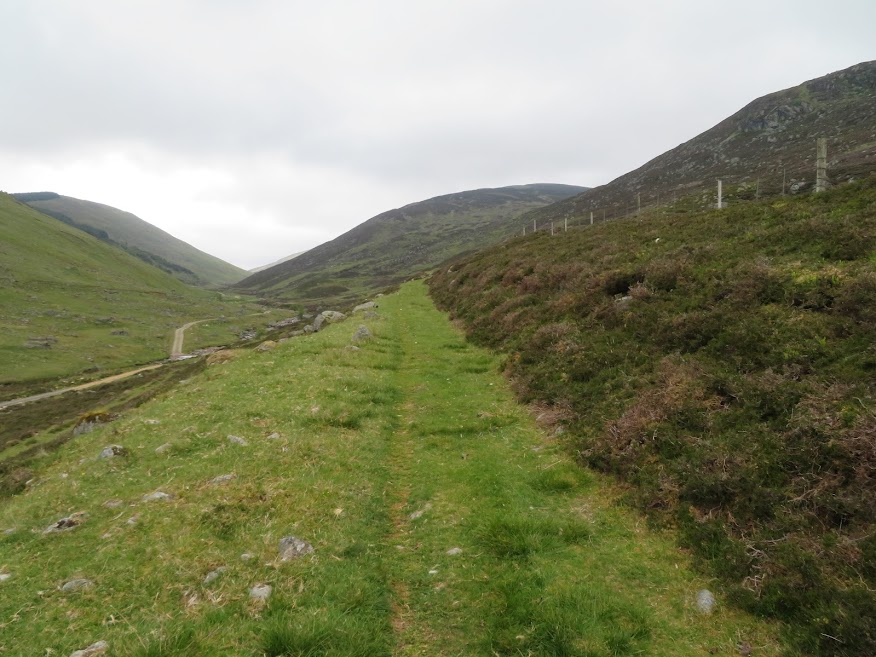 Easy going to start with but a bit boggy later. 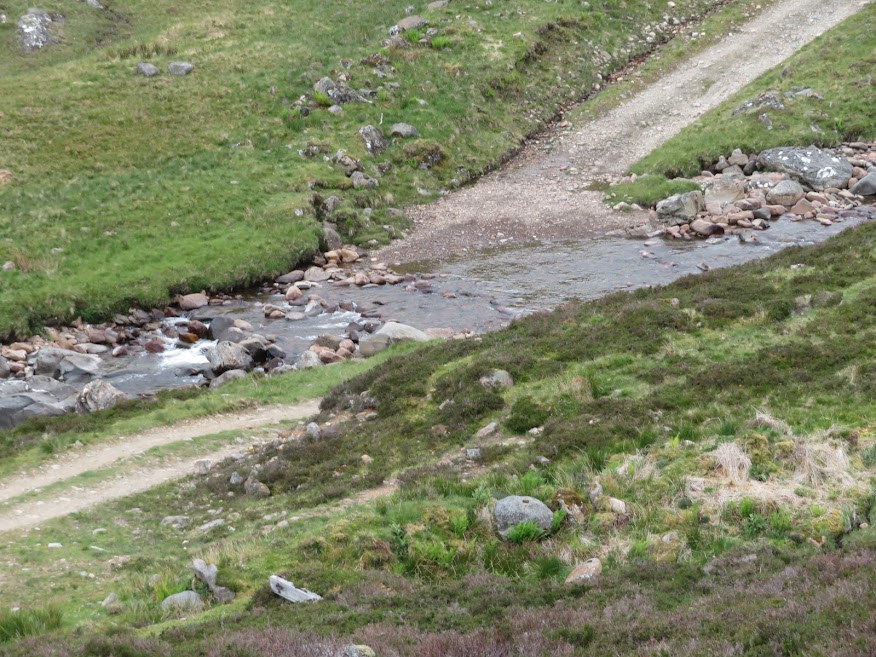 The alternative to following the railway track. 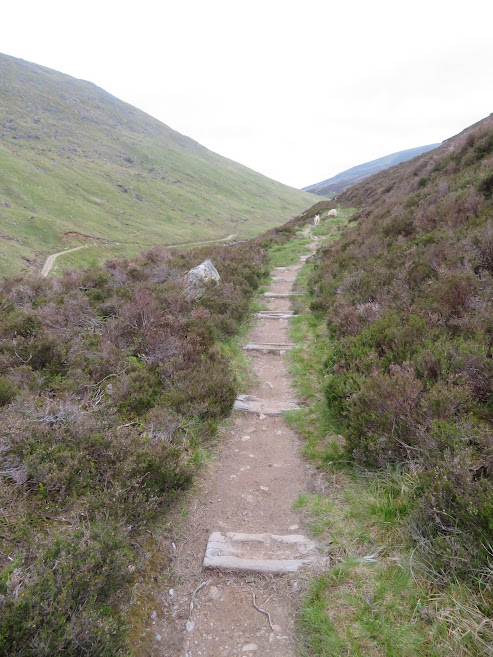 I made the mistake of cutting off from the railway track before the bridge that I now realise is there. That meant a nervous and unnecessary burn crossing. Still, that served to wake me up a bit. 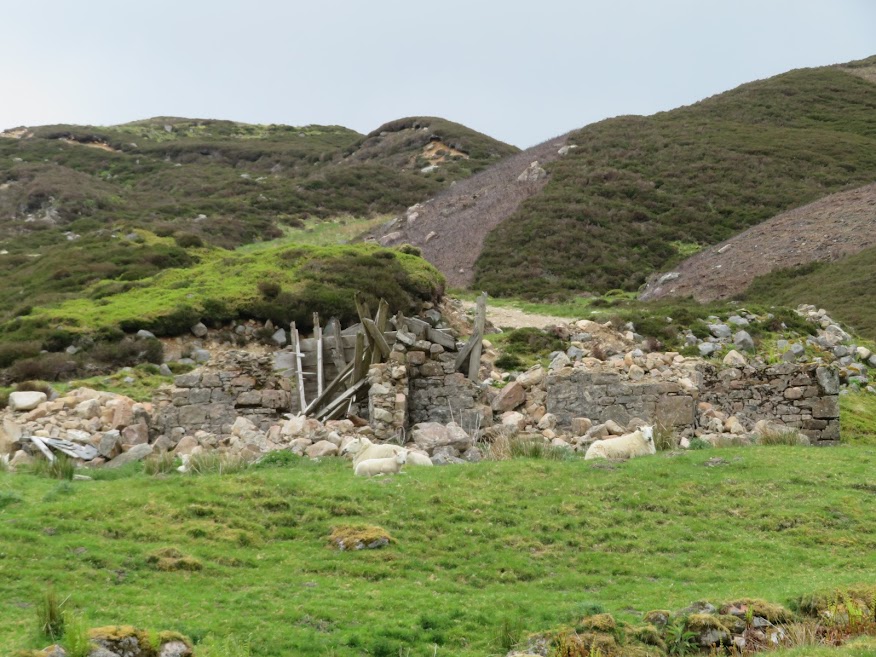 Glenlochsie Lodge ruin. I note from other reports that the roof collapse (I assume its roof collapsed) was relatively recent.

The morning brightened, as forecast. However, the mainly dull first half of the final ascent via the landrover track did not really inspire. A bit higher up though some views of distant neighbours did enliven the walk. 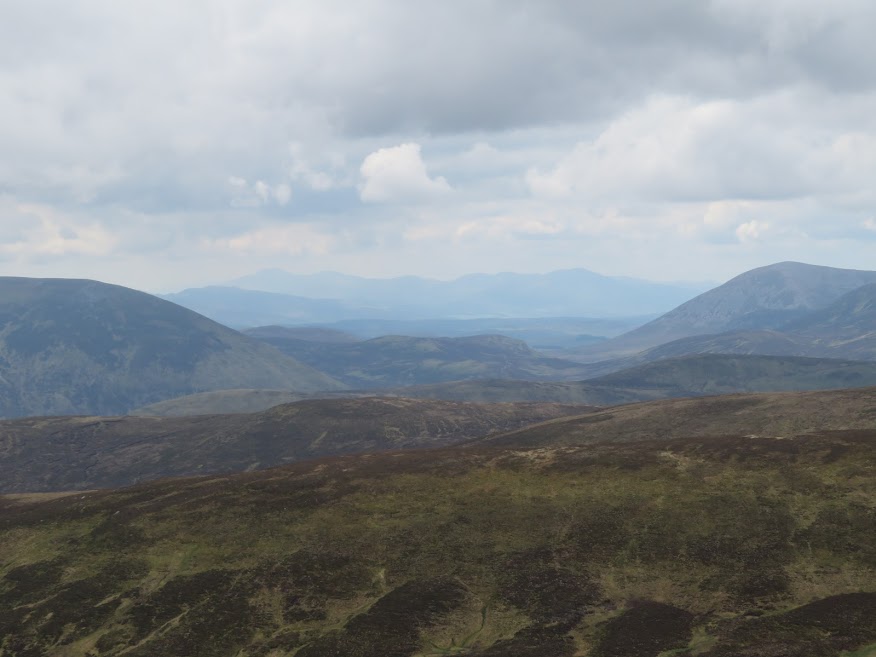 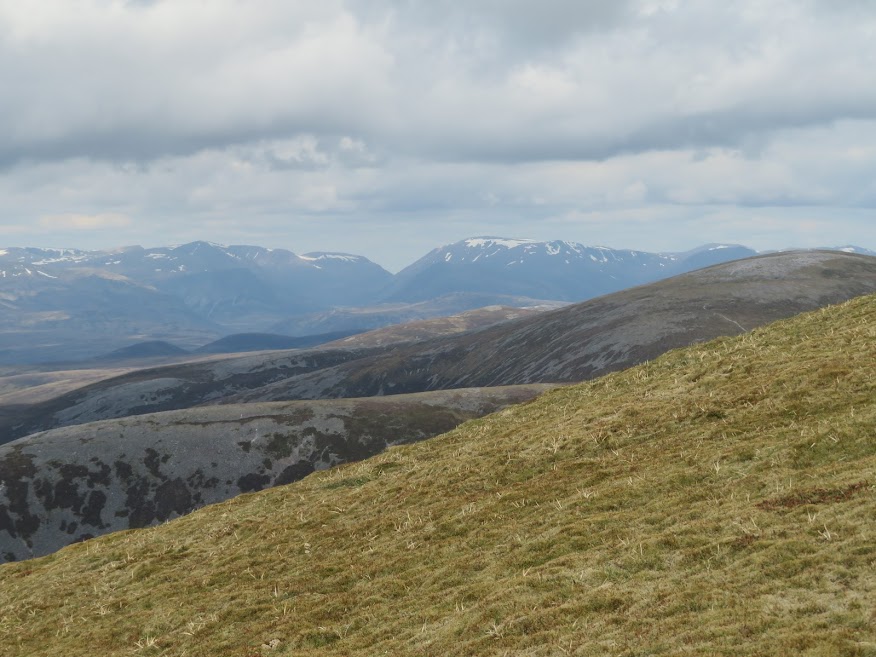 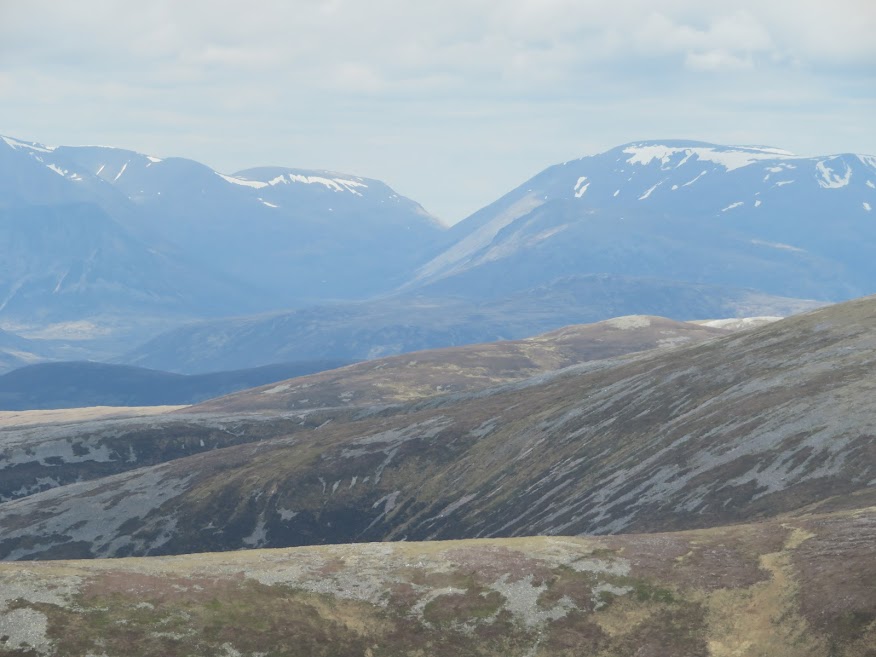 The last little steepening before the summit, after cutting off from the main track at a cairn, initially left me struggling to get going after such an easy ascent up to that point. However, once I'd stopped and started a couple of times I seemed to get a spring back in my step. 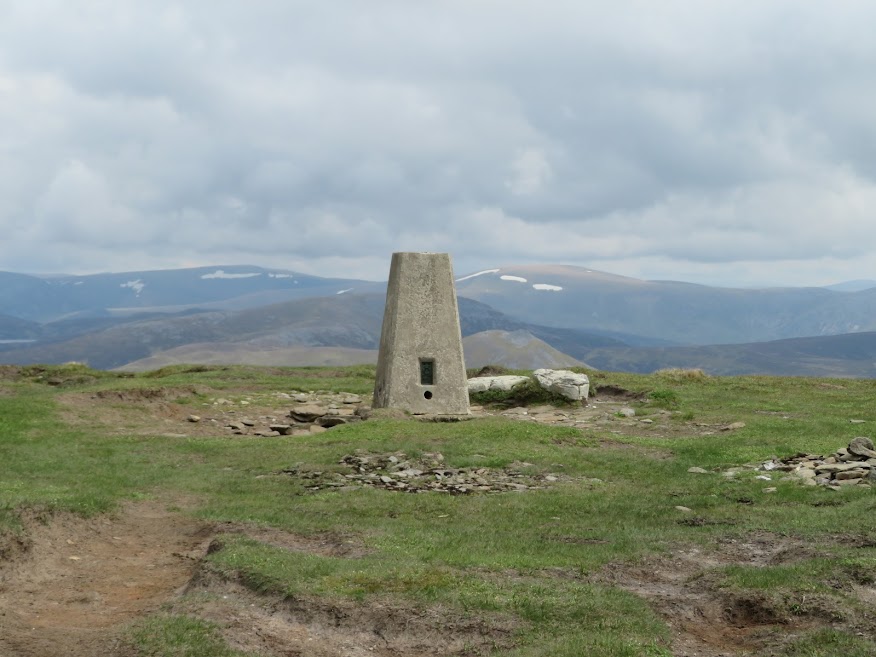 It was good to see the summit cairn. It meant that I could still climb a Munro. However, since climbing Munros isn't something I'm intrinsically interested in, I was actually more satisfied with the ascent climbed and distance covered meaning that I was still fit enough to go hillwalking in a general sense. No particular reason why I shouldn't be but sometimes I worry that I don't do enough exercise to maintain that elusive hill fitness. 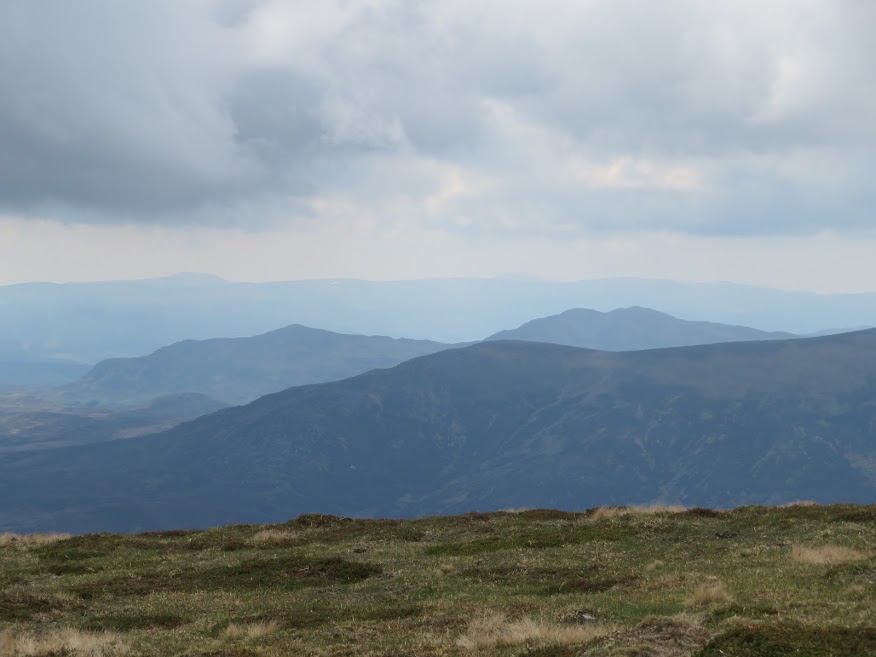 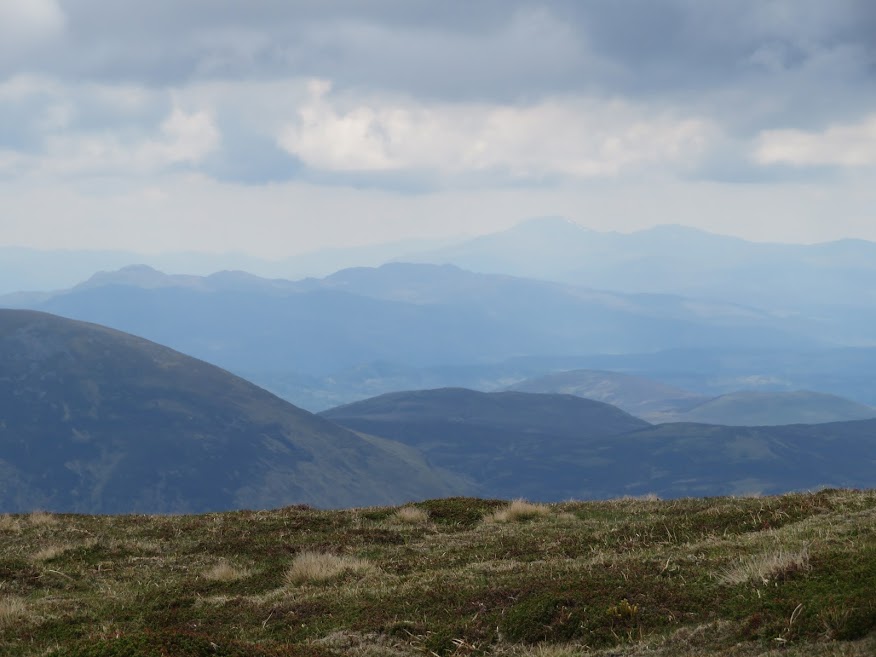 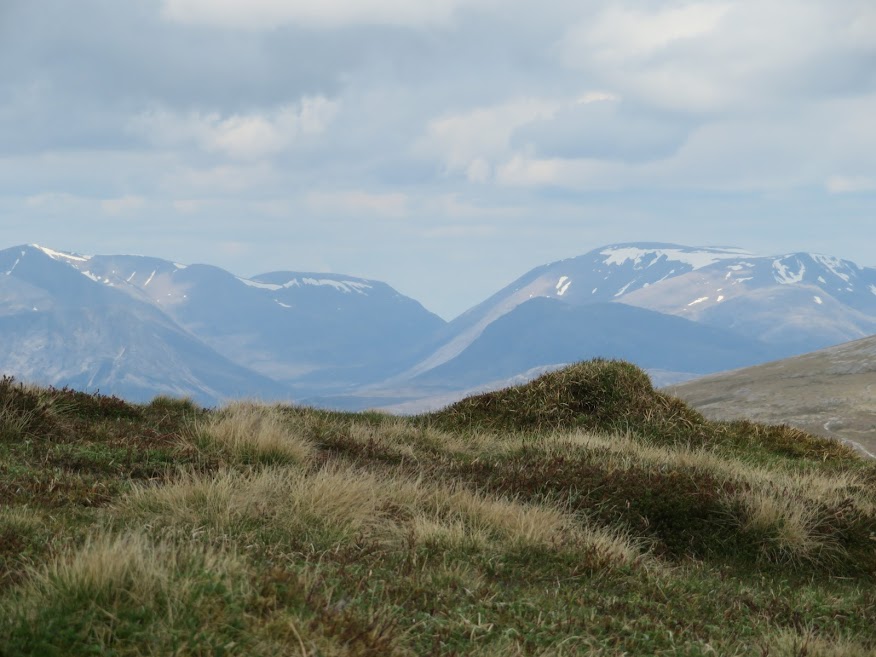 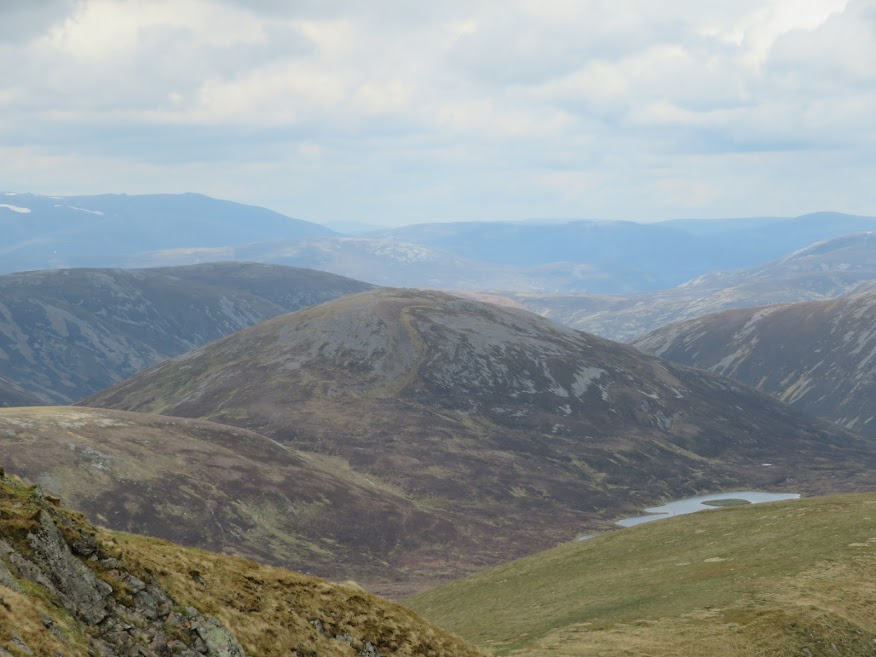 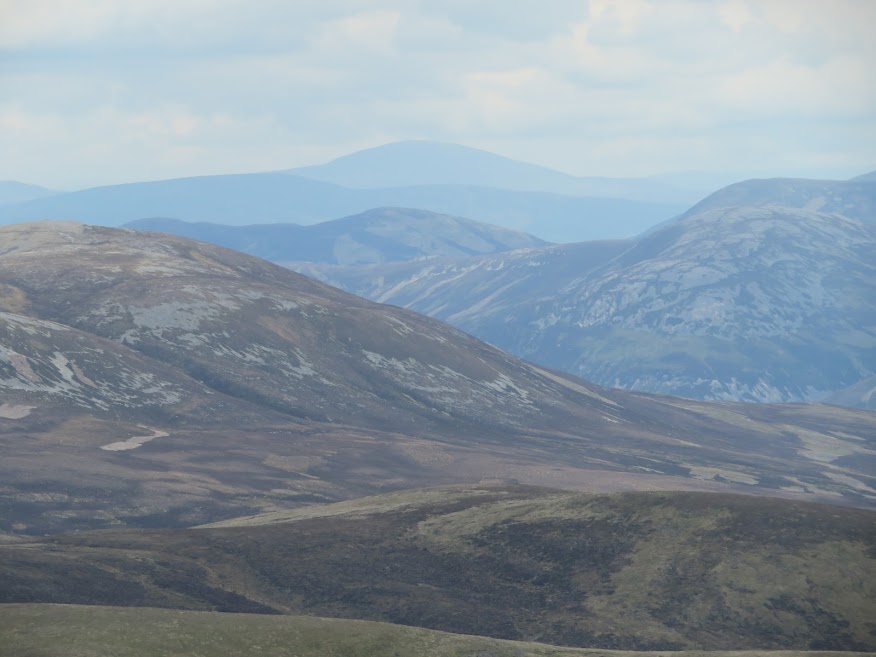 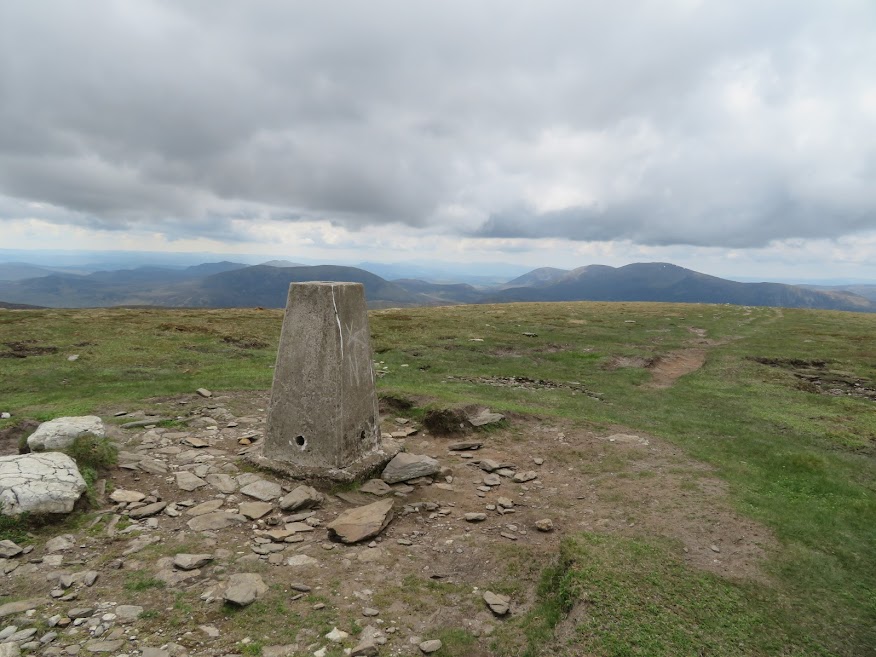 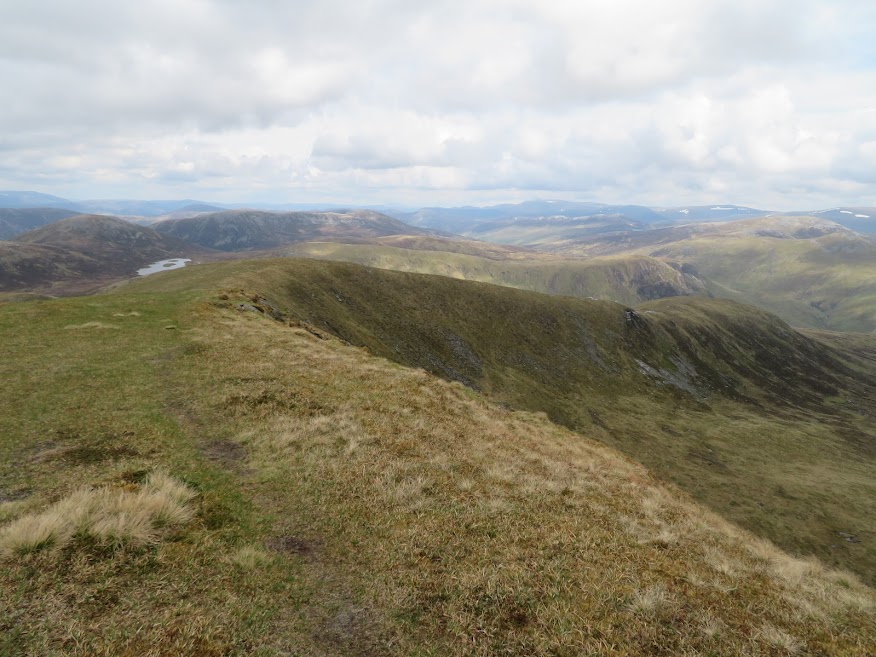 I debated about whether to retrace my fairly dull steps or to make a loop walk. Retracing my steps would have been easiest as I had to get back to the car for about 5pm. However, the ridge ahead looked a far more interesting option. So I opted for the latter, knowing I would have to push myself a little bit to cover the extra distance.
That started off very optimistically with a jog along the summit grass/moss. That lasted about thirty seconds though as my three season boots brought me back to earth. 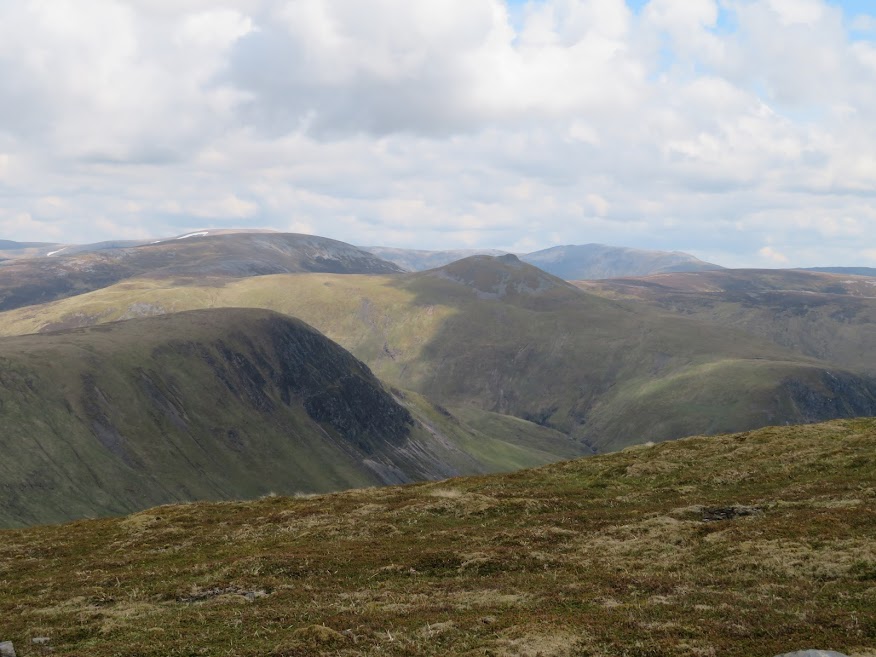 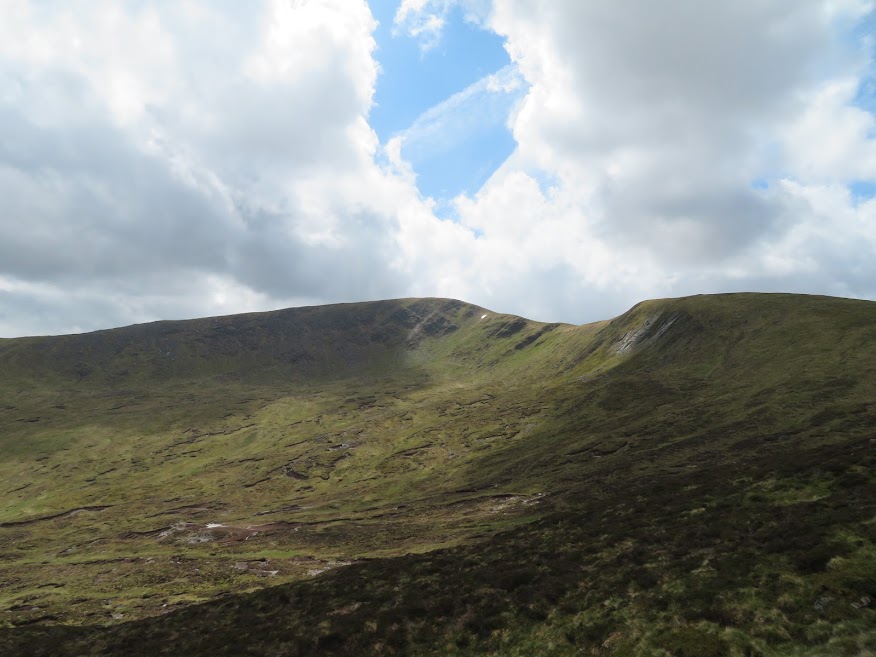 Looking back up the north ridge. 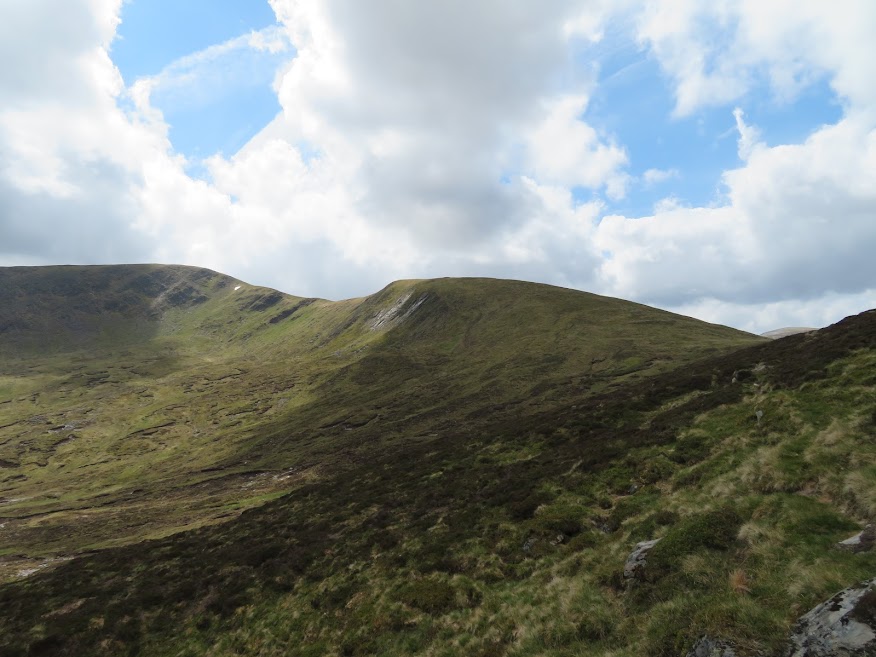 I made a mistake in cutting east before the 858m bump. There was initially a narrow path to follow but that seemed to disappear or else I lost it. That said, the terrain between there and the path I was aiming for was easy. 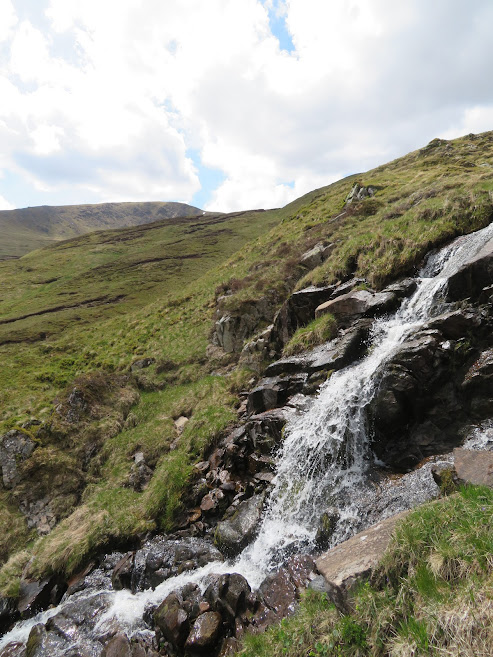 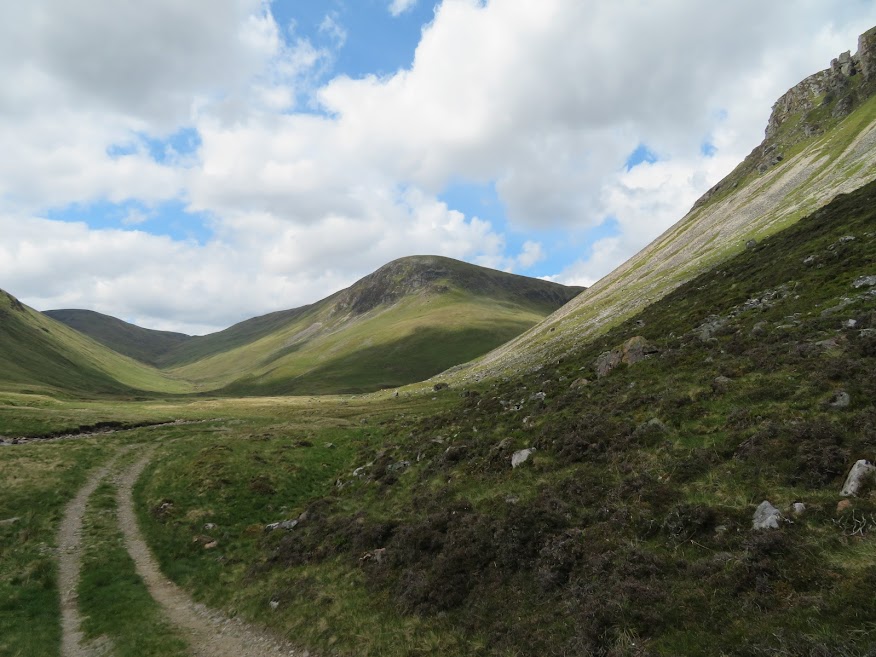 The descent path was surprisingly steep and rocky in places but eventually I reached a landrover track though that still left a couple of easy water crossings to negotiate.
During the descent the cloud had started to break up. 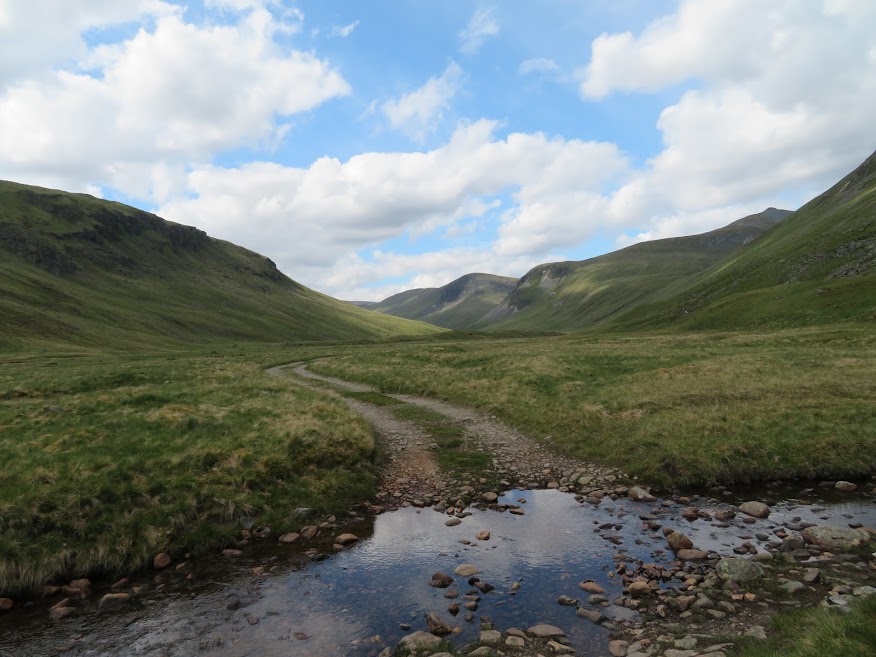 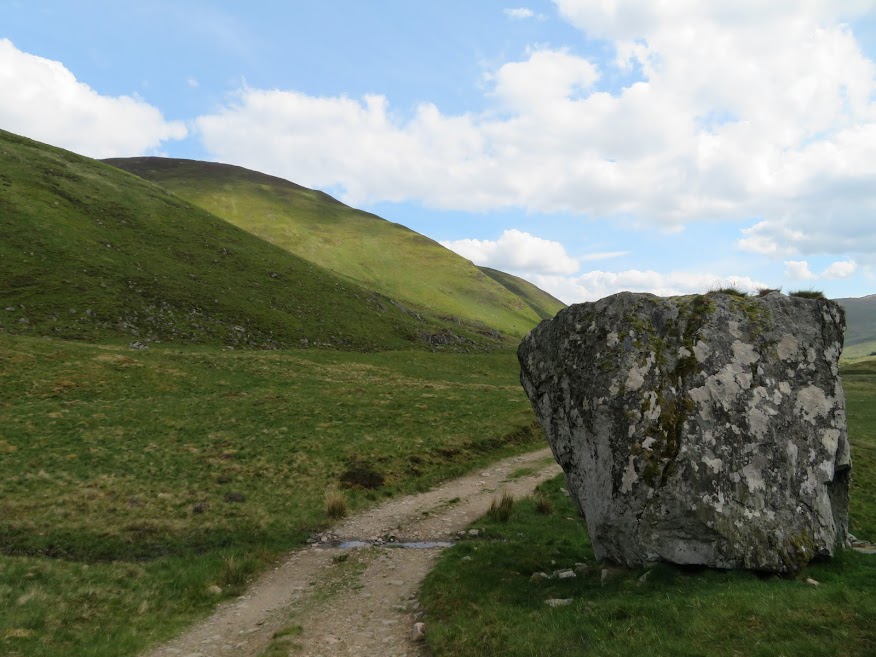 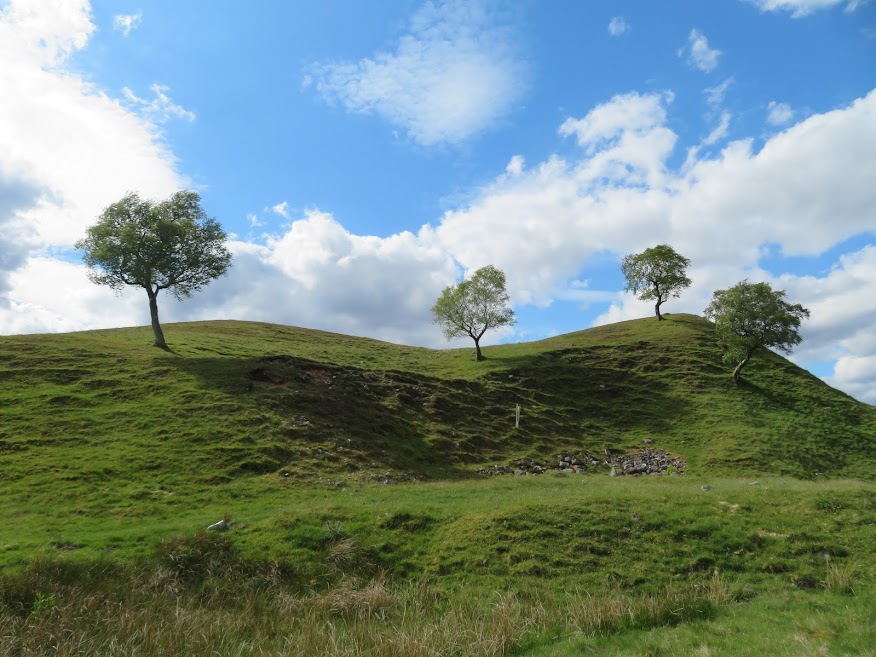 With about 5km to go I was struggling to keep up the "pace" but I made up a 5km song to lift my spirits and mixed that in with my own Shooby Taylor tribute.

the guardians of Talisker Bay and the stallion head

the cow, the crow, the squirrel and the dunking moorhen