I started hillwalking on new years day 2010 with the first one being schiehallion - valentines day that year was spent on what we thought was Ben Lawers. As I have been gradually getting out more it dawned on me that alas we did not get to the top of Ben Lawers - sad times. So to correct this I went back with my daughter but again, unfortunately, no sumit was reached as she complained of sore legs and I didnt want to put her off forever. She had climbed Mount Keen just a couple of weeks before and I wanted to keep her interested.

So after the last few weeks of problems at work and health scares I decided this weekend was it - nothing was going to stop me! I would go myself and take as long as I needed! I aimed to leave my house at 9 and was on the road for quarter past which is an achievement for me - good start! I had my dads old car which only has radio but 2 of my 'get up and go' tunes came on so my spirits were high! All was well till just before the turn off on the a9 for Kenmore where I ran in to a little traffic - I stopped behind the car in front and the van behind stopped IN my back seat - hence the reference to little bump in the title. Still, thinking positively it could have been worse, the back door wasn't opening but my stuff was on the back seat and I could still drive so after many apologies from mr van man I took his details and carried on (albeit a little shaky but these things happen). A couple of miles down the road and I noticed the light coming on telling me I had a door open - turns out the back door COULD open - it just couldn't shut, damn.

Anyway I get to rather packed visitors car park later than had hoped so quickly park and put the ticket on the car (I did notice quite a few had chosen not to pay the voluntary fee...... it's only £2). Off I went at quite a steady pace but soon had to slow down due to stomach pains. Echos of my partner telling me I shouldn't be going rang through my head but that just spurred me on

I noticed an older woman ahead of me walking alone also and wondered if I would still enjoy this in about 20 years but then I thought why on earth would I not?

I impressed myself when I passed quite a few groups - I'm really not fast at walking at all and like to stop to take in the views. I briefly slowed down behind one couple and overheard the woman saying she was looking forward to the alcohol later much to the amusement of her husband! Ha ha Not bad weather starting off 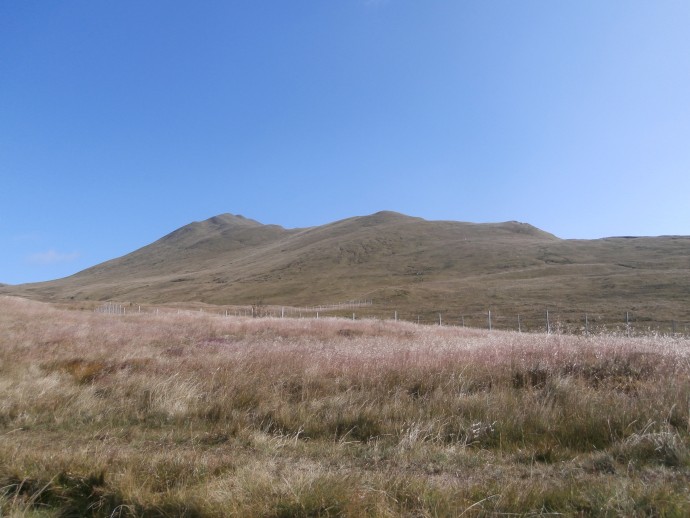 Not before long I was on the short plateau before the sumit of Beinn Ghlas and I decided to stop for a breather and to check my map. My dad has been cutting out all the articles about walkers relying on mobiles and gps devices whilst out and giving them to me so to stop some of this nagging I decided on such a clear day it would be good to brush up on my map reading skills. As I was doing this I overheard someone saying 'that's not a sight you often see - a woman reading a map' - happy dad? Rather nervous posting this one as I'm wearing pink...... :)

Up to the sumit and my fear of what I believed we had walked back in 2010 was made in to reality - we had not walked up Ben Lawers but Beinn Ghlas. It was a very different view now though - for a start there was no snow! There was, however a view so a few photos and off I went along the path carrying on to Ben Lawers. I did find the climb quite steep, I wouldn't call any Munro 'easy' I don't think. I was glad of my poles keeping me steady

Literally 5 minutes before the sumit I saw the clouds coming in so I tried as hard as I could to get there before the view went but unfortunately I JUST missed it - gutted. Yes it did go through my head had I not met mr van man I would have been there earlier but no point thinking 'what if'. I sheltered behind the trig point with my sandwich and took a few photos of, well, nothing

A few more walkers came up - some young lads with their parents and 3 or 4 dogs - very nice family, and another couple I had passed. I moved round the side so others could get the obligatory 'sumit photo' and finished my sandwich. I had considered carrying on to An Stuc but I couldn't see it so thought it best to call it a day. Looking out to Ben Lawers The top - and the cloud Could still see in front of me though

I set off back down the way I had come up and I don't know if everyone feels like this but for some reason I always end up running back down! I just can't seem to walk down! Don't get me wrong the minute it goes back up hill again I'm back to walking but along sumits, ridges and going down I always get this urge to run. Luckily I don't get the urge to fly though!!

I had intended to just go back the way I had come up but as I started back up Beinn Ghlas I suddenly thought if I wanted to go back up I would have been as well carrying on to An Stuc! So I crossed down to the easy path below and saw those I had passed earlier. They must have thought 'why on earth has she ran over there to walk down here?' - ah well. All the way down I kept looking back to see if the cloud lifted but it didn't - even back at the car I couldn't see the sumit - good decision to turn back for me I think!


Best way to spend your 30th