An Teallach, words don't do it justice. 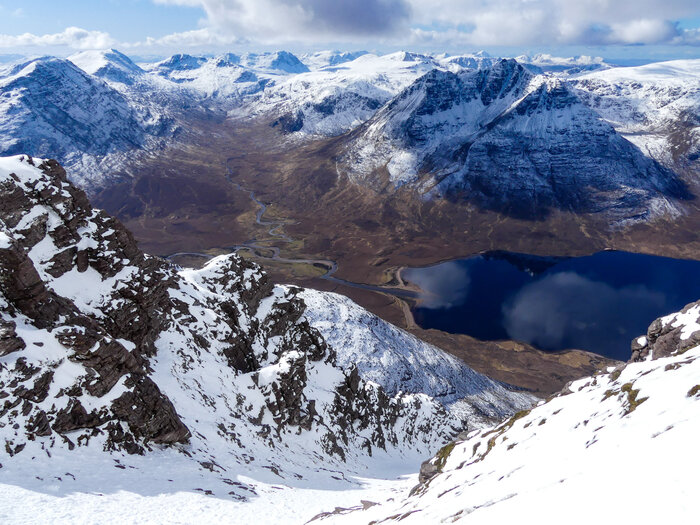 As with most other hill-walkers, An Teallach has been on the proverbial "bucket list" for many a year. So suddenly, the chance appeared, the weather looked good and Covid restrictions permitted.
I arrived at Corrie Hallie layby on the A832 and set off at 0600hrs. Sunrise was at 0619 and I wanted to walk the route in a clockwise circuit with the rising sun to my back. I set off at a fairly brisk pace and the ground underfoot was good along the track. At Coire Chaorachain the snow on the ground became ankle to shin deep and slowed me down a little but upon reaching the cairn where the track forks,I rested momentarily and the view of the snowy landscape ahead was wonderful.
I veered right and plodded up directly to the sloping plateau of Sail Liath. It was now that I put my crampons on as the snow had an icy crust on it.
There were tracks in the snow, although not fresh and I wondered on the wisdom of following them, always wary of following someone who might not be correct. In this instance though it was quite apparent that we would have been on the same wavelength.
On past Stob Cadha Gobhlach and up to Corrag Bhuidhe, the views were spectacular in all directions and I stopped more than I intended just to soak up the views. That's my excuse and I'm sticking to it.
The challenge of Sgurr Fiona lay ahead and I must confess that I approached it with mild apprehension at first. However as I negotiated the the twists and turns of the outcrops I was emboldened by the crampons and ice axe. Steady as she goes, every footfall carefully anticipated.
The track of my "ghostly" scouts diverted into two routes, one directly up toward the peak, the other circumnavigating it. I chose the latter as I know my limitations. That said , this "safer" route had its challenges and after weighing up my options, I ventured up a snow gully using the ice axe and digging in heavily with the crampons. The sun had been out most of the time and was slowly melting some of the snow. I became intensely aware of avalanche risk and didn't loiter around on this stretch. Lord Berkeley's seat was not even an option.
Sgurr Fiona completed and the marvelous panorama was something to behold. The Fisherfield range was amazing. A beautiful silence and as far as I could tell there was not another soul on the hill today. After some food and drink I continued on down the slope, constantly looking up to Bidein a Ghlas Thuill.
Again I was mesmerised by the views and the spectacular drop down to Loch Toll an Lochain. Upon this summit I looked out north to the Summer Isles. The trig point was frozen on the north side indicating the normally harsh prevailing wind, but today I was fortunate as the wind was calm.
My intention had been to venture down the north side of Glas Mheall Mor but I was tiring now and recalculated a route down GlasTholl that would take me out onto the main road a little bit nearer my car.
And so, I packed everything into my rucksack, no loose ends hanging off, cleared my crampons of balled snow and took the ice axe in hand. This descent looked daunting and as I gingerly proceeded down I realised that this area had been in total shade and was rather icy. The inevitable happened and one misplaced step, perhaps aided by fatigue, caused me to slip. It was so sudden that I could not self belay in time. After sliding down about 10 metres I managed to arrest myself with the ice axe. I had kept my feet off the ground for fear of the crampons catching and doing injury and luckily I had avoided some of the larger rocks.
This was one of these moments when on the mountain that you fear that you will come to grief and I had a good long wait until I composed myself.
The ensuing descent was cautious to say the least and when I got below the snow line and removed the crampons, the swampy marshland for once was a welcome relief.
Staying to the left of the river, Allt a Ghlas Thuill, I squelched onwards to the waterfall at Garbh Allt. A path of some description appears here but it took me a few goes to navigate through the woodland and shrubs to finally reach the road. A ten minute walk and I was back at the car.
In conclusion, I would not have missed this day for the world. I had some minor cuts and bruising to my left arm, had ripped my rucksack and lost my sunglasses (blue sungods if anyone finds them) This was a very personal achievement on a day which had the difficulties of a winter climb but with the benefit of more daylight hours.
Click to mark this as a great report. Register or Login free to be able to rate and comment on reports (as well as access 1:25000 mapping).