Finally my week in Glasgow was over. I hoped if I took a half-day at work I would manage to fit a walk in on the way home. In the end I decided to be quite ambitious and go back to Inverness on the A82. While it takes at least an hour longer it is only a few miles further and has even more walking opportunities than the A9. Ben Challum has a Munro top that the majority of people with even a low double digit count of Munros under their belt have probably been over, as the most common route to the main summit crosses it. I have only been up Ben Challum once before and I had cycled up Glen Lochay, completely missing this top. This was a perfect chance to rectify that, and do a nice circuit of Gleann a' Chlachain if time and weather permitted.


our_route.gpx Open full screen  NB: Walkhighlands is not responsible for the accuracy of gpx files in users posts
If weather permitted...Passing through Dumbarton the rain was so heavy I could barely see where I was driving. It cleared nicely up the side of Loch Lomond but another shower hit in Glen Falloch. There was virtually no wind so the showers were not moving on very rapidly - it looked like it would be completely down to luck whether I had a nice sunny walk or got drenched for the duration! Parking in a layby on the A82, I started walking at 2:30pm on the dot. Slow traffic and someone phoning me just before I was about to leave made this about an hour later than I had wanted, but no matter. 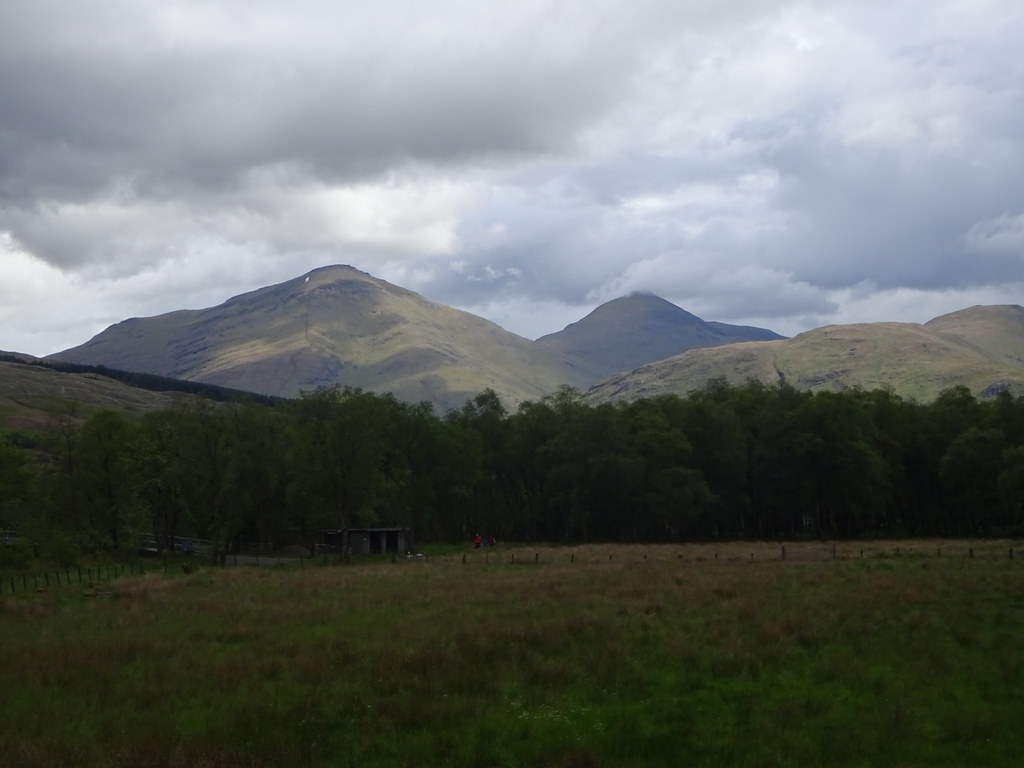 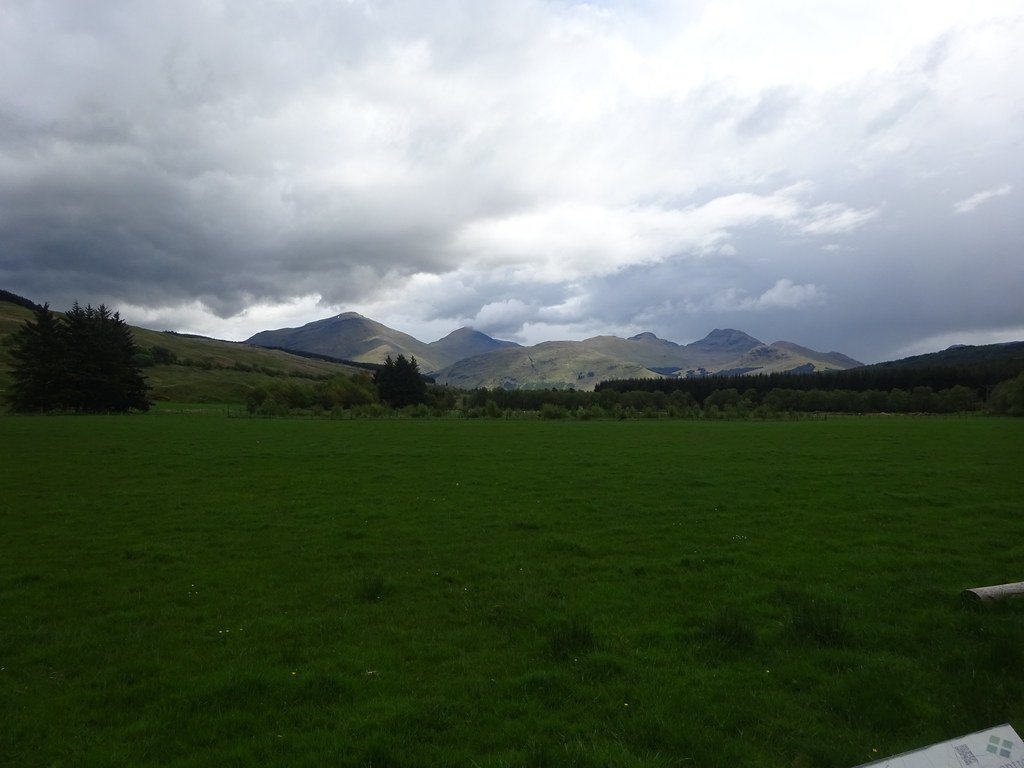 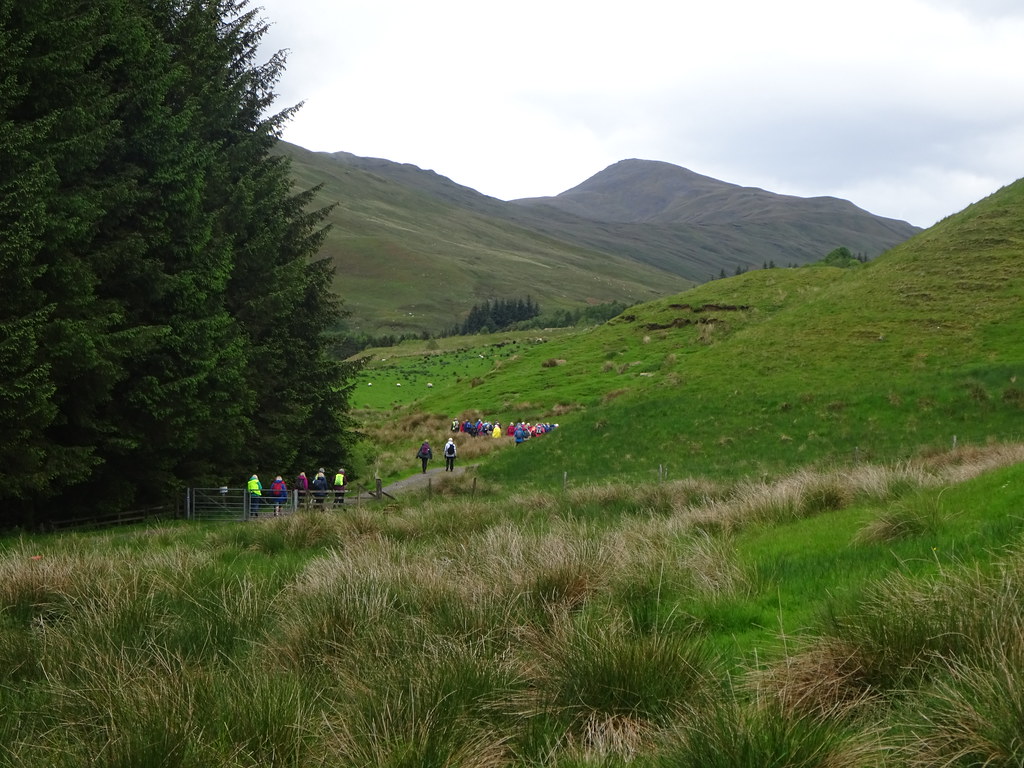 Busy on the WHW (this was a single group I think) 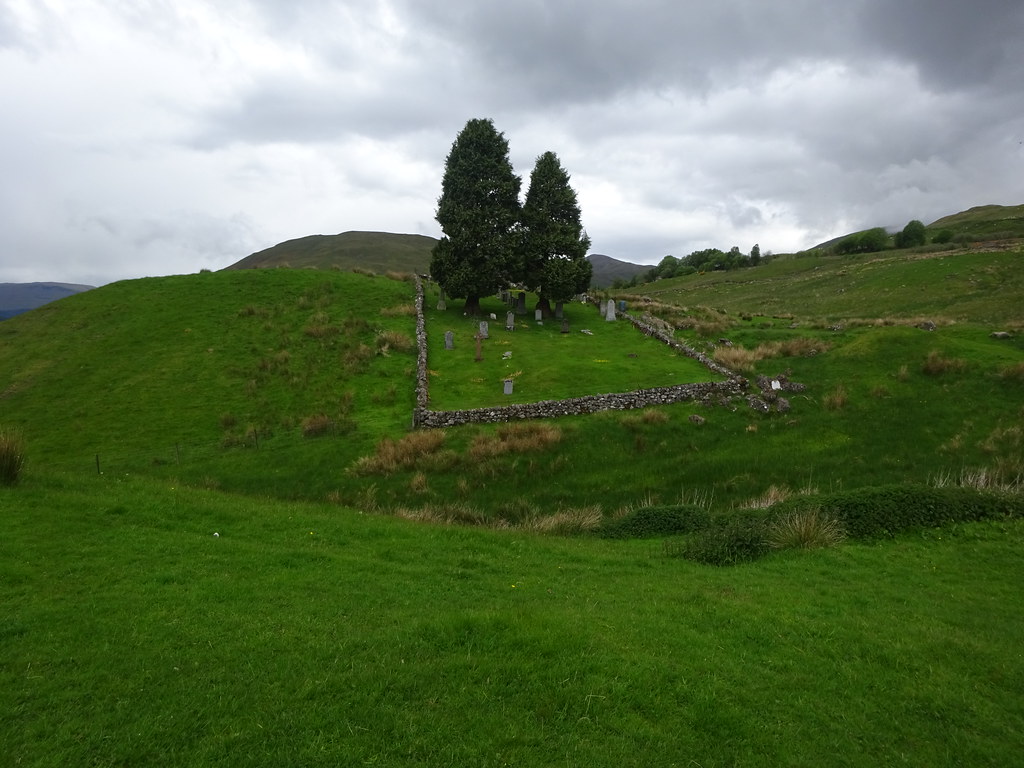 While it wasn't actually raining at this point it certainly looked threatening as I passed the SRUC campus and started climbing the hill past the Kirkton graveyard. I left the main track to cross a bridge over the railway but discovered I could also have stayed on the track and used a level crossing. No odds really - it was onto slightly wetter (although easy going) ground now. I passed a few people on their way down, and at around 40 minutes in the rain started. 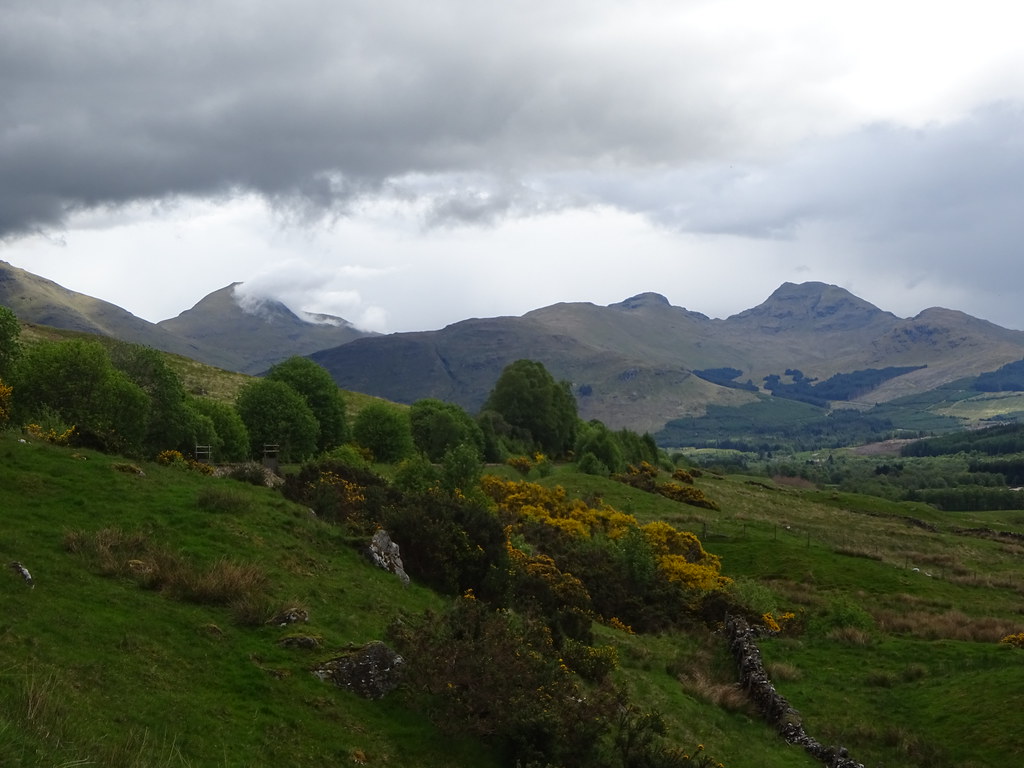 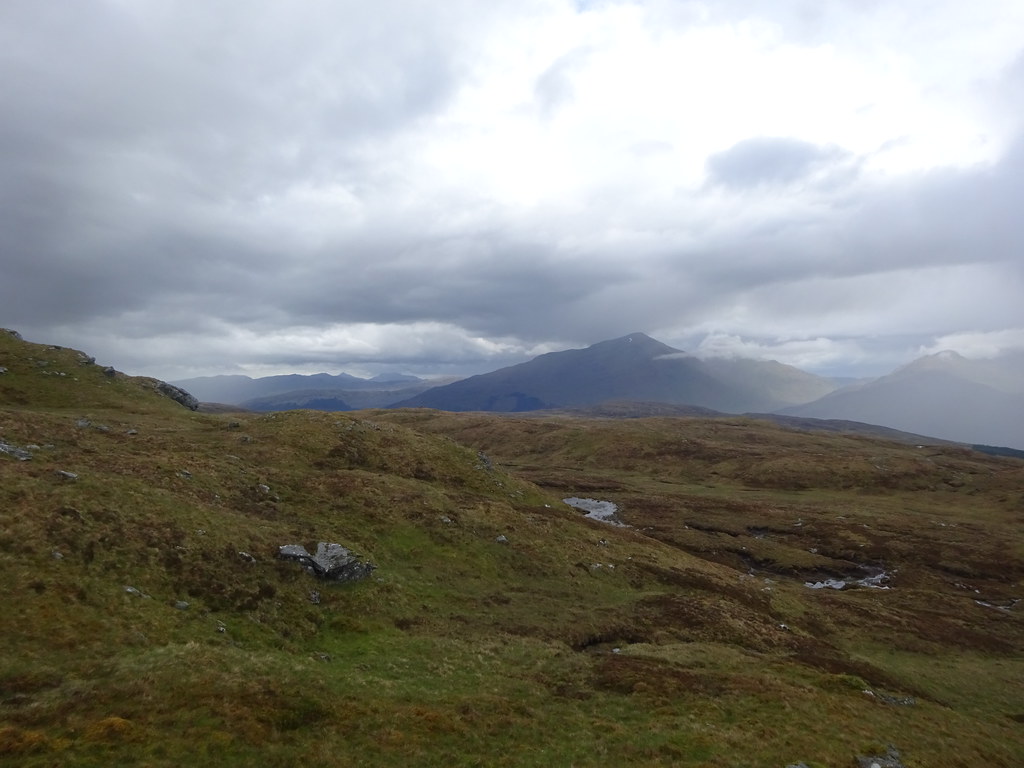 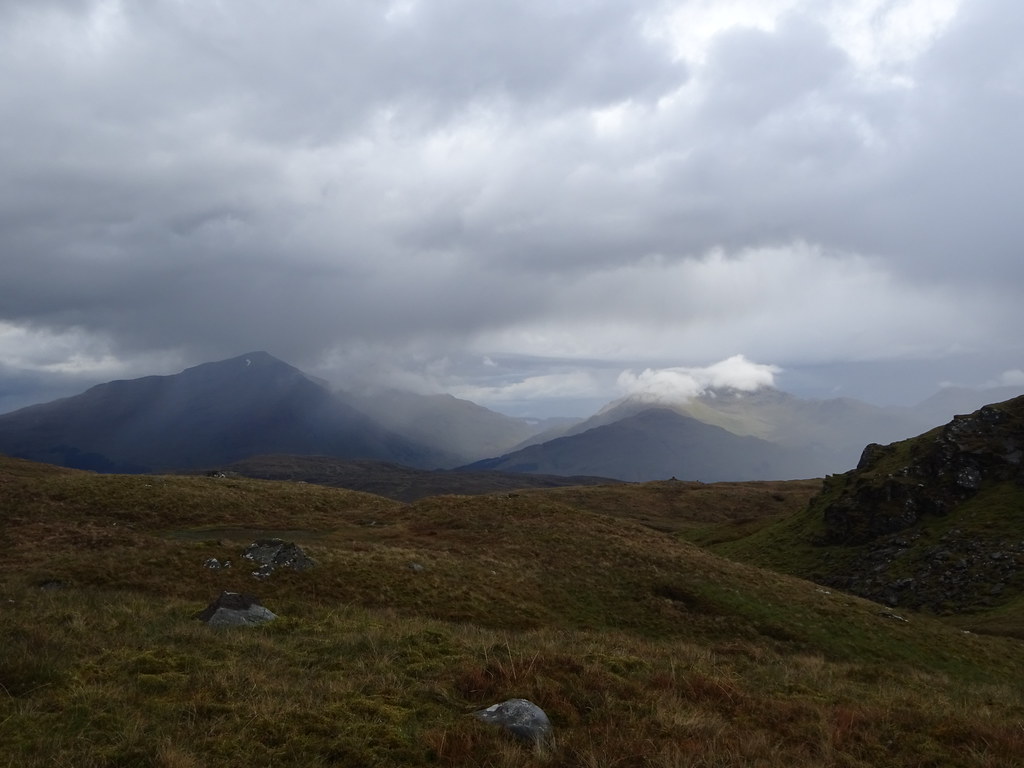 Ben More and Cruach Ardrain emerging from the cloud

While it wasn't that warm, the air was still muggy so I wasn't too pleased to have to put on my waterproof. In the end the rain wasn't that heavy and by the time I had passed over the rather flattish wet plateau next to Creag Loisgte and climbed the steeper pyramid of the South Top, it had pretty much stopped. It is quite a pleasant ridge between here and the main summit and the views were gradually coming back. On the northern end of the South Top is a strange double ridge formed by some sort of landslip or fault that could easily confuse in bad weather. 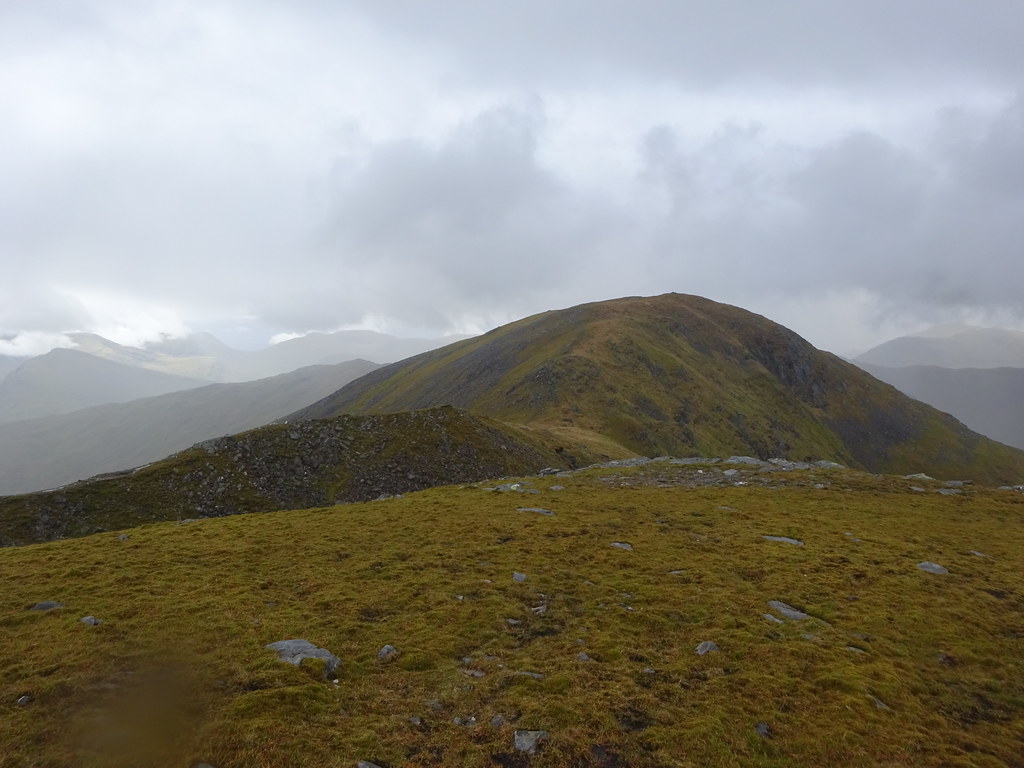 Ben Challum from the south summit 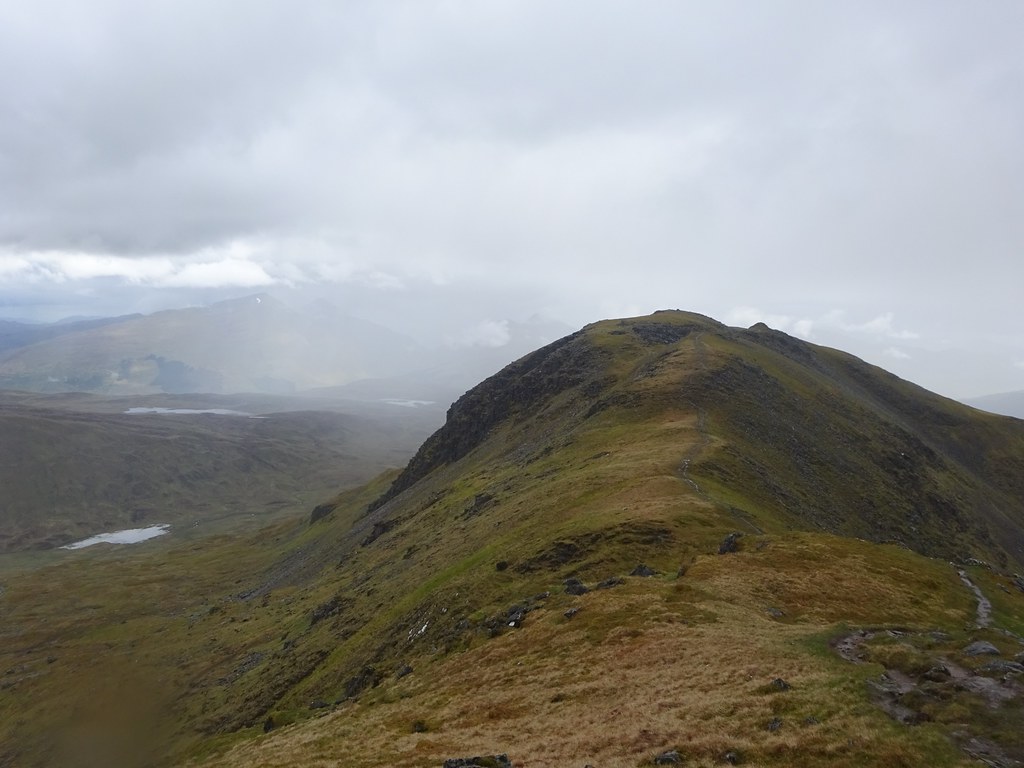 Looking back to the S summit

I was quite pleased to have views of some sort from the main summit and almost no wind. I decided to carry on with my intended route rather than go back the way I had come - there were still places I could shorten it if the weather worsened again. 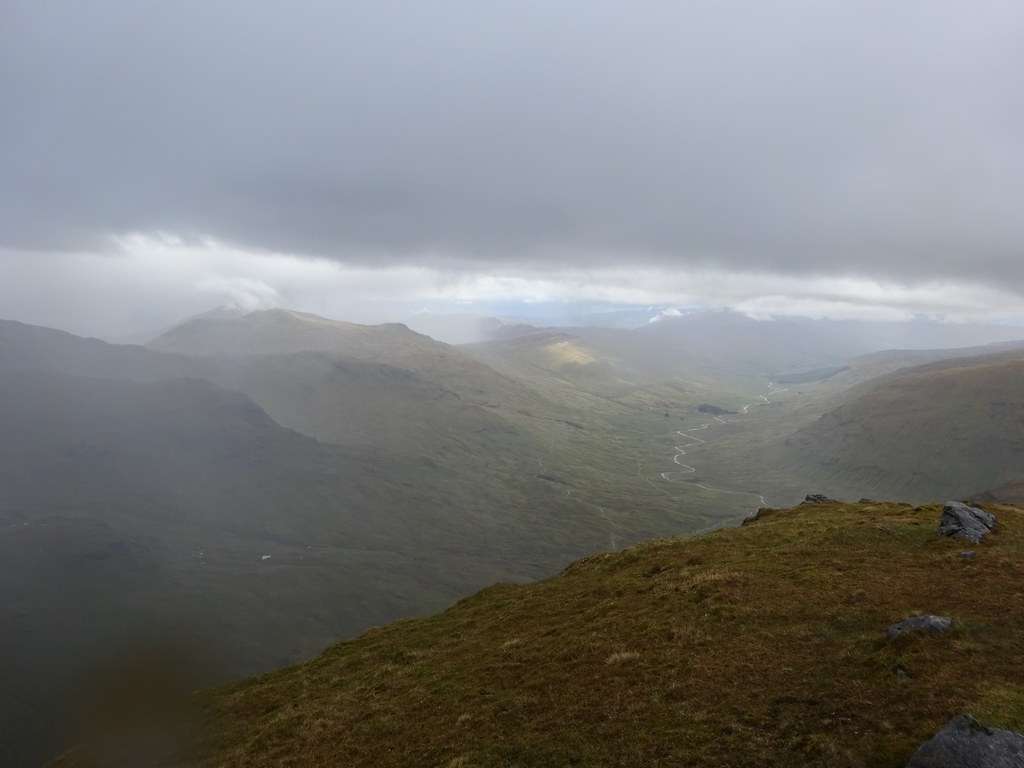 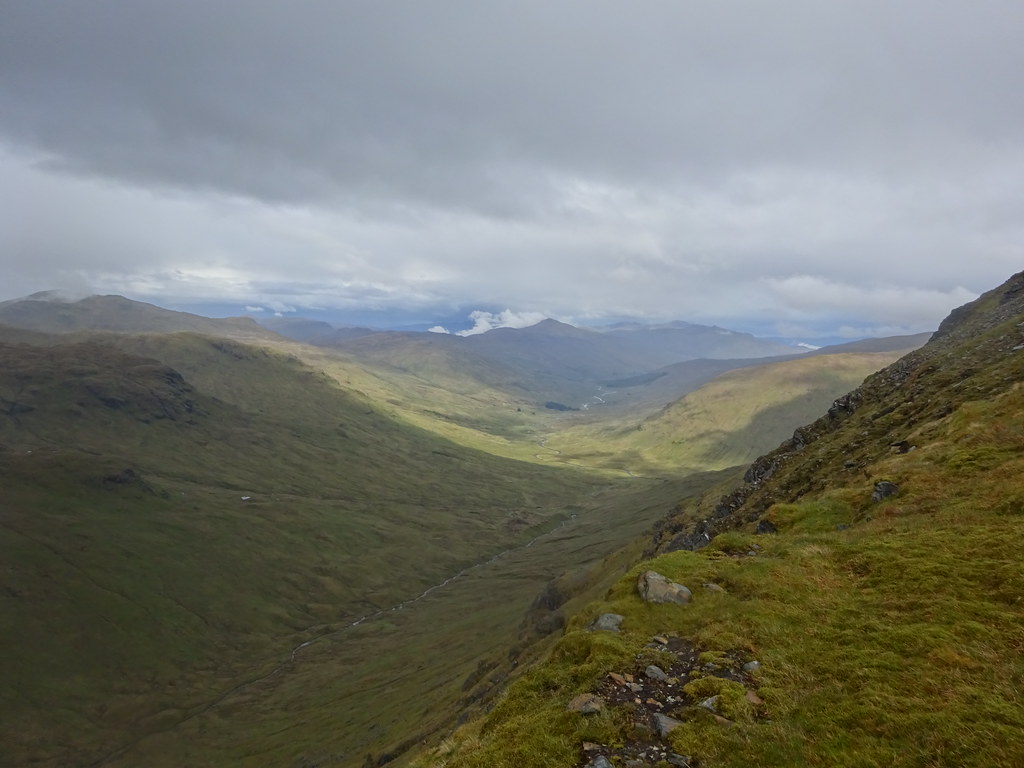 The north ridge is quite steep and there are some slabs to scramble over about 2/3 of the way down - combined with a lovely remote setting this made for one of the more atmospheric spots in these hills. I think you could probably outflank the slabs by going a long way west but I doubt it would have been much easier. As I reached the bealach, the sun came out. Lovely

. While I thought this route was a great discovery, a later look back at my notes revealed I had actually come down (or possibly up - I didn't specify) this ridge on my 2004 walk from Glen Lochay. I don't have any recollection of it at all! 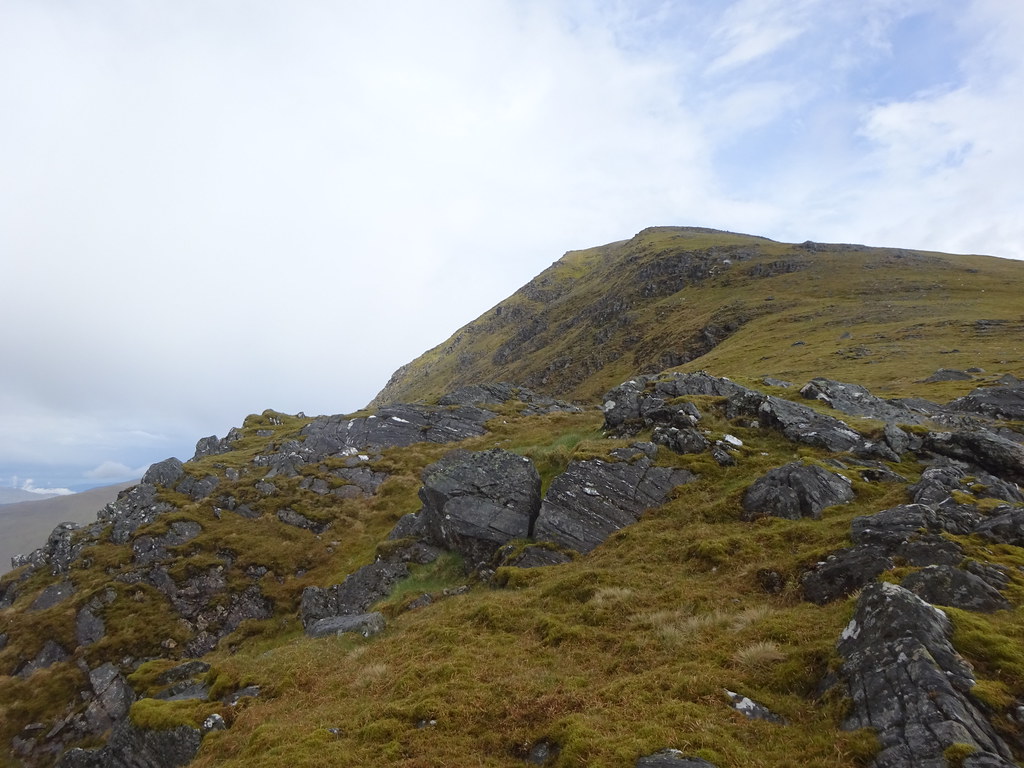 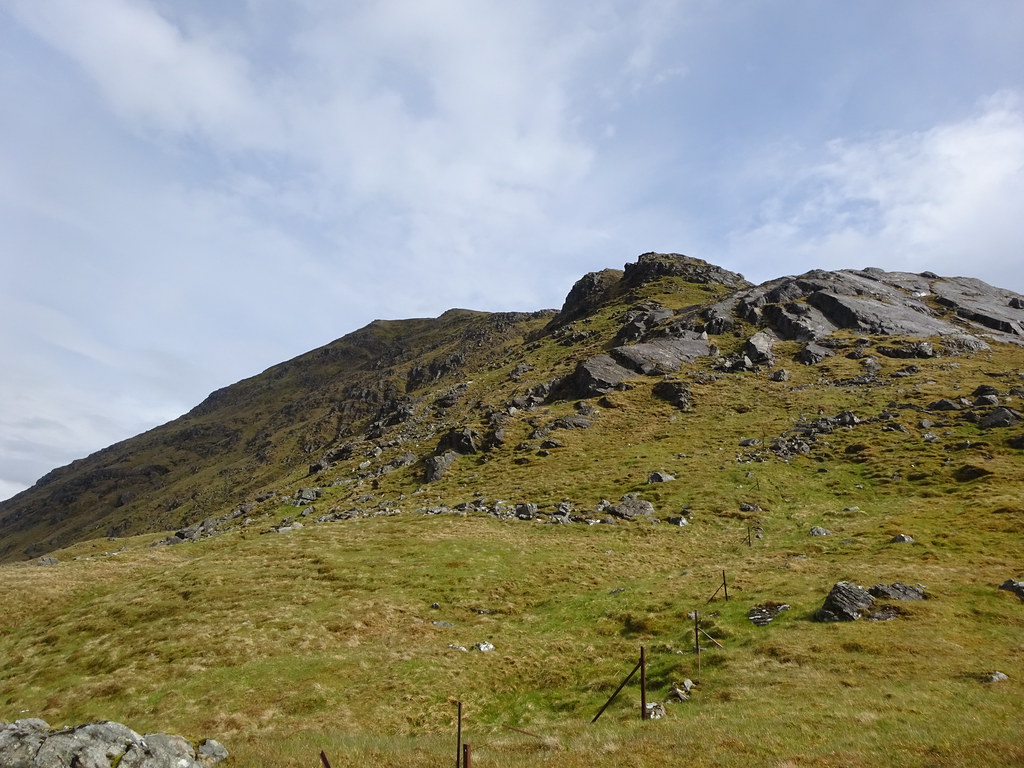 Slabs on the N ridge of Ben Challum 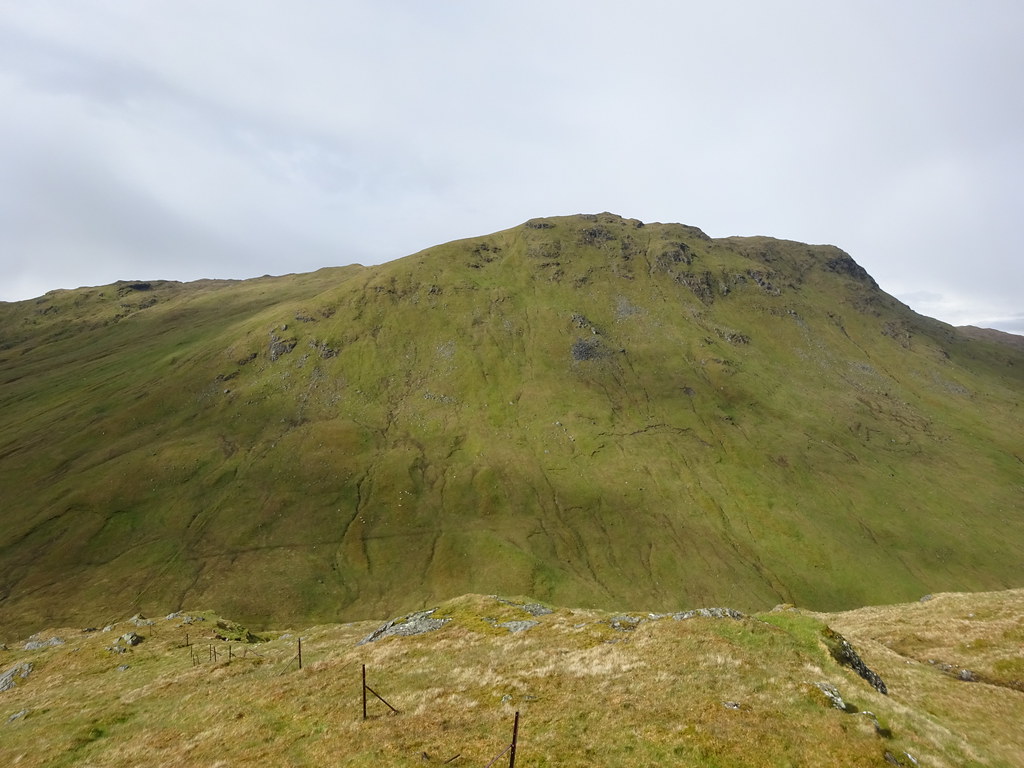 With the sun out, continuation to Cam Chreag seemed like a no-brainer. While steep initially, this was less rocky than the N ridge of Ben Challum and I avoided the direct route onto the SE end of the summit ridge by taking a rising traverse to the west. I missed out some ridge by doing this but it probably got me to the summit slightly faster. While I had decided to do the whole circuit of the glen, I still wanted to make reasonable time to avoid arriving back in Inverness at midnight. 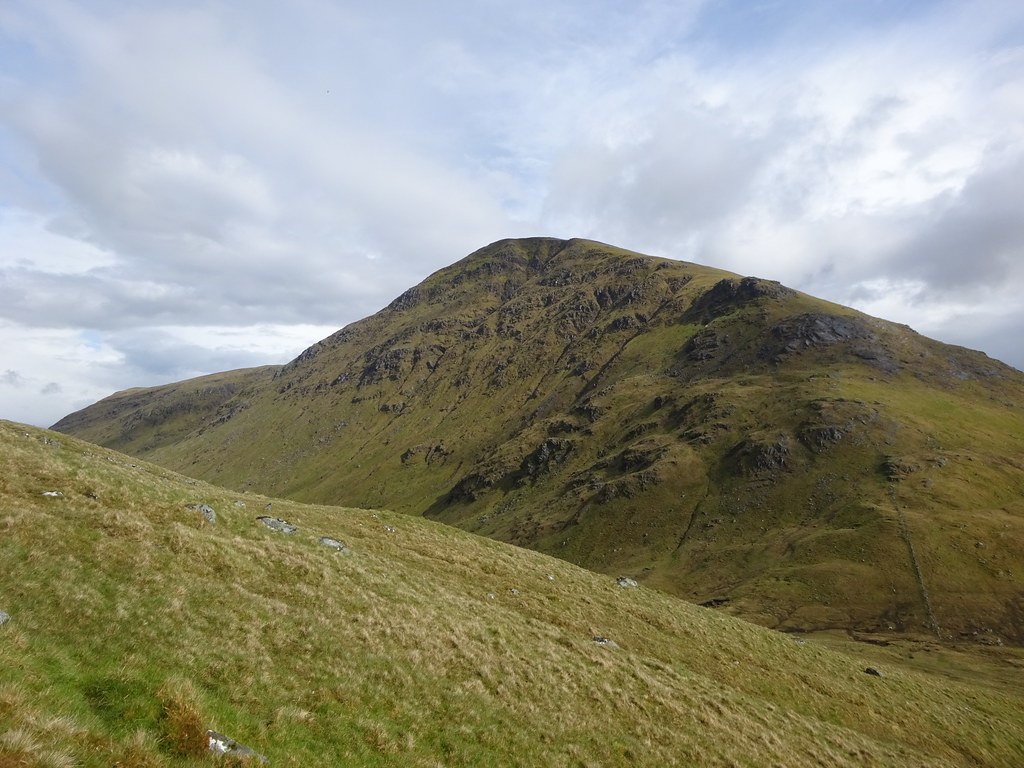 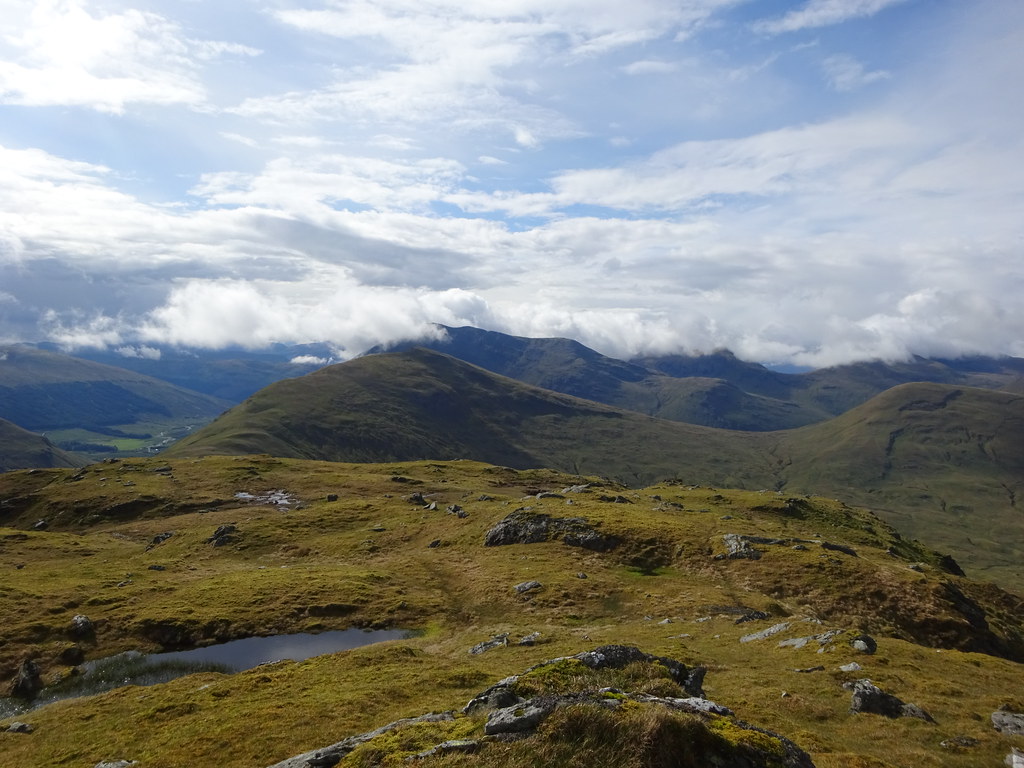 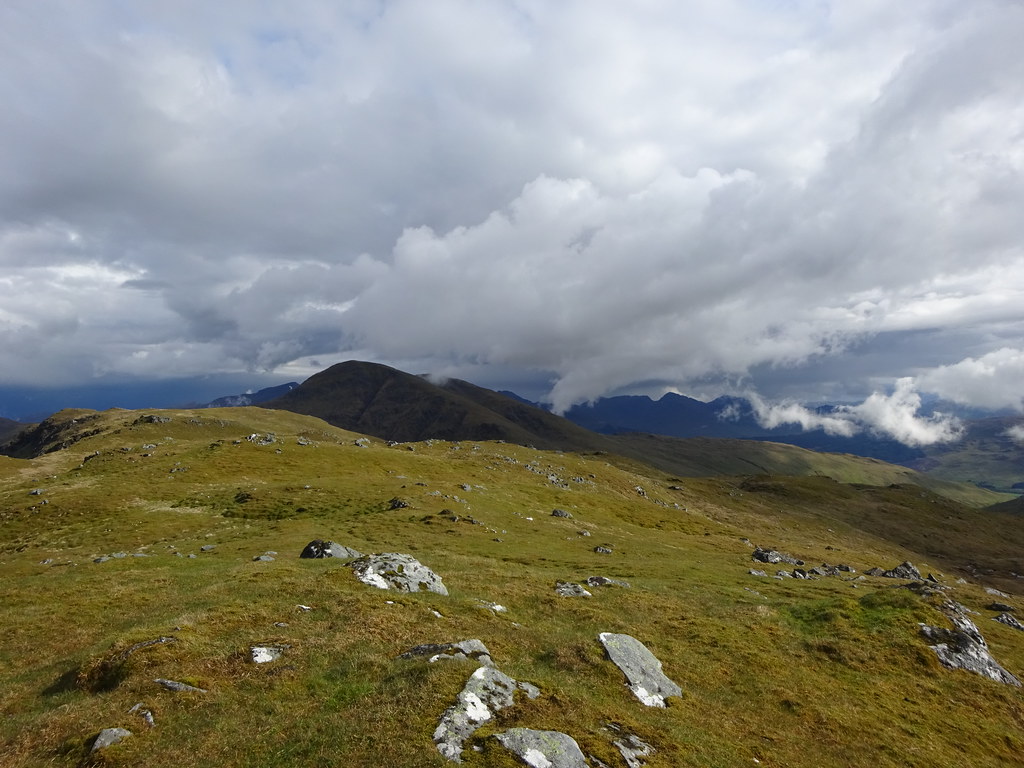 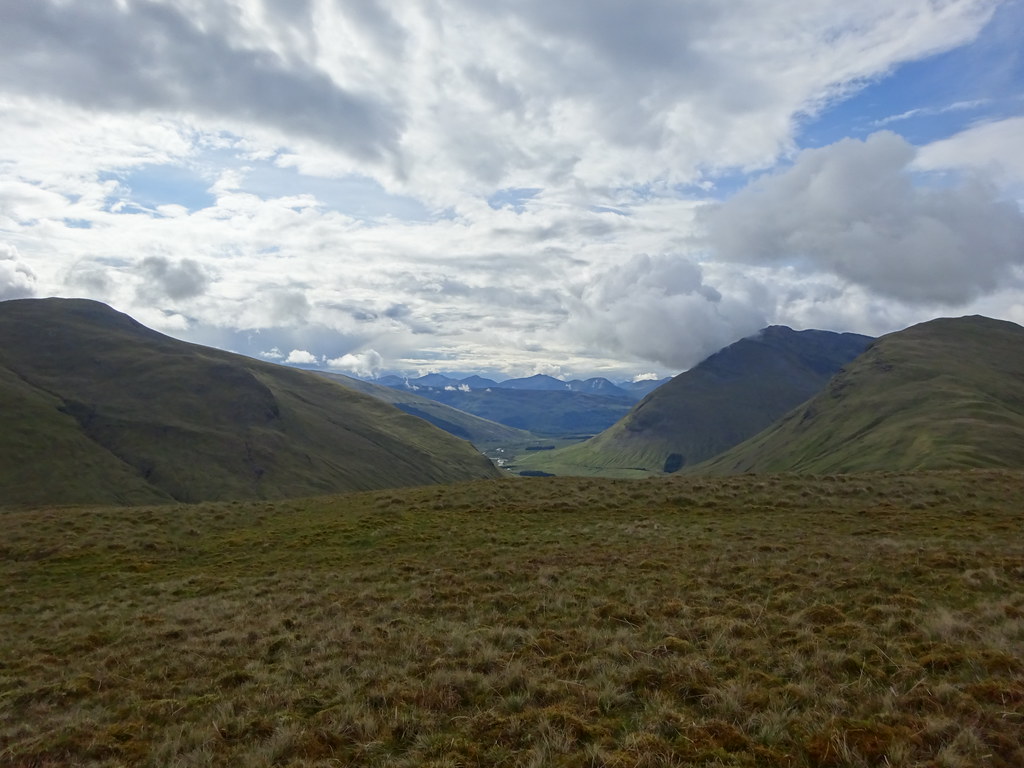 Cam Chreag is a nice lumpy summit and it feels quite remote. There were views to new places - the end of Loch Lyon and the back of the Etive hills. As I remembered from a previous visit to these Corbetts, the route from Cam Chreag to Beinn Chaorach is probably the most straightforward link-up between any of the 5 Corbetts. Also, missing out Beinn Chaorach barely seemed to save any time (maybe 15 minutes at most) so I decided I would go over it as well. Why not? 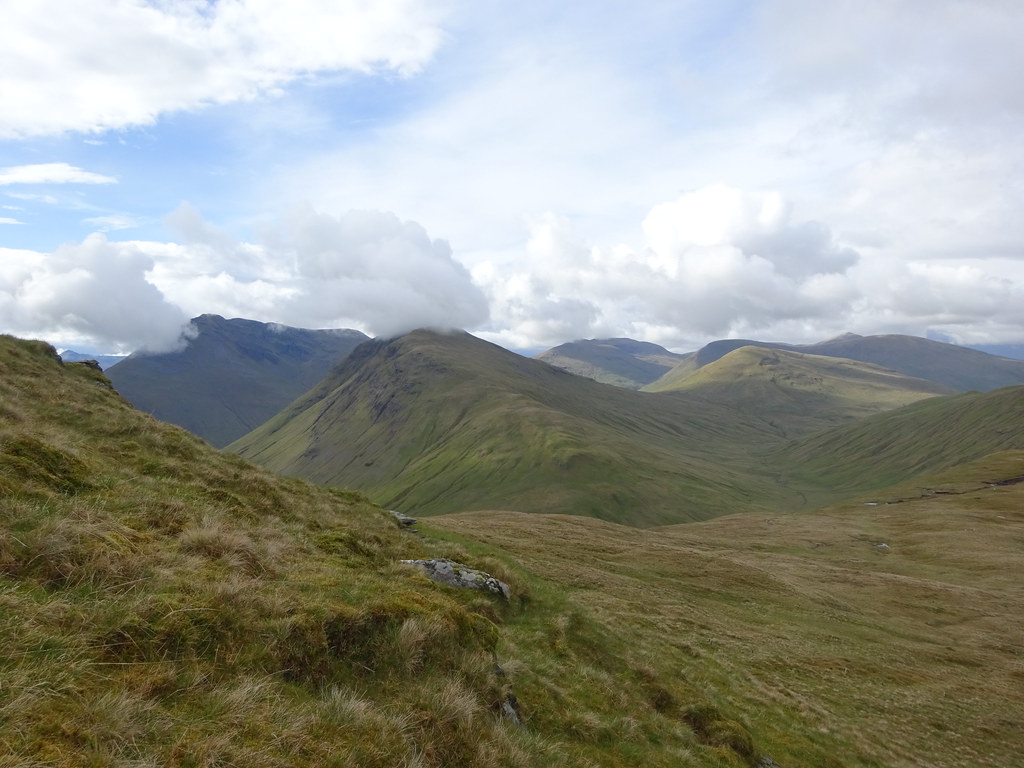 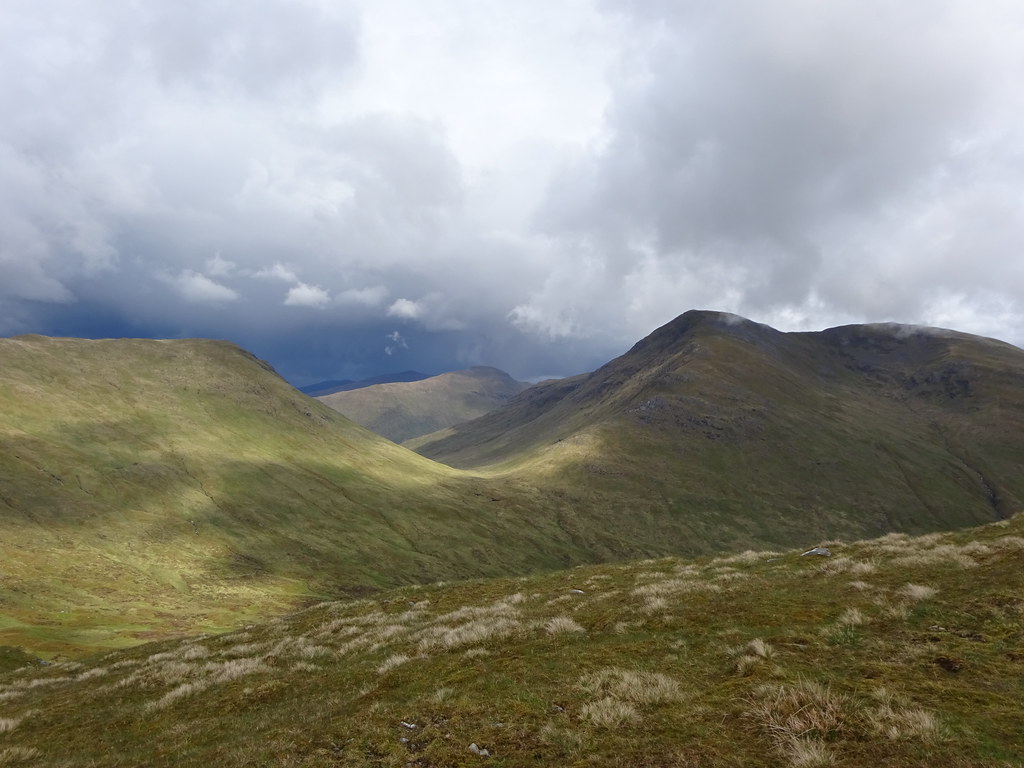 There is a funny electric fence on this ridge (or there was - I doubt it has worked in 20 years). It is a double line of posts about a foot tall and has a single strand of wire on each line of posts. The remains of a generator or battery pack remain near the low point of the ridge. Hard to think what kind of animal management was being attempted here but it can't have been a particularly successful experiment as I haven't seen anything like it elsewhere. Beinn Chaorach had some great views to Ben Lui and back down into Strathfillan. 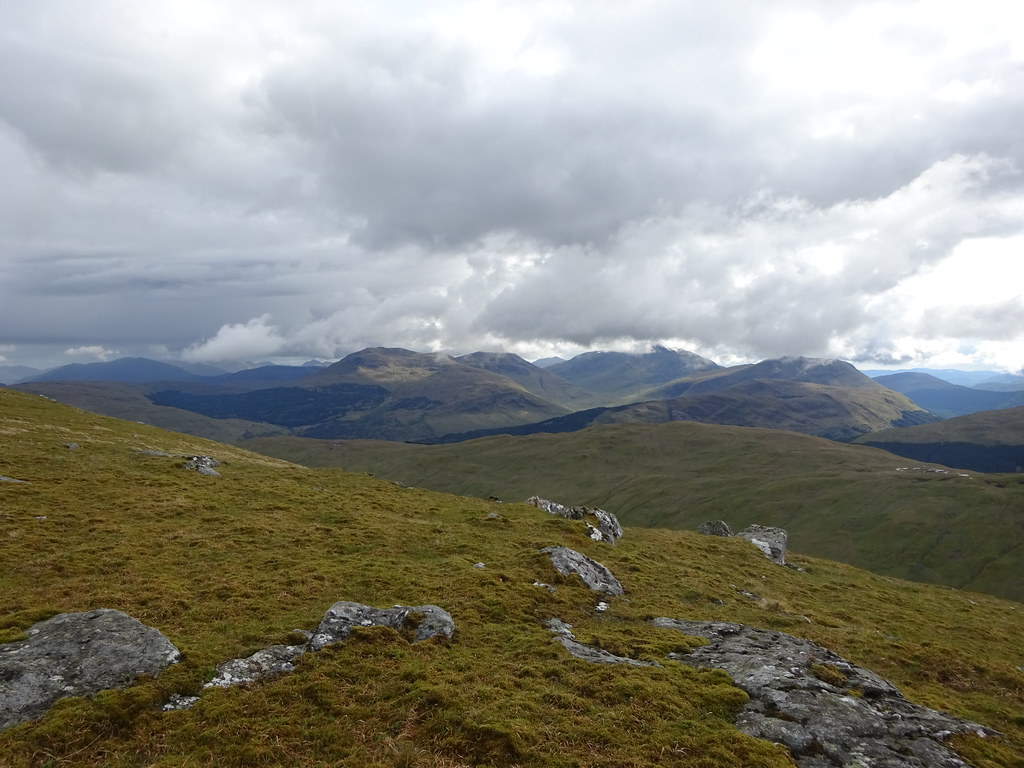 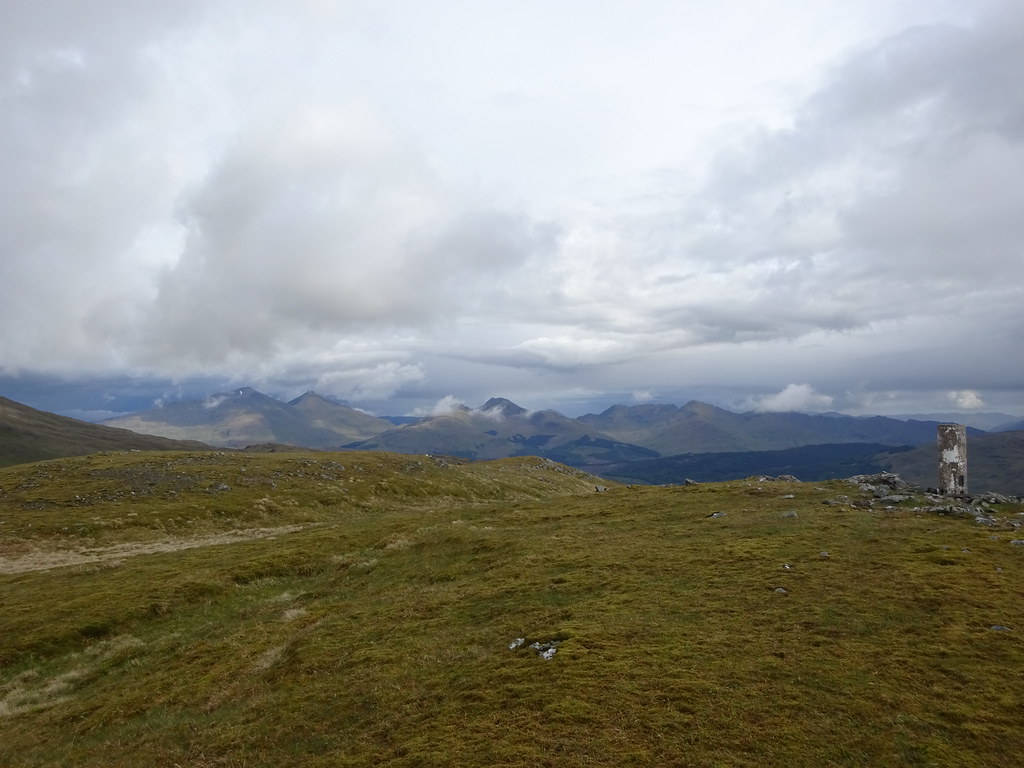 Ben More to An Caisteal from Beinn Chaorach 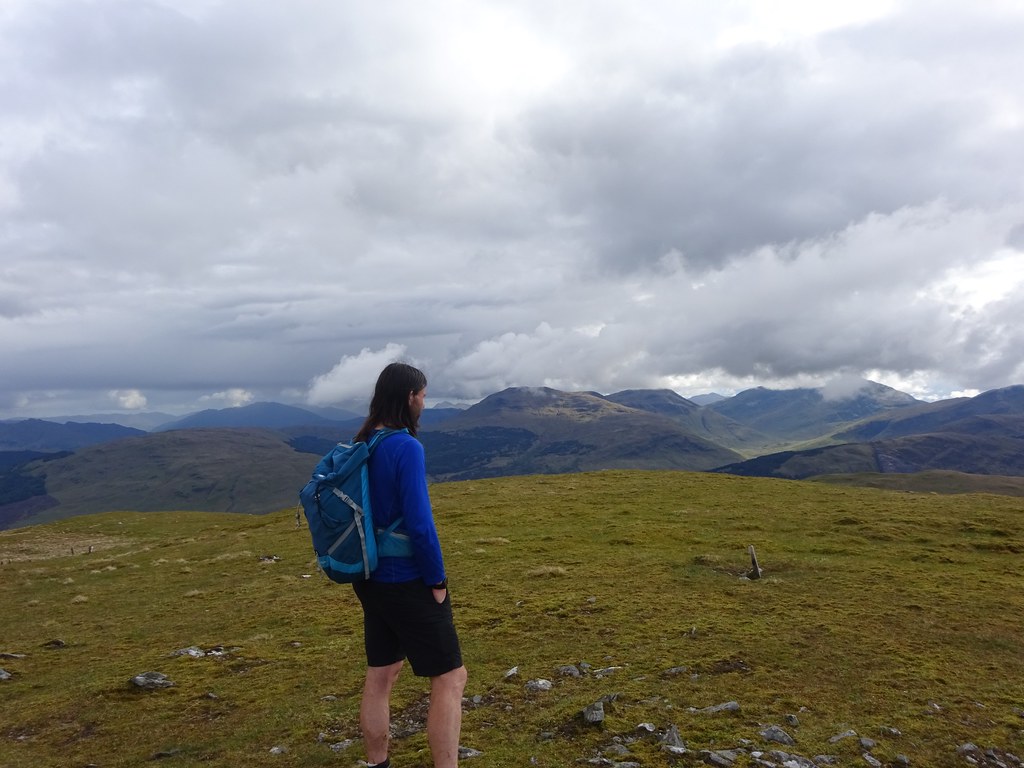 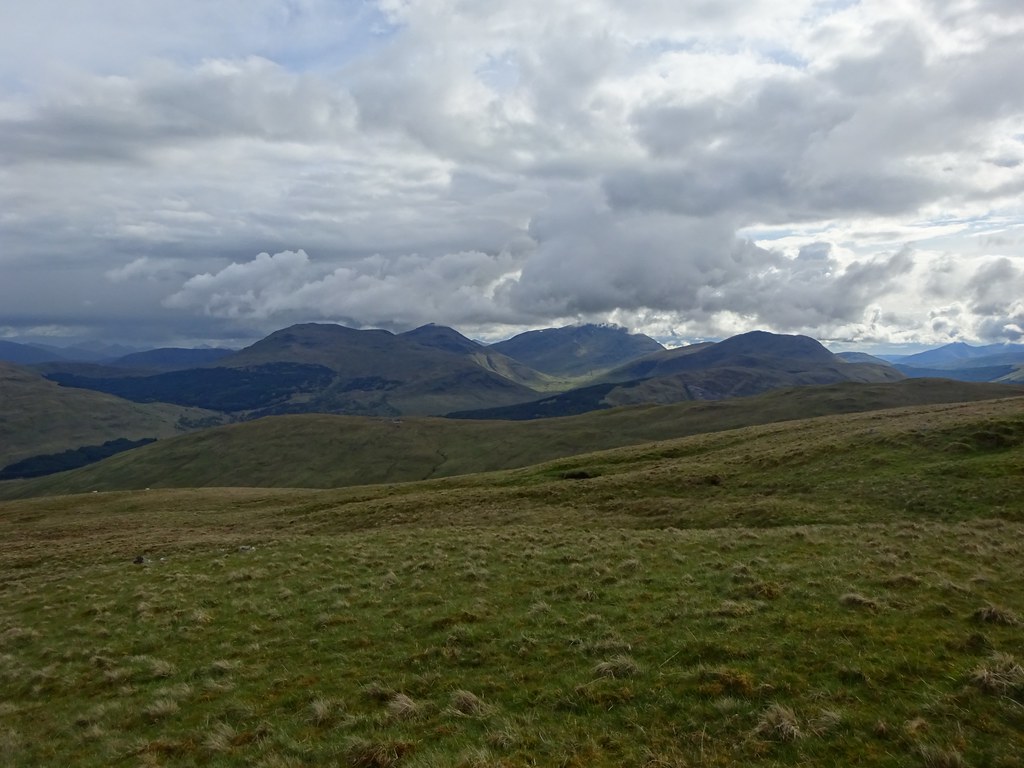 After a quick break I headed for the south ridge of Beinn Chaorach which was fairly easy angled and easy walking. Lower down it got a bit sloppy but as the land was quite intensively grazed, it was still quick. Eventually I hit the track in Gleann a Chlachain. Good timing it appeared as the skies above Ben Challum looked distinctly threatening again. 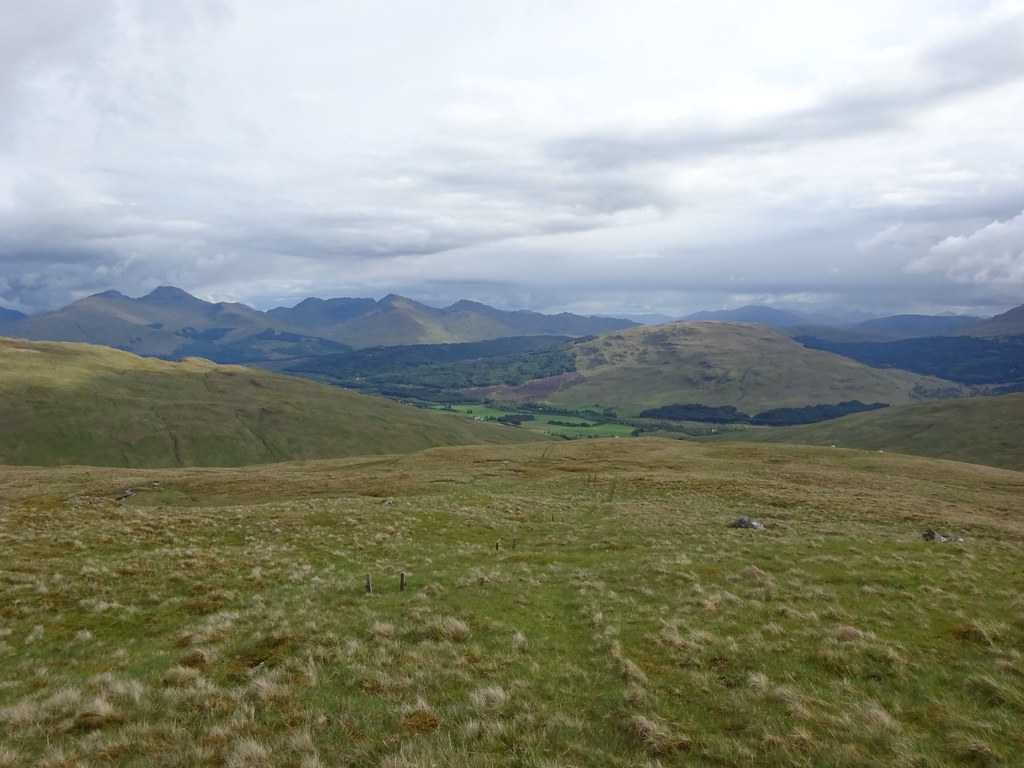 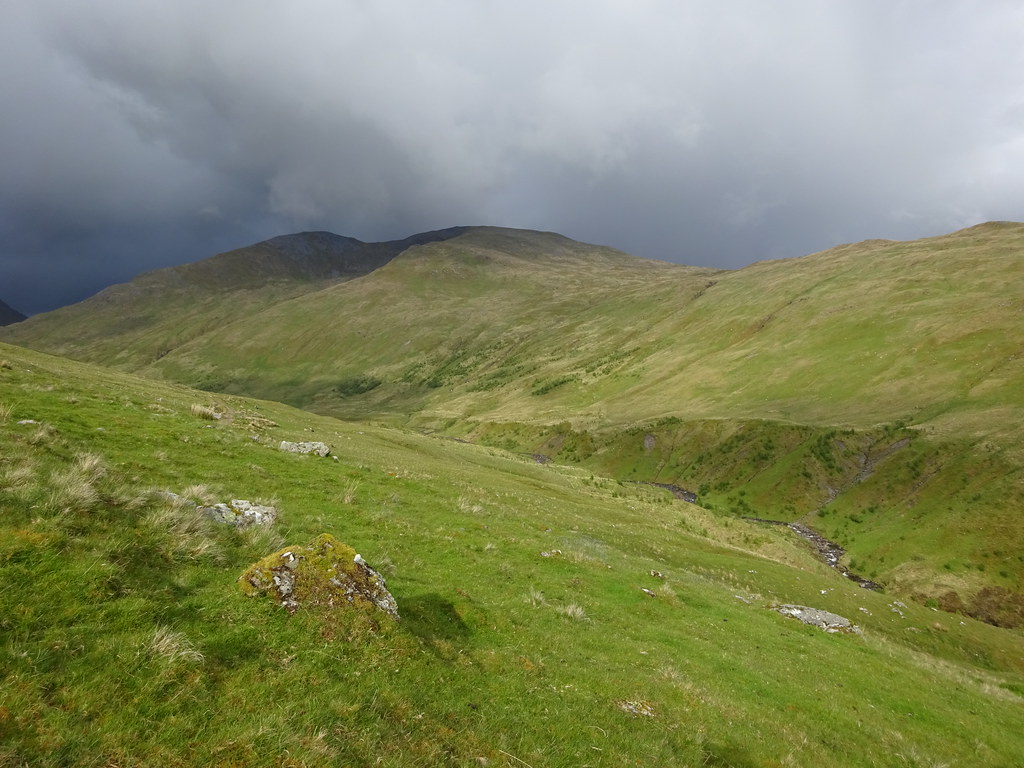 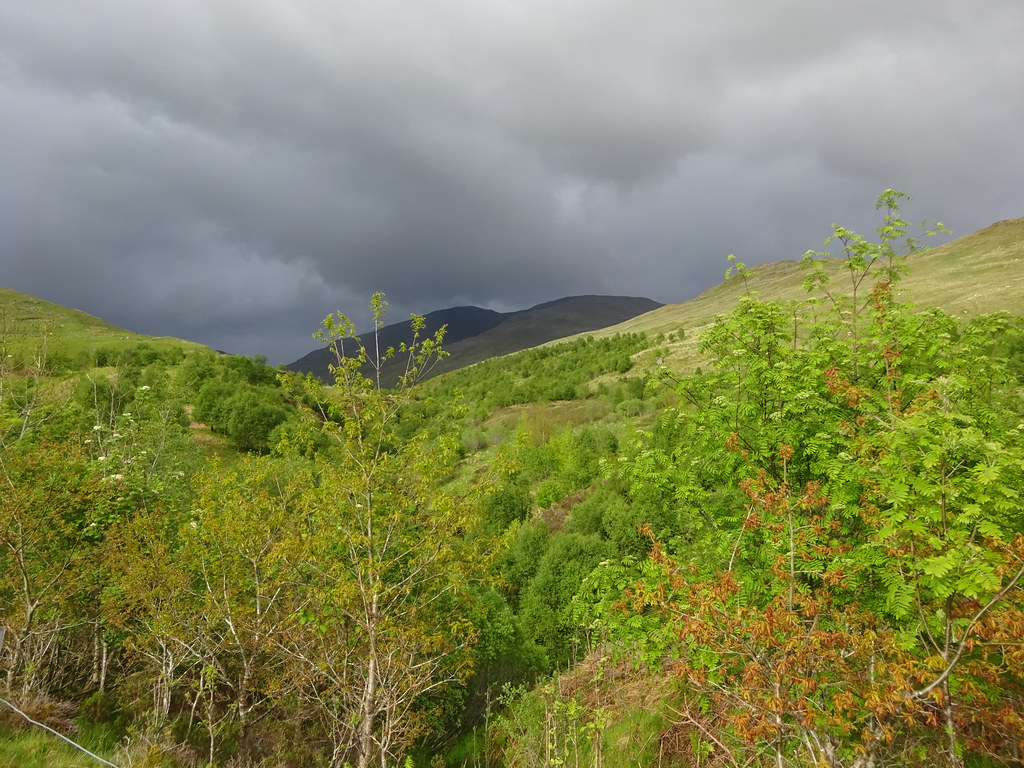 I took a bit of a shortcut in the glen to avoid a loop of track and some cows, and before long I was descending underneath the West Highland Line to the WHW again. I probably could have parked at Auchtertyre and saved myself a couple of minutes of walking as it turns out. As I followed the WHW back to Kirkton and then the A82 the rain returned, and by the time I reached the car it was really tipping down. 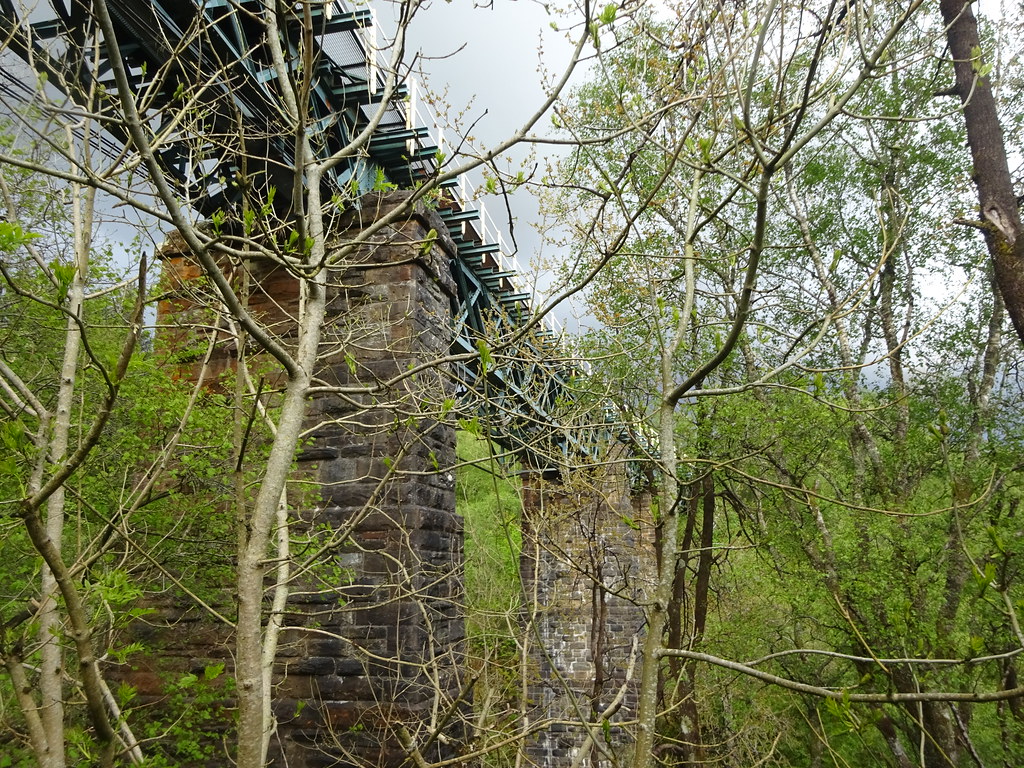 The first 15 minutes of my drive north were in another deluge that I could barely see the road in but things improved after that with sunshine at Glencoe. I finally arrived home at about 9:30pm fairly knackered. Although I had been away for work, I had managed to fit more walking into the week than some of my holidays! This circuit was a great end to that week.

A Borders loop from Holms Water

10 ticks on the east side of Loch Lomond

Abriachan trails from the upper carpark