Not a promising weekend of weather, so we didn't make any big plans. This hill above Garve, along with a couple of other possibilities in the area, had been on the to-do list for this winter/spring, so we parked up at the Silverbridge carpark. At this point, the sun was out and it was the warmest I'd felt on a hill this year. 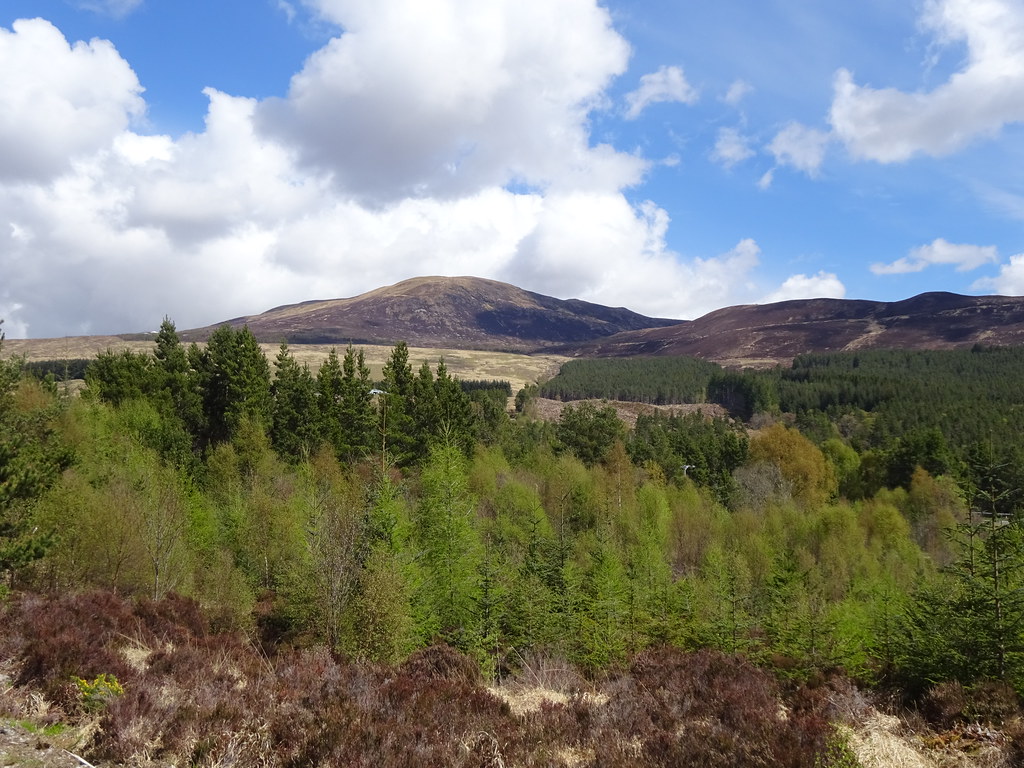 After walking a short distance back down the road verge (spotting a layby on the other side that could have shortened the approach slightly...), we picked up a forestry track, and then the old drove road to Aultguish. This is a reasonable track for a bit, before deteriorating into rutted bog. The sun went in here and we felt a few splashes of rain - suddenly it was a lot colder! 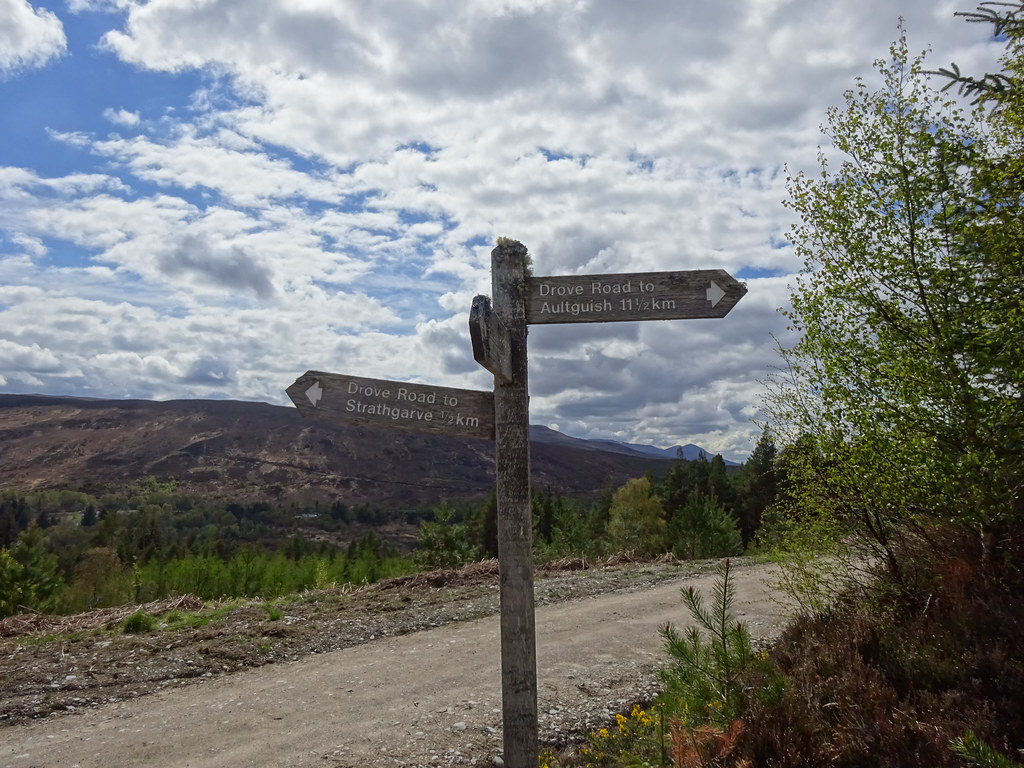 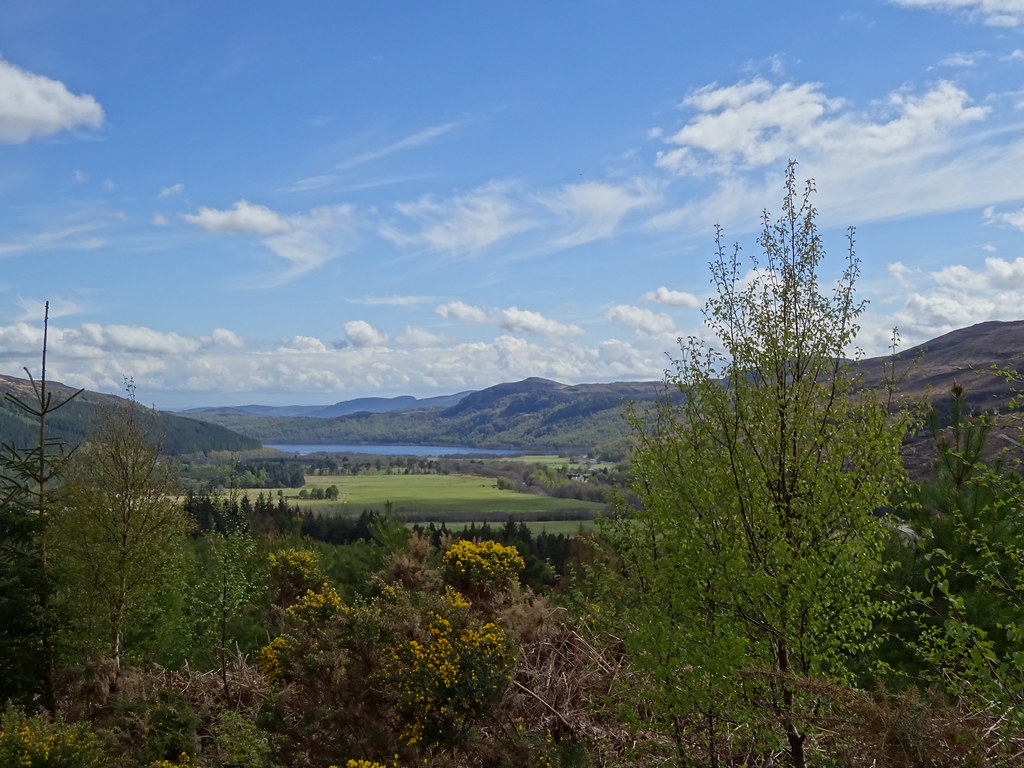 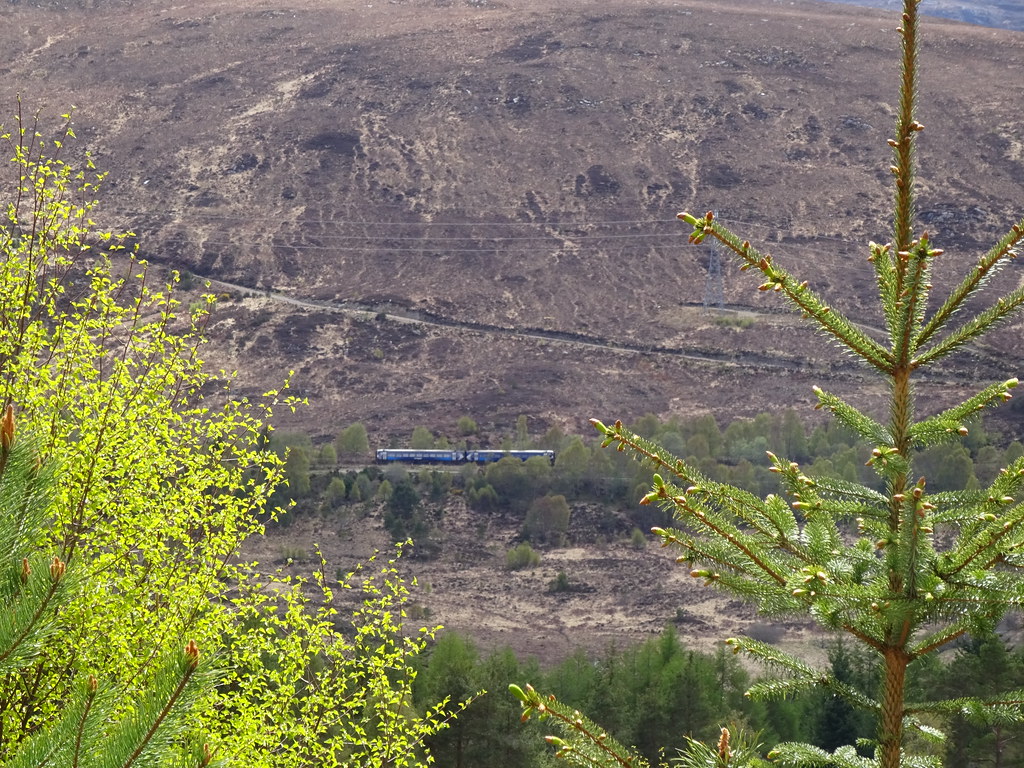 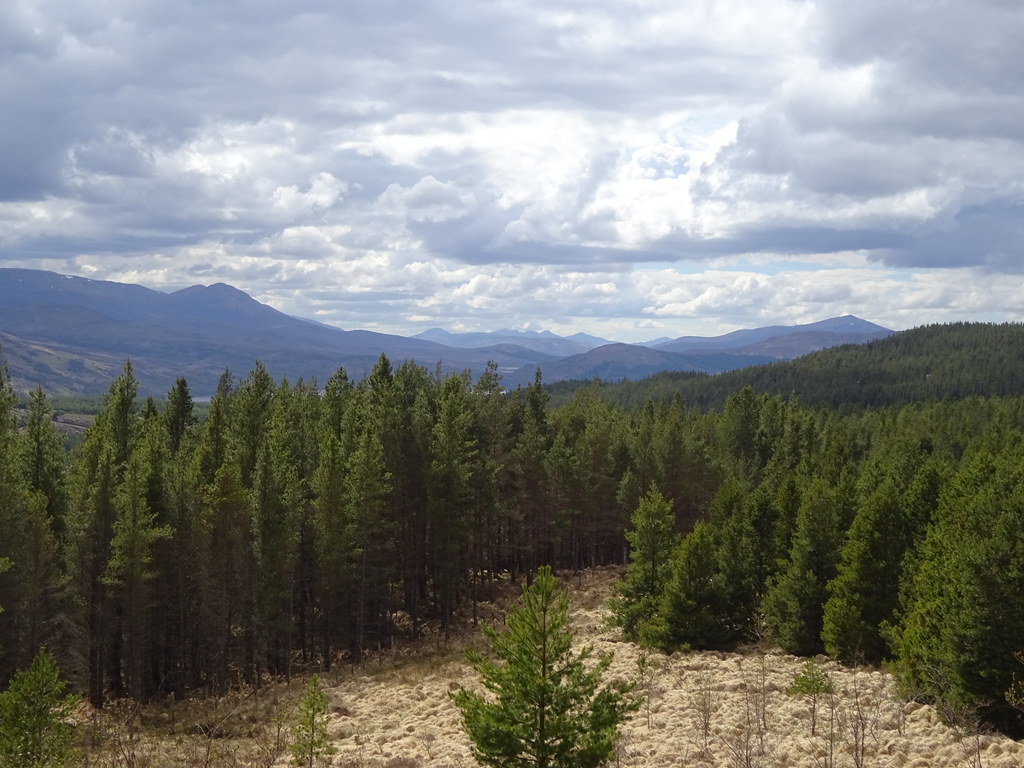 This hadn't been a great week for Jackie fitness-wise, and by the time we reached Lochan nam Breac, we realised that we had probably set our ambitions a bit high. After climbing a short distance further on the drove road, we left it to make our way through rougher ground. I didn't think it was too bad but Jackie was struggling, so we had a break. 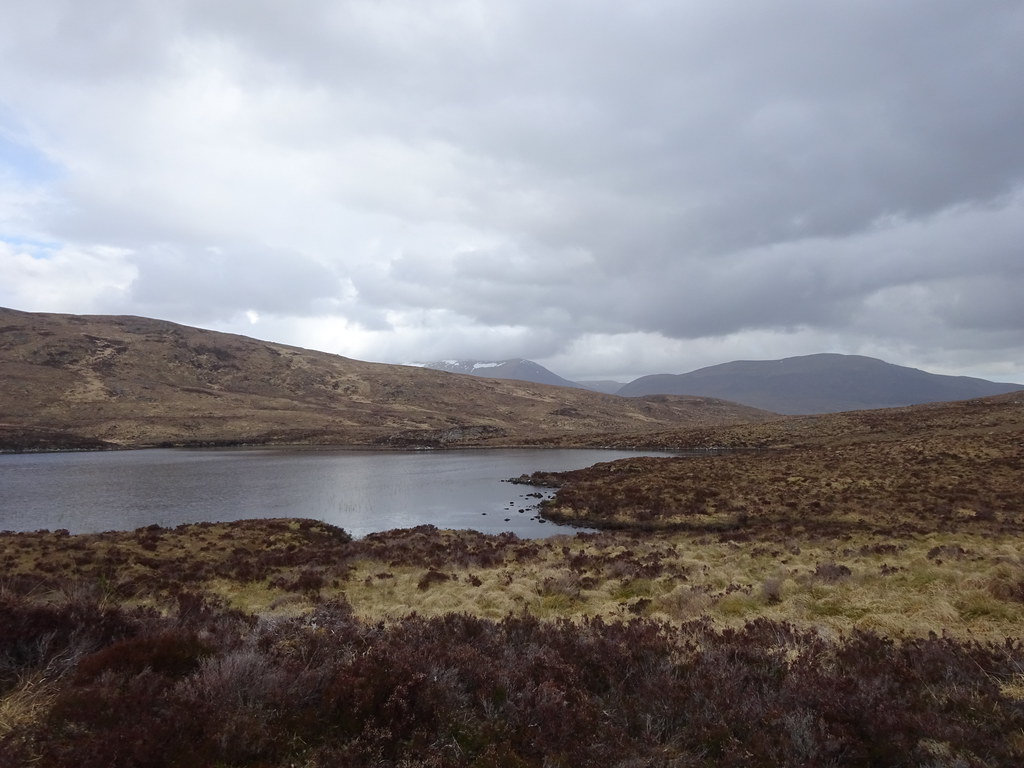 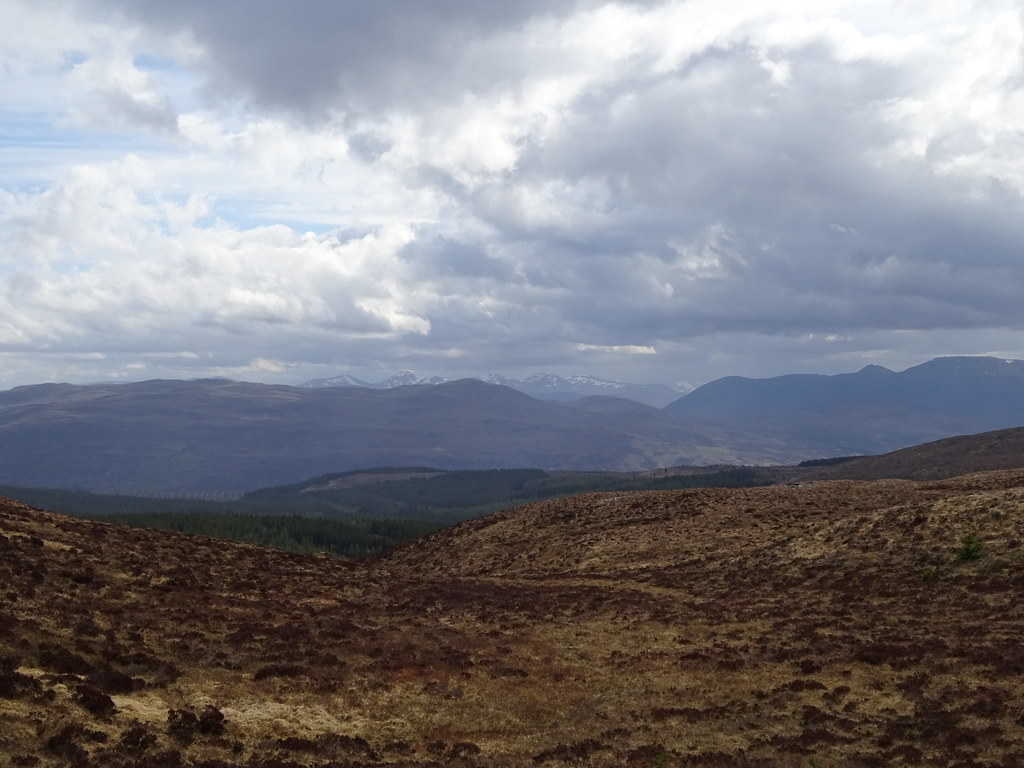 Hills to the north of Glen Strathfarrar

We eventually made the summit after the best part of 3 hours of walking - the overall distance of this route makes it more than just a quick Marilyn. Fortunately the rain had stopped on the summit and the views of Loch Glascarnoch and An Teallach to the west were good. 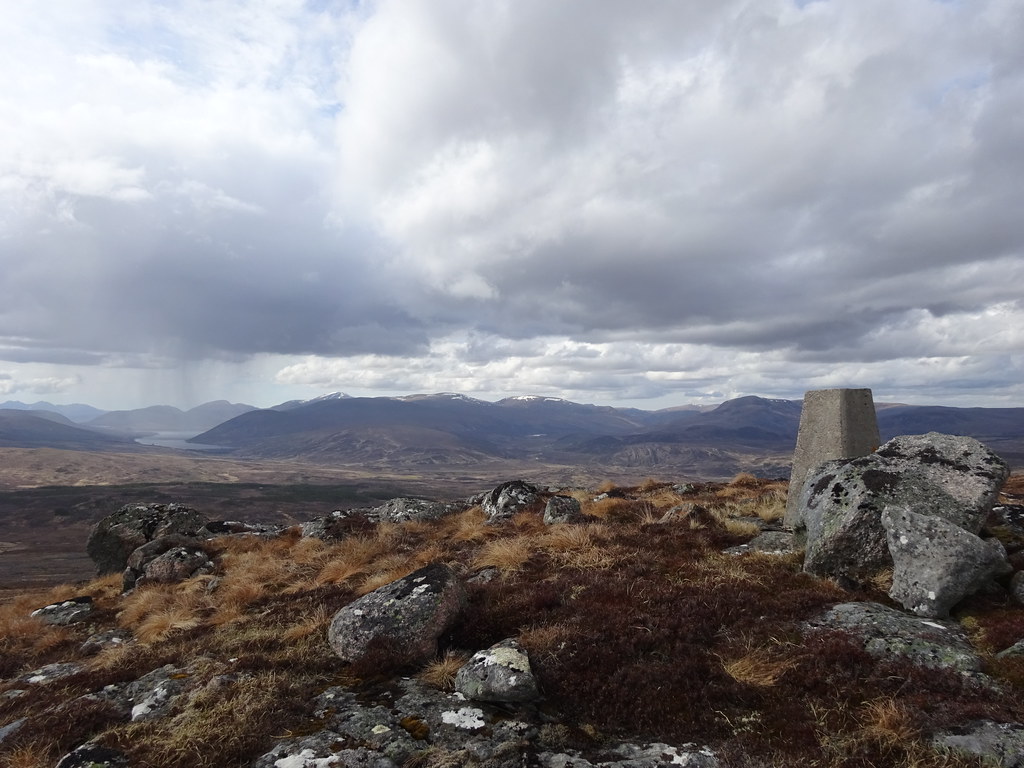 Beinn Dearg and Am Faochagach from the summit 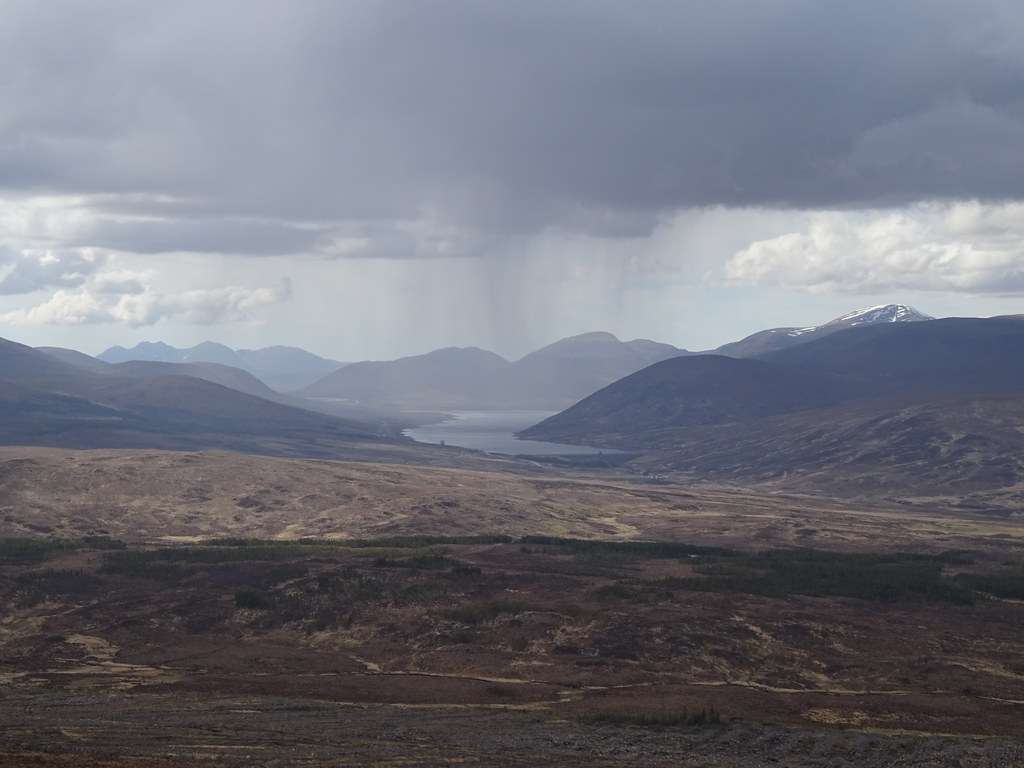 An Teallach and Loch Glascarnoch 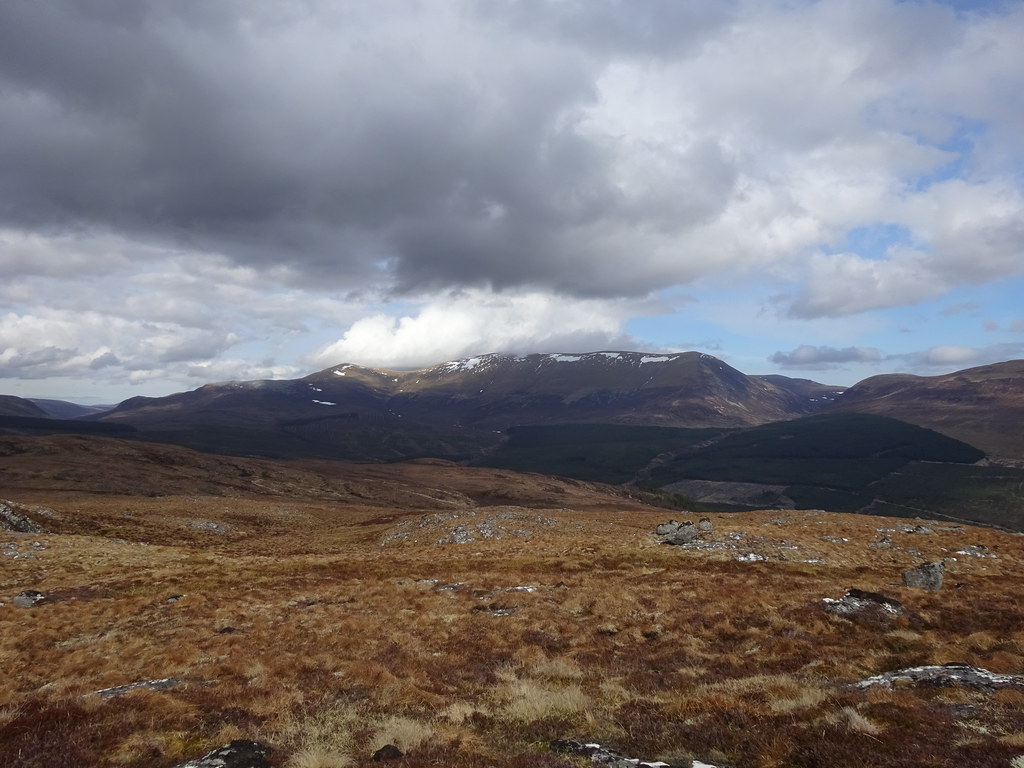 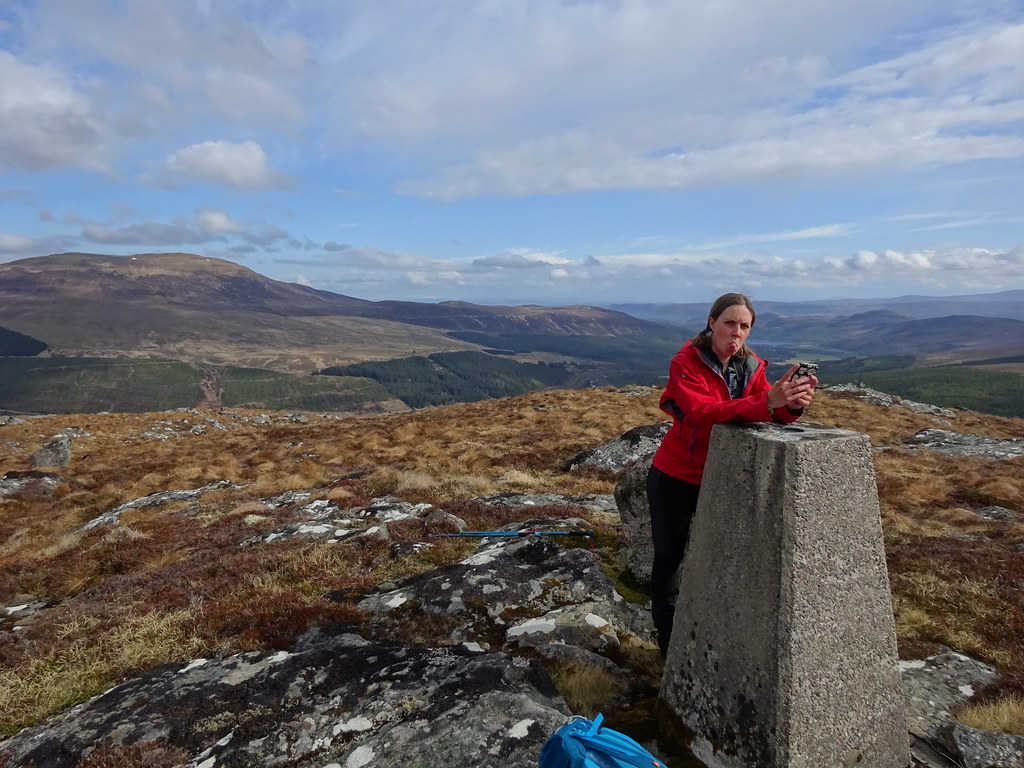 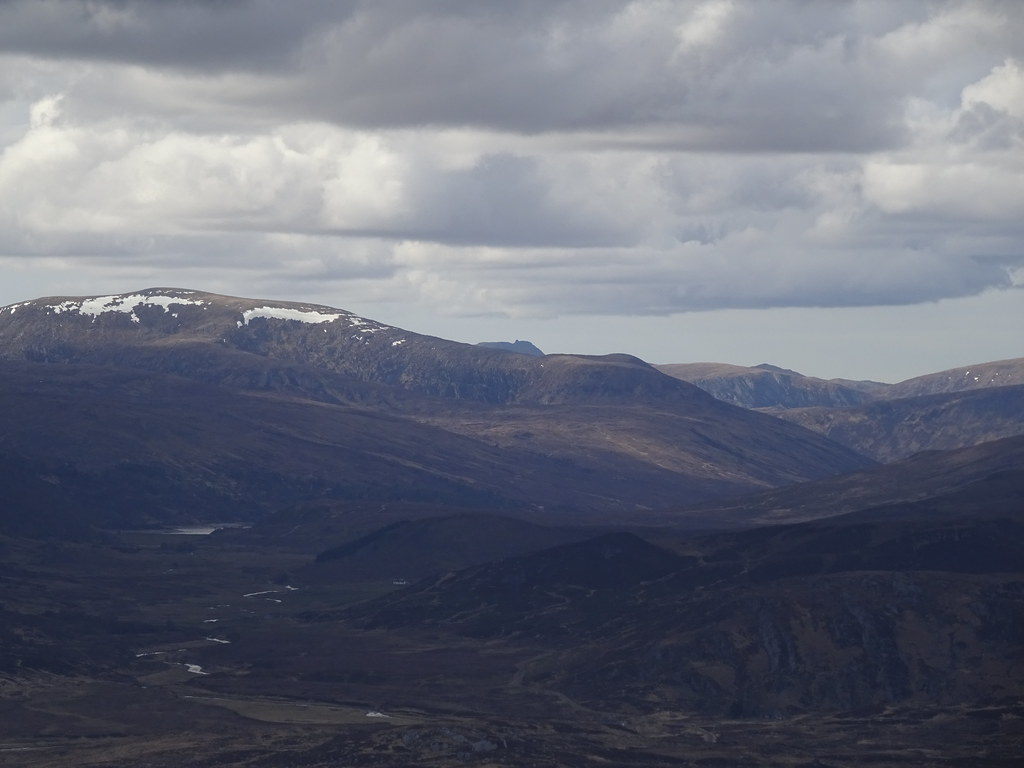 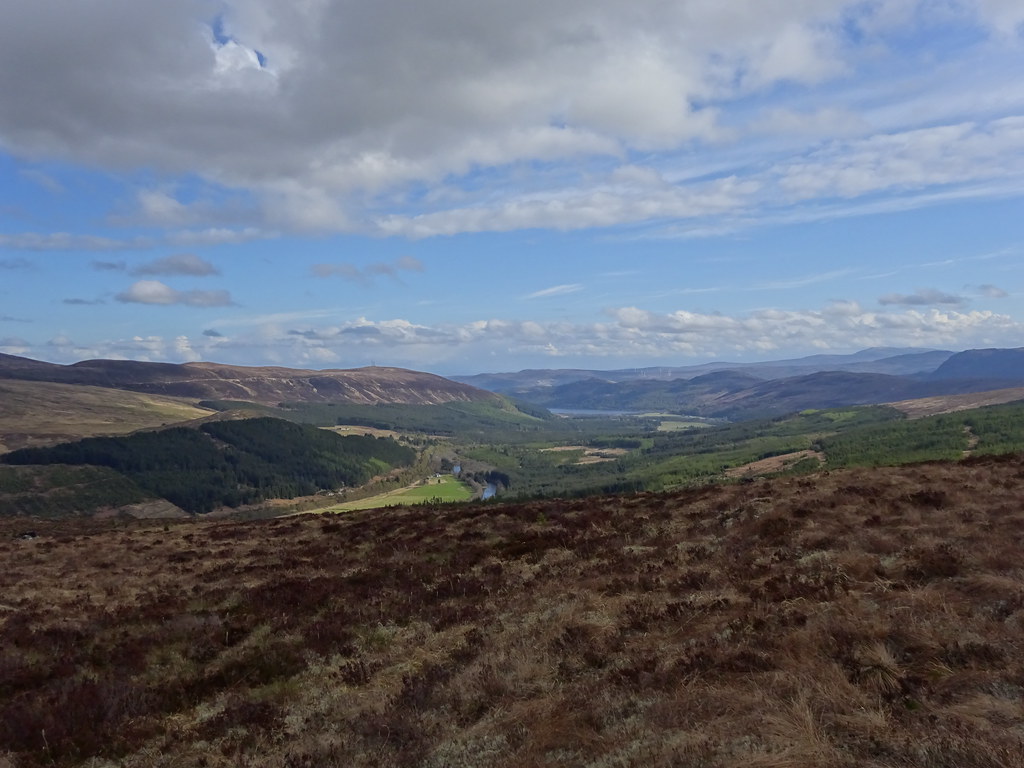 I decided to keep on with the circuit I had done last time on this hill, dropping down to the Black Water and a forestry track to the east. The going was a little rough but there were faint quad-bike tracks to follow intermittently, and best of all, we were going downhill. 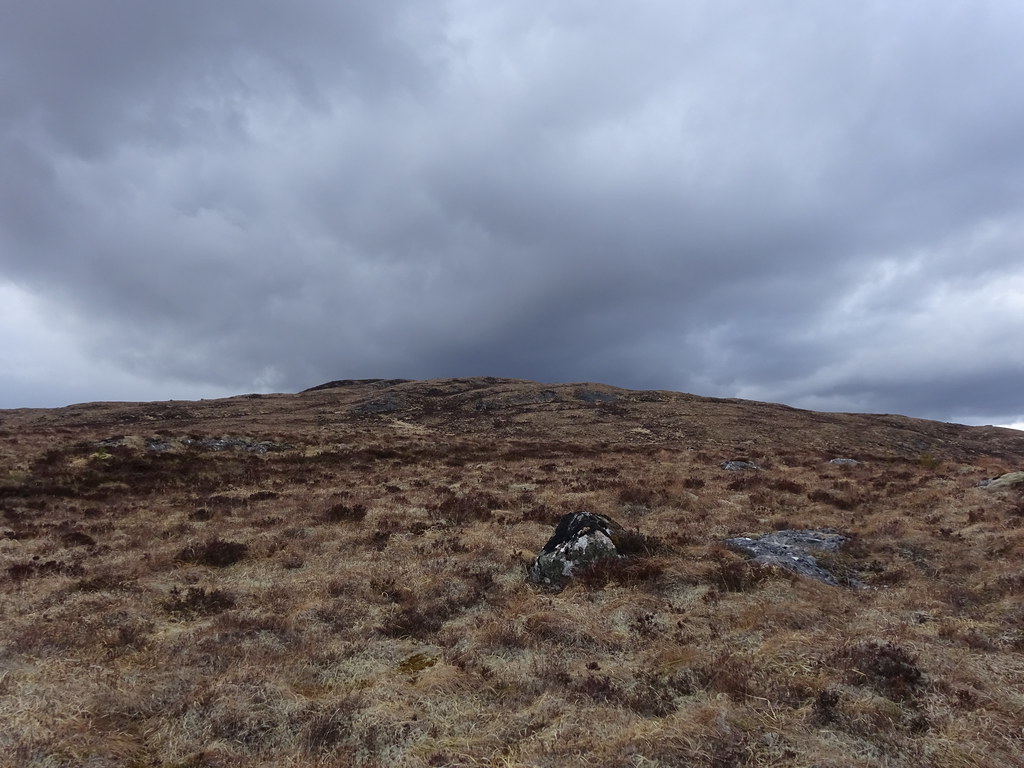 Looking back to the summit - evil weather on its way

I couldn't remember exactly how I had got through the conifers last time, so we went down to a prominent corner and scouted out a route. It was easy enough, although there were sections where a large excavator had driven through and mangled the ground. Eventually we were on a more formal quad-bike route through the brashings that dumped us on our track. 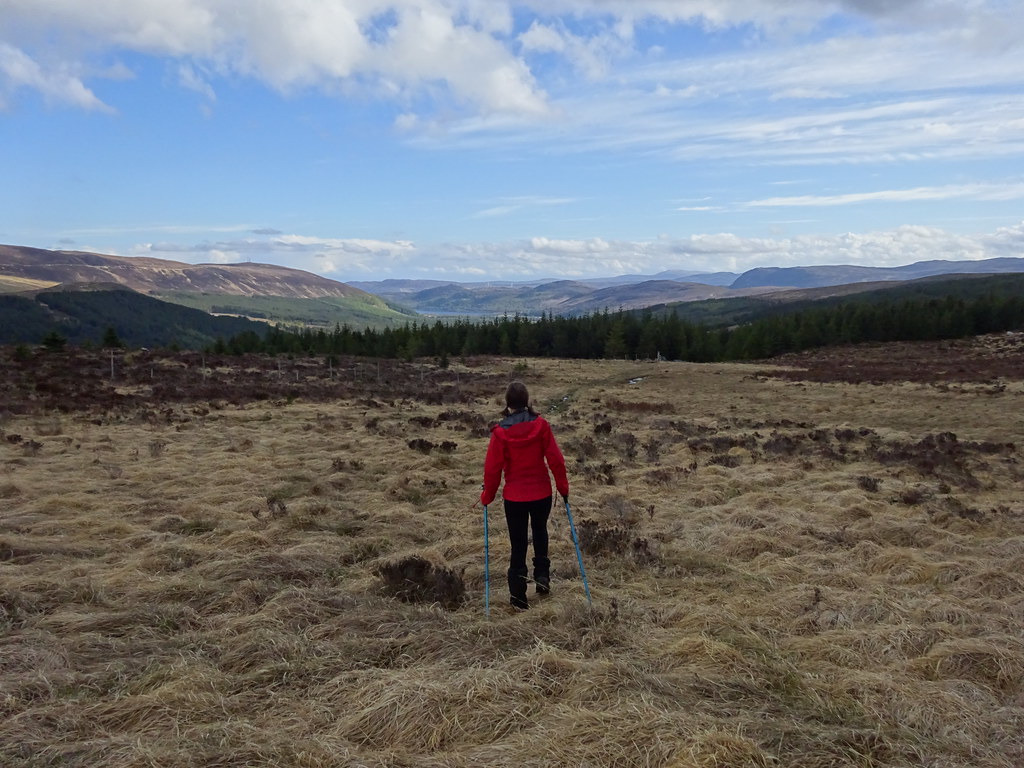 Picking up the edge of the forest 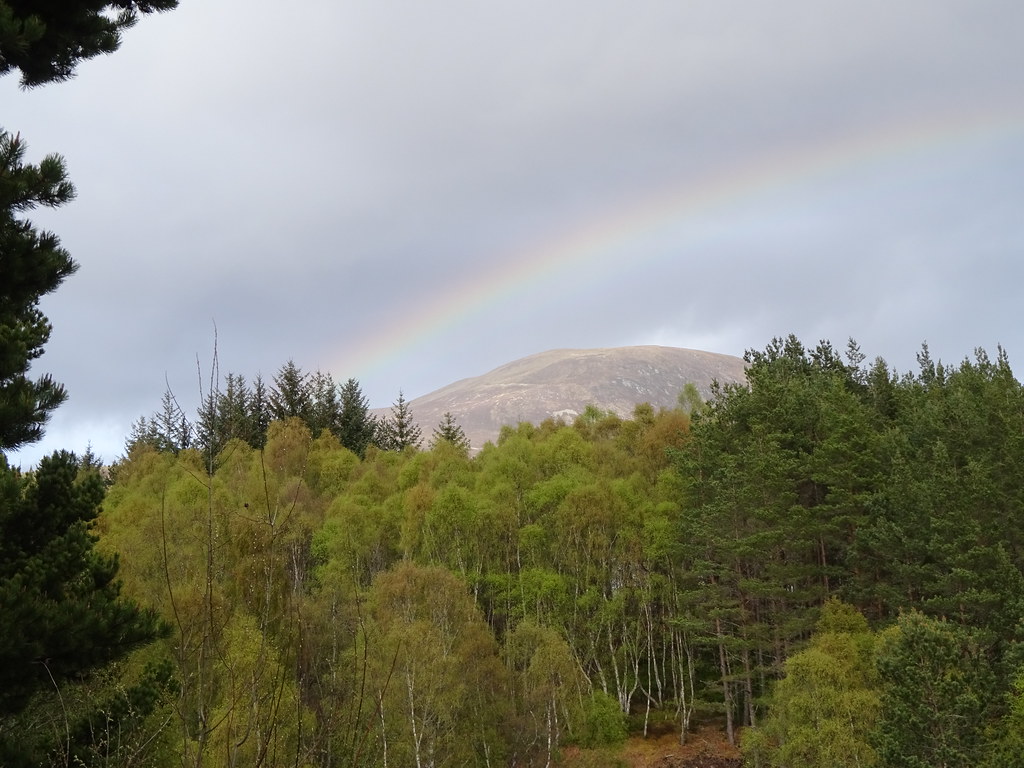 Now it was a straightforward walk back to the point where we joined out outward route. I sped back to the carpark to save Jackie having to walk along the last section of road verge. 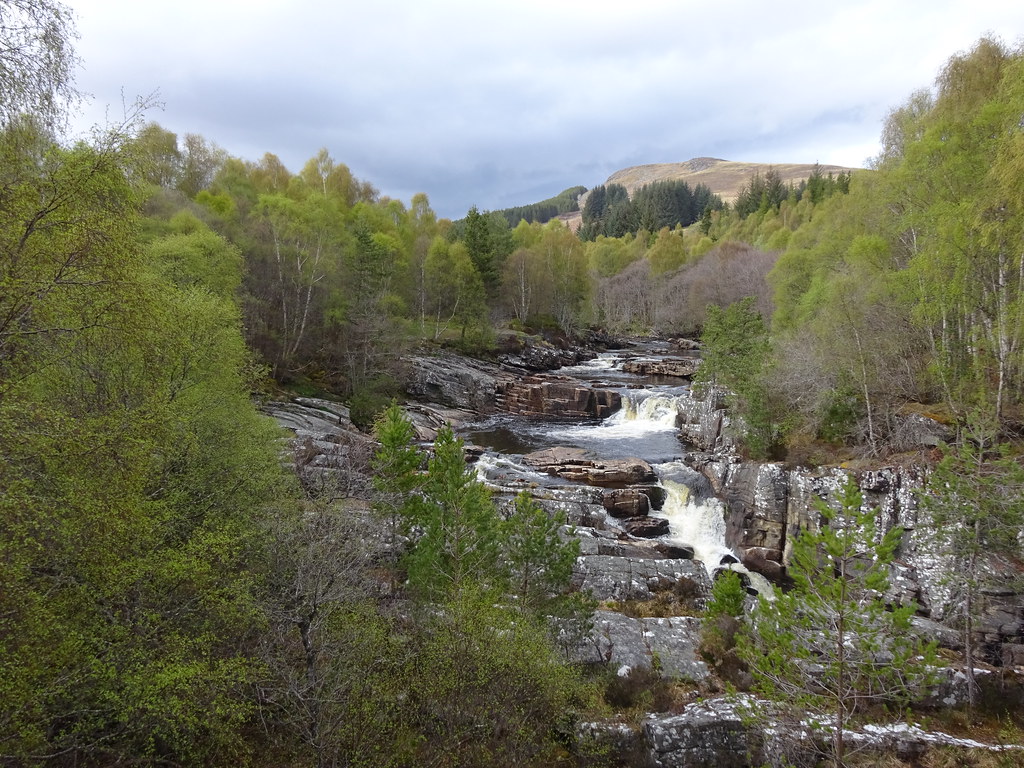 Black Water Falls
Click to mark this as a great report. Register or Login free to be able to rate and comment on reports (as well as access 1:25000 mapping).

Lochs and islands on the long way home from Glasgow

Snow and sunshine - 3 nights on Skye

Back out amongst the biggies - Torridon overnighter