One for the masochist: Torr Achilty again

After we abandoned David at the foot of Ben Shieldaig on Friday evening, he went on to have a stunning day out on Beinn Damh with sunshine and inversions and we....cycled along the canal to Loch Ness from the house. I think we all know who won that round, but after I destroyed a tent pole, staying in Torridon hadn't been an option!

David was making his way back south on the Sunday so I decided to meet him for a quick hoof up Torr Achilty. No way Jackie was going to be persuaded up here again but I remembered a slightly different route I wanted to check out to see if some of the head high heather could be avoided. 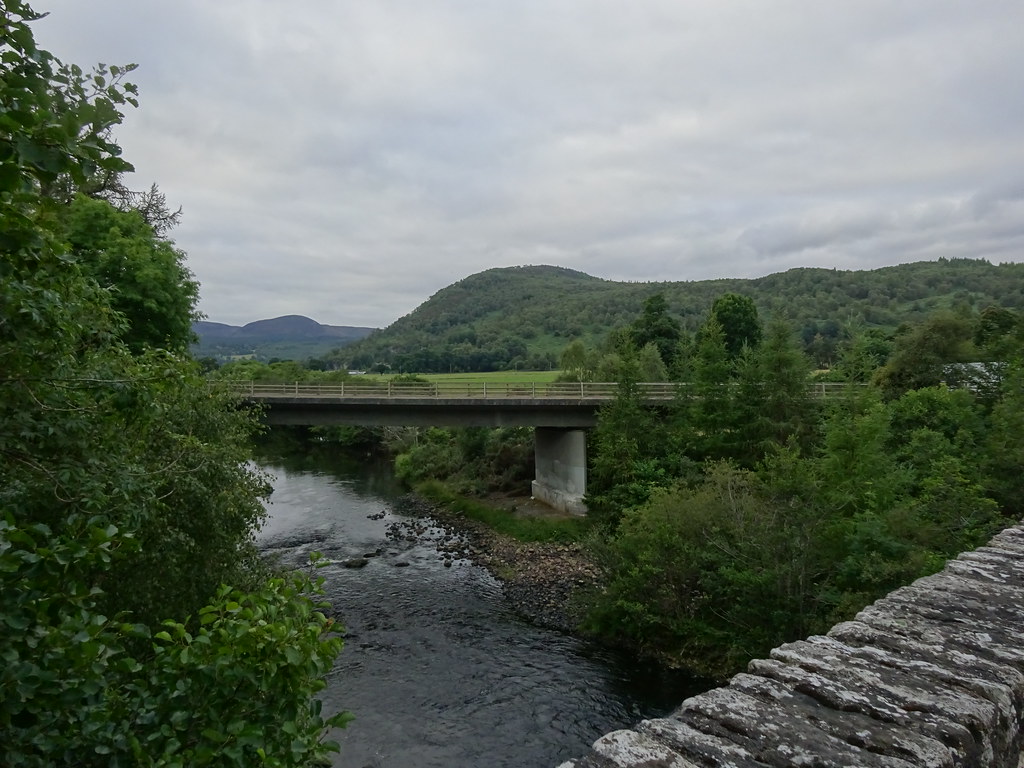 Parking up at the old bridge at the west end of Contin, we set off at 8:30am. In the end I decided to check out my route hunch on the descent, and we passed Torrachilty farm and got onto what could be deemed the NE ridge. You have to dodge around a bit to avoid the old quarry to the right and a couple of small crags, but then there is a path of sorts through the bracken. The bracken is pretty tall though, and the path only helps a bit!


our_route.gpx Open full screen  NB: Walkhighlands is not responsible for the accuracy of gpx files in users posts
As the path veered off to the top of the quarry, we took a less distinct (if that is possible) left branch and headed straight up the ridge. Eventually the head-high bracken is replaced with heather that is almost as high. Again there is a route of sorts through it but I've found pathless heathery hillsides that are more straightforward! Jackie and I descended approximately by this route last December but I think we went out onto the steep slopes to the east unnecessarily. 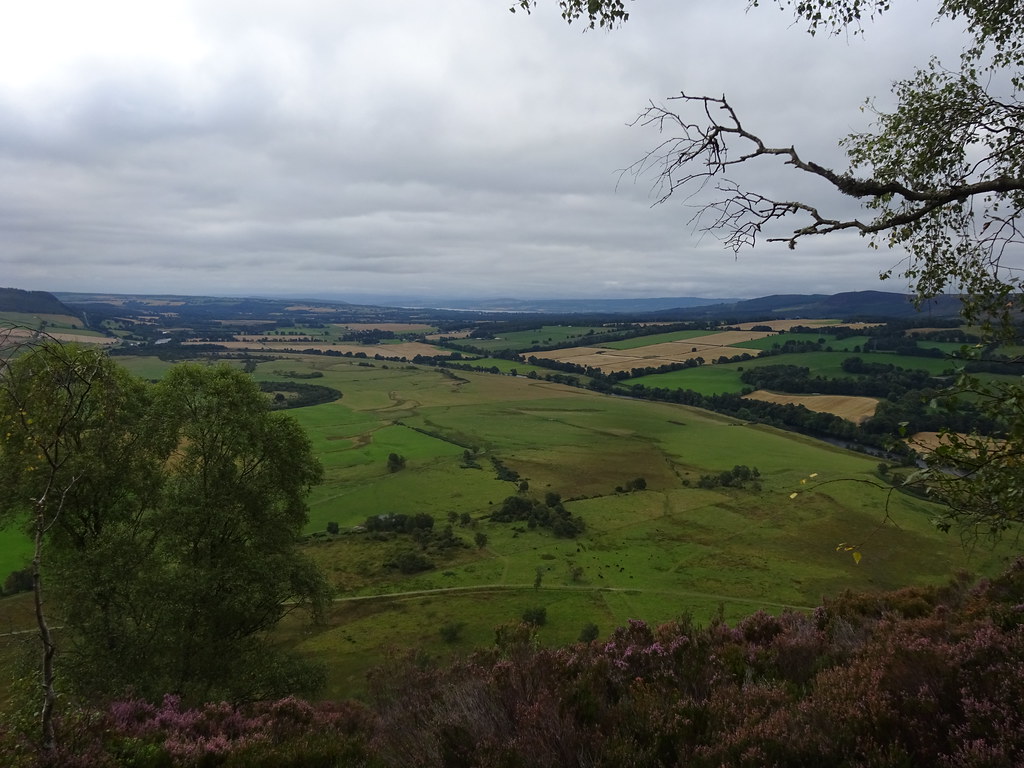 SE to the Black Isle and Inverness

Eventually the trees thinned and after slacking to eat lots of blueberries along the way, we emerged at the summit. I think the views are quite reasonable from here, and don't mind fighting my way up to it once in a while. Thankfully midges were minimal too. 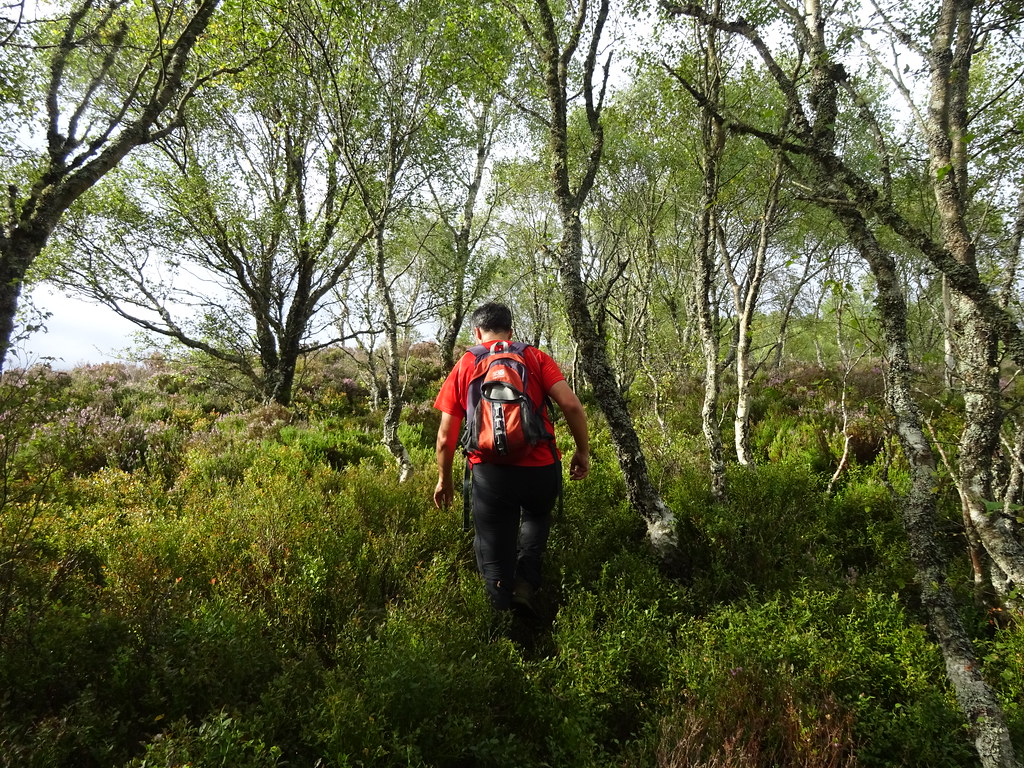 David pushes through the last of the trees and vegetation 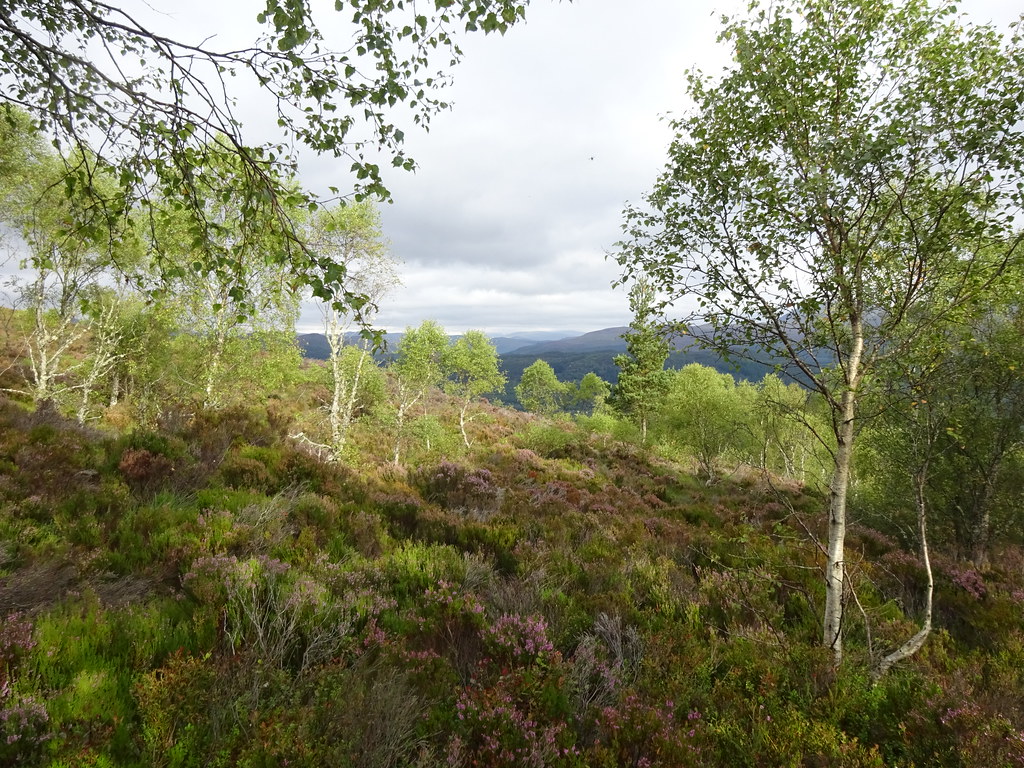 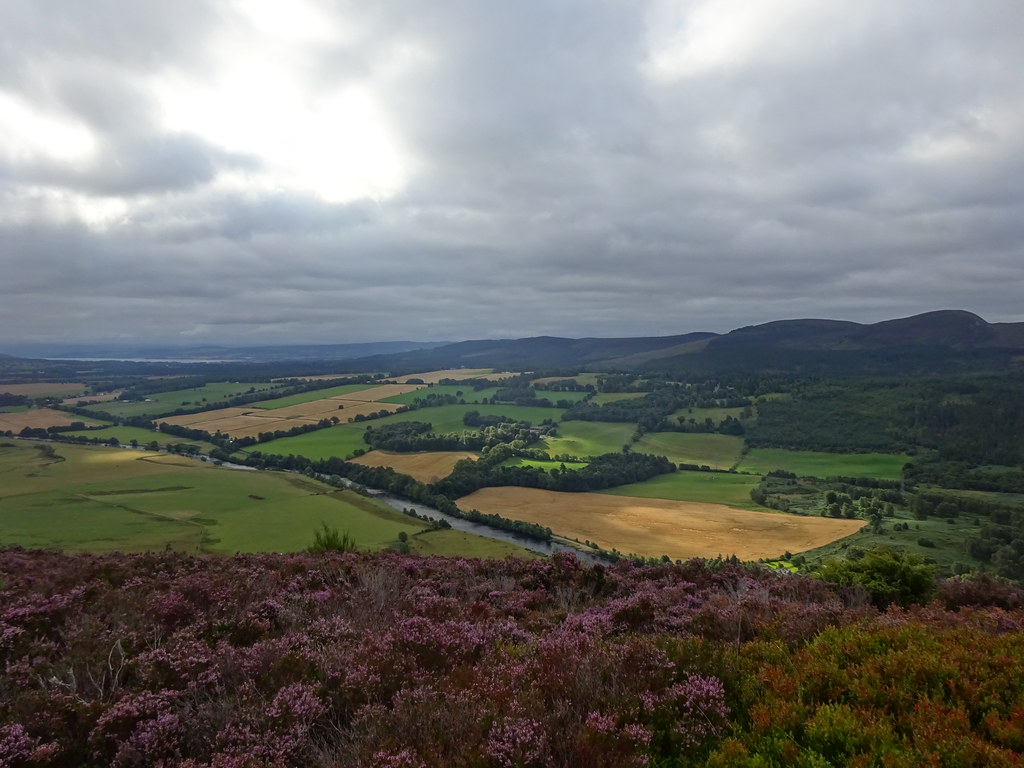 The Conon, Cul Mor and Cul Beag (not those ones) 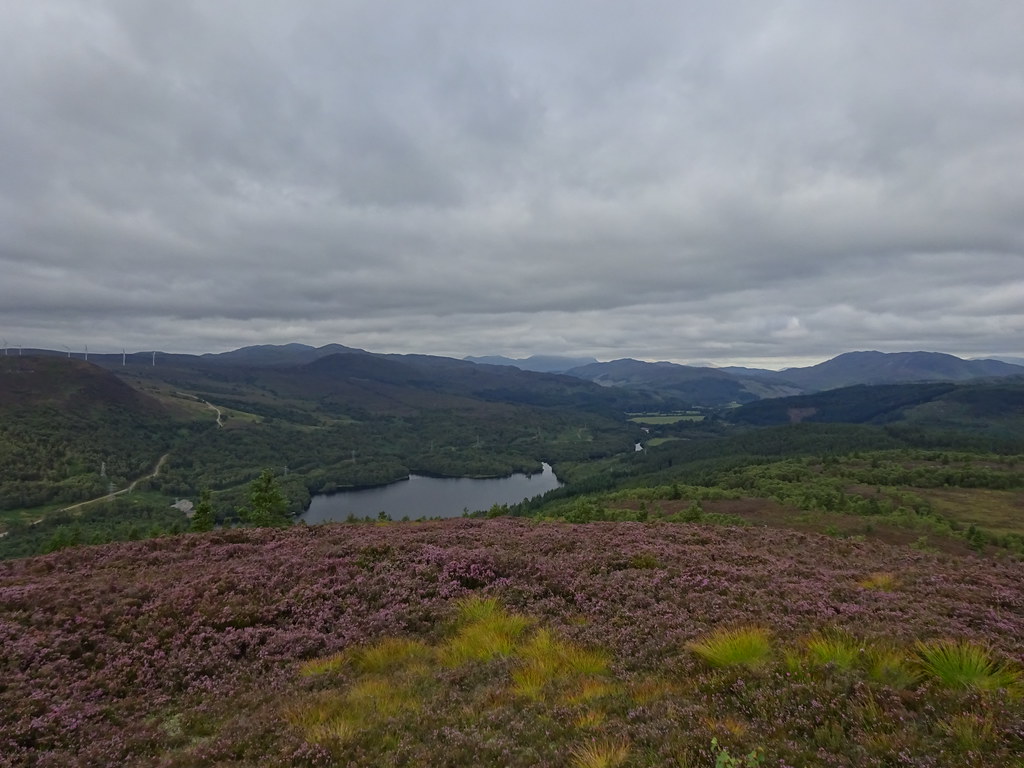 And now to that descent route. I had previously noticed quite an obvious path leading away to the west, and I suspected it might swing around eventually and drop back to Torrachilty farm. Having previously come up from here, I knew there were decent animal tracks through the lower woodland - would they meet up?

No they wouldn't - a few minutes from the summit, the obvious path peters out into deep heather

. On the plus side, I can confirm that the deep heather it lands you in is not quite as bad as the stuff we had shortcut through last time, so it is definitely worth heading west for a little bit. Soon enough we dropped into the lower woodland where the heather abruptly ends, and the going became quite easy. David pointed out some mushroom types - I've never had the confidence to know what's what fungi-wise, so it was quite interesting. Then we appeared to be traversing the top of the old quarry and joining our outward route. 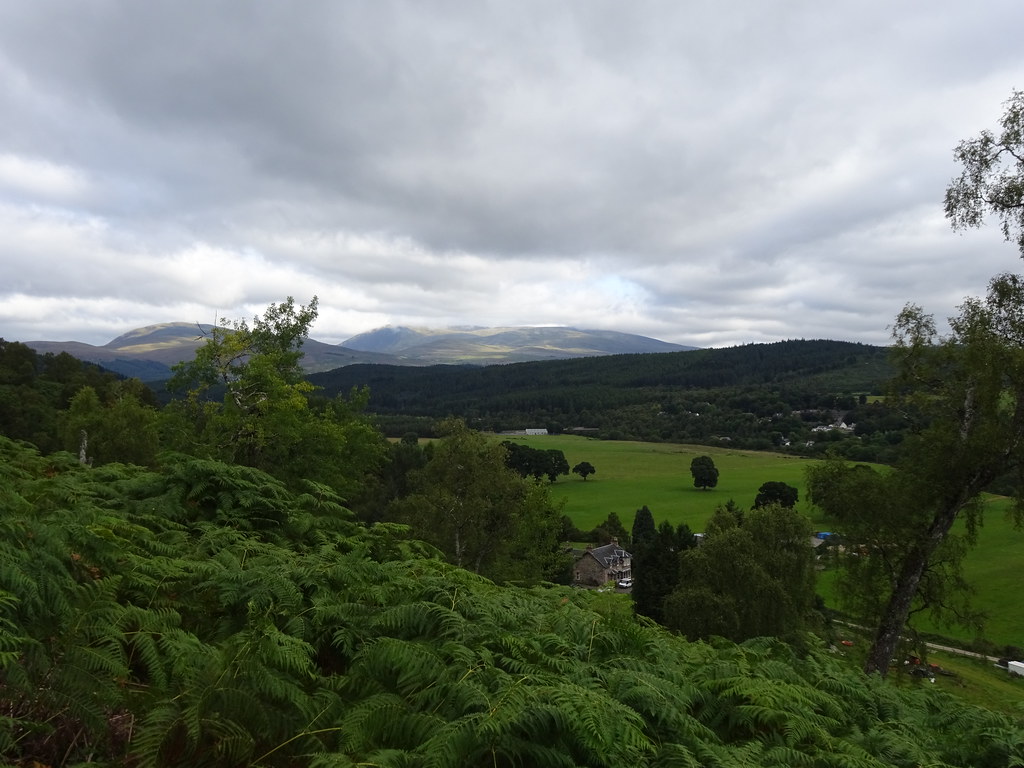 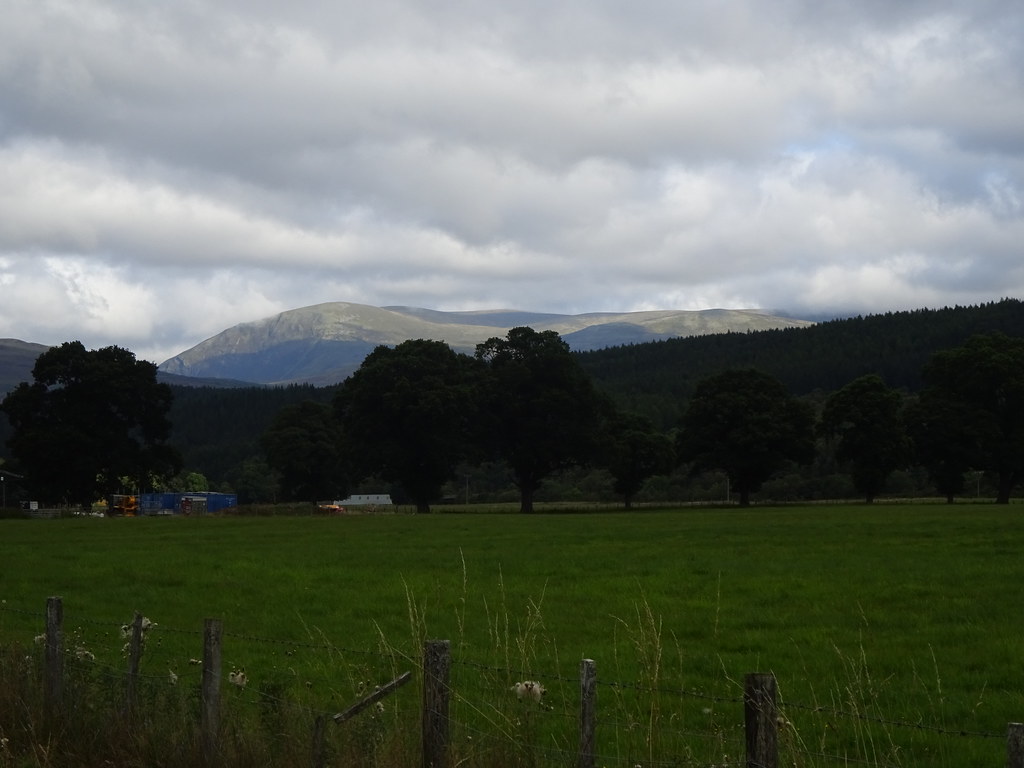 Ben Wyvis with a bit of sunshine

Soon back on the farm track, we were done shortly after 10:30am. Although there were a couple of midges around, I hung around for a cup of tea before heading home.
Click to mark this as a great report. Register or Login free to be able to rate and comment on reports (as well as access 1:25000 mapping).

A catch-up on the Devil's Elbow hills

An Groban and Flowerdale

A scorching return to the eastern Mamores