The usual circuit over Beinn a' Bha'ach Ard

Feeling the need for a hill this weekend, going slightly west looked preferable weather-wise. Jackie wasn't going to manage anything like Beinn a' Bha'ach Ard at the moment so she decided to cycle some of the way up Glen Strathfarrar instead. I decided to go for much the same approach as I had the last couple of times.


our_route.gpx Open full screen  NB: Walkhighlands is not responsible for the accuracy of gpx files in users posts
We were on our way by about 12:20pm, the weather being a bit greyer than hoped for but otherwise quite calm. We did the first mile together - me moving at quite a march and Jackie dawdling in her lowest gear! 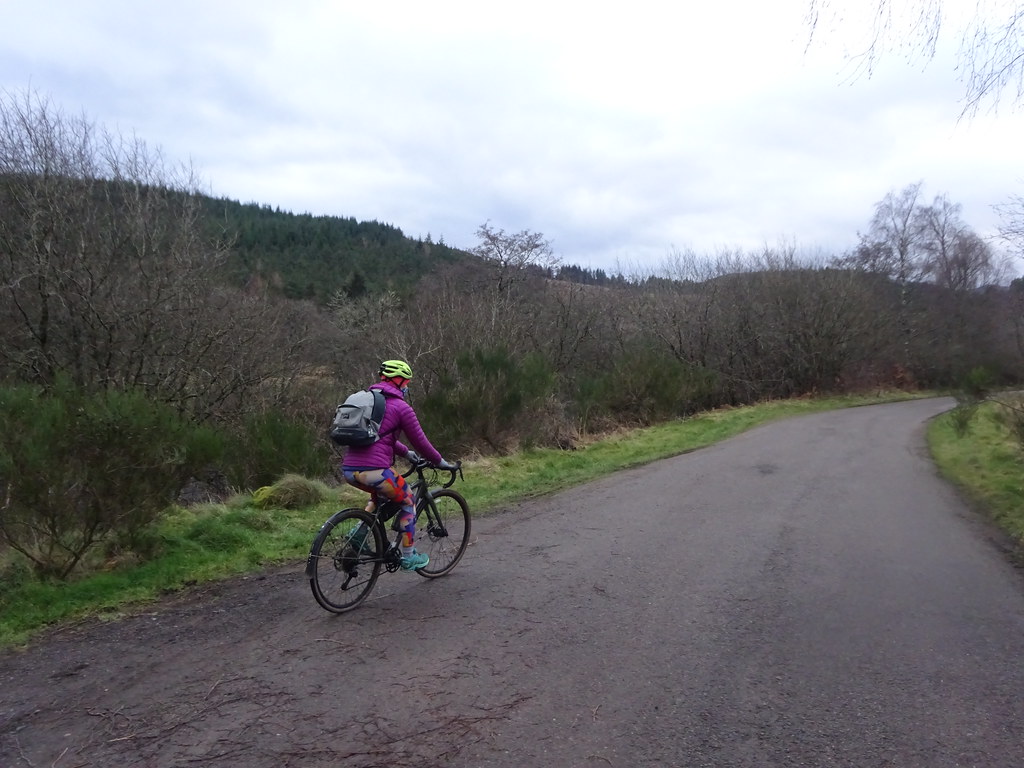 Jackie heading off for a cycle 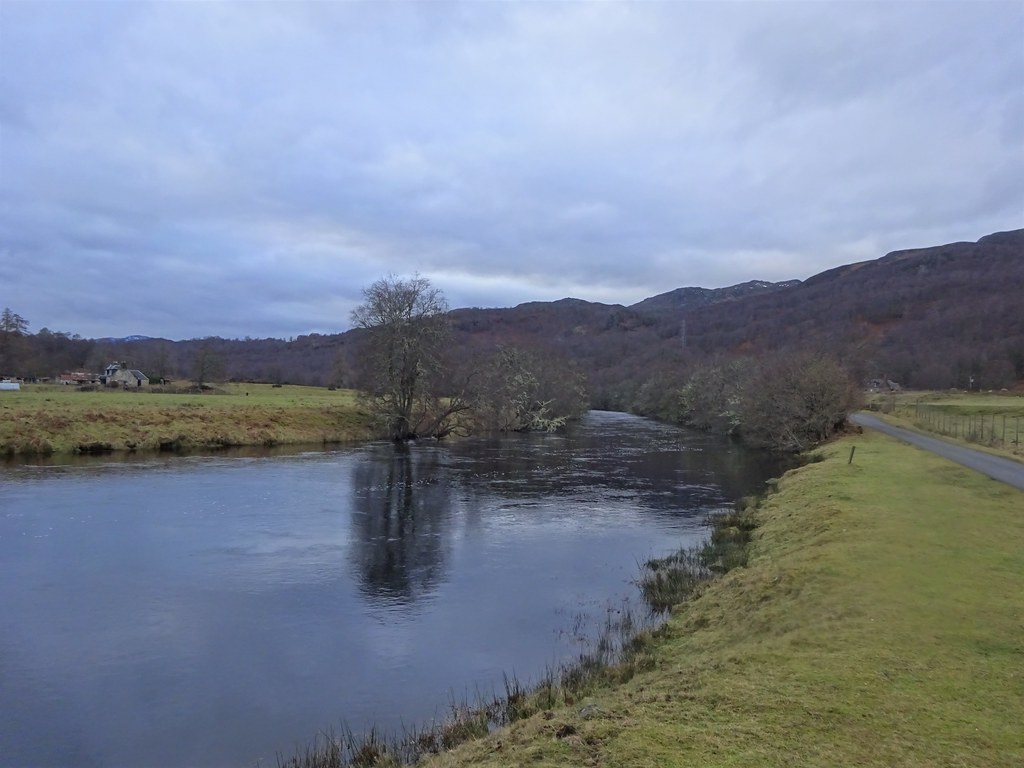 At Culligran power station I left Jackie and the tarmac road and headed up a track to the Neaty Burn. Last time I was up here I'd got straight on the hill at Carn Coire na Muic and worked my way up through the heather and woodland. This time I thought I'd try using a newish track up to a hydro scheme - I don't know if this was there in 2015, but I wasn't aware of it then. 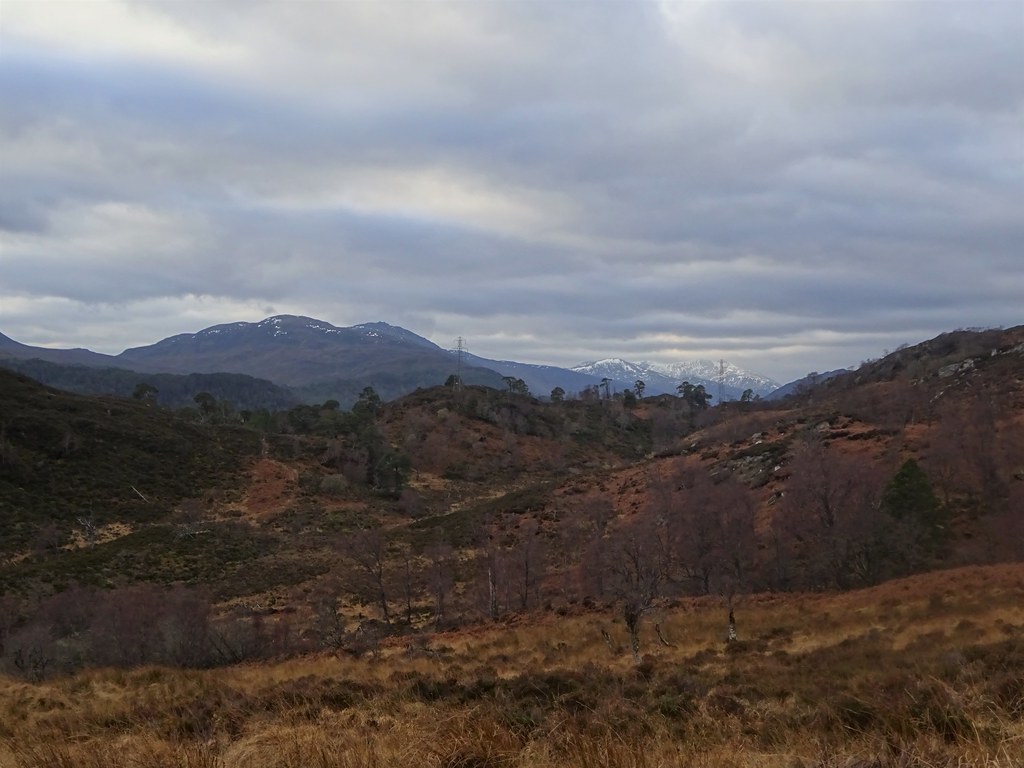 The glen at the turbine house was pleasant and wooded, and above this the track to the dam becomes very steep. It got me some height quite rapidly though, and I decided to leave it once it levelled off a bit and there was a rough quad-bike track on my right. 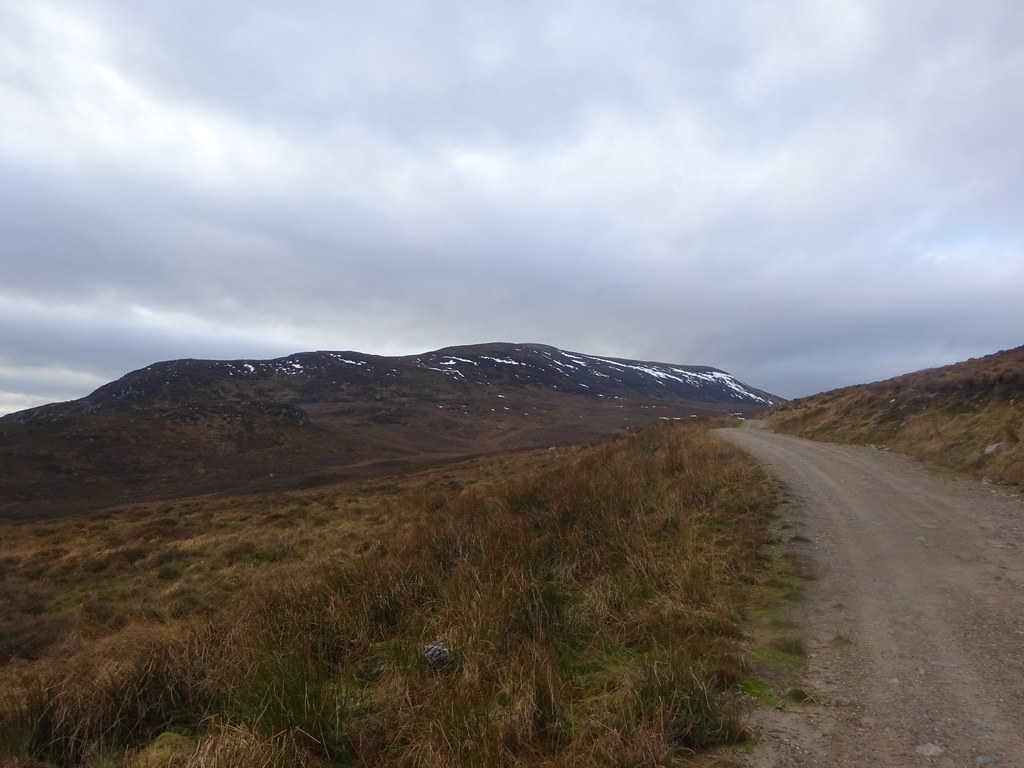 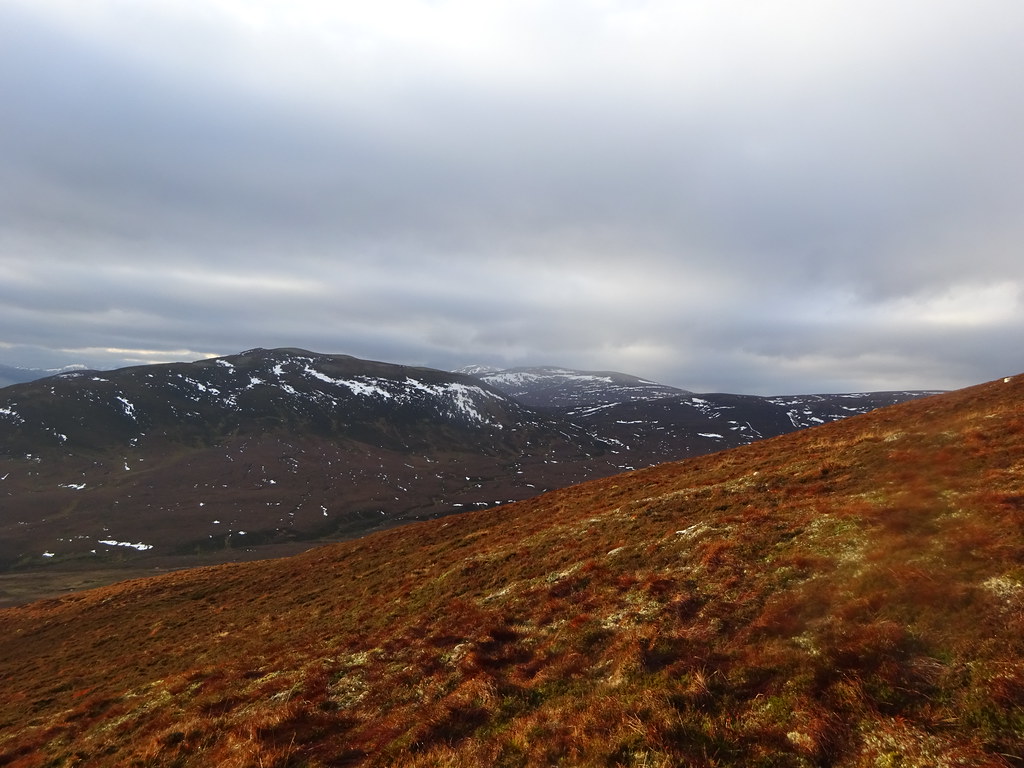 The quad-bike track didn't go in my direction for very long so I hit out across the heather to reach Creag a' Gharbh Choire. This wasn't too bad but it was a little moist in places - probably mostly down to the recent snowmelt. I hit the ridge (such as it is) just before a steep notch which I had to drop into, then it was easy walking to another bump. Ahead the final cone of the summit reared up, and it looked as though I could have followed the hydro track to the end and picked up another quad-bike track to this point. Easier perhaps but I think I prefer getting on the ridge. 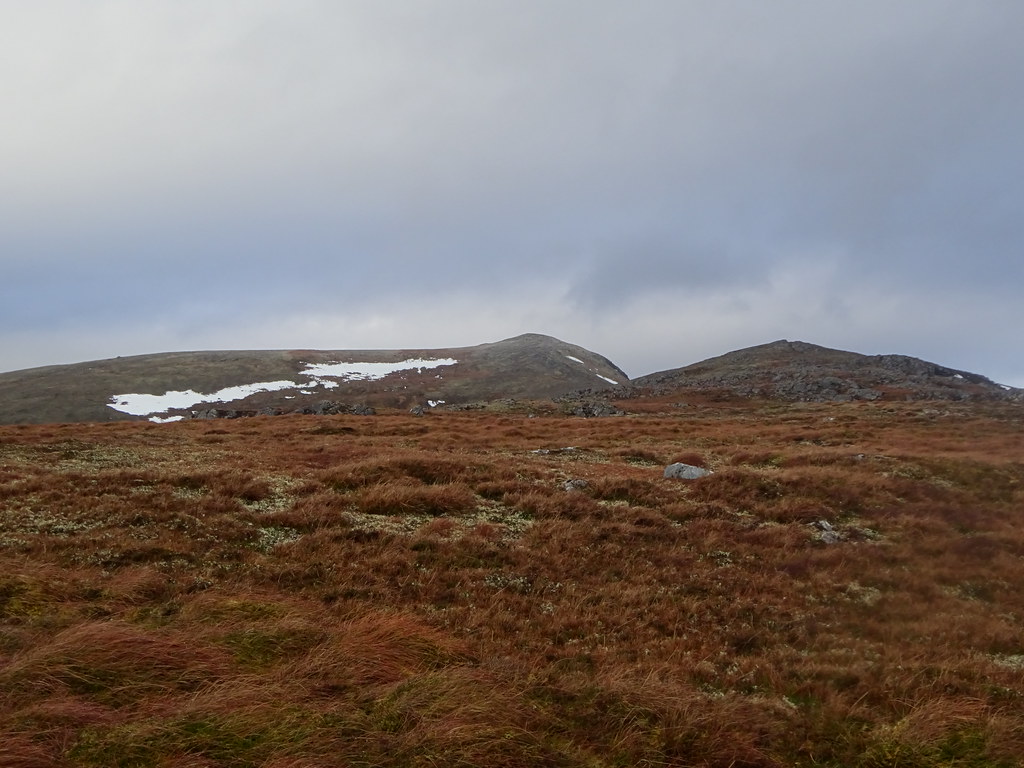 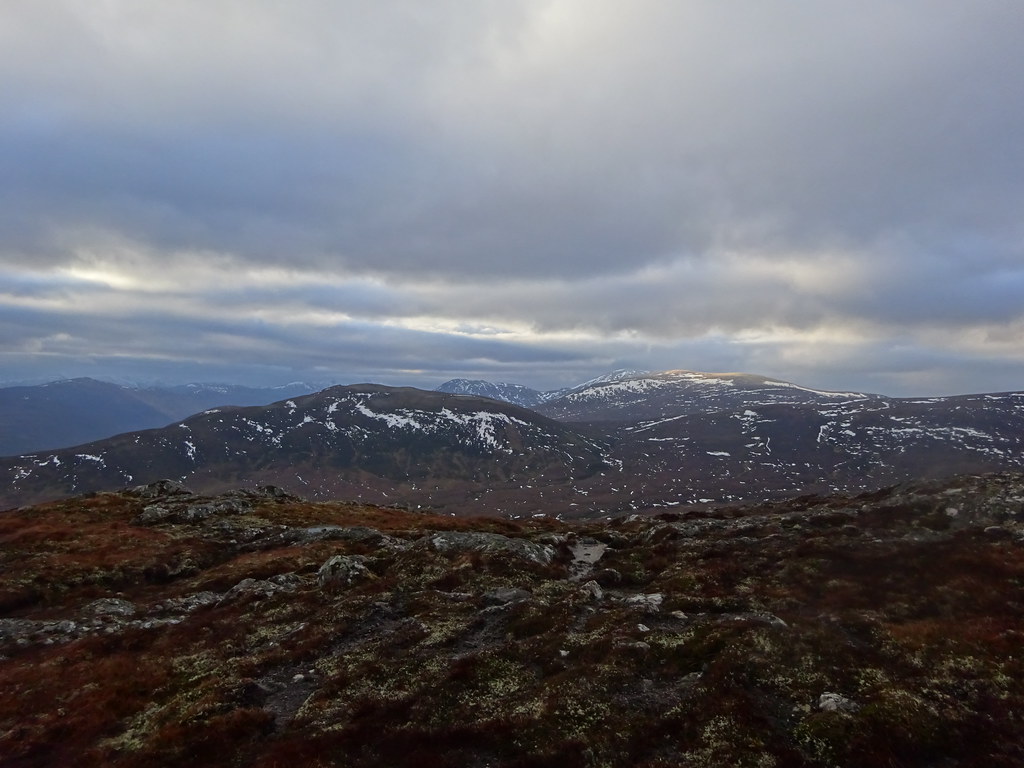 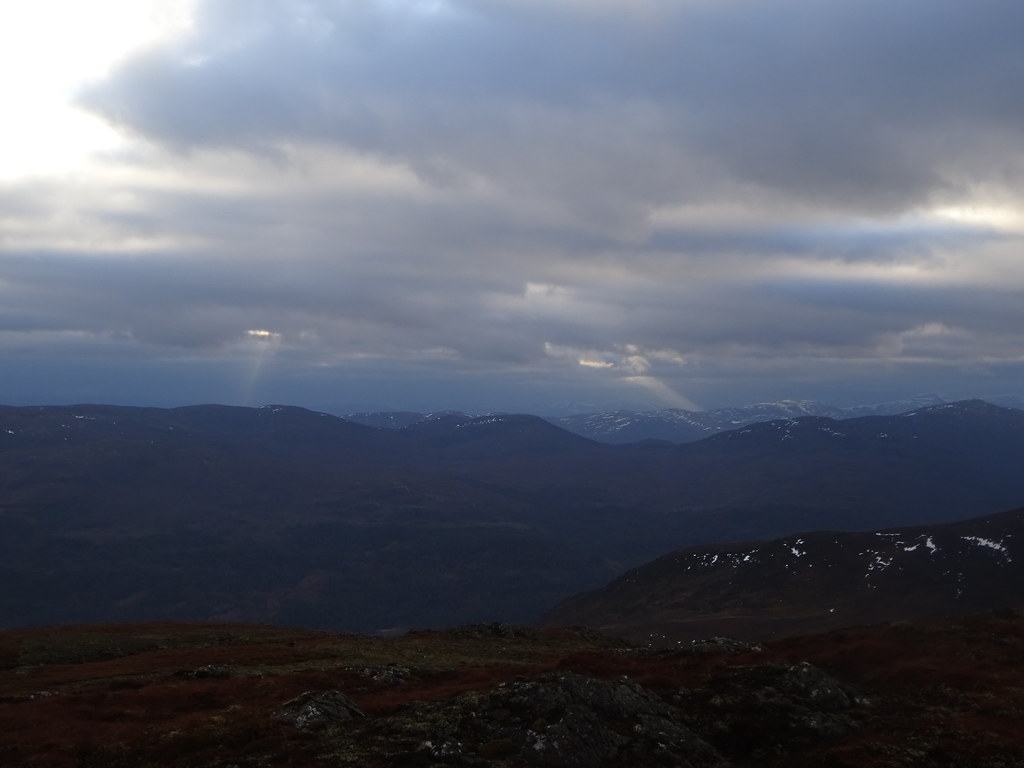 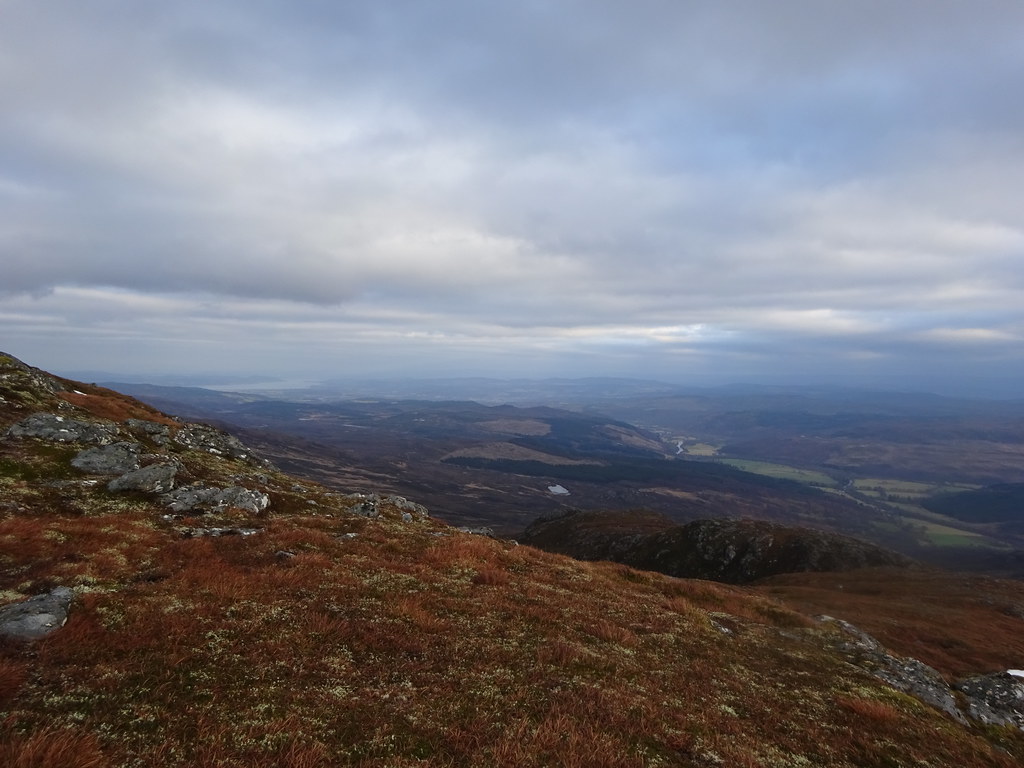 Looking east to Struy and the Beauly Firth 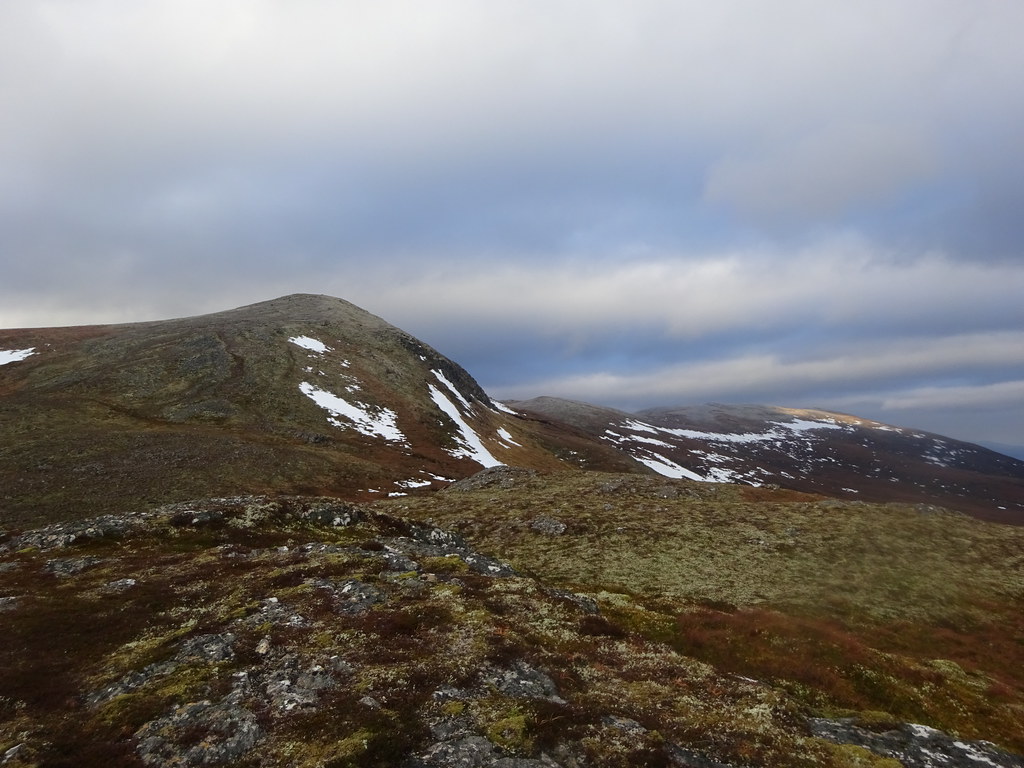 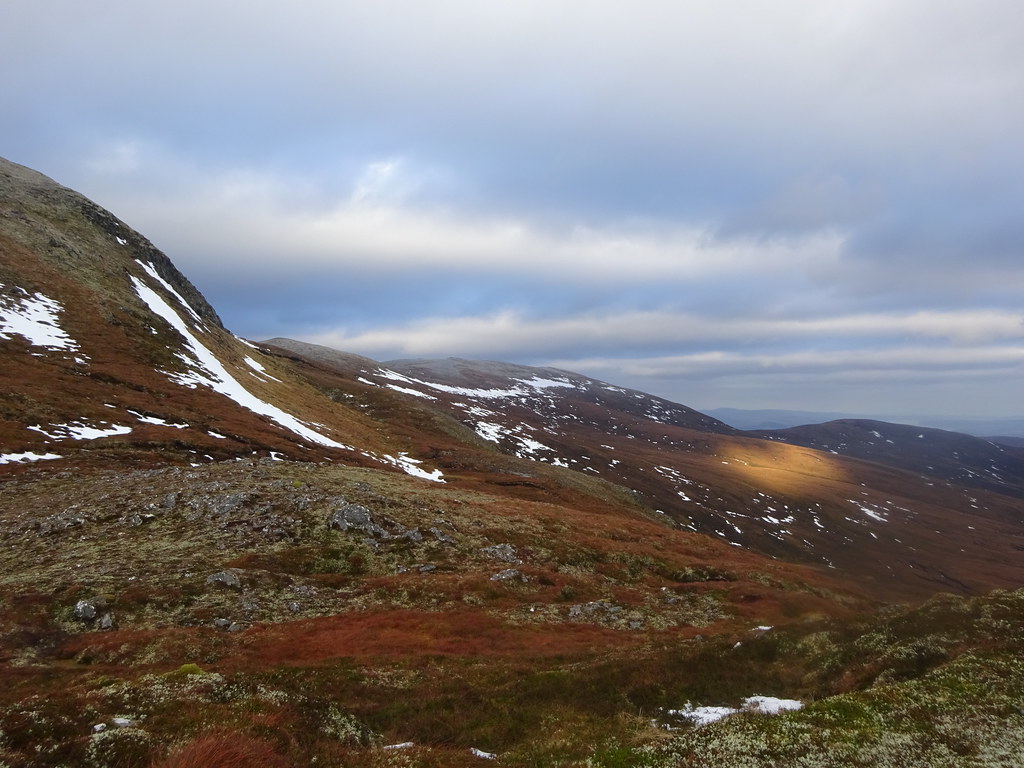 I reached the trig point almost 2 hours to the second after leaving the car. There was the slightest dusting of fresh snow on the top 50m, and a little more breeze than I'd had so far. It wasn't that much though - I could pretty much avoid it entirely by sitting on the other side of the trig point.

I ended up having almost 15 minutes here which was more than I expected to manage. It was pleasant enough - just hovering around freezing and quite sheltered. The weather was quite annoying for photos though - that dull grey light you quite often get at this time of year. It looked as if it might be brighter to the north, and also more miserable to the SE (meaning this was a better choice than Aviemore, which I'd also considered). 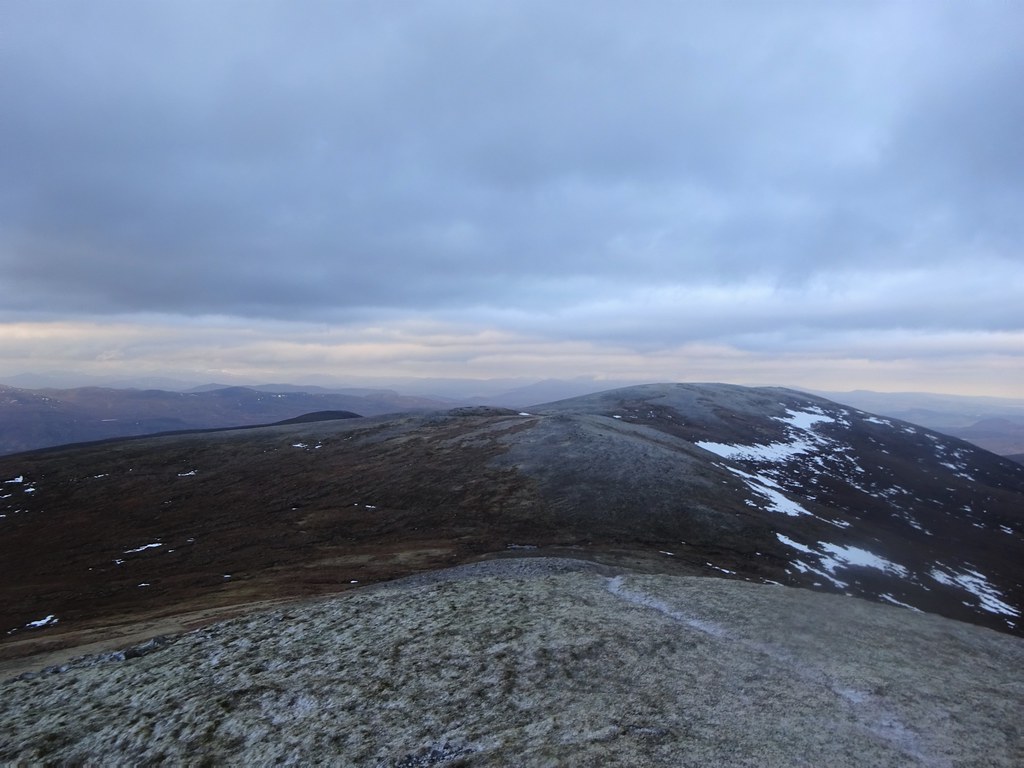 Along the broad summit ridge to Sgurr a Phollain

The walk to Sgurr a' Phollain at the other end of the high ridge is actually a bit of a distance (in fact everything is on this walk as the hill isn't that steep for the most part) but the walking was of the easy, grassy sort. I was now overlooking Loch Orrin where I'd been a couple of weeks earlier. I'm still keen to go up this hill from Loch Orrin, but it's quite a long way so today wasn't the day for it! 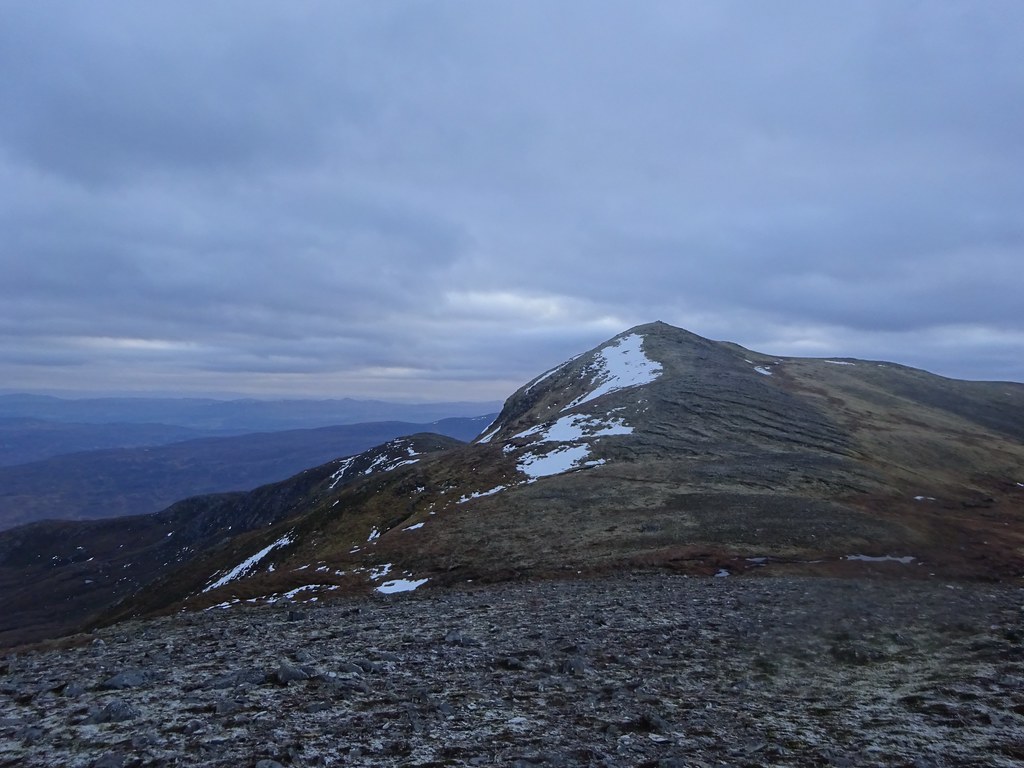 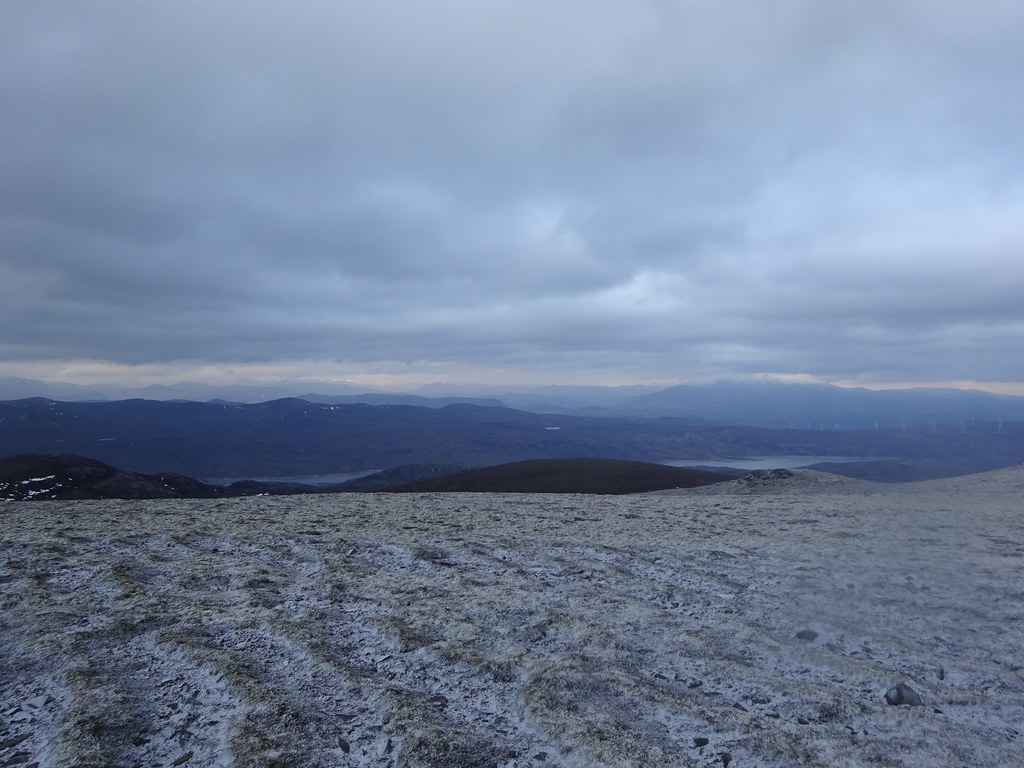 Loch Orrin with Ben Wyvis beyond

On my last visit much of the upper slopes that I decended from Sgurr a' Phollain were under snow, and the time before that it was dark, so I'd never really had a proper look at the stalkers path on this section. It is pretty obvious and well engineered up here (although definitely deteriorating) unlike lower down where it has been largely lost to the heather. 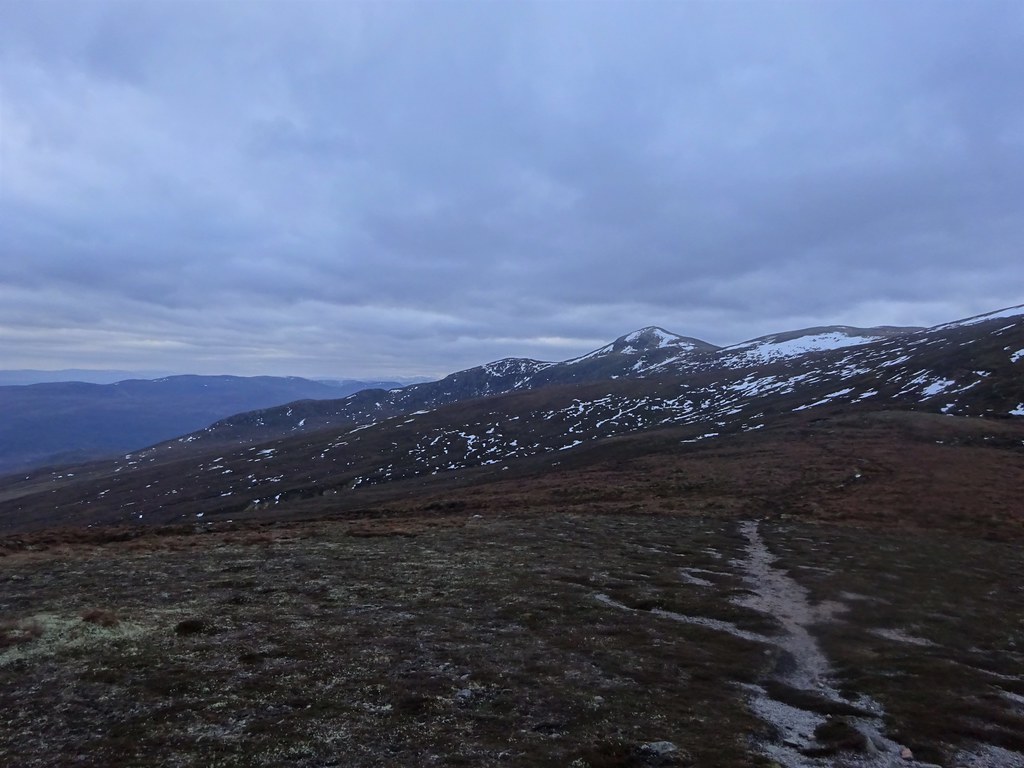 Looking back to Beinn a' Bha'ach Ard from Carn na Ghabhalach

Again I was thrown by the distance. From Carn na Ghabhalach the line of descent was in sight pretty much all the way back to the car, so I thought I'd whizz down it. I was moving at a reasonable rate but the sheer distance meant it took me a good half-hour longer than I estimated. Higher up the route entirely disappears; lower down the engineered line isn't obvious but enough people have been on the route to tread out some kind of path. Despite a forecast of the wind getting up later on, Loch na Beiste was completely still as I passed, with a lovely reflection of the day's summit. 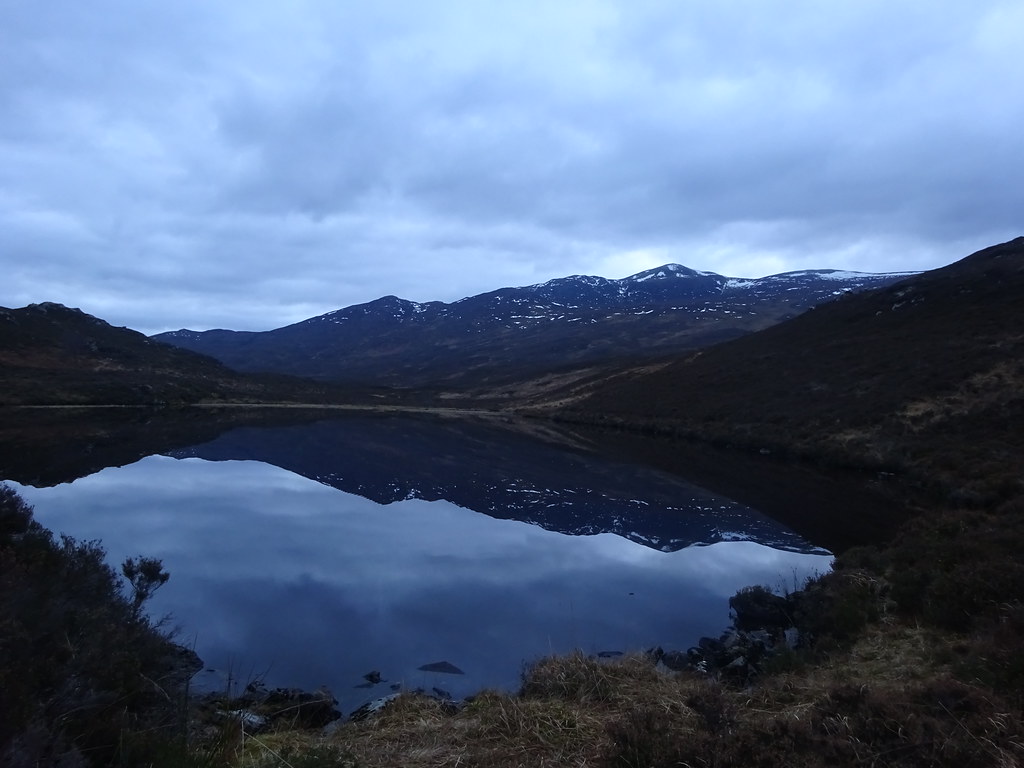 I reached the car to find Jackie had beaten me this time - by about 20 minutes. Still, not bad timing, and a pleasant day out.
Click to mark this as a great report. Register or Login free to be able to rate and comment on reports (as well as access 1:25000 mapping).

Above Inverlael and a sea of clouds