Squelching round the back of Ben Wyvis

A week off work beckoned but things looked like they would be decidedly wet! Monday was the most practical day for going out into the hills, but since everywhere looked grim I decided to stay close to home. It was finally time to get right into the eastern corries of Ben Wyvis - something I've been meaning to do for years. Given the amount of peat hags on the approach from Glen Glass, I decided the best way in would be to climb up to An Cabar on the usual Wyvis path and drop off the other side of the hill. This would give me plenty of ascent too - something that has been lacking from most walks this year.


our_route.gpx Open full screen  NB: Walkhighlands is not responsible for the accuracy of gpx files in users posts
I started early to give myself the best chance of missing the high winds and downpours that were due to move in at luchtime, and was walking shortly after 8am. The going up Allt a; Bhealaich Mhoir was pleasant - no rain yet and some lovely autumn colours. Having destroyed my camera on Fionn Bheinn a couple of weeks ago I now had a rather cheap and nasty new camera to keep me going until I managed to get the other one repaired - fair to say you get what you pay for! 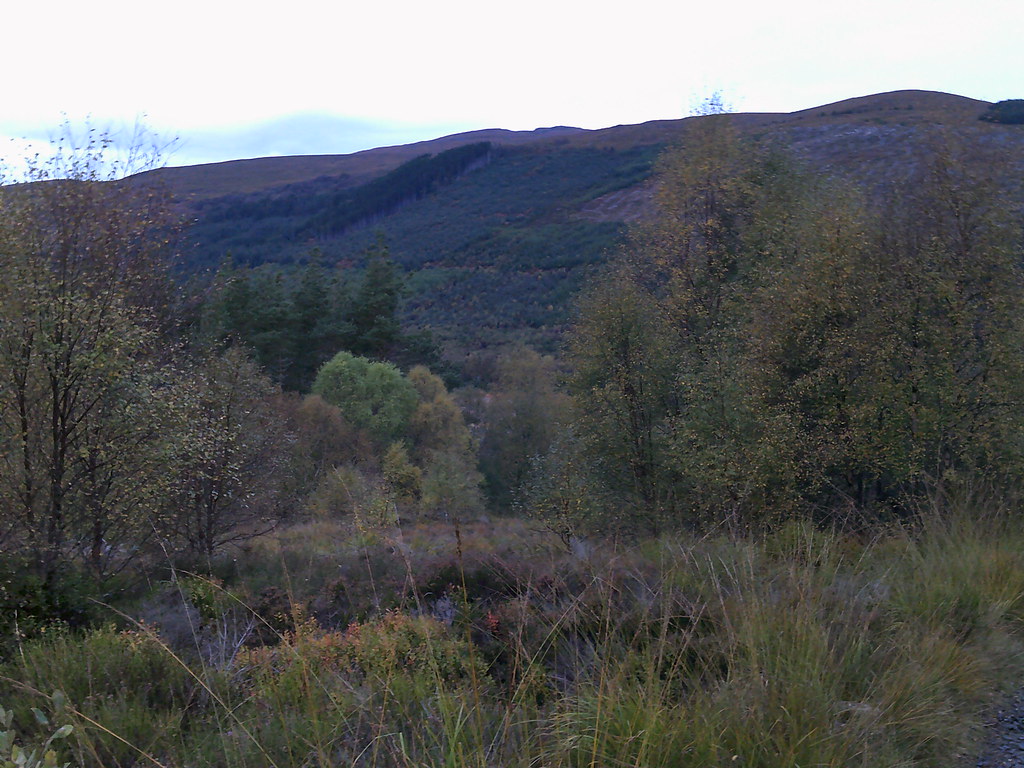 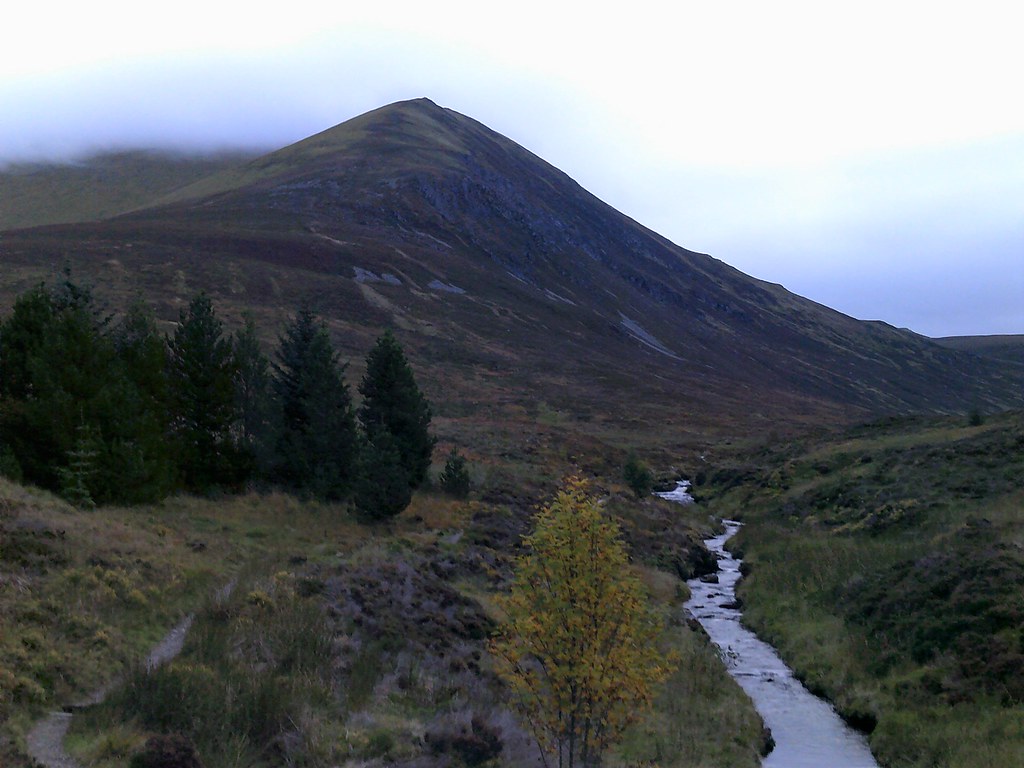 There were good views west with interesting layers of cloud moving around, but halfway up An Cabar it became very windy. The wind was coming from the east but howling around the end of the ridge. I had a feeling it would probably be more sheltered on the plateau and I was right. I was in the cloud here and after following the eroded path towards the summit of Ben Wyvis for 10 minutes, I broke off to the right and descended the grassy south-eastern arm of the hill. 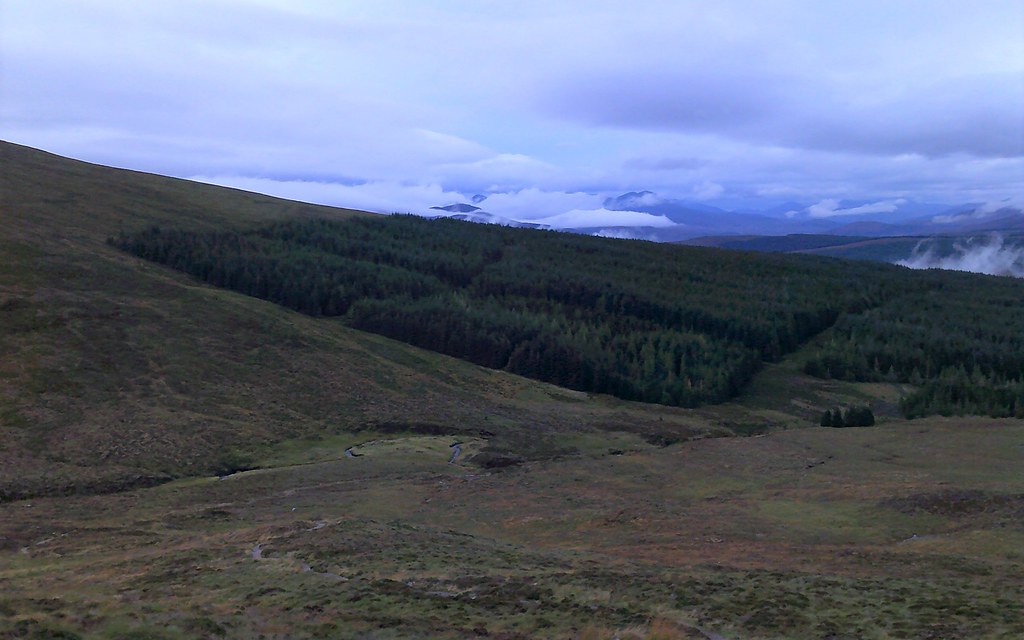 Layers of cloud over the Strathconon hills 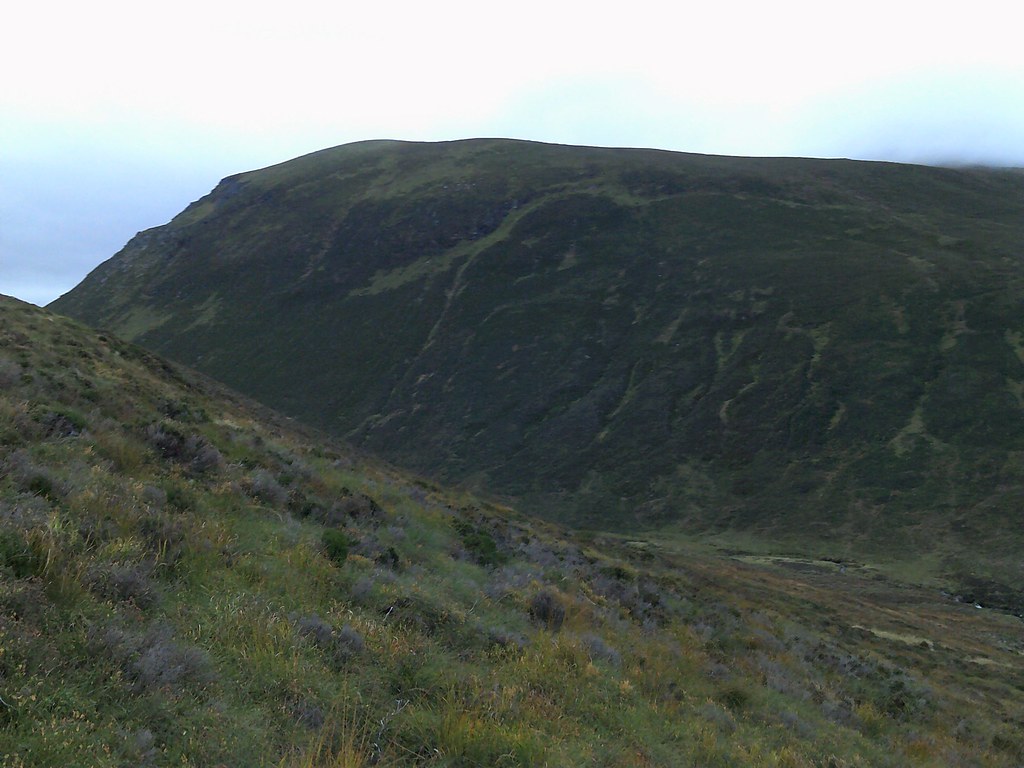 Little Wyvis from An Cabar 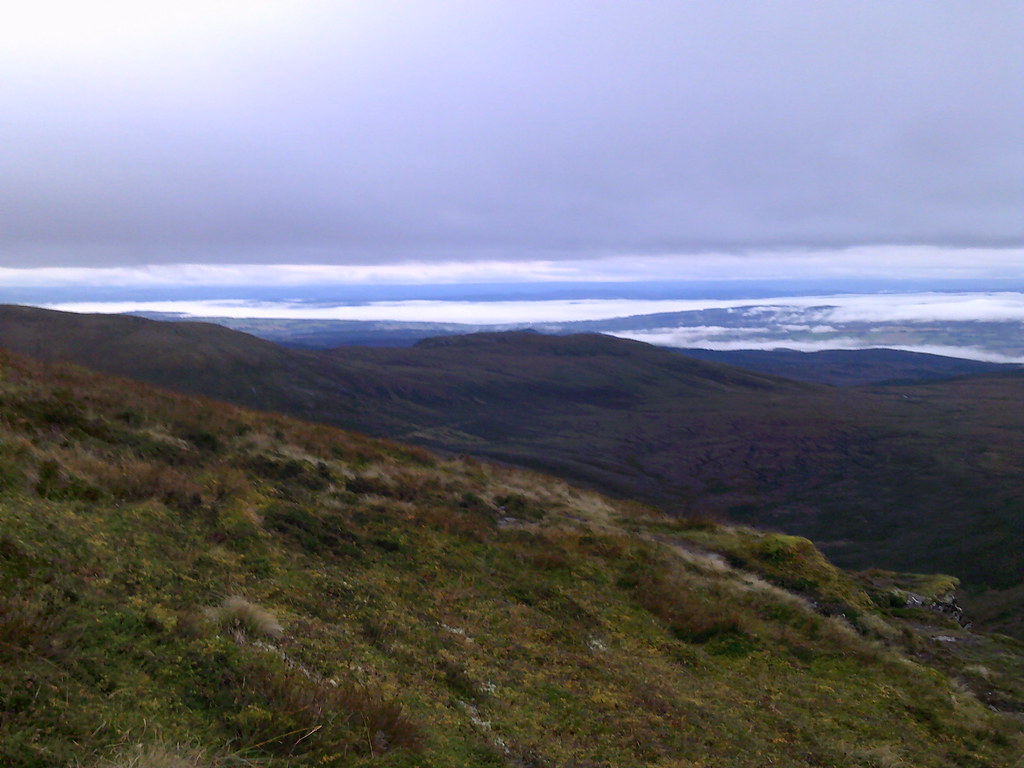 Across the Black Isle

The walking is nice and easy high up on Wyvis and before too long I was out of the cloud again. After descending further towards Meall na Speirig, it was time to drop off the north side of the ridge into Coire na Feola. If I did this in the right place, I would manage to avoid most of the peat hags on the floor of Coire Mor. The going was quite heathery though. Looking back to the ridge I had descended, there was now a stag on the horizon. 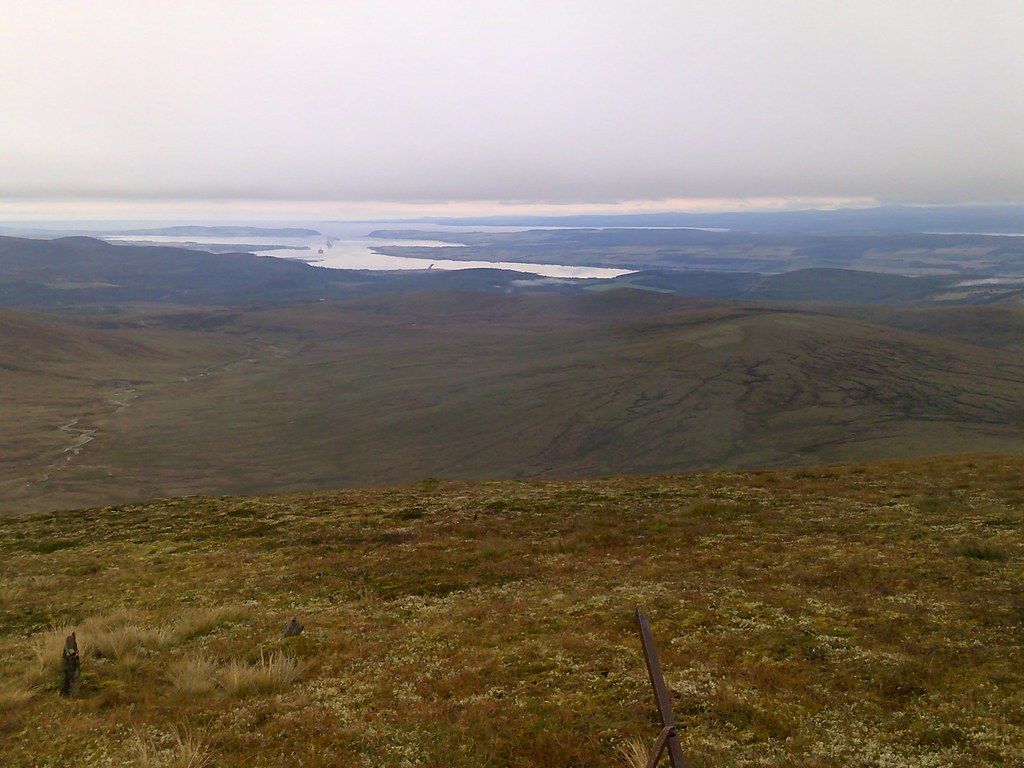 Cromarty Firth from the SE arm of the plateau 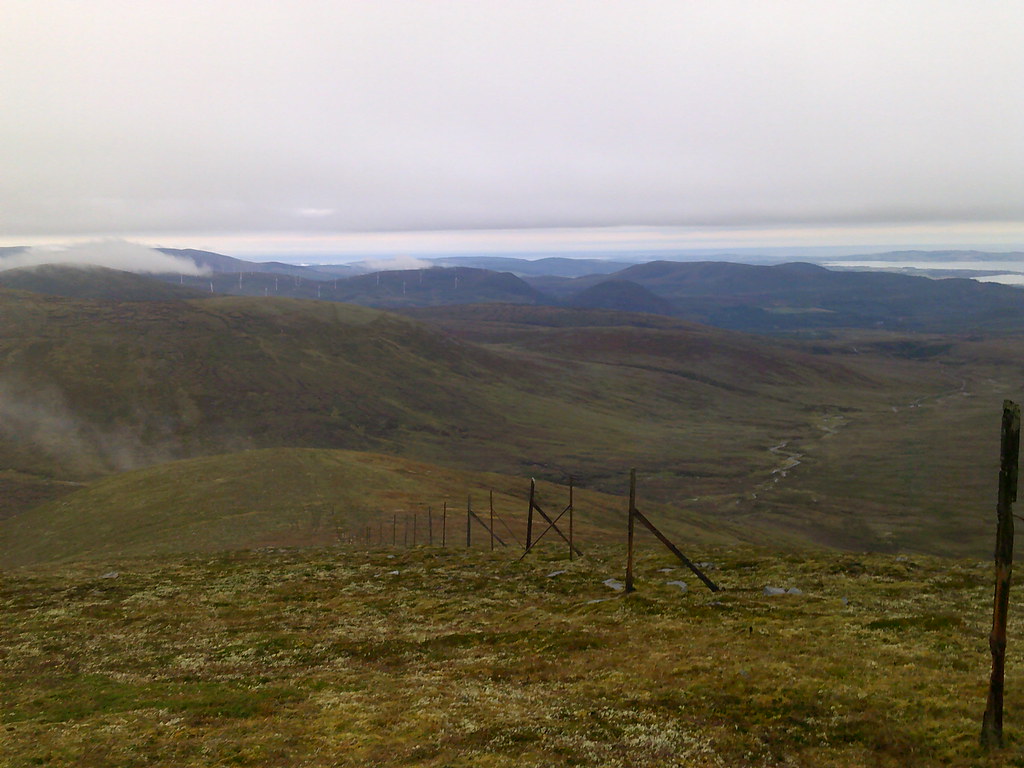 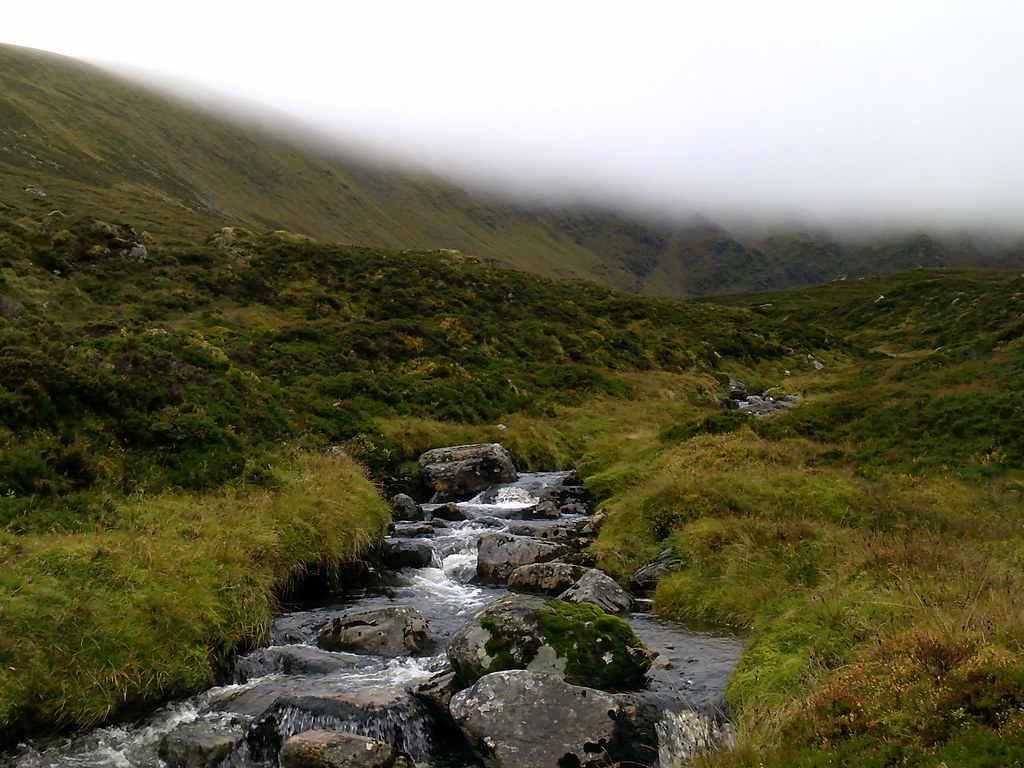 After a little floundering through heather on the north side of Coire na Feola, I reached easier ground at the foot of the eastern crags. These were pretty impressive even on a grey day with the tops of them in the cloud. I caught occasional glimpses of Loch a' Choire Mhoire but it is very hard to get an uninterrupted view of it until you are almost on top of it. A little bit of up and down keeps you to grassier terrain at the foot of the crags but the final descent to the shores of the lochan is unavoidably through large boulders and peat hags. 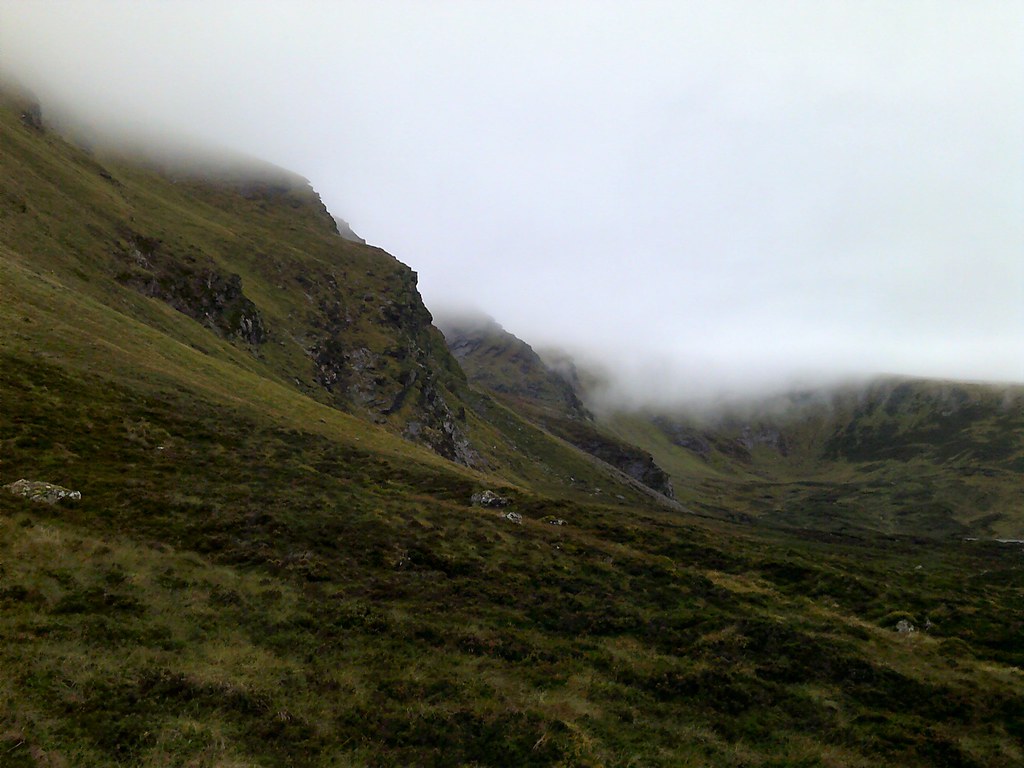 Under the crags of An t-Socach 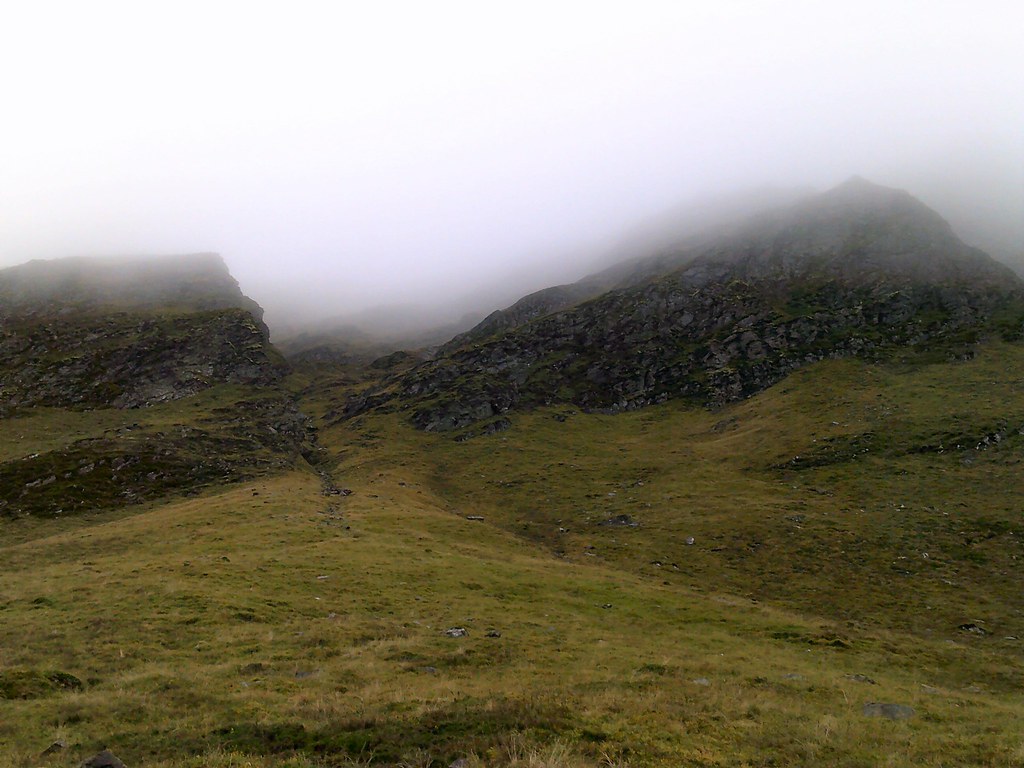 An atmospheric spot with crags and a waterfall dropping straight into the back of the lochan - this meant I would have to go around the front which involved more hags. I stopped briefly for a mid-morning break here although the rain was just beginning, then searched for a way to cross the outlet of the lochan. Initially this looked awkward with a bottomless peaty moat stretching away downstream, but before too long I came across some boulders which made an easy crossing. 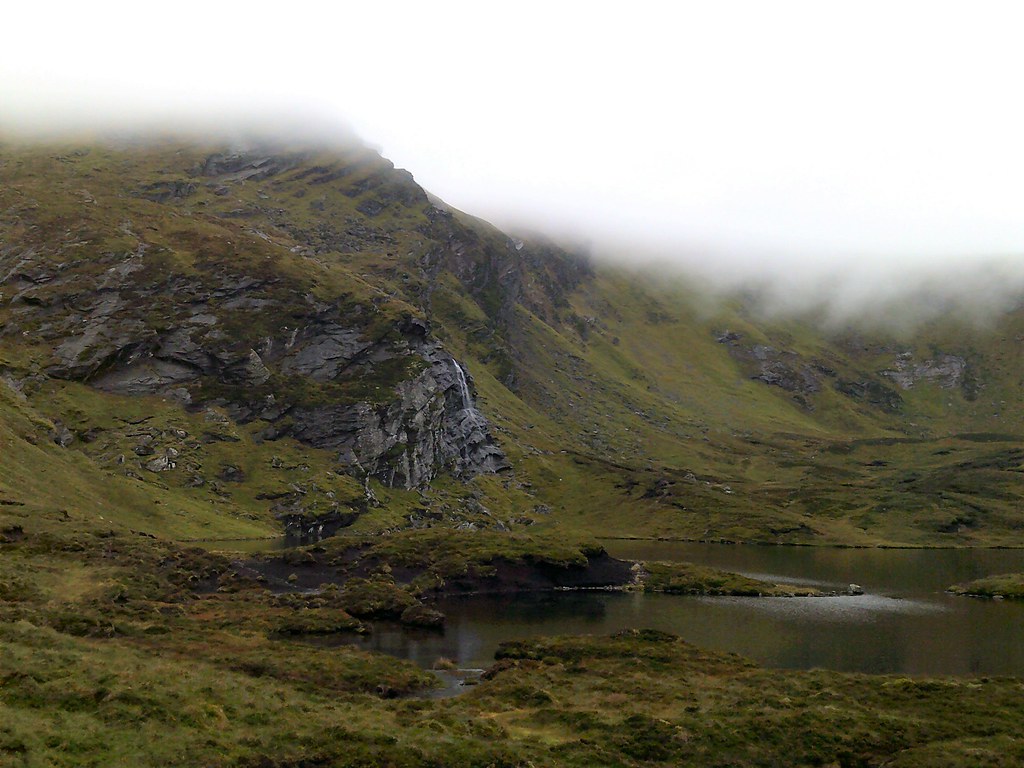 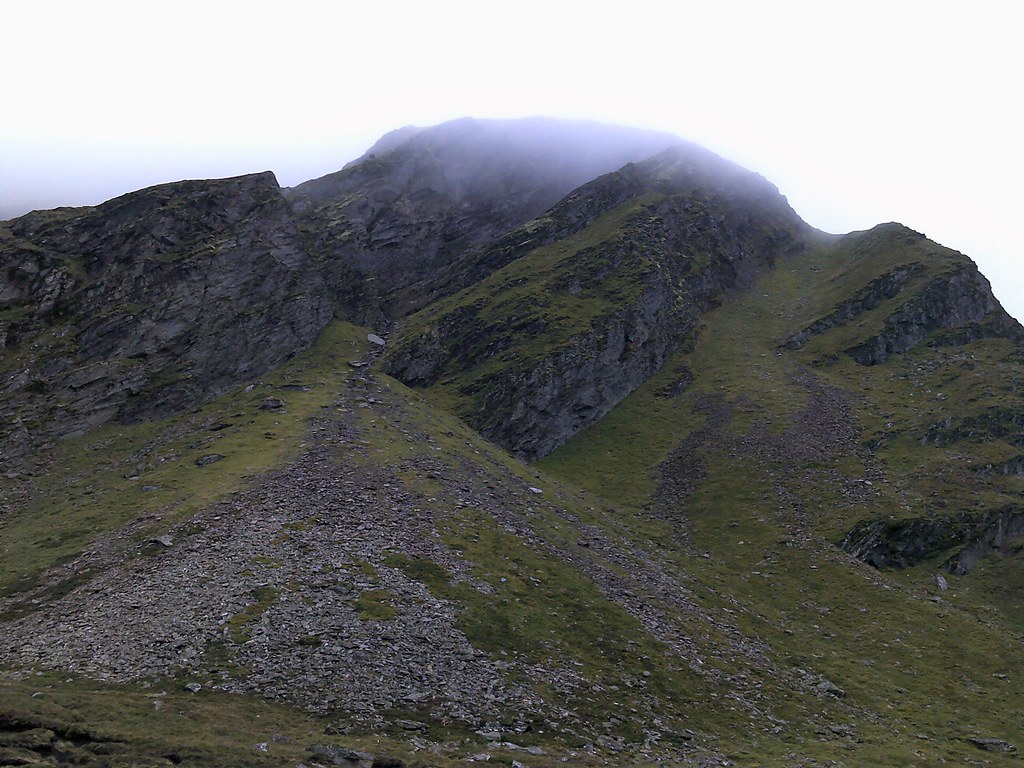 Crags above the loch

The ascent up the back of the corrie was straightforward - definitely a little damp low down, but with a barely visible path developing as I gained height. I was soon on short turf again, and a ridge that would have pretty good views from it if I hadn't been back in the clag again. Tom a' Choinnich has a strange double NE ridge so I crossed over to the more northerly one -this would make navigation to the summit more straightforward. 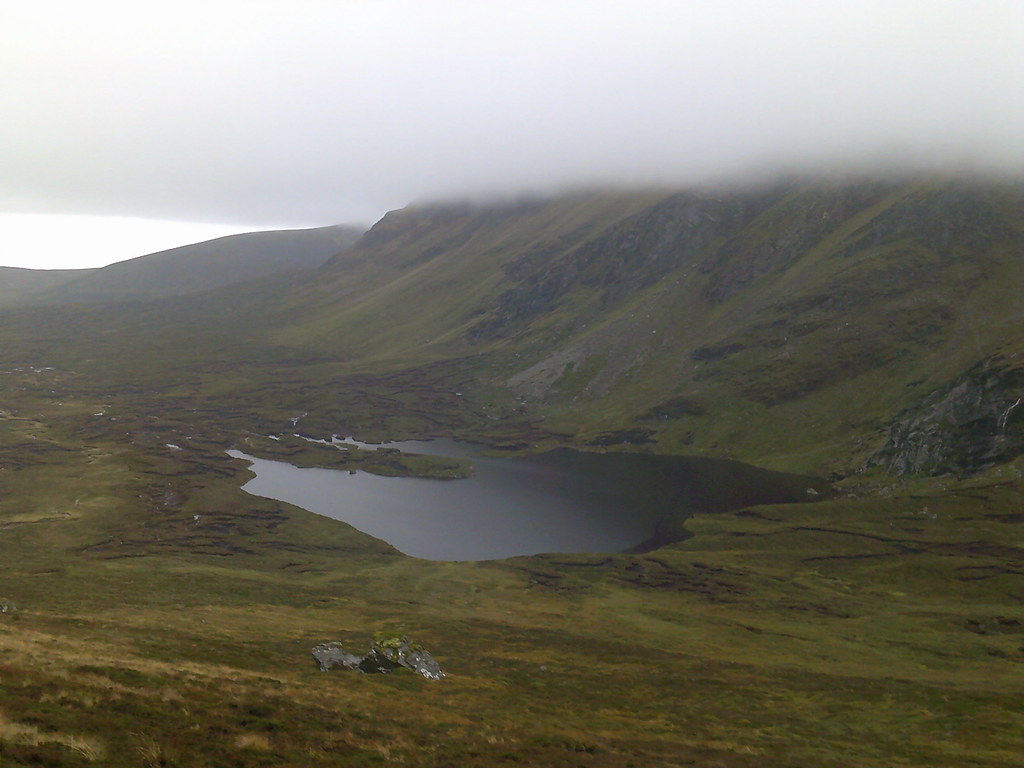 Looking back to Loch a Choire Mhoire

The top of Tom a' Choinnich wasn't exactly pleasant but the wind was bearable here. I followed the faint path towards the main summit of Ben Wyvis, which is easy and mostly involves following old iron fenceposts. A moment or two before I spotted the summit trig point and shelter, the wind shifted up a gear - yuck! 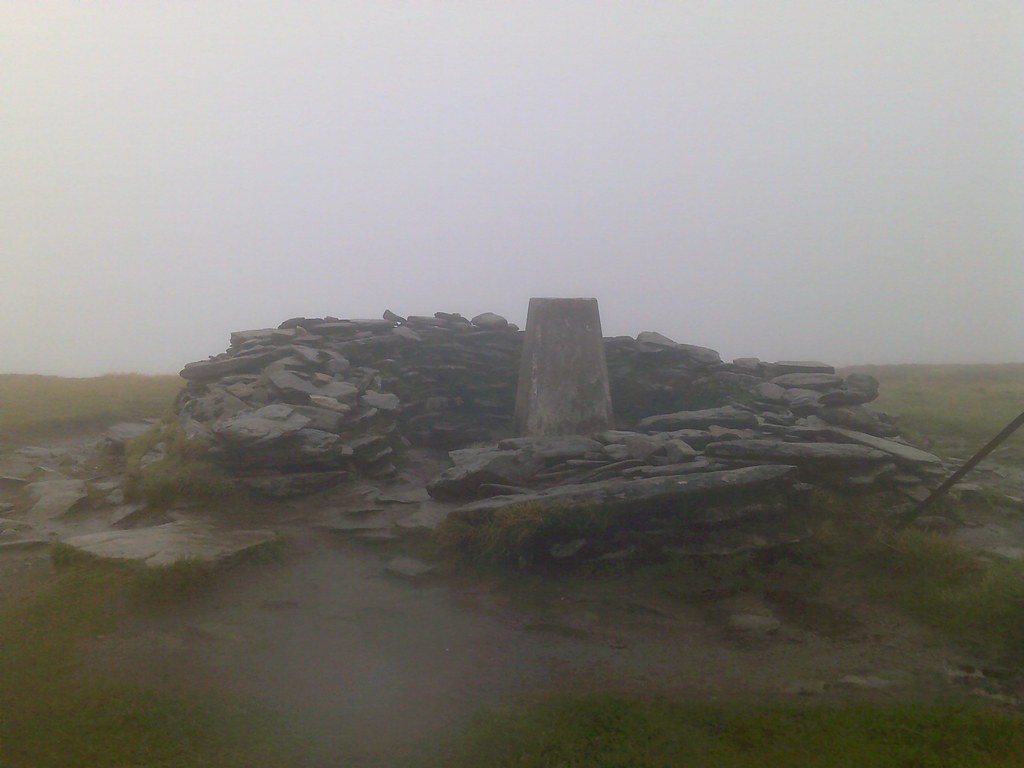 Conditions deteriorating on the summit

The way down was theoretically very simple - follow the motorway back to the car. While the wind wasn't quite picking me off my feet at this point, it was starting to become unpleasant to walk in. A sort of walk-run got me to An Cabar in under 20 minutes, passing another couple of folk on the way up. At least they were almost on the summit (although I couldn't tell them that as talking was just about impossible!).

As on the ascent, the wind was even worse on the ridge down from An Cabar, howling round the corner and making the zigzags awkward to negotiate. I had wanted to be at this point earlier to avoid the stronger gusts but even my 8am start hadn't allowed this. The windspeed was set to increase as the day went on and I was glad to be off the worst of it after another 10 minutes or so. I passed another couple of folk on their way up who shouted my name - Lee and John. I hadn't recognised them in their full goretex, hoods and hats. Bit of a theme for Wyvis - last time up I had failed to recognise at least 3 people I knew

. They were hoping to make a quick ascent on the way up to Ullapool for a few days. I heard later that they had turned back before An Cabar - good move as it would have been even worse up there than I had experienced 30 minutes earlier!

I pushed on for the car - it was only wet now rather than windy. Another time when I should have put my waterproof trousers on. Instead, I jumped in the car in my soaking gear and drove straight home - second time in a fortnight that has happened! At least there were some interesting bits earlier on.
Click to mark this as a great report. Register or Login free to be able to rate and comment on reports (as well as access 1:25000 mapping).

A couple of quickies: Side Pike and Silver How

Red Screes to Fairfield, then Langdale via Loughrigg Terrace