We hadn't gone over to Torridon for the weekend for the meet in the end. We weren't going to stay at the hostel, the weather was looking ropey for camping and Jackie wasn't really up to doing much. So on Sunday I was itching to go somewhere. David had been at Torridon youth hostel and was heading home via Fionn Bheinn so I decided to join him. The weather forecast was OK until lunchtime, after which it looked like we'd get wet - oh well, it would be exercise at least!


our_route.gpx Open full screen  NB: Walkhighlands is not responsible for the accuracy of gpx files in users posts
I met David in the parking area outside the station and we were on the move before 11am. Not really the earliest of starts given the weather later on, but neither of us could be bothered to do any earlier. At this point the weather still looked quite nice so we enjoyed our wander up the eastern bank of the Allt Achadh na Sine knowing it would be nastier on the way down. We had initially intended to go up the new hydro track on the other side of the burn but there was a high locked gate at the bottom and neither of us could be bothered climbing it. 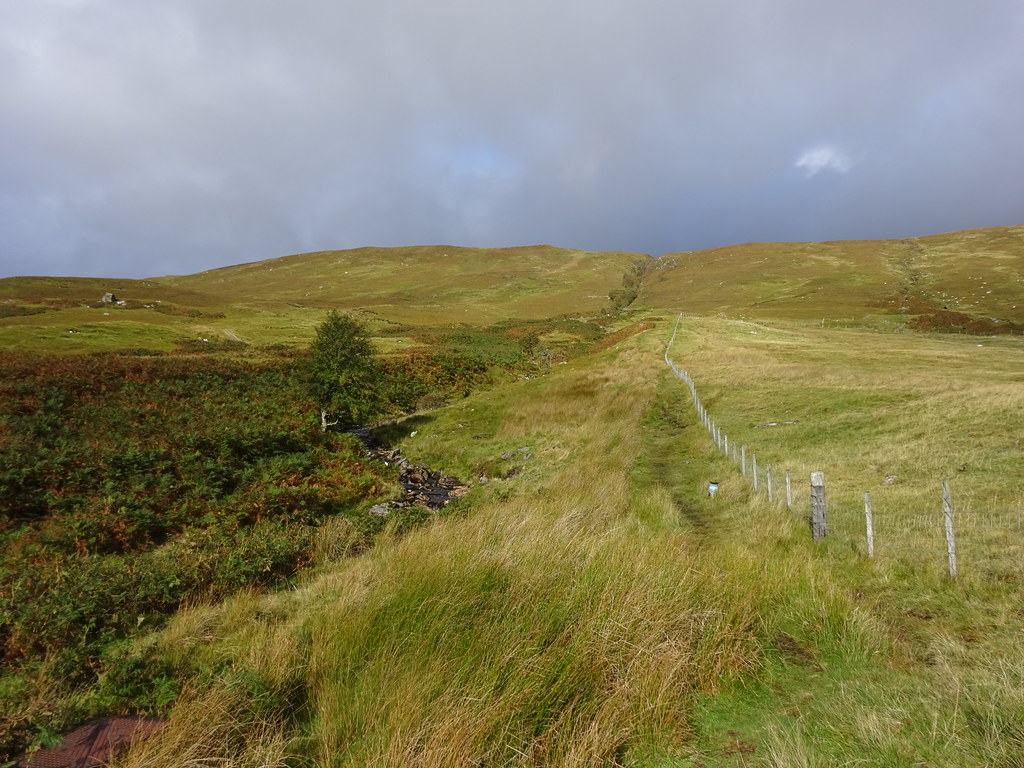 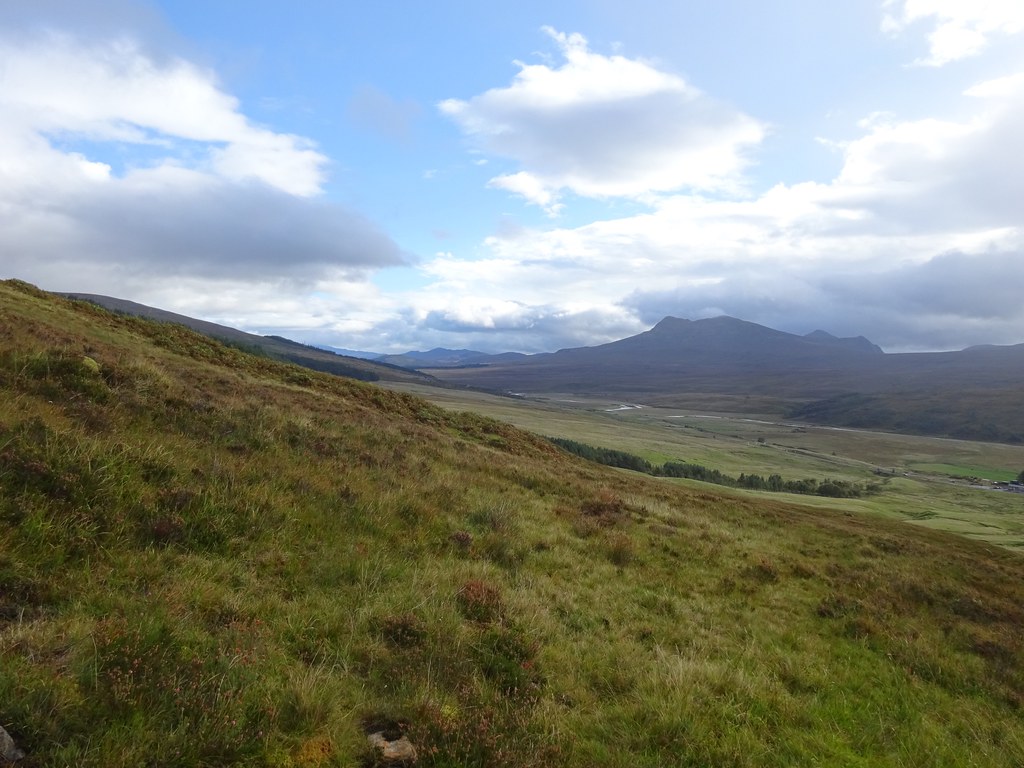 Strath Bran and Sgurr a Mhuilinn 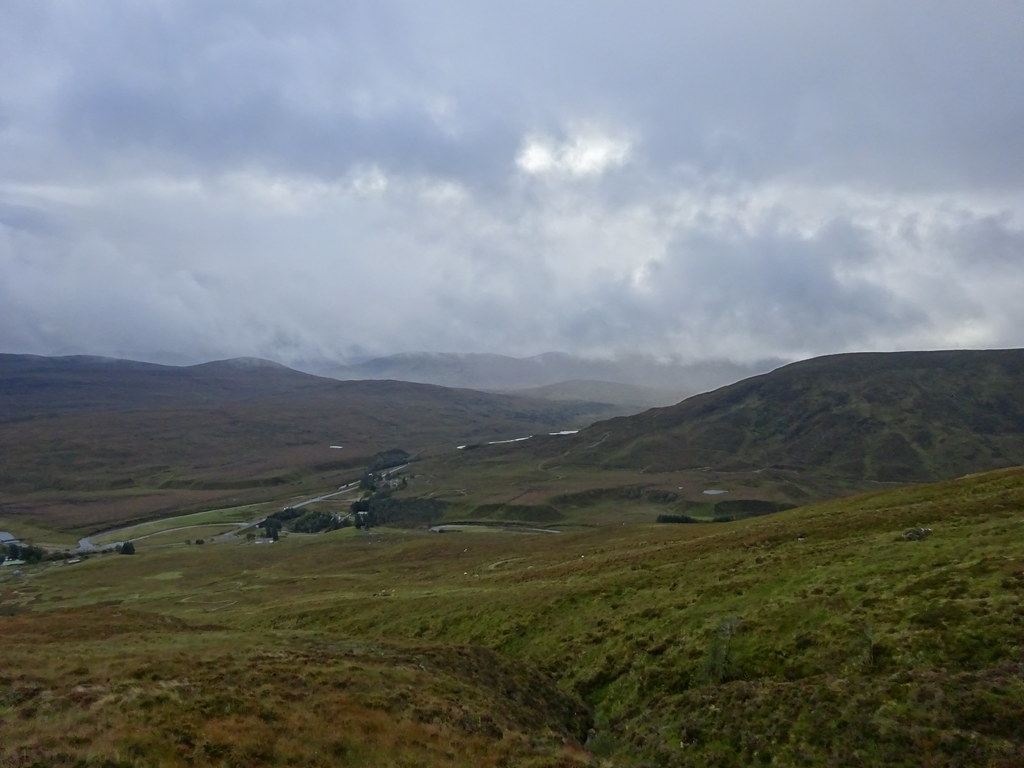 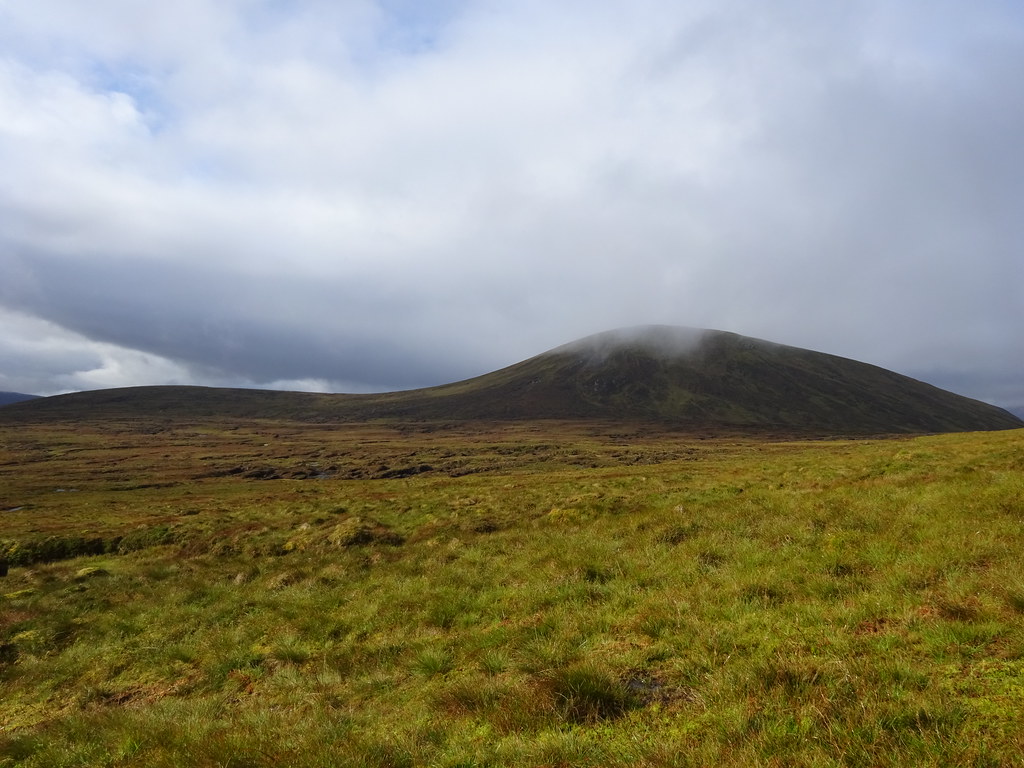 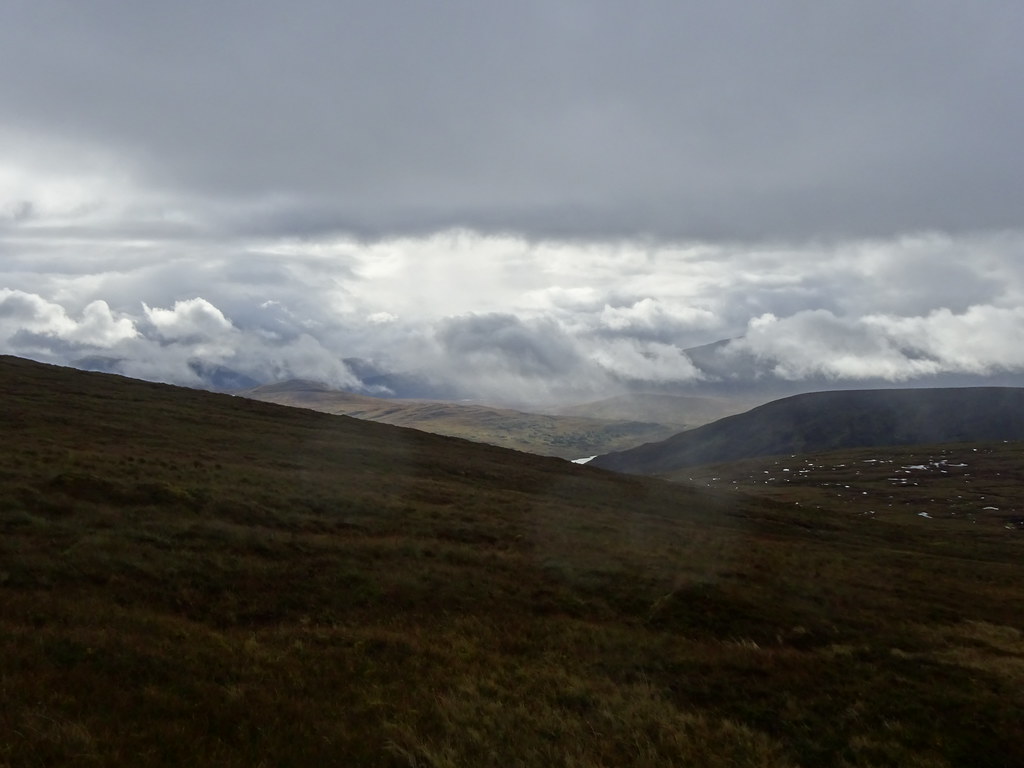 A sliver of Loch a Chroisg

At the peat hags, the path becomes much less obvious although there were definitely more footprints to follow than on previous visits. After a little sunshine on adjacent slopes, we were in the cloud. 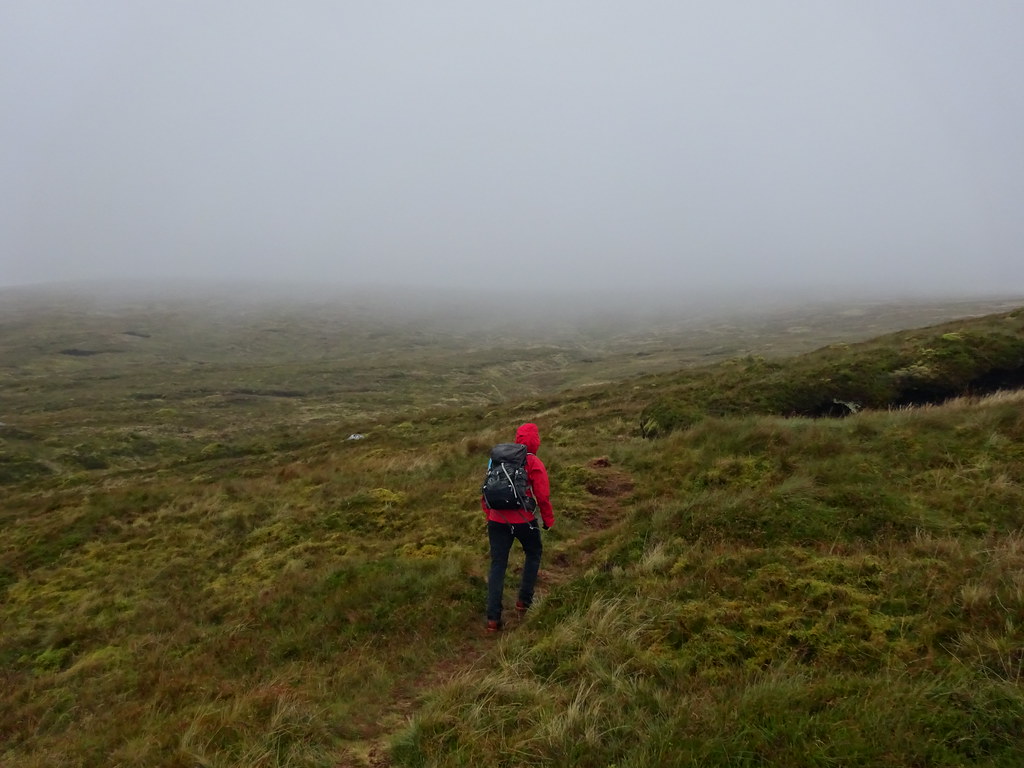 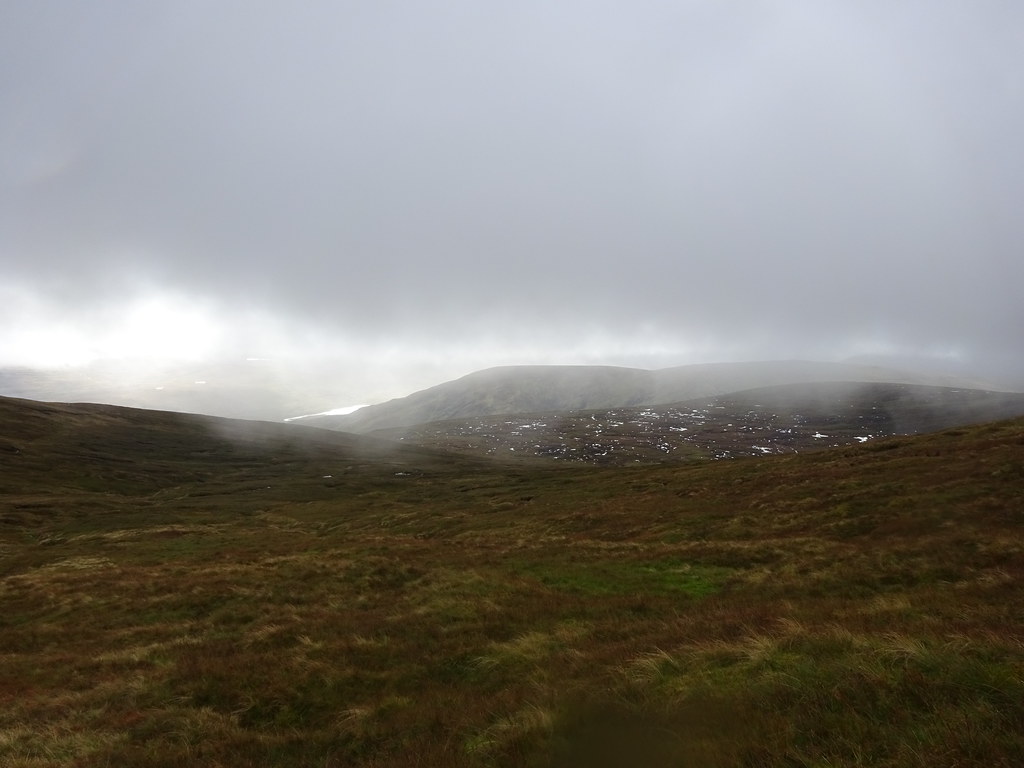 The peaty bit we would be crossing on the way down 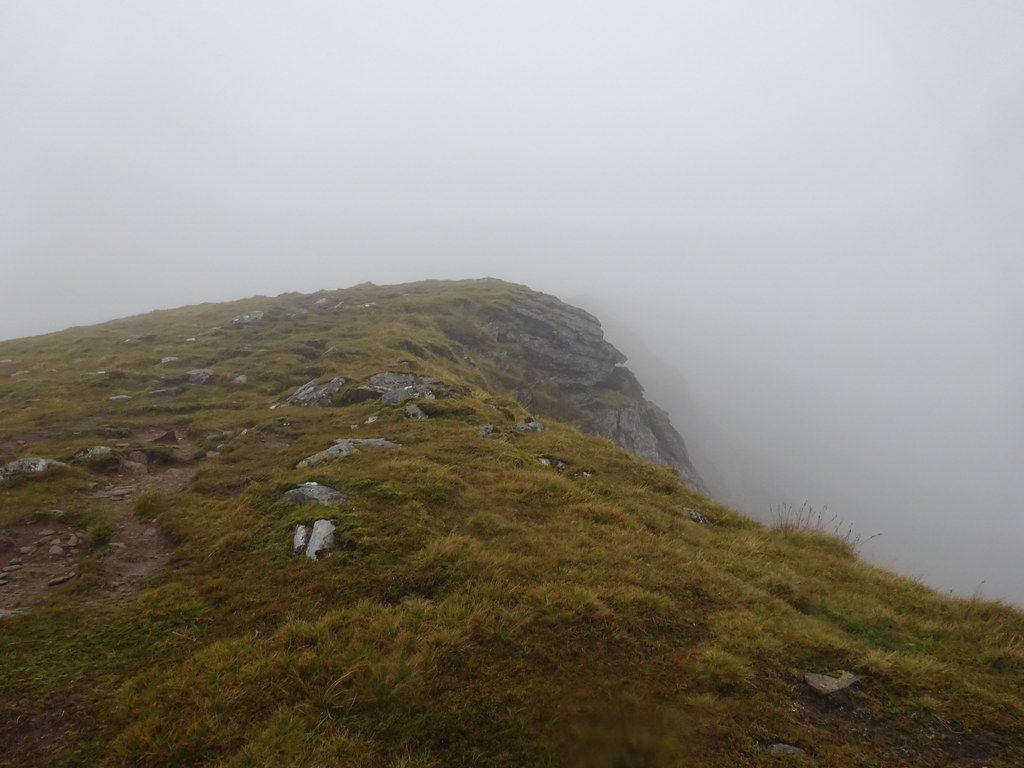 By the summit the rain had started but it wasn't yet awful. We'd been discussing adding on Meall a' Chaorainn to make more of a day of it - you would have though this weather would have put us off but David's burning desire for another Marilyn and mine for a bit more ascent meant we plunged off the west side of the summit on a compass bearing instead of retracing our steps. We had a quick stop for food halfway down here just as we popped out of the clouds, and the rain had become heavier. 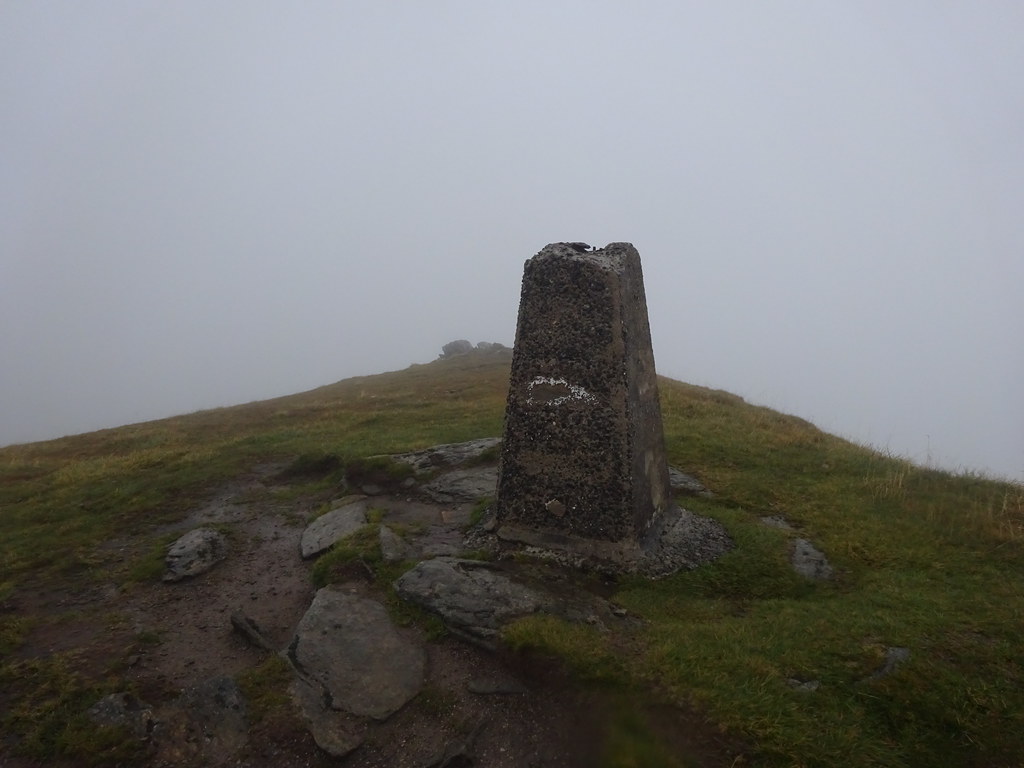 There are a few peat hags to negotiate between these two hills but by dropping to the north of the high point on the col we avoided most of them. Then it was straight up the other side again - this became steep and David was reminded he had a slight hangover... 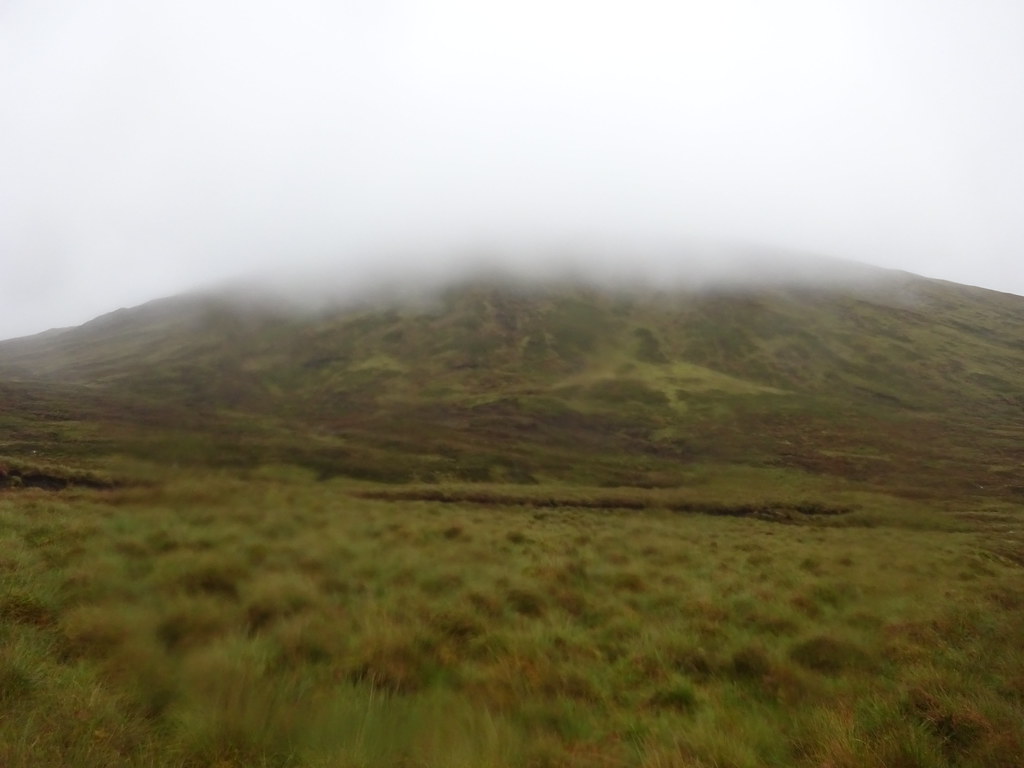 Heading for Meall a Chaorainn

No hanging around on the summit - another bearing led us off the highest ground and down to the edge of the peat hag gauntlet. We were back out of the cloud again and I remembered a faint quad bike track that had helped Jackie and I negotiate these on the way back last year. This didn't keep us dry but it did give us a route to follow that required little thought.

David had originally been impressed that I only had one damp foot 30 minutes ago but without us really noticing, the rain had really intensified and both of my feet were now squelching. We ended up on the hydro track which meant that despite our efforts on the way up, we ended up having to climb the high gate. At this point we didn't really care though! We had considered a leisurely cup of tea before hitting the road but in the end I jumped straight into the car and drove off without even bothering to remove any wet clothes...yuck

A couple of quickies: Side Pike and Silver How

Red Screes to Fairfield, then Langdale via Loughrigg Terrace

One for the masochist: Torr Achilty again