A beautiful windy but sunny day on Harris, so Hamish, Winnie (our Scottie) and I headed off for this short but vicious circuit. We parked at the Huisnish road junction and headed up the extremely steep but safe grass and heather slope to the south up Gillaval Dubh. From sea level to 420m in less than 750m distance on the map - some climb. 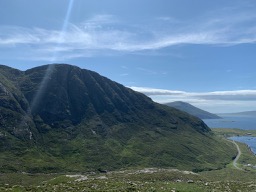 looking from Sgoath Iosal towards the start of the walk

After the big haul up and Winnie off chasing a mountain hare - the hare won - something about her short legs - we made the first main top Giolabhal Glas at 475m. Stunning views all around. 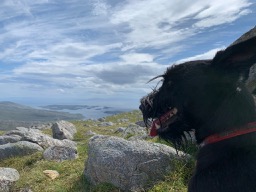 Winnie marvelling at the views, or perhaps trying to spot a mountain hare

We continued just north of east along the undulating, rocky ridge down into the steep gap before Beinn na Teanga, disturbing out first herd of deer for the day. Tracked above the steep cliffs to the Bealach Garbh. Views across the valley to the day's high point Sgoath Aird were impressive. The Clisham massif looming just to the north west. 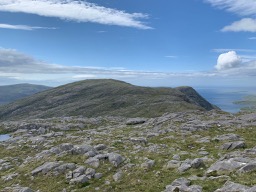 looking west back over the first part of the horseshoe 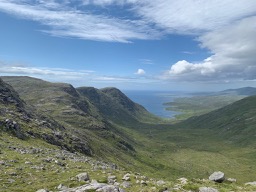 view west down the valley from the Bealach Garbh

The going gets much easier on the north side of the horseshoe. Underfoot the terrain switches from rock, boulders and typical Harris chaos to gentle grass slopes up to the main top - Sgoath Aird. 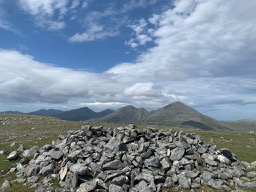 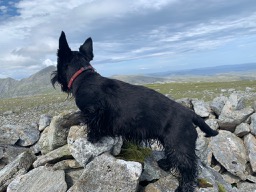 The views from which were stunning, to the north Beinn Mor in remote Pairc, climbed earlier in the week, to the north west the impressive North Harris hills, to the south west beautiful Beinn Dubh, our local mountain, and the exquisite beaches of West Harris, to the east, Loch Tarbert and in the distance the mainland mountain ranges for as far as the eye can see.

North, towards remote Pairc on Lewis with Beinn Mor in the foreground 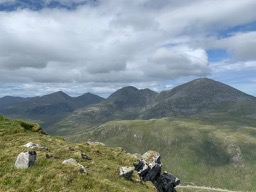 We then headed due West towards Sgoath Iosal, the finer of the two tops on the north side of the valley. The view from the top was breathtaking. 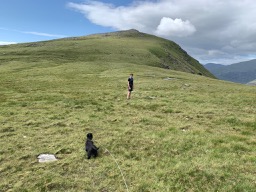 The descent was steep but sound. Heading down to a gentle shoulder, you have two choices, bear left into the valley and curve down and towards the car and road junction. You will loose height fast and the going is steep but sound. An alternative is to keep heading towards the end of the shoulder and make your way down steep, but secure ground to the road.
All in all another epic day in the Harris hills.
Click to mark this as a great report. Register or Login free to be able to rate and comment on reports (as well as access 1:25000 mapping).


Now that's what I call a beach walk