A little foray into the Eastern Howgills

Our days out in the Howgills have been an escape from the better known parts of the Lakes and Dales, they've given us the opportunity to explore off the beaten track and find a bit of solitude, almost pioneering in some places

well, that's how it felt

We decided to visit the Eastern side of the fells today, a seed planted by johnkaysleftleg.

I wanted to visit Harter Fell, Knott and Kensgriff mainly, so, I had a look at the map and cobbled together a route that included these two and some more unvisited tops.

We set off early-ish from home to make sure we could find a parking spot without too much bother on the very narrow road that takes you towards Adamthwaite from Ravenstonedale, we found a little parking area at around NY715009, enough for four sensibly parked cars, it was empty so we tucked the car in well over to the side and got ourselves ready for the off.

Wandale Hill from the parking spot 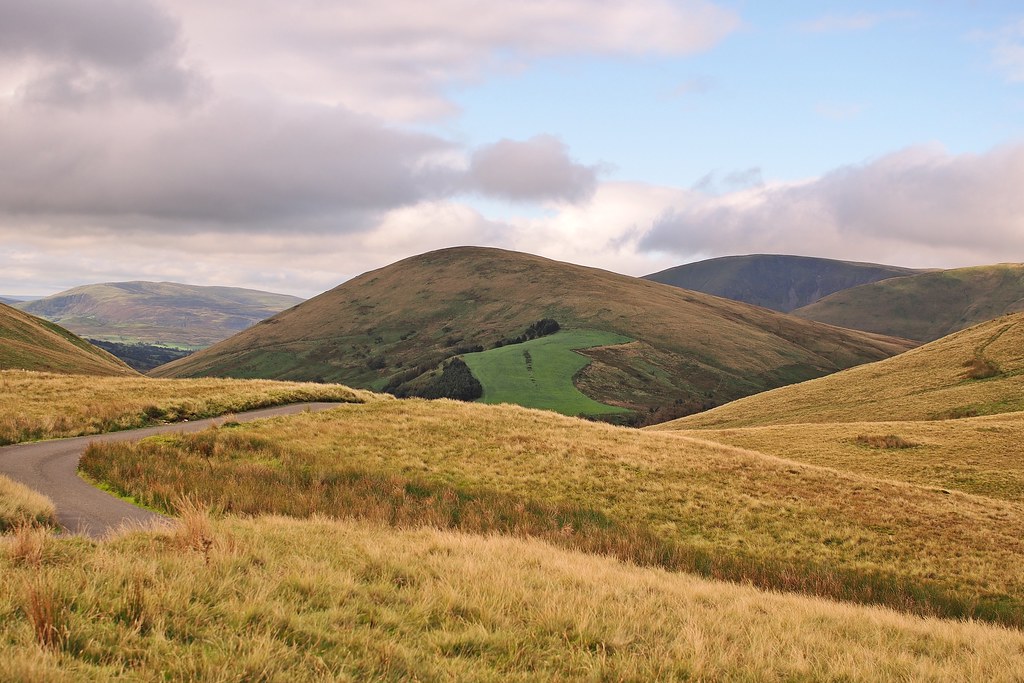 Harter Fell was the first objective and the path/quadbike trail up the hill starts opposite the parking spot, easy enough 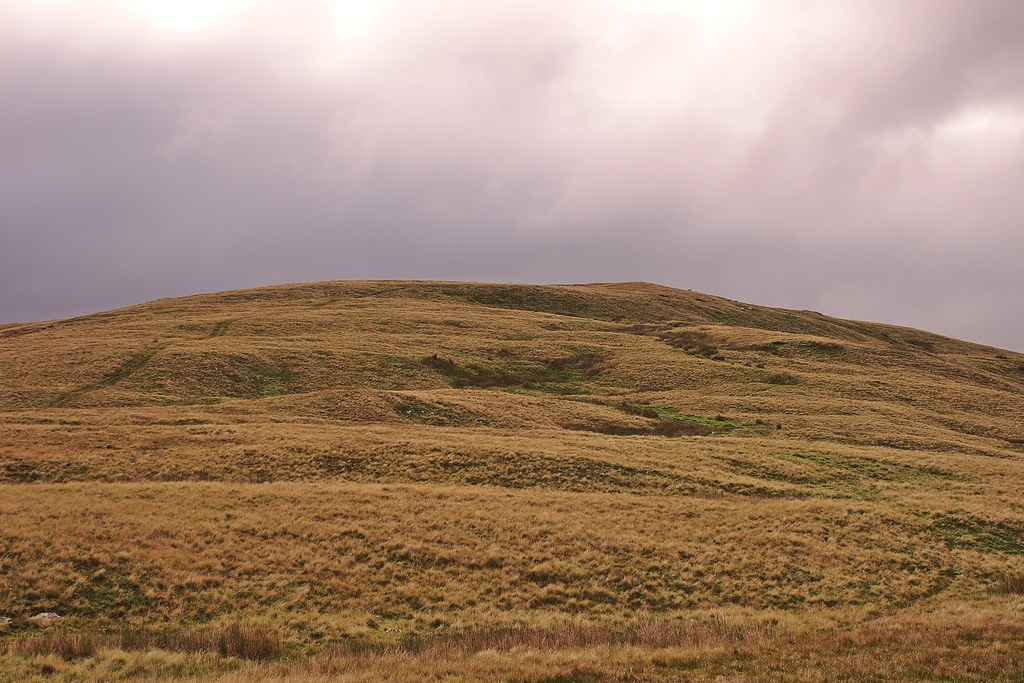 Gais Gill from the parking spot 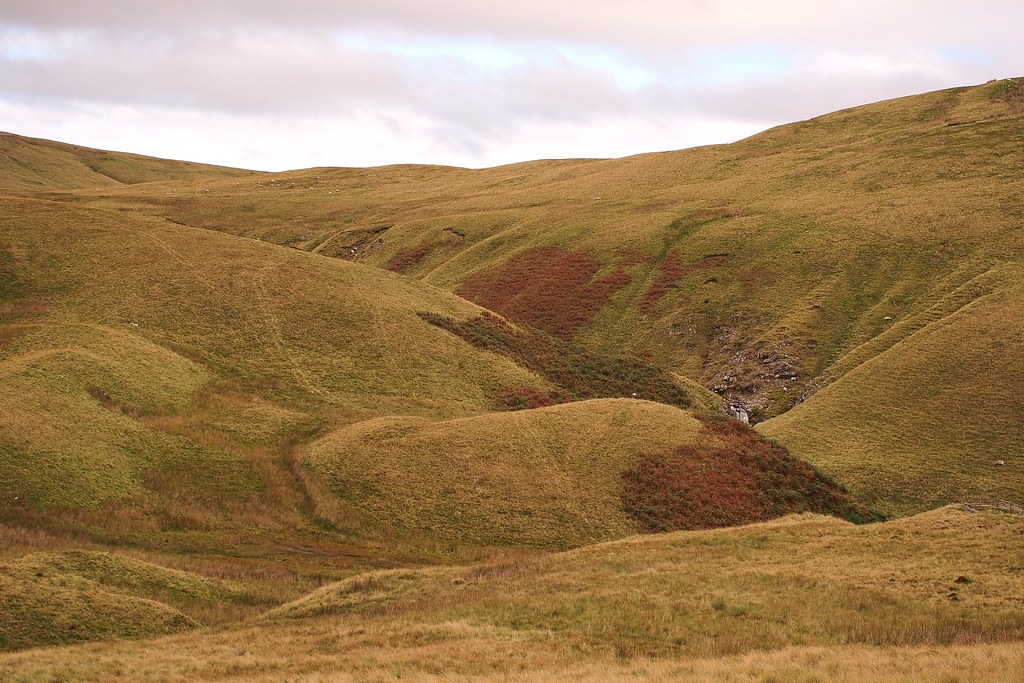 The weather was a bit grey, there were clouds covering the tops further East, Wild Boar Fell was completely covered

the Howgills were unaffected by cloud cover, in fact, it was looking better over to the west

Our little parking spot was at around 413m so the walk up Harter Fell was only about a 120m climb on a very steady gradient, it took just 20mins from car to summit. On the summit the views over to the main Howgills were good,
Wild Boar Fell was still hanging on to its cloud. 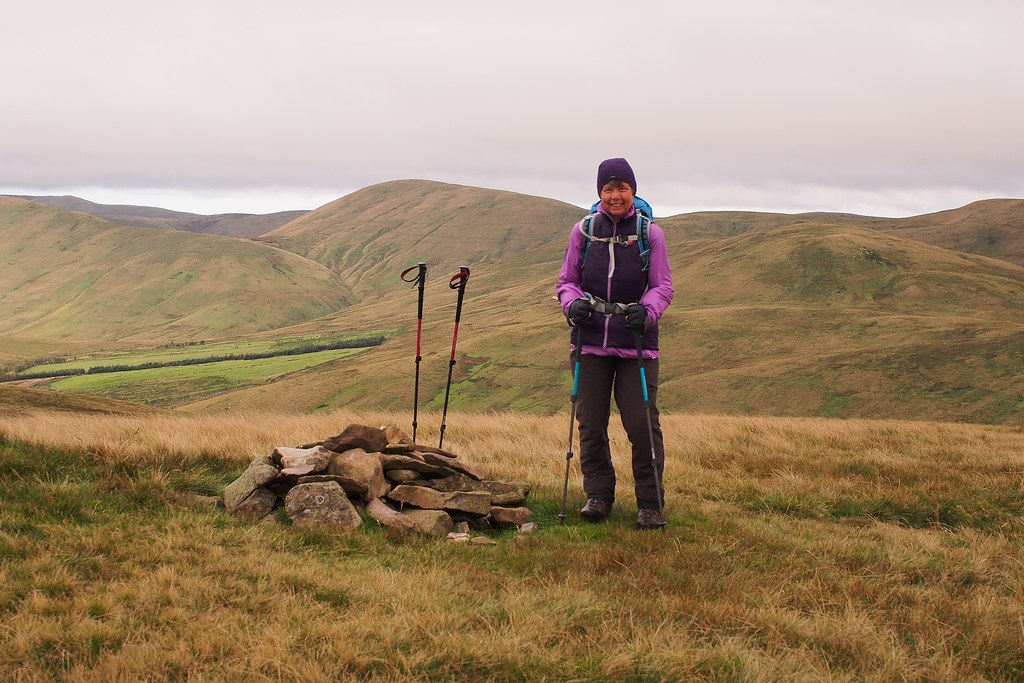 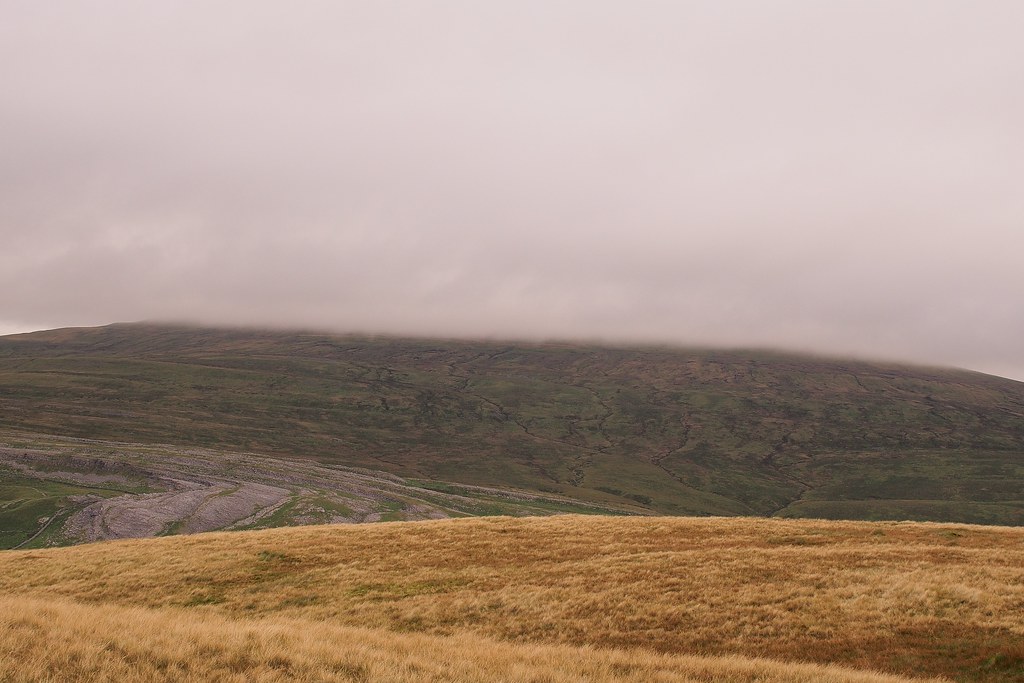 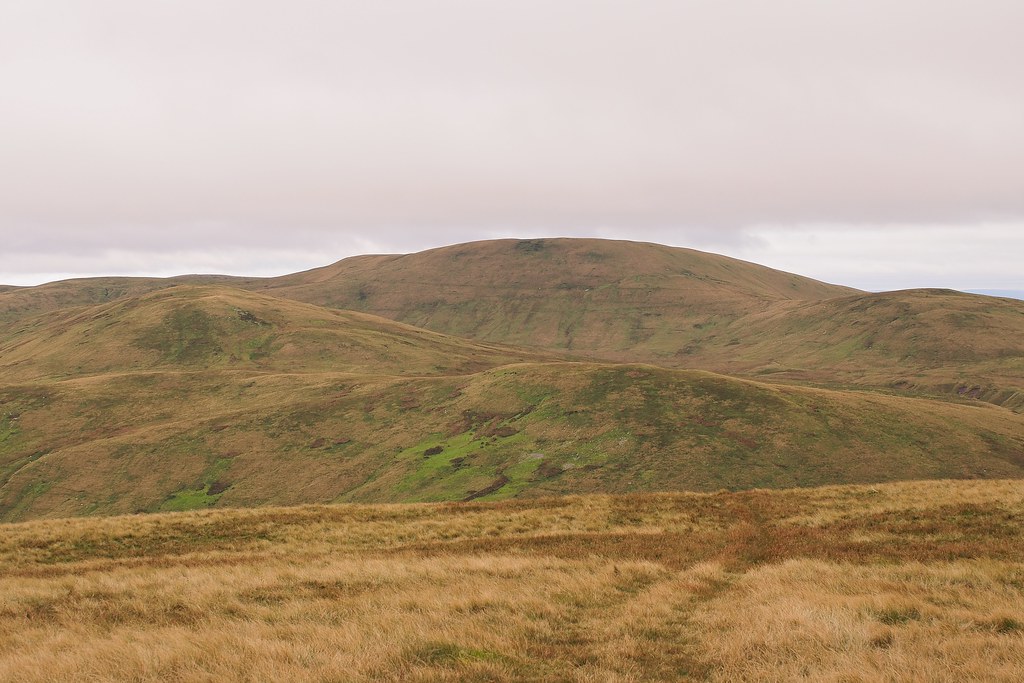 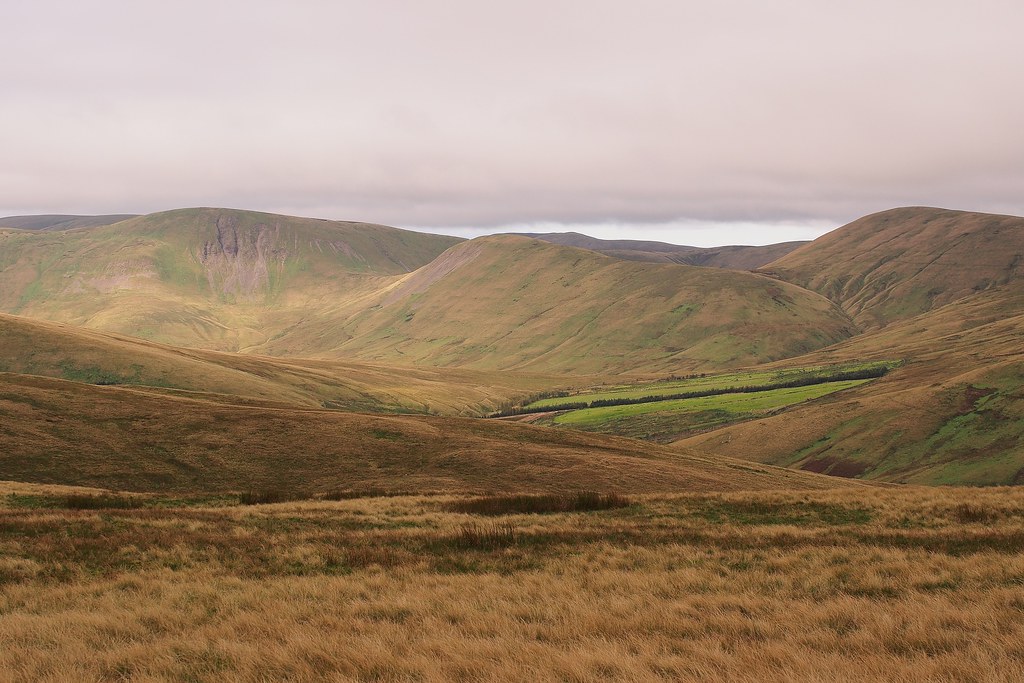 The Calf and Cautley Crag in the distance 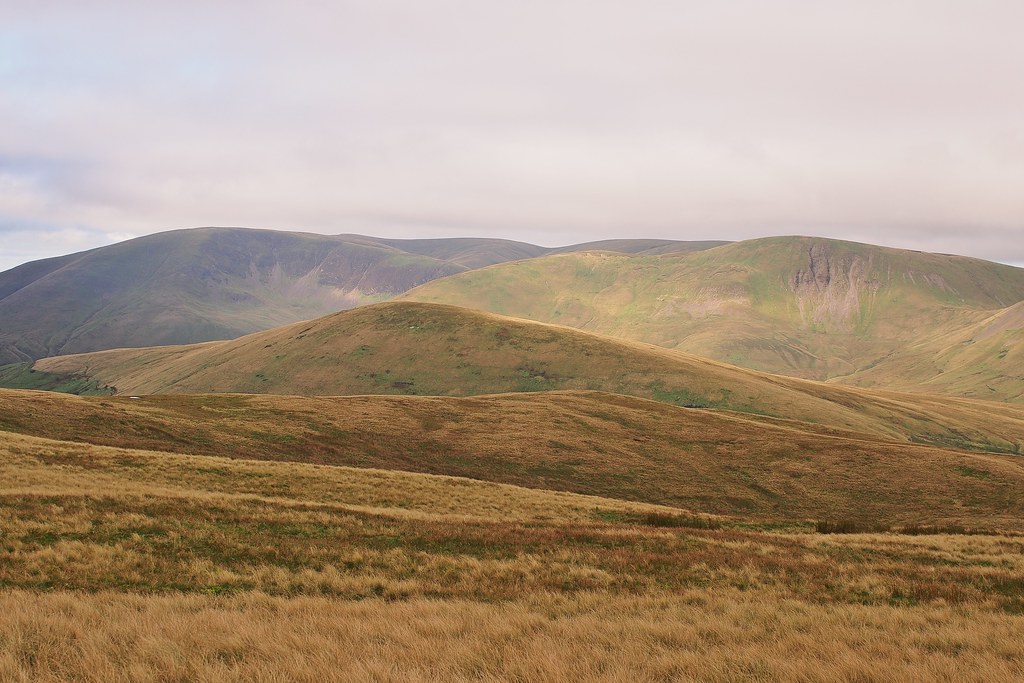 From the summit we re-traced our steps back to the road. Knott was next and we could see a rising traverse path running up the side of it so we decided to head for that. 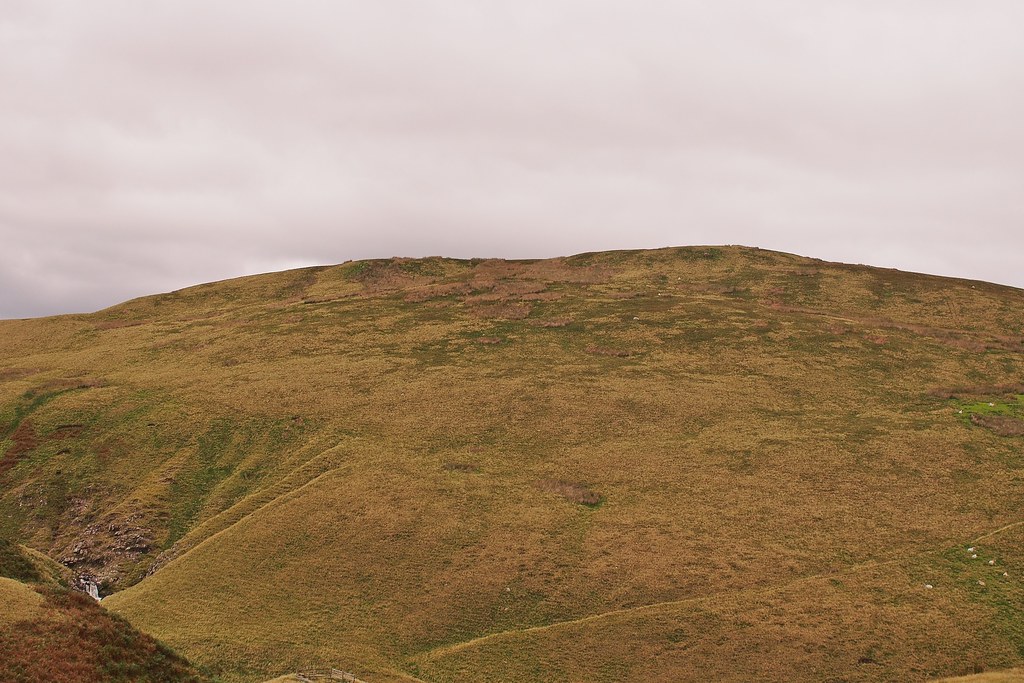 From above Gais Gill looked crossable just above the little road bridge so we tried a direct attack on the path up Knott, as we got closer, Gais Gill was looking a bit full for a quick hop over so we looked for a crossing point downstream towards the bridge, we eventually found a large enough boulder mid gill to use but by this time we'd nearly reached the bridge

Once on the traversing path we used it to gain a bit of height then left it and made a direct assault to the top of Knott, this was only a 50m climb so the summit was gained with little effort, two summits in less than an hour, not bad 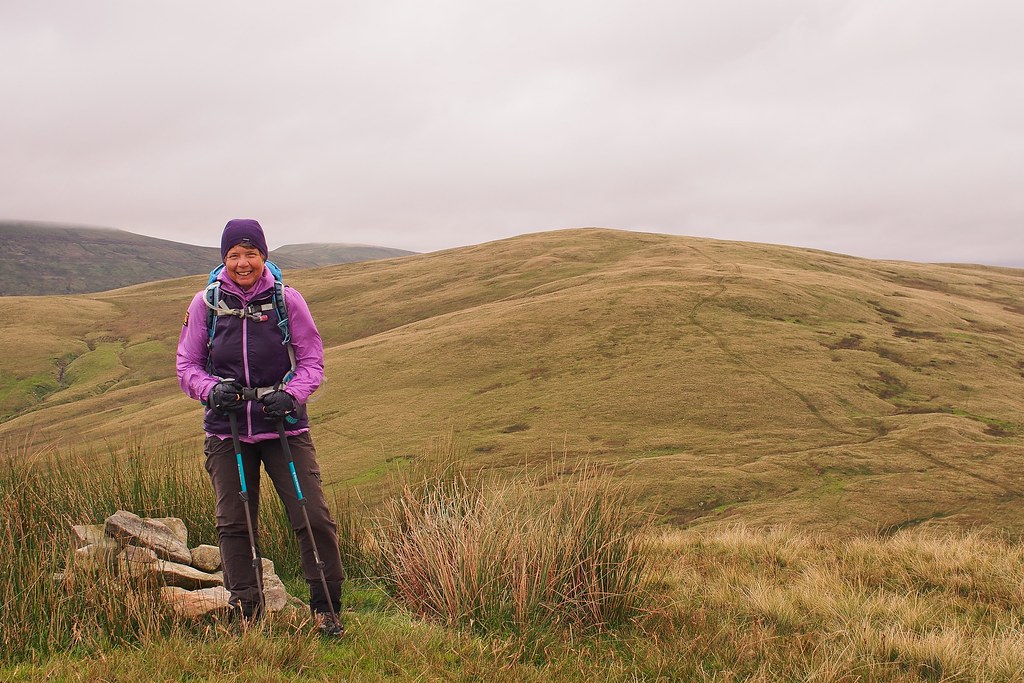 The views were good, the sun was out and we could see our next objective.

Knoutberry was next with Green Bell directly behind, we were going to leave Green Bell out on this trip and traverse around the hillside to Spengill Head. 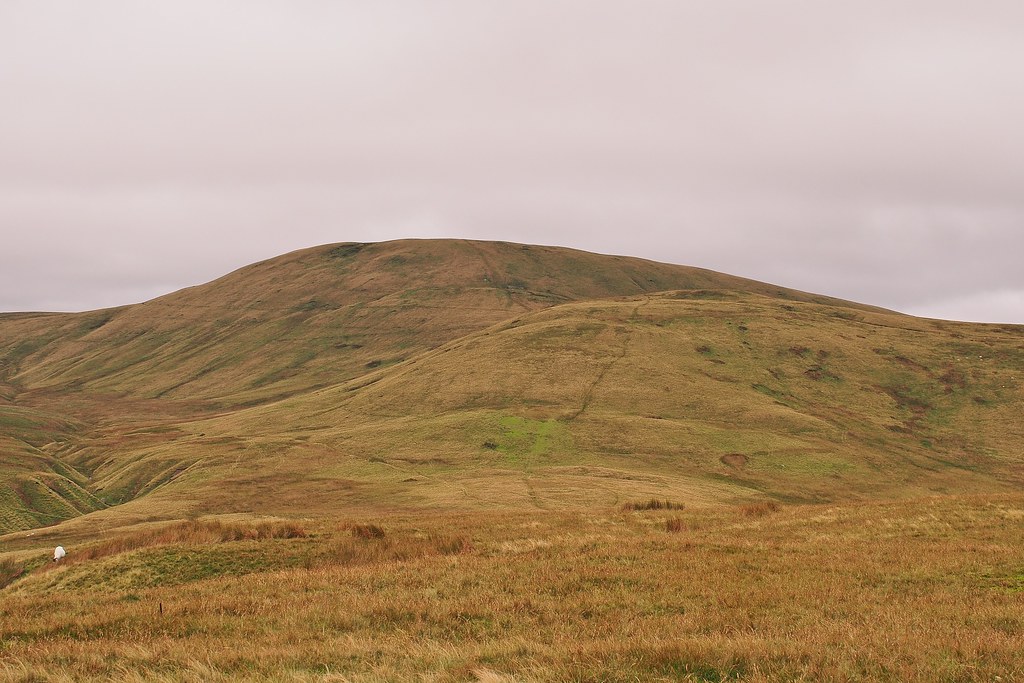 Knoutberry gave us some good views and we could just make our Kensgriff hiding in front of Yarlside away in the distance, Wild Boar Fell was still in cloud. We could see a path/animal track traversing around Green Bell so after a quick fuel stop we set off. 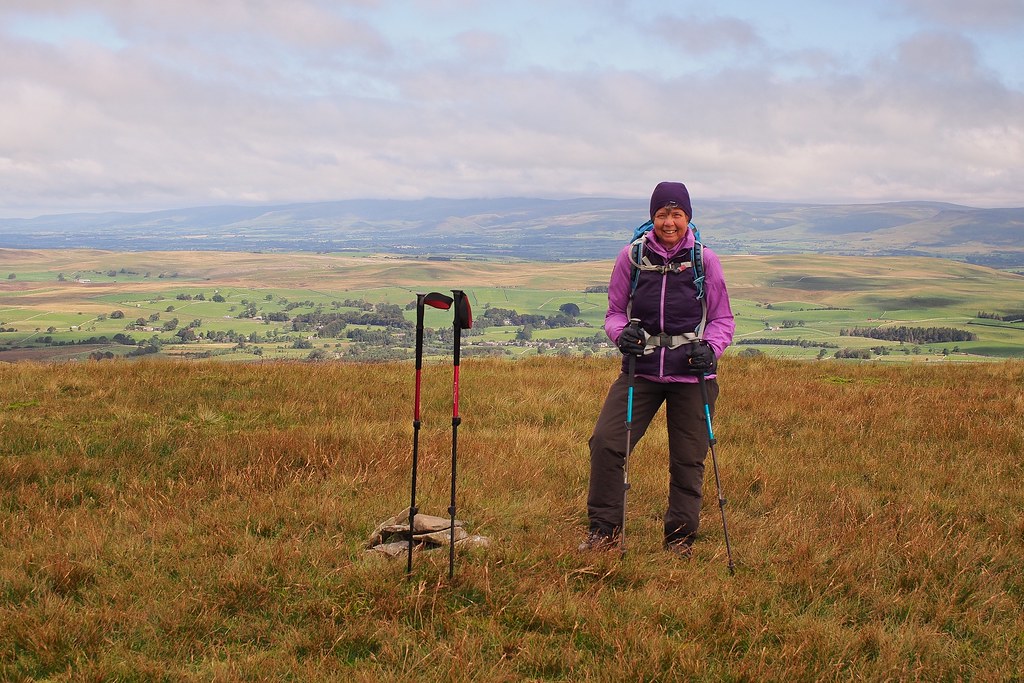 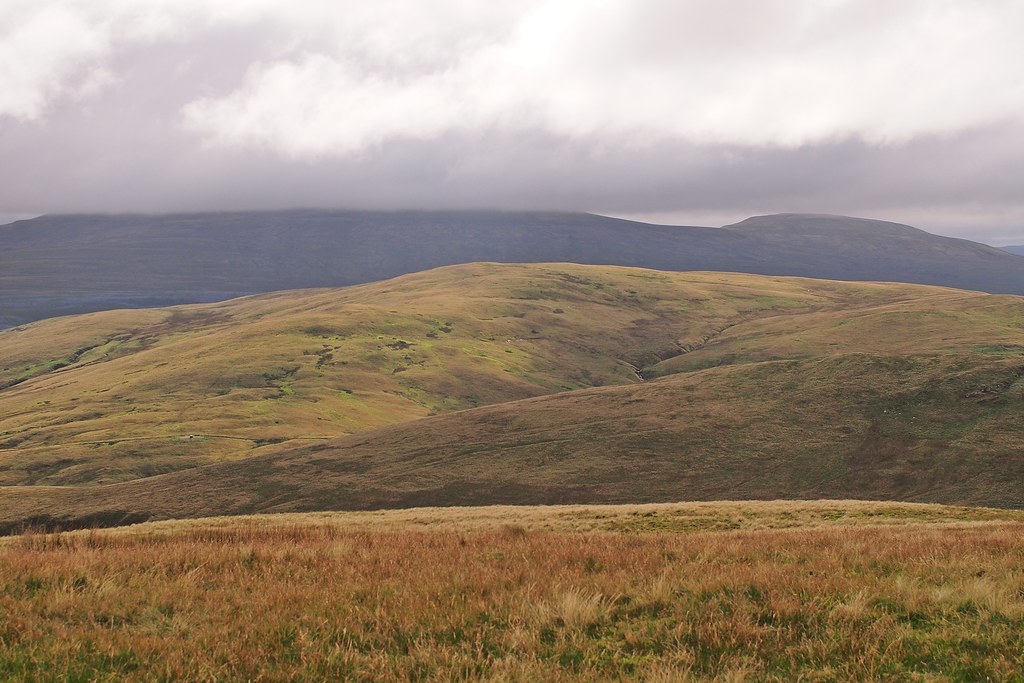 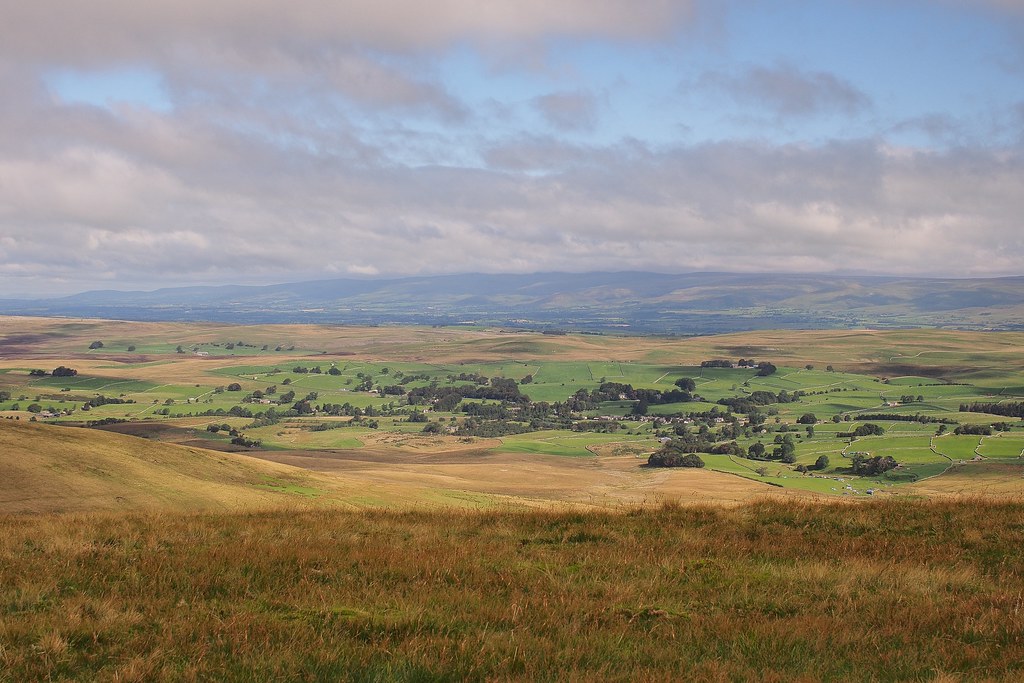 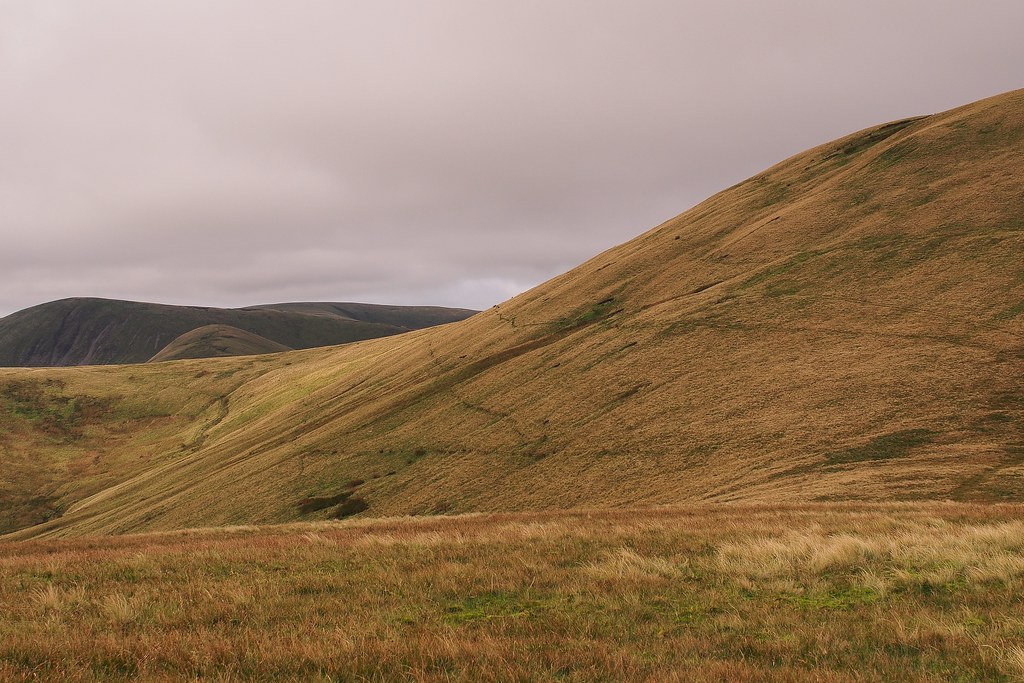 The traversing path was no more than a sheep trod but it was good to follow, we only lost it when we started the short climb up to the low point on the skyline which was as close to Spengill Head as we could be sure of, once up we joined the main path from Green Bell to Randygill Top followed this for a short while then started the gradual descent to the saddle between Randy Gill top and Kensgriff.

The wind was picking up now, stronger than forecast, and it was chilly, it just didn't feel like late summer

it wasn't that bad for the climb up Kensgriff but once on the summit, it was strong enough to lean into

not too far tho' otherwise you'd face plant the heather

, another thing we noticed was how brown the fellsides were looking, a definite feel of Autumn was in the air 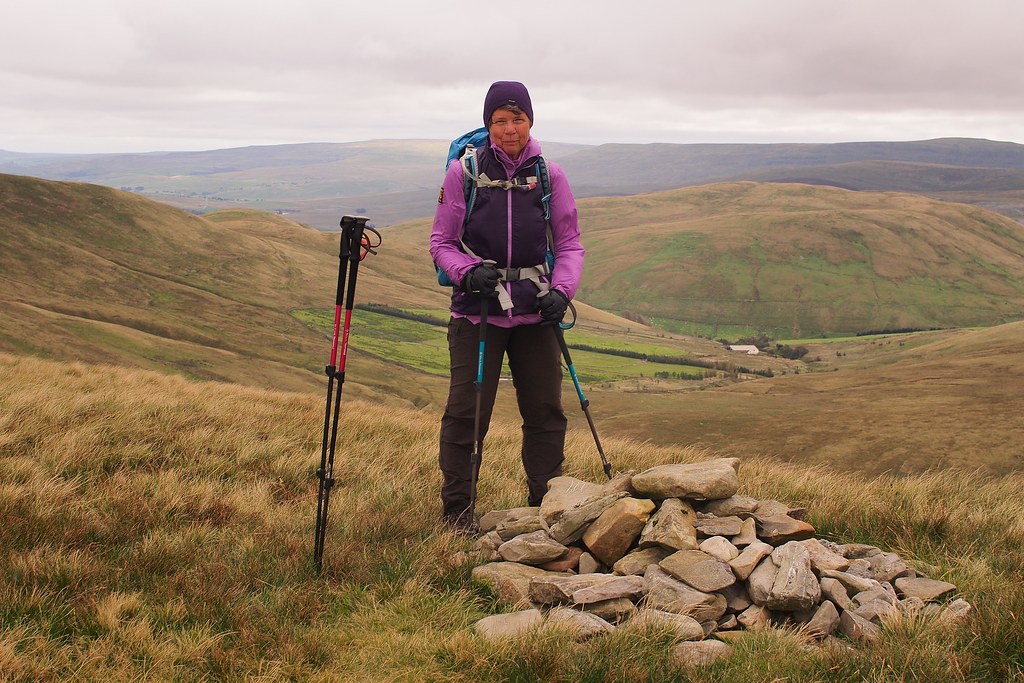 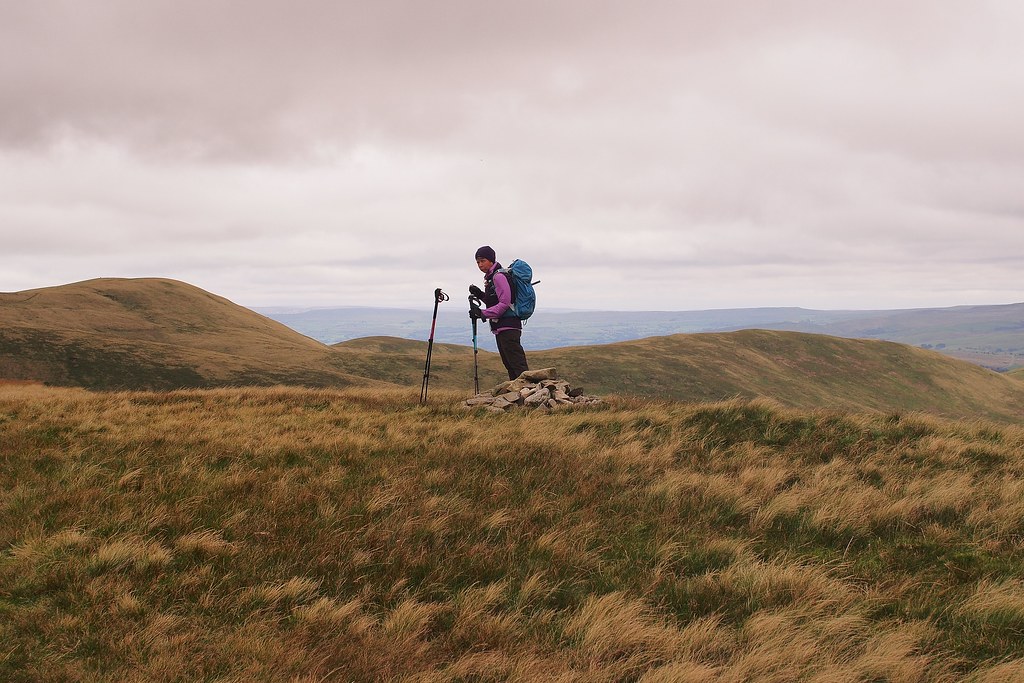 Yarlside was the most prominent hill around, its steep sides making it look quite a challenge from Kensgriff, i'd read somewhere that the ascent of it from here can be difficult, especially when wet, I could see why, it looked quite imposing. 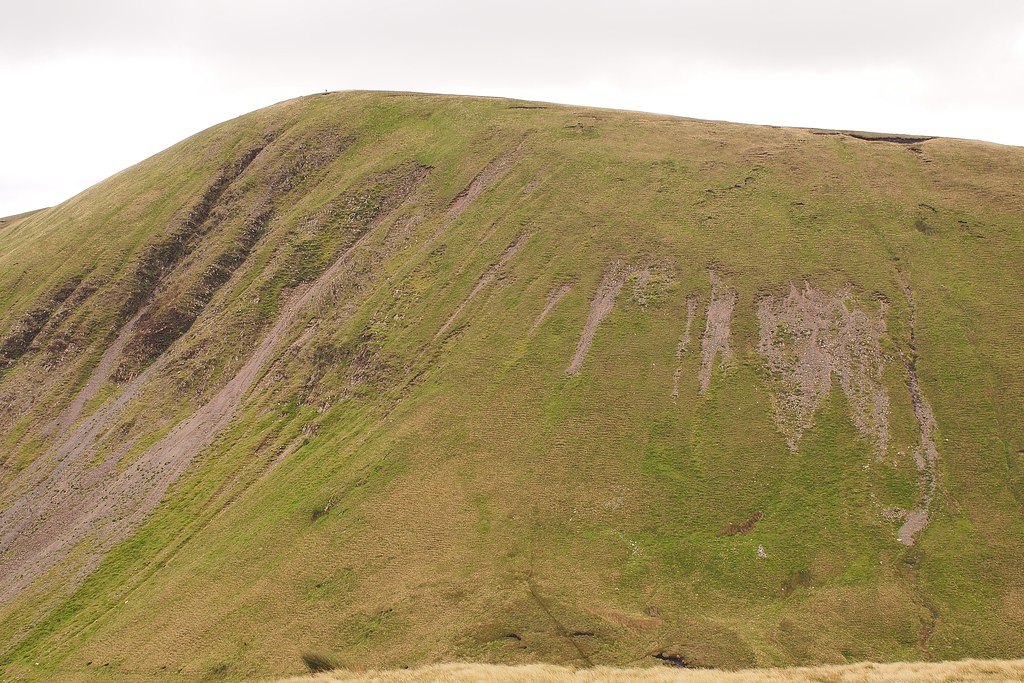 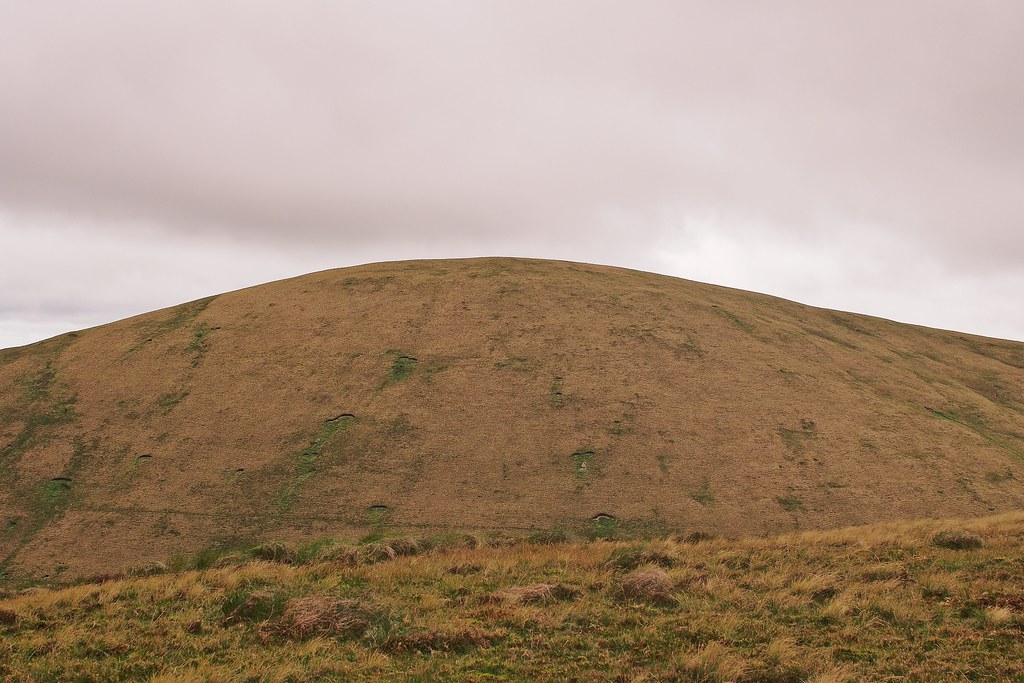 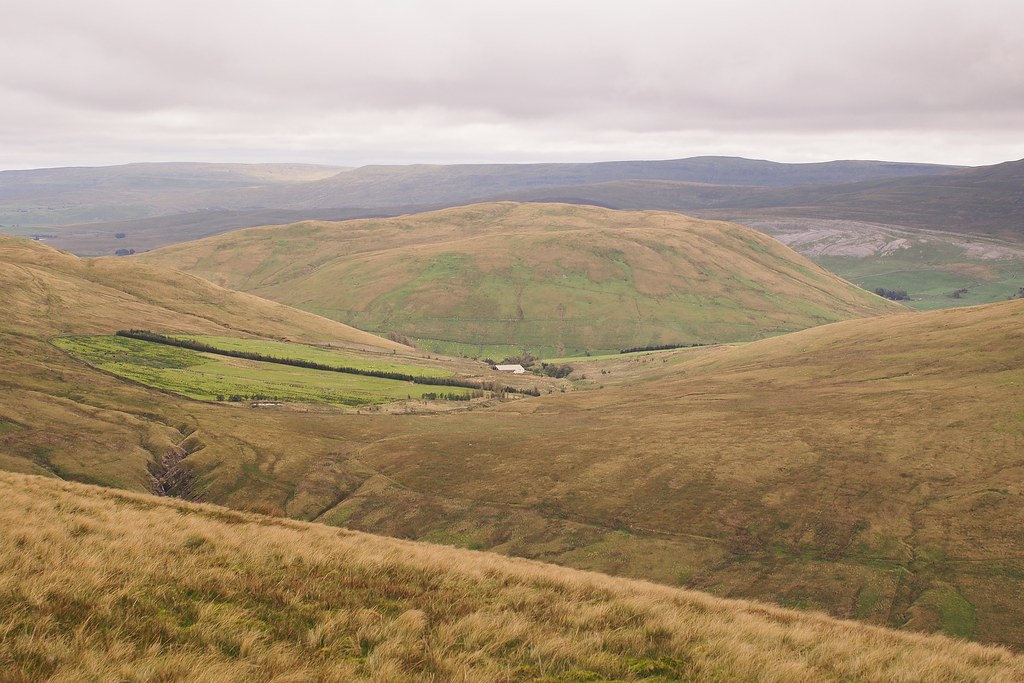 Pen-Y-Ghent in the distance 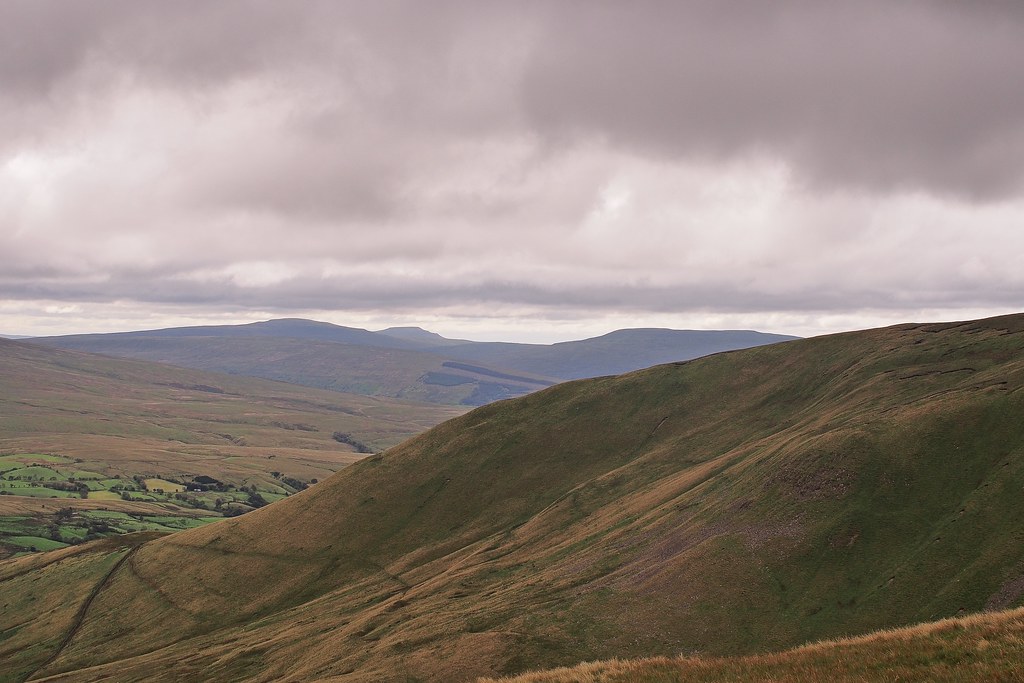 Kensgriff was our furthest point today so, after a few photo's a bite to eat and a fight with the wind

we re-traced our steps and headed in the general direction of Grere Fell.

We left the path at around NY697008 and followed one of the two quadbike tracks leading to Grere Fell, most of this is over tussocky fellside with a few of soggy bits to skirt around but it was easy enough to travel over.
There's no cairn on Grere Fell, the view back to Green Bell was good though, we could see our next little top, Adamthwaite Bank ahead but to get there it was quite a steep descent to the soggy saddle below, there's a little climb to the high point. Once up there we could see the car and it looked closer than I thought it would

From Adamthwaite Bank there's a steep descent to the road, we aimed for a spot at around NY714007 and once there it was a short walk up to the car.

This was a good day out, this is a very quiet side to the Howgills, we saw a few people in the distance on the bigger fells but only got close enough to one couple to say a quick hello to whilst we were out.

Our next foray will be from the south side of the fells, hopefully in the not too distant future


An alternative way to do Ben More.

We got what we wanted on Beinn Fhionnlaidh

Another foray into the Howgills

Windswept and Watered on Grayrigg