Finding the quiet side of Whernside.

We hadn't had a walk on Whernside for a couple of years so, as a way of getting out for some fresh air, a walk in the Dales over familiar ground would need no planning. The forecast was reasonable so our Whernside/Ingleborough route from Ribblehead, a walk we've done many times, would fit the bill nicely. With no need to go into work Saturday a.m our minds were made up

The drive up to Ribblehead takes just over an hour from home so we arrived reasonably early, 08:45 and were surprised to see how busy it was, there's a large layby by the junction with the B6479 and B6255 at Ribblehead, that was full, all the parking by the Station Pub was taken so we used the verge parking on the left just a little further on heading in the Hawes direction, even this was getting full, it's been much improved and expanded over the years so there's plenty of parking available but, wow, 09:00 and not so much room left

I wonder what it's like in the summer nowadays

We were off towards the viaduct by 09:10 following several groups of varying sizes, 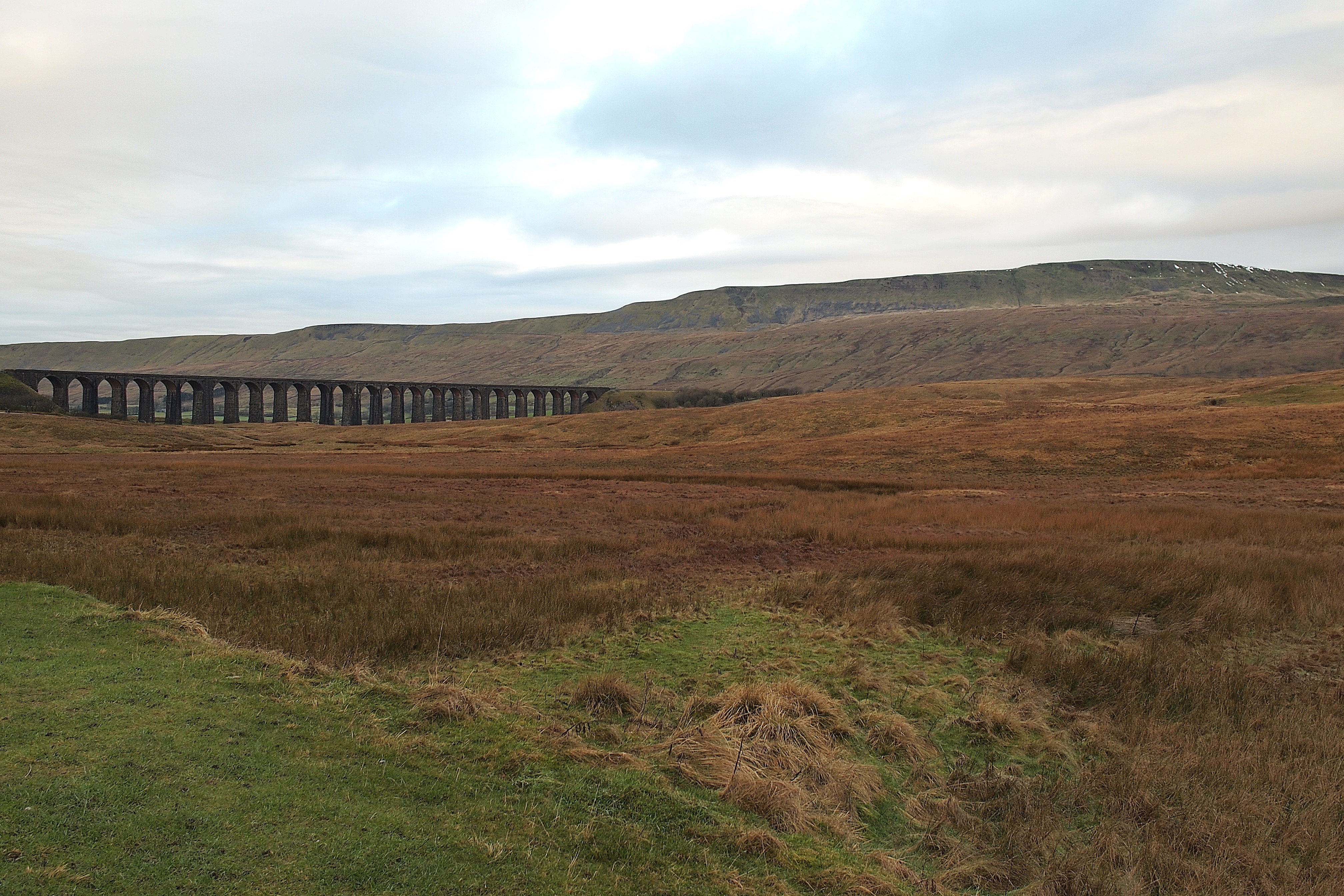 it was going to be busy but at least we were out, our first day in the hills 2022 and we were looking forward to it

We followed the Three Peaks path which initially runs alongside the railway, if you're lucky, really really lucky you may time it when there's a Settle to Carlisle steam train passing

we've only ever been lucky once but it is an incredible sight because the railway is really close to the path here. 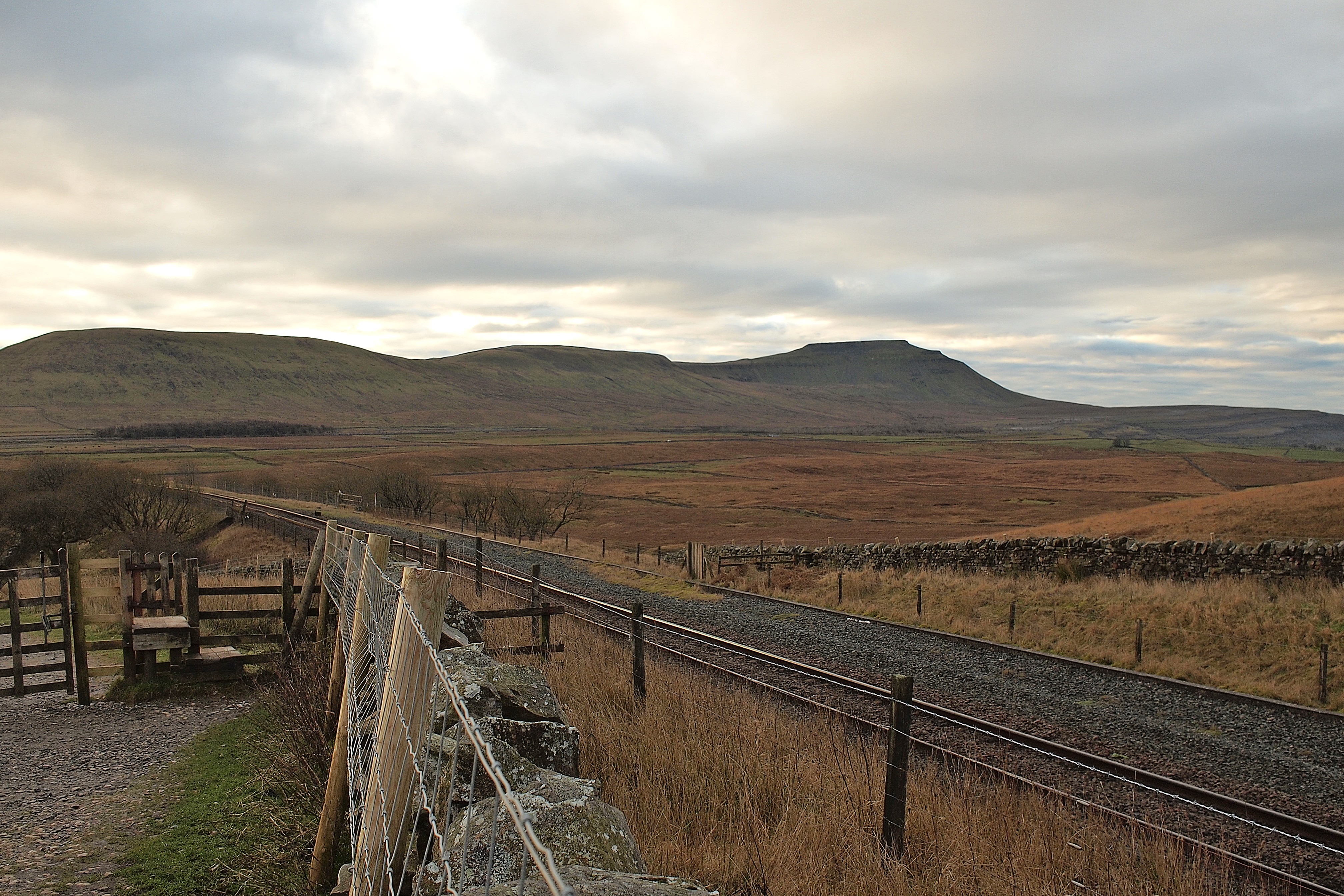 And Ingleborough looks good too 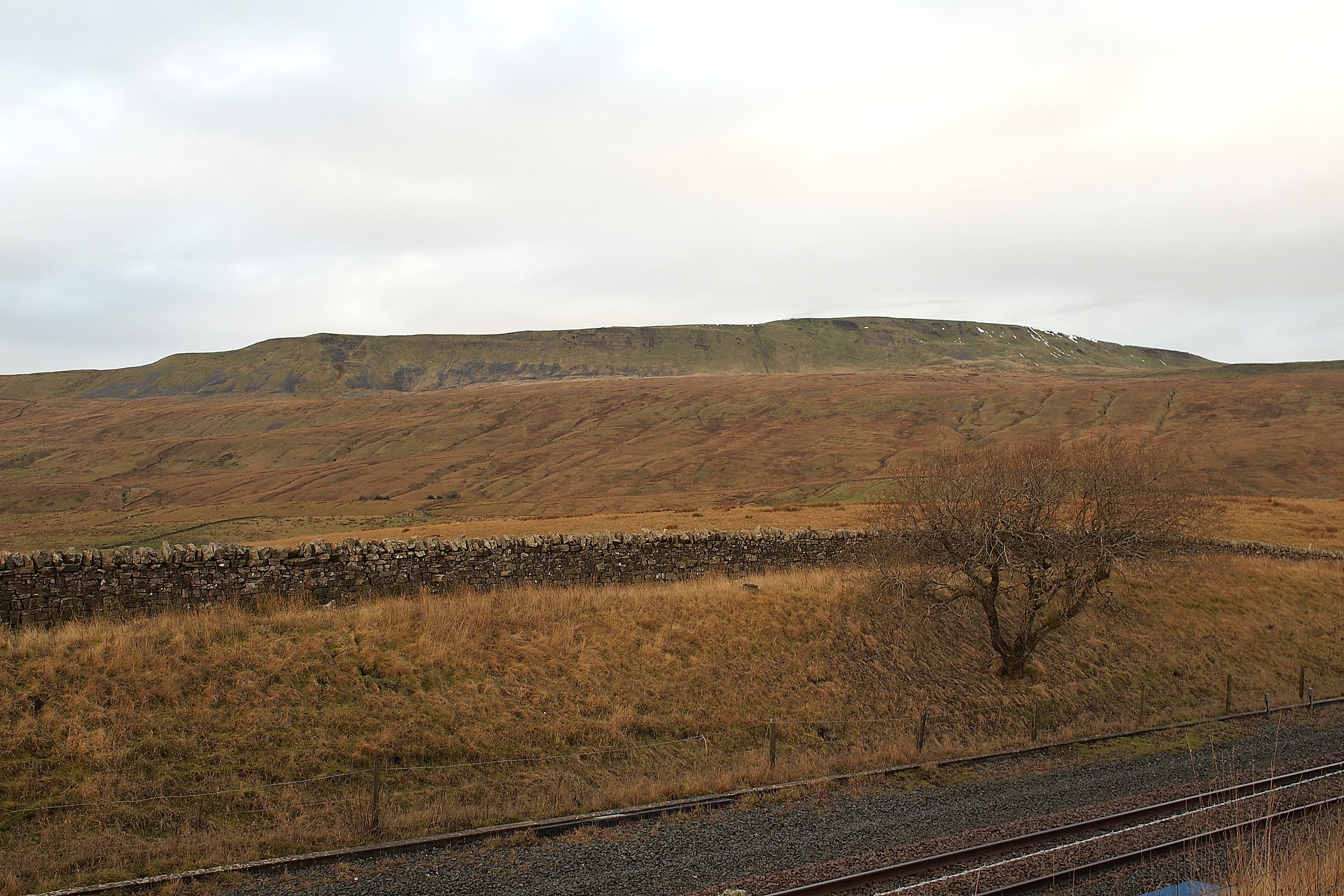 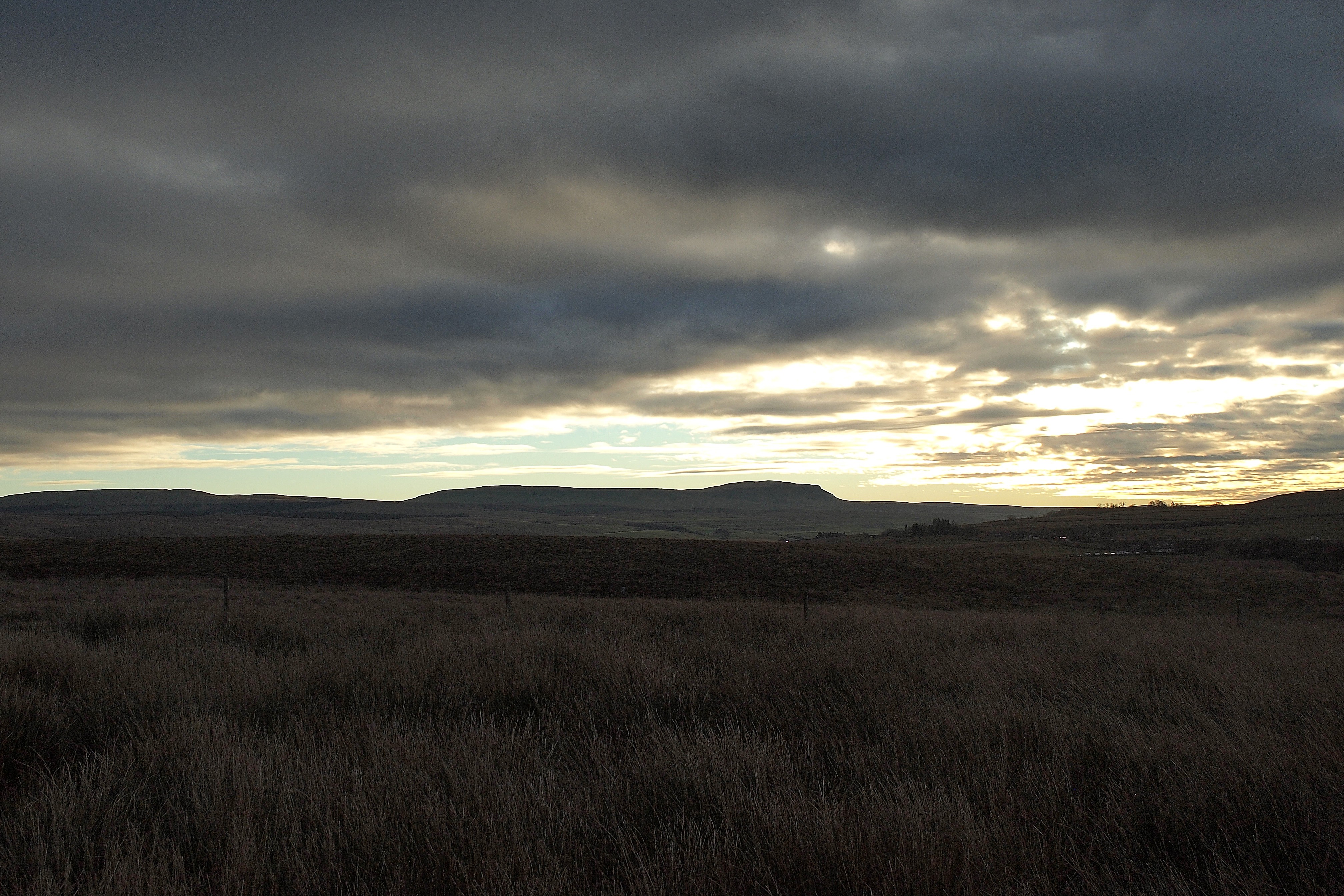 It's a well graded path all the way to the summit, this has been improved since we were here just a couple of years ago, I can remember when I first did the Three Peaks back in 1977 this was not the recognised route then, in those days it was a direct assault up the face of the hill behind Gunnerfleet Farm, it was a very boggy route, especially in it's initial stages, it's still marked on the map but I don't think anybody uses it today, it was quite a lung buster

The forecast was not quite as good as promised but, higher up, we were getting some nice views. 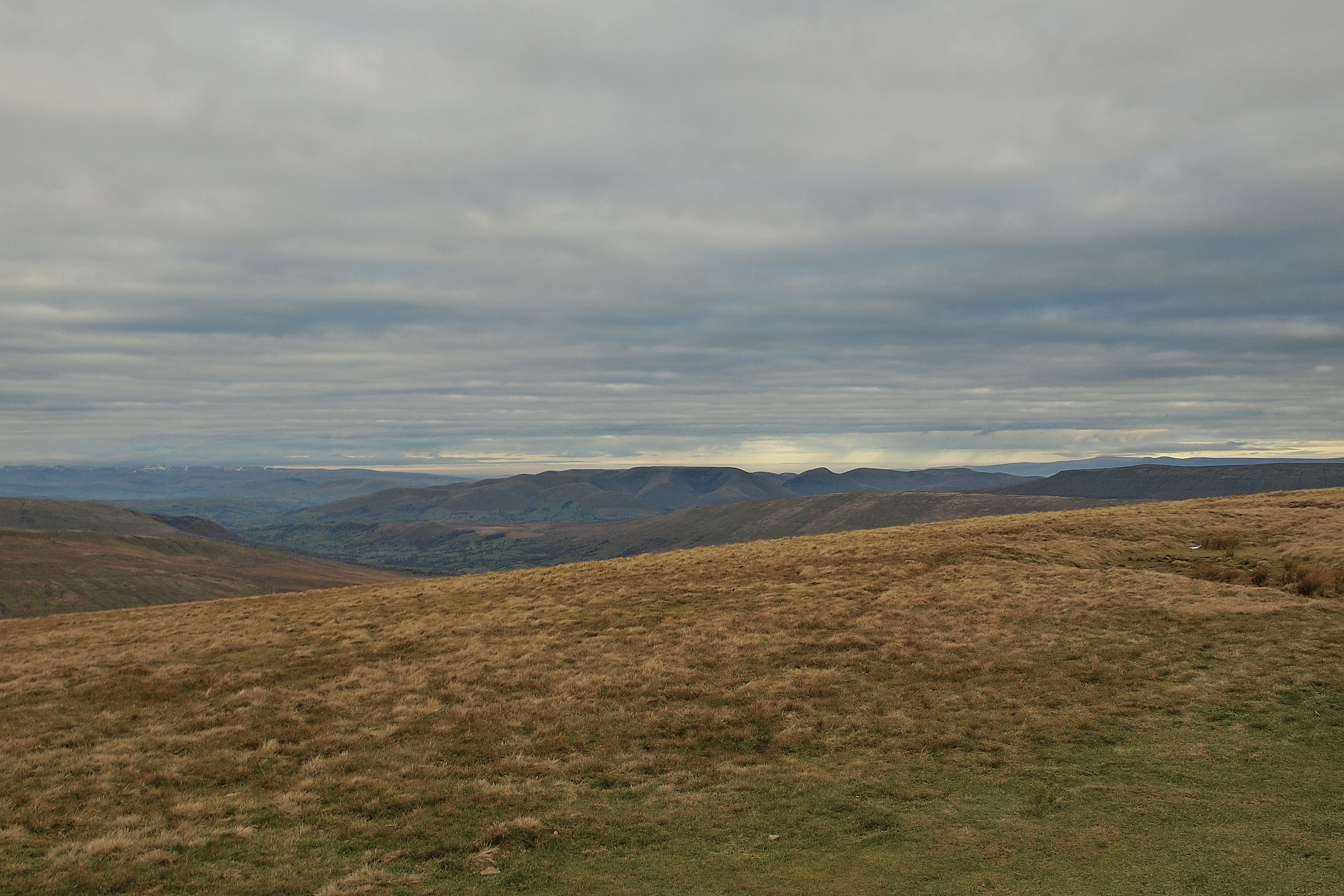 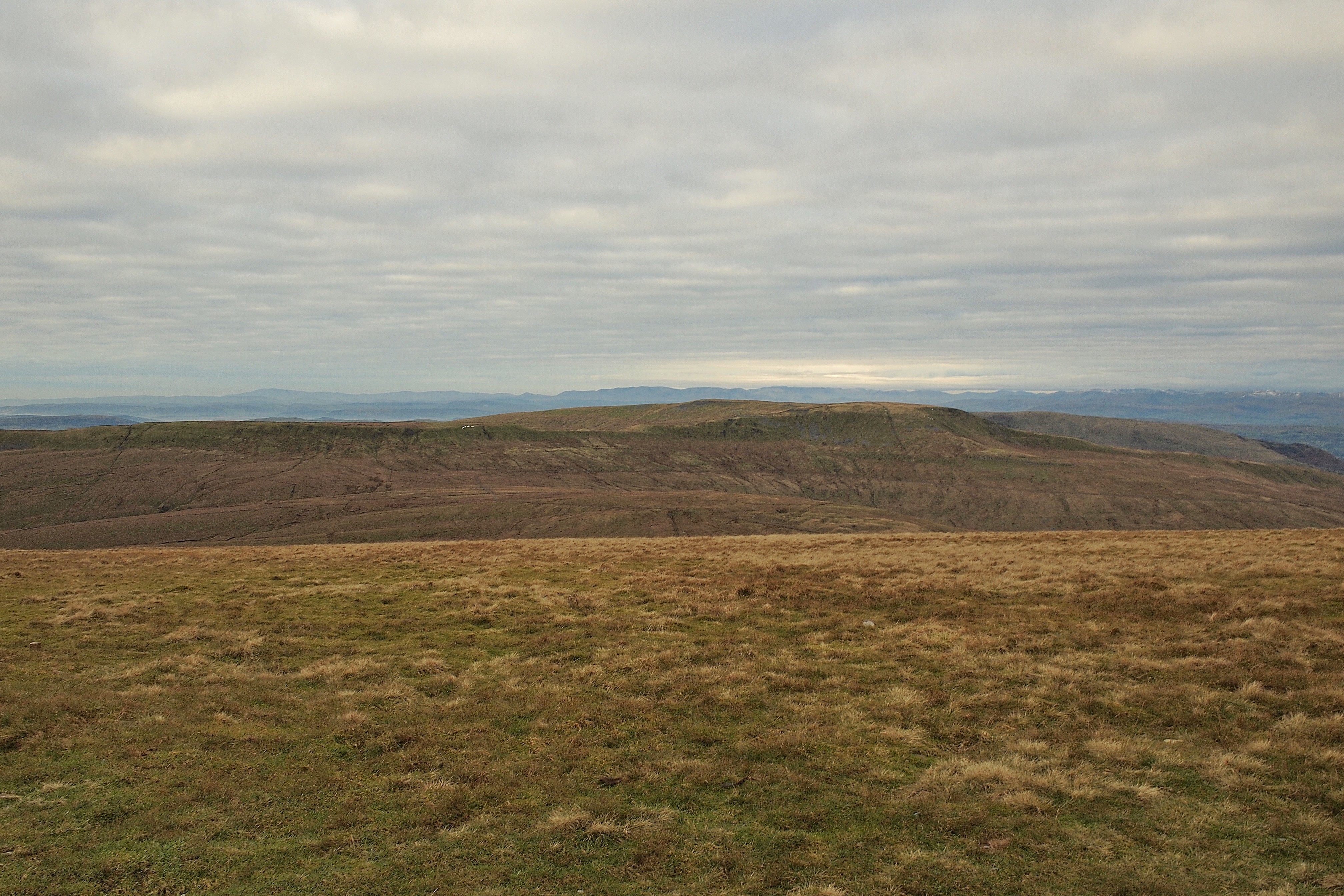 On the summit there were a few people about but not as many as we thought judging by the line of walkers we could see when we were lower down, the views were getting better 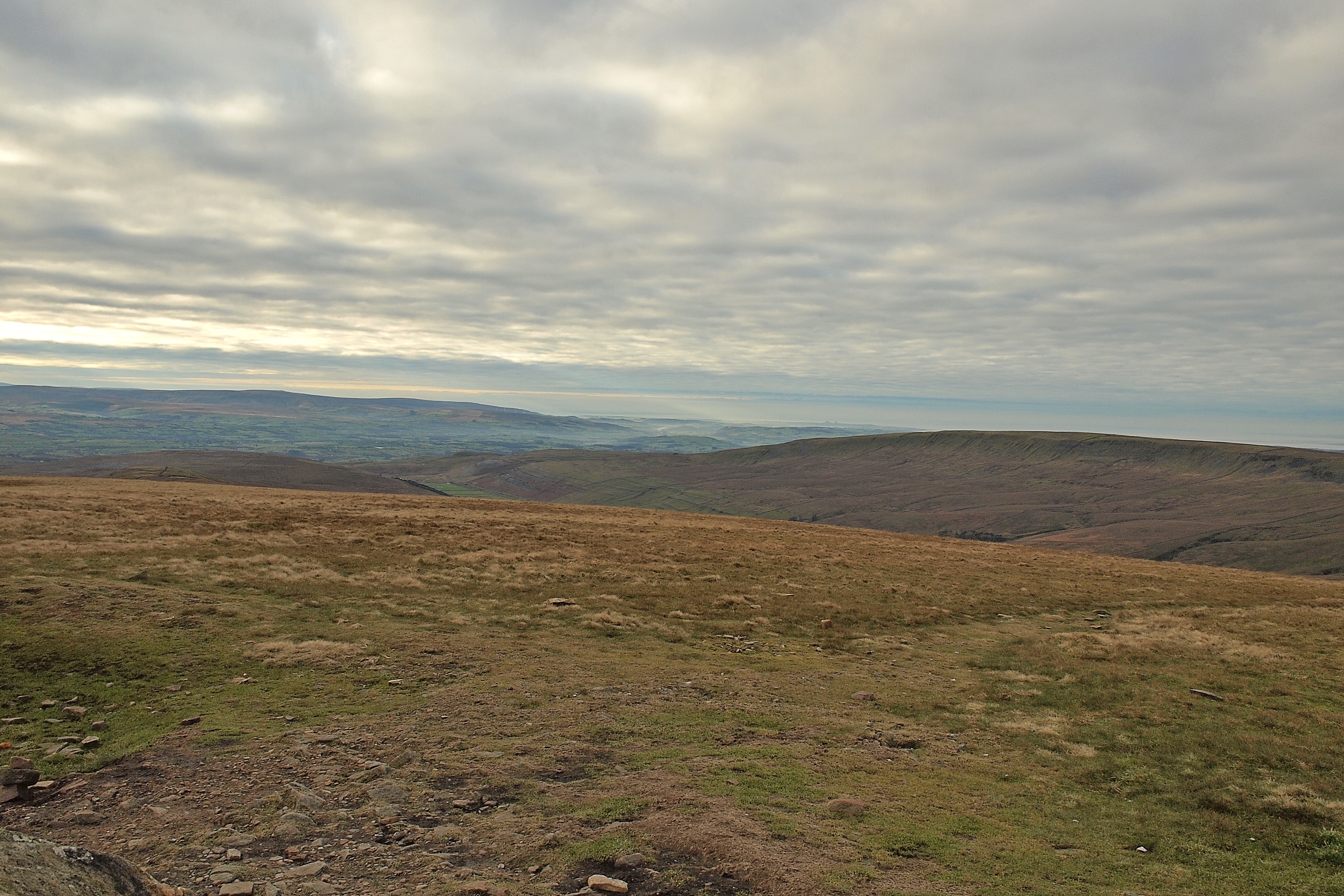 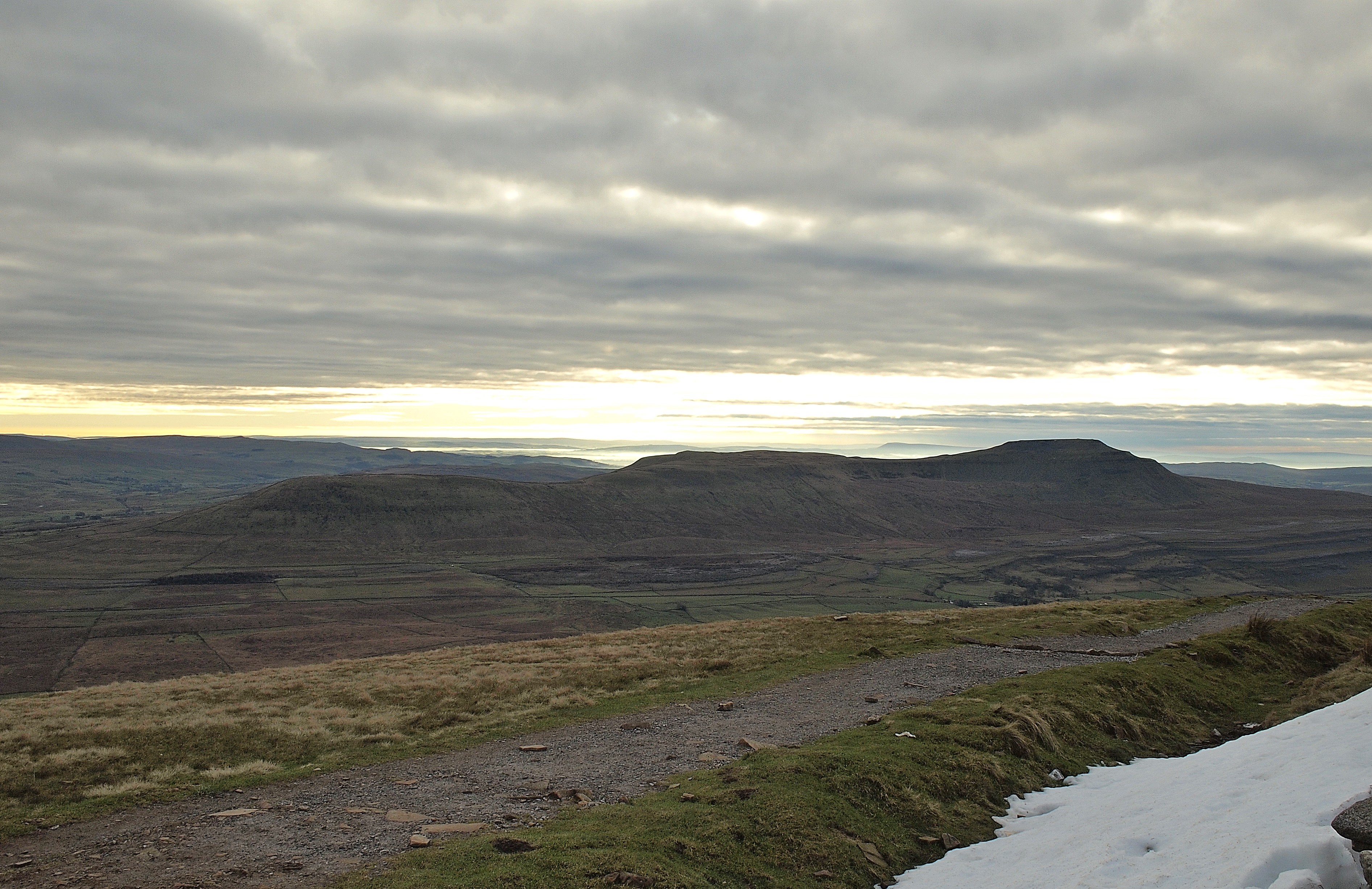 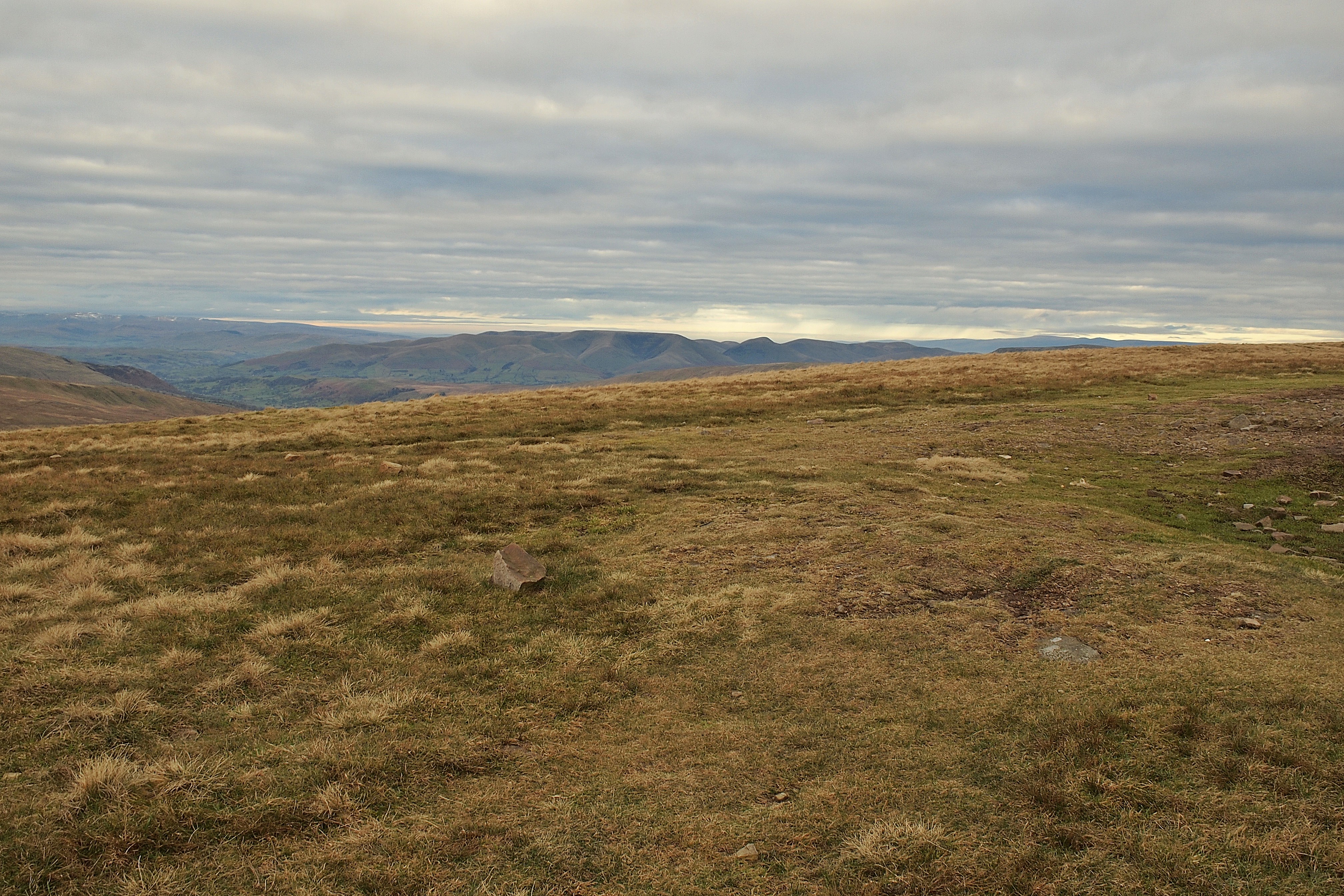 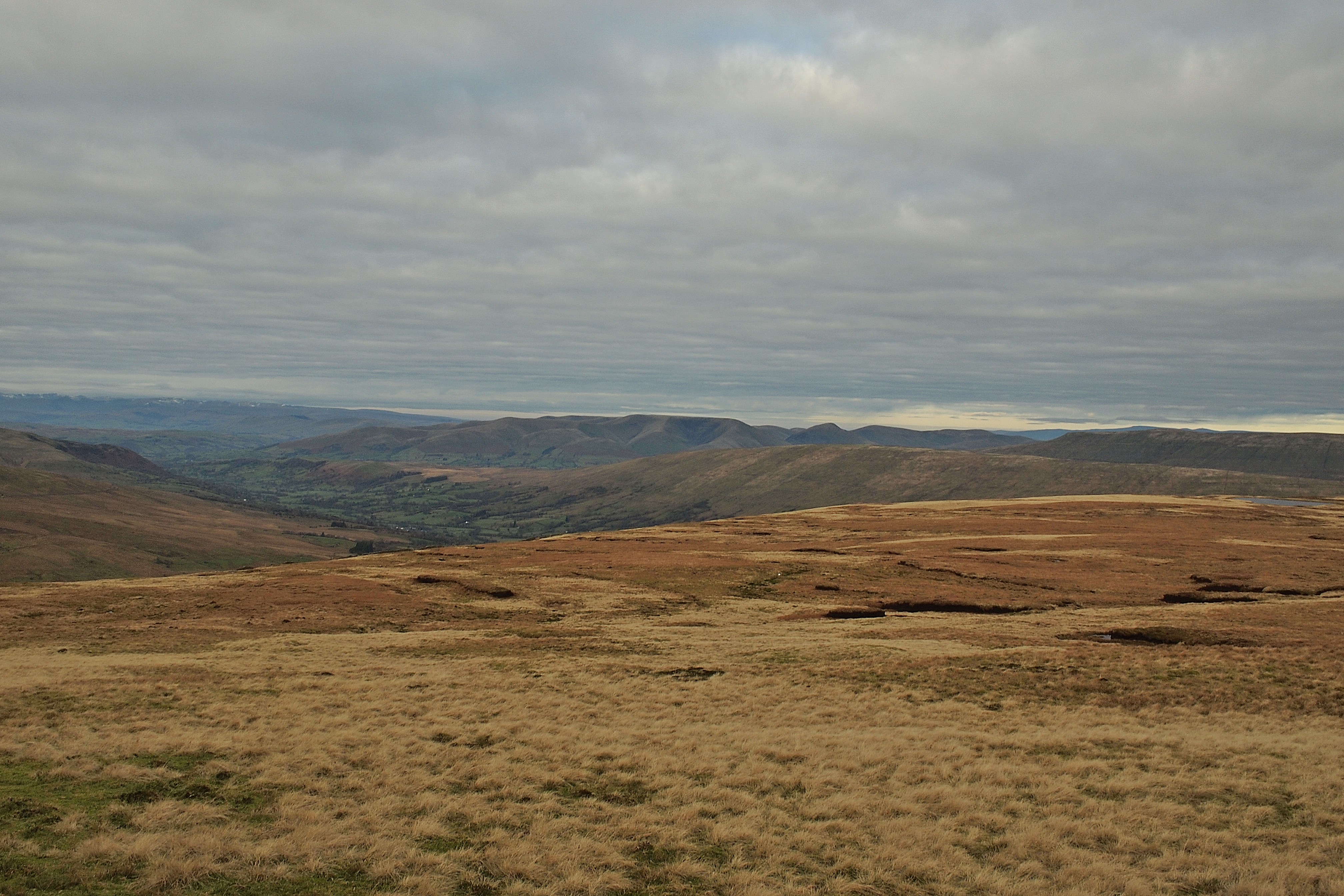 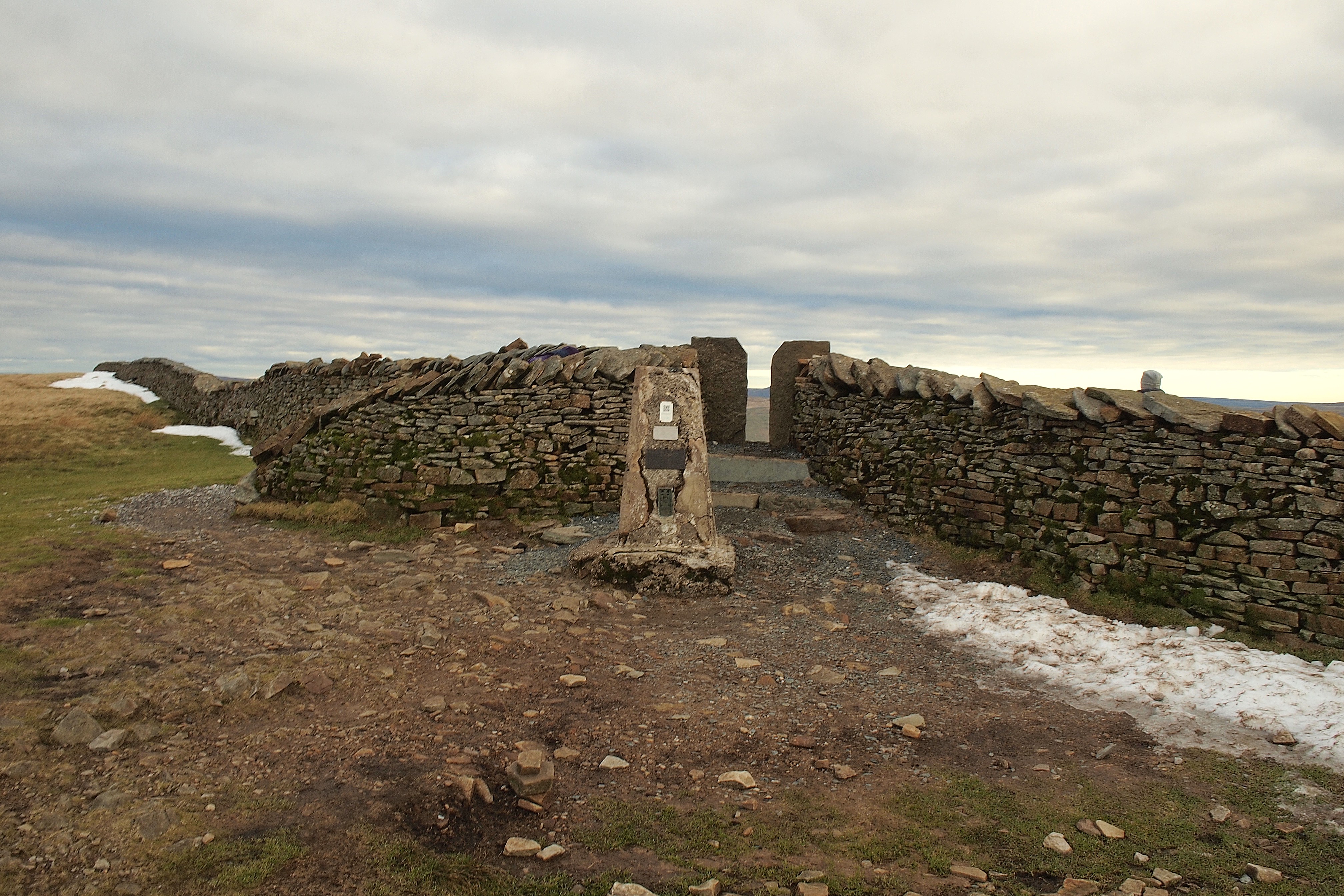 it was going to be busy on the way to Chapel-le-Dale so instead of doing Ingleborough again we decided to do something a little different and travel in the opposite direction and go and have a look at Whernside Tarns, on the map the A Pennine Journey path passes the tarns so we thought it would be nice to go down to them, have lunch, then carry on to join the
Craven Way/Dales High Way @SD746845.

The path sets off on the opposite side of the wall to our ascent so we didn't have to dodge the people coming up. There's a gate in the wall lower down so no problem getting over it and we were soon on our way to Knoutberry Hill. 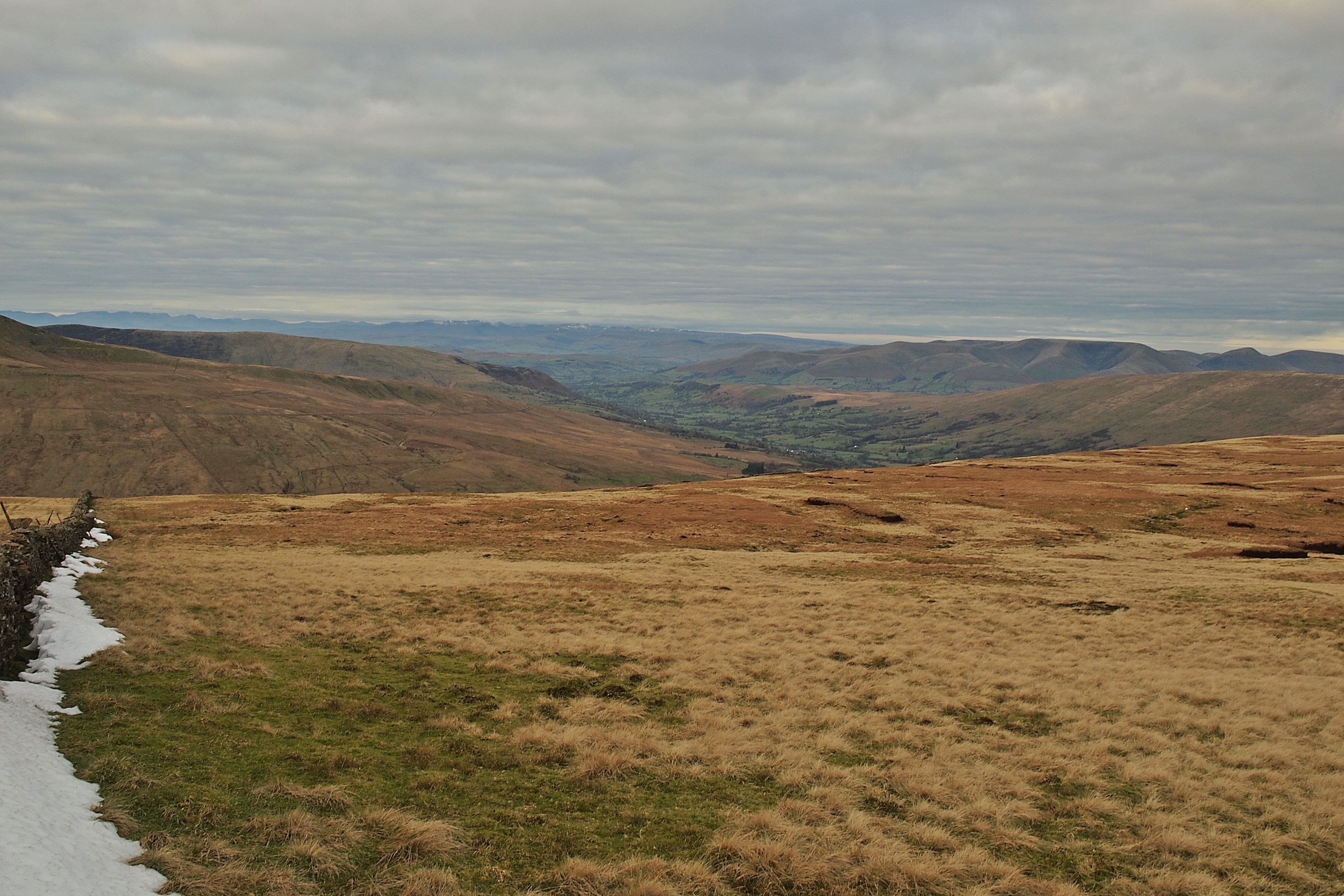 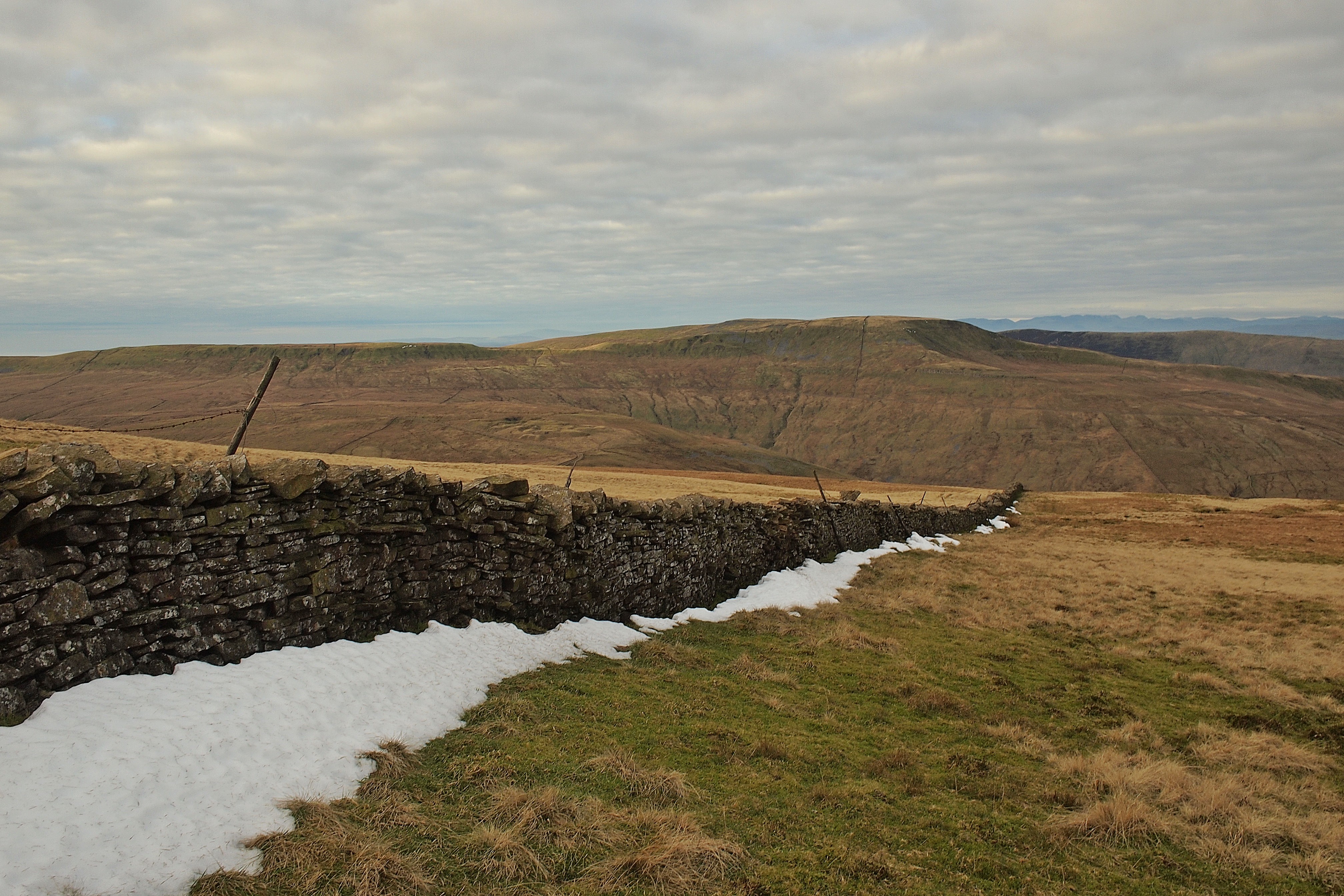 By the time we reached the tarns it was getting brighter, there's loads of boulders near them so we even had some nice seating arrangements for our lunch

It was nice and quiet, we only saw two other people, a total contrast to our ascent, we spent half a hour just sitting and having lunch, the sun was out by now, it was nice just being somewhere a bit different, in the fresh air and off the beaten track, it'll be a good spot on a warm summers day. 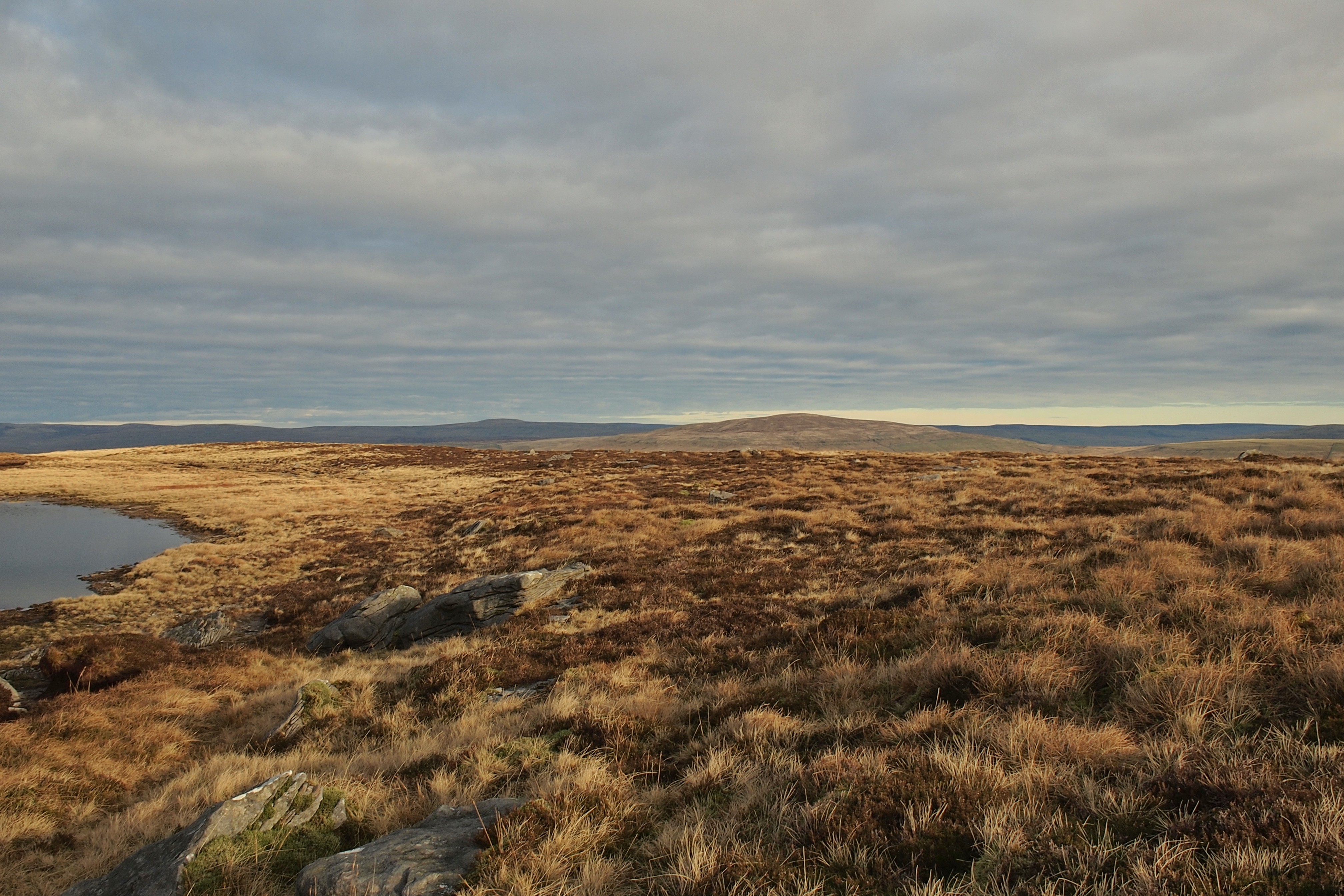 After lunch we walked around the tarns then set off down to the Craven Way. 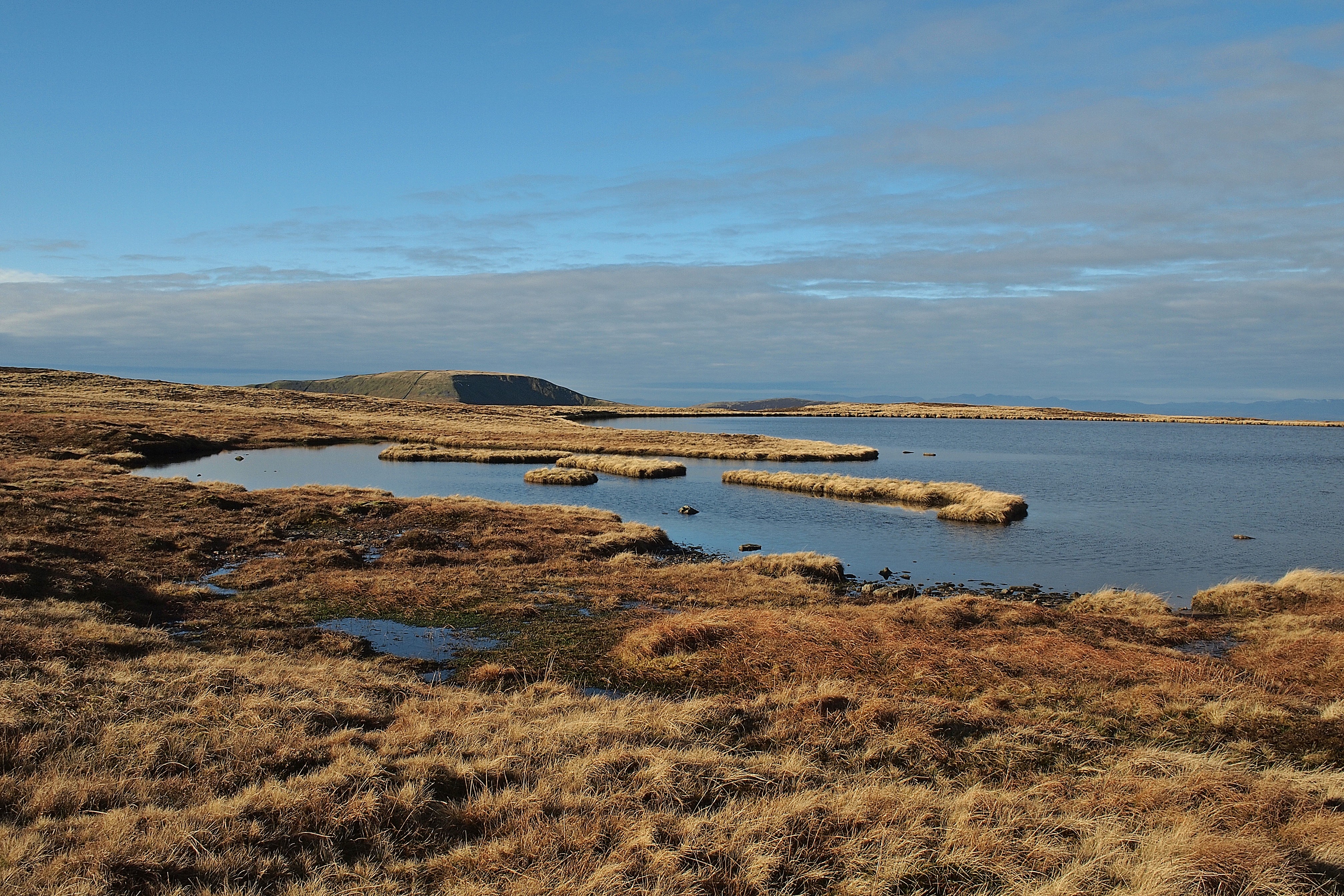 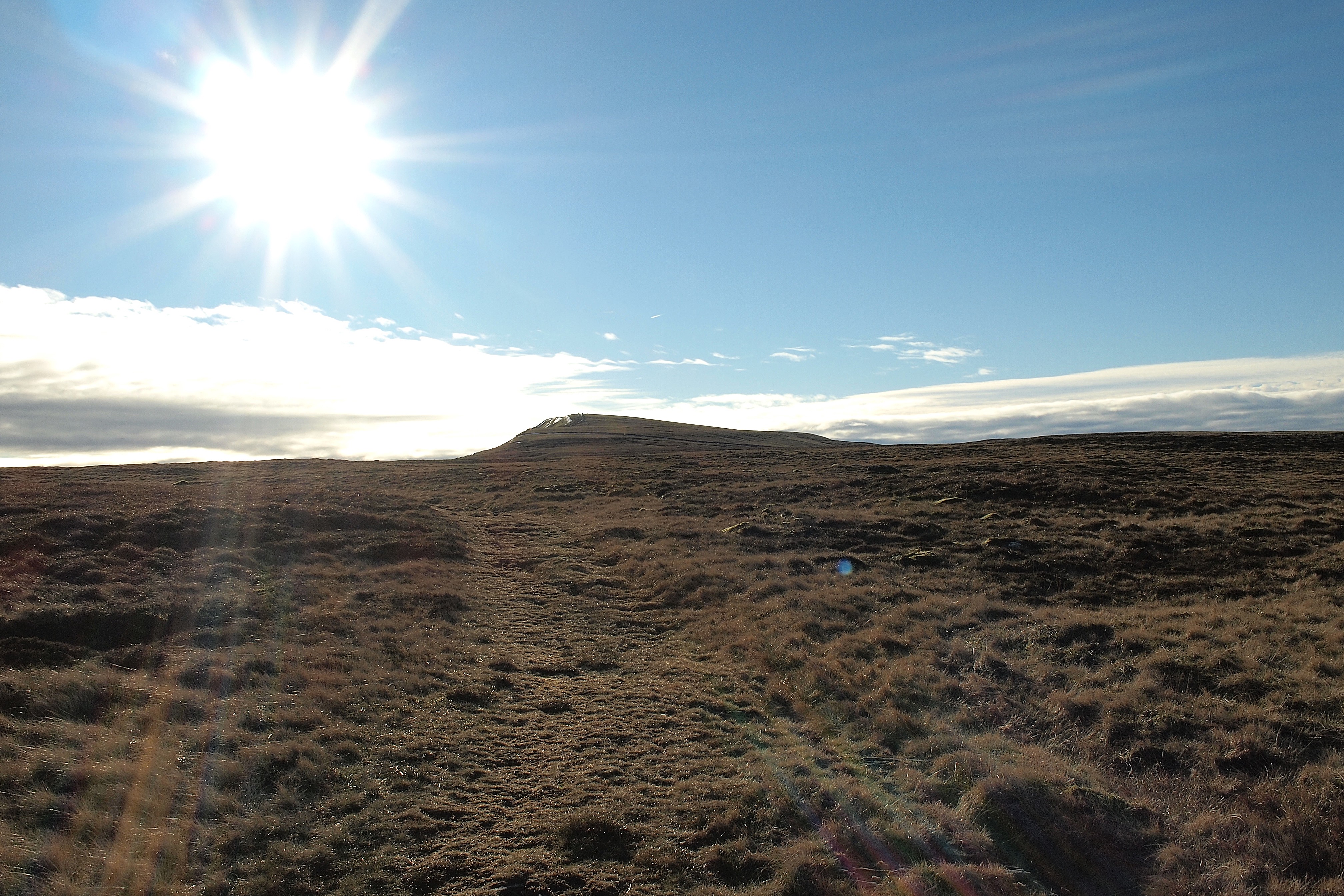 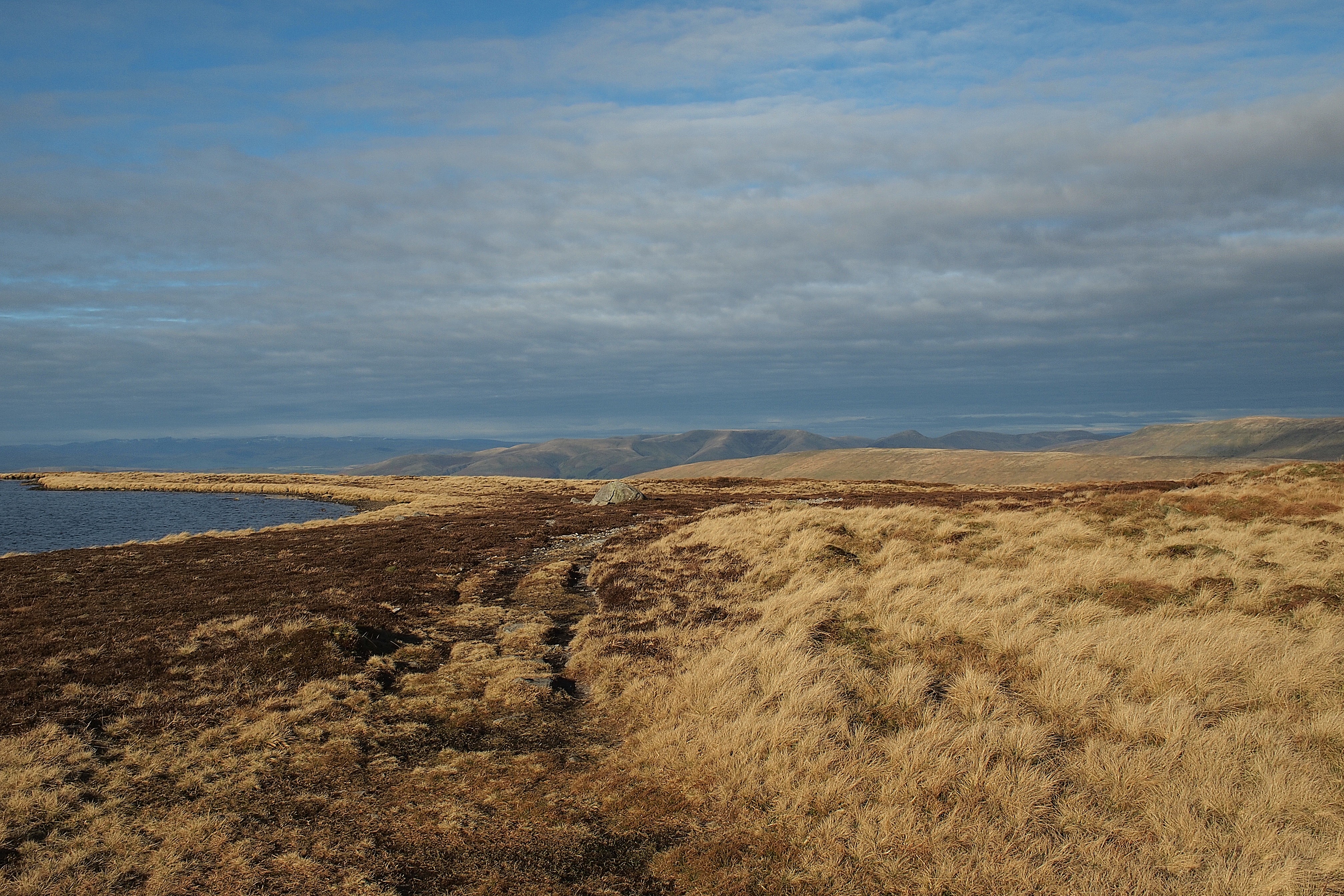 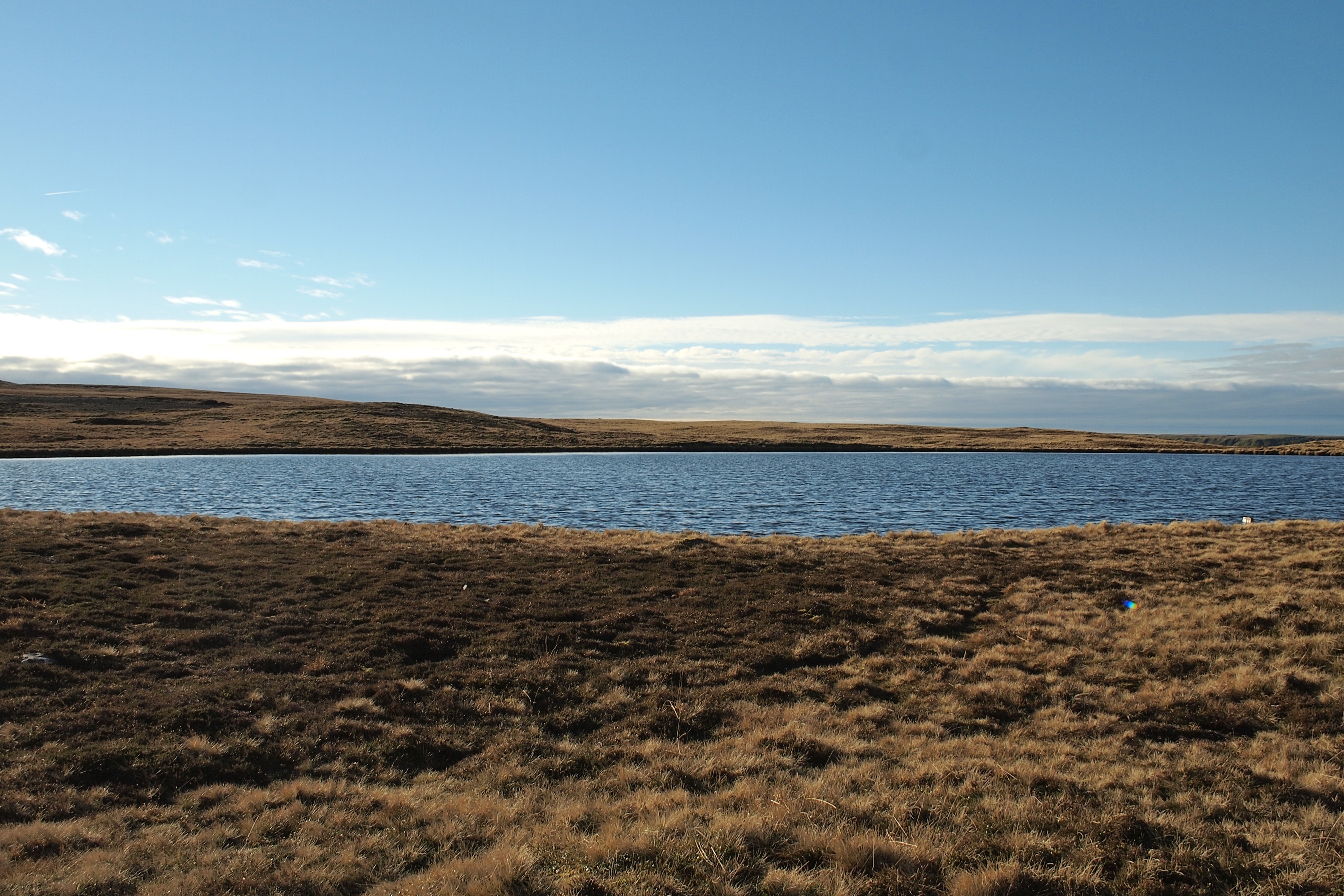 Not a great shot because of the flat ground, that's Calf Top to the right in the distance 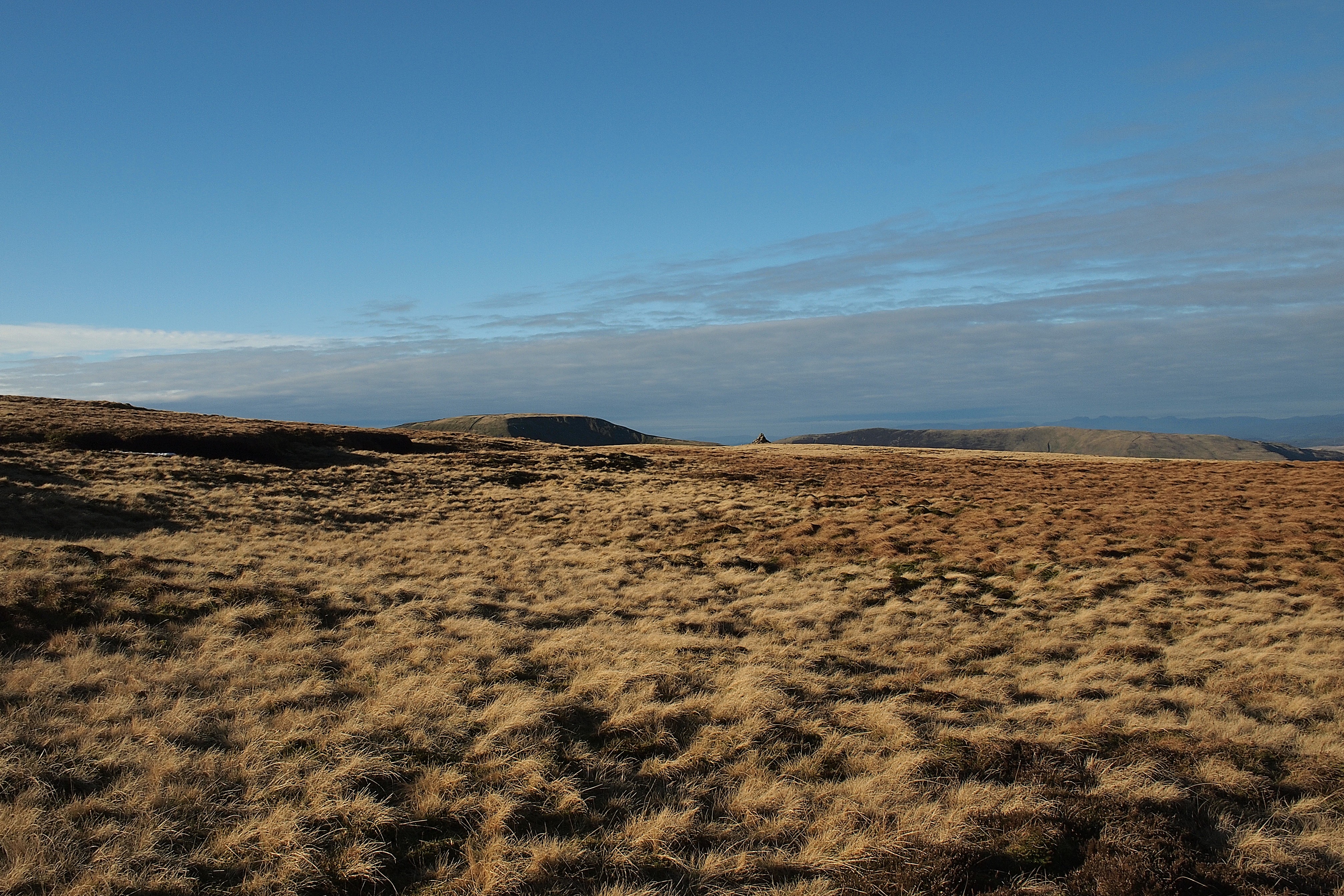 On the the Craven Way/Dales Highway we turned right and followed it back to Ribblehead, 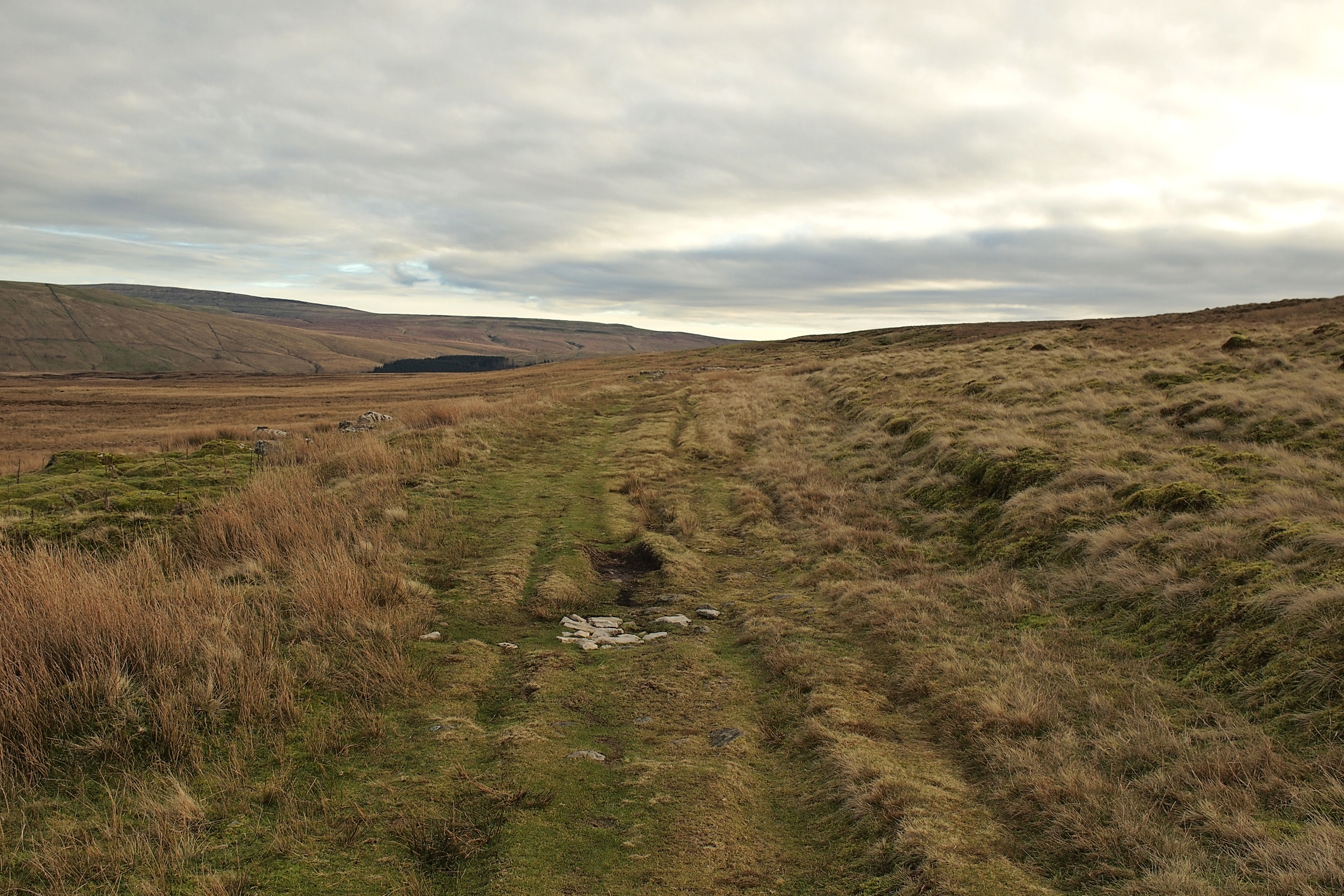 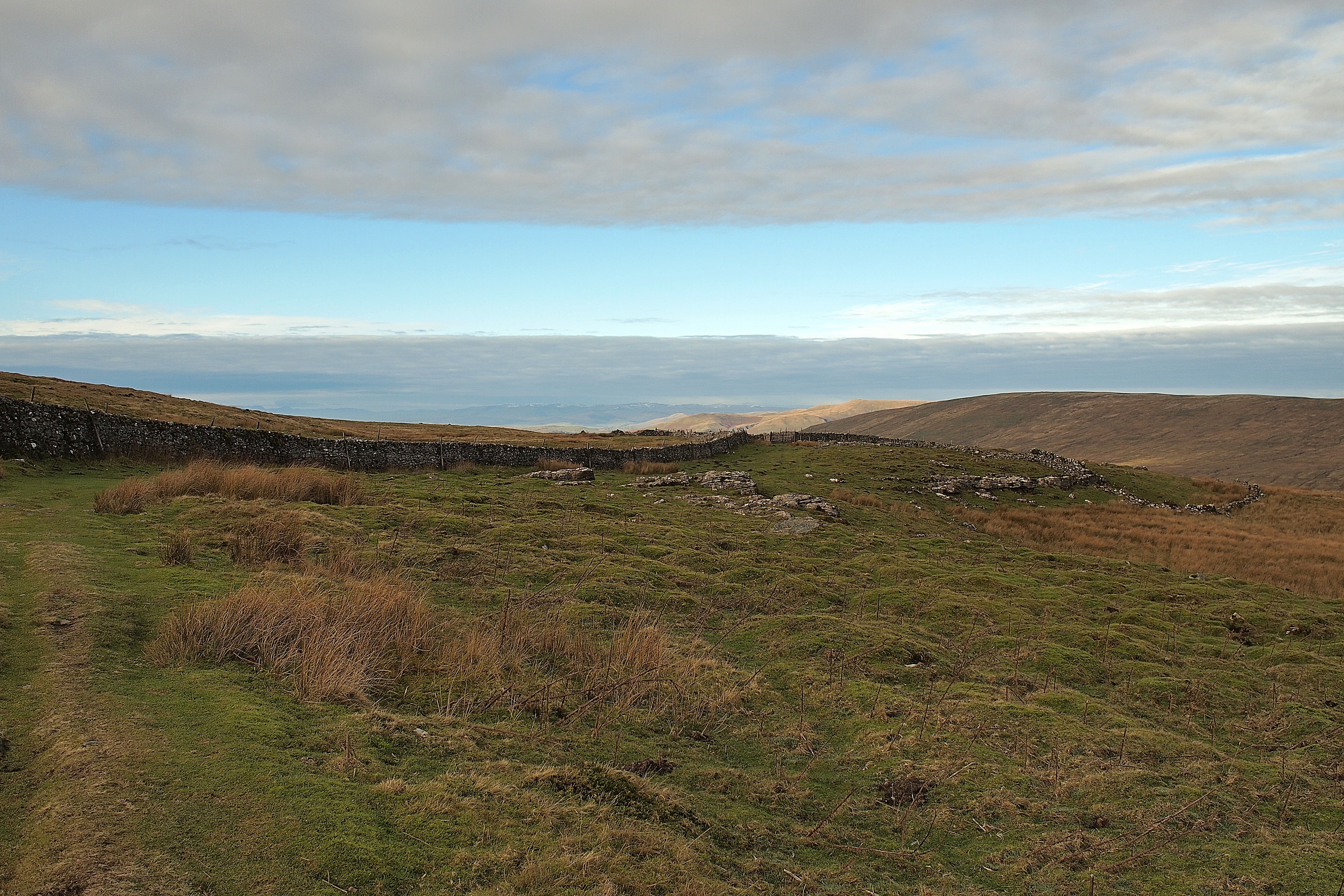 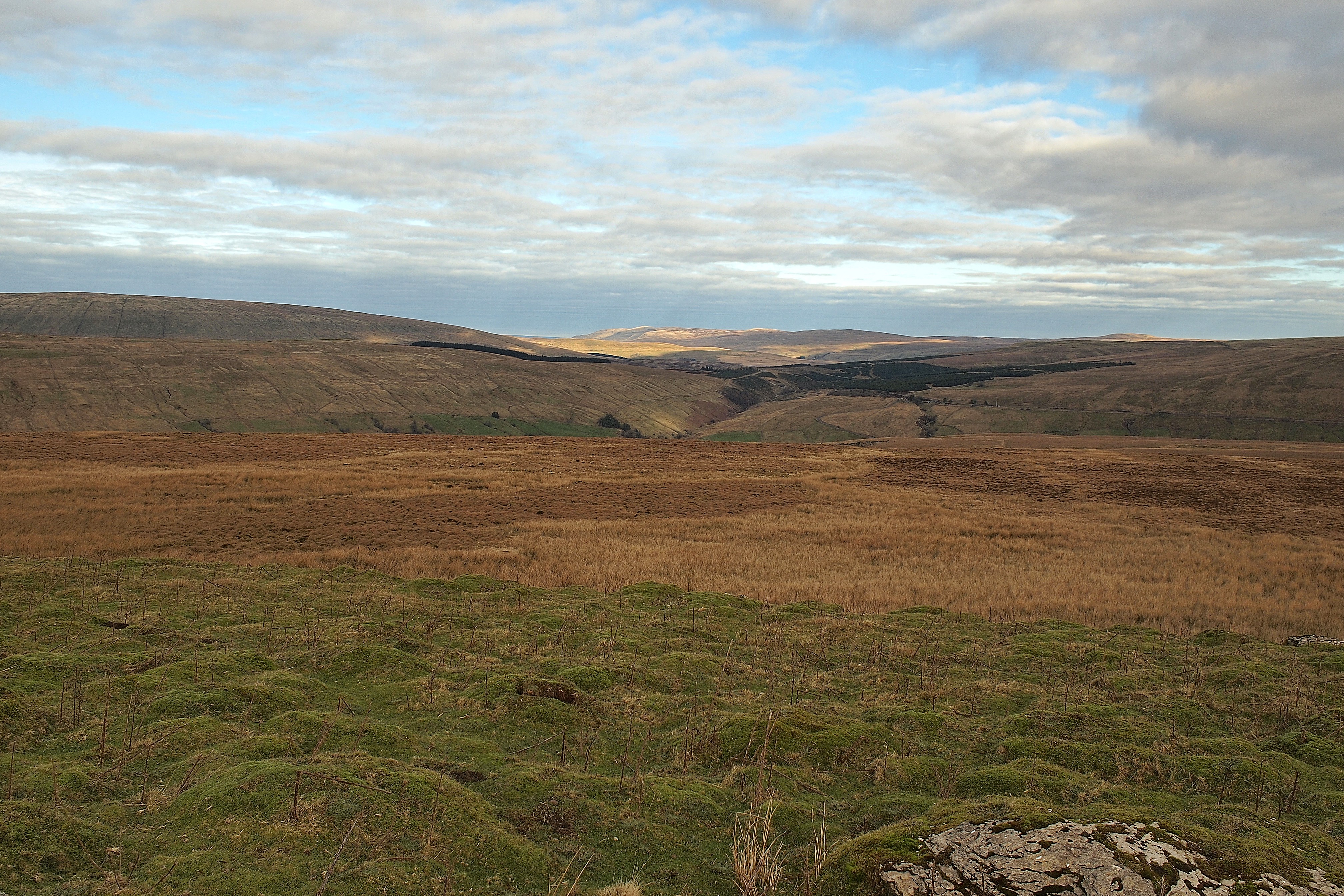 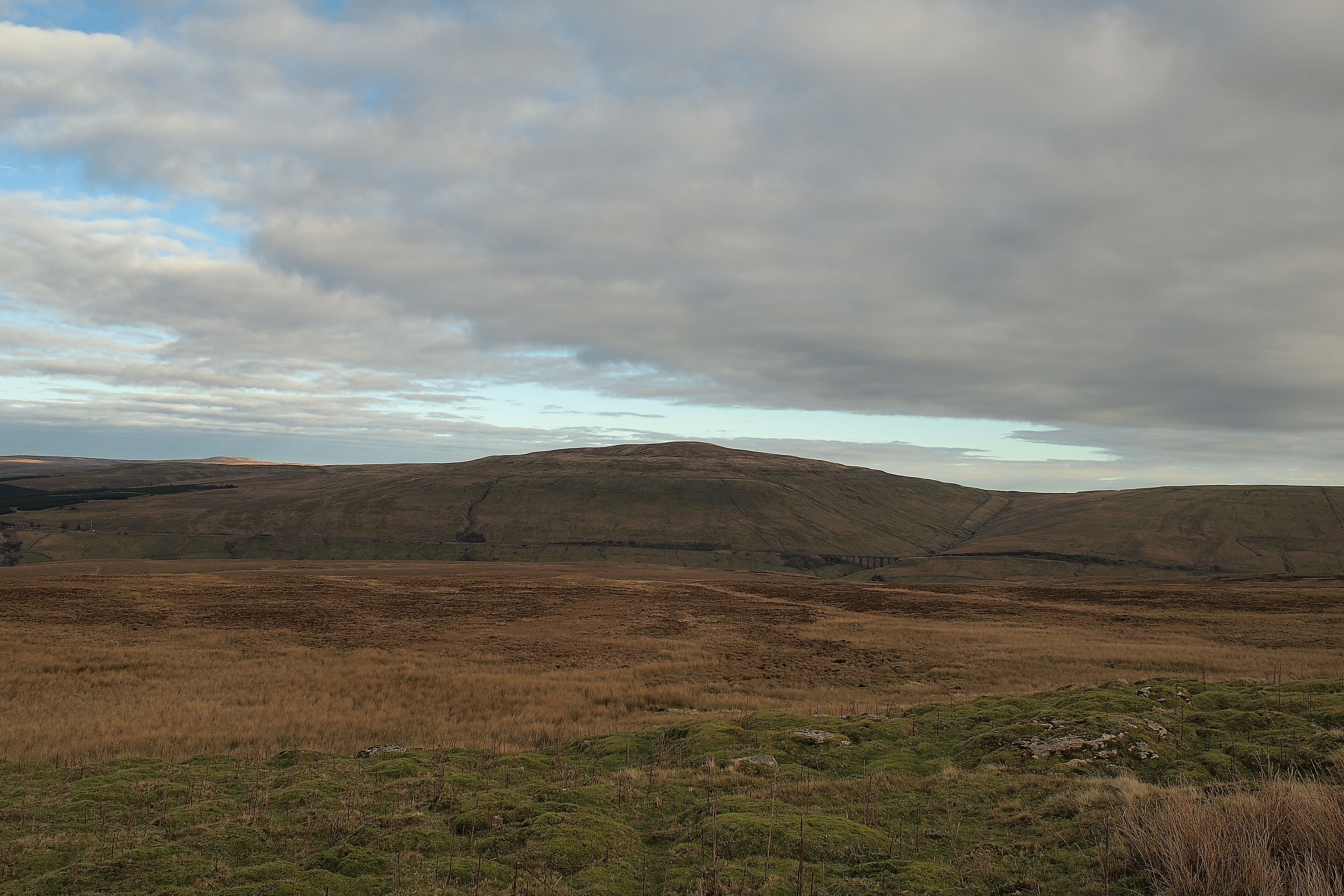 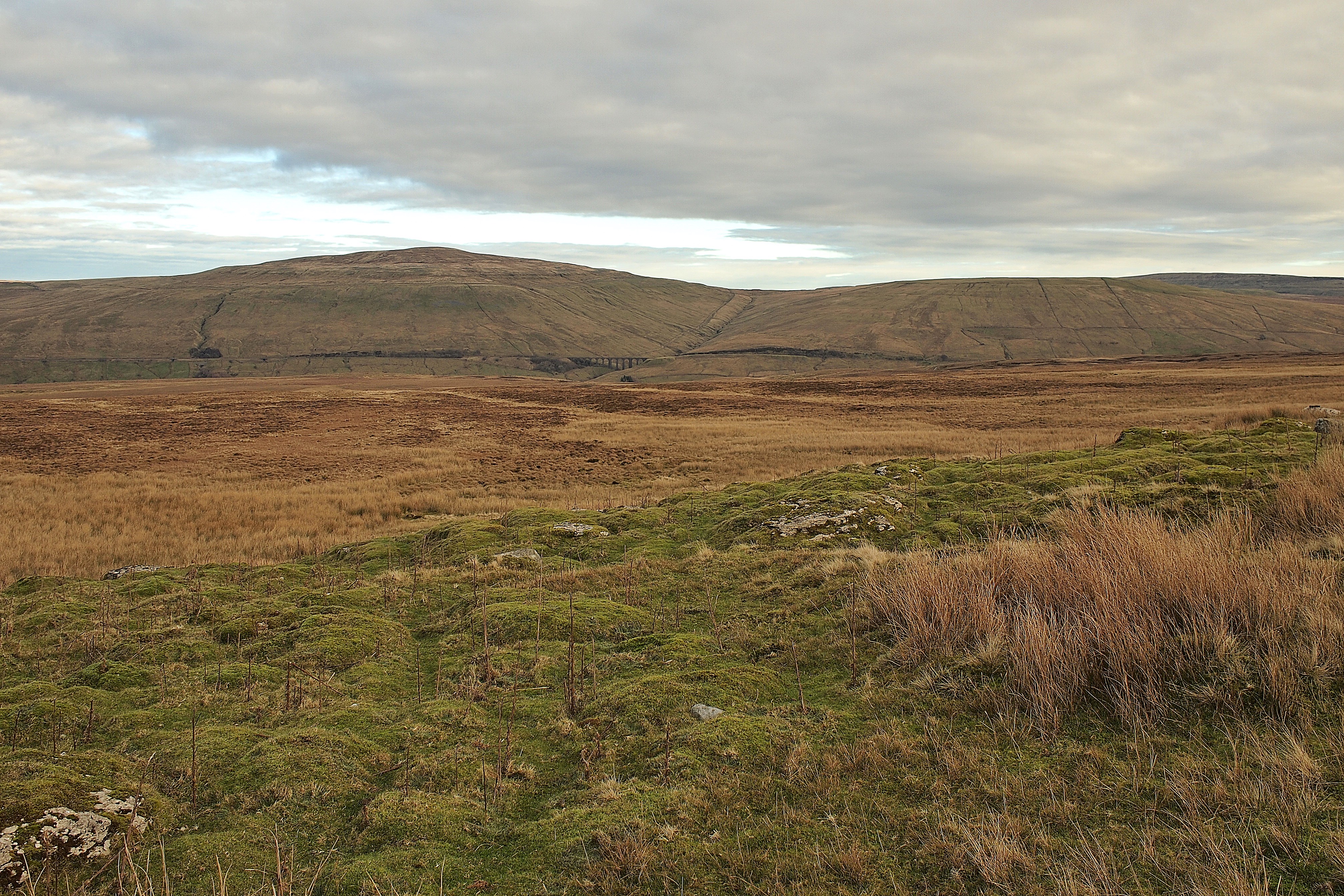 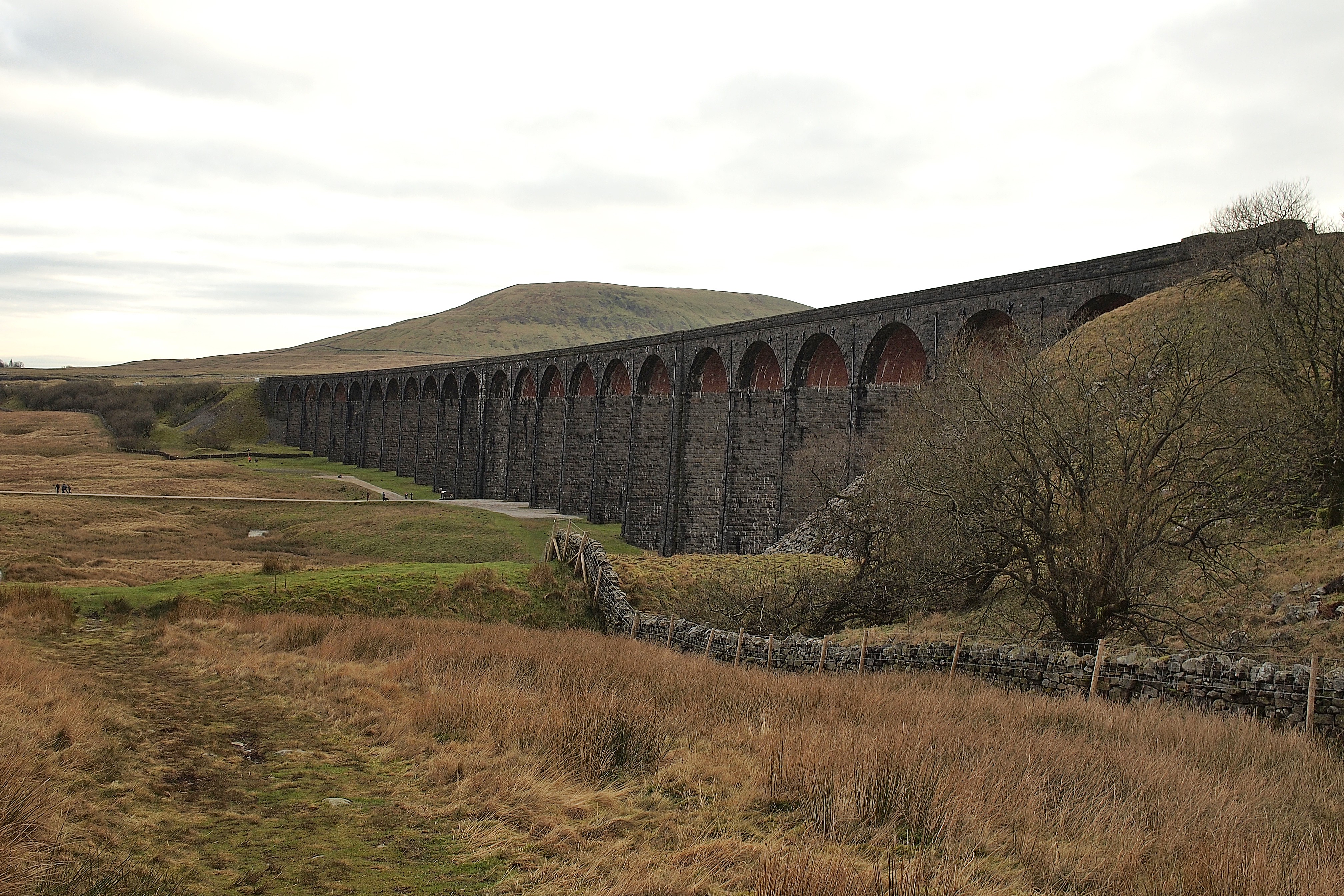 A nice day out including Whernsides quieter side

Three nice tops to finish off with.

Kendal Double, contenders for the easiest fells in Lakeland