Three nice tops to finish off with.

After a bit of thought we made the decision to find out what the Howgills had to offer, we'd always promised ourselves a trip or two to see what they were like every time we drove north to Scotland or the Lakes on the M6, those lumpy hills to the right above Tebay looked very inviting, especially when we could see tracks up them. We had had a couple of forays in the past but never really took them seriously because we had other goals to obtain, now we'd accomplished one of them the time had come to explore new territories.

We started our explorations in May 2020, which were subdued a little due to Covid 19, we had to watch the ongoing lockdowns to make sure we were not doing something weren't supposed to do but we managed to do some very nice walks when we could.

As we ticked off the main tops the area was getting smaller, I started planning our final tops to do in a day. When we were on Arant Haw on one of our days out, I spotted three contenders we could do at any time of the year so they were instantly put aside for such an occasion. Our weekend stay around Kendal was ideal so the plan was put into motion, the forecast was good except for a strong chilly wind, the conditions weren't anything we hadn't had in the past so now was the time to finish them off.

So, the Tops we visited today were:-

We parked up in the Joss Lane car park in Sedbergh made ready and were off up the lane following the Dales High Way and into the hills, it was a lovely bright autumn day, we were looking forward to our time out in the quiet Howgills.

It was a steady climb, the views were getting better, Arant Haw was dead ahead, we debated whether to include it but decided to concentrate on our intended. 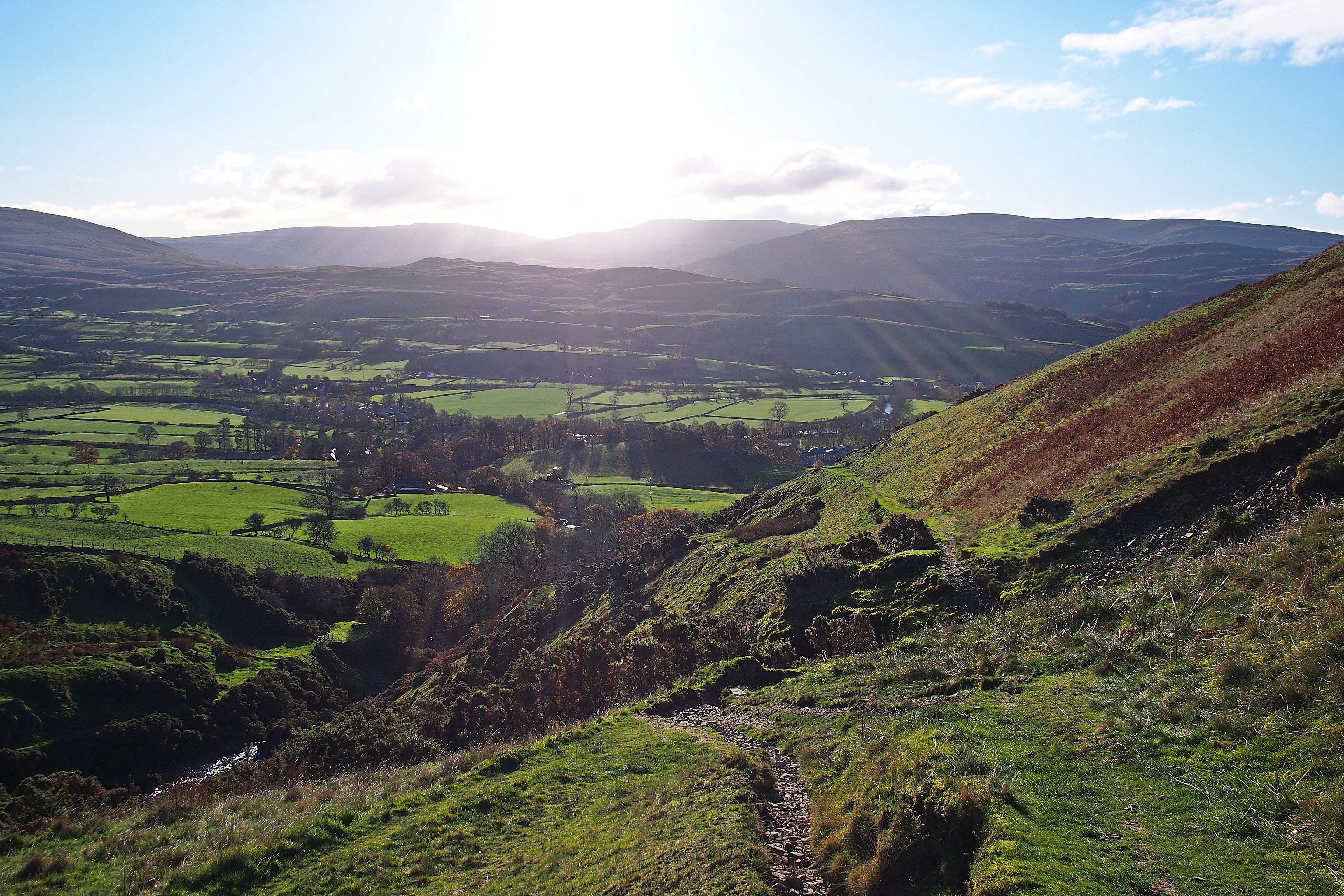 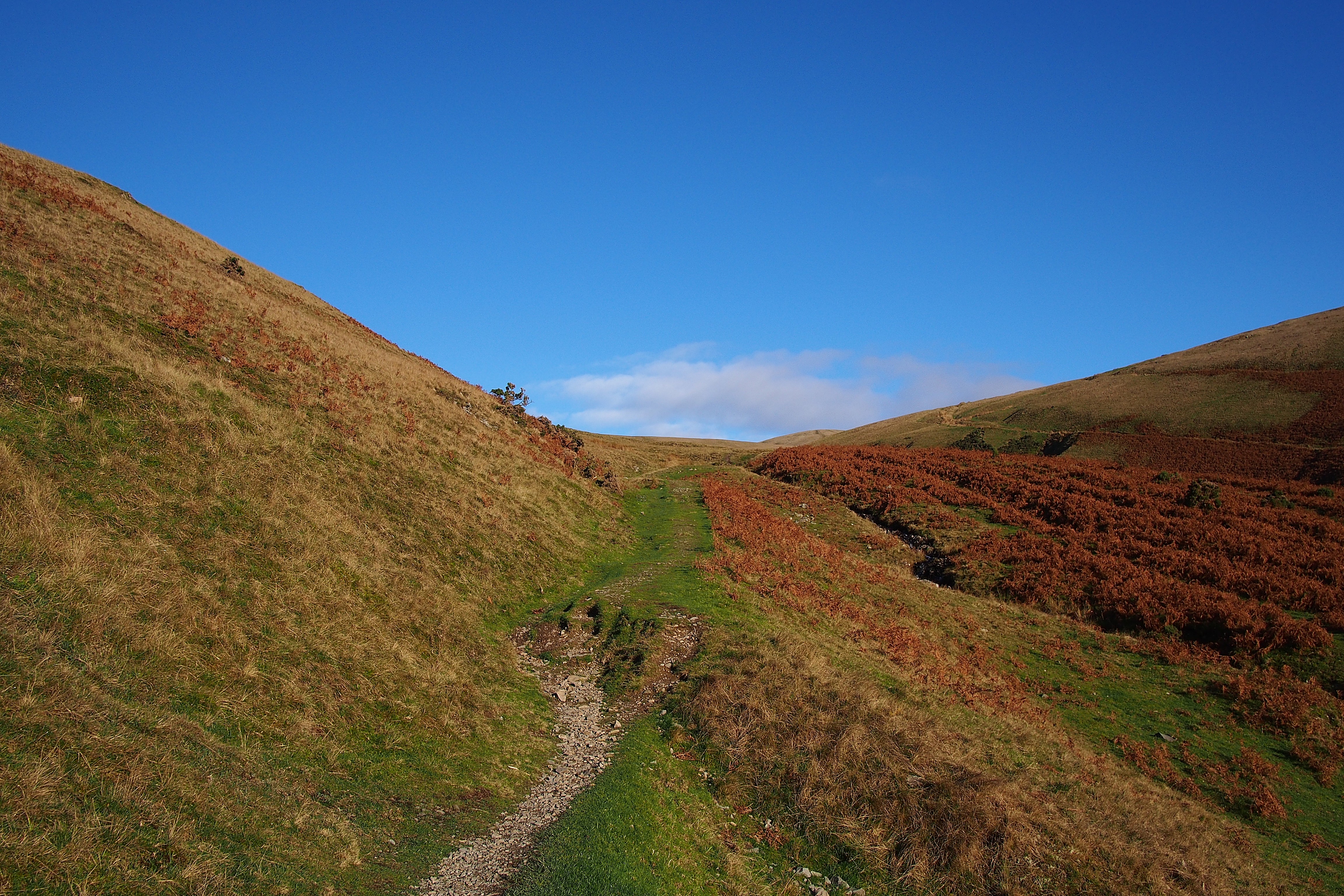 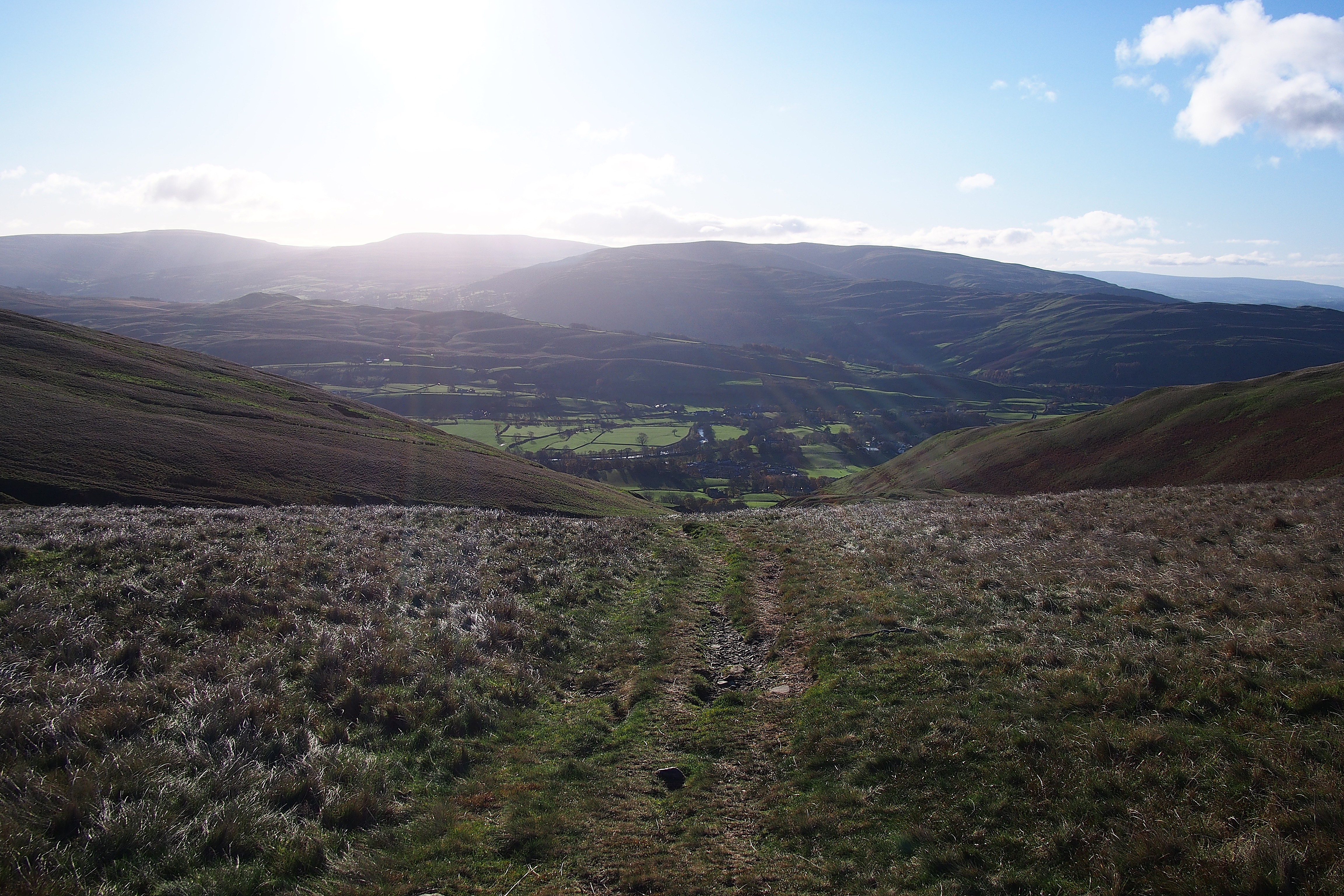 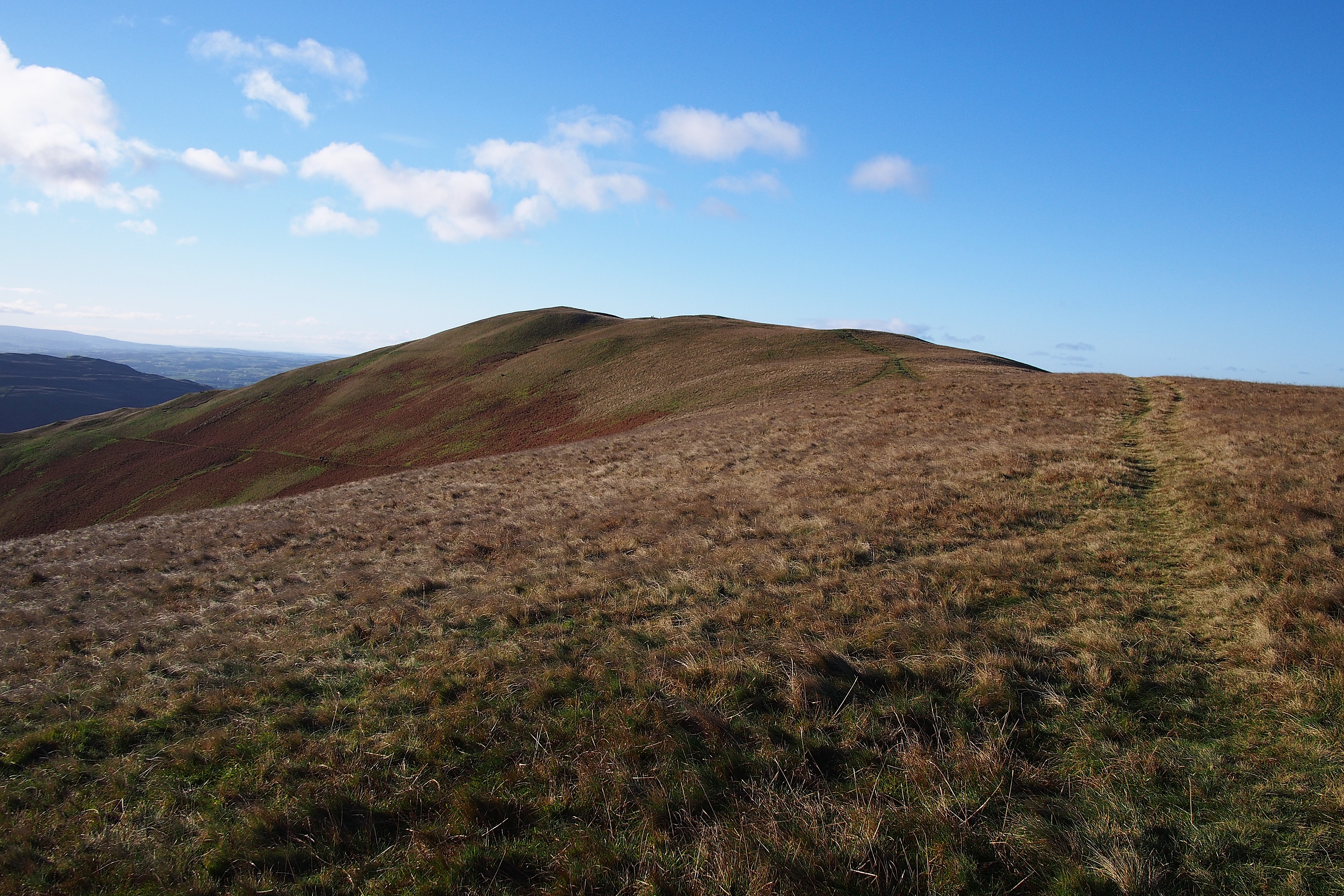 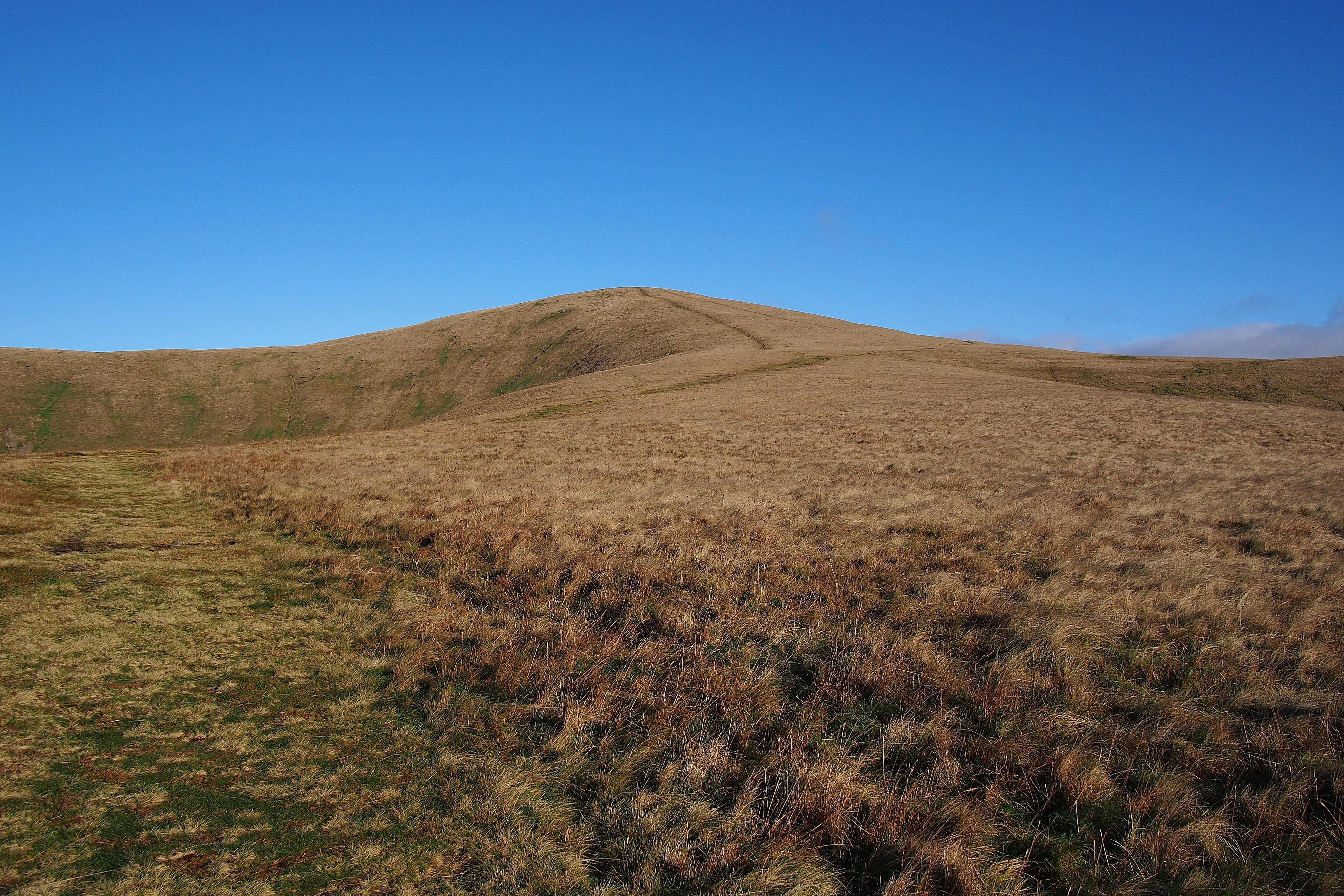 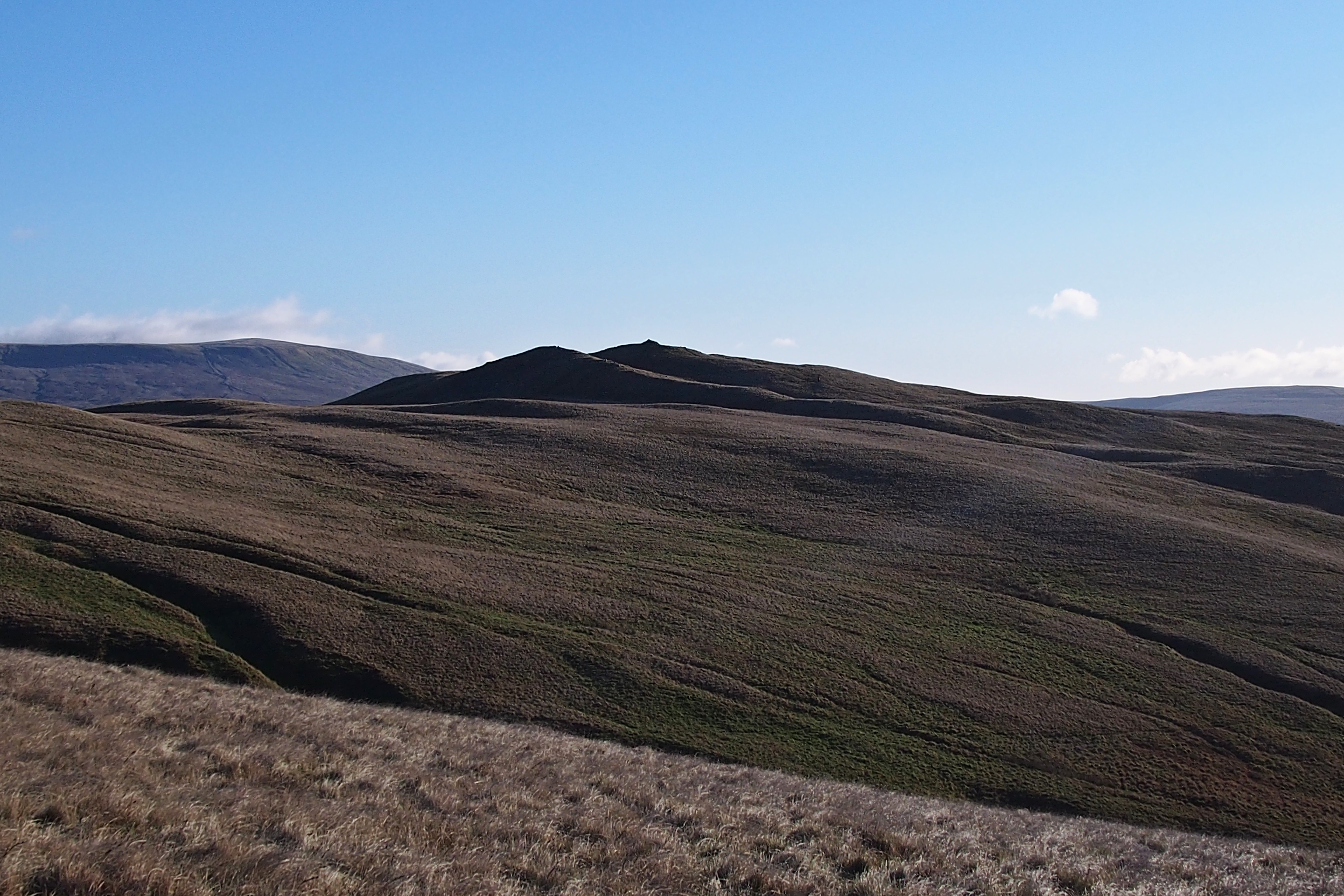 We stayed on this path until we reached a quad track heading down to Sickers Fell starting just above Hobdale Scar.

On the way we were getting some nice clear views of the Lake District mountains. 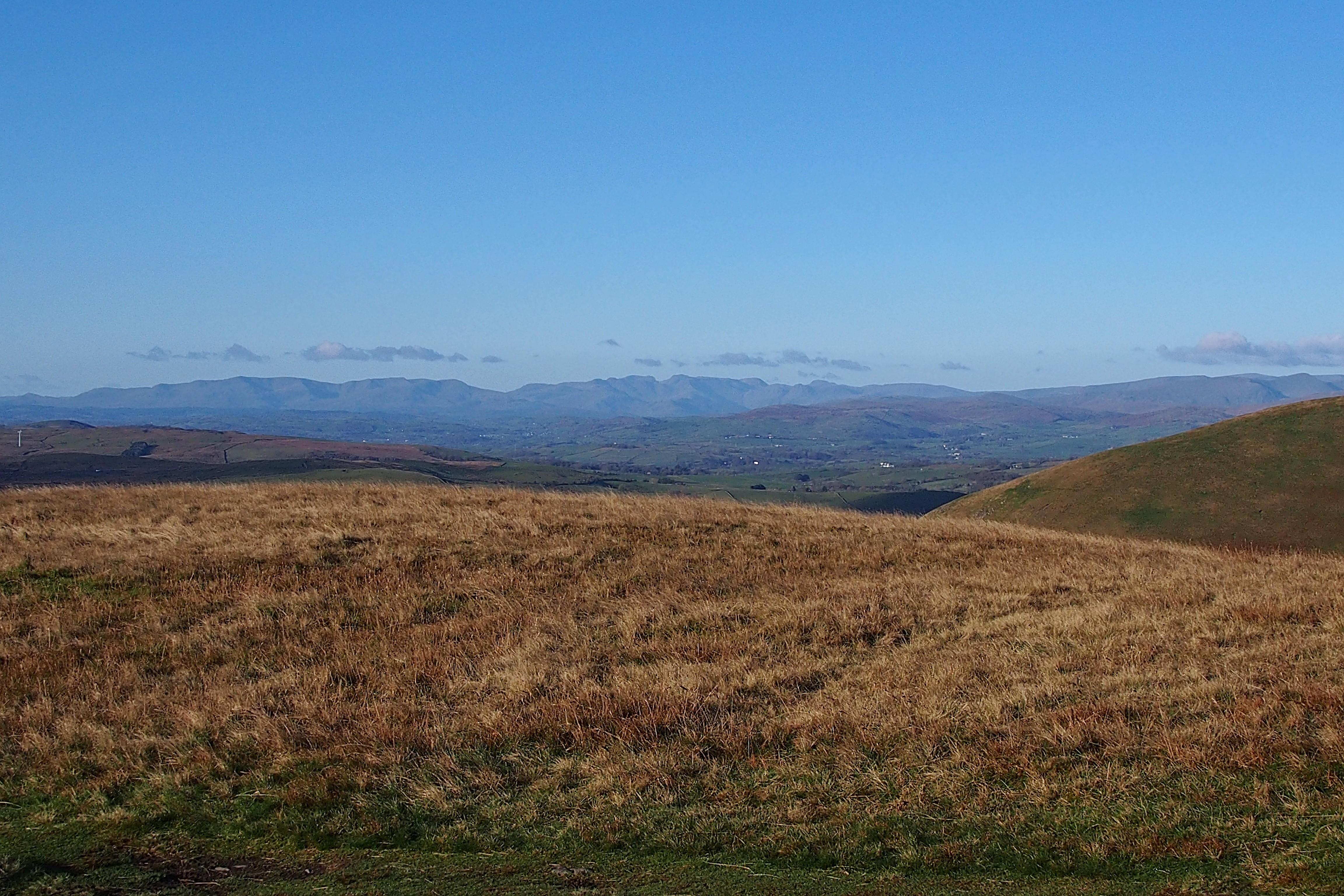 Our targets were in view for most of the way except for Knott which remained elusive until we were almost ready to descend towards Sickers Fell.

At the turn off point our objectives looked a long way off, but, as we'd become accustomed to this in the Howgills where distances are deceptive, we hoped this would be the case, we set off down and I was surprised on this occasion that from the turn off point it only took ten minutes to arrive at the top of Sickers Fell 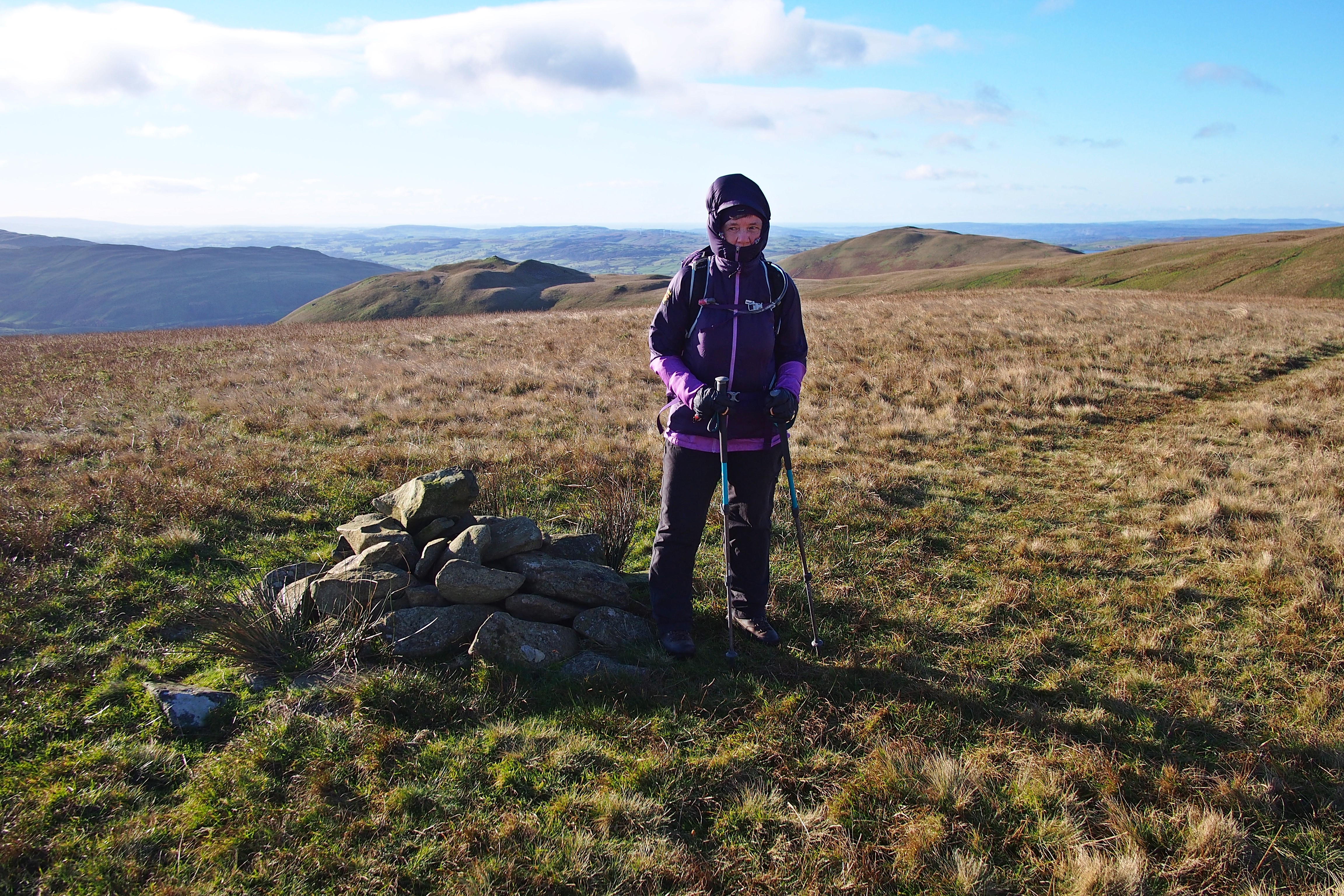 This Fell has good views of the higher fells to the north and over to Crook, Baugh Fell looked interesting, another hill on the agenda 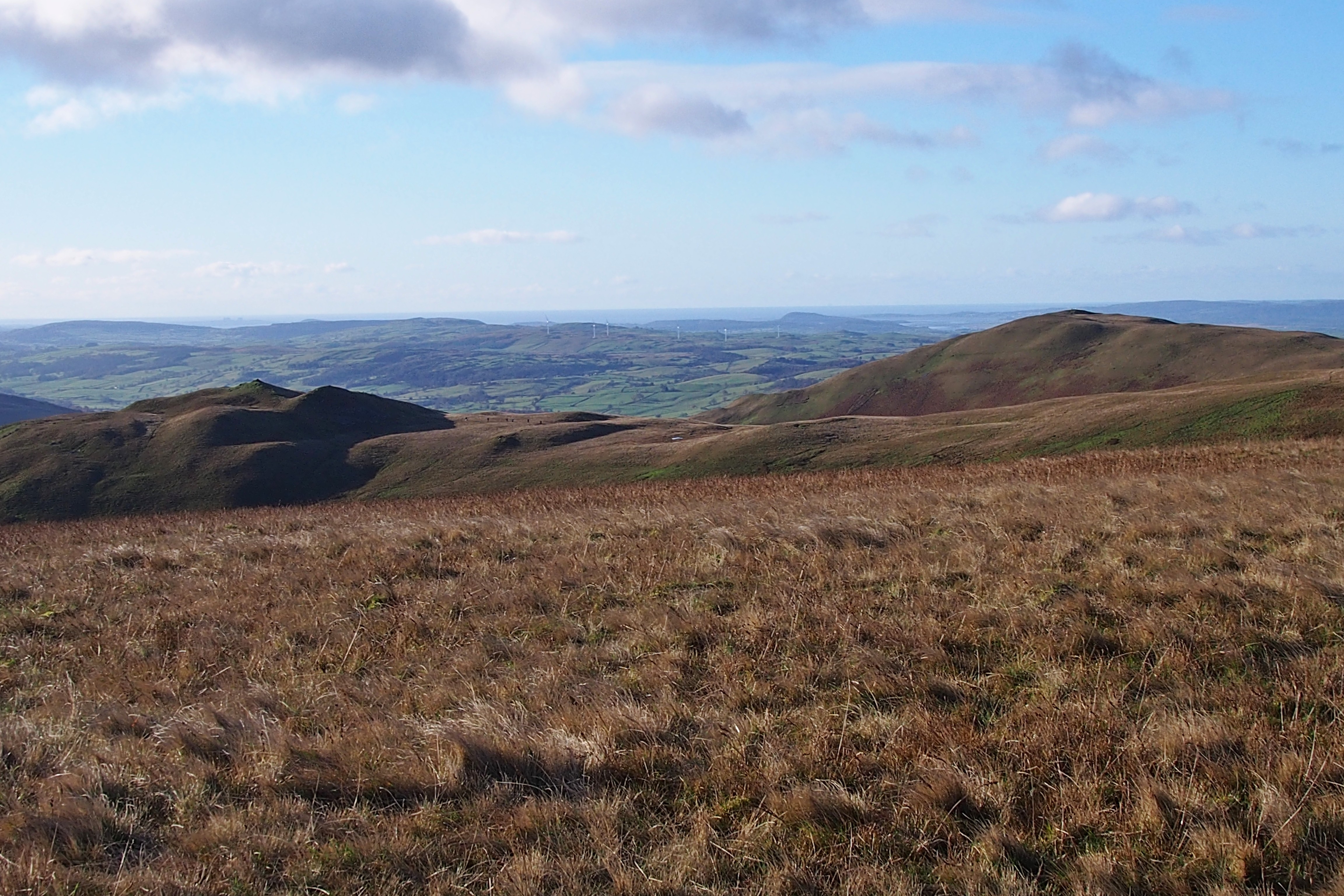 Looking down to Knott it still looked a good way away so after a few photos and a bite to eat we were off down a narrow track towards Knott.
This little track was quite steep initially, on the way down Knott was looking a lot closer, we could see the path continuing up the hillside looking less steep as we descended. From Sickers Fell to Knott takes about fifteen minutes, I reckoned about half an hour so, I was miles off, it's surprising how far you can travel in a short amount of time in the Howgills 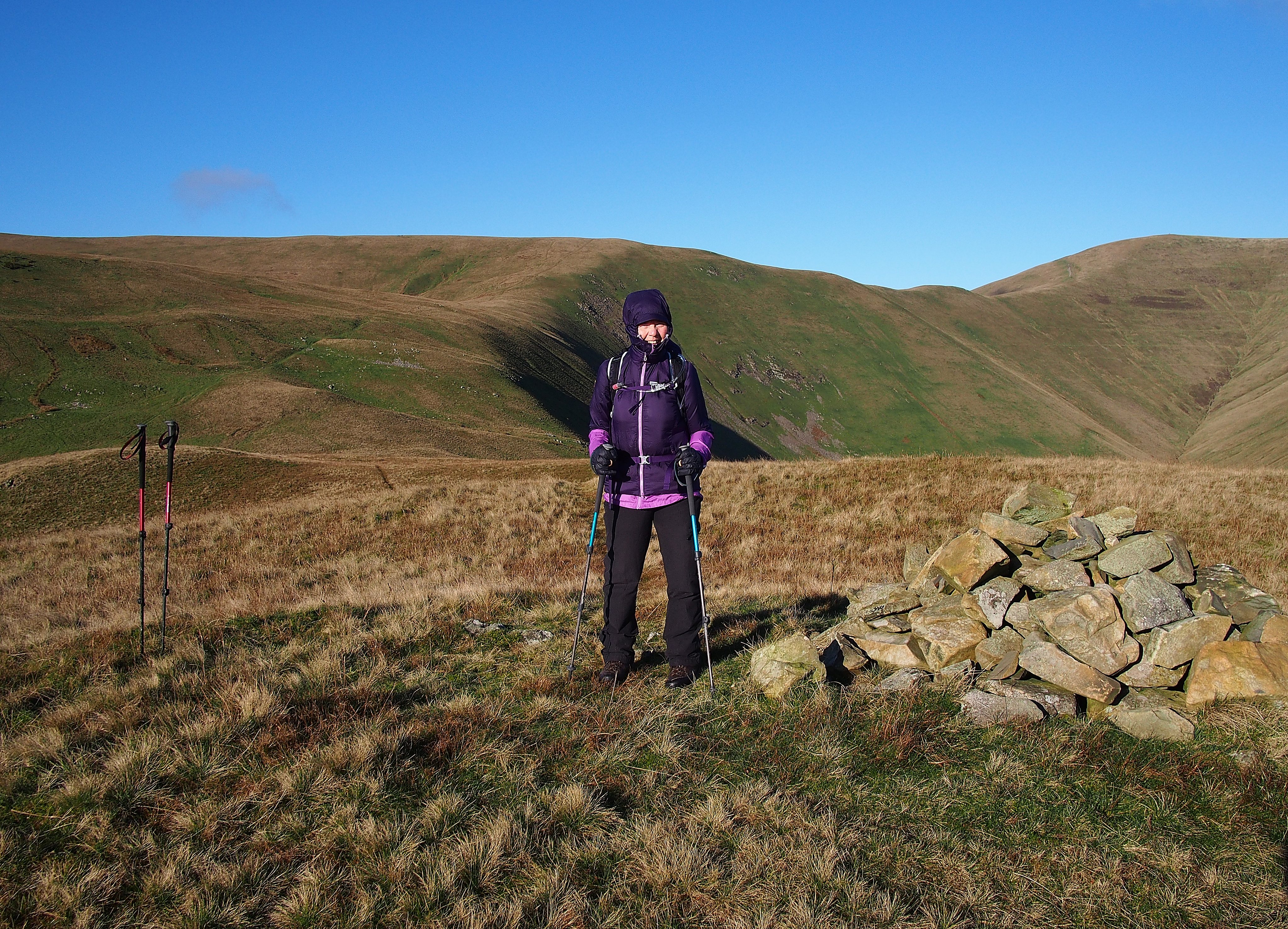 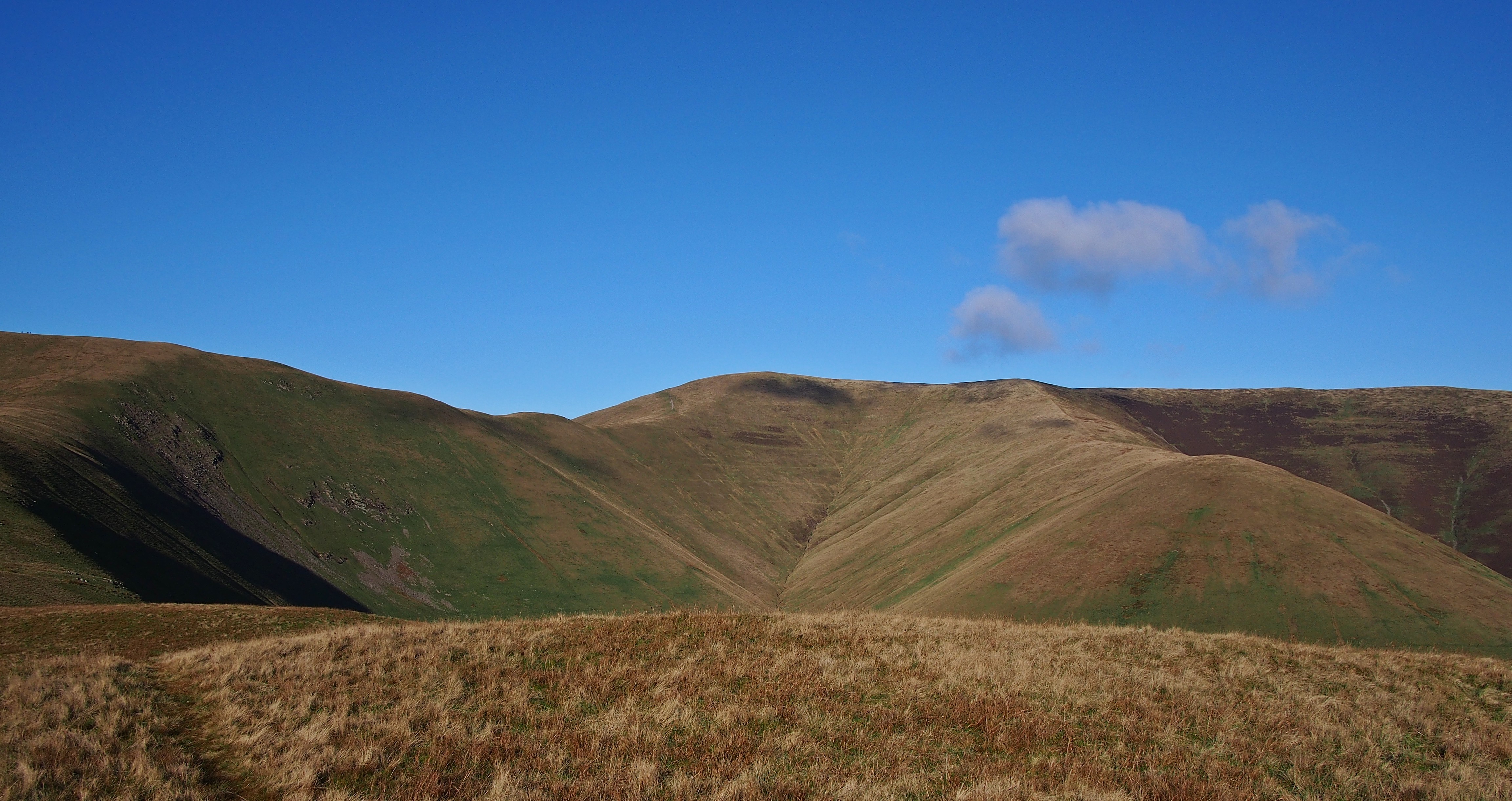 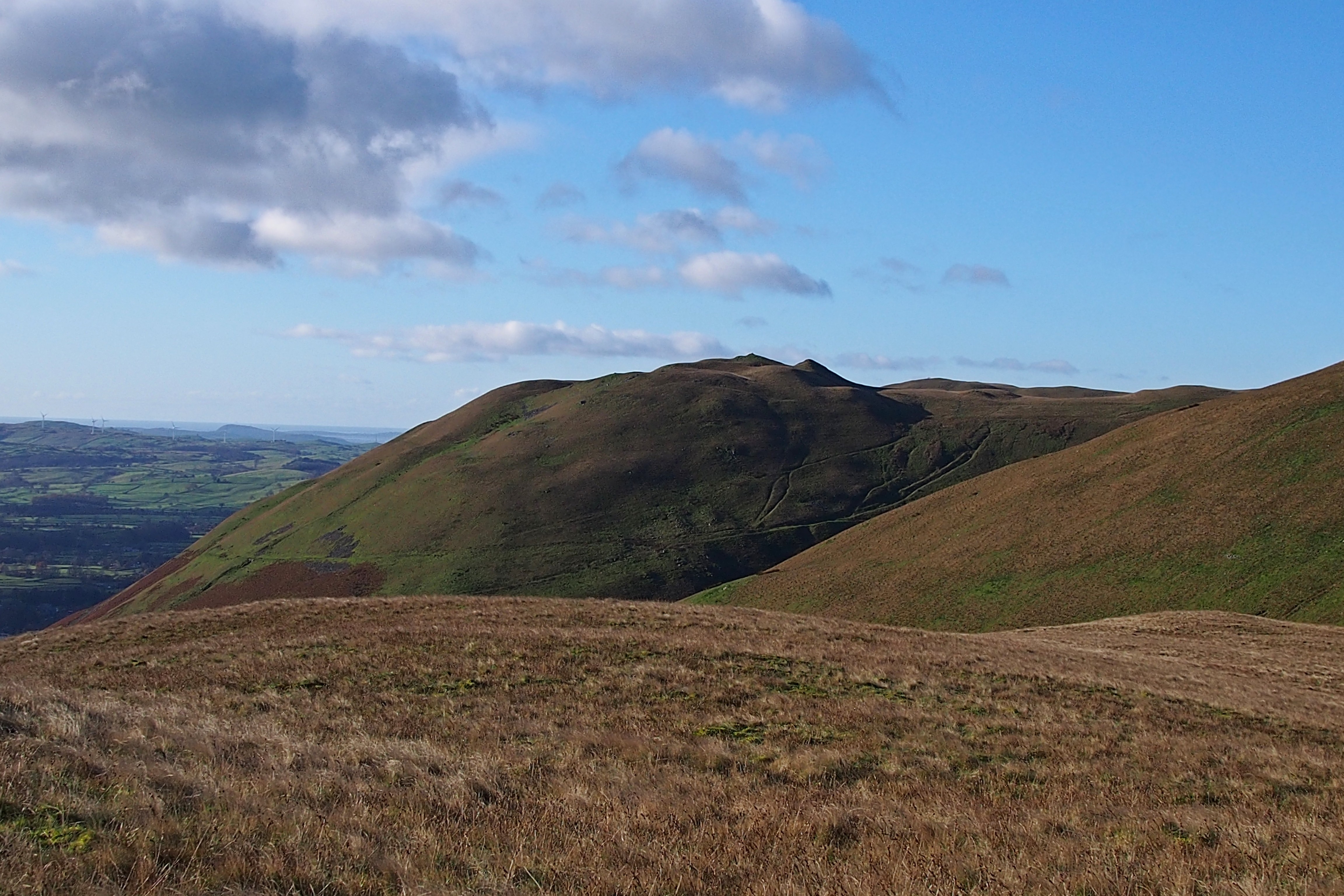 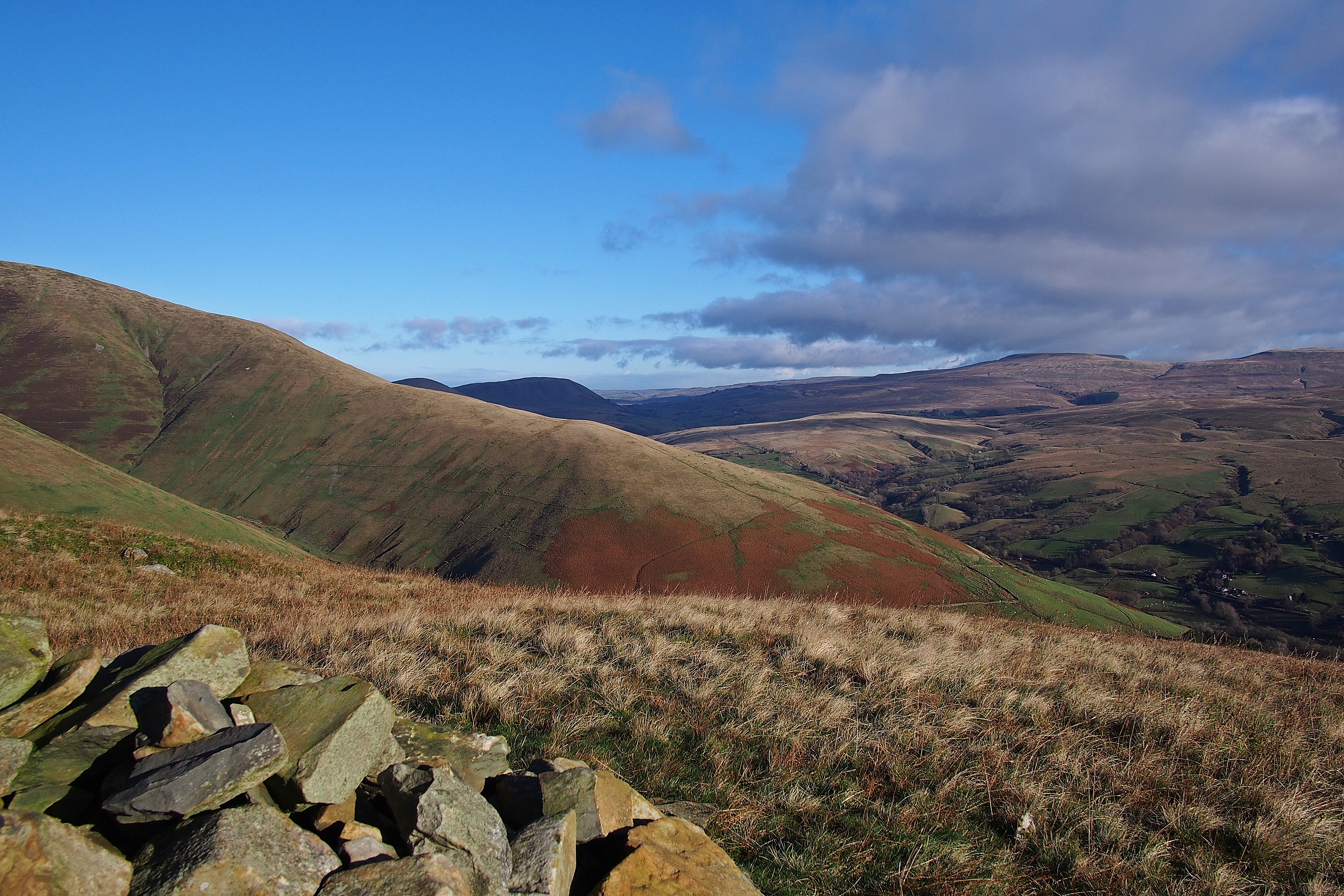 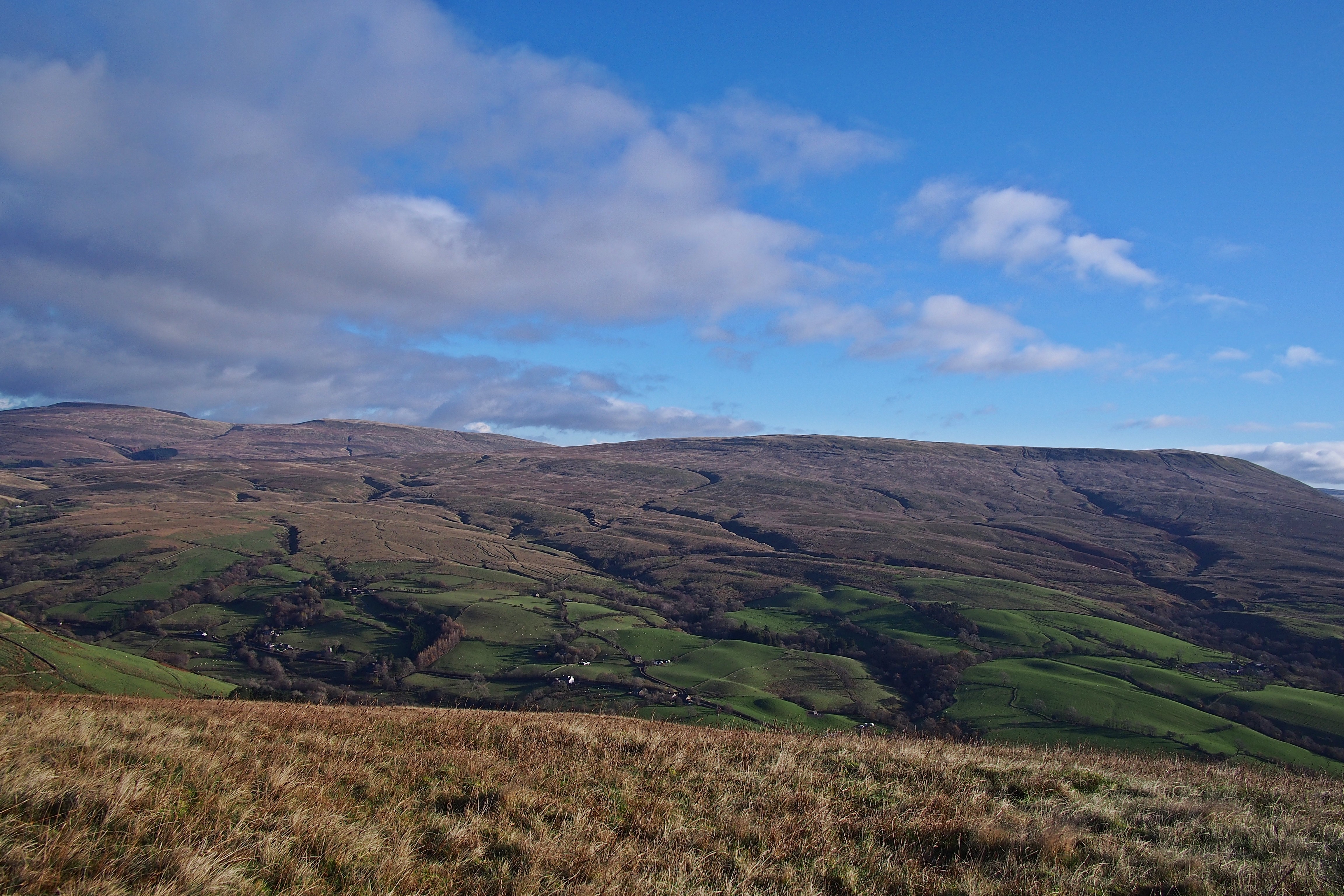 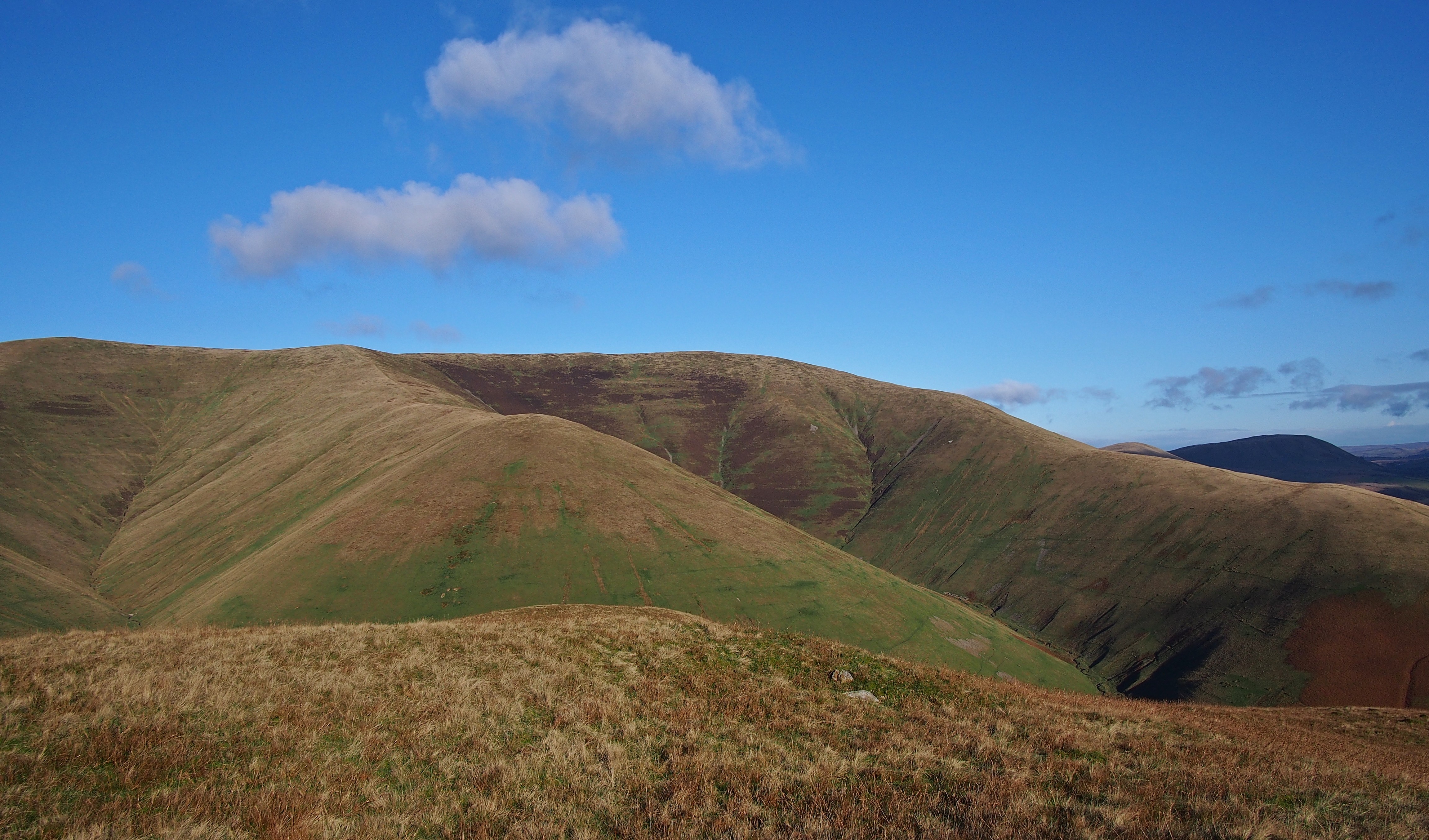 We decided to do an out and back from the main path before we tackled Crook, from Knott our return was surprisingly steep in parts, we were flagging a bit by the time we arrived back on it.

Our way back to the main path We could see a few more people on the hills, especially on Winder, we met a couple about to do what we'd done, we had a quick natter then they were off hurrying after their dog, I bet their timing was a lot quicker than ours

We retraced our route until we reached a path coming down from Arant Haw, I'd looked at this on the way up and noted that it continued towards Crook so we tuned left here and set off for Crook.
It didn't take us long to get to the top, there's a little steep bit just before the large summit cairn, once there it commands some lovely views. 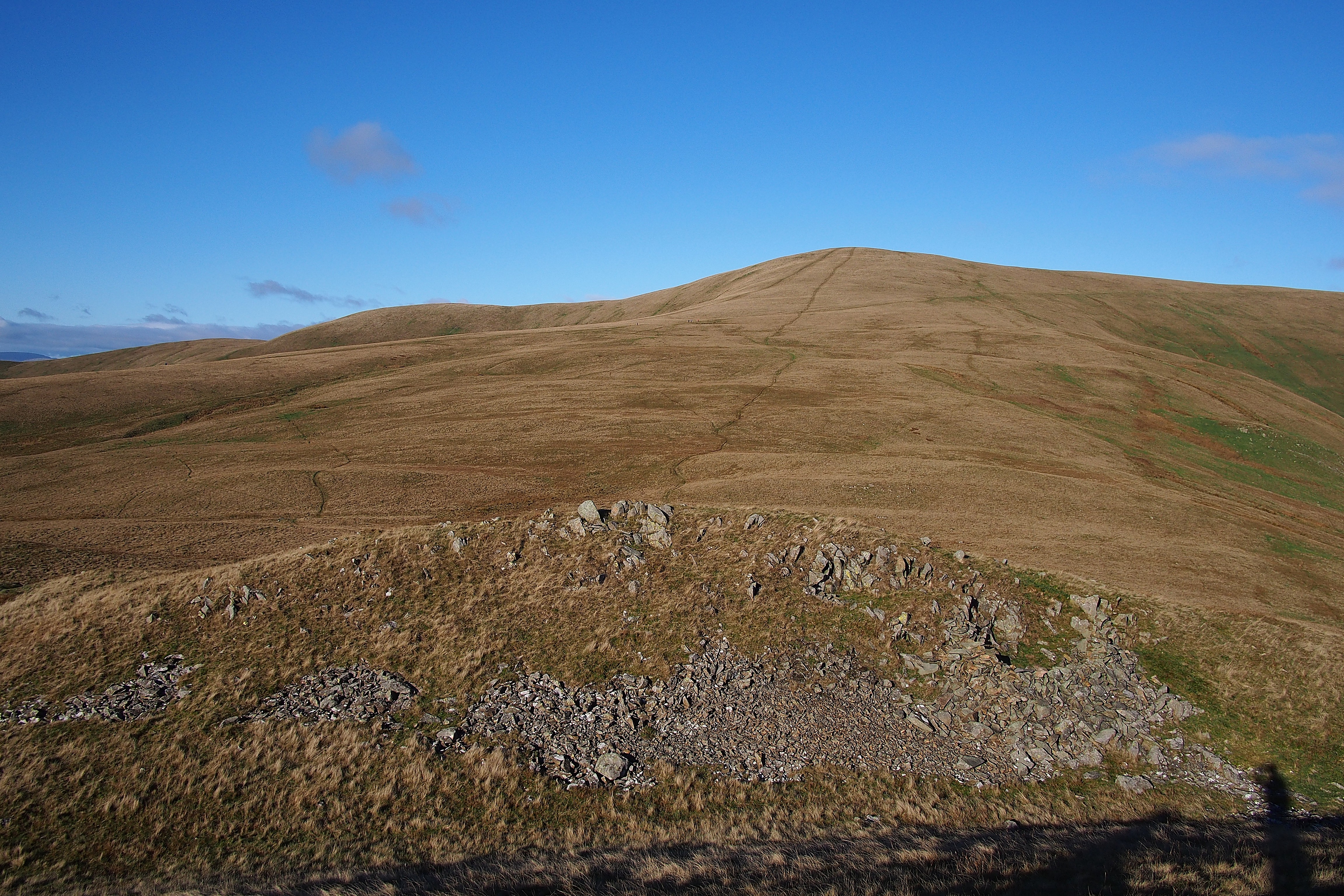 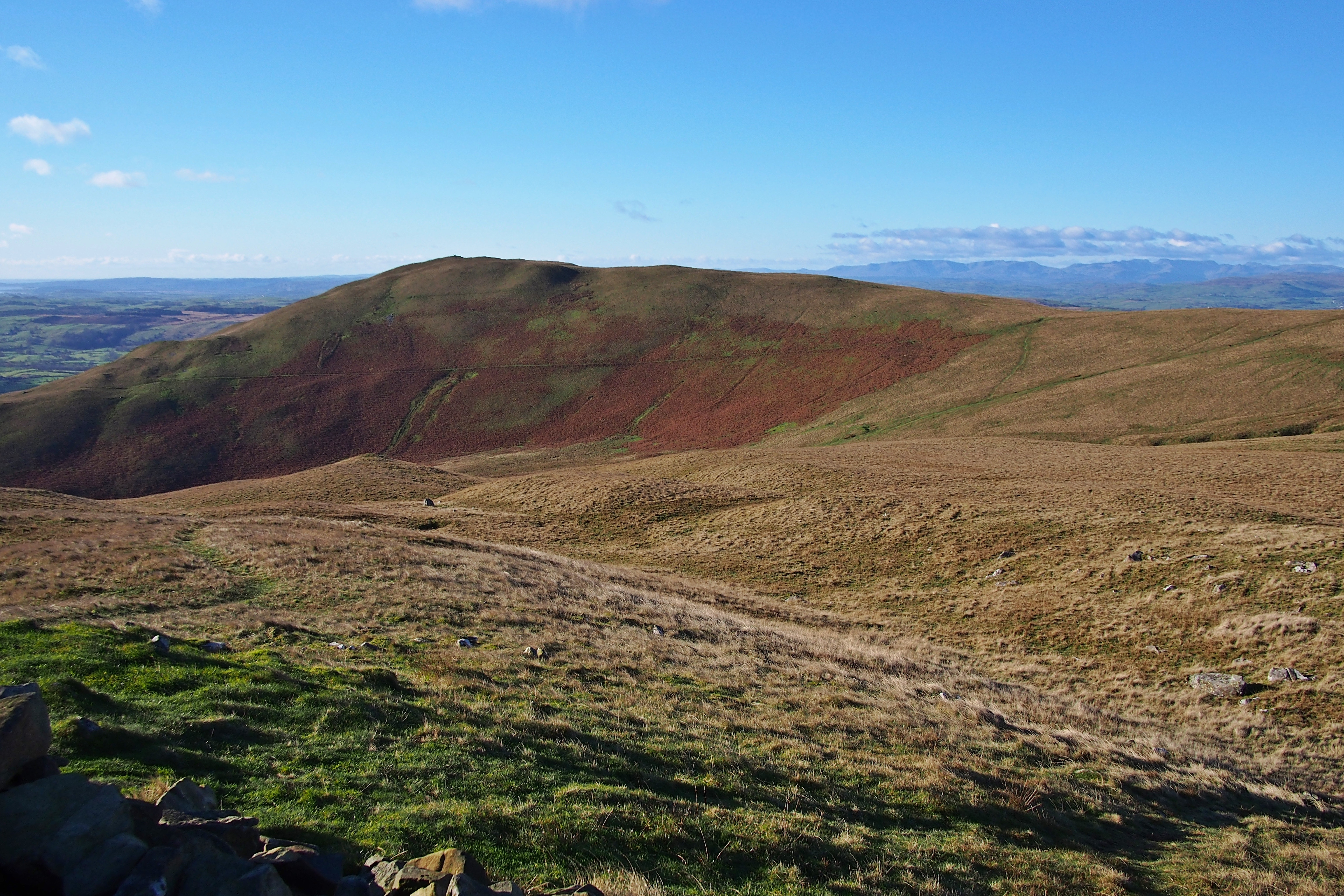 We had a longer break before we started back down to Sedbergh, from the top we could see several tracks heading towards the Dales Highway path so it was a case of setting off on one and see where it takes you.
Our path took us down towards Settlebeck Gill and crossed it just above the waterfall marked on the map, from there it soon joins the Dales Highway, with this being a good established path, we were soon back on the lane leading to the
car park. 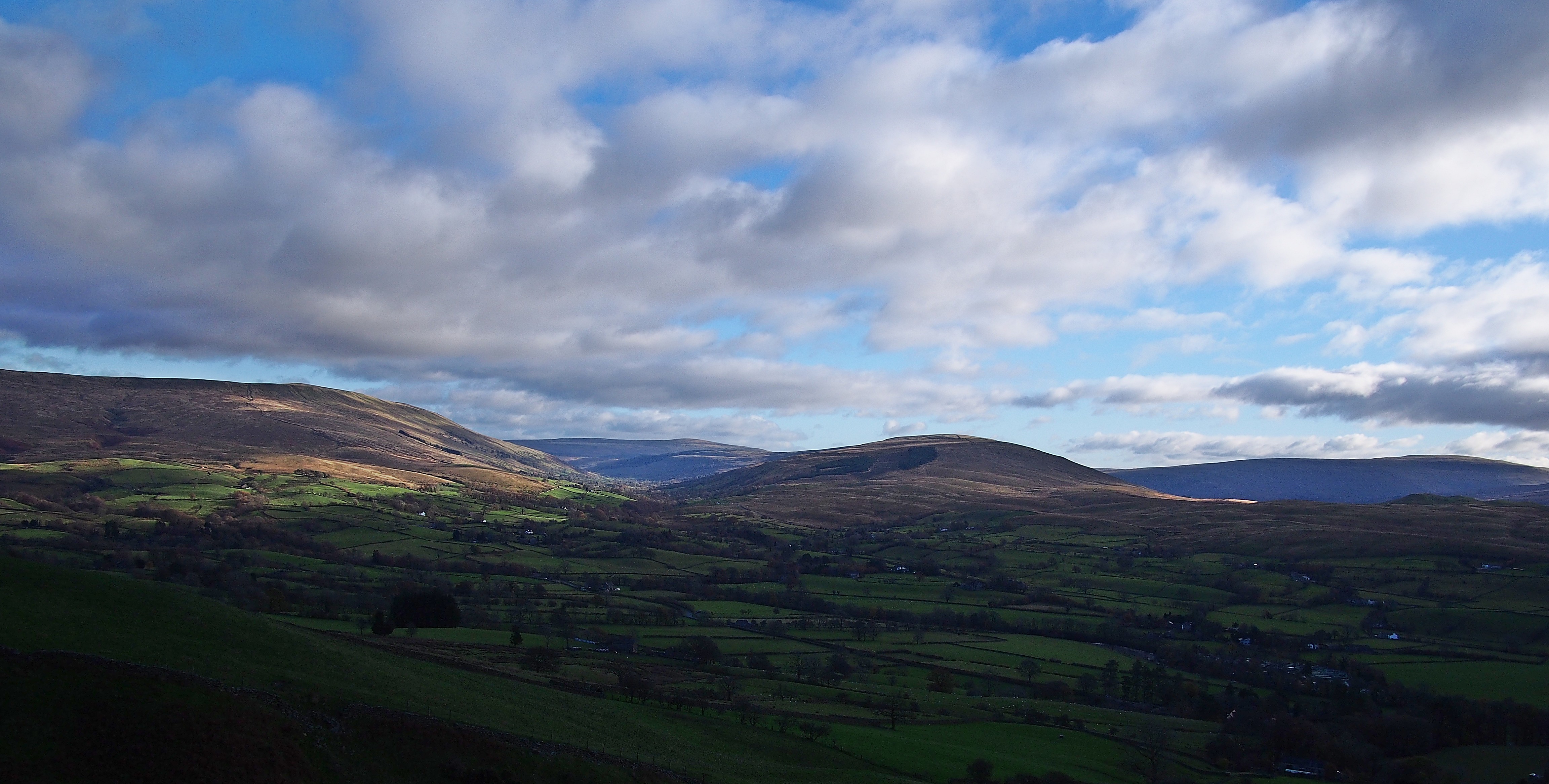 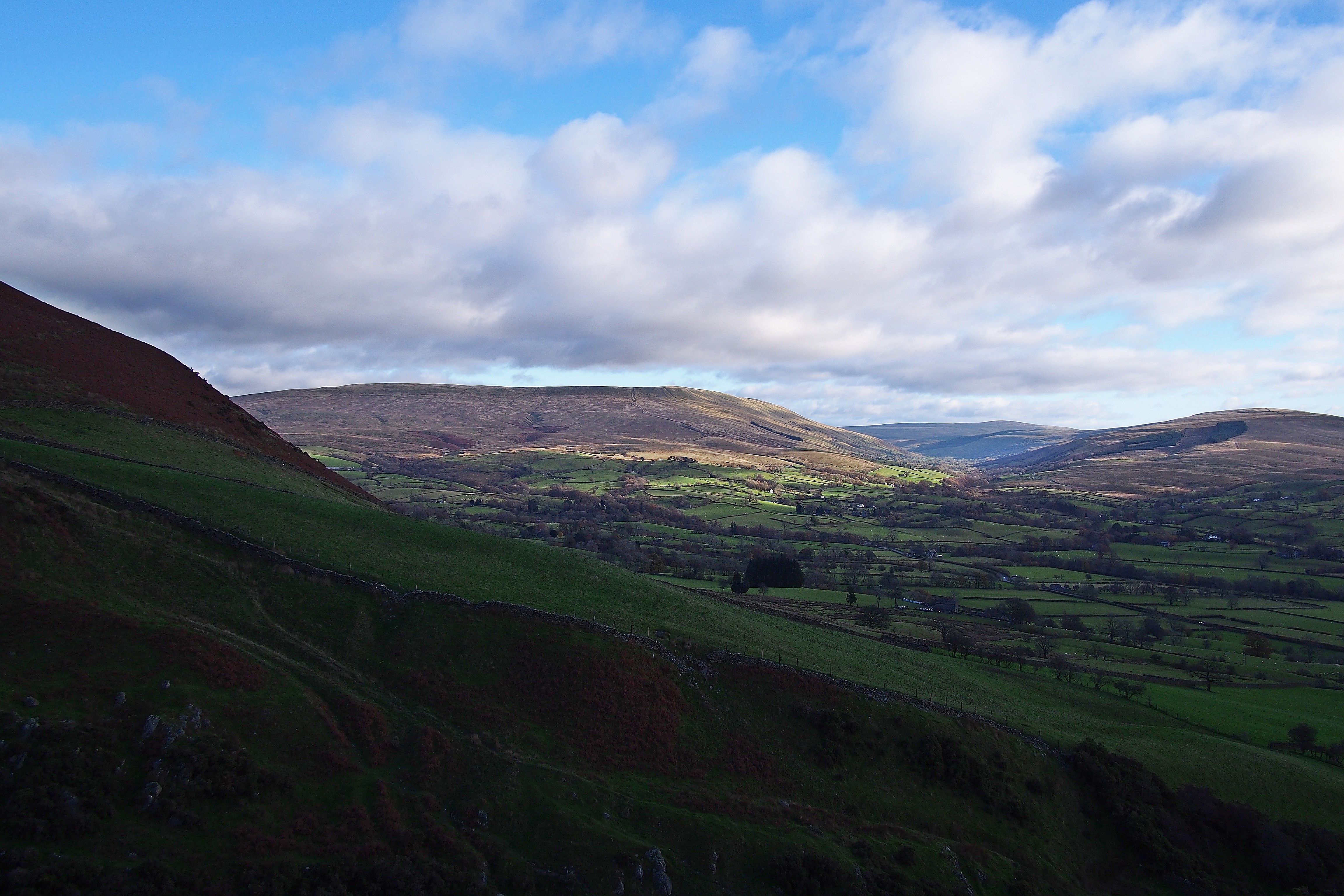 On the way down we spotted this group of fungi, a world in miniature 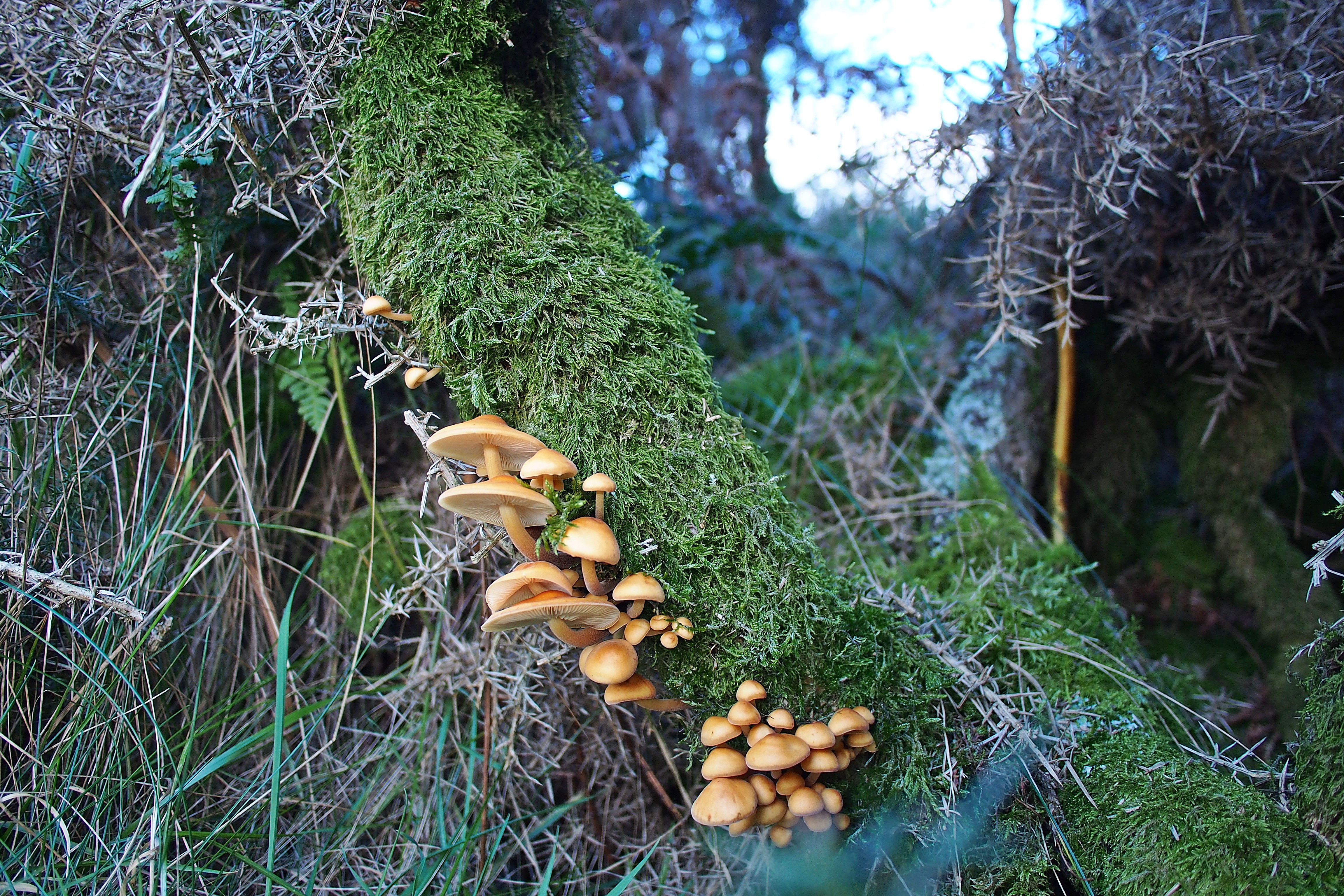 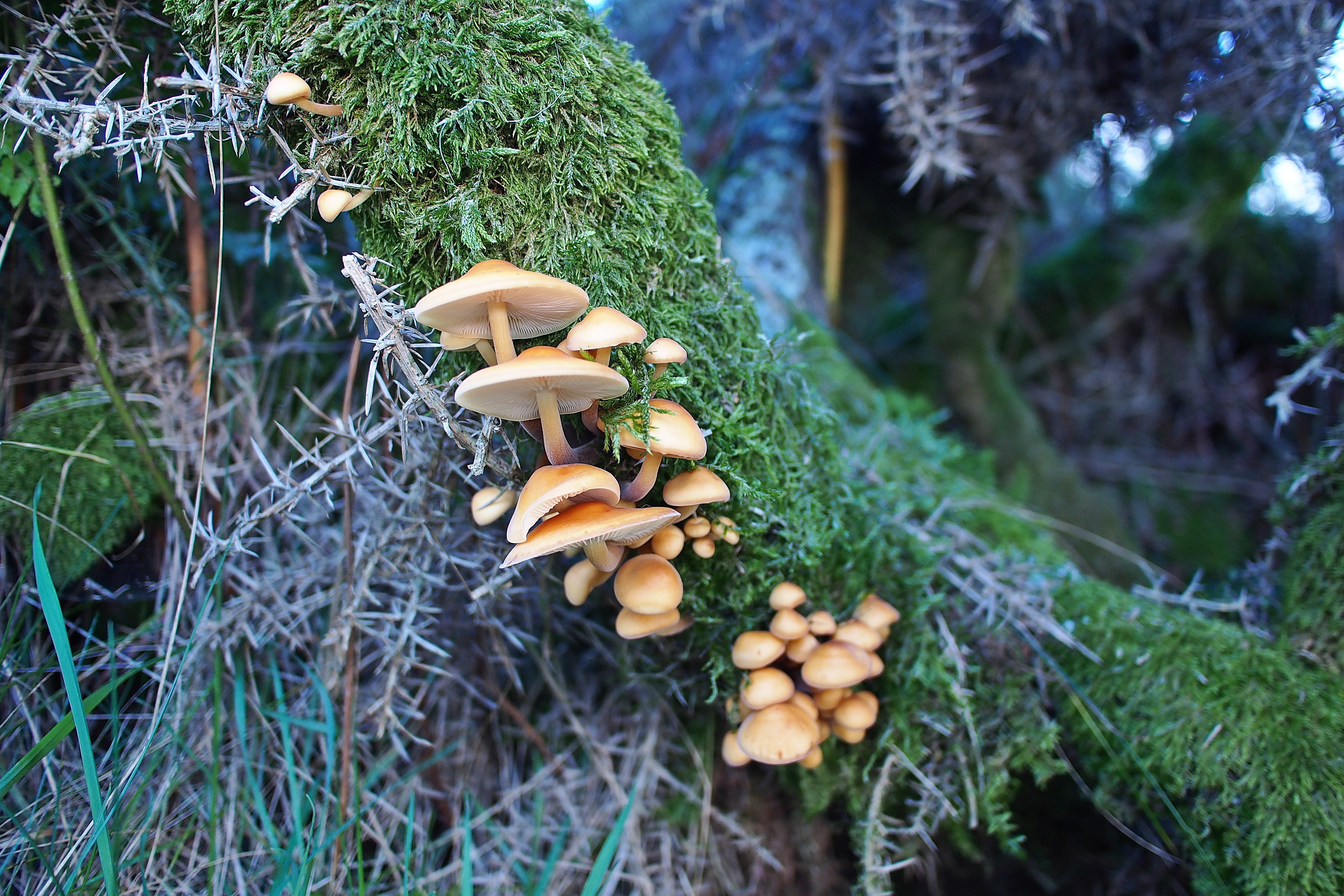 We had a good day out, a bit on the chilly side with that wind though, it was so crisp and clear we were fortunate that our final three were in such good conditions, in fact, looking back, the Howgills have given us some really nice walks in cracking weather

We're going to do the tops again but from different directions from now on, the Howgills are brilliant


Kendal Double, contenders for the easiest fells in Lakeland