Sunshine and rain up Carn A'Mhaim

After a failed attempt at climbing some Munro's in the Cairngorms range a few years ago due to illness I have been itching to get a few done. The plan was to head up Derry Cairn Gorm and Ben MacDui with an overnighter in the tent at Derry lodge but this idea wasn’t taken to well by my partner. Instead, a day trip up Carn A'Mhaim it was.

The long summer days meant that we didn’t have to leave Dundee super early for this one and we arrived there at about mid day, leaving the car at about 12:10. Leaving the Linn of Dee car park the weather was superb. Nice and warm but with some clouds lingering about to give some temporary relief from the sun’s rays.

We walked up to Derry Lodge, bringing back memories of an excellent camping trip I had up in the area a few years ago, although that day I cycled in. On approach to Derry Lodge, I wanted to have a little nosey at Bob Scott's Bothy which I had only seen from the main track last time I was up here. A nice wee bothy which is well equipped. 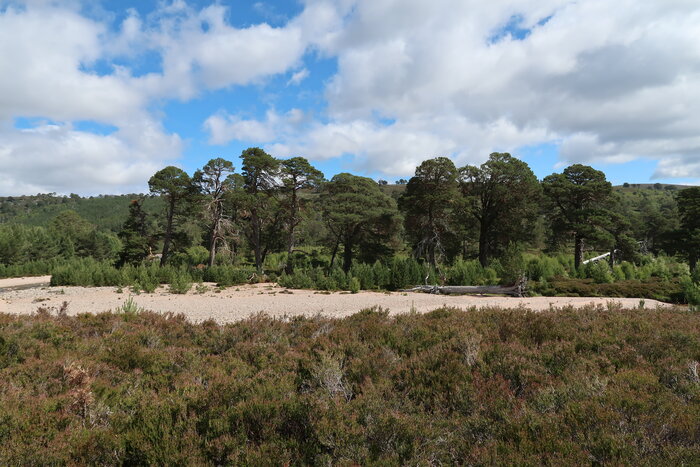 Carn A'Mhaim in the distance From Derry Lodge we crossed the footbridge over the derry burn then headed westward following the Luibeg Burn to the bottom of Carn A'Mhaim. To this point an easy and very flat walk. The forecast had said that come 19:00 ish there would be some heavy rain but between Derry lodge and Carn A'Mhaim we got caught in two showers which although were short were rather heavy. We also noticed the first of many quite large caterpillars at this stage of the walk. We saw loads of them.

After a wee while we reached the wooded area where the Luibeg Burn needs to be crossed. The two options here are to head north to the bridge or cross the river at the ford marked on the map. We decided to sit for five/ten minutes and have a snack (I ate all mines which I would later regret massively). This is the area I camped at a few years ago and it is a beautiful little spot. With the lack of rain, we have been having the river was quite low so we crossed at the ford with ease. After crossing the river, a short 10/15 minute walk had us at the fork in the path which was to take us up Carn A'Mhaim. The walk up from the start of the mountain was fairly average, not to steep until the zig zags were reached where the path got steeper. before long though the path's incline began to decrease as the summit approached. We could have skirted around the rocky ground as the walk highlands route suggests but we followed the track in the grass which took us up there and over to the summit. The path splitting off up Carn A'Mhaim

At the top of the boulder strewn section the summit was in sight. All that was between us and it was a small dip and a short walk, about 1/2 minutes. Upon the summit we were greeted with fierce winds and stunning views of the surrounding mountains. Ben Macdui north of us in all its majesty and across the Lairig Ghru, the four Munro's which stand guard. Looking down into the Glen we could see a group of people at the Corrour Bothy. 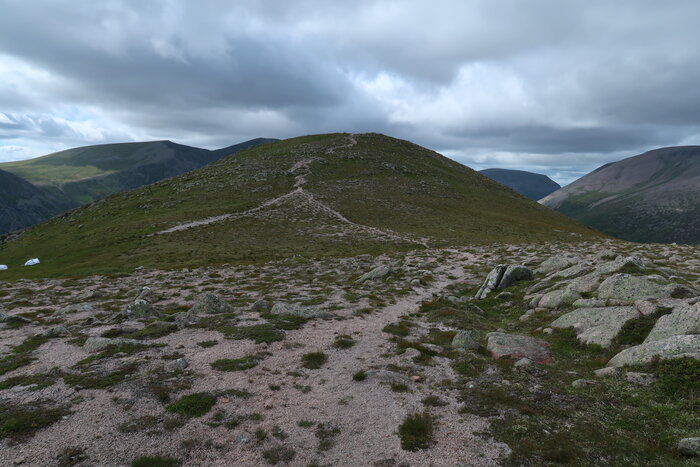 Looking over to the summit The western Munro's of the Lairig Ghru Corrous bothy from just below summit

A few pictures later we headed back down. We followed the same route back to the car that we had taken to the summit. Foolishly and for some unknown reason I packed nowhere near enough food for this trip. As we got to Derry lodge I could feel the hunger growing and the walk back to the car was nothing short of torture. I never have been that hungry in my life lol.

Despite the hunger at the end, as ever, a fantastic day out in what I reckon is my favourite part of Scotland.

Loving it up Lawers

A Fyne Day out