A fully justified morning off work!

With Gary having done walk reports for our last few outings I feel it's my turn, just hope I live up to your standards Gary! With this being my first report period, I hope you all bare with me as they should get better!

Gary text me on thursday evening to see if I was off the following day, and in all honesty I wasn't but knowing that this could only mean one thing I quickly moved a few goalposts and informed him I could be off during the day. I was at work at the time so I left it in his hands to decide on route and meet up time etc.

He decided on Meall a'Choire Leith and Meall Corranaich, the only question mark being whether or not the road would be accessible so Meall Ghaordaidh was the back up plan. I dropped my car off in the Lochearnhead car park on the A85 and jumped in with Gary just before 7.30am and we made our way up towards the Ben Lawers range, the road proved to be no trouble at all so we parked up in in the lay-by just past the cairn which the walk report described, kitted up and were away just after 8am. This would be my first outing in the new winter boots that I wasn't intending on buying so soon, but having found them on the outdoorkit sale at half price, I decided to treat myself. One for the lost and found?? The start of the path was pretty icy so careful going was needed but we made pretty good time and soon lost the path in the snow. The fence posts were a very useful indicator of the general direction we needed to be going as were the footprints we ended up following for a good while. It was not long before the ascent became a little tougher and I think we were both glad of a little breather when we came across a stream that was frozen over, but oddly enough you could see running water beneath the thick layer of ice, although the camera doesn't show it! We followed the ice stream upwards and took the oppurtunity to cross it at a narrow point and head more directly up towards the summit. Having not looked behind us since we set off we hadn't noticed that we were being followed. It wasn't long before the stalker was within earshot below us and having exchanged pleasantries from a distance we took our time for a little while allowing him to catch up, George was a little wary of Gary's dog Ruby at first but once he realised she was very much harmless he informed us that dog's tended not to be his biggest fans, the perils of being a delivery driver!

With two now being three, we continued up at a good pace, exchanging walking experiences while occasionally being caught by the odd icy breeze. It was great to see Ghlas and Lawers covered in snow as they were my first two Munro's and certainly made me fall in love with the new hobby during a cracking day last November.

We reached the summit of Meall Corranaich at around 9.45am and we all enjoyed the views and took advantage of such a clear day with plenty of photographs, all picking out hills in the distance with Ben Nevis being clearly visible. 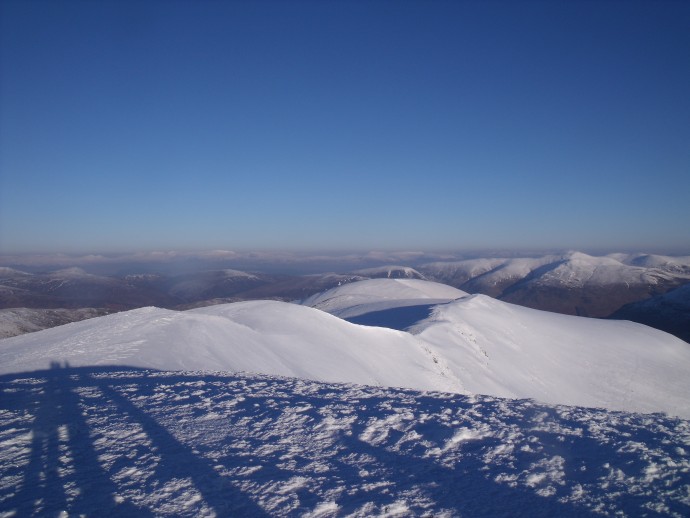 It was pretty cold so with gloves off we were feeling the chill a little and set off along the ridge towards our second summit of the day, Gary warning us that the WH route described that it was was easy to go slightly off course along the way as your natural instincts may deceive as to the easiest route to Leith. It wasn't long before we were almost caught out, despite the warning, but we quickly adjusted and made our way along the small ridge before the ascent began again, I think we were all feeling good at this point as we made it up in no time at all and again took in the views, a few more photographs and a spot of lunch were enjoyed at the summit of Meall a'Choire Leith. We remarked on a good choice of hills in the conditions as the unavoidable bog fest had so far been avoided due to the crisp nature of the snow underfoot. Another good choice Gary! The descent was quick at first but soon became a little more tricky as big patches of ice became more and more treacherous, we were certainly picking our route with care at this point but even with our caution we all had a slip at one point or another, Gary paying the biggest price with his mum's flask being broken in a 'banana-skin' style slide. Once the ice fields had been negotiated (I won't say successfully) the going once again became fairly straight-forward and it wasn't long before we were back at the cars in just over 4 hours. George expressed his thanks for letting him walk with us, as this was his first outing since last August and his only snow outing to date, it was a pleasure George and if you're reading this I hope you enjoyed your much anticipated pint (was it your car I saw parked outside the pub in Strathtyre?!!)

With the weekend weather forecast being so bleak I was glad we had made it out on such a cracking morning, the new boots had done me proud (justifying the investment as I had only been wearing trail shoes previously) and after Gary returned me to my car safe and sound I made my way back down the road and into work with a smile on my face, I suppose the unexpected outings often produce the best days.
Click to mark this as a great report. Register or Login free to be able to rate and comment on reports (as well as access 1:25000 mapping).