A drizzly pair of Lairigs

I can't admit to having held any particular ambition to walk both the Lairig an Laoigh and Lairig Ghru back to back. As with all the best ideas, it came about by chance more than design. A few weeks back I had been invited by James to walk the Lairig Ghru on Monday 23rd October. He was going to be in Aviemore for the weekend with his family and had decided to walk through to Braemar and invited me along (for the walk that is, not the family holiday

First thoughts were that I would simply drop my car at Linn of Dee, find my way around to Aviemore by public transport and just walk the Lairig Ghru. It made sense in my mind, what could be difficult about that? Of course, what I didn't fully appreciate at the time were the lack of timely options for making such a trip by public transport! James joked that I should just walk both ways, it seemed just as quick. I had a few thoughts about what to do and I vaguely recall having heard about another route from Linn of Dee towards Aviemore via some other Lairig. A quick check on walkhighlands and I soon discovered what I had been thinking about was the Lairig an Laoigh. Walking both was pretty much instantly settled on at that point, providing the weather wasn't going to be too horrendous.

Turns out the weather was looking reasonable. A few rain showers forecast, steady breeze - nothing too bad. My only real concern was the crossing of the Avon, but decided to go for it.

Day one: Linn of Dee to Glenmore via the Lairig an Laoigh
Sunday 22 October 2017

Day1.gpx Open full screen  NB: Walkhighlands is not responsible for the accuracy of gpx files in users posts

It felt a frightfully early start, my alarm going off shortly after 5am on Sunday morning after a reasonably late Saturday night. A dark drive over to Linn of Dee didn't help wake me up, but I got myself there shortly before 07:30. Conditions were calm and made for a good start to today's walking.

The first 5km out to Derry Lodge provided a straightforward start to the journey. Not many folk around at this hour, just a few on bikes - some heading up the glen, a handful returning after a night's camping out I guess. 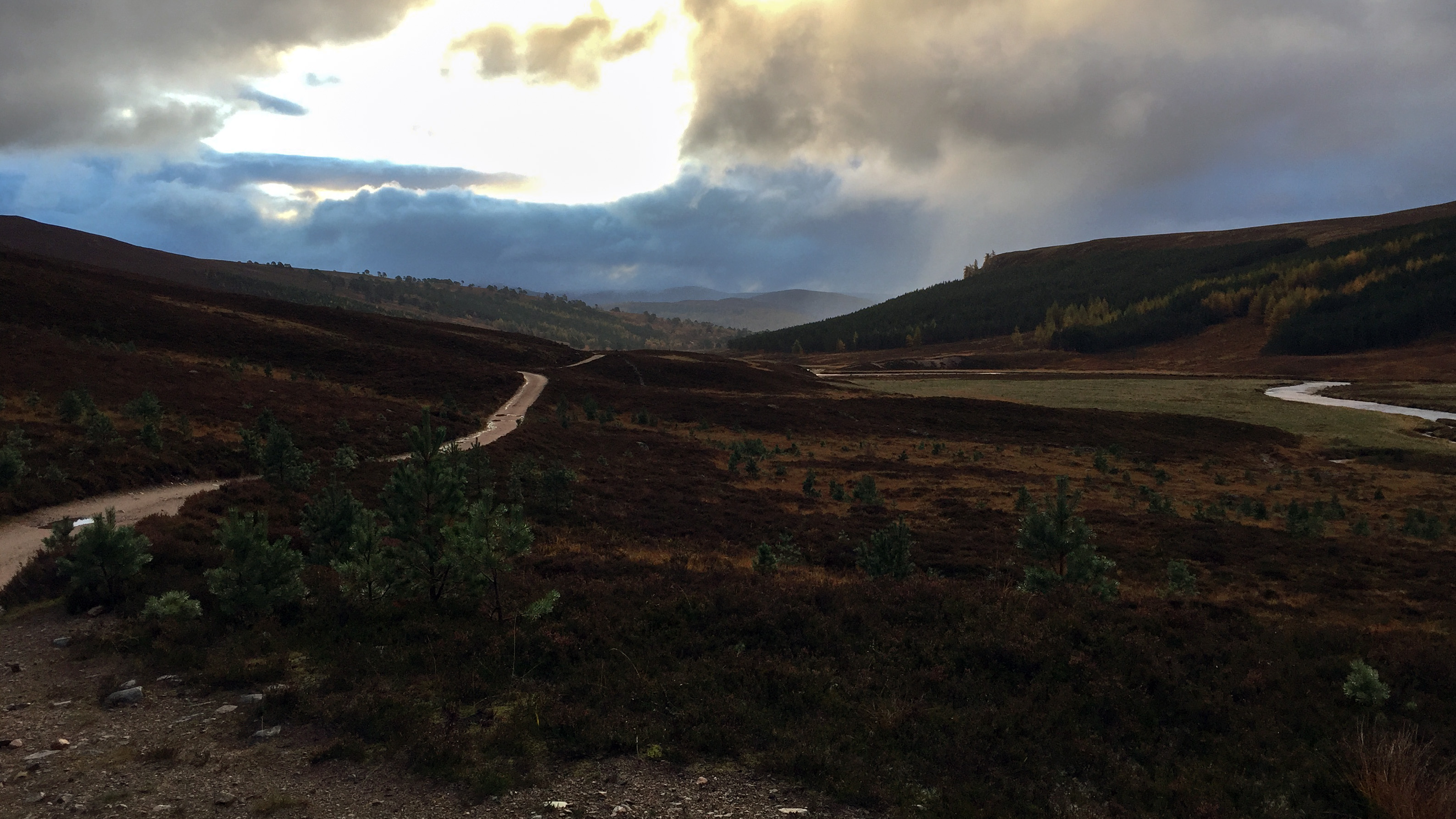 Looking back down Glen Lui

After a quick stop at Derry Lodge I veered right before the bridge and set course for Glen Derry, the path becoming a lot more squelchy underfoot. Nice walking through the woodland areas at this point, but it was looking pretty cloudy up ahead and I knew it wouldn't remain dry for too long. Rising up alongside Derry Burn it was nice looking down at the river flowing below. It was disappointing that all the mountain tops were lost in cloud. Turns out the whole outing in both directions was to be like that, so I certainly missed the best of the sights on offer here. 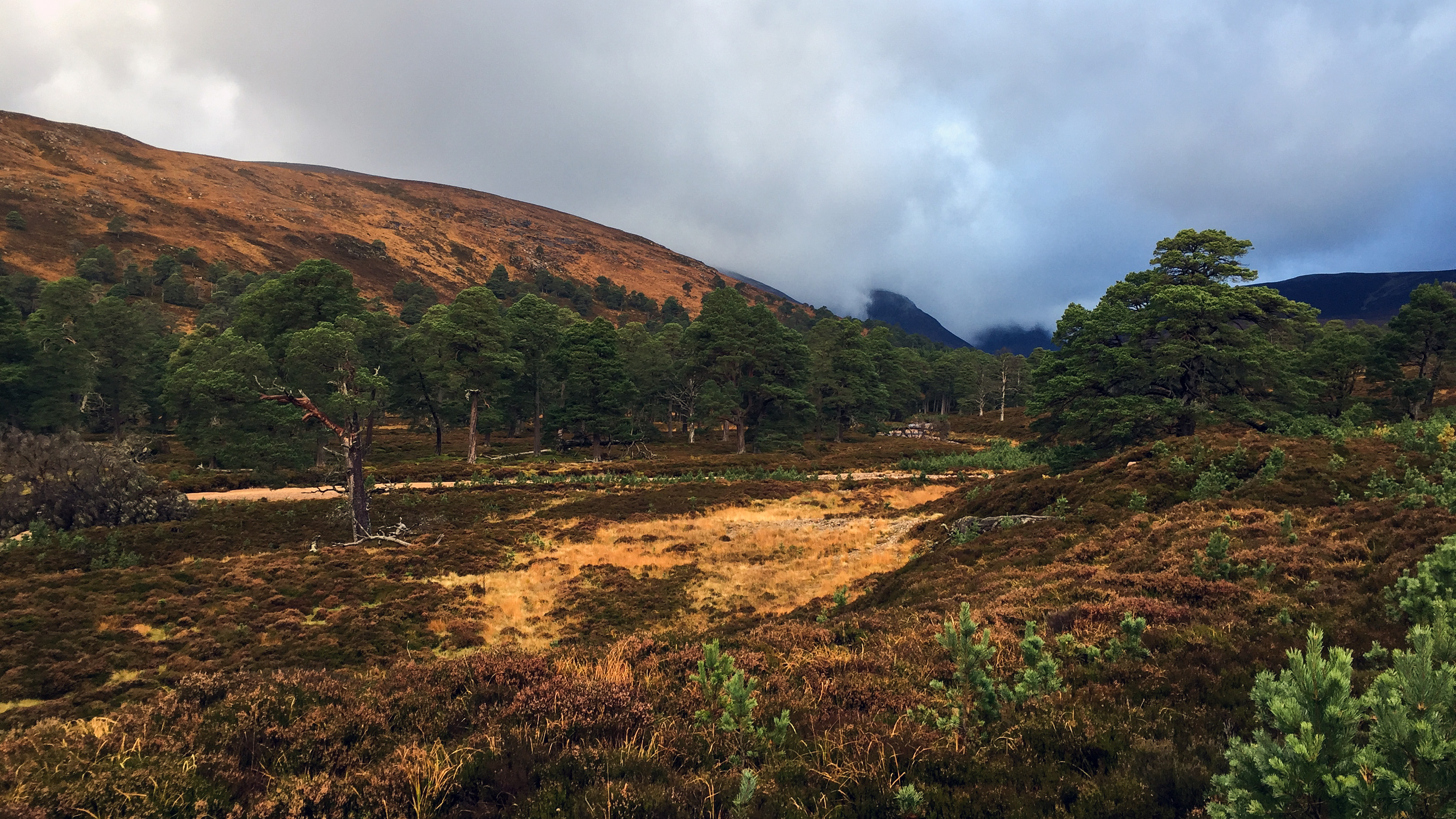 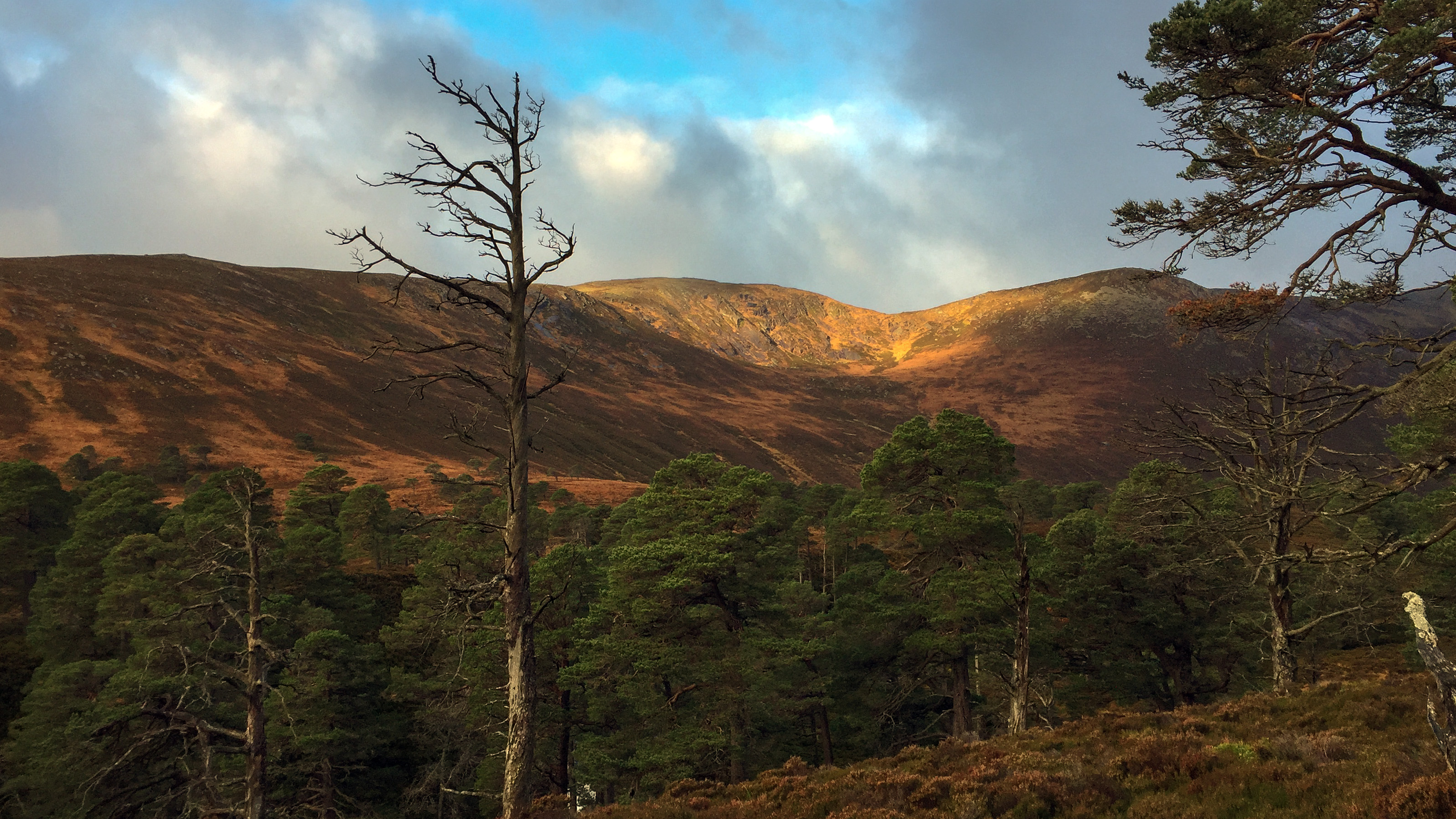 Soon after passing by the damaged footbridge at Derry Dam, the rains started, so I stopped to get the waterproofs on. The rain was persistent and blowing straight in my face meaning I didn't see much during this stage as I kept my head down and trudged along. Soon passed the path leading off up to Loch Etchachan and I started uphill on the other side towards the main pass through the Lairig an Laoigh. The rain got ever heavier as I started the slippery descent down the boggy path down to the Dubh Lochan and the Avon. 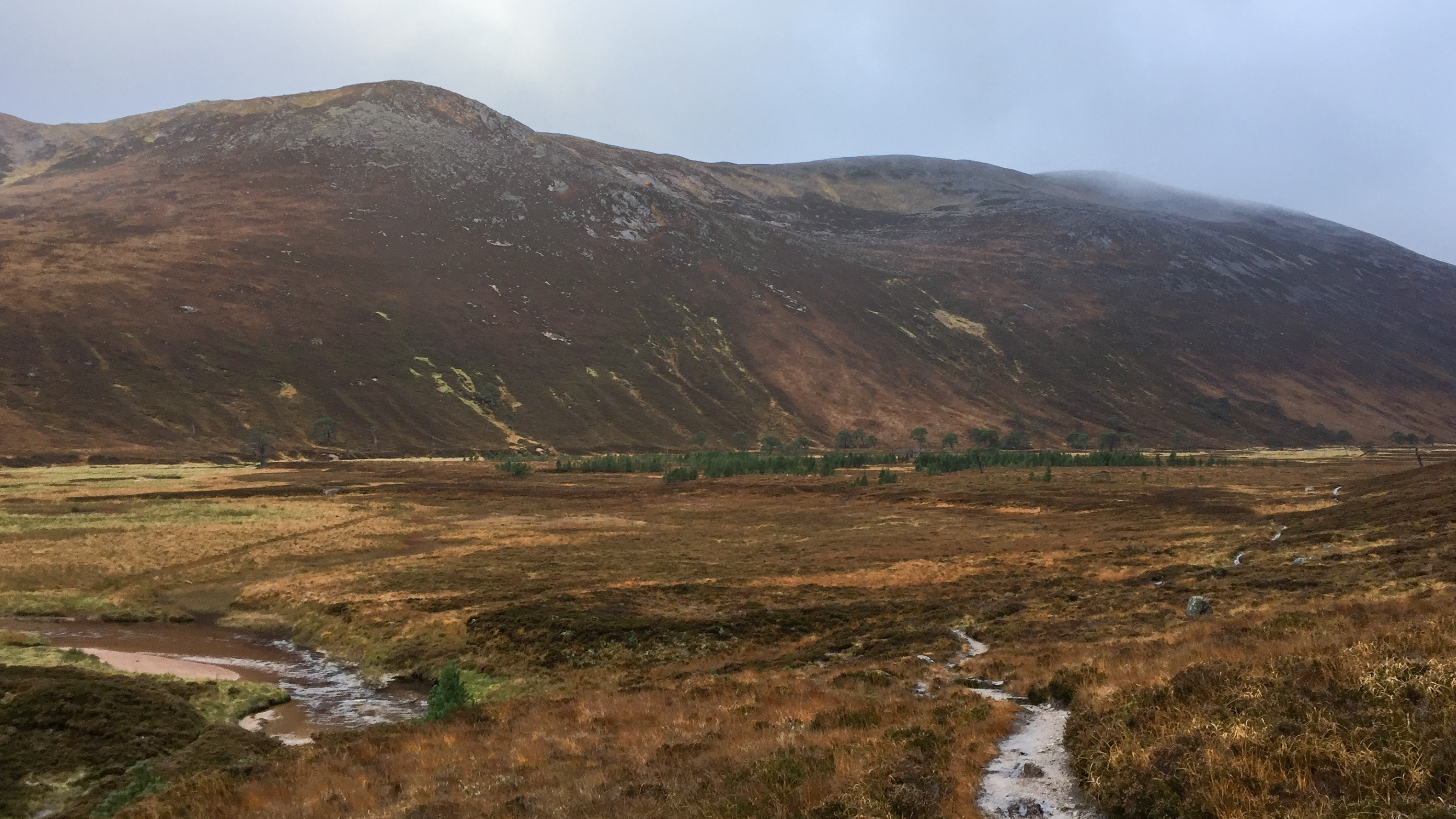 Glen Derry - just before the rains

Crossing the smaller of the two rivers was fine, splashed my way over in my boots no problem. The main crossing was flowing pretty fast however. I wandered back and forth a little to see if there were any better spots for crossing, not that there were. So boots off and over I went. The wet mud on the small island in the middle felt very warm on my bare feet after the first part of the cold crossing. At least the rain stopped for a while at this point, allowing me to dry my feet and get my boots back on before clambering up to the Fords of Avon refuge, where I nipped inside for a quick lunch break.

Two minutes after I got going again, the rain started once more. It wasn't to stop this time until the other side of Bynack More. The uphill sections of path to the east of Bynack More were more like small streams flowing downhill and the flatter section towards Uisge Dubh Poll a'Choin was terribly boggy. But after the last uphill section of the day, and meeting up with the path down from the summit of Bynack More, things did improve and the rain called it quits, leaving just a cold wind.

The remainder of the walk down to Glenmore was uneventful and I was looking forward to getting to my hotel for the evening and drying off. I did enjoy the wander through the Ryvoan Pass and catching an impressive glimpse of An Lochan Uaine.

Arriving at Glenmore Lodge I was lucky to be able to share a taxi with a few others who happened to be waiting to head down to Aviemore. I hopped out at Tesco to top up on supplies for tomorrow, before walking back along to my hotel. I dined on takeaway pizza and put my feet up to watch the US grand prix before sleeping solidly through to my 05:20 alarm the next morning.

Day two: Aviemore to Linn of Dee via the Lairig Ghru
Monday 23 October 2017

James and myself arranged to meet at 06:00 outside my hotel. I must confess, my legs were not exactly keen on moving this morning and felt pretty seized up as I hobbled out to the front of the hotel. Bang on schedule James appeared through the morning gloom and we commenced the trek up the dark and deserted road towards Coylumbridge. The walk along the road had the benefit of getting my legs into some sort of working order and soon enough we made a sharp right turn into the woods by the caravan park and were starting the journey proper.

The dark woods added to the ambience of the outing, but by the time we reached the Cairngorm Club Footbridge it was bright enough to stow our torches for the day. It had been very calm and quiet during our traverse of the woodland, but as we climbed upwards alongside Allt Druidh the wind quickly started to pick up and by the time we were completely clear of the woods we had the wind blowing right in our faces. I grumbled to myself for a short while about the fact it was blowing straight in my face again today, even walking in opposite direction to yesterday

. It was very pleasing, however, to turn around to see Aviemore way off in the distance and get a good feeling for the ground we'd covered already this morning. 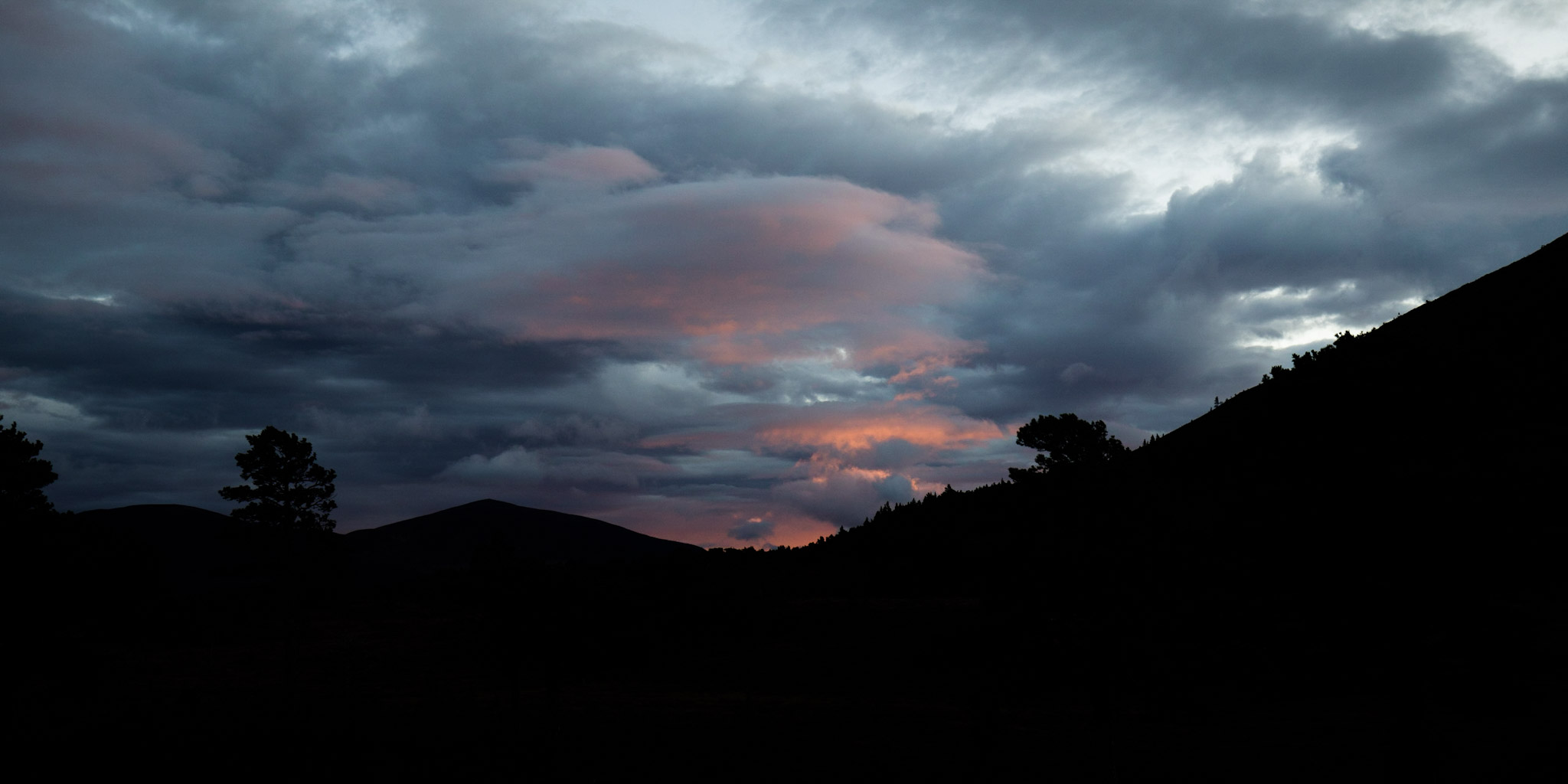 A little later, we found a sheltered spot amongst the rocks beneath Lurcher's Crag to stop for a quick bite to eat and duck out of the wind for a short while. Then the rains came on as we climbed our way onward and upward through the Ghru. As we approached the highest point of the pass I was really feeling yesterday's miles in my legs and feet. After some slow progress (on my part) through the boulder fields I really needed another breather and stopped at a handy windbreak, just before the Pools of Dee. There was at least some relief that it was mainly a gentle descent for the rest of the way. 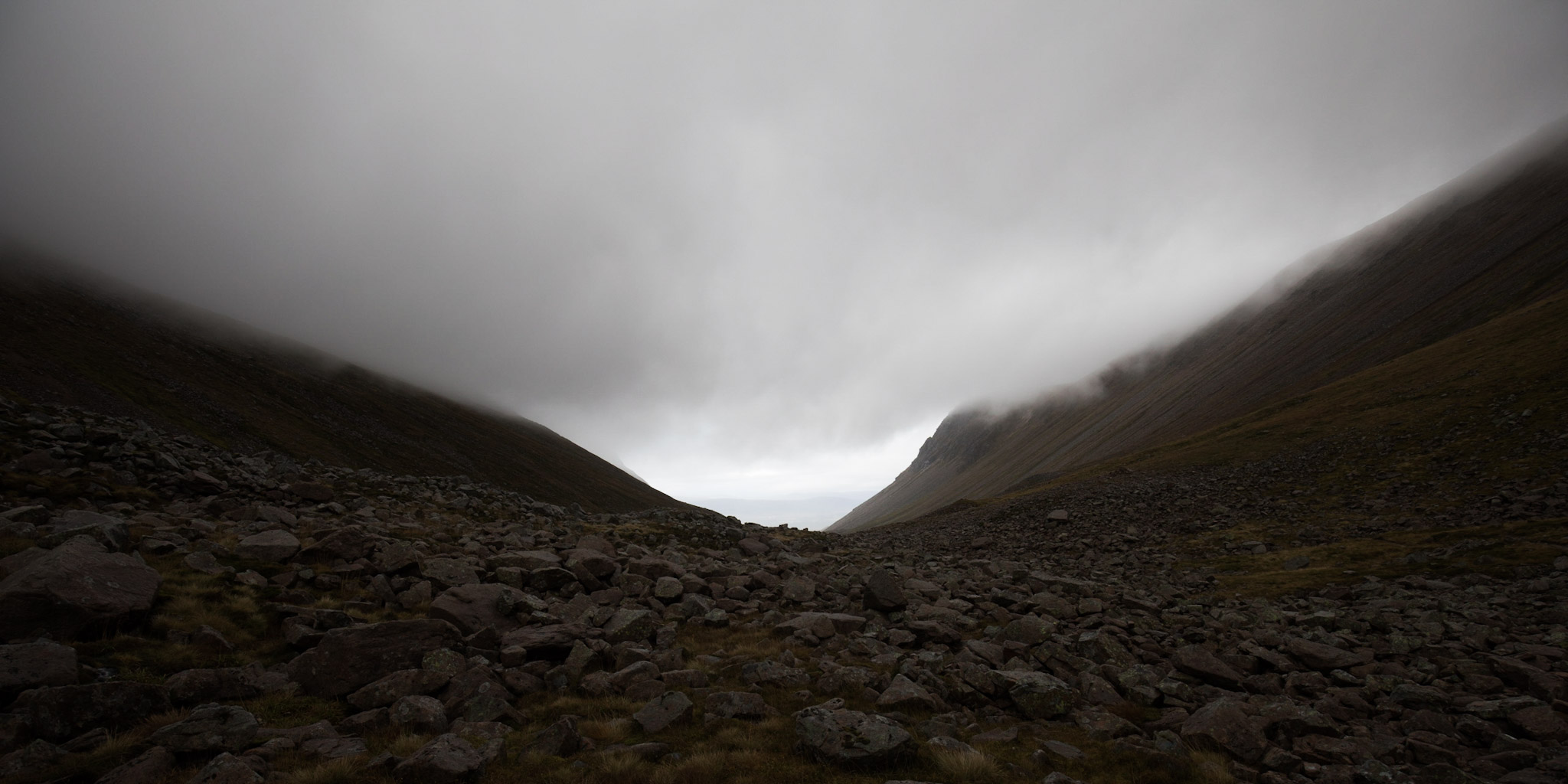 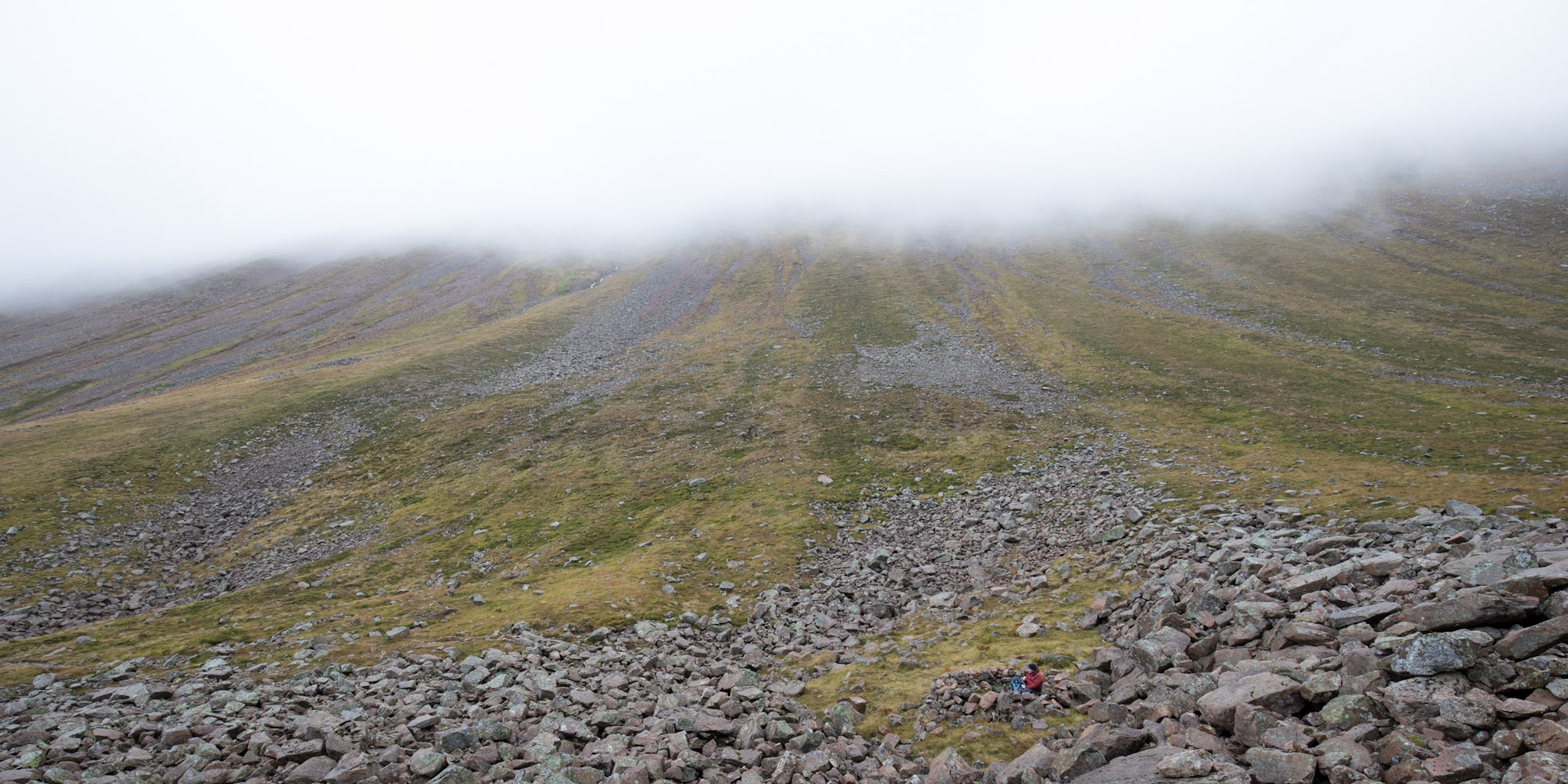 Near the highest point (photo by James Arthur).

We got going again and made our way past Macdui and Cairn Toul, both lost in the cloud and rain above. Soon the cloud lifted just enough to give us at least part of a grand view of the Dee snaking its way southwards through the glen. At the Clach nan Taillear we stopped again for lunch. We had some thoughts of going for Corrour bothy for our stop, but I was happy not to add any additional steps if I could help it. I think James sensed this also, so didn't suggest it. 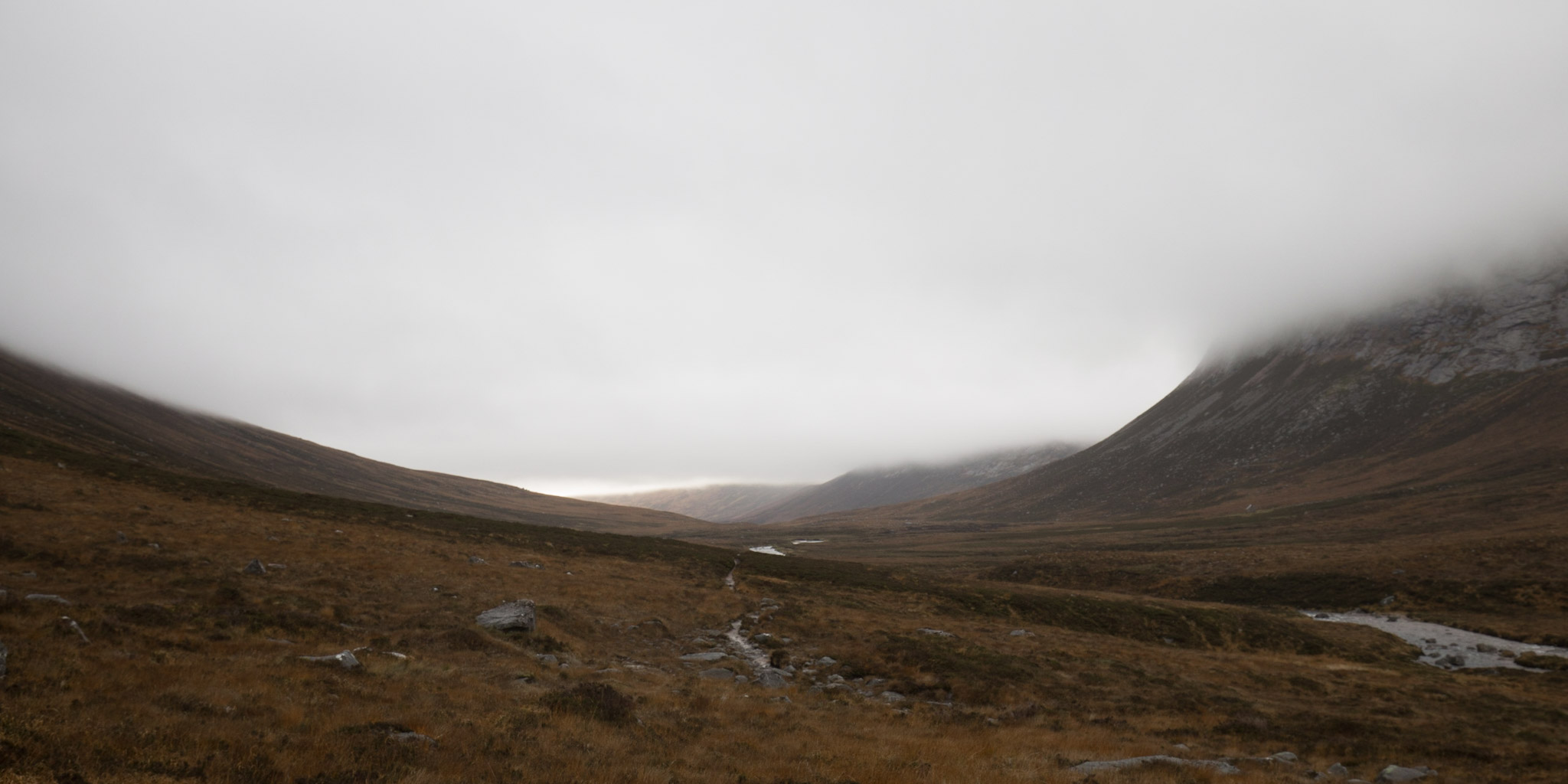 After lunch we kept going all the way to Derry Lodge. By now the wind had died down and the rain had given up for the day, so it was far more pleasant conditions for this second half of the journey. The waterproof jacket was soon stuffed back in the rucksack. Curving our way around Carn a' Mhaim we soon had to decide whether to take the detour for Luibeg Bridge or to ford the river. Looked reasonable from above, so we descended down to discover it was probably flowing a little higher than we first though. However, I just went for it and skipped across, only just avoiding filling my boots with water on a slightly more submerged than anticipated rock. James, more sensibly, took his boots off before attempting the crossing. In the end we'd probably have been just as quick going for the bridge.

The mile or so to Derry Lodge soon passed, but the bogs just prior to the footbridge were not particularly appreciated. I was quite delighted to finally cross the bridge, complete the circle and meet the path I'd set off on yesterday morning.

One last stop at Derry Lodge for a final bite to eat. Still 5km to go, but I knew the track made for easy walking. All I had to do was ignore my feet screaming at me and keep putting one foot in front of the other. I had in my mind that the bridge over Lui Water marked roughly the halfway point back to Linn of Dee. I was even more delighted to find that it was more like two thirds of the way back and we were soon back at the car. Oh, the relief in taking my boots off! Wasn't quite so happy to discover a sock covered in blood and very little skin left on the back of my right foot

. Think it's time to invest in some new boots!

Thanks to James for inviting me along on this outing, and my apologies for dragging the average pace down substantially! After the drive home I really struggled to get out of the car and into the house. However, as painful as that was, I didn't mind in the slightest. Even with the lack of views, the trip through the Lairig - both of them - are entirely worth it.

Pressendye via the Playboy Bunny

A wander back on my first hill

A snowy trip around the Correen Hills circuit