Having seen many people had successfully done the 'Lawers 7' in a day, I thought it would be a good challenge to try and go one better and do the Lawers range and then the Tarmachan ridge as well. One continuous walk with a strategically-placed bike at the Lochan na Lairige to roll down the hill and back to the car on at the end of the day.

Ready and packed early on Friday evening but couldn't sleep from the anticipation, eventually I nodded off around midnight but was crudely awoken at 5:30am; I managed to drag myself out of bed (so much earlier than on a workday), have a shower and breakfast then head up the road at about 6:45am.

Some slow traffic on the A84 already, disappointingly, made it to the car park at the north end of the Lochan na Lairige by 08:30 to drop off the bike and some strategic supplies, then drive along to the Lawers Hotel, where one can park in the lower car park for free as long as you 'spend some money' in the hotel at the end of the day – there was my target then, get into the bar before closing time!

Finally set off on the walk just after 9am, taking the track then path behind the Horn Carver (easy to find thanks to many helpful signs painted on rusting archaic farming paraphernalia). The path is good, tracking a lovely stream through woodland then up onto the open moorland, plenty of grazing here so along the river the grass is short and there are plentiful sheeptracks to follow as the path peters out – when the ground on the right became shallower at the old shielings just before the weir, it was time to turn north and plod uphill – gaiters on at this point - plenty of soft, fresh snow to slow the progress today! As the ground starts to steepen, I turned NE then on joining the ridge, headed E then SE to the summit of the day's first Munro, Meall Greigh. A cold wind blowing, far too cold for late-April, lots of frosting and some ice up here but easily avoidable. The views behind of the Lawers range proper around Lochan nan Cat were beautiful, likewise down over Loch Tay, and north to Schiehallion whose long whaleback ridge is especially aesthetic from this angle. 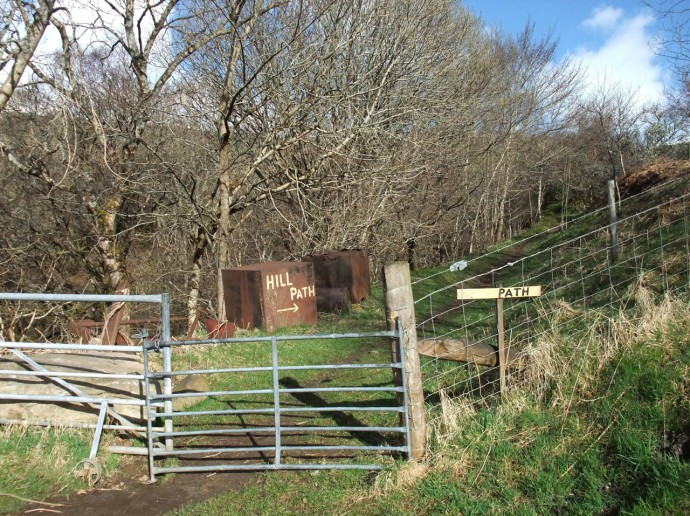 Can this be the path? 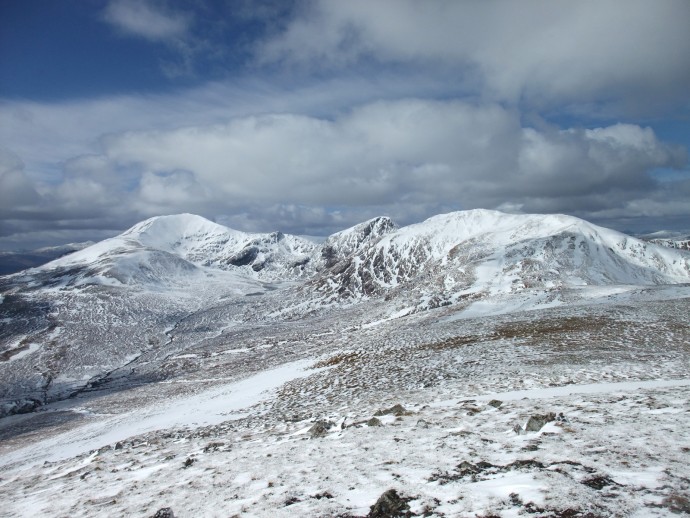 Lawers and Co from Meall Greigh 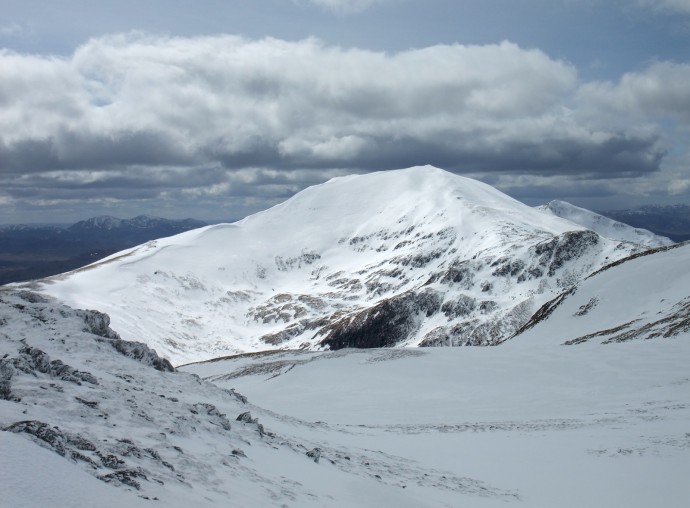 Descending off Meall Greigh was an awkward affair in deep, soft snow – it's a lumpy, undulating hill and the path here was either boggy or under deep snow, slow progress for a km or so. Eventually the ground firmed up and it was onto the climb up the eastern slopes of Meall Garbh – another tedious slow plod, wasn't making good time thus far and not sure if the day's targets were achievable.

Eventually the narrowing summit crest of Meall Garbh was reached. It's worth noting at this point the importance of a regular break (hourly or so) for a decent scoff when on any 'endurance' walk – a constant, steady supply of fuel to any engine is essential! Bananas, chocolate and sandwiches, and some salted cashews as well. Still felt fresh at this point and the views ahead to the south and west and the crux of this fine range were really opening up. Behind the lonely mass of Meall Greigh looked a long way down. Atop Meall Garbh it really was difficult envisaging a route up An Stuc – having been here years before in summer I knew a good path picked its way up through the crags but would I be able to find it under the drifting snow? 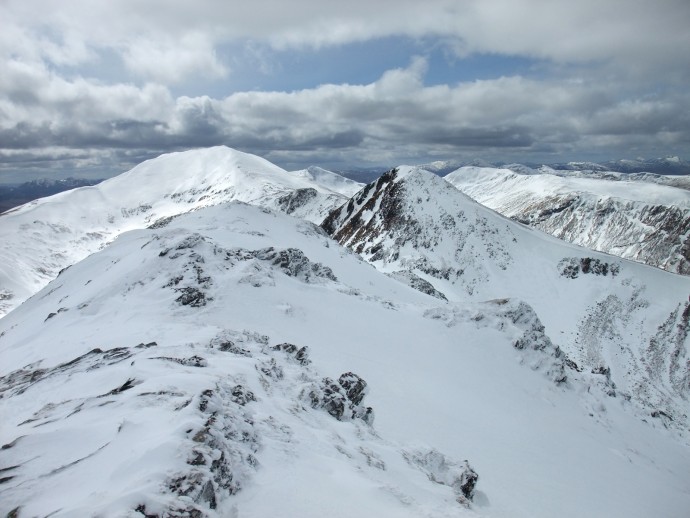 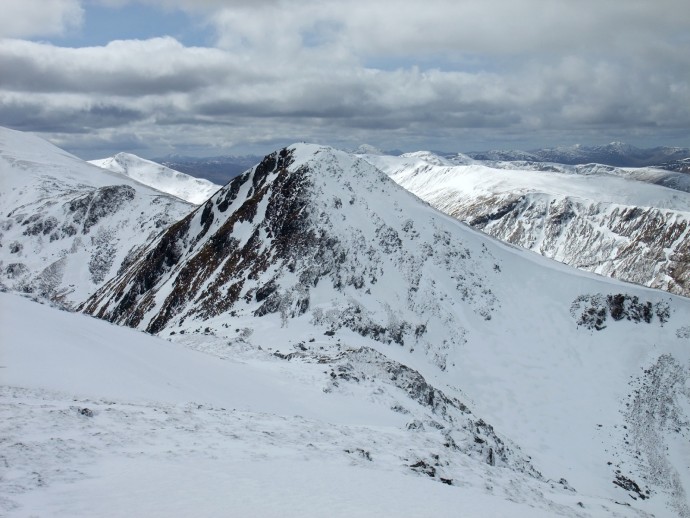 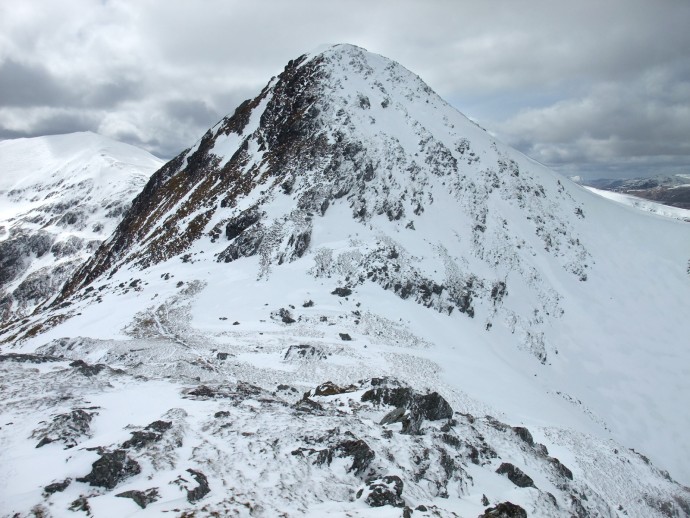 An Stuc - how the hell do you get up there?!

Time to find out - itching to get on with the mission, I spied some people 'topping out' on An Stuc – buoyed by this as it made the peak look smaller than it had first appeared, I descended carefully on compacted snow to the col then headed for their tracks – left of the mass of crags the path was visible in places, completely buried in others, and it took a fair amount of carefully picking my way around/over some awkward loose rock, at times covered in soft and slushy snow, before eventually the gradient eased and the airy summit of the day's 3rd Munro, An Stuc, was reached. The wind from the NW was bitingly cold here but dropping just a few metres off the summit to the south afforded complete shelter and it felt baking hot! Time for some more sunblock and a good feed, while contemplating the big climb to the day's highest peak, Ben Lawers, ahead. 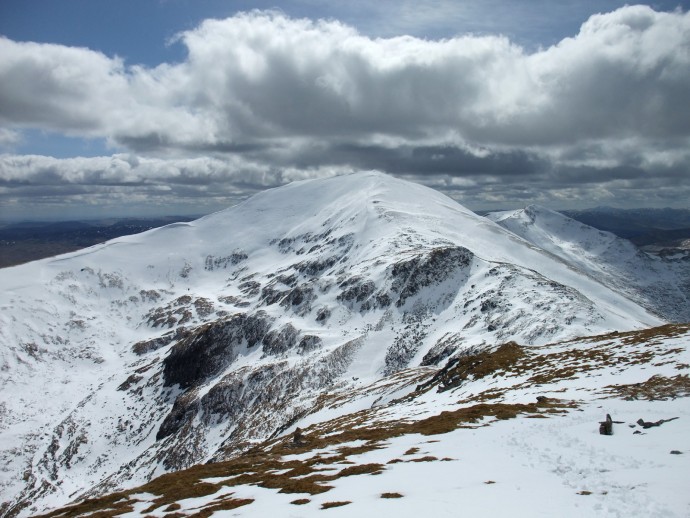 Heading off An Stuc I passed a large party with full winter gear – mine hadn't been called upon yet but would I need it soon? The north ridge of Ben Lawers was particularly icy so crampons were very helpful here, although it eased off towards the very top. A quick obligatory summit photograph or two and time to look West and contemplate the next peak, the relatively unchallenging Beinn Ghlas. 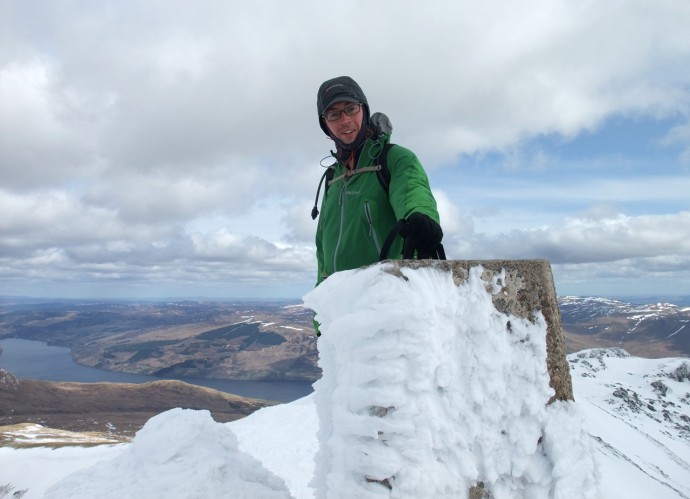 Me on Ben Lawers' summit with weird, giant spidery hand... 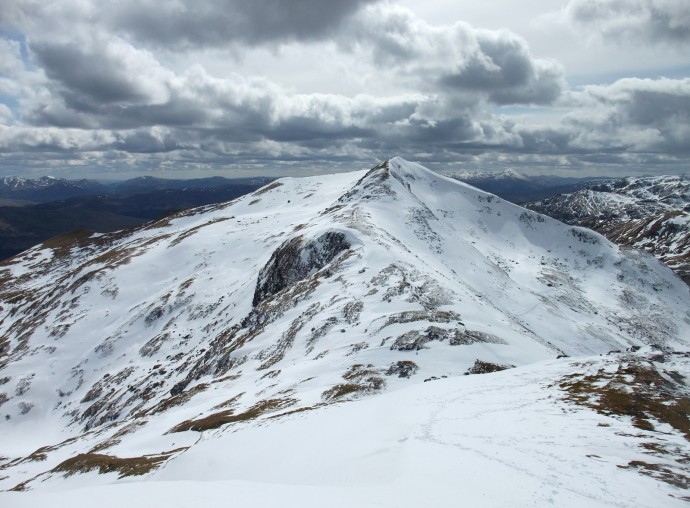 Still time to encounter some numpties in jeans ascending the upper reaches of Lawers, and it was on to Munro #5 to see if I could catch a large party who seemed to be giving me every chance to catch up. I got distracted by the great splendour of the northern corrie of Beinn Ghlas though and its fine NE ridge, so by the time I got to the summit, all was deserted once again. Sheltering from the wind for yet more eating, I was treated to the spectacle of a rather orange man in shorts, with his companion, heading down what I realised was the track back to the main Ben Lawers carpark. 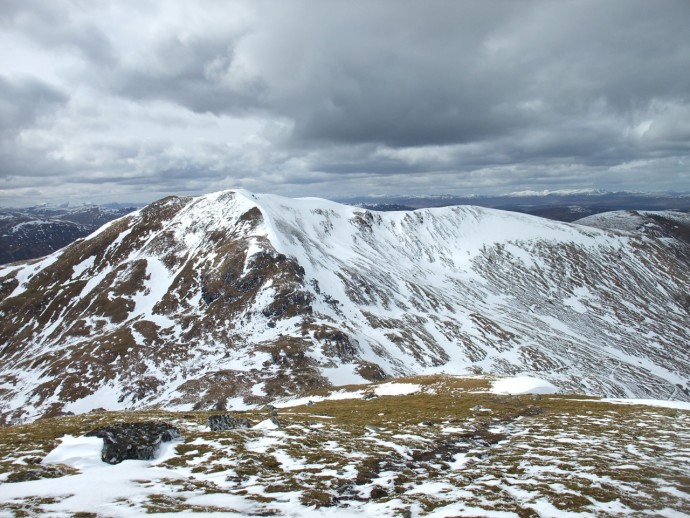 Time for me to head off the NE ridge, after some careful descending of a very steep and iced slope I joined the path which skirts the north side of this peak and looked for the best way up Meall Corranaich – the path heads to the left of the initial promontory then veers right up steep ground, no snow in the most part so was easy to follow today, the climb was easier and quicker than I expected and before long I was on the top – you arrive quickly on this summit and I felt very pleased, I had made good time and figured if I could get to the bike at or before 6:30pm there would just be time for a crack at the Tarmachan. Just the trivial matter of the day's smallest Munro and #7 for the day, Meall a' Choire Leith, and not before a minor navigational mishap when I got distracted following what I surmised were probably my friend Phil and potentially a companion's crampon tracks, and I headed to the 984m spot height before looking East and realised my error – easily rectified and down to the col, then a very gentle climb up the other side – plod followed plod – this summit a big rounded breast of a hill which took what felt like an age to obtain; the Lawers 7 accomplished in around 8.5hrs – I felt pleased with this effort given the conditions were still decidedly wintry - but more hard work still to come. 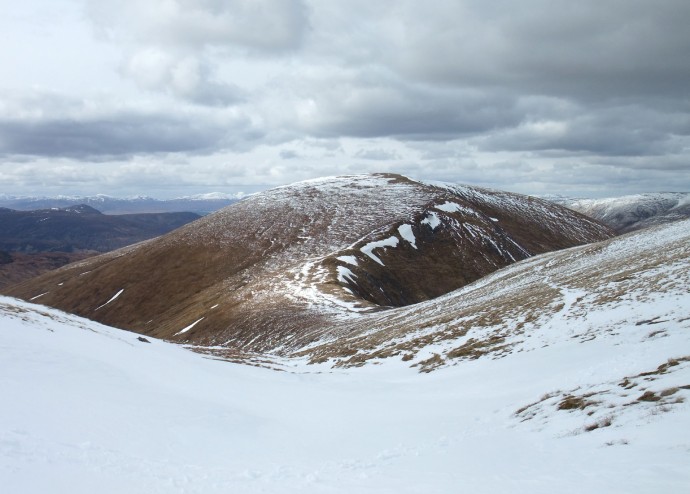 Heading down into Coire Gorm and across the stream covered by ridiculously deep snow drifts, I spied the 635m and 669m prominences between which a track supposedly started to lead me down to the road – this was the wettest ground of the day by far, very tedious going here and minimal evidence of a track. Not a moment too soon the new path from roughly the 600m contour line appeared, to whisk me down to the road and the bike; 6:32pm, time to refuel and take on board the strategic water and bananas, steel myself for the toughest part of the day ahead and get moving! 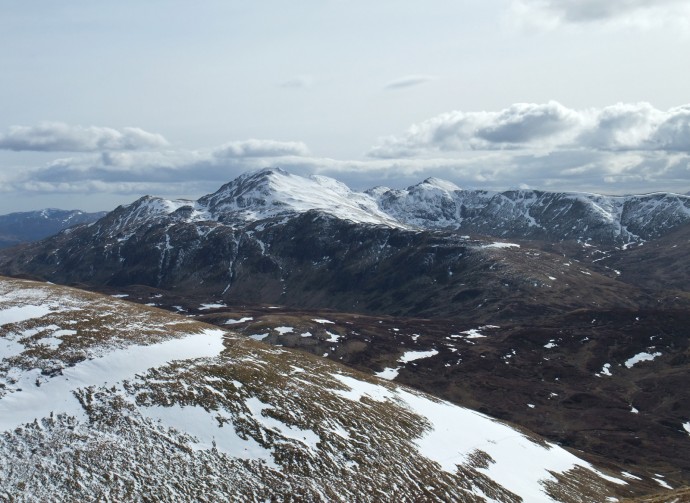 From the fenceline just west of the Cairn at 549m, a stile crosses a deer fence and electric fence – I crossed this and stayed left of the fence where a faint but reasonable path heads, steeply at first, then more gently, to the 774m spot height on Creag an Lochain. Meall nan Tarmachan towers ahead – a series of ever-tougher icy peaks, with the ridge looking forboding to the right. The legs are feeling weary now. The ground undulates, what appears to be a bypass path from a stile starts on the other side of the fence but I ignored this because I knew the true col beyond the 842m spot height was hidden and somewhat higher. Crossing the col NW of Lochan an Tairbh-uisge I made for a fairly obvious gully to the left of some outcrops then slanted diagonally and SW towards the north side of the main peak of Meall nan Tarmachan – very icy here, tough going as the ground steepens towards the 1,000m contour where I snuck into a gentler gully just W of the 998m spot height and from there the summit was easily obtained – Munro #8 and a joyous moment despite the ever-harsher NW wind and growing fatigue; 8:15pm, time for another snack just out of the wind. I stood up and braced myself for the ridge but in just a few minutes the wind had strengthened and what looked like some snow showers loomed ominously in the NW – I quickly realised that attempting the remainder of the Tarmachan ridge in these worsening, wintry conditions with an hour of daylight remaining and being fairly knackered would likely result in a call to Mountain Rescue so opted for the 'tourist route' off MnT to the col under the 923m top, then a steepening descent through a few moderate gullies towards the pipeline leading out of the Lochan; the campers' bonfire on the opposite bank a beacon of hope as I heading in the growing murk towards the road and salvation. A 3km trudge back to the bike with a slight feeling of disappointment at not having done the full ridge, but quickly vindicated as some pretty minging weather blew in. A cheery greeting from the campers drove me on back to the bike – 9:40pm, still not quite dark enough to require a headtorch, just the ride downhill in the dark and along the A827 back to the hotel and the car to go. Made it back to the hotel far too late for food but enjoyed a hot chocolate and a kit kat before the drive home. 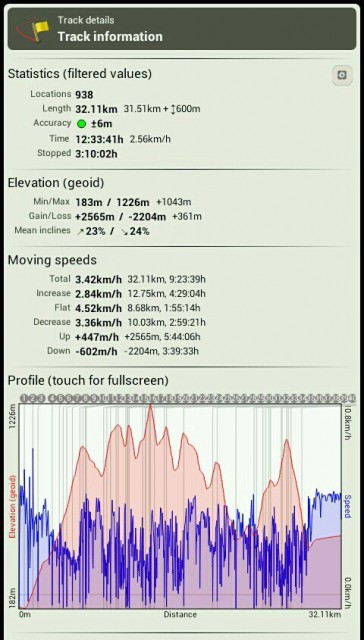 
The Great Wall of Rannoch in a day