After pondering where to go for a while and getting some advice on the forums I decided to head for Arrocher and have a wander up Beinn Narnain with the idea to spend the night on the shoulder of A'Chrois to the east. A 30% chance of cloud free says MWIS but I have a few free days so I pack a bag and bring the dog.

Driving up Loch Lomond the weather looks overcast but there are patches of clear sky appearing.

I park up in the Succoth car park and head over the road and on up the hill. I was walking for 1650 and immediately feeling the weight on my back as I took the path straight up through the forest.

I knew the other path had, perhaps a few too many, zigzags through the forest but this path has none and I could use a few right now. Dragonfly darting through the long grasses by the stream. Warm.

Breaking free from the clutches of the forest and the relentless Culicoides impunctatus, I reached the open hillside where the breeze cooled me a little, although the pitch continued pretty constant, and steep.

I headed round W a bit to go up the shoulder of Creag an Fhitchich but missed the path and ended up picking a nice route up through the crags. A few steep rocky steps where I wondered whether tcharka would find a route, I had seen her slip on a wee rocky bit further down, however she attacked it with vigour and leaped up past me only stopping to look around like, "well..come on!" So that was to be the end of any concerns I had for her managing to make her way. Focus back on myself and hauling this load up. I had packed as light as I could but reckon I was closer to 20kg than 10. It was at this point I realised that the three books I had meant to unload before walking were now making a wholly unnecessary journey up Narnain.

At least I would have plenty of reading material later!?

I continued up the nose and picked a route through the crags until stumbling upon the path at the foot of Cruach nam Miseag. A welcome relief from the slippy grass and lumpy heather. Lots of bog cotton around looking very atmospheric as the daylight began to dwindle. Met a few folk here, one hiker cutting up from the cobbler path which looked a steep pull and a father/son duo on the path I had been neglecting. 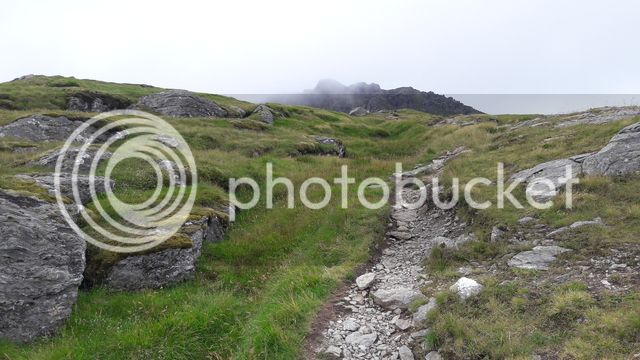 The wee lad gave me hope, if he's looking so purposeful at 13/14ish and already halfway up then I should be able to do this. Some water, some oats and honey, Head down and push on up the rocky ascent.

Topping Cruach nM the Spearhead of Beinn Narnain dominates the skyline. A little scanning was needed to track the route of the path up through the next set of crags.

Knowing the dog was part gazelle it was my quads that were in my thoughts, only pushed to the side by the views which were opening up down Loch Long to the south. Pretty

Cresting the Spearhead I arrived on the summit plateau and took a good wander about. 1910, I had made good time which I was happy about, meaning I might make camp before the sun dipped. The breeze was stiff and constant from the west and the shadows were lengthening so I didn't hang around too long before setting out for A'Chrois.

A wee descent and then a lovely meandering wander amongst the knolls of the ridge over the Sugach Buttress. Wee ascents and descents and lots of sheep tracks going every which ways. The light was just stonkingly fun along here at this time of day as it played on the rocks and lochans dotted about.

Reached the far end of the ridge and ascended a wee touch before setting camp on the S shoulder of A'Chrois. 2015.

Pitched so that my door was to Ben Lomond for the sunrise before noticing the wind and the lack of lateral rigidity my tent has. It doesn’t have any guy lines other than at the ends so I unpegged and rotated (v.careful not to let go at this point I thought

All set up I took a break from the wind and a wee rest for the legs before nipping up to the summit. (Now with no pack on, and half a pack of jelly babies in me, I was monsieur gazelle!) Some pictures and a wee run about w tcharka were enjoyed as the clouds provided a wonderful canvas for the colours of the sunset.

Super beautiful, objective attained. Peaceful and tranquil with huge skies and views in every direction. Loch Long looking long and canal like in its linear proportions, a speedboat spinning circles of white wake for a while contrasted nicely with the monotone surface. Loch Lomond opening up to the S with its many islands and the highland boundary fault clearly visible across Inchcailloch through Balmaha and up the hill, constantly heading NE'wards, or perhaps SW'wards. I don’t know, either way a great perspective on the Caledonian tilt. Loch Katrine to the E with Ben A'an (I think) at its head.
Looking NE I wondered whether it was Schiehallion I was seeing as a distinct peaky peak in the distance.

In for the night. Tcharka takes a wee bit of encouragement to come in the tent. Flappy noisy thing. She lies as a sentinel at the front door for a time, luckily its dry and there is no rush to shut up the doors. Eat dinner, jetboil stove and chilli con carne, wish I had more fluids. There was water but sheep too, think I might invest in a Sawyer squeeze water filter. I carried a small piece of tyvek sheet backed with some foil for her to sleep on and to protect the groundsheet from getting torn.
She seemed comfortable with that and I put my jacket over the foot of my sleeping bag atween her and me to stop my downy loveliness getting damp or smelly like a dowg. Zzz. Stuck my head out for stars, nope. Had an alarm set for sunrise but low cloud to the east meant nothing for now so dozed off again.
Sun on the tent awoke me, so opened the doors and enjoyed the early light hitting ben lomond and the loch in streaks, from the horizontal comfort of my tent.

Up now, Oats and honey, choc pancake and no fluids. boohoo, lesson learned though. Struck camp by 0700. Silent and still, took me a while to realise that it was wind noise that was missing. Lovely silence as the sun reached higher into the sky. Sealskin socks on today on top of hiking socks due to wet boots (standard fare).
Back along the ridge, this time following a contouring sheep path on the N side, cutting across the tops of Creag Tharsuinn w great views of Vane, Vorlich and Ime. Clag now blowing in, intermittent low vis. 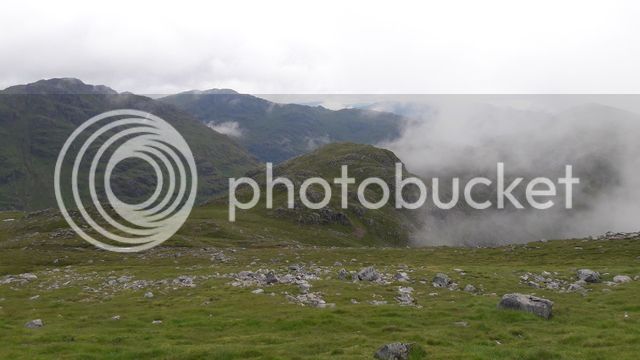 Back up to summit Narnain. A brief moment of concern as tcharka took off after a mountain hare (they are quite big) and the pair of them danced and darted over and around the rocks of the summit before disappearing. I took a seat, 5m passed and she appears trudging happily back up with her tongue well out and a look of "well that wor fun!" Ya dafty

Now down to Bealach a'Mhaim, idea was to go over Ben Arthur and along the ridge that runs SE. My legs weren't up for that, poor show. We’ll build on it. So down the motorway, stopping only to have a play on the Narnain boulders. Took more than a couple of attempts to clean the first one by the crack on its E side, nice wee problem. Down down,

past a steady stream of folk, Saturday now eh, making their bid for the hills

Back at the car for 1000, round to the village store for a well needed cold drink s. Refreshed, rehydrated and pleased at our wee adventure, time for home.
Click to mark this as a great report. Register or Login free to be able to rate and comment on reports (as well as access 1:25000 mapping).