Back in 2015, my second year bagging munros, a small group of friends decided to try the Mullardoch Round - all 12 munros with a wild camp somewhere in between. I can't speak for the others but I wasn't anywhere near as hill fit as I am these days, and even now I don't think I'd fancy trying that again! Anyway, after starting from the Mullardoch dam and carrying all our gear over Toll Creagach, Tom a'Choinich, Carn Eige and Beinn Fhionnlaidh, we soon realised we our ambitions exceeded our ability. And so we bailed - straight down off Bealach Beag into Gleann a' Choilich, around to the north side of Loch Mullardoch to start a walk out that will haunt me to this day.

One of the results from this was that Mam Sodhail, often done as part of a round of three (or the twelve), was now an orphan on my bagging map.

Fast forward to December 2021, and facing a solo weekend with everyone else busy, i figured I could just get that one done - I had the route all mapped out and, winter gear all packed so what could possibly go wrong?

Here's the route I had planned:


Mam Sodhail loop.gpx Open full screen  NB: Walkhighlands is not responsible for the accuracy of gpx files in users posts
That day did not go well. I knew it was going to be one of those days when I changed into my B3s at the River Affric car park and realized I had forgotten to pack my gaiters. I decided to do the route anti-clockwise - ascending Sgurr na Lapaich first as I wasn't sure how the ascent up the headwall from Coire Leachavie would be. Before I had even reached the main ascent past the moor, both legs had disappeared down a hole in the snow with another lovely crampon spike scar added to the back of my calf to join another from years prior. The main ascent without gaiters was hell - ice and snow getting into my boots and making it generally quite miserable. The conditions were pretty rough - the path was buried under snow so route finding was.. fun, and it was a big slog up to Sgurr na Lapaich, and over the ridge to Mam Sodhail. I started getting a bad feeling the closer to got to my target.. firstly, my planned descent route - the headwall above Coire Leachavie - resembled nothing more than a vertical wall of snow. Yikes. Secondly, as I got close to the final ascent up to Mam Sodhail, the ridge looked like this: Hmm.. not great. I got right up close to it to see if I could just wing it but it was just a narrow point of snow all the way up and my inner hazard warning buzzer was screaming, so in the end I just aborted and trudged back along the ridge to return the way I came. 8.5 hrs after setting off, I arrived back to the car - cold, wet, fresh hole in my calf, and thoroughly annoyed. Oh well, at least I lived to try again!

More fast forward noises to today - my third attempt at this infernal mountain!

I had set off reasonably early and managed to arrived into the River Affric car park around 7am - just 3 hours after leaving the house. It was looking like a fine morning and Loch Beinn a Mheadhoin was very still: Loch Beinn a' Mheadhoin from the roadside

After arriving, I quickly booted up, ate some of M&S's finest sausage rolls and a banana, and went to pay the parking fee.. or not! I mean, it's only a couple of quid anyway, but still - a good start to the day. And so barely 10mins after arriving, I set off along the road: I made pretty good progress, and looking back along Loch Beinn a Mheadhoin towards the car park was worth capturing on camera: Looking back over Loch Beinn a' Mheadhoin to the car park

I wasn't actually sure which direction I was going to go this time, part of me wanted to repeat the previous attempt insofar as to head up the decent path before the Lodge (pretty much exactly 1 mile from the car park) , but I decided to get the longer walk in dispensed with, rather than leave it as a longer walk out - as we all know, a 3.5 mile walk-in can turn into a 7mile walk-out.

After the farm, where I used the bypass path around the property, I re-joined the track along the north side of Loch Affric, and Sgurr na Lapaich came into view: The path was quite pleasant, although I wouldn't be a fan of cycling it - late last year, I had a pretty big day doing the Altbeithe munro trio from the same car park, and used the track south of the loch that time - definitely a better cycling track. It was a good walking path though, with lots of little burns flowing down off the hillside: and it made for some good progress on foot - no real boggy bits or overly rough sections: even better were the views that constantly caught my attention as I walked along: Looking over Loch Affric towards Kintail

After 3.5 miles (just over an hour of walking), i reached the start of the ascent, marked by a small cairn, although the ascent path is quite obvious: This was also a great path, loosely tracking the Allt Coire Leachavie up at a fairly shallow ascent angle, taking me from around 260m up to the Coire headwall at 900m. You can see the path in this pic winding up to the right of this pic: On the rather excellent path up to Coire Leachavie

At around 700m, the path levelled off through a small boggy section - no real issues, and my target summit finally started to feel a bit closer, although at this point, it had a little bit of cloud hanging over it: I was really quite enjoying this walk - the 3.5mile walk along Glen Affric was nice enough, but this path up to Coire Leachavie was stunning - with the Allt Coire Leachavie tumbling down what seemed like endless waterfalls: The Allt Coire Leachavie tumbling down from the coire

Above 850m, now well within Coire Leachavie, the path came and went in between some boggy sections, but it was fairly easy to keep on track - head towards the headwall at the top end of the coire. The route up the headwall wasn't very clear from below but the zig-zag path revealed itself as I got close, and what looked like a horribly steep section of ascent, turned out to be fairly benign, even with a large section of snow covering some of it near the top: 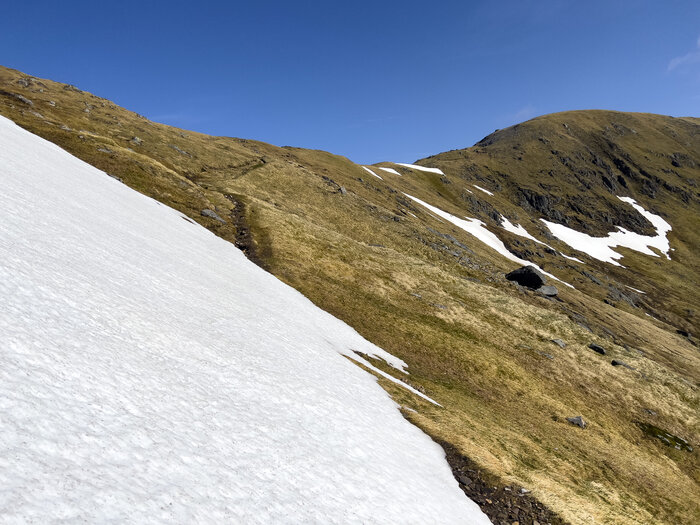 On the final section of the headwall above Coire Leachavie

And looking back along the route of ascent so far: Looking back down my route of ascent

On reaching the top of the headwall at just over 1100m, there was just a small section of broad ridge to traverse, and a rocky ascent of around 70m up to the summit. And what a summit it is! Quite an impressive summit marker on Mam Sodhail!

I did climb slightly to peek into the summit - it is hollow, but with the only entrance being from above, I decided standing next to it was enough for me: Up to this point, It had been a fairly sweaty ascent - with some spf30 on my neck, face and bare lower arms, but up on the summit, a cold wind started turning my sweaty clothes into ice packs, so I quickly took some pics before continuing on:

Looking over to Mam Sodhail's big sister (or is it brother?) Carn Eighe: Looking over to Carn Eighe

And so on I went. I was rapidly approaching the section of the ridge I had turned back on 5 or 6 months prior, and looking along the ridge towards Sgurr na Lapaich evoked some feelings of familiarity - even though this felt like a completely different ridge this time. The ridge ahead over to Sgurr na Lapaich

And indeed it was like a different ridge - without the snow and ice, and with a visible path, the going was great - I actually enjoyed it this time! Despite the few descents and re-ascents, it wasn't too much longer before I was looking back over the ridge back to Mam Sodhail from Sgurr na Lapaich: Looking back along the ridge to Mam Sodhail

and onto the final main descent. What was previously a tough, treacherous mess of snow over rock, was now a pleasant (albeit steep) path down to the moor below: Descent down to the bog.

I reached the descent track at the other end of the moor (bog) without any difficulties and stowed the gaiters and poles for an enjoyable walk back down to the loch side. Once I reached the road down by the lodge, it was a nice 20-minute walk back to the River Affric car park - and a decent total walking time of just over 6 hours.

So in the end, a mountain that was starting to become my nemesis, actually turned out to be one of my better hill days after all


Ey up! Two from Inverey via bike.

Fisherfield 6 - many midges and a late escape.