The Cairngorm plateau is the highest region over 4,000 feet in the UK. It includes some of the largest Munros in Scotland such as, Ben Macdui, Braeriach, Cairn Toul, Sgor an Lochan Unian (The Angel's Peak) and Cairngorm all in the top 10. One of the most spectacular walks in the region, and possibly in the whole of Scotland, is the Cairn Toul ridge. The ridge walk logged here takes in Carin Toul, The Angel's Peak and the Devil's peak, but misses out Breariach which is too far away for a single day. However summiting the three munros and missing out braeriach is a much more manageable distance to walk.

The route begins at the Linn of Dee car park west of Braemar and continues 3 miles north to Derry Lodge and is best tackled on bikes until reaching the lodge. Follow the signs marked 'Path to Glen Lui' out of the car park heading roughly north and follow a well made, cycling friendly forest path. After just over a mile through the forest you will meet junction joining onto a more well made land rover path. Take the left hand path heading again in a northerly direction. This track is again suitable for bikes and takes you directly to Derry Lodge. The path toward Derry Lodge

Continue past Derry Lodge until you cross a narrow bridge over the river. From here there are several paths leading away from the bridge. Take the left hand path and head down the glen in a westerly direction. The going at first is hard as a crossing of a boggy area is required for a few hundred metres yet after that the path is fairly straight forward. After just short of two miles the path crosses the Luibeg Burn. Crossing this burn is fairly easy but a bridge is situated somewhat higher up the burn to the north yet most walkers chose to simply cross the burn themselves. The path on the far side of this small crossing continues around the lower slopes of Cairn a'Mhaim and keeps heading west until turning a bend and heading north parallel to the River Dee and the Lairg Ghru, this turn reveals the steep rocky face of the Devil's Point but fear not the route does not go up the face. Eventually, after 4.5 miles from Derry Lodge the path joins the Lairg Grhu for a short time before turning left (again west) and crossing over a small bridge toward Corrour Bothy. This section is very steep and very fast but has a well made path to keep you right. After having crossed the River Dee and stopping at the bothy for some shortbread take the only path toward the obvious ridge line between Devil's Point (on your left to the south west) and Cairn Toul (on your right toward the north west). Separating these two stone giants is a large water fall called the Alt a'chorie Odhair. The path heads west following the river closely all the way up to the waterfall along a well made path. Just below the ridge line cross the waterfall, this sounds worse than it is but do not worry the river here is shallow in sunny months but take caution there is a bypass path above the waterfall but it is not very useful. After crossing the waterfall there is a short scramble to the wide ridge line separating the Devil from Cairn Toul. Turn left on the ridge and head south East here going toward the obvious peak of the Devil's Point. To the summit there is only a half a mile walk with not much climbing to be done. Be cautious around the Devil's Peak the name says it all about the cliffs on the south and east. 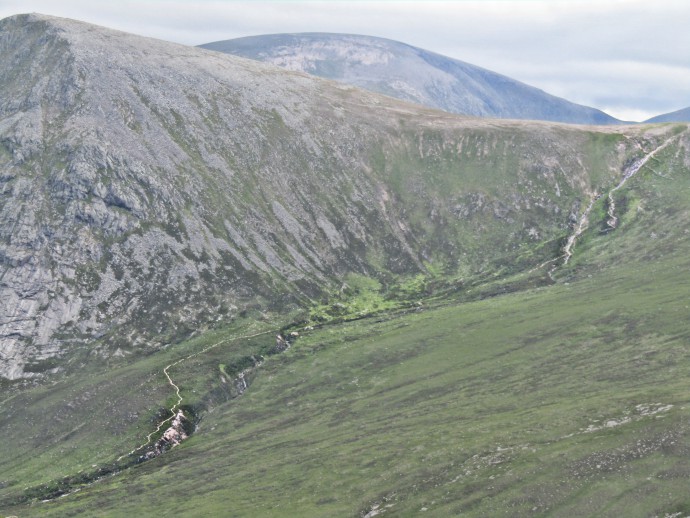 This section is most likely the highlight of the walk. A spectacular ridge gives amazing views of the Lairg Grhu, Ben Macdui, Ben Nevis and the Mamores. Leave the summit of the Devils point the same way you came up and retrace your steps to above the waterfall. After coming back to the waterfall at the top of the ridge where you left to climb Devils point head north to north west toward Carin Toul. There is a path that is on your left when heading toward Cairn Toul but this path is tricky to find and a ascent along the ridge line is more convenient and provides better views. This section is steep and bouldery and ensure you stay far away from the steep edges of the ridge to the north on your right as you climb. One you have climbed this rocky section and ascended to the top of Stob Coire An T-saighdeir at 1213 metres. This is a satellite summit of Carin Toul around half a mile away to the north. Descend a short way to the ridge line between here and Cairn Toul at 1160 metres and continue around the ridge above the corrie below. From here begin the ascent of Cairn Toul's true summit at 1291 meters or 4,236 feet. There is a path here that goes to the peak and is best to follow. However, the ascent of Carin Toul is fairly straight forward, just avoid the several hundred meter drop to the east on your left. While this is a sharp and rocky ascent it is short and the ridge is only exposed on the east side while the west side is broad and doesn't present much danger. Scramble to the top of Cairn Toul and celebrate with some well earned lunch. You are now at 1291 meters high and on the 4th highest peak in Britain. Cairn Toul gives you an excellent view of Britains six highest mountains Braeriach, a massive plateau to the north, Ben Macdui to the east beside Cairngorm, and Sgor An Loachan Uaine to the west, the next top. 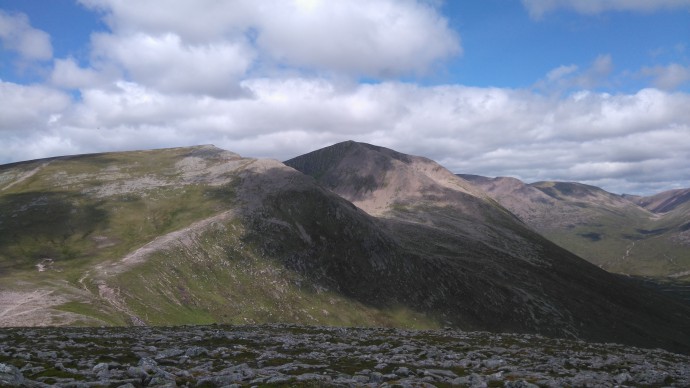 The path to Cairn Toul in the centre of the photo. The hill on the left is its satellite peak which is climbed before getting to the top of Cairn Toul.

If your legs are feeling up to the just over half a mile hike out to the Angel's peak begin by descending to the west toward the summit. You have to descend along the ridge line toward the Angel's Peak keeping above Loachan Uaine below you, a spectacular loch an sitting between Cairn Toul and the Angel's Peak. After descending the bolouderly back of Cairn Toul continue to the next summit ahead of you now to the north west. This part of the ridge is far less rocky and is a gentle climb to the top of Sgor An Loachan Uaine. The small peak a few metres from the top sticky out above the lochan below and offer very special views for the braver of walkers to enjoy but pay attention to the several thousand foot drop on all sides. The angel's Peak was made a munro only in the 90s. It is a very unique top with sharp drops on its north side and provides the best views of braeriach, its larger brother. The summit clocks in at 1258 meters and is Britain's Fifth highest mountain. 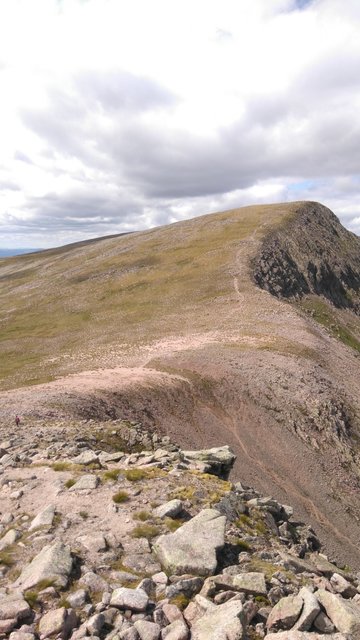 The path toward Angel's Peak (Sgor An loachain Uaine) as you can see it is fairly easy going from Cairn Toul to the Angel's Peak. 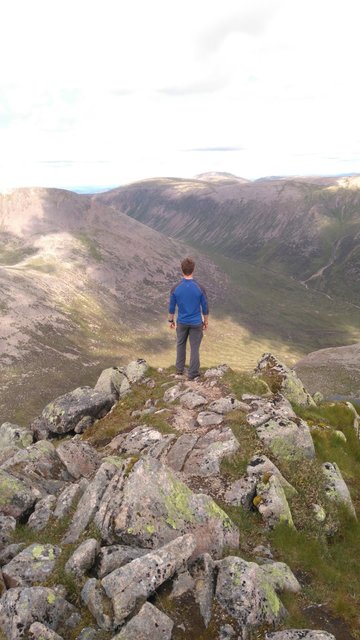 The peak on Angel's Peak sticking out over the edge

This route suggests you turn back here and do not proceed to climb the distant Braeriach which is easier to climb from Avimore. Turn around and retrace your steps off of the Angel's Peak to the bealach between the Angel's Peak and Cairn Toul. You can easily circumnavigate the top of Cairn Toul and opt for the lower path which goes around the west of Cairn Toul and brings you to the south side of that munro avoiding its summit. From here directly retrace your steps back to below the Devil's Peak and descend back down the waterfall toward the corour bothy.

Disclaimer:
This walk, while spectacular, is not for the faint hearted. This is a long 23 mile, 10 hour day ou on some of Scotlands largest and most remote munros. It requires great confidence, good navigation skills and good strong legs. I do not want to put anyone off as it is a great walk but ensure you have climbed at least 50 Munros and done a few long days out, perhaps summit Ben Macdui to get a lay of the land. Do not attempt Braeriach as well unless you are very experienced a very long days out the best thing to do is return from Angel's Peak and get it all done in just one day, enjoy the walk.
Click to mark this as a great report. Register or Login free to be able to rate and comment on reports (as well as access 1:25000 mapping).

beeing turned back off cairn gorm