Duddingston and the Innocent Railway

I was tired of having nothing to write up, so I decided to set out for one last little stretch of the John Muir Way, beyond where I'd picked up the new stretch where it meets the canal, earlier in the year.

I've generally been walking west, even if not in order, so to pick up the JMW at Duddingston my plan was to go over what looked like more or less like the middle of Arthurs Seat - right down to the bottom of the oddly quiet High Street and past the parliament into the park, and onto the path behind Long Row. 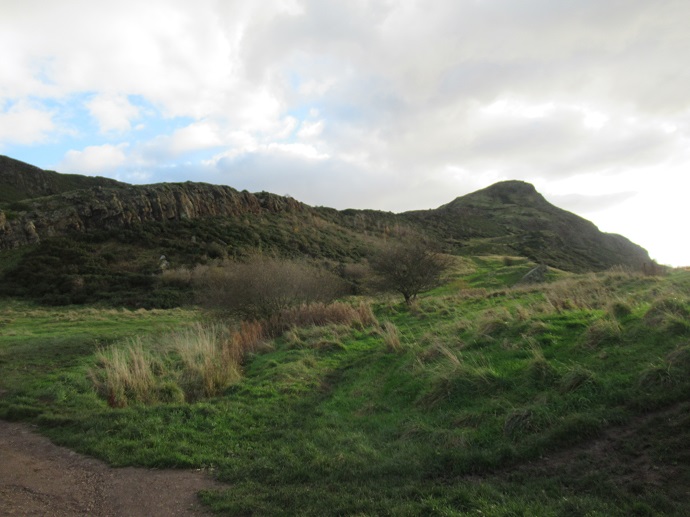 I climbed up to St Anthony's Chapel to eat my lunch - scenic in the sunshine. Crows and magpies gathered round on the rocks, but did nothing worse than stare at me. 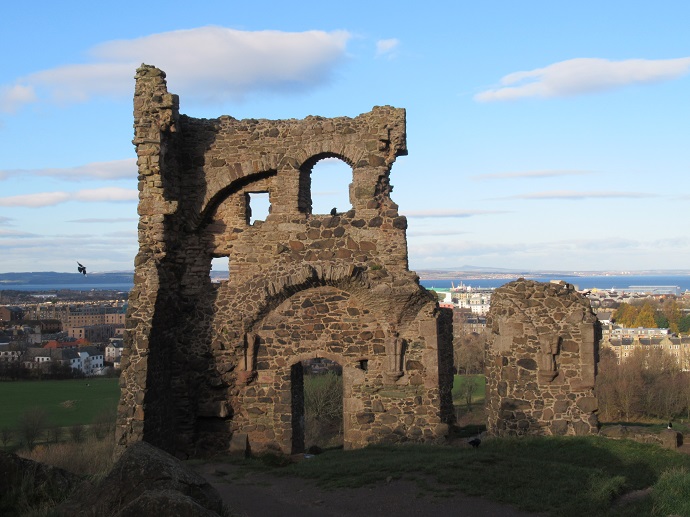 From the path through to Dunsapie Loch the summit of the hill stands above quite an impressive corrie - I don't think I'd ever been round this side of the hill until fairly recently, as I tend to go round or over the Crags if heading for Holyrood. 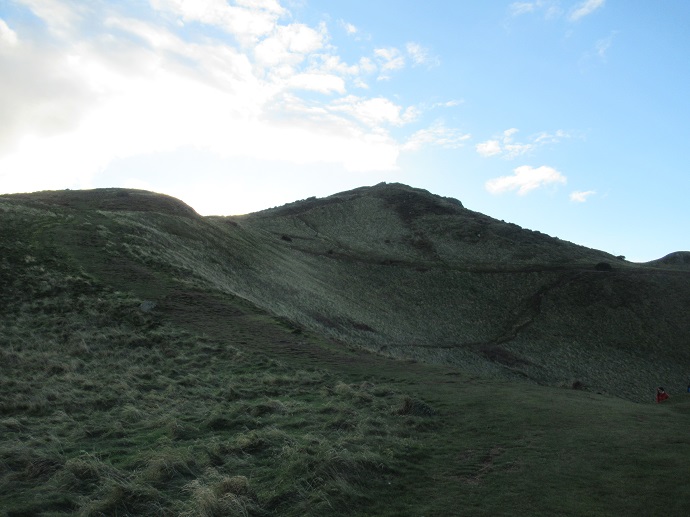 Once I was over the high point of the path the oddly shaped little Dunsapie was in view below, and beyond it the East Lothian coast stretched out in the sunshine. 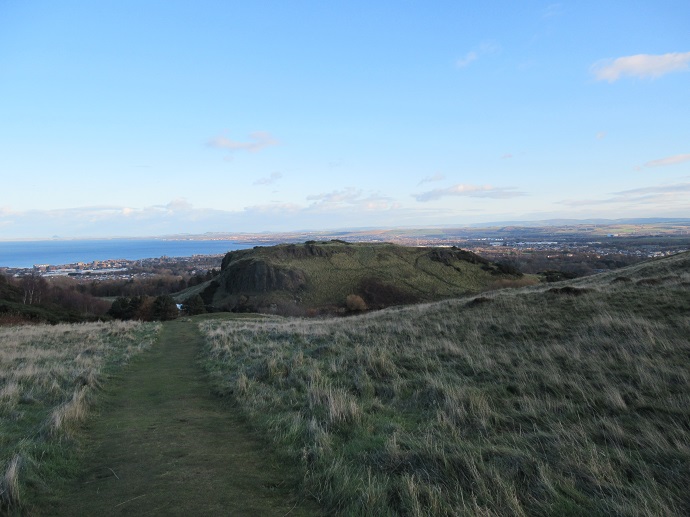 The little loch was very pretty, but not so pretty that people would be standing staring at it. 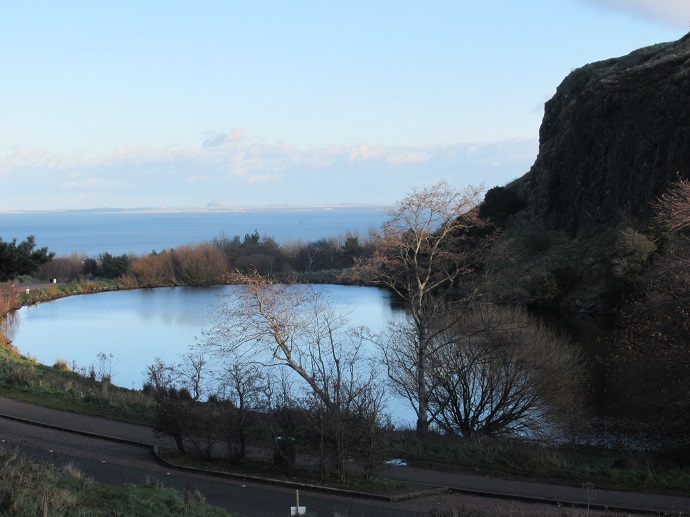 It turned out they had a reason, however, as an otter was doing a kind of vanishing and reappearing trick all over the loch. 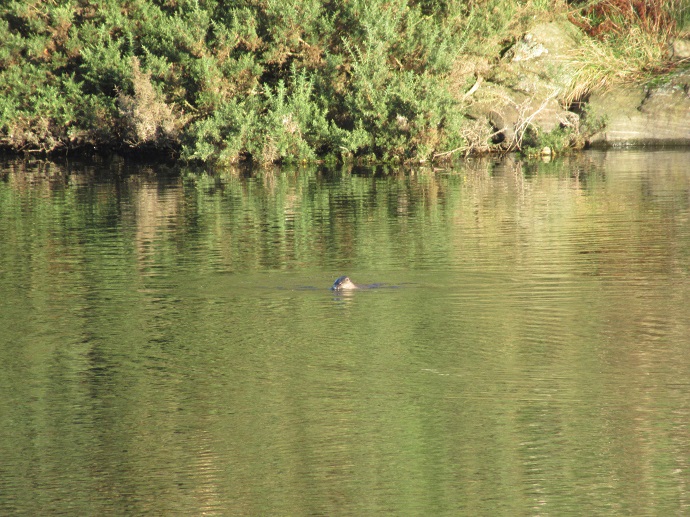 From here a path led down past some lovely autumnal trees to reach the road just by Duddingston Loch. 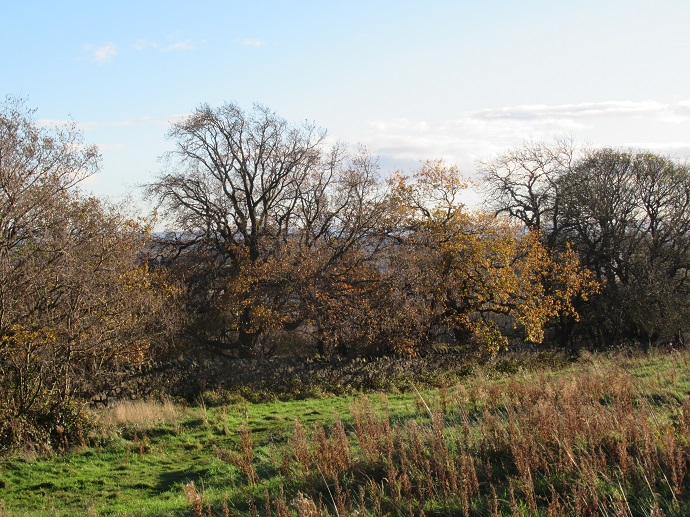 It was also lovely - not at all a city view, with the Pentlands rising beyond - but the sun was so directly behind it that it didn't photograph very well. It was definitely a winter afternoon by now - not bitterly cold, but with the low slanting sun. 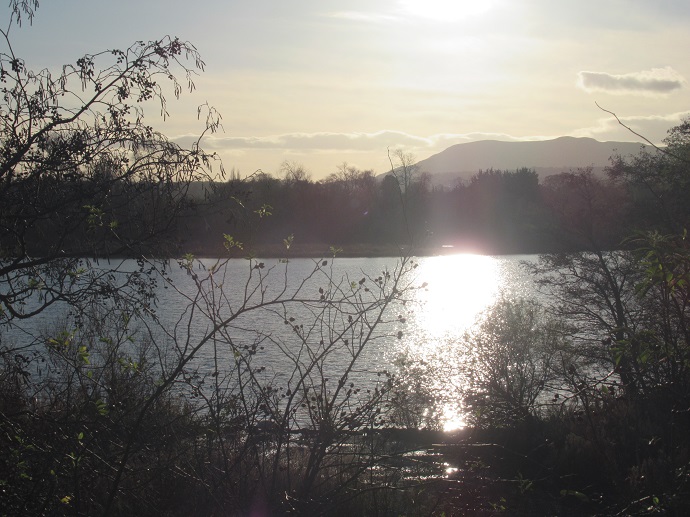 My way on was really straight down the road beside the loch, but I took a detour first into Duddingston village, where I couldn't remember being before - because of where it sits behind the hill it has stayed more neatly tucked together than most of Edinburgh's old villages, with two streets of old houses, a very old pub, and a medieval church made of the kind of stone which glows warmly in the sunshine. 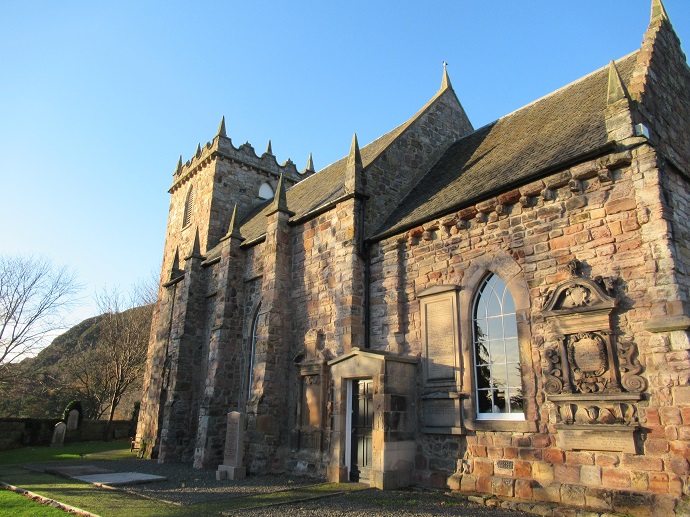 The road skirts round past the modern school, and a nature reserve which was locked up, and the pavement ran out at a very sharp bend where it wasn't all that easy to get to the other side.

Further down this road I finally joined the John Muir Way, although to be honest most of the day's excitement was over by then. The path here is the old Innocent Railway, which linked Dalkeith and Edinburgh with horse-drawn wagons - innocent probably just because it was rather unsophisticated by later standards, although I like the alternative explanation that it was because they never issued tickets to passengers (explaining that it was because the passengers often hadn't made up their minds where they were going). 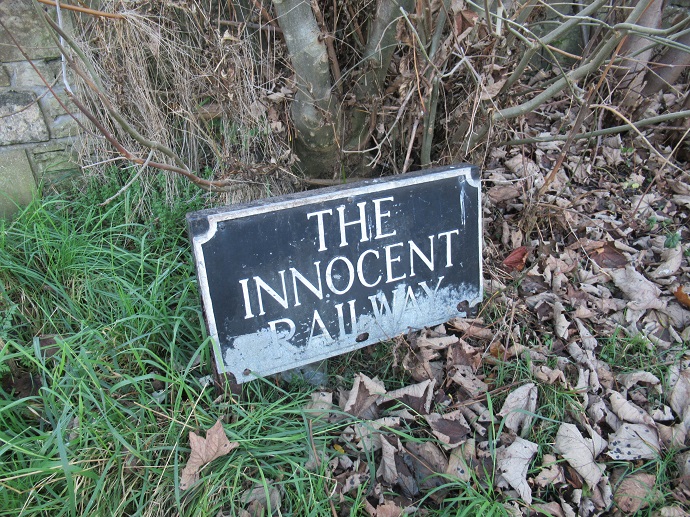 There's also the remains of an interesting old bridge here, where the track crosses a burn. 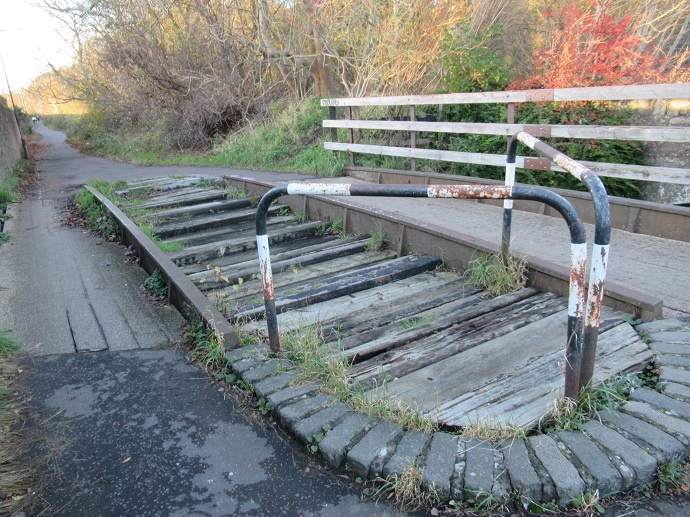 But although this stretch looks quite scenic on the map, between Duddingston Loch and the Prestonfield golf course, on the ground the path ran between a hedge and a high wall which blocked out the sun, with only the steep slopes of Arthur's Seat for a view. 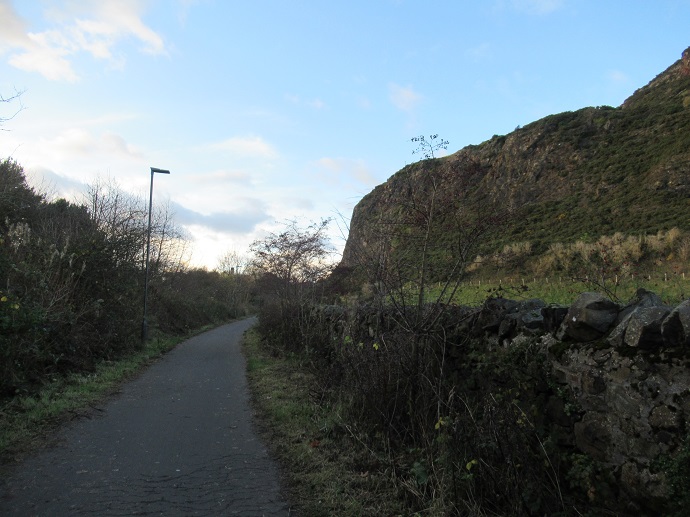 The back of the hill

Eventually there were some little ponds on the left, and the main path vanished into a long tunnel instead - the JMW obviously didn't, as its little picture was missing from the signpost, but there seemed to be nothing to say whether it climbed the steps beside the tunnel or took a gentler path over to the left. I went for the steps, which I think was wrong, but they turned out to join up again quite quickly. 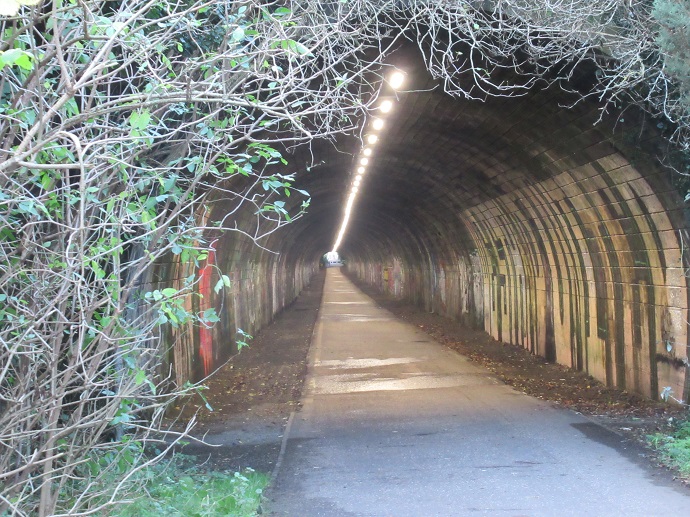 I was back on the path parallel to the Holyrood Park road now, leaving Arthur's Seat behind and looking to the Crags ahead. 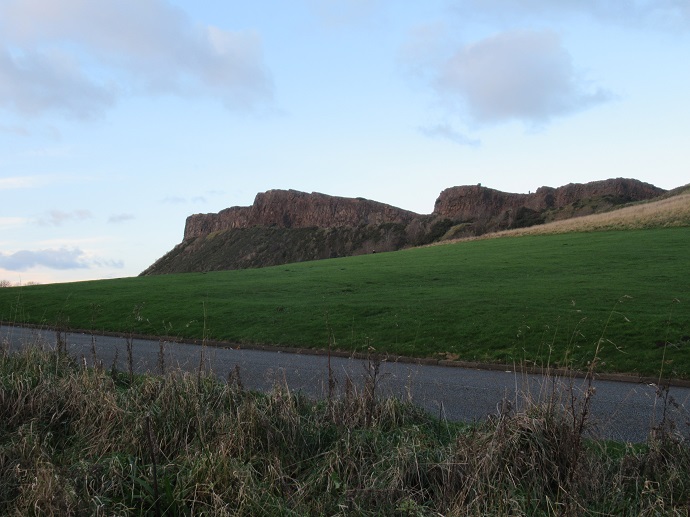 The route led out of the park by the road, and past Pollock and the Commonwealth Pool to the main road, and on again to the junction at the Meadows - nothing very exotic there, and the path then kept to the worst bit of the Meadows, tucked between the houses and the busy road. 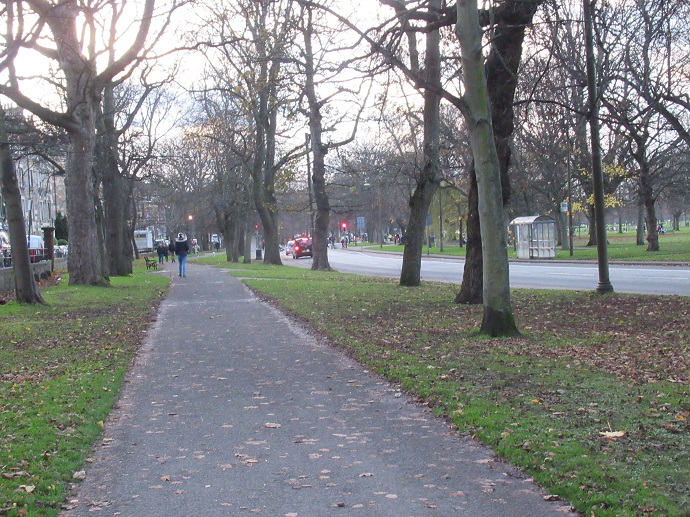 Brunstfield Links was better - more space and fewer cars, and the old 'short hole' golf course laid out to the right, and even two golfers playing on it. 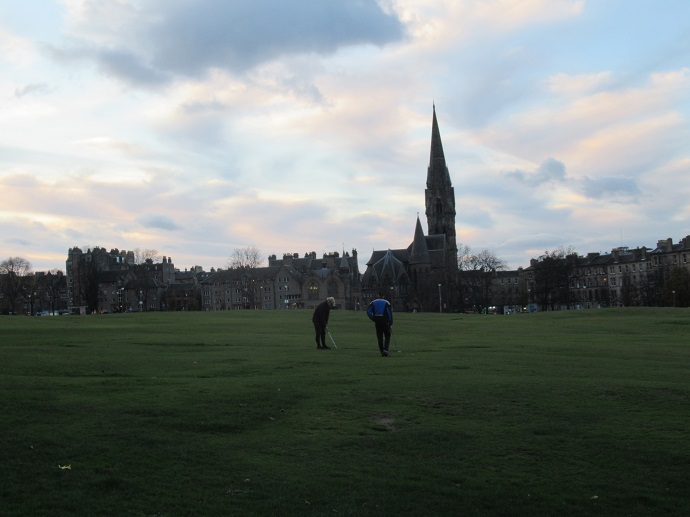 The other half of the Links looked peaceful and autumnal, with families and others strolling about. 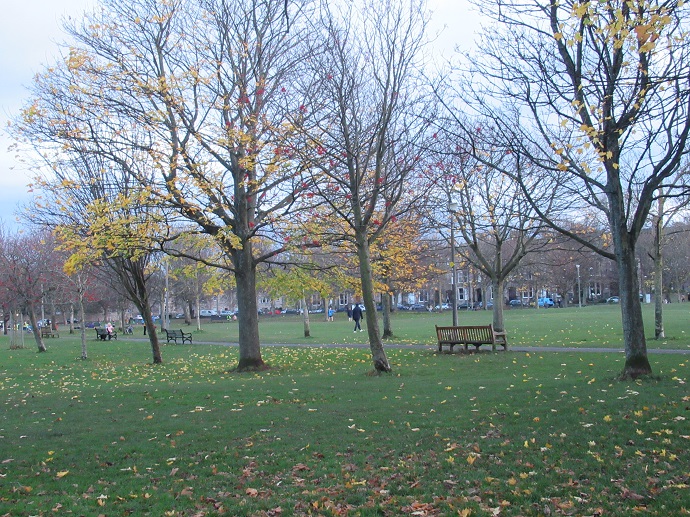 Autumn on the Links

From there it was straight downhill to the canal, and through the last narrow street on the other side of Gilmore Place to the Leamington Lift bridge. This is where I joined the John Muir Way on my walk along the canal earlier in the year, so it was where I could leave it again and take the most direct route home. 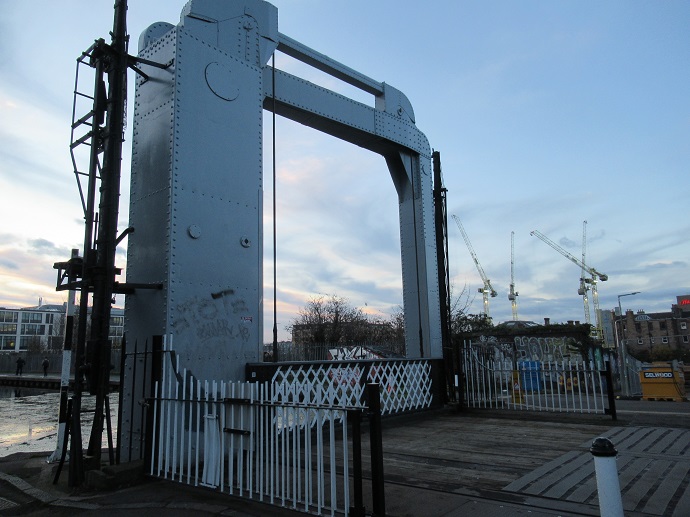 Back at the canal

A nice day, with the hill and Duddingston, but I have to say not the most interesting stretch of the John Muir Way. Hopefully at some future point I can combine the missing bit between Fisherrow and Duddingston with a trip to Newhailes.
Click to mark this as a great report. Register or Login free to be able to rate and comment on reports (as well as access 1:25000 mapping).


Autumn by the Almond