Unshackled from the straightjacket of a diminishing list of unclimbed Munros, I can now enjoy the luxury of choices.

Which glens to aimlessly wander; which routes to repeat with relish; which views to revisit in a different light; which hills to enjoy rather than endure.

Glen Etive is becoming my go-to-glen, in both body and spirit. Daydreams recall summer student days sweating on the slabs of Beinn Trilleachan: skinned knees on Spartan Slab and wondering if I had the cojones for Swastika – no I didn’t. This was going to be my fourth or fifth visit of 2019, and I had choices.

With the jet stream recently dragging cold, settled air south, a penetrating frost had brought those hills with the boggier approaches into play. So, with a forecast of bolt-on sunshine and just a gentle breeze brushing the tops, why did I do this?

The Corbett, Beinn Maol Chalium, lurked above the tree-line and would have easily added to my tally – but that was slipping back into a bagging mindset. The day was too short to make Beinn Trilleachan anything more than an out-and-back, which rails against my circular route mentality.

Ben Starav offered coastal views, had been flagged up first time round as a possible return, and had an alluring, if strenuous, approach up its north ridge. If legs and lungs allowed, there was even the opportunity to extend the day to include Glas Bheinn Mhor. And the short bog-fest beyond the Coileitir cottage should have been hardening up nicely. 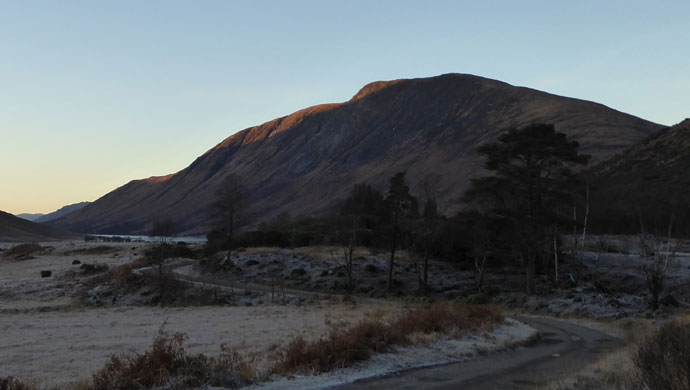 So, what went wrong?

I either got up too late or spent too long savouring the tea and bacon roll in Tyndrum. As a result, even by 8.45am, all the parking spaces for over half a mile along the road had already been taken. So that was at least a mile added to the day’s exertions. Having only been out for half a day since the beginning of September, this year’s hill-fitness was a thing of the past, so I suspected this would come back to bite me at the end of the day.

What was that about the alluring north ridge? Well, it was six years ago, using younger legs on a balmy day in mid-June. Forget winter not starting officially until the next day; it had hit minus 6 while crossing Rannoch.

Having crossed the Allt Mheuran, it was obvious that the sun would be spending very little time, if at all, warming the side of the ridge along which the path rose. While the frost hadn’t quite got to grips with the cottage detour gloop in the glen – I post-holed once into a patch that had been reluctant to give up its moisture – it soon got to grips with me. Wrap up and take a cold, slow plod, or speed up, warm up and burn out? Choices, choices. Just get on with it. JFDI as I used to bark at work.

Glen Etive from a slightly warmer spot on the north ridge With just a couple of hundred feet to go, when the rime encrusted boulders needed some care to negotiate, I finally emerged into the sun. But it was so low I couldn’t see a thing. Still, it felt churlish to start complaining. I was at the top now and it was time to start appreciating things rather than grumbling.

Bidean, the Ben and beyond from the summit of Ben Starav - and all is well in the world again - for a while Ben Starav's south summit across the rim of the corrie's headwall 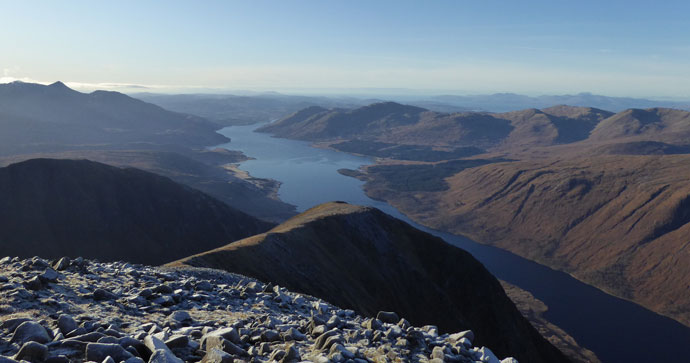 Out along a chilly Loch Etive to the coast

After making the best of the hoped-for views, in low sun and biting cold, I set off for the south summit, at which point the Law of Mr Sod intervened. In what until then had been a cloudless blue sky, a thin skein of cloud drifted across and lingered on the plateau. Where had that come from?

I was in no mood to explore the atmospherics giving rise to the cloud’s arrival but, every cloud has some sort of lining. This one revealed an unexpected brocken spectre. 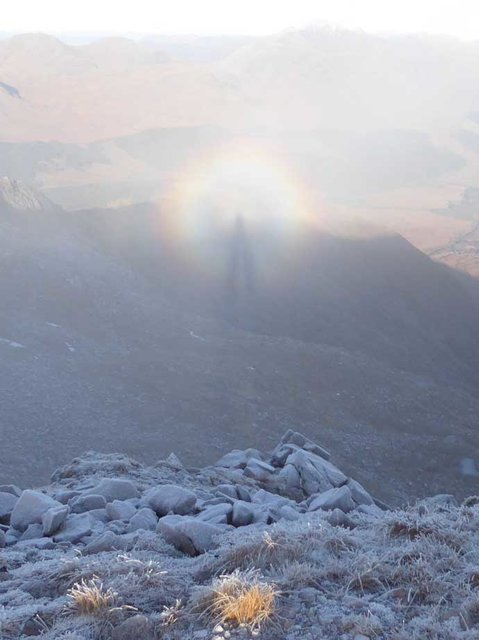 No matter how often you experience them, they never fail to intrigue, amuse and inevitably provoke a burst of foolish flailing. They can even make your day.

But now it was time for choices again. I was definitely not being lured across to Beinn nan Aighenan. I’d been bitten by that one on a previous visit and it had wrung every ounce of energy from me. “Just pop out and take it in,” someone had glibly suggested: sadist. During the descent to the bealach below Stob Coire Dhierg, Glas Bheinn Mhor was removed from the agenda as well. Although the sun played attractively on its slopes, legs were starting to tire. I recalled this descent as being somewhat tortuous before. With the added complication of sheets of water ice lurking under stretches of steep grass, I adopted a ginger approach.

By the time I stood at the bealach, “aspect” reared its ugly head again.

A tunnel of shadow and gloom lay between me and the car. I’d only been out in the sun for barely an hour. What made things worse were my knees. They’ve played up a few times recently, not as a result of a lifetime climbing hills and mountains, but a lifetime coming down them. OK, a few decades of road running might not have helped either. 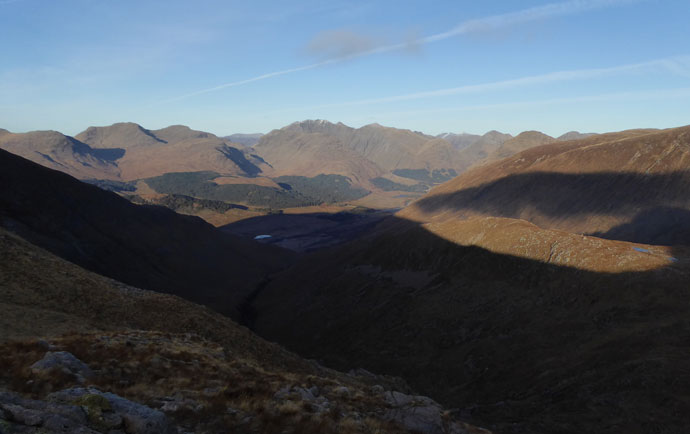 The way home - down a gloomy glen towards Bidean

Anyway, as the impact of age quickened, I slowed.

Taking it easy took me ages to get down.

And there, ahead, taunting, gloating and rubbing salt into a wound that was becoming sorer with every step, was that tidy little Corbett across the glen, Beinn Maol Chalium. It had basked in the sun all day, finally glowing with rich autumnal colours in the late afternoon sun. Beinn Maol Chalium gloats in the early evening sun - well, you chose to shun me!

Well, you can’t get all the decisions right.

But the day had not finished, one cruel twist awaited – and I could see it coming from a mile away.

I opted not to dance or boulder hop across the stream. I suspected that cutting the boggy corner across to the Coileitir cottage might just lead me into a final, dispiriting knee-deep plunge. I decided to be sensible and use the footbridge a few hundred metres further downstream.

The ultimate insult was to find myself just a couple of hundred metres from the car, with no means of crossing the River Etive.

I just knew that last half mile was going to come back and bite me and it did.

Thank goodness for the brocken spectre. I always think they’re messages of welcome and permission to be there.
Click to mark this as a great report. Register or Login free to be able to rate and comment on reports (as well as access 1:25000 mapping).


An Interval Act on Beinn a Chuallaich

Limbering up on Am Bathach

Am Basteir: an Executed Circular Compleation