Arkle plus … rained on; reined in

Since I spent time on Arkle, before our dry summer slumped sodden into autumn, we’ve been treated to a clutch of reports from its flanks. As a result, there’s little need for a description of the estate track winding past the shores of Loch Stack, arriving at the jumble of buildings at Lone. We’re all too familiar with the rite of passage between the iconic boulders and through the rowan and birch beyond. The gently rising slopes and increasingly stony ascent have been captured by BP and others, as has the swoop, curve and clamber along the final stretch of ridge to the summit. Instead, I’ll dwell briefly on a personal motivation for the trip, a decision made and an outcome that wasn’t quite as I’d hoped: but what do expect when you dally with the gee-gees?

I was born and brought up within sight of a racecourse; if I turned left at the end of my road, there it was. Our year pulsed to the rhythm of race meetings, the crowds they drew, the buzz in the town, and the marketplace tipsters yelling “I gotta horse, I gotta horse.” I’d stand by the rail early on an autumn morning and feel the visceral thrum of approaching hooves as a string on their gallops appeared from the mists still clinging to The Town Moor. The heads of tweed-clad trainers nodded or shook as their prospects cantered past a furlong post and disappeared back into the mist.

As a child of the 60s, familiar with a double Cheltenham Gold Cup winner and the freakish success of a chaotic Grand National, the only surprise is how long it took for paths to cross when I later turned to mountains. They’d long been on my radar, glimpsed on a distant horizon or pondered over while flicking through guidebooks. Neither were to be a passing grab en-route to something else; they were thoroughbreds to be savoured.

And what better place to revel in such quality, and to experience their breeding, than on the very top – staying all night.
My style on earlier overnight jaunts this year has been to go light, shunning cooking gear and stove: that morning mug of tea wasn’t essential. This time, the tent got left behind: the bivvie bag would suffice. A tent-sized patch of grass amidst the shattered rubble of the summit ridge offered what I sought: sunset and sunrise.

As darkness finally enveloped me some time after 10, I got the iPad out and watched a couple of episodes of a BBC series on Hemingway – bizarre, I know. En plein air - a soft patch, a wee wall and Meall Horn in wisps of cloud beyond the sunlit southern summit of Arkle 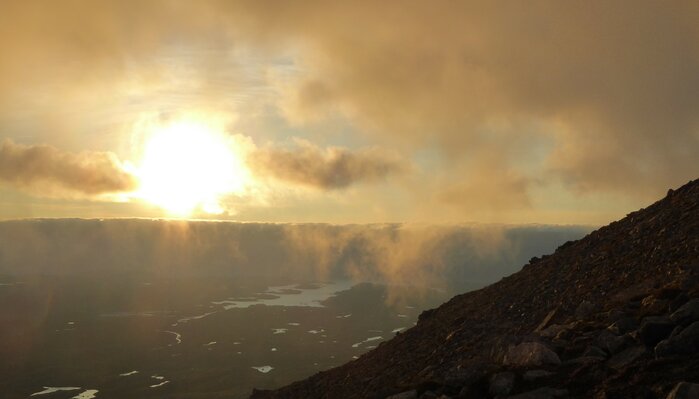 ... compensated by a surprising brocken spectre in the other direction ... before ...

... things settled down to their normal hues

I woke to a hiss. A swarm of midges, I suspected, having caught the scent of potential breakfast blood. It was just gone 5. Safe behind a midge net, and comfortably cocooned in breathable green nylon, I hunkered down for another hour. I had plans and they could wait.

Instead, at 6 a dampness brushed my cheeks as I peeped out again, and saw just grey.

I was swathed in a thick grey drizzle.

My plans and expectations, like the punctured hopes of punters watching the favourite come in a distant second, were laying like the litter of torn betting slips after the last race.

“Rain before seven, fine by eleven,” my mother used to say, chirpily, as we sat at breakfast listening to the rain hammer down on our caravan roof.

So, as I was warm and dry, there seemed little point in moving. Another burst of Hemingway and I’d wait for things to improve. The reason you have plans is to know what needs changing when things go awry.

I emerged at 9. It was still grey but at least the clouds were now keeping the moisture to themselves. Shaking and rolling the bivvie bag was quicker and simpler than extracting pegs, collapsing poles and folding one skin of tent inside another and I was soon off toward Bealach Horn where a decision would have to be made.

Foinaven, twisting and mysterious, remained hidden to the north: the hump of Meall Horn slumped in the south-east. Two out of three wouldn’t be a bad return, but which?

One was an obvious candidate for a future traverse, preferably on a stunning day with spectacular views. The other was never going to be anything more than a quick scale, tick and descend. Which would be worth returning for in better circumstances? It was a no-brainer.

Foinaven remained in the clouds as I sat by the cairn on Meall Horn, and its roller-coaster ridge remained stubbornly hidden as I descended the spur of Creachan Thormaid. Looking back to Arkle from Meall Horn - predominantly grey

Of course, the weather improved as I drove south, but the 100-1 shot promises an even better return in the future.

Ever hopeful.
Click to mark this as a great report. Register or Login free to be able to rate and comment on reports (as well as access 1:25000 mapping).

Two Hills Short of a Bedroom For Ardgour Sunrise