My 2017 trip to Scotland took me to the North-west Highlands of Scotland, specifically Strath Carron and Torridon. Torridon was the aim for my week’s walking as it was and area I had never visited before and had been inspired by the pictures of Liathach, Ben Aligin and Beinn Eighe and wanted to see for myself.

Also, as I prefer using the train to get to Scotland, having found that the Inverness – Kyle of Lochalsh line running through Glen Carron gave two connection points within a day’s walk of Torridon it gave me the basis of the plan for this year.

Although I had read about the geology of the area it hadn’t really sunk in as to what this would mean close up, and this for me was the real bonus of the trip. The map for my five days of walking is shown below.


2017-Summary v02-crctd.gpx Open full screen  NB: Walkhighlands is not responsible for the accuracy of gpx files in users posts

My last two trips to Scotland have been dominated by the Cairngorm granites that originated some 430 million years ago and were then sculpted by the glacial erosion that followed as the granite became exposed to the atmosphere. The Cairngorms with its domed plateau and steep sides have the classic coarse boulder landscape (‘block fields’) and while they can be rough for walking have a certain grand majesty about them.

In contrast this year’s trip was to take me to a landscape formed of ancient Lewisian gneiss, Torridonian Sandstone and Cambrian limestone and quartzite.

The gneiss was formed some 3,400 million years ago and is a type of metamorphic igneous rock first created by ancient volcanoes in subduction zones where one plate of the earth’s crust is forced below another. Once below the surface the intense heat and pressure lower down in the crust (some 20 kilometres) leads to the metamorphosis of the rock to, over time, form the gneiss.

Tectonic activity over millions of years then forced these rocks to the surface where they were overlaid with the silt and debris carried down from mountain belts that surrounded them at a time when this part of Scotland and North America were part of a great supercontinent that lay south of the equator. These deposits formed the Torridonian Sandstones that were up to 5,000 meters in depth and can still be seen as a layer reaching up to a 1,000 meters in depth on peaks such as Ben Alligin and were deposited some 1,200 to 800 million years ago.

Some 545 to 495 million years ago a further layer of deposits on top of the sandstones formed the Cambrian quartzites, quartzites being a very pure form of sandstone. By this time what was to become the North-west Scotland was part of a major continent that included North America and Greenland. Cambrian quartzites are of direct sedimentary origin and were laid down at a time when this area was covered by shallow seas. In the geological formation further rocks were laid down on top of the quartzites, such as mudstones and limestones, but these have been eroded away leaving the tougher sandstones and quartzites on view.

The triple layering is seen clearly in mountains such as Liathach which is mainly formed of sandstone sitting on a gneiss basis, but capped off with a layer of Cambrian quartzite.

This layering all seems nice and orderly but then along comes something known as the Moine Thrust during the Caledonian Orogeny (mountain building period when tectonic plates come together) around 490 to 390 million years ago when England collided with Scotland, having been separated by a wide ocean up until then. The Moine rocks of the Northern Highlands which is the area to the east and south-east of Glen Carron were forced westwards and pushed into the rocks of the Northwest Highlands along a major fracture line in the earth’s crust known as the Moine Thrust, which in this area roughly runs along Glen Carron. The forces involved caused older rocks to rise up over younger rocks and fold existing rocks into a variety of shapes. This all took place some 10-15 kilometres beneath the earth’s surface and is only visible today as the layers have been thrust upwards and the overlying rocks are eroded.

This complex jumble of geology known as the Moine Thrust Zone is where my walk started at Achnashellach station.

After the overnight sleeper from London up to Inverness and followed by the Inverness-Kyle of Lochalsh train I alighted at Achnashellach Station at 10:30 on the Monday morning to a light rain and cloudy skies.

After crossing the railway line I followed the forestry track until it branched off left and through the gate in the deer fence onto the path that runs up in to Coire Mac an Leasgadair. After the edge of the forestry plantation was a bit of a steep pull up the path over the first half mile as I gained height. As I walked the cloud started to break and some sun appeared over Glen Carron and Loch Dughaill. The cloud base was about 900m and just clipping the top of Beinn Liath Mhor. 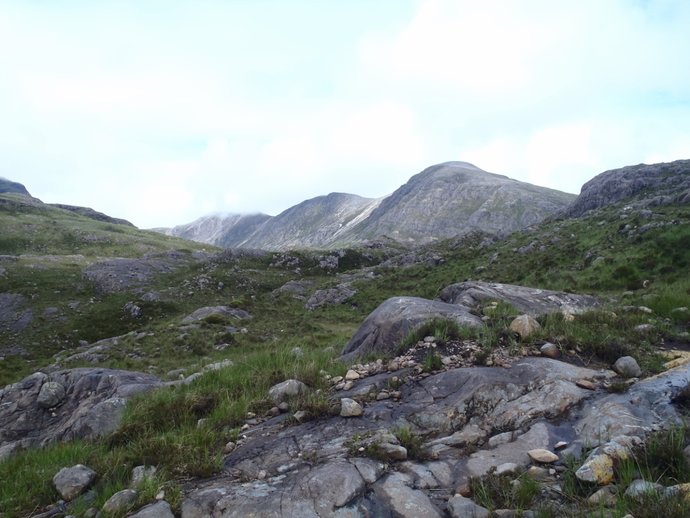 Ahead of me the path went deeper into Coire Lair passing between Beinn Liath Mhor on the right and Sgorr Ruadh on the left with the layering of the sandstone that forms the mountain clearly visible. Higher up into Coire Lair the cloud came in a bit behind me as this view back over Loch Coire Lair shows. Looking back to Coire Lair

As I approached the base of Sgorr Rudah the cloud came in further as I reached the bealach meaning that I stopped taking photos and concentrated on route finding. Underfoot the effects of the Moine Thrust were apparent as the rock changed from sandstone to quartzite and back again in noticeable bands where the thrusting had created an angled layer cake of rock types. Two hours later, having crossed over the bealach and making my way down towards Glen Torridon the Torridonian sandstone bulk of Liathach came into view as the sun started to break through the clouds. With Beinn Eighe in the distance. The view to Upper Loch Torridon opened up before me as I descend to what is best described as strath Torridon. A calm and still loch greeted me as I made my way to the campsite at Torridon. After a dryish night with only a little rain around 1a.m. I packed up and set off to walk into the coire running between Liathach and Beinn Alligin.

It was a still morning with barely a ripple on the loch. Having followed the Torridon estate track past Torridon House, as I didn’t fancy walking along the main road, things went a bit pear-shaped as when I got to Rubha Garbh Mor I couldn’t find the track marked on the map that could get me back to the main road. As the area was thick with bracken and rhododendrons I didn’t fancy forcing a way through, knowing I would likely only end up against a deer fence.

While pondering what to do I followed the well maintained path alongside the loch until I reached Inveralligin. According to the map Inveralligin promised a campsite but after a bit of searching and asking a local it turned out to be a bit of waste land behind an old croft. I’m happy to wild pitch in lots of interesting places in the hills and mountains, but in a populated area no thanks… Returning by the path and thinking I was likely to be back at Torridon campsite for the night, by some miracle on this pass through Rubha Garbh Mor I saw where the rather overgrown path joined the loch path.
This put me back on plan A and soon as I was at the linn and waterfall where the Abhainn Coire Mhic Nobuil passes under the main road. And a closer view… The sun was getting stronger and the views to the Horns of Ailligin and Beinn Dearg were excellent. From a geological perspective the sandstone layering is visible on these peaks as well. Horns of Ailligin and Beinn Dearg

As I pressed on into the coire Sail Mhor of the Beinn Eighe massif came into view. Having being delayed by 2-3 hours by my routing finding problems and detour I didn’t get as far as I wanted and had only reached Loch Grobaig and Lochan a Chorie Dubh at the head of the Coire Dubh path that would complete the circuit of Liathach, I looked for somewhere to pitch for the night.

Flatish and dryish pitches were hard to come by especially if I added the extra criteria of not pitching on rocks and it took about an hour and a reversal of route slightly back down the coire to find somewhere suitable. Suitable it was, set amongst the glacial debris in the Coire and with Liathach as the backdrop it was a beautiful place to pitch. 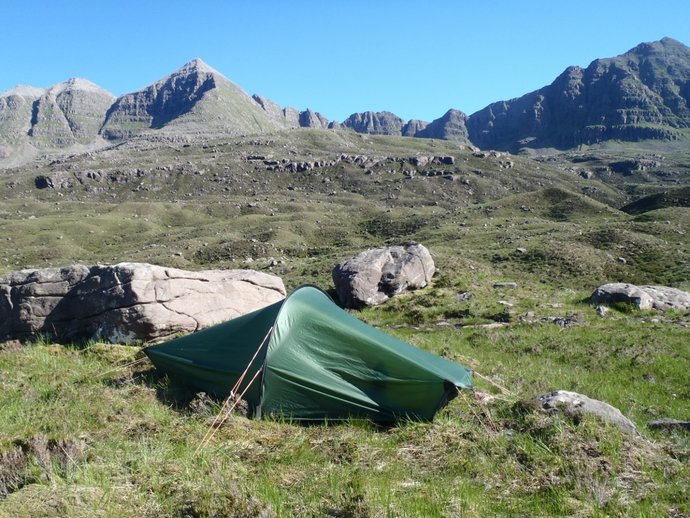 From the geological point of view the sandstone layering is visible and Liathach’s white caps of Cambrian quartzite can been seen on the peaks of Spidean a Chorie Leath to the left of the Liathach Pinnacles.

Overnight the gentle breeze blowing up the Coire turned into a strong blustery wind blowing in the opposite direction, but having pitched in the lee of one of the boulders I had a very comfortable night.

Day 3 dawned slightly overcast but after I packed up and got moving patches of sun broke through, interspersed with rain showers As I tracked back down the coire the cloud lifted and more sun came through, giving goods views of Beinn Alligin And back to Upper Loch Torridon As I reached Torridon the weather started to close in, becoming incredibly humid and leaving me expecting a heavy downpour along with thunder … but apart from a quick burst of rain nothing much happened. Back on Torridon campsite I watched as the cloud swirled round Liathach and wondered what sort of weather I would face the next couple of days as I to headed back to Strath Carron. Days 4 and 5 and my trip back to Strath Carron can be found here.
Click to mark this as a great report. Register or Login free to be able to rate and comment on reports (as well as access 1:25000 mapping).