When I climbed Ruadh Mheall from home, I didn't really have enough time to explore it properly, but I noticed that it looked down directly on Loch Lednock and appeared to be more accessible from there loch Lednock and Ben Chonzie from Ruadh Mheall
And as I have never explored the tracks in upper reaches of this glen I decided to do so on Saturday as the weather looked brilliant.
The car park at Invergeldie was packed beyond my imagination - cars on the verges hundreds of metres down the road, but I managed to sneak into a spot by the bridge that everyone else seemed to have missed

It is a shame that you can't drive further up the glen , but it's easy to see why this is the case

.
Nevertheless - great to see so many people out in the hills though I didn't meet a single one on my walk

I set off up the road, took the L turn signed to Ardeonaig, crossed the river and continued past a ruined house and back over another bridge Autumn colours at the start of the Ardeonaig road
Beyond the bridge where the road turns L and heads up the glen the map shows a path leading off, but I decided to continue up the road and find the other end of it on the way back Looking back down the valley from higher The track continuing up the valley leads towards Creag Ruadh 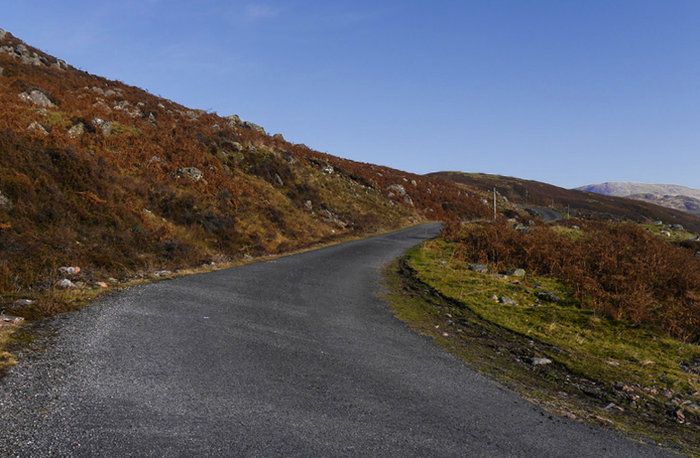 Looking back from the road junction, the whole of Ben Chonzie comes into view The road climbs a little further and then descends. Zoomed view - it looks as if the Clyde valley is full of mist When I reached the high point, I expected to look down on the loch - but there was a green valley

The water was mirror calm

Reflections in the loch
The road descends slightly and then heads North , above and parallel to the loch Looking North - Ruadh Mheall dominates the head of the glen Back down the loch towards the dam 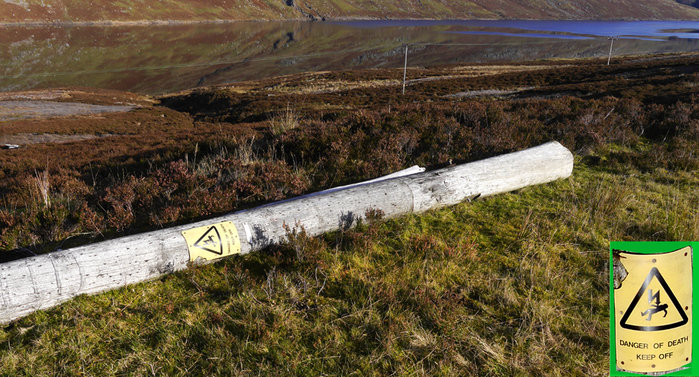 Danger of death it says, but I needed to sit down and decided to take the risk

Although it was only lunchtime most of the road was in the shade and it was quite cold - glad I'd bought some gloves - and the thought of returning this way in a few hours time and of retracing about 6km of tarmac didn't really appeal.: I should have been a couple of hours earlier

so I changed plan and decided to walk round the loch to the dam.
The map shows no track on the North/East side, but I can hardly have been the first person ever to traverse it, so there would surely be something to follow and at least I would be in the sun

There looked to be one streambed that might prove an obstacle, but I had crossed this slope twice doing Creag Uchdag so I had no worries. 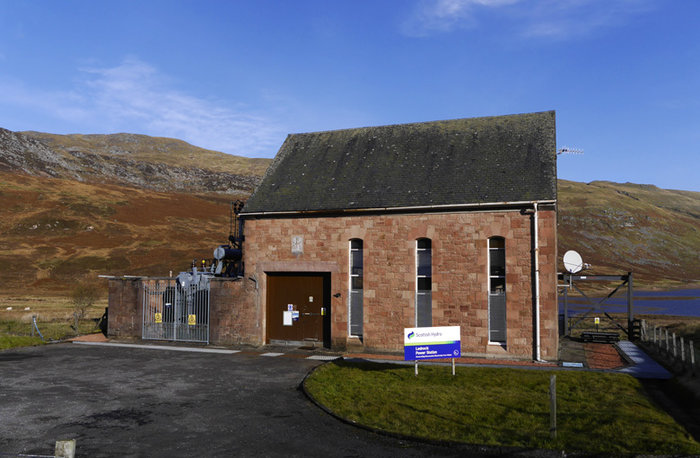 The beautifully built sandstone power station at the road end. (A couple of pipes descend to it). Now I understood why the road was tarmacked the whole way. Scottish Hydro don't skimp on these things - after all we are the ones paying for it 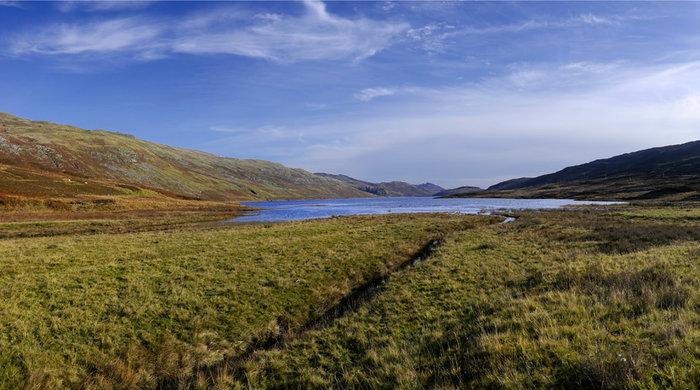 I headed round the back of the power station, and crossed the flat terrain and the Lednock burn without difficulty: Looking down the length of the loch - the earlier calm had gone 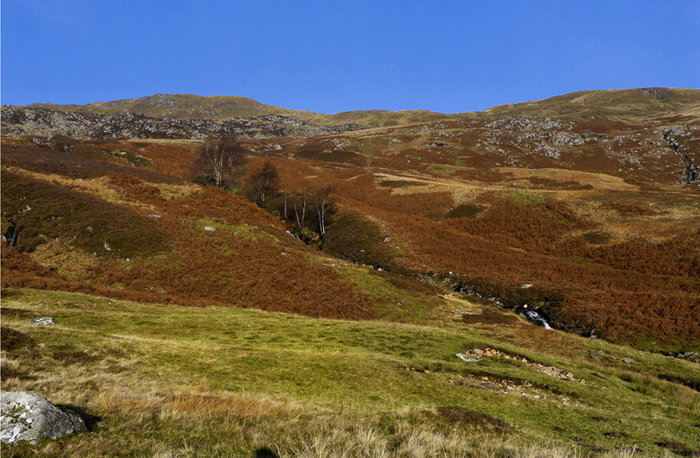 Another burn descend to the NE corner of the loch, but again it caused no problems and nor did the old stock fence beyond 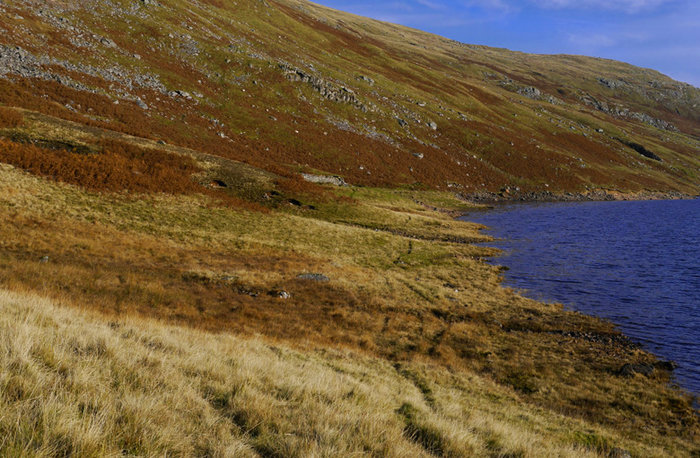 As expected there were signs of a track 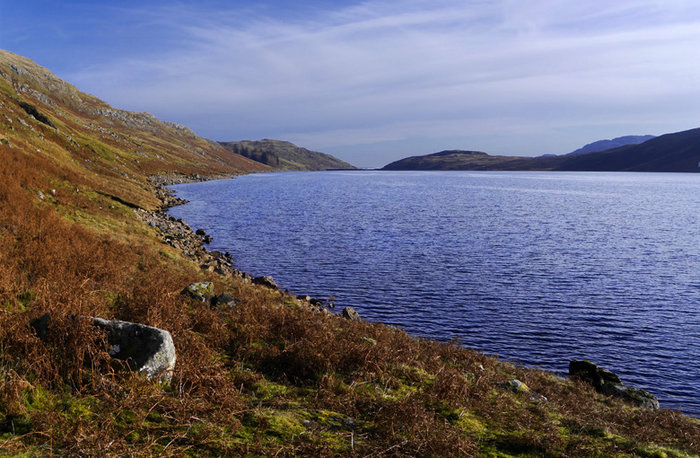 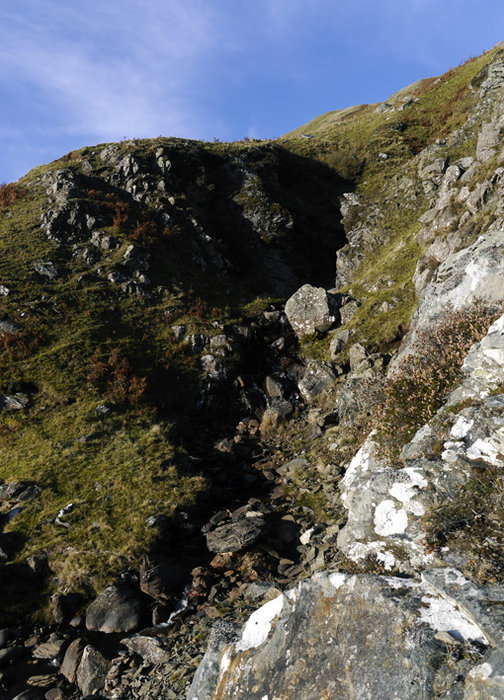 looking up the large gully which proved no obstacle
Beyond this gully, the bracken became a bit wearisome, though the small tracks continued through it. This walk would be much easier in the spring, but you wouldn't get the colour. I tried descending on to the foreshore but it was loose, unstable and slippery so I soon climbed back above 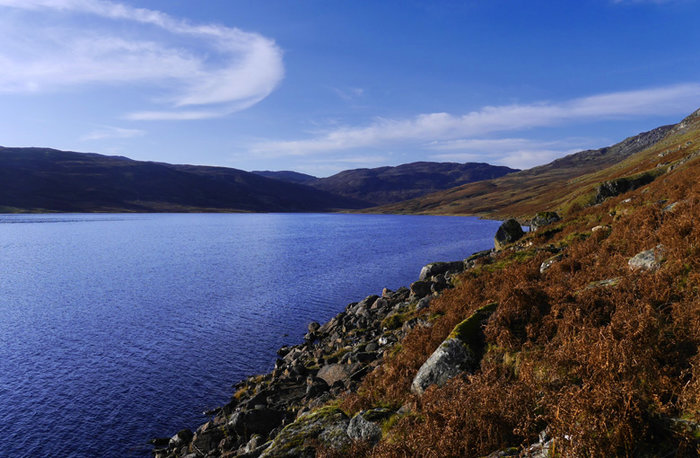 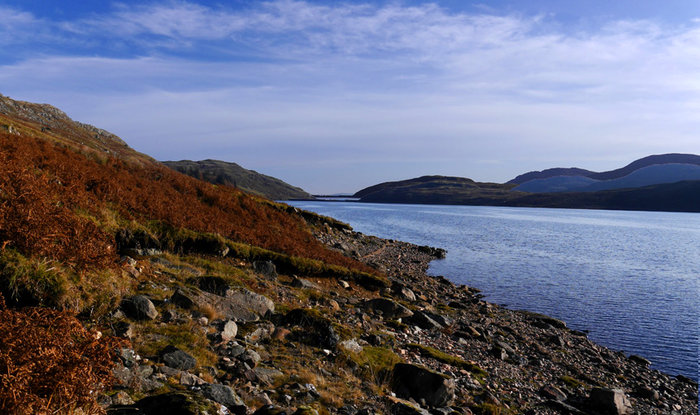 Views up and down - I was about 1.5km from the end now 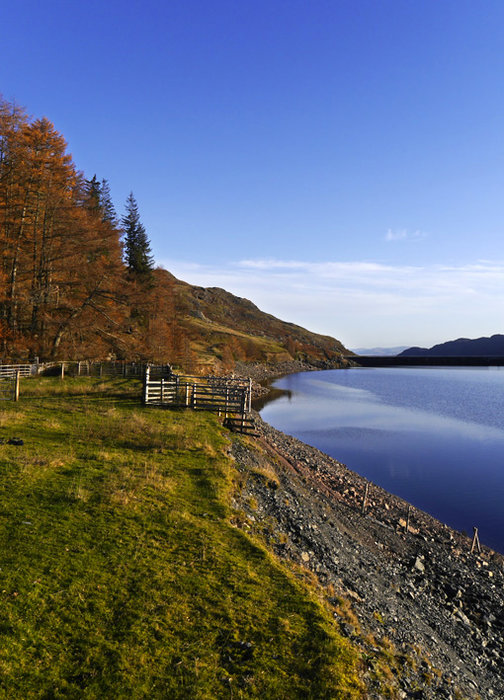 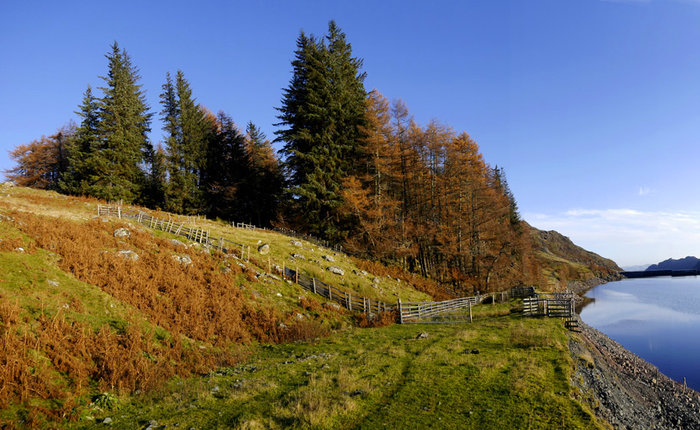 A wider view. The larch trees have grown well - a pity they don't continue up the lochside 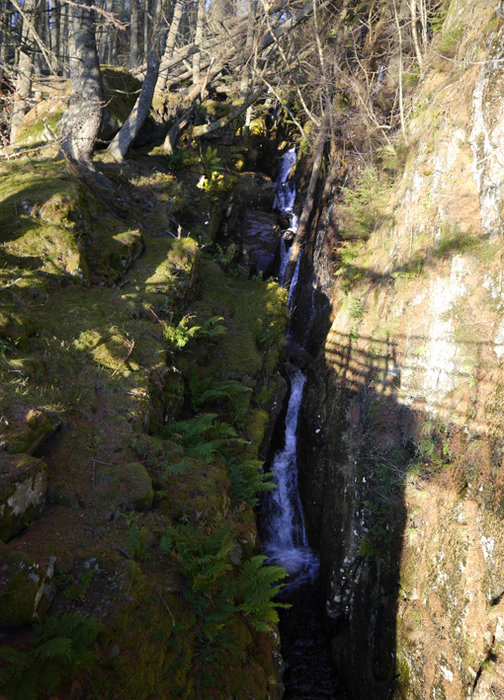 The track crosses a bridge over this exciting looking little chasm And continues to the dam: looking back from just above it
From the dam, I descended the road back to the car - a really enjoyable day


New_Route.gpx Open full screen  NB: Walkhighlands is not responsible for the accuracy of gpx files in users posts
Click to mark this as a great report. Register or Login free to be able to rate and comment on reports (as well as access 1:25000 mapping).

An avenue of Buddleia

The Wilds of Glen Beich