Having done the North and Southern sections of the (near) Pentlands, I was left with Hare Hill, Black Hill and Bell's Hill to do.
I started again from Silverburn, but level with the quarry I headed L on a track which joins the "Red Road" near the bottom of Eight Mile burn Looking W along the track towards Quarrel Burn reservoir

Junction with the Red Road The farm at Eastside nestles below West Kip At the high point the Red Road heads West of North Looking directly across to my first objective Hare Hill, there is an obvious track leading to the summit: I headed straight for it crossing the footpath that leads down past the waterfalls: this area at the head of the Logan burn is drained by a fan shaped series of ditches, and found the going quite dry Summit cairn with Black Hill behind There is an old quarry at the top I walked easily down grassy slopes with a final steep descent into Green Cleugh, crossed the Cleugh, climbed the track up the other side towards Harlaw - and branched off R just before the stile . The track climbed steeply for about 25m and then levelled off beside a fence heading roughly E . I came to an open gate and headed L up a narrow footpath through the heather which climbed gradually NE to join the big landrover track that climbs this hill. A very painless ascent A close up view of Black Hill from the slopes down Hare Hill: my route can be seen L of centre Looking back West through the gate Looking back down the heather path
I stopped briefly at the insignificant flat summit - not even worth taking a photo - and continued down the big track that led on towards Bell's Hill. After a hundred metres or so I took a couple of pics A wider view: Castlelaw and the N Pentlands behind: Glencorse reservoir on the R
The track descended into Den Cleugh (I seem to be there every weekend

) and I climbed the familiar track to Bell's Hill The grassy track up Bell's Hill Carnethy Hill, Scaldlaw and the Kips from the flat summit of Bell's Hill 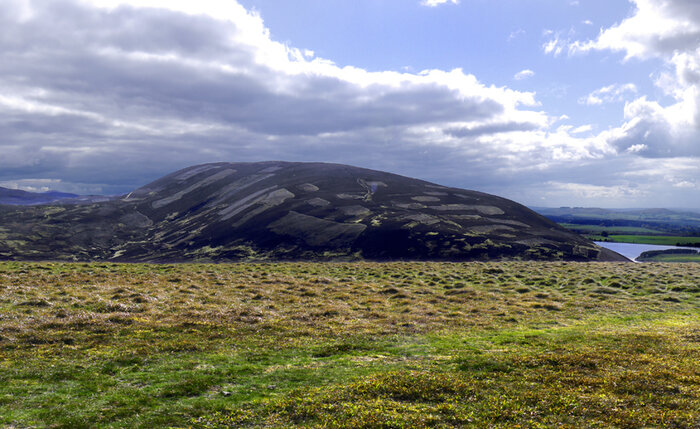 Looking back to Black Hill Castlelaw and the North Pentlands Harbour Hill: I found that there was a direct track to the head of Maiden Cleugh: I took the "bypass" track - it's fine in the dry - and followed the familiar route to the "corner of Bonaly woods Approaching Bonaly woods: It's an easy descent from here
Click to mark this as a great report. Register or Login free to be able to rate and comment on reports (as well as access 1:25000 mapping).


A tour of the South Pentlands

A Tour of the North Pentlands