Holding my breath on Beinn Dearg

I had so wanted to be back in Torridon! And Torridon also meant the Kinlochewe hotel, a safe haven after a desastrous crossing over from the Fannaichs in torrential rain in 1998, and a base camp for an otherworldly adventure in the Fisherfields and Fannaichs three years later; both forever etched in my memory.
So, the day arrived and looked just right and I set out for the long drive through the long golden autumn dawn along the Great Glen, and up into Wester Ross. Gone were the single track roads, but the hotel was still there, and even though or perhaps because modern times had arrived, it was a very enjoyable night. 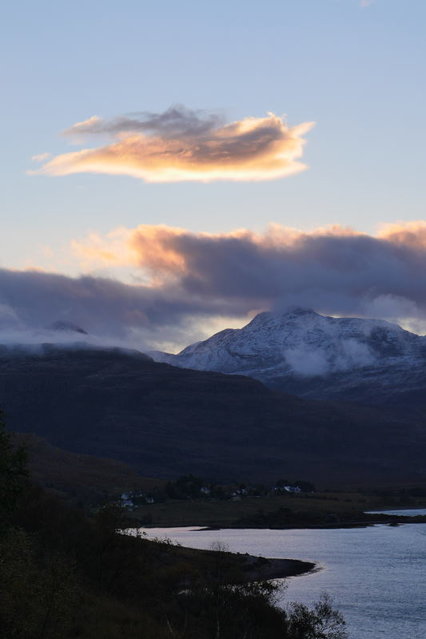 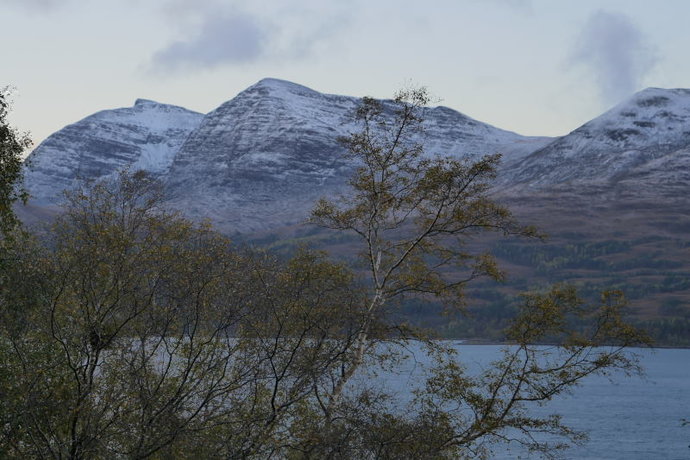 I slipped out of the house well before sunrise, went up Glen Torridon and along the sea loch to Coire MhicNòbaill, the great hills with a cap of clouds that was pulled here and there by the winds, the lower ones covered in snow that was slowly being painted purple by the rising sun. The car park lay quiet but not empty, soon I was off only greeted by another lonely wanderer, he to his coffee, me to the hill. 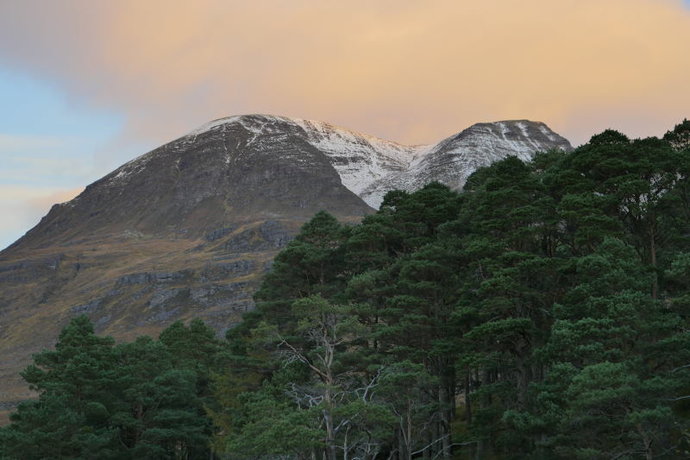 It was an autumn morning of great promise, to have the woods and waters and white-shrouded hills all to myself was almost too much of a blessing. Torridon is always a very reduced, abstract place, with its strata of old rock on top of old rock, like a symbolic sculpture of time itself. Add to this the fine white lines of the new snow and the hills become a ladder into another world, detached from time. Soon I passed under the black gash that an angry artist had left in Beinn Alligin. 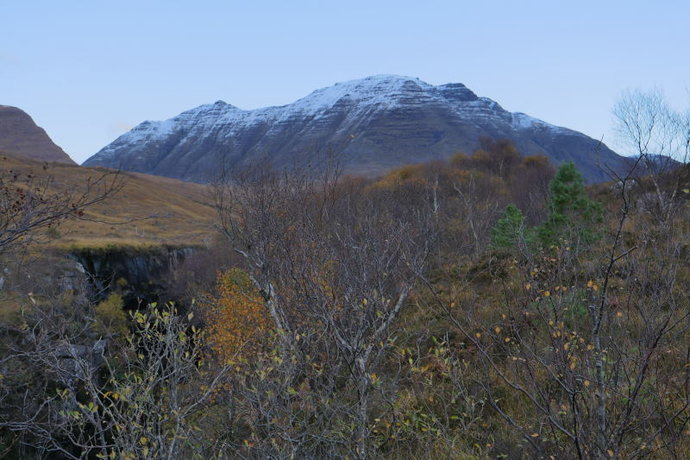 The first view of Beinn Dearg 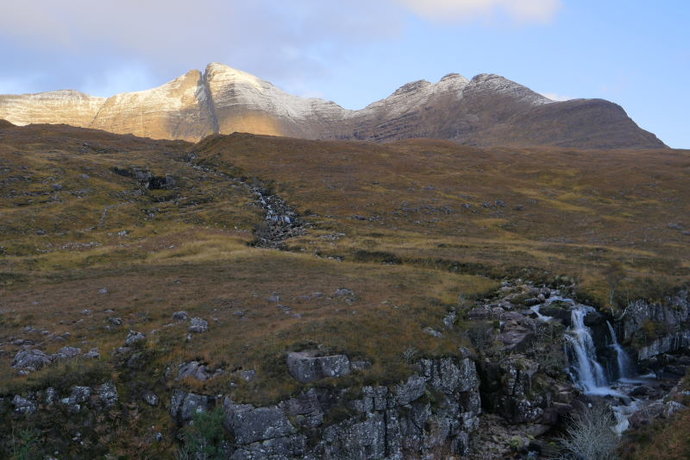 The destination lay ahead, lacking the gravity of Liathach and Beinn Eighe, Torridonian enough but still inviting. I had read enough accounts about Beinn Dearg, not the least Hamish Brown´s gruesome stories, to approach it with a great deal of respect. Yet the path along the Abhainn Coire Mhic Nòbuil was enjoyable, I passed under the great prow jutting out from its summit and plotted routes up its gullies. The gentle frost and delicate ice in the valley made for a fine contrast to the great muscular mass of Beinn Eighe ahead, that was beginning to shake off its clouds. 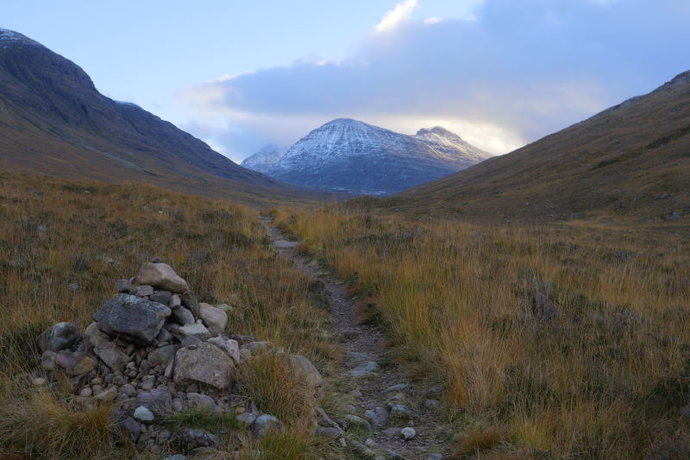 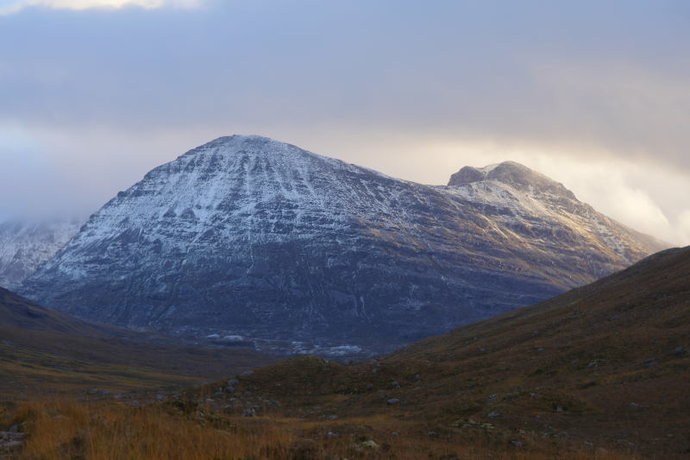 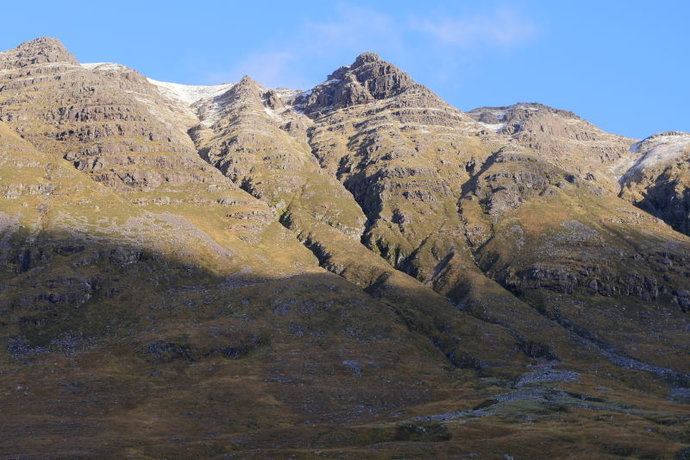 Beneath the prow of Beinn Dearg´s southern wall

I went until the path was close to the foot of the rise from Loch Grobaig to Carn na Feòla and headed up. Soon I reached the summit plateau and sooner I had reached the snow. The wind was biting and I enjoyed the sudden arrival in arctic conditions from the shelter of a sandstone slab. The views towards the famed Munro country were poor, but what a great display of space to the north and west. This is how I remembered it, a landscape so austere that any attempt to put a name on it would fail, any human word would be too much and too small at the same time. Yet man must name everything: Beinn an Eòin and Baosbheinn. 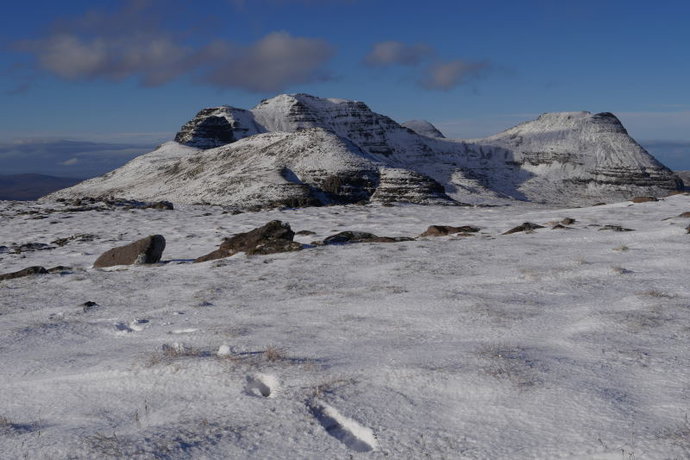 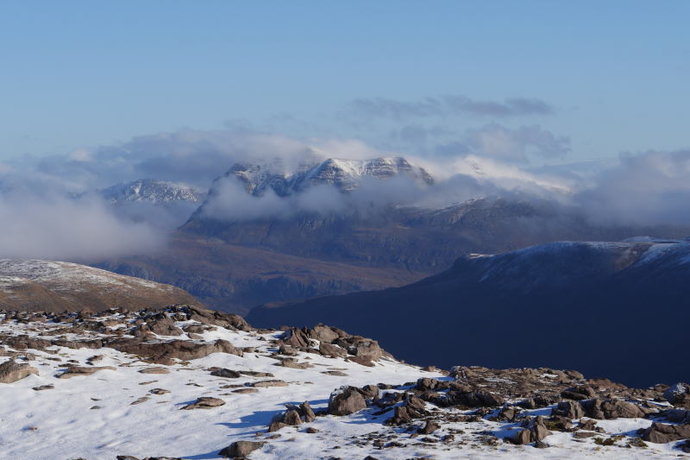 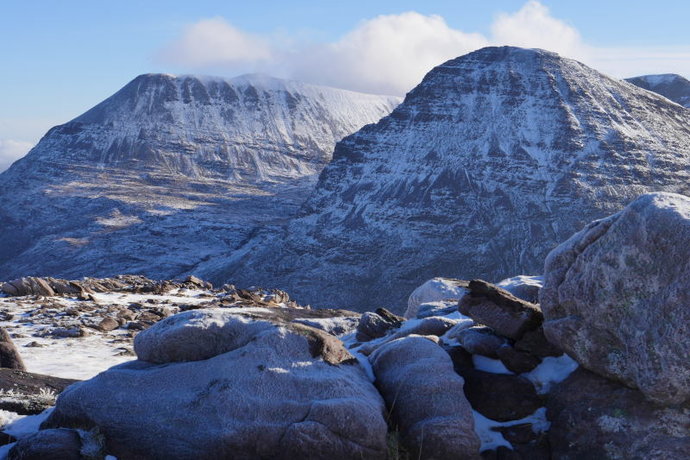 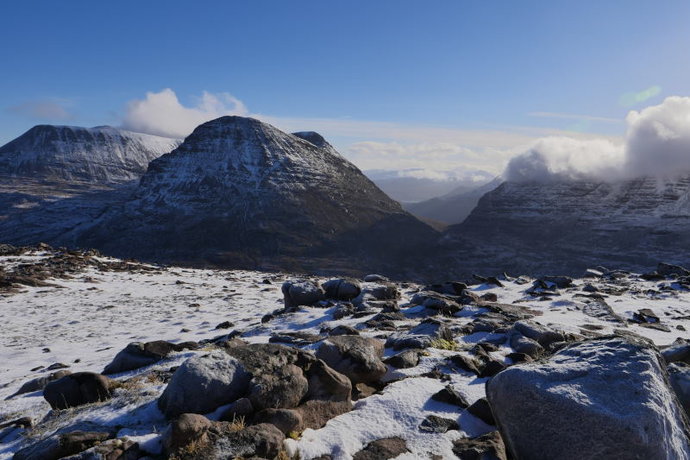 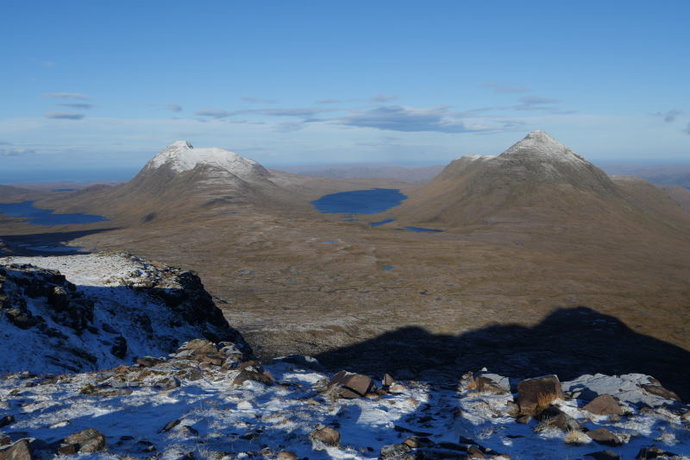 The continuation west on the broad back was a lively, playful walk through swirling snow, cast-away sandstone slabs, criss-crossed tracks of hare, fox, ptarmigan and stag. A short rise up to the Stob above Choire Mhòir, and there it was, the first view of the feared castle wall. The ridge narrows ominously on the approach. But it is merely a promise: this may be steep and narrow, but there is always a step and always a hold when you need it. The climb was a fluid one, despite the snow and ice, I felt like the mountain welcomed me on its terms. On top of the wall, the wind had died down and Liathach and Beinn Eighe had made it through the clouds. 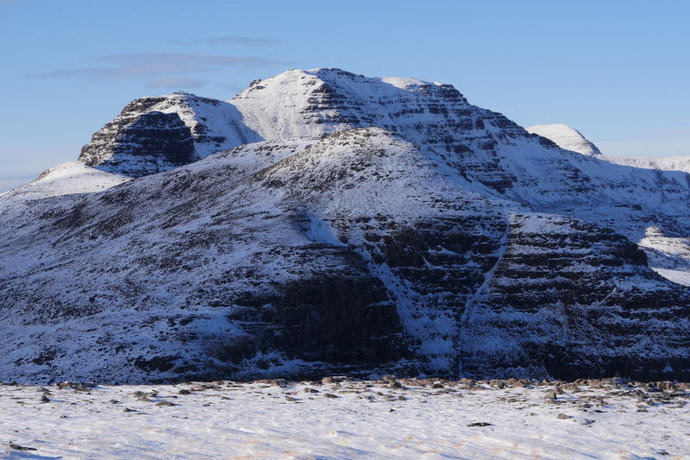 The remainder of the ridge, the castle and main summit. 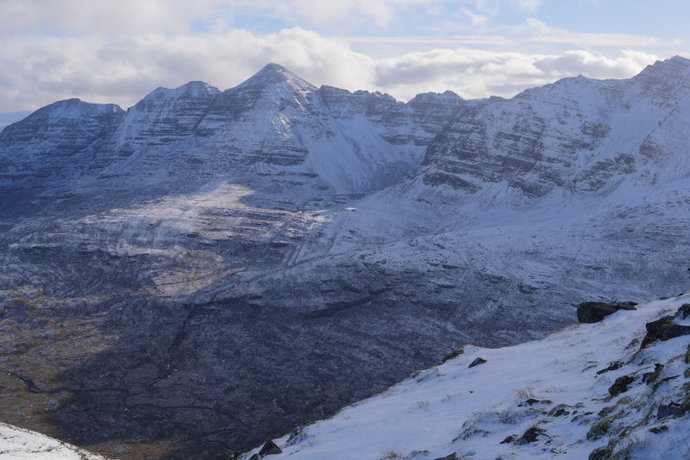 Liathach and Pinnacles from the top of the castle 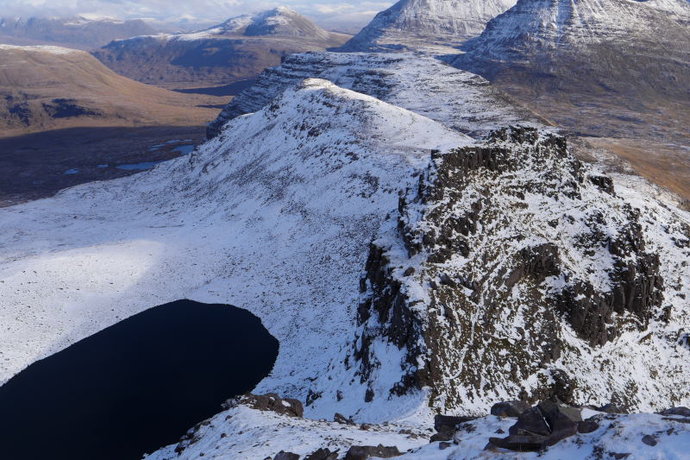 The castle from above

A little shoulder, on to the final pull - this might altogether be a very different hill in the clag, to give Hamish credit - and onto the large summit plateau. Where to look? At elegant Beinn Alligin whose contours were drawn by the morning sun? The vast expanse of the Shieldaig Forest (another name for something that cannot be named)? The Torridonian wasteland towards Loch Maree? The sleeping giant of Beinn Eighe? The sleeping dragon of Liathach? 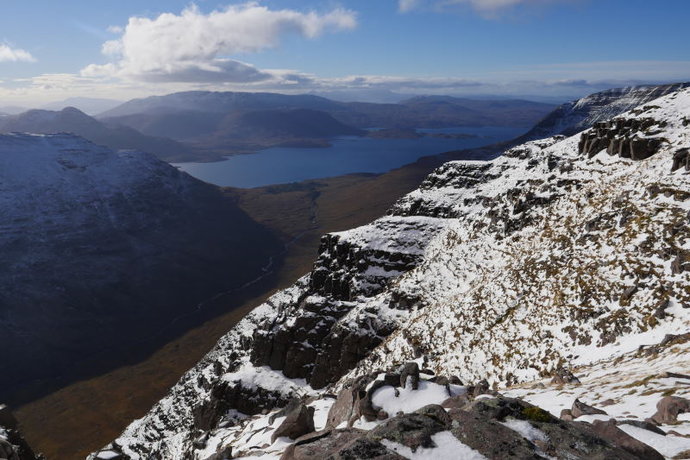 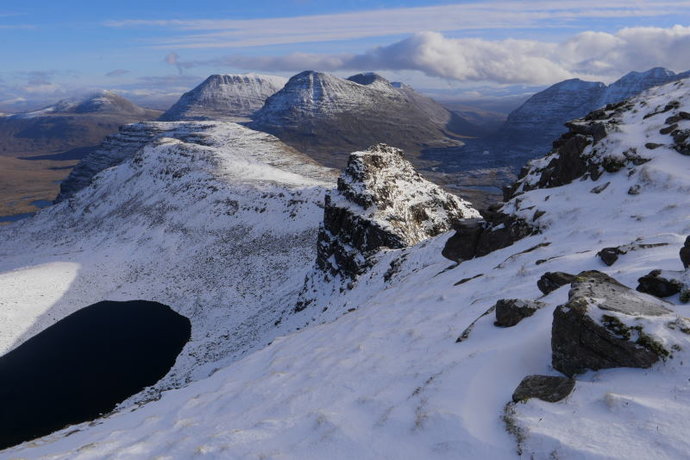 The way so far. 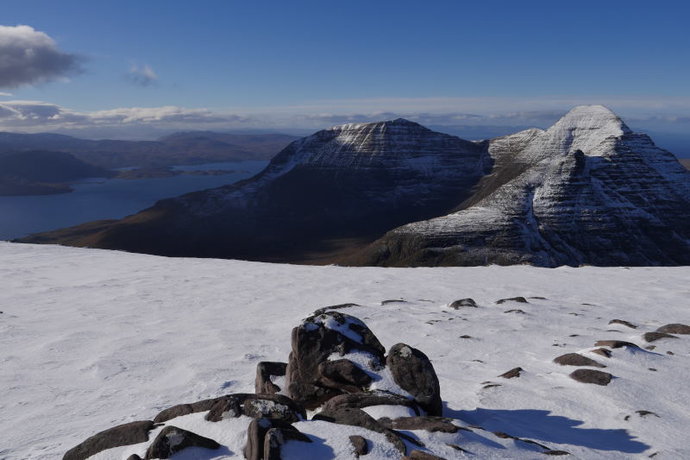 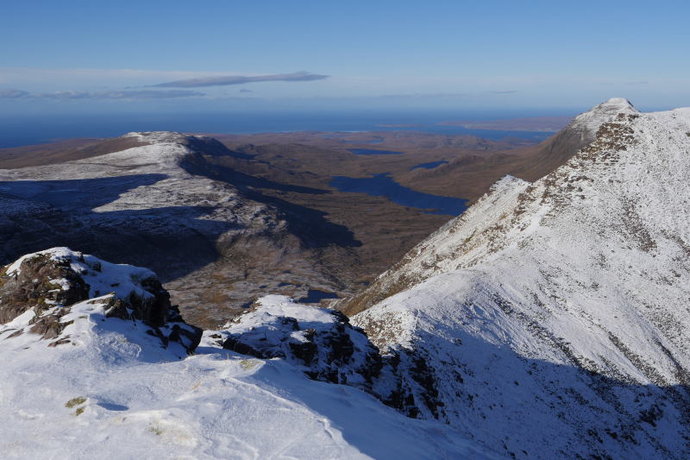 It was apprehension that edged me on. Perhaps a descent into Choire Mhòir to the north-east? It seemed an easy way down but a disrespectful one. Beinn Dearg had been an inviting, friendly mountain. Leaving it without doing it the honour of completing the ridge seemed ungrateful. I was still musing about the descent from the ridge, when the ridge itself, within a few steps, took me aside to whisper a memento mori in my ear. Rather than scramble down a rock on its crest, I had strayed into the north-east face of the headwall above Choire Mhòir. Beinn Dearg is an honest but stern encounter.
I was still a bit shaken after the drop to the bealach and the short but steep climb up to the final promontory over the open lands behind Torridon, Stuc Loch na Cabhaig. The beauty was still immense, but I felt I had tasted enough of it. It is a forbidden fruit, it lies in a realm beyond my reach, I could only exist there as long as I can hold my breath. On, down the northwest corner of Beinn Dearg, I followed the ridge which was pleasant despite some ice and the snow, until a natural line into the west face opened up that lead me all the way down to Bealach a Chomhla in one great zig-zag. 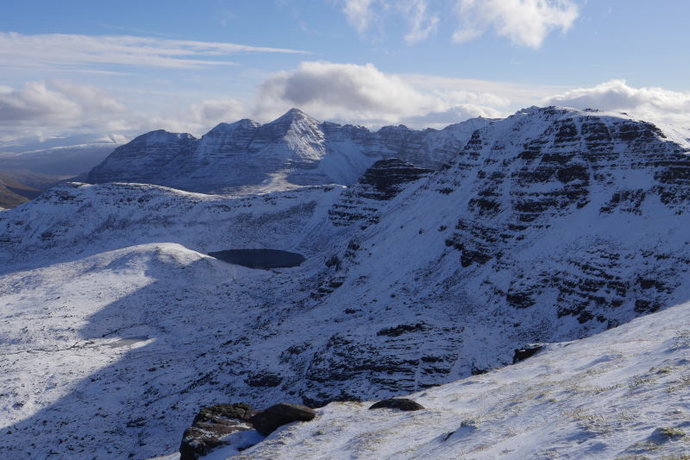 The northern corrie of Beinn Dearg, with Liathach behind, from Stuc Loch na Cabhaig

The mile or so across the bog was over in no time - my mind was still on the mountain. What a blessing it had been. For the duration of one breath-hold, no weight, no time. No life. On the good solid path to Beinn Alligin, I saw four figures, two made up for height with enormous colourful bobbles on their woolen hats. A family was coming back from their autumnal afternoon stroll. And reminded me of the importance of breathing. Behind me, Beinn Dearg stood above the passage of time. 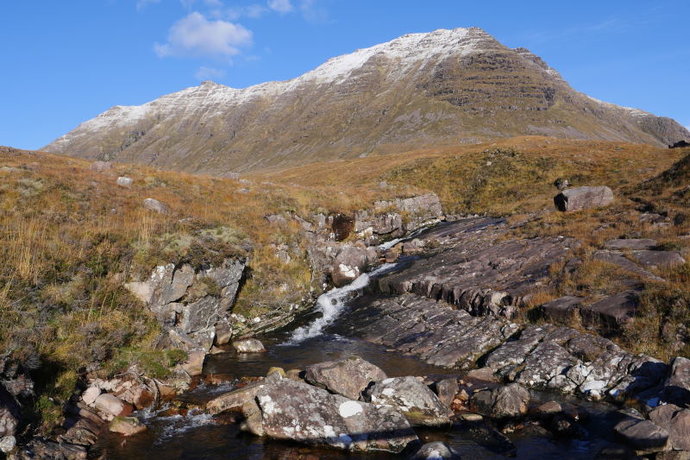