Route: The Hoe and Waterstein Head


our_route.gpx Open full screen  NB: Walkhighlands is not responsible for the accuracy of gpx files in users posts
This wander begins at the lonely, isolated farmstead of Ramasaig and follows the old cart track which goes south to Lorgill Bay. The track begins in a very muddy manner and the first obstacle is the ford across the
Abhainn an Lòin Bhàin which will be problematic after heavy rain, today it was ok. When the track begins to descend to Lorgill head right over boggy terrain to The Hoe and then to the cliff edge at Gob na Hoe where great views of the Duirinish coast are to be had. South Duirinish Coast taken from The Hoe. Idrigill Point and rocks known as Macleods Maidens can be seen centre right.

From this point follow the edge of the cliffs north and drop eventually to Ramasaig Bay.The wind was rather strong. Looking along Hoe Rape to Neist Point and its lighthouse The cliffs of Gob (means beak in Gaelic) na Hoe rise about 200 metes from the sea, taken from Hoe Rape Abhainn an Lòin Bhàin enters the bay with a fine cascade 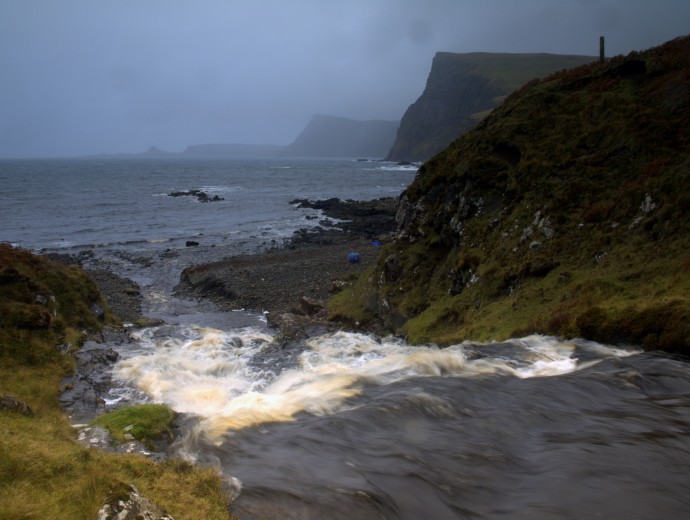 Abhainn an Lòin Bhàin cascades into the bay, the cliffs are (from the right) Ramasaig Cliff, Waterstein Head, and Neist Point, (the bump being An t'Aigeach).

and Ramasiag Waterfall can be seen further round the bay. Loch Eishort waterfall on the other side of Ramasaig cliff can also be seen.
Cross the Abhainn an Lòin Bhàin and then Ramasaig Burn before the steep ascent of Ramasaig Cliff the top of which gives excellent views across Moonen Bay to Neist Point and South to Gob na Hoe. Neist Point from the north bank of Ramasaig Burn before the ascent of Ramasaig Cliff, a stiff climb of 240 metres (just under 800 feet) 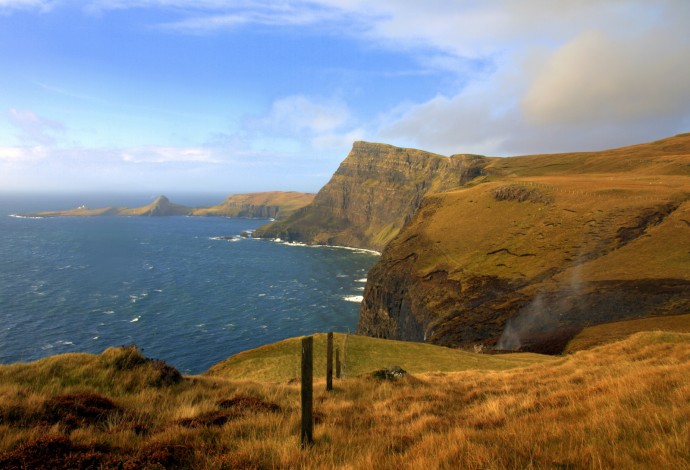 
From the descent of Ramasaig Cliff. What looks like smoke is the waters of Moonen Burn, the outflow of Loch Eishort, being blown back up the cliffs. onto Waterstein Head which is the high point of this walk. The views are tremendous though the top is spoiled somewhat due to old barbed wire fencing. Looking out to sea from Waterstein Head. The route from Gob an Hoe (right), Ramasaig bay and cliff from Waterstein Head.

From the top of the cliff head to Loch Eishort 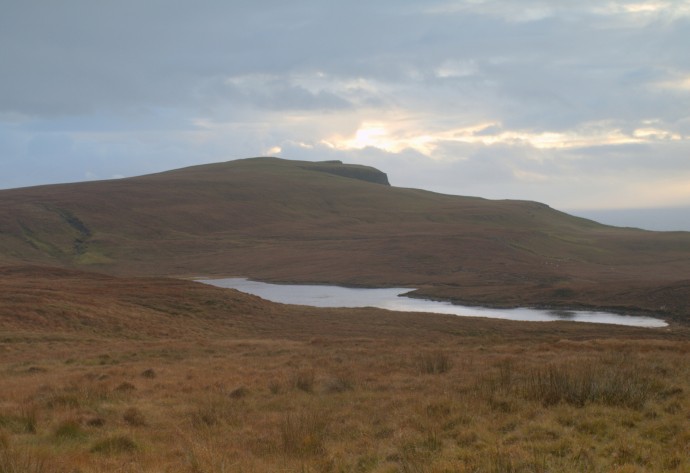 via beinn na Coinnich over rather boggy ground before arriving the road for the short walk back to the car.
Weather varied from sunshine to hale stones to torrential downpours but the constant was the strong wind.
A cracking route which I thoroughly recommend.
Click to mark this as a great report. Register or Login free to be able to rate and comment on reports (as well as access 1:25000 mapping).


Beinn Edra: A there and back

Above the clouds: High Cup Nick