The final day of this stretch of the Scottish National Trail from Fort Augustus to Morvich. I was dropped off at Cluanie - midges were biting as soon as I was out of car, so had to get moving.

The first mile from where I left out is along the road but the scenery accross the loch was good. Plenty of threatening cloud around, but no rain. Loch Cluanie from the road

Shortly after the An Caorann Mor river, the is a footpath sign (18 miles to Morvich). The path is a Landrover track for the first kilometre then boggy well used footpath after. It's a steady climb up the valley with good mountain scenery. After nearly 5 kilometres, the head of the valley is reached and the beautiful Glen Affric Valley comes into view. 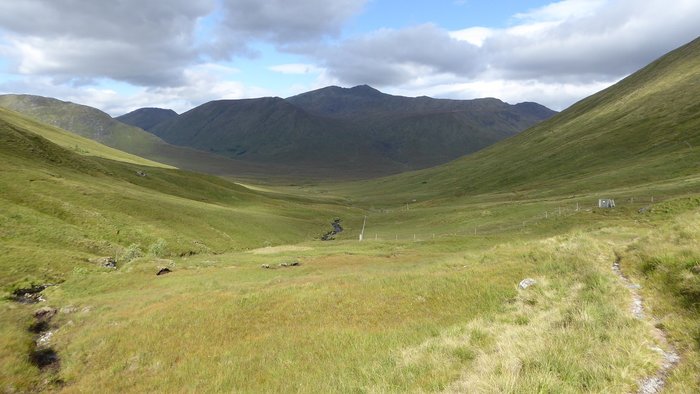 There are a few paths here and the temptation is to drop down into the valley too early, but there is a decent path on the slope and and follow it round to the right. As Glen Affric opens up, the Camban Bothy appears, though that is some 5km away along the path. As the path goes further round the mountain slope, Alltbeithe Youth Hostel comes into view as well as an attractive footbridge. This hostel is one of the remotest in Scotland. It was all closed up due to the Covid-19 crisis. At the hostel, the path now becomes part of the Kintail Way and follows a good vehicle track all the way to the bothy. Easy going along this stretch with the odd stream to ford. Take a look inside the bothy:


Shortly after the bothy, the head of Glen Affric is reached and the descent down to Morvich begins. Scenery continues to be spectacular in a different sense as the path descends through the Kintail Gorge so lots of rushing water and some good waterfalls - some more distant and definitely worth a diversion if you have time. Perhaps the best waterfall in the gorge is at the Allt Grannda - for some idea of its size, compare size of trees to left. Also included a video of the waterfall here:


Shortly after the waterfall, the valley straightens with a nive view down to the basin. Waterfall coming down from Allt an Lapain Not much left of the old footbridge where the path originally went, but a new footbridge has been built further down. Shortly after the footbridge, there is private bothy (Glenlicht House, all locked up but looks an interesting place to stay. See https://www.facebook.com/glenlichthouse/).

From here there is a fairly easy going vehicle track for about 5 kilometres to Morvich. Still good views with some waterfalls coming down the mountainside. So that's the end of another stretch of the Scottish National Trail - hoping to get to Ullapool or thereabouts next year. Yet again, the scenery continues to get better the further north we go. Scotland continues to fascinate me.
Click to mark this as a great report. Register or Login free to be able to rate and comment on reports (as well as access 1:25000 mapping).