Having had views of Snowdon on each of our previous walks over the bank holiday weekend for our fourth and final day we'd planned the North Ridge of Crib Goch from the Llanberis Pass. To our pleasant surprise we woke to another beautiful morning and after a full Welsh breakfast at the B&B it was time to get the walking boots on. We parked in a large layby at 621 571 which then requires a short 150m walk up the road (away from Llanberis) to the start of the walk proper and a vehicle bridge over the stream running down the valley.

This starting point is significantly lower than Pen y Pass and the path up to Cwm Glas Mawr is quite a slog. From Cwm Glas Mawr the route heads over to the left, below impressive cliffs on your right, towards a steep and rough path up to the grassy bowl containing Llyn Glas. Bridge which marks the start of the route, path in the background leads up to Cwm Glas Mawr View up from Cwm Glas Mawr, path heads up the rough ground on the right, below the crags Once at the top of the rough path up from Cwm Glas Mawr we headed directly over open ground towards Llyn Glas and the scree slope which marks the beginning of the North Ridge. It's easy walking over grassy terrain and the views of the route ahead and Crib Goch are excellent. Other than a few people being visible up on the main ridge the whole place felt utterly deserted and very peaceful. 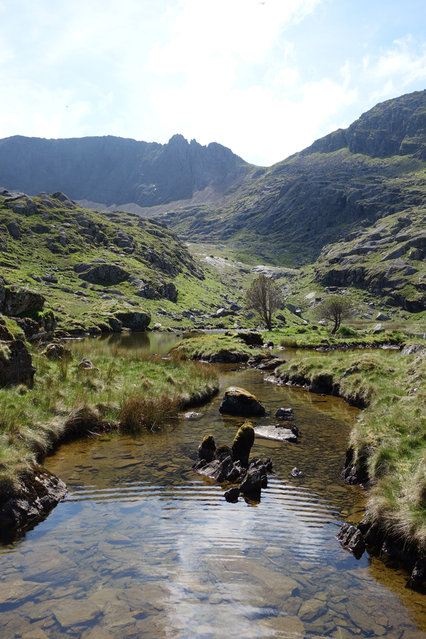 Llyn Glas - we could see grey fluffy gull chicks plodding around on the island! Short scree slope to start - much steeper than it looks...

Unsurprisingly the short scree slope was unpleasant! We initially headed for a faint path heading up to the right (which was a mistake) before heading back over to the more heavily eroded path on the left which gave much better purchase. Thankfully it’s only a short sharp scree scramble to the beginning of the ridge proper. View up the lower section of the North Ridge

View up the North Ridge and across Crib Goch

We kept to the ridge as much as possible - 'crest is best' afterall! As you ascend, the slope to the right quickly steepens and that on the left is very much a cliff! The scrambling is straight forward though there was a stiff breeze and the shattered rock of the crest, whilst not unpleasant, is more loose than the main ridge and is enough to keep you focused. Final section up to the East Summit of Crib Goch Hollie on the final section to the East Summit - its nice and "airy" near the top!

The top section of the North Ridge was, for me, by far the best bit of the walk. Once on the East summit of Crib Goch it was time for a quick chocolate stop before the main ridge. I absolutely love this summit - stunning views in every direction.

Suitably refreshed it was time to get ourselves across the main ridge. We ended up behind a large group who were moving slower than we would have been doing ideally but on such a beautiful day we just kept well back and took the opportunity to take in the views. 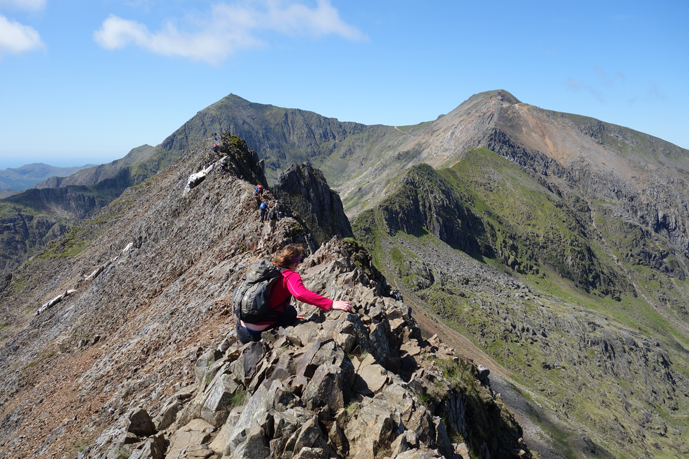 Looking back at Crib Goch

Once over Crib Goch the next stop was Garnedd Ugain / Crib y Dydsgl. There's some really good scrambling to be found on the section after Bwlch Coch which often seems to get overlooked. Looking back towards Crib Goch

Once on the summit of Garnedd Ugain we found a quiet spot looking down the Llyn Peninsula for lunch and watched a steady stream of people heading up the Llanberis path below.

We'd intended to do the Snowdon summit but after four days walking the legs were tiring and having had a great morning we decided to quit whilst ahead and call it a day. Our route down was to be the Cwm Glas Spur which is the ridge that borders Cwm Glas Mawr. From the summit of Garnedd Ugain we headed north down the grassy slopes with the cliffs of Cwm Glas close to our right and the Llanberis path and mountain railway far over to the left. As we walked down the pathless and ever narrowing grassy spur it felt very much like we were about the step off the edge of the world - the path ahead wasn't visible and we consulted the map a couple of times before being suitably reassured. Eventually our (careful) persistence was rewarded with a view down the ridge ahead - it's a straightforward path with some simple scrambling at the top and great views over the the Glyders and down the valley to Llanberis. Looking down the Cwm Glas Spur Hollie on one of the srambling sections on the way down

We'd been half tempted by a grassy slope down to the right of the spur - this is NOT the way down and ends in cliffs above Cwm Glas Mawr. On a beautiful day so close to Snowdon we only met one lone walker all the way down who assured us we were on the quietest path on Snowdon! Eventually the ridge peters out and we crossed the grassy slope down to our ascent path in Cwm Glas Mawr. Looking up the lower section of our descent ridge

The North Ridge is a great scramble up to Crib Goch however from our starting point it seemed to feel like quite a long approach - that said we really enjoyed seeing Crib Goch from Llyn Glas and if you enjoy solitude I think you're unlikely to be disturbed on the way in...or the way down!
Click to mark this as a great report. Register or Login free to be able to rate and comment on reports (as well as access 1:25000 mapping).