This walk had been on my mind since a failed attempt last year when me and my mate came up and bombed miserably. My mate does everything at 100mph without exception, if it can't be done quickly, it's not worth doing,probably something to do with the fact he has 4 kids under the age of 10

. He decided we should carry on up the main path and head up from the bealach (i wasn't going to argue,i kinda knew by that point the slightest thing going wrong would bring about a retreat back to the car).when we reached the bealach,a short burst of rain brought about the "thats it! i've had enough!!" I'd been waiting for and that was that

So this time i set off at a far more leisurely pace at around 10:30 determined to see a bit more of these mountains. I left the carpark and headed along the road and across victoria bridge and turned left shortly after, the track follows the river for a good bit before turning off just after the green hut. 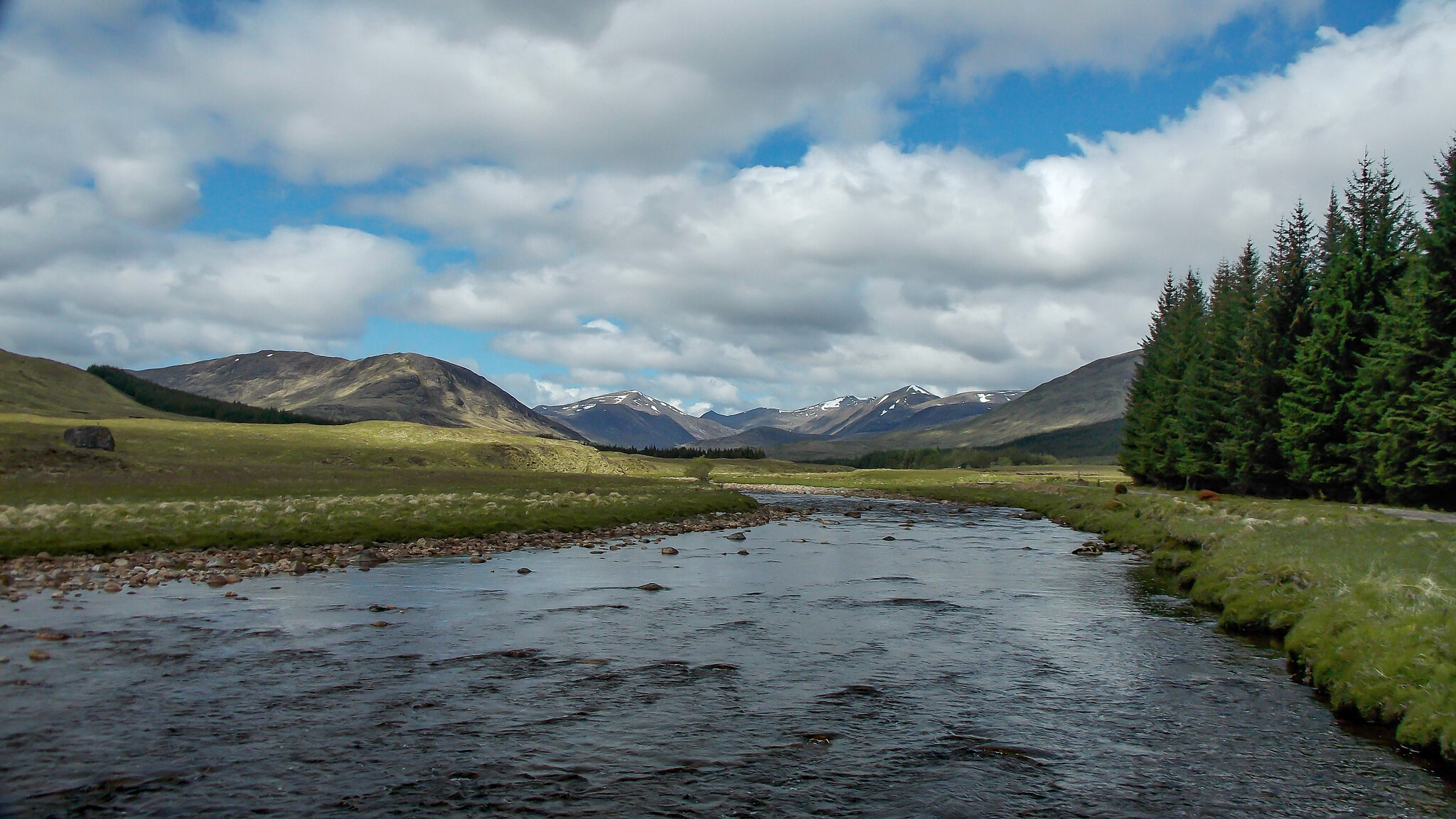 The path from the hut was pretty wet and boggy in places, but posed no problem. It's only when you take the stalkers path up stob a'choire odhair that it starts to get steep, the zig zag path takes a bit of the sting out of it though.
This is where the views start to open out.


looking up towards the aonach eagach

It was a straight forward walk up to the summit, steep to start,a bit of huffing and puffing, but the gradient eases after a while and all the while stob ghabhar starts to look very impressive 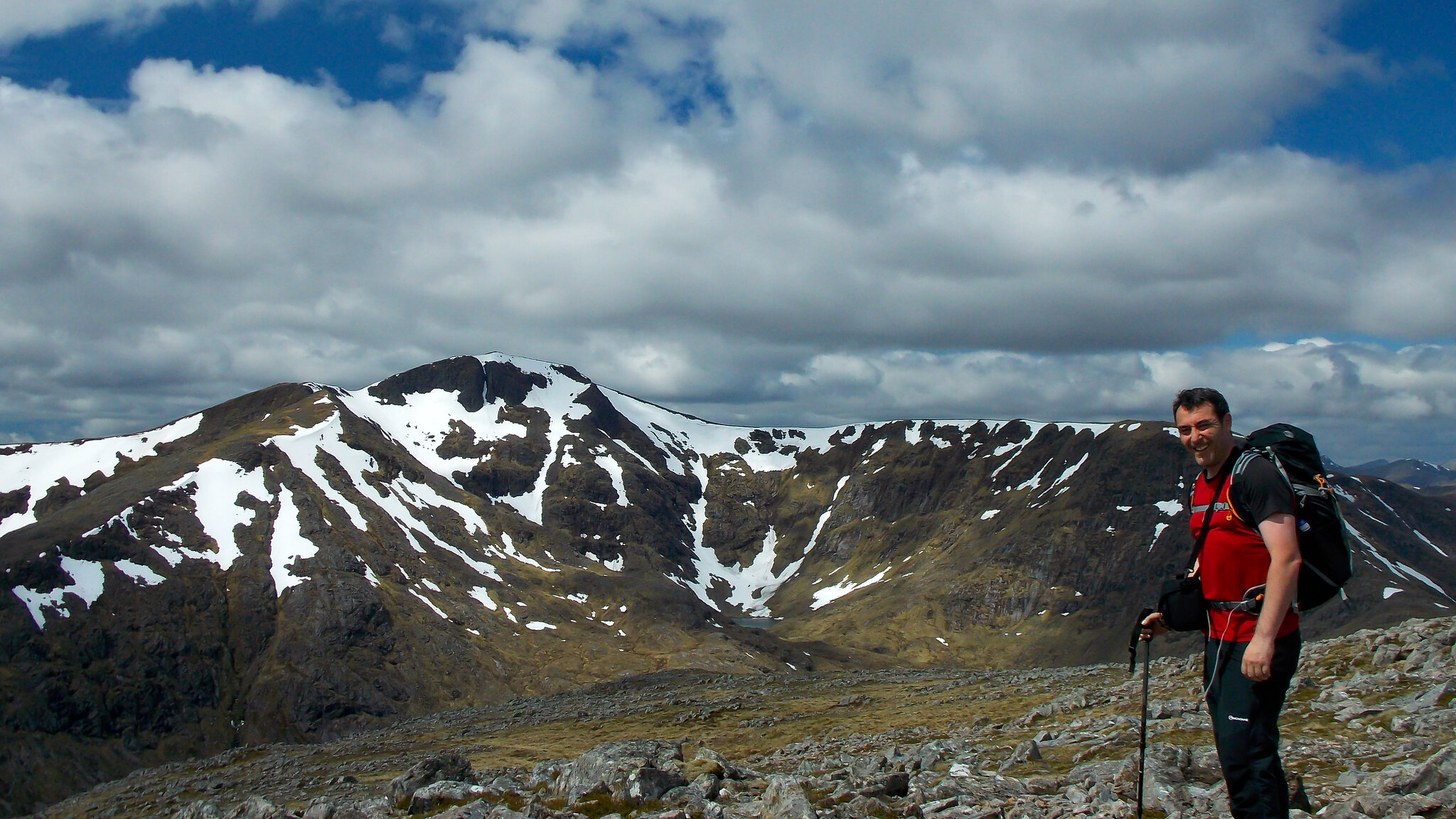 On reaching the top there was a group of three having a break and admiring the views,a lady who was leading a couple of german guys,she said that she'd never seen the path up so wet and boggy.
They went on their way after 10 minutes,she was explaining the finery of "haggis neeps and tatties" as they left

This left me the summit to myself,the views all around were superb.

After refuelling and taking in the views i set off down the hill towards stob ghabhar, it didn't take long to catch and pass the group from the summit,they were heading back down.
it didn't take that long to reach the base of the couloir butress which looked pretty steep,in fact coirein lochains walls are all impressively high and steep.

The path was pretty clear for most of the way,some sections of scree and some optional scrambling to spice it up a bit,but it wasn't quite as hard as i thought it was going to be.

On reaching the ridge the views opened out again,but my eyes were drawn to the ridge ahead,crossing it reminded me a bit of the cmd arete, (a very small bit) easy enough and alot of fun .


looking back to the ridge

the orchy hills and loch tulla

It was just a short pull up to the summit from here and again the views were stunning, the cloud was a bit thicker than it had been but there was still bits of bright sunshine lighting up parts of what were otherwise dark brooding mountains.visibility was excellent. 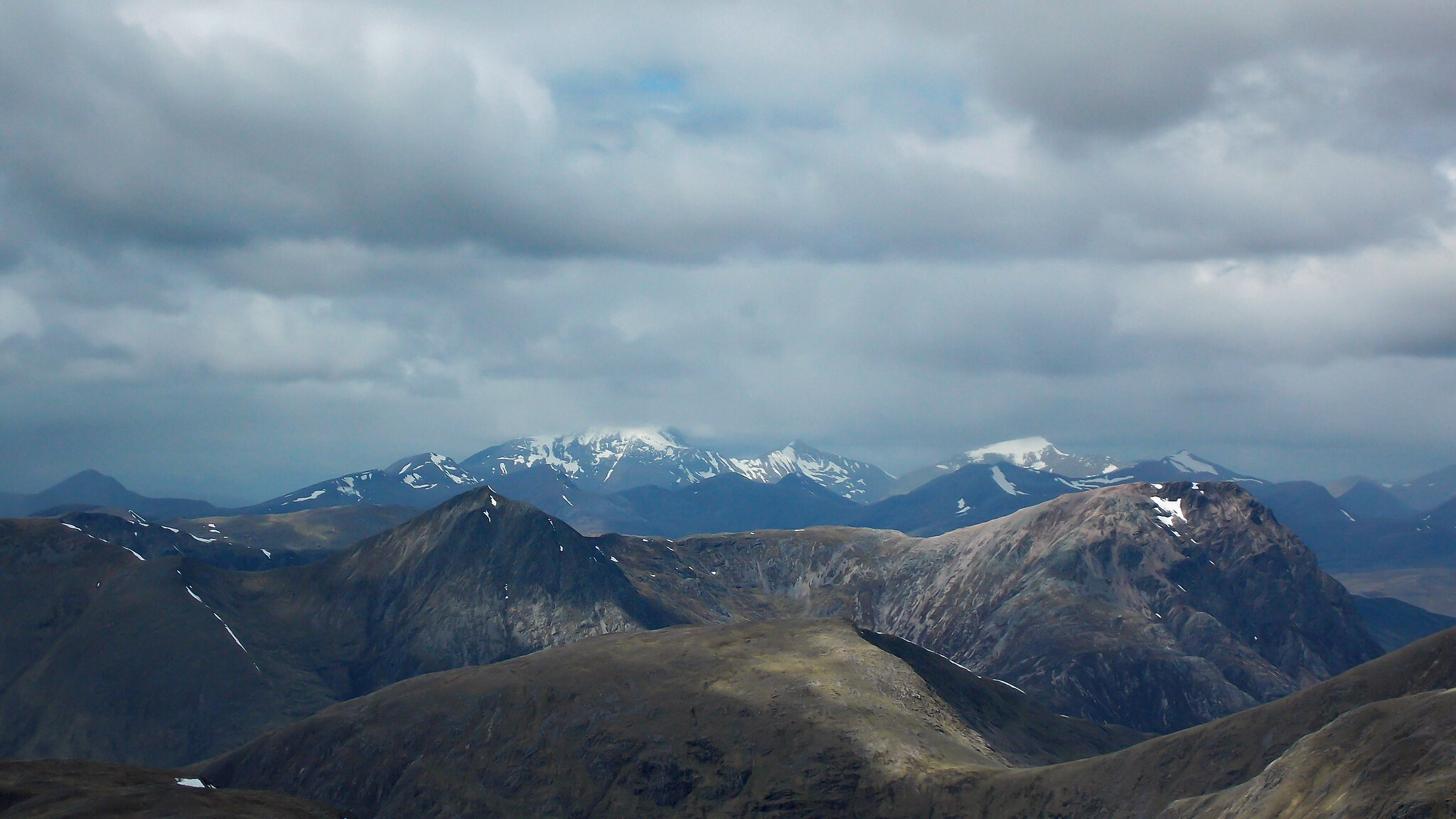 After quite a while on the summit i reluctantly headed back the way i came for a bit then followed the line of fence posts down,it was quite easy going til the waterfall where it steepened up quite a bit, there was a few tricky bits but nothing major. It really is an impressive series of waterfalls. 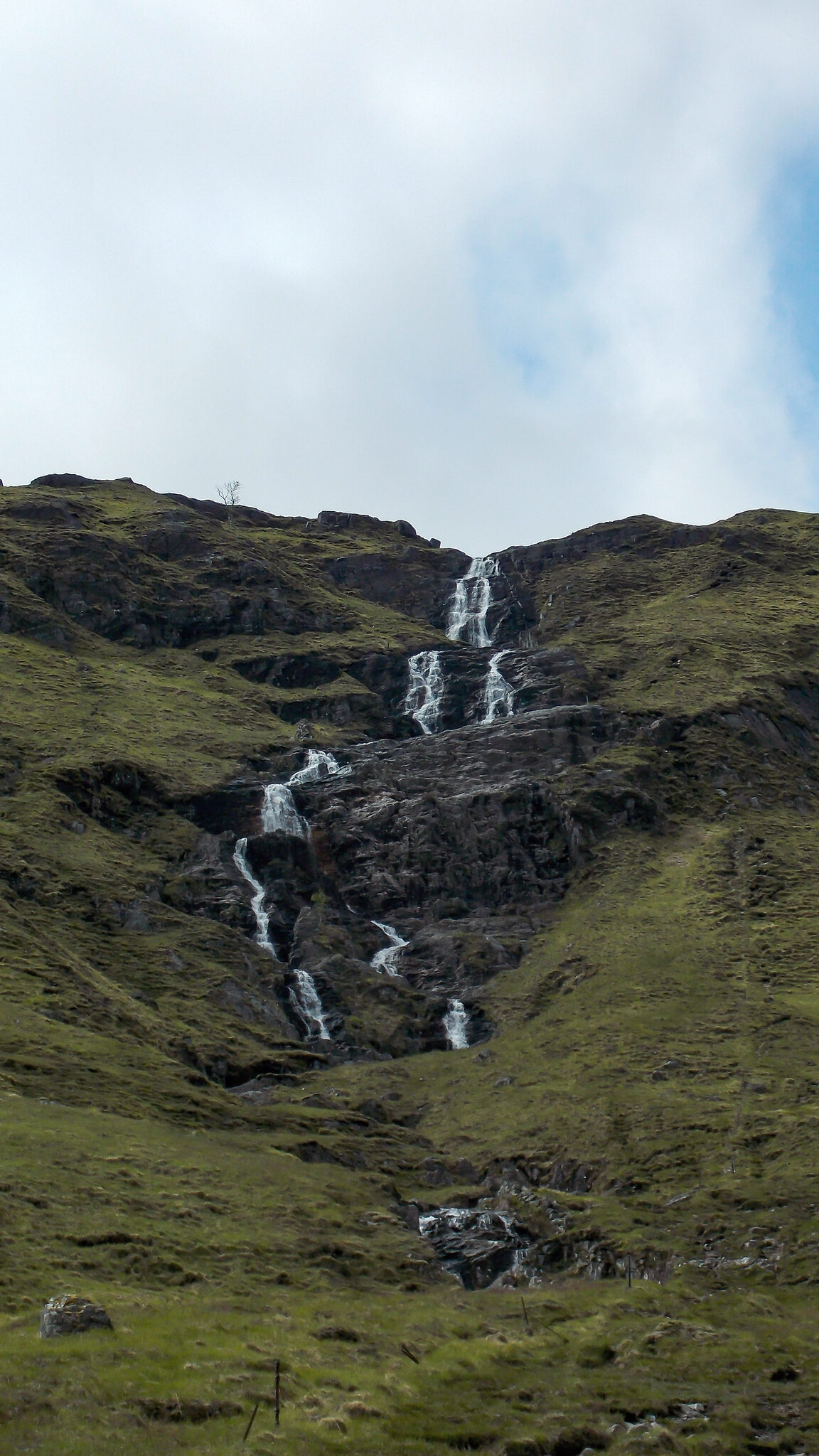 Reaching the bottom of the falls meant the last of any difficulties and it was the longish walk back to the carpark.
When i reached the track beside the river there was a dear eating the grass,getting the camera out it duly posed for a couple of shots 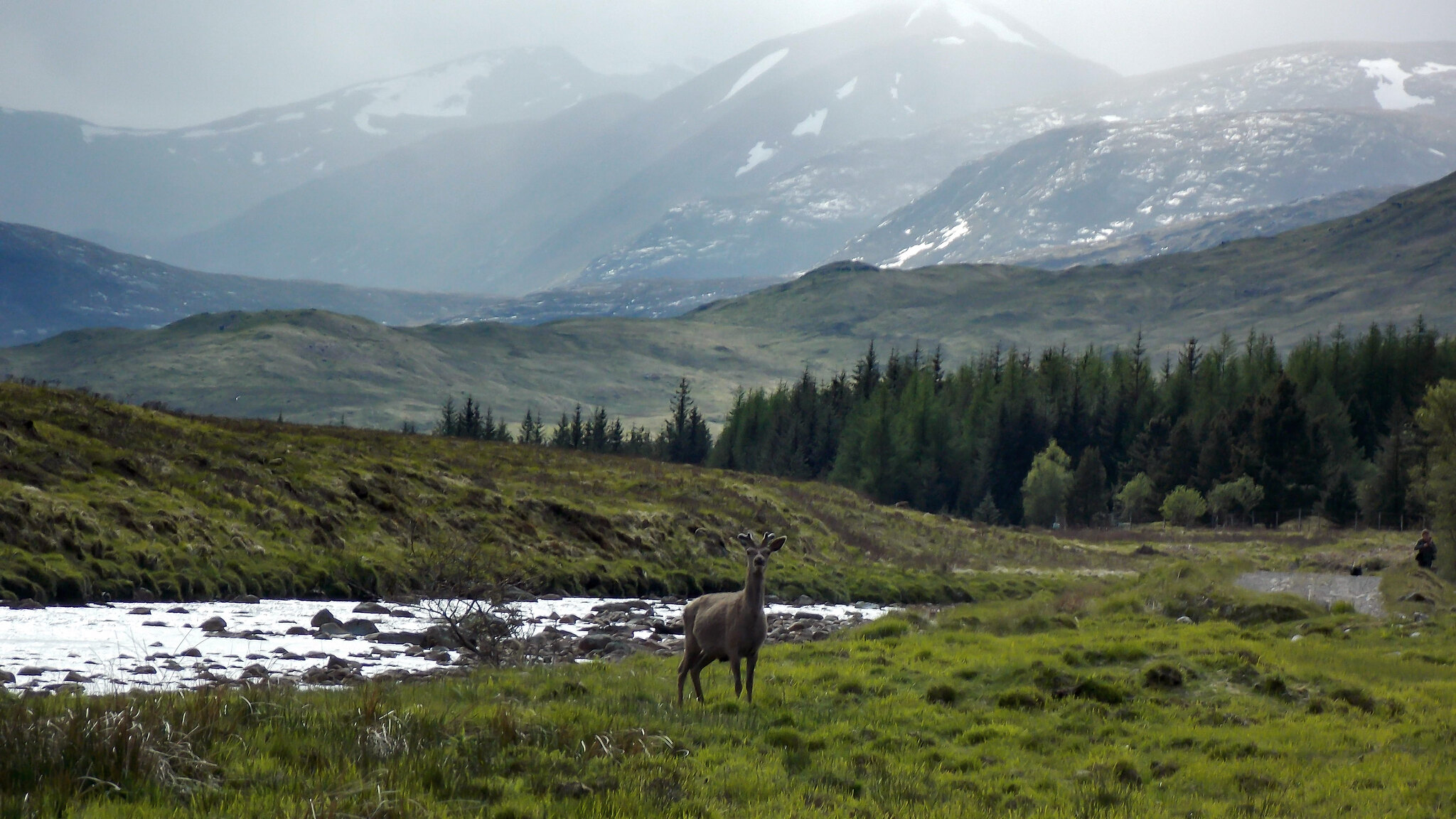 stopped at the bridge for one last photo 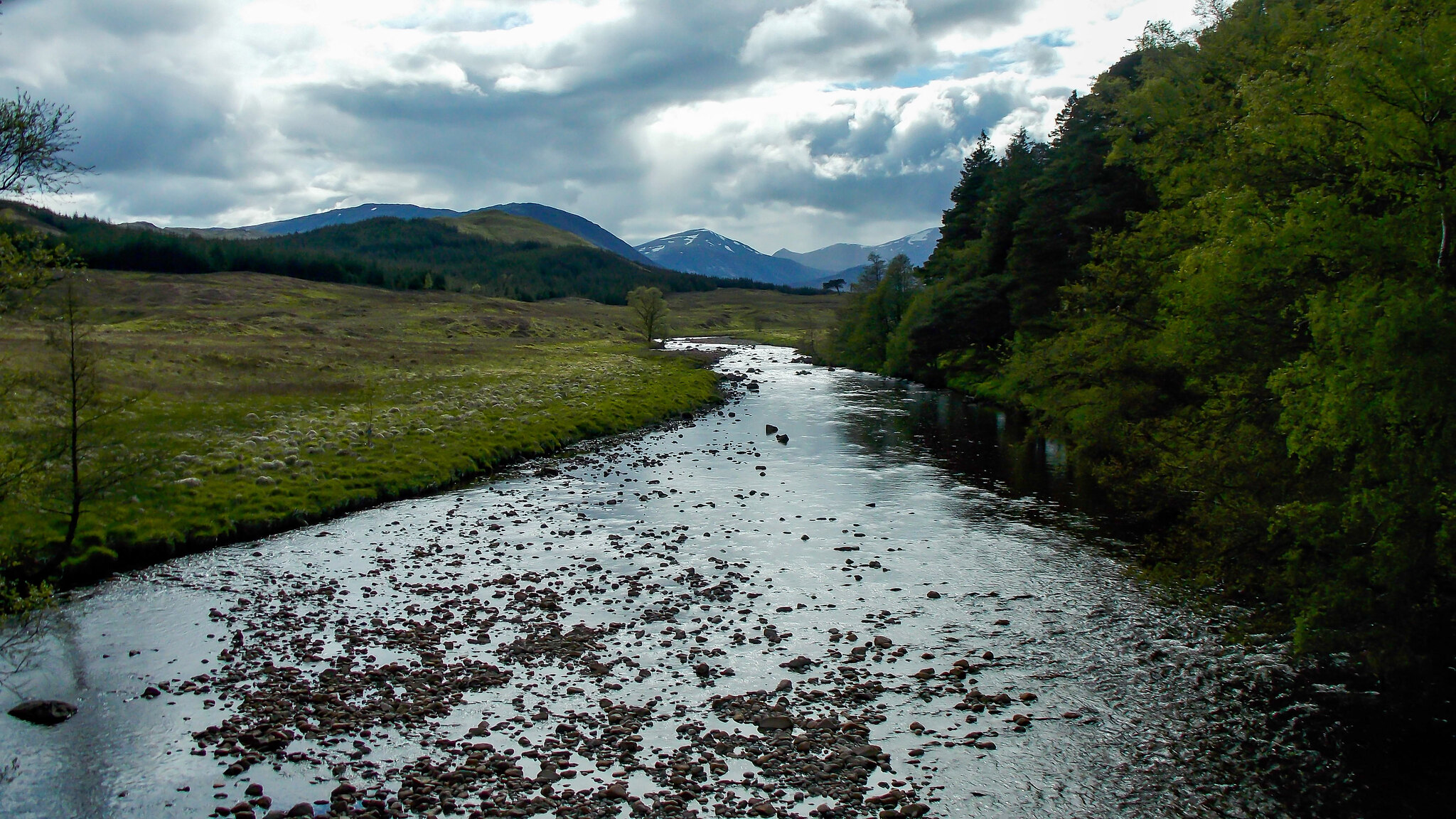 This was a great walk,stob ghabhar especially was alot of fun,and the views were stunning.