My first post! This site was so helpful in getting routes organised on my first week of munro-bagging, I wanted to write a couple of reports...

I had originally hoped to do all seven munros in the Ben Lawers range doing this route:


Ben_Lawers.gpx Open full screen  NB: Walkhighlands is not responsible for the accuracy of gpx files in users posts

However, here's the route I finally ended up taking...


Ben_Lawers (1).gpx Open full screen  NB: Walkhighlands is not responsible for the accuracy of gpx files in users posts

As I was hoping to bag the whole range on my own, I thought the best option would be to walk from the Glen Lyon side, and do the horse shoe of munros, tagging on Meall Greigh and basically double bagging Meall Garbh on the way across. I'd intended to do the clockwise route, as suggested by helpful munro-ing folk I met in various places.

Unfortunately, I bumped into the farmer who works on that side of the valley at the homestead (beginning of the valley lane) at 7.45am, and he requested I go anti-clockwise as he would be working on that side (glad I was wearing my brightly coloured 'I'm-not-a-deer-headband')... 'anyway, it's easier that way,' he said... to my gaffaws, 11 hours later. Or I would have gaffawed, if I'd had the energy to open my mouth... 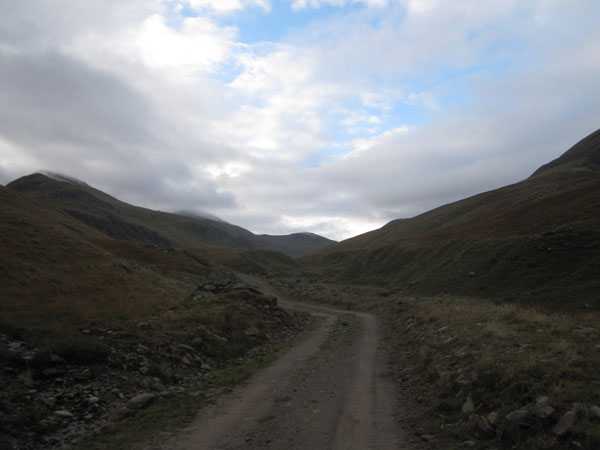 The lane on the way to the boggy slog

It took 2 and a half hours to slog through the boggy, murky grimness of what I like to call 'lower Scottish mountainside, in Autumn' made slightly more bearable by the vole, deer and of course sheep sightings, which my trusty sidekick, Peggy tried to eat for the rest of the day. 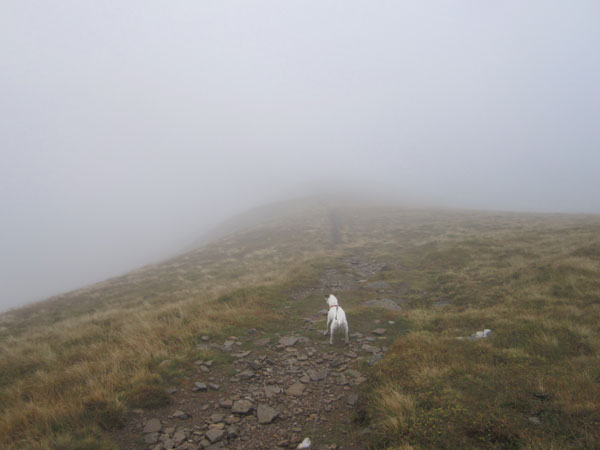 I emerged through some fairly dimming cloudy fog to discover a plateau, on which I eventually located a cairn, and ceremoniously bagged Meall a' Chorie Leith with the standard selfie that is the way of the lone wolf (or anyone with a sidekick that doesn't have opposable thumbs)... 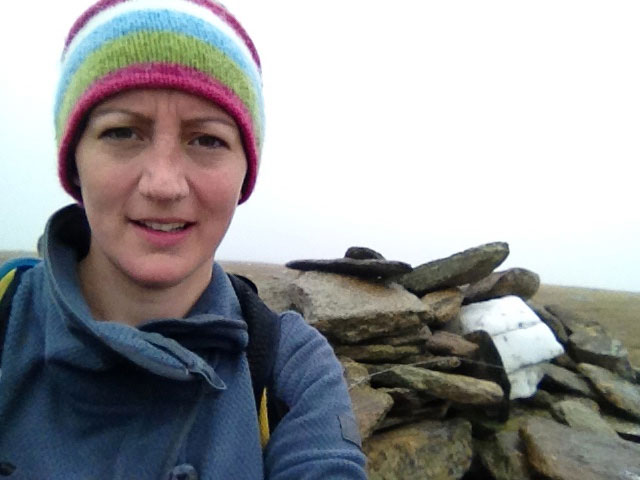 It was then a fairly pleasant walk across to Meall Corranaich, mostly on path, with a few patches of grassy stuff and quite a lot of sheep poo. Clouds were still very low, and I hadn't yet seen the other side of the horse shoe, probably for the best... 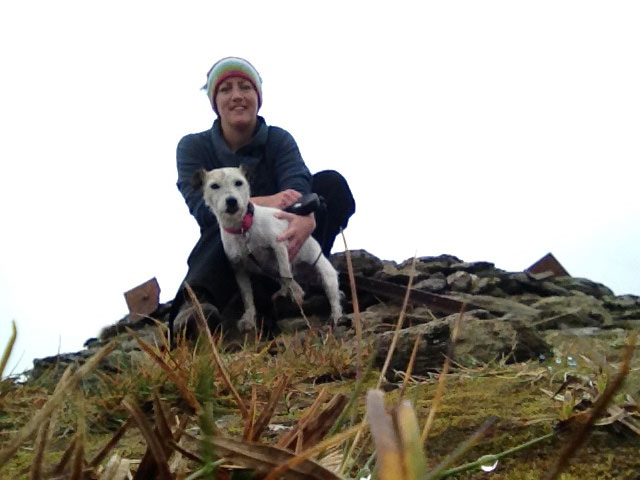 From here, I finally started seeing other people. Rather embarrassingly the first lot came into view just after I was pulling my pants up from going for a wee. Whoops! To be honest, I don't remember much of the walk from Meall Coraniach to Beinn Ghlas, more path following, and drizzly mist... On arriving at Beinn Ghlas I had my only non-selfie photo taken by a couple of chaps carrying a Brazilian flag. 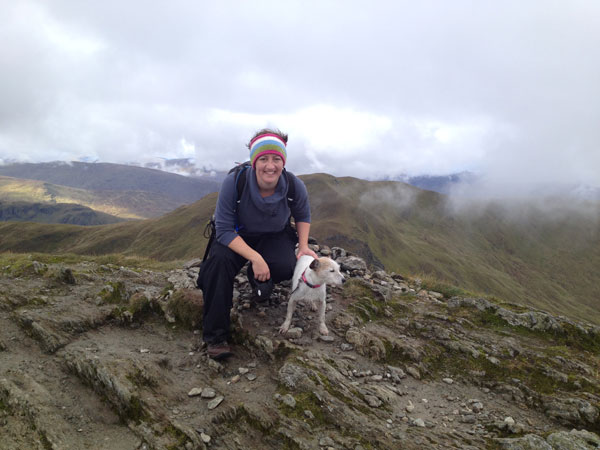 It was like Piccadilly Circus all the way from Beinn Ghlas to Ben Lawers, with that polite British way about us as we got out of each others way with a 'Good afternoon' or 'Hard going?' I found this part quite vile - I loathe steps and walking up them just adds insult to injury. However, the cloud was lifting at last, and a good view of the valley could be had. 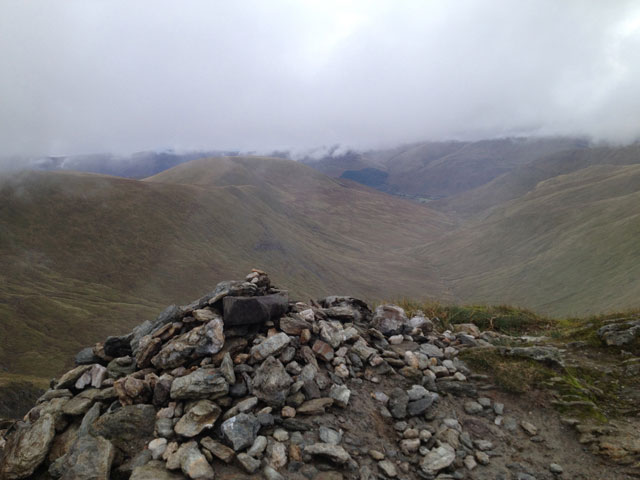 The view back across the valley from Beinn Ghlas

I'd yet to pass anyone going the same way as me, and didn't for the entire route, but a lot of people did give me rather pitying looks when they saw that it was already early afternoon and I still had as much distance or more to walk again. They didn't think I would make it... they were basically right.

Still, I was in good spirits on finally reaching the pair of Ben Lawers cairns, and despite lots of people eating their sandwiches, I took a selfie. You shouldn't interrupt that all great past-time of picnic eating. 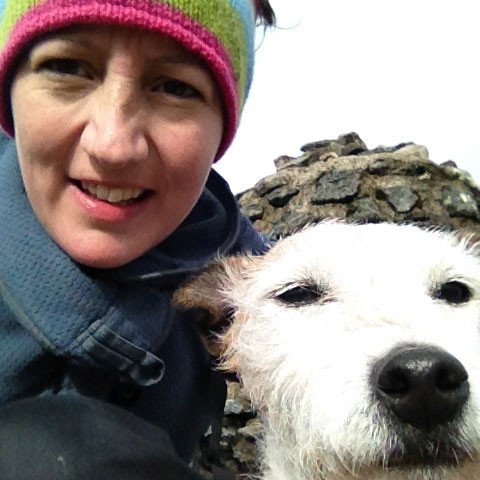 I headed onwards, eating a sandwich on the go, well aware that time was limited, though got some good views back towards Ben Lawers and across the valley. 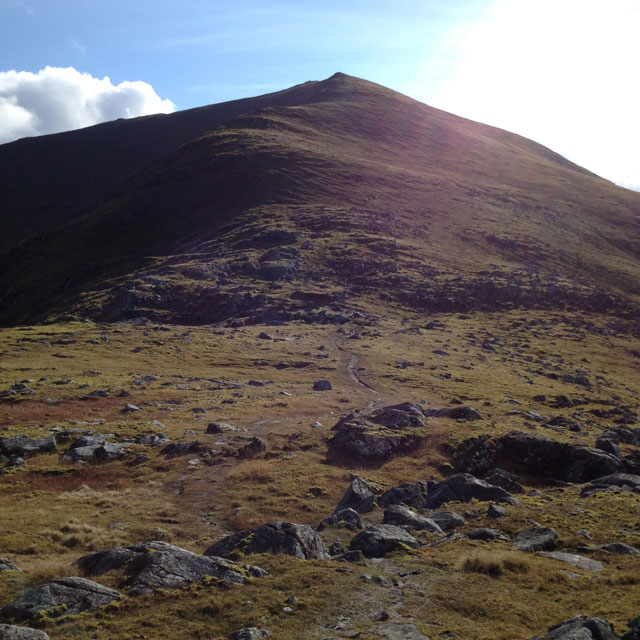 Looking back to Ben Lawers on the way to An Stuc 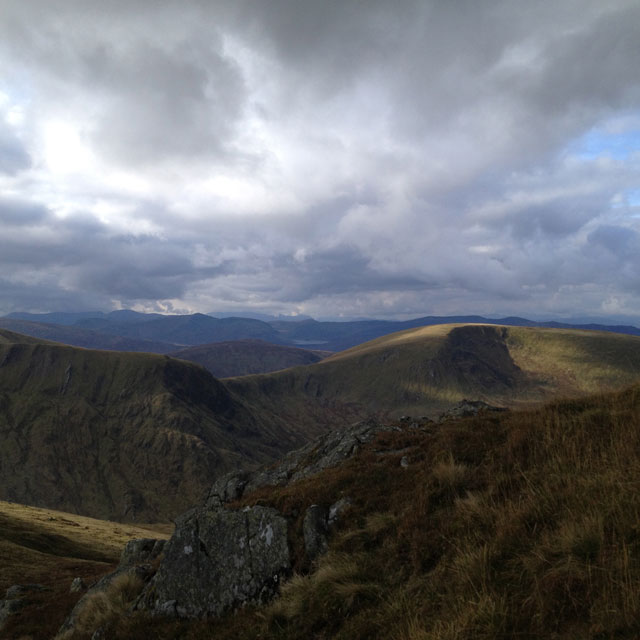 The clouds finally lifted enough to see some of the range

I accidentally went up Creag an Fhithich rather than around it which was rather an irritation at the time, for both my mind and my knees... Still, I finally made it to the top of An Stuc. 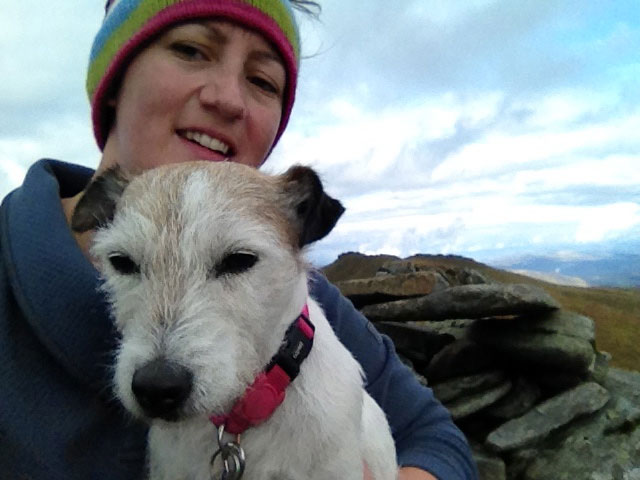 Now for the bit I dreaded the most, the rock scramble... As luck would have it, a lone chap was coming up the other way. So I kept and eye on him as he came up, and he seemed to keep a vague eye on me going down, though I think he was more impressed with my billy goat dog skipping down than whether I was going to crack my head open. Either way, I felt more comfortable knowing I could shout for help should it all go pear shaped. 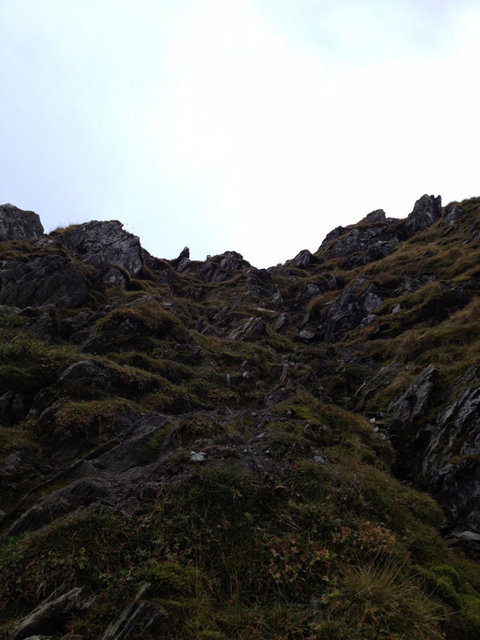 The climb ahead up Meall Garbh looked thoroughly awful, though didn't hurt as much as I thought it would - less of the steps, and more of the grabbing tufts of grass and heaving myself up... I made it from An Stuc to Meall Garbh in about half an hour so took a quick picture whilst making my next decision. 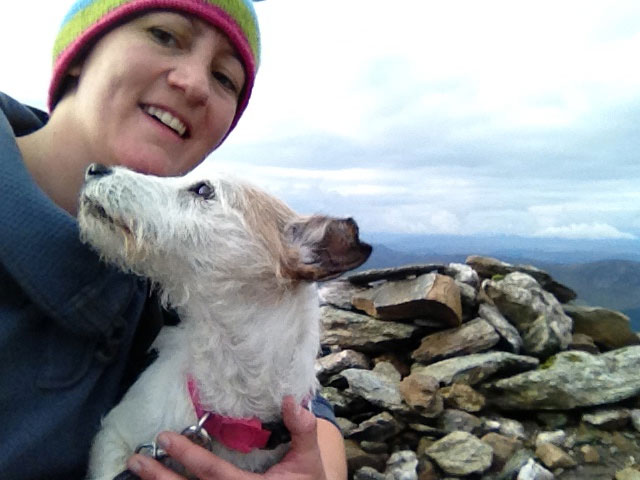 I had the choice to cut out Meall Greigh and head straight back down the other side of the valley back to the car, or risk the long walk across to the seventh munro which might be tough to complete and return from before darkness fell. I checked my OS map and thought that at worst, I could walk down the other side and catch a taxi back... So off I went...

No-one has ever mentioned that Meall Greigh is actually gaelic for 'a boggy b@stard of a munro' or I might have given this a miss. It was an awful slog across, and my white terrier was starting to look like a black lab... Still, 45 tiring and draining minutes later I made it to summit number seven. 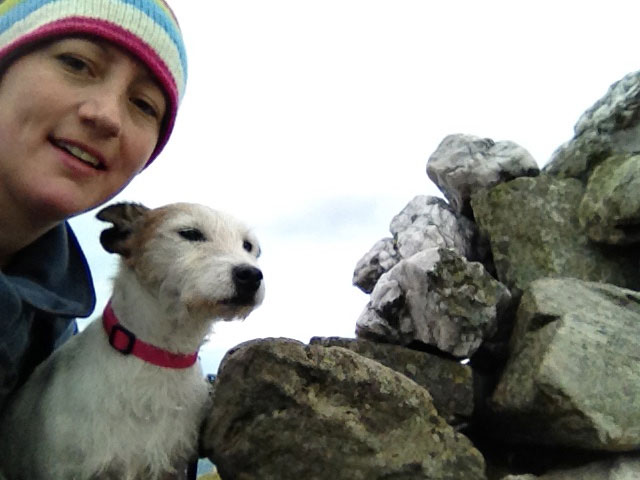 Looking and feeling like death on the Meall Greigh Summit

As I was on my lonesome, I looked at my timings and felt it would be safer to head back to Ben Lawers Hotel and beg a taxi number, rather than go off the path and be eaten by deer and voles, and probably Peggy, should I get caught out after dark. So down the never ending path of doom I trekked, my knees creaking, my water now run out and I was seriously considering eating some of the dogs biscuits. I was also cussing myself for having parked on the Glen Lyon side when I wasn't going to make it. It didn't feel like a total success, and I was about to be £40 poorer from having to taxi it back.

Still, half a pint and a chat to a couple who didn't even know what a munro was, and I was back at the car by 8 or so, and finally in the hotel around 8.30pm. I had to carry the dog to bed from the car, and I followed her into sleep soon after.

It's two days later and I still can't walk... but, this is only my second lot of munros after Ben Macdui and Cairn Gorm, so I'm glad I completed (more or less) the challenge I set myself.

On that note, I'm off to find some new knees...