Keeping Up with the Trail Runners

A wise French master of patisserie and paddling companion, Jean-Luc, said in May 2018 when out on the water:

May eez the bezt month of ze year

in direct observation of the warmth, the daylight time increase, a cautious lack of midges and all the fun outdoors springing to life with colour and sound. I may have paraphrased with a stereotypical accent but his words rang true and found widespread agreement as we paddled happily into the evenings.

The rising summer was to be enjoyed everywhere - and of course, that means the hills and mountains!! Normally, I have a good recollection of events (largely down to my phone notes being the electronic part of my brain of which I am useless without

) but all I can drum up was that May 2018 was very active and busy - new and old pursuits like whitewater kayaking and rollerblading were consuming most of my free time outside of work - a rollerblader-turned-fell runner diverted my attention for the weekend.

Eugene had moved to Fort William to be closer to the mountains and his running ally, Sam, was visiting from England. Introductions were made the weekend prior as I drove down to be willing chauffeur around some honeypot localities, like Glenfinnan Viaduct. The fun ensured a speedy repeat - I was keen to enable a team visit to the Isle of Skye.

The chosen ascent was into the Cuillin, but thankfully for those with a less consistent outdoor disposition (me), Sgùrr na Banachdich would allow for all of the grandeur but with less gruelling effort. I had not ventured past the Fairy Pools so the drive a bit further down to Glenbrittle was refreshing and exciting! The walk description here on WalkHighlands had singled this one out as being a very short distance (7.5km) and recommended at 5-7 hours walk time - and that would be an absolute maximum with Eugene and Sam leading the charge!! We made a leisurely start in the afternoon, not perturbed by the notion of losing out on sunlight. Some waterfall action, early on

After I parked (read: abandoned with care) the car, I looked up and tried to distinguish the route. It looked unformidable and not at all "Cuillin"-y up beyond the dry grass. The weather was beautifully bright and the guys were in light, long-sleeve layers - I might have missed the memo that requested sunglasses but it is likely I was over-dressed elsewhere in comparison. I queried the pace at which the climb would go; I was reminded of some sound logic.
"Only idiots run UP hill" and with that, we all plodded up the good stalker's path with me dotting about the Allt a'Choire Ghreadaidh, taking photos. Not seeing what the fuss is about, yet The warmth was welcome and also a curse; I remember it being exasperating as we started to get a closer look at the way ahead. It wasn't too well defined - a complex of scree, walls of rock and the odd stream to liven it up a bit. Being that my two companions were mountain running athletes, it is a surprise that I never fell too far behind with all the photo-taking and wiping-of-brow. It gave them time to plot the route and left me ample opportunity to follow

Views were opening up behind to the fragmented Glen Brittle forest and were enjoyable as a means of distraction from the sluggish pull up the scree of Coir' an Eich. Beyond that, the sea held up a string of islands and fluffy white clouds, appearing like the rolling background of a video game - a further world not available for interaction. We discussed the sound the stone made as it shifted underfoot - likened to that of smashed crockery. It twinkled and rasped in an oddly satisfying way! Other walkers had obviously had their fill for the day and were descending via Sgurr nan Gobhar, bringing another delightful distraction as they scrambled in the opposite direction from us. We kept at it: no race pace but a tortoise's trot for the win... Eyes to the scramble in the skies

As we claimed An Diallaid, the weather decided to turn "summer" off - black clouds for the Black Cuillin. The view from here across Coire a' Ghreadaidh was the epitome of dramatic and gave us a sense, at last, of why this part of Scotland is so fabled. In a bid to see the clouds pass, we stopped to consult the map and plot our way to the summit. Eugene is not one to recoil but as he poured over the print contours, even he seemed a little unsure whether to proceed. Donning a thin jacket, he continued, as did Sam and I. Despite the wind now whipping up and the cloud somehow sticking firmly to wherever we roamed, the sun still highlighted the coast, the Outer Hebrides and neighbouring parts of Skye. Rum, Canna and Eigg soon appeared as we gained a little more height, in search of Banachdich's summit. From clouds all the way down to cars

Left in awe of Coire a' Ghreadaidh With as little fanfare or warning as any, we sure found it. Sgurr na Banachdich supplants itself 965m above the ground on a tightrope ridge that joins the north to the south - a central nucleus of the Black Cuillin and there's no bones about it - this was one hell of a viewpoint!!
The ridges layered in seams to the north; it was anyone's guess where they might lead to. Looking across between fits of cloud, Bla Bheinn stood proud, recognisable from this angle as though my mind's eye held it to a mirror. Stretching a loooonggg way down was the Coir-Uisg, draining this mountain range's water into dark Loch Coruisk. To the south, we hoped for a glimmer of the Inaccessible Pinnacle amongst the rock spires and jagged edges but only Sgùrr Dearg popped out from obscurity. Sandwiches were consumed to kill time but it was not to be and we could only last so long against the buffeting wind. The presence of lunch heralded winged visitors; the first of which a bold raven which could well have been the same mesmerising individual I photographed on Bla Bheinn. Following that, as we moved back from the ridge, noise and movement in the Glenbrittle skies proved to be a far more dangerous bird - visiting Apache gunship helicopters

on exercise in very scenic locales

if they were on the offensive, I was hoping it was against the summit clag!

Peering over the top to Rum at its finest, with Eigg and Canna Marred by cloud, but still an insane view!! Hoping for a glimpse of the Inn Pinn 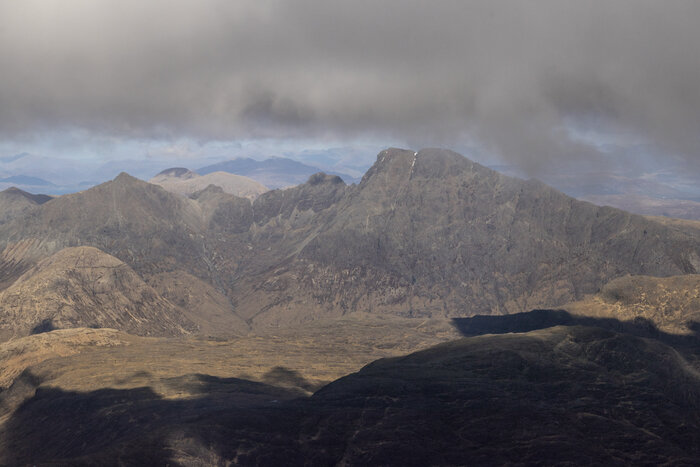 Ridges lead the gaze all the way to Portree

Aside from that, the descent was mostly a reversal of the climb - we didn't go over Sgurr nan Gobhar but slid and tramped down the scree and, at long last, the trail runners were able to stretch their legs a bit. I might have even joined them on a fell-"jog" when we hit the glen floor! Boots not being an ideal choice for running in

The heat was that of a sun-scorched evening and we all went for a paddle/dook in the pools by the car because why not?! The out and return had taken less than 4 hours at 3hrs 38mins so we had made light work of a steep, rough Munro. With time on our side, it was off to another honeypot attraction. After a fairly adventurous drive to get there, Neist Point was a great place to watch the sunset as it blazed away over Benbecula and the Uists. I forever curse my lack of foresight as I decided not to pack a tripod(!) so beautiful long exposures were impossible

The rest of our shenanigans, running around Skye :)

Adding to my questionable judgment, where Eugene and Sam decided to bed down in a tent north of Loch Mor, I turned my nose up at packing any canvas shelter, opting instead to "camp" in my car.
Note to all: - a 5-door Ford Focus might be the most uncomfortable way to not get a night's sleep, barring some form of torture frowned upon by the United Nations. As the gusts tore at Eugene's tent, not managing to do any damage or disruption of note, I became the unwilling participant in a rattling tin can and suffered an excellent migraine. I don't want to ever see Skye at 0100hrs again...

Anyway!
I digress. May is the best month of the year and if you are looking for the best way to get an introduction to the Cuillin, it's Sgùrr na Banachdich. The battle with the scree is rewarded with views along ridges and into coires that (if you can see them) almost defy reckoning and coastal views that are awesome enough to enjoy, tripod or no tripod!
Click to mark this as a great report. Register or Login free to be able to rate and comment on reports (as well as access 1:25000 mapping).

Wild Camp via the Low Sea of Quoich

Friendships Forged in Tea - An Teallach

The Bynack bypass to Cairn Gorm