I was looking for one more decent day out before Xmas. Francis finally had a pair of 'proper' boots I'd picked up on Gumtree for him that he was eager to test. We both still had one eye on Schiehallion in the New Year. Ben Cleuch fitted the bill perfectly. Not too far away. A nice loop. And, I noticed, exactly the same amount of ascent as Schiehallion - 731m!

We'd originally planned for the Saturday but the weather forecast changed over night so we postponed to the Sunday - and were mightily glad we did as we watched the rain hammer down all Saturday afternoon. Sunday dawned bright and clear however, with the forecast sunny, cold with a 'gentle breeze'. So off we headed to Tillicoultry.

WARNING: This route to Ben Cleuch involves overcoming The Law. And failing to overcome the urge to make bad puns about this. Readers of a sensitive disposition be warned. The blog title is just the start. Things will get much, much worse.

Having parked up and booted up the first decision was whether to take the 'closed' path up Mill Glen or follow the detour. Sgurr's recent post had reassured me that Mill Glen was actually passable and Francis liked the rule-breaking of it, so up the glen we went. 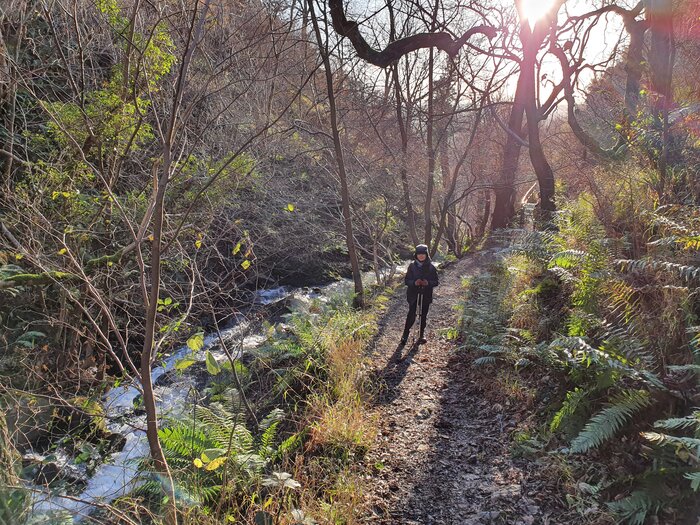 It was quickly clear that the Glen path was still being used by everyone from fell runners to dog walkers so we didn't feel quite so rebellious. It was easily passable with a bit of care - just one short scramble helped by a handy fixed rope. 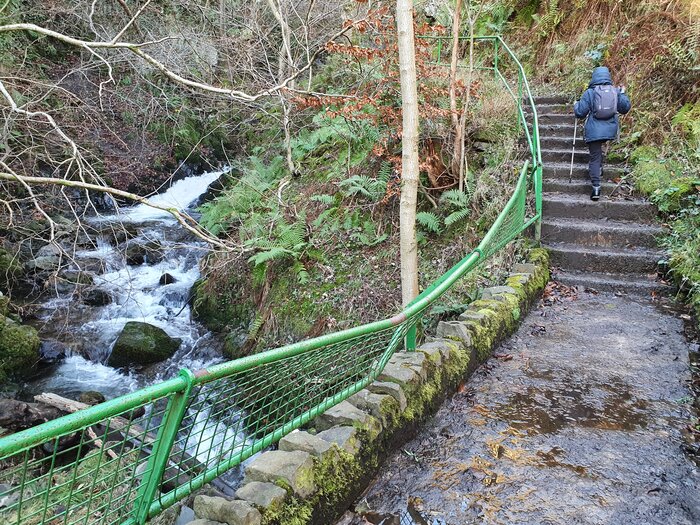 The sunshine, the trees and the constant rush of dozens of waterfalls made for a very enjoyable walk as the path climbed the glen criss-crossing the stream on a series of bridges. 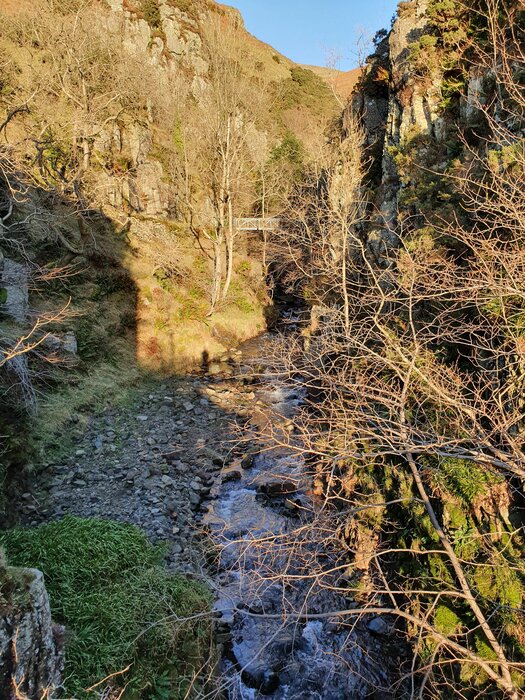 Coming out of the trees the first slopes of The Law hoved into view, encouragingly sunlit but dauntingly steep. We crossed the stream one last time and scrambled up the rocky outcrop where the uphill path begins. Having warmed up by this time we even shed our jackets in anticipation of the effort to come. Time to face the full might of The Law! 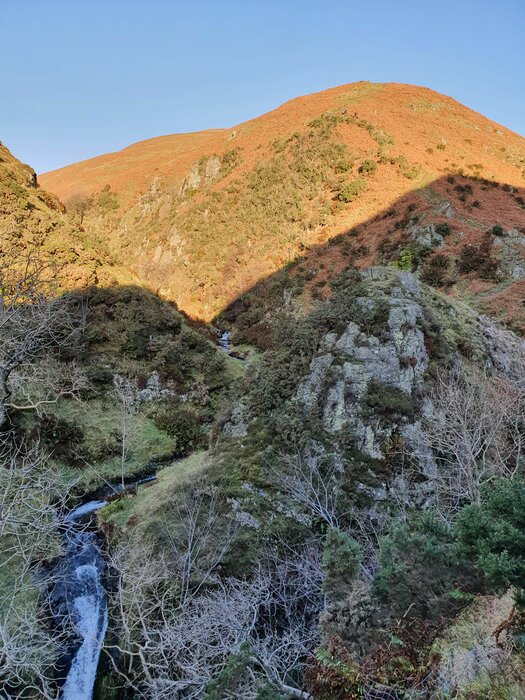 Not going to lie, that first stretch was tough going. I tried to get Francis on board with my 'small steps, steady going' mantra but he was less than zen-like about this and demanded more jelly babies and less 'advice'. 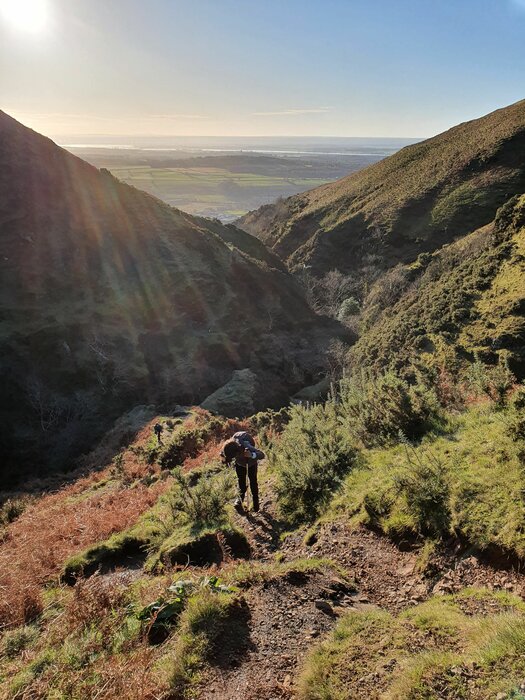 Taking The Law into our own hands

Things did ease a little but the improvement was only relative. There was always another steep section ahead. 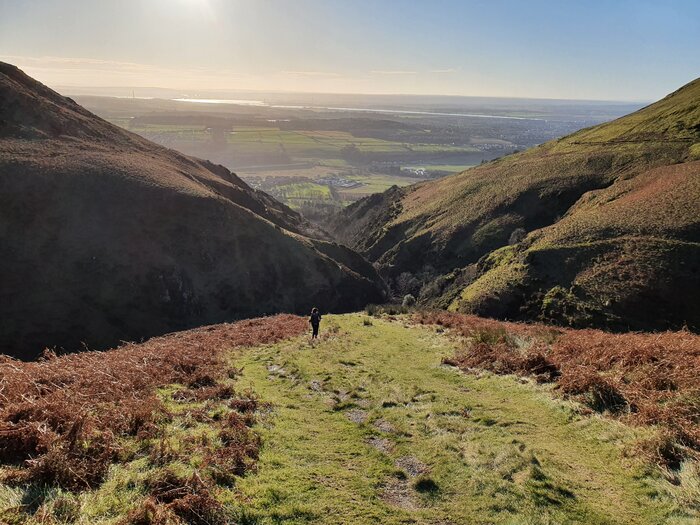 It was difficult to settle into a rhythm and there were frequent stops at convenient rocks 'to admire the view'! 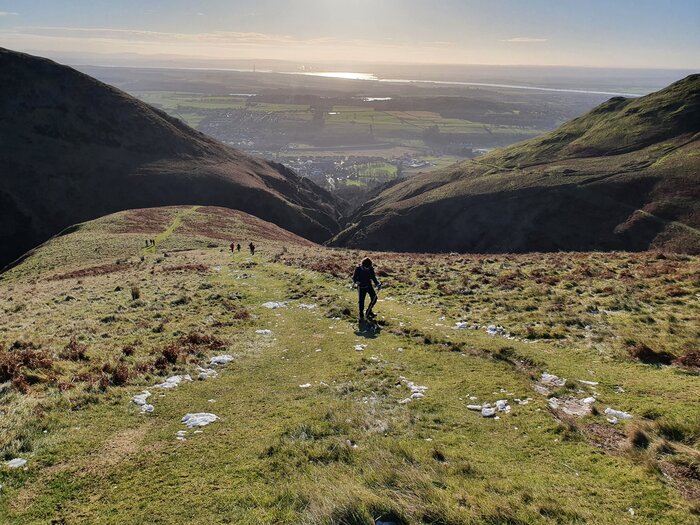 True what they say, The Law is hard but it is The Law! 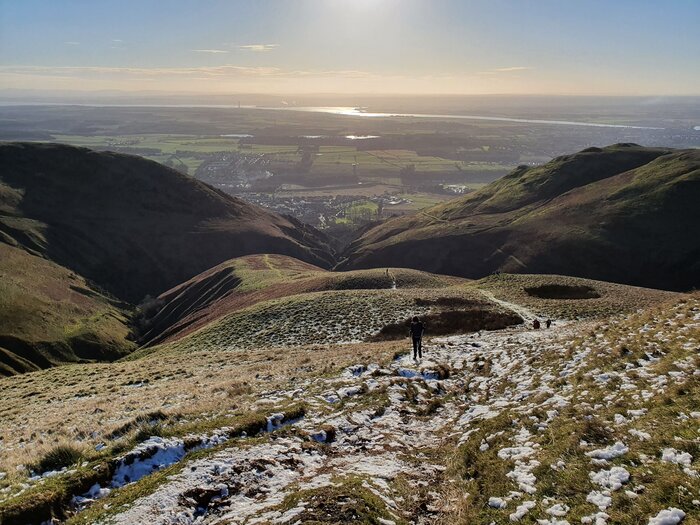 Long arm of The Law

We did finally get past the lumpy section and got a welcome clear view of the path to the summit. Not only was it a nice steady gradient but the whole scene was dusted with snow and felt very dramatic. 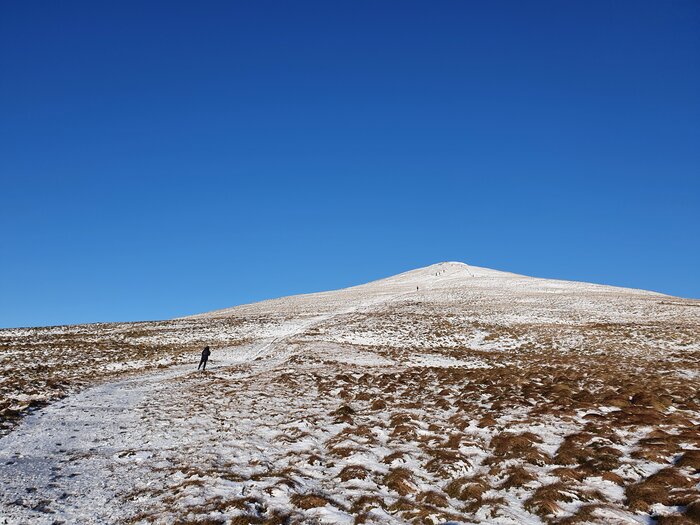 The 'gentle breeze' by this time had become an icy knife so we stopped briefly to put our outer shells back on and dig out our gloves. Then we crunched our way upwards feeling positively Alpine! 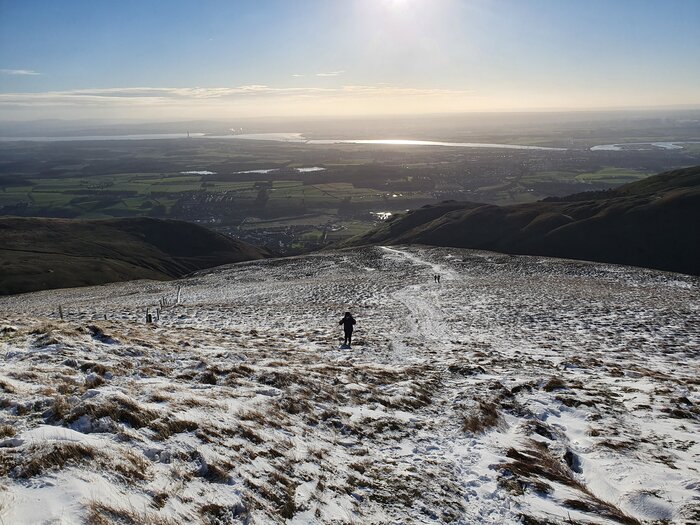 We fought The Law

It's a pity that the feeble summit cairn doesn't live up to the effort required to get up there but the views more than make up for it. And knowing that all the hard bits (and the bad puns) were behind us now, we were feeling pretty pleased with ourselves! 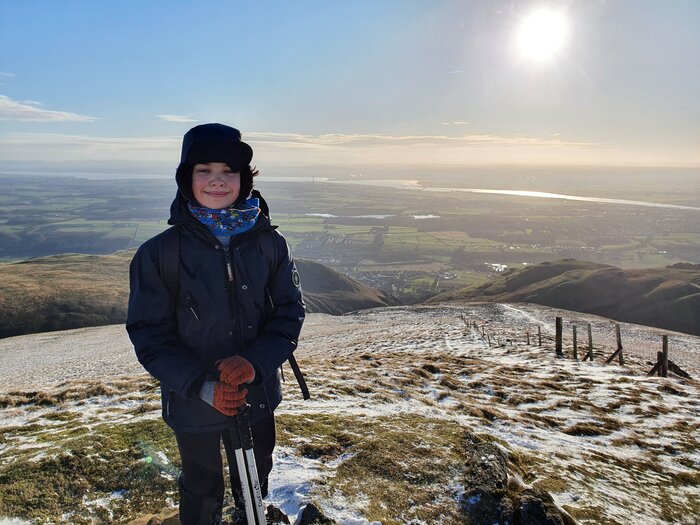 A quick shot of hot chocolate and a check that the new boots were performing well (they were) and then we set off on the straightforward traverse across to Ben Cleuch itself. 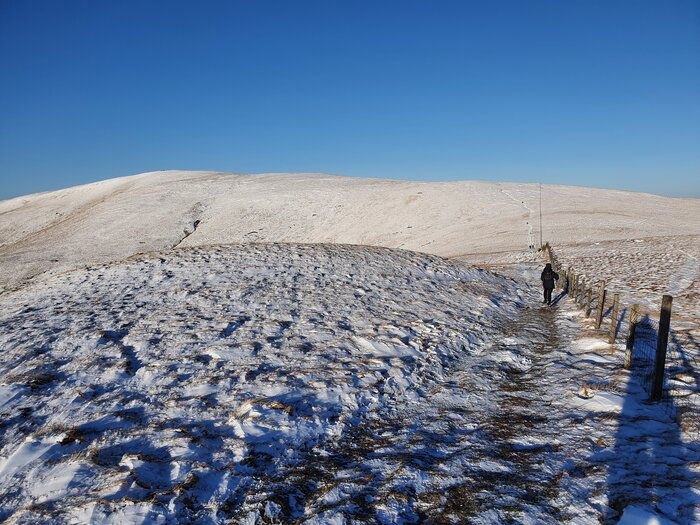 The combination of the snow and the sunshine transformed this unremarkable section into a sparkly winter wonderland. 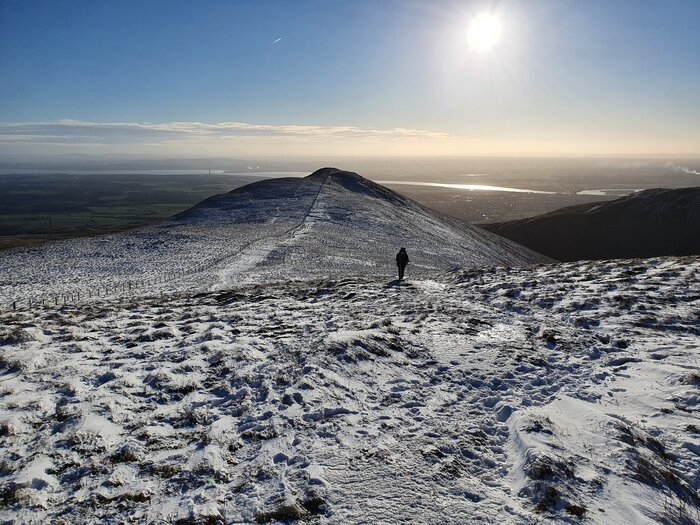 We were both grinning like fools as we crossed. The wind even eased up, letting us slow down and relish the joy of just being in such a magical landscape. 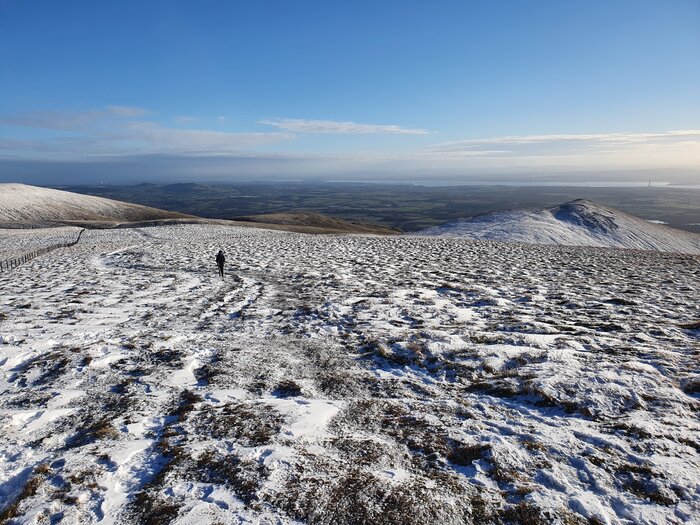 Satisfyingly, Ben Cleuch was, as Francis observed, 'a proper summit' with trig point, cairn, wind shelters and incredible views - especially North and West. Behind him here I could pick out - left to right - Ben Lomond, Ben Ledi, Ben More, Stuc a' Chroin, Ben Vorlich and then over to Beinn Ghlas and Ben Lawers. Amazing. 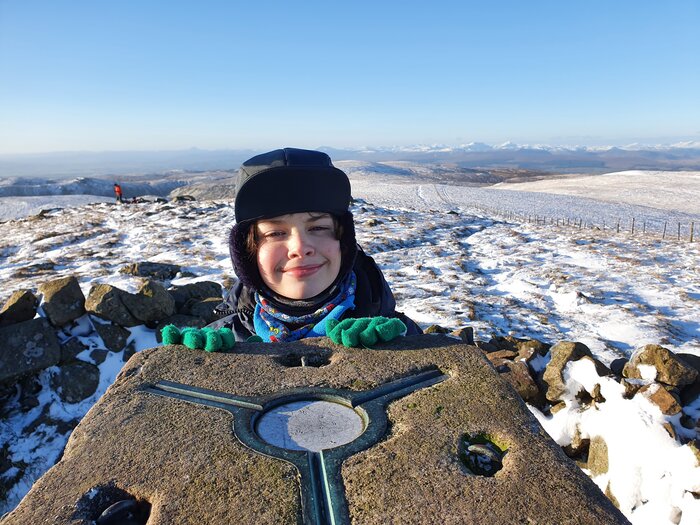 We finished the hot chocolate and discussed our route options. Carry on over to Ben Ever and complete the circuit or head back the way we came? I was conscious of the short daylight hours but was confident we had more than enough time to complete - if Francis felt up to it. He did.

The summit was quite a busy place and we were curious what others were doing. We watched as one couple headed back toward the Law. But two other groups began to set off for Ben Ever. We headed after them. 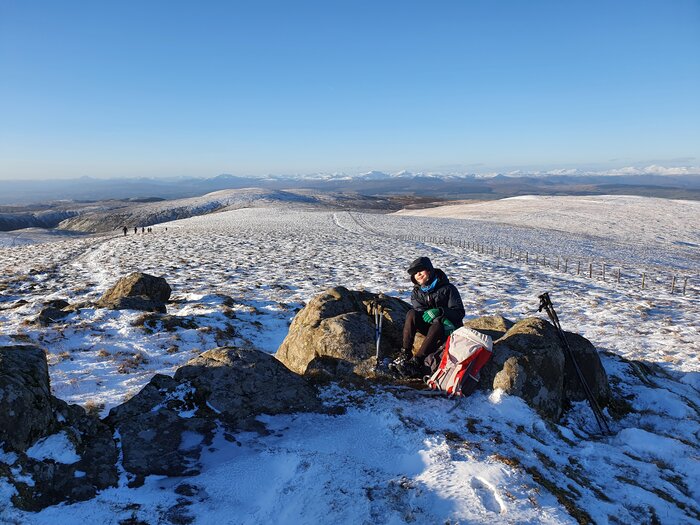 If there's one thing small boys love it's watching grown adults fall over in the snow. So Francis thoroughly enjoyed skipping down the slope to the bealach while the rest of us gingerly picked our way down with the occasional loss of dignity! 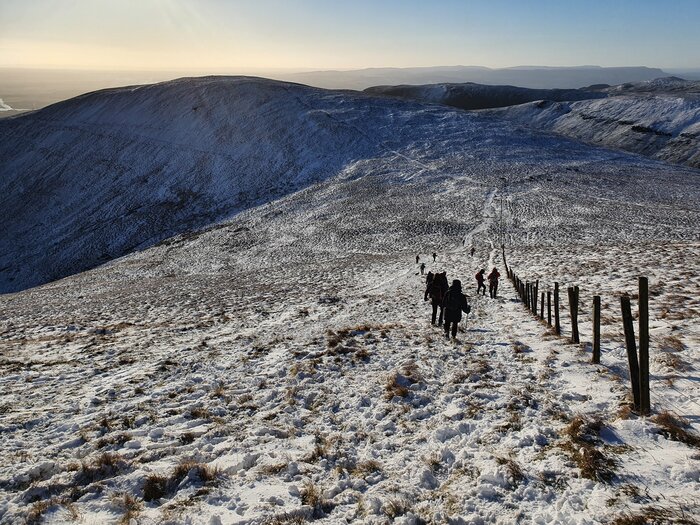 The procession across to Ben Ever

Once across the stile, the path up to Ben Ever was an easy stretch with plenty of time to enjoy the spectacular surroundings. 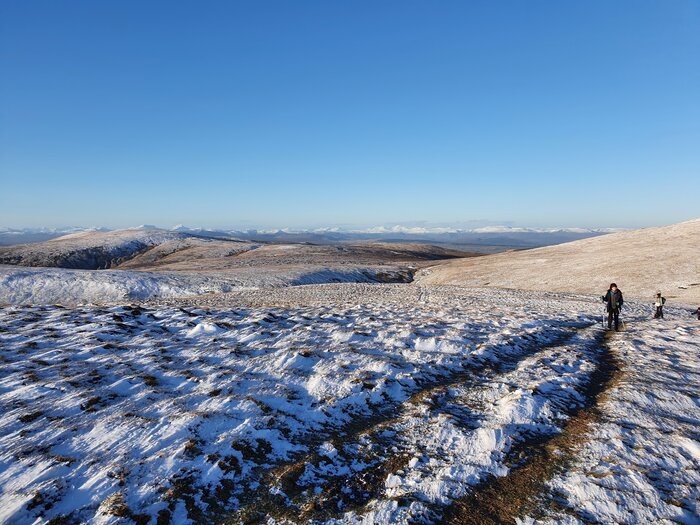 Ambling up Ben Ever

Over the top and the whole broad ridge was laid out ahead of us. This section was reward for all the effort earlier. The views beyond were so distracting we slowed down to make the descent last longer. 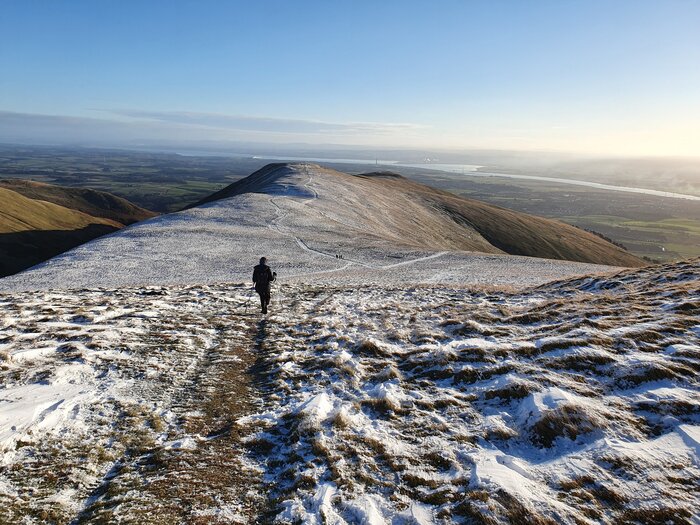 The view SE along the ridge past Calf Craig to Wood Hill. River Forth beyond.

Past Calf Craig the decision is whether to carry straight on to the southern most point of the ridge for more views or cross the fence at the stile to trace the descent path over Wood Hill and down the SE ridge. 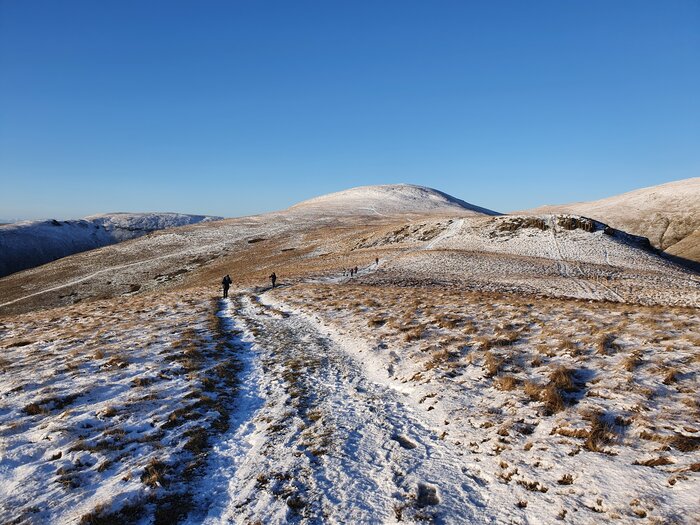 Descent from Ben Ever.

Most of our fellow walkers opted to carry on but with the sun lowering we decided to play it safe and head for the descent. 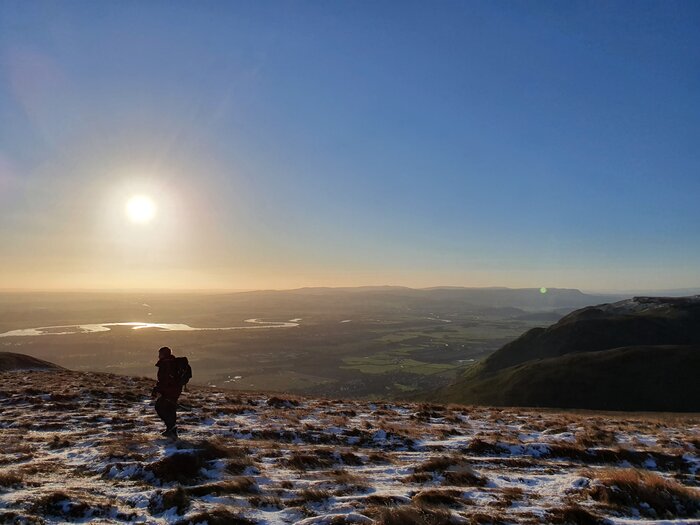 Sun getting low in the SW across the Forth valley.

The descent was steep in places but not difficult. We eventually picked up the path toward the quarry and then cut downhill at the marker cairn onto the path which zig zags back into Mill Glen. I was glad not to be navigating this section in the gloom. It was narrow with a steep slope into the gorge on one side. Francis, of course, was skipping along it like a mountain goat. 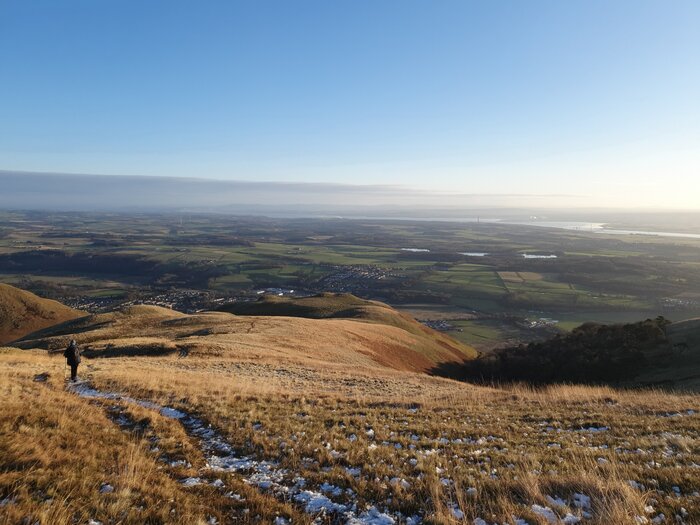 Heading down the SE shoulder to pick up the path back down into Mill Glen.

Once back on the Glen Path it was an easy walk back via our old friend the fixed rope. We made it back to the car in a bubble of contented silence.

I was thinking that it had felt like three different walks strung together - all completely different in character. The wooded Glen Path. The steep haul up the Law. Then the airy, wintry ridge circuit. How incredible to have that variety on one route in just a few hours.

As I debooted for the drive home, I asked Francis for his verdict. He thought carefully for a moment.

"Epic."
Click to mark this as a great report. Register or Login free to be able to rate and comment on reports (as well as access 1:25000 mapping).