Id wanted to climb these two hills for some time but just never got round to it,mainly as id changed plans last second to go elsewhere,but today i was sticking to the plan as the weather seemed to be on my side and its not often that happens.
I arrived at the car park around 8am and was soon on my way.I hadnt been out in the west since it was covered in snow and wasnt sure how much would be left,i could see from the car park it was just the tops that had a tiny amount of snow on them but didnt want to get all the way to the ridge and find it smothered in ice so opted for the winter boots. Ive heard a lot of folks talking about the route from the bealach between these two hills to the little AE ridge as being pretty steep and loose and this was on my mind pretty much all the way up Stob a'Choire Odhair,nusure whether id manage the two or would have to settle for one i pressed on up the steep winding path and was soon looking out over Rannoch moor. Looking over at my next target i could see a fair amount of snow hanging in the gullies and again wondered what my route would be like,only one way to find out so headed down to the bealach for a better look. Once i reached the point of ascent i had put the idea into my head that this was gonna be an epic climb up a scary slope,i followed a faint path for what only felt about 10 mins up the steep bouldery slope and emereged onto a broad ridge,wheres the scary bit i thought,am i on the wrong hill?nope,i was on the right hill alright,id just convinced myself it was gonna be a hair raiser and it really wasnt,funny how the mind runs wild.few,i felt so relieved,all that fussing for nothing.Now onto the fun part tho,the ridge itself was great fun,even if it was snowing by now. Sadly the ridge didnt take long at all to cross and i was soon on top of Stob Ghabhar,what a view from here. Had my lunch and sat for a good bit before i started to get a bit cold,could have sat and looked at the views all day but decided to head down and take the walk out while the sun was shining,the waterfalls on the outward route are stunning. I had to steep my feet in the river before walking out to the car,ouch. 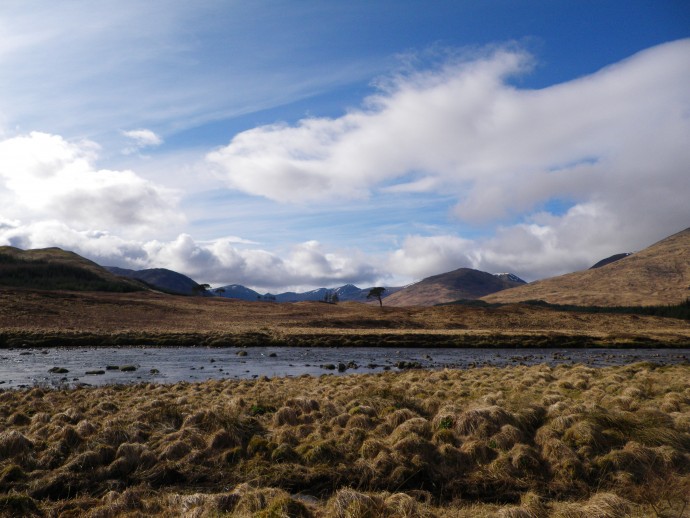 A day in the mamores