Since I started hillwalking in July 2014 I have been meaning to start posting walk reports but I always forget to take pictures other than a couple of panoramic landscapes per walk so I decided to start this year after the winter season when my hands would be warm enough to constantly take photos.

I never post walk reports, nothing eventful ever happens on my walks

- Me sometime around 8am enroute to Glen Etive.

Decisions, decisions. I was desperate to get out on the hills after a couple of quiet weekends but the weather forecast was fairly erratic. A week in advance it looks good, as the weekend approaches it gets progressively worse, Saturday night and I am looking at a forecast where Sunday is all but promising heavy rain on lower slopes and heavy snow above 700m.

A little bit bemused that I had left Saturday as a rest day to help my dodgy knee recover and a bit of indecisiveness about what hill we were going to climb as we jumped from The Tarmachan Ridge to Etive Mor to Sgor na h-ulaidh to me sneaking a short but exciting corbett in under the radar, Beinn Mhic Chasgaig, a nice short one with a bit of a challenge and good views at the summit if we are lucky.

My lift arrives at 7.15 Sunday morning, the weather is dry and bright in Glasgow and after checking the weather forecast one last time I am pleasantly surprised to find a forecast of sunny intervals all day and very little wind, a huge contrast to what was forecast 12 hours previously. We arrived at the little lay by beside the gated bridge crossing the river etive around 9.40 and set off just after quarter to 10. 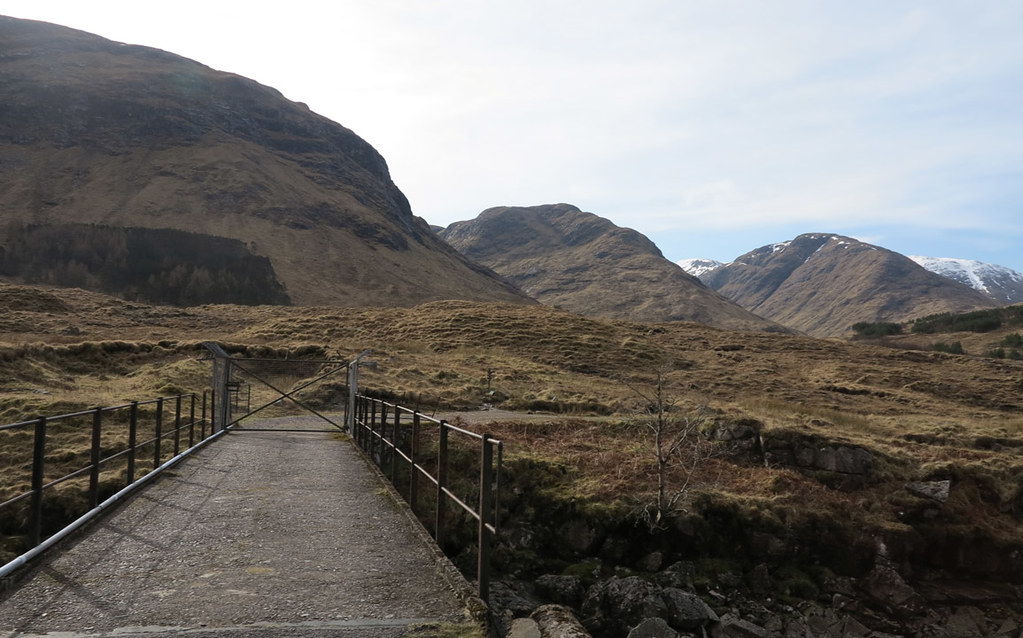 The gated bridge over the River Etive.

After passing through the gate you are met with a sign asking you to take the waymarked bypass path to avoid the cottage further upstream. The path was wet but not overly boggy, the theme of the ground on todays walk. We crossed a stile and shortly after met a more assured wet and slabby path following the Allt a' Chaorainn upstream. 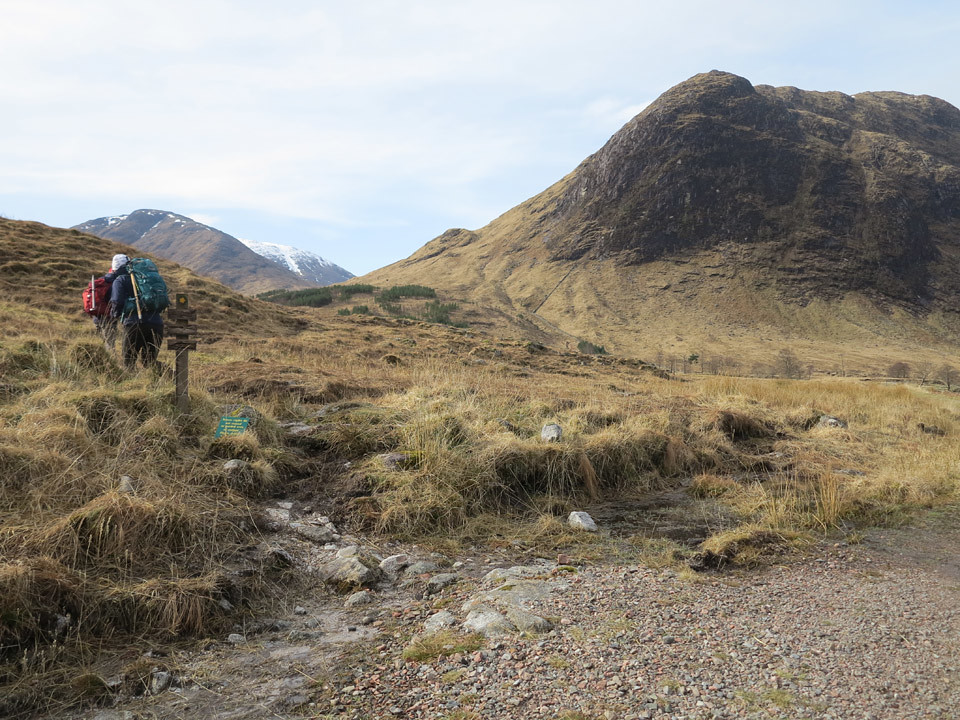 The start of the bypass path 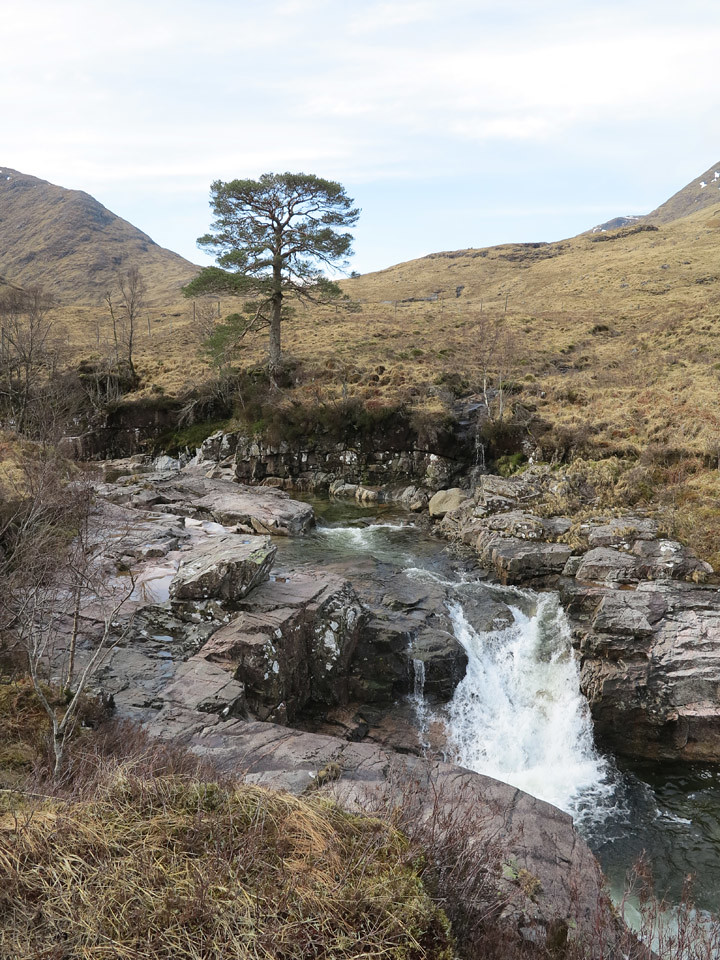 Waterfall on Allt a' Chaorainn

Passing through another gated section we came to a point where two tributaries meet and without any real thought I think we are at the descent path off Mhic Chasgaig, in my head to our left is the western faces of Beinn Mhic Chasgaig (correct) and Coire Aiteil (incorrect). At this point I am thinking we need the river/stream to be on our left and what I (incorrectly) think is the Allt Coire Ghiubhasan is currently on our right. 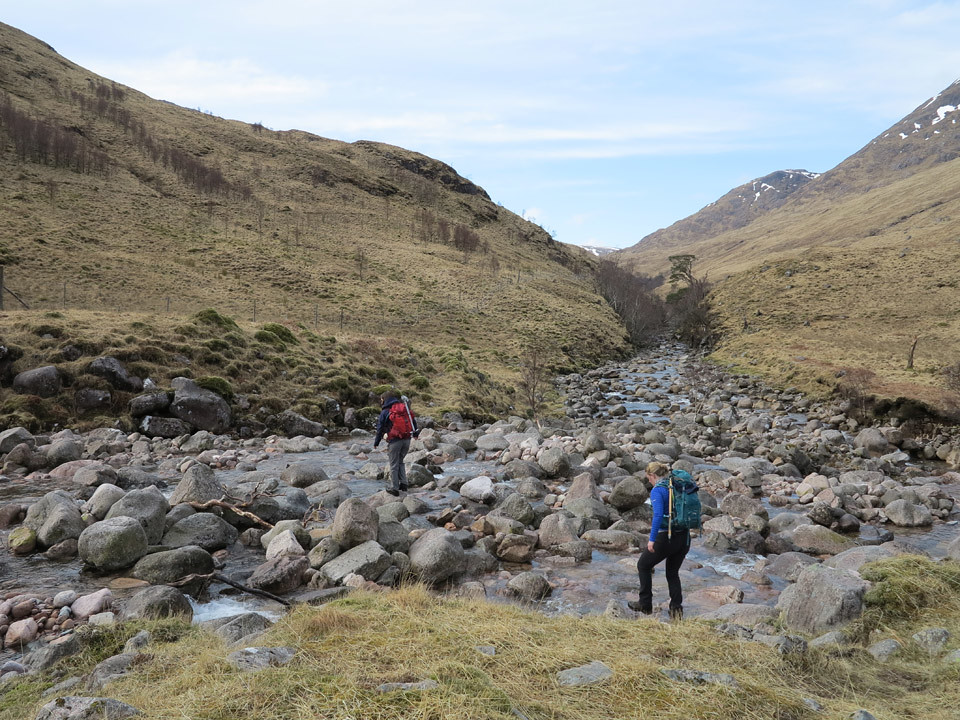 Searching for a crossing at this point is proving impossible, we need to go further upstream. It doesn't feel right but I am now at the back of the group chasing the girls up a gully that seems very like Coire Ghiubhasan from our current perspective. However there is no way this is the regular route, what was once a clear path has descended into a river side scramble. 300m along we stop. The route is now impassable but the water is low enough for a stream crossing with shoes and socks off to an easy grassy scramble up the other side. At this point I'm not impressed, the thought of a river crossing barefoot has never been my idea of fun, I was well aware it would come one day but today was meant to be a dry, easy walk. Socks and shoes off and to my surprise the cold water doesn't bother me mentally but physically my feet just seized up and each step was like lifting leaden feet. Across the other side shoes and socks are back on and all of a sudden I feel refreshed and happy. We are on the right track! The landscape makes sense! 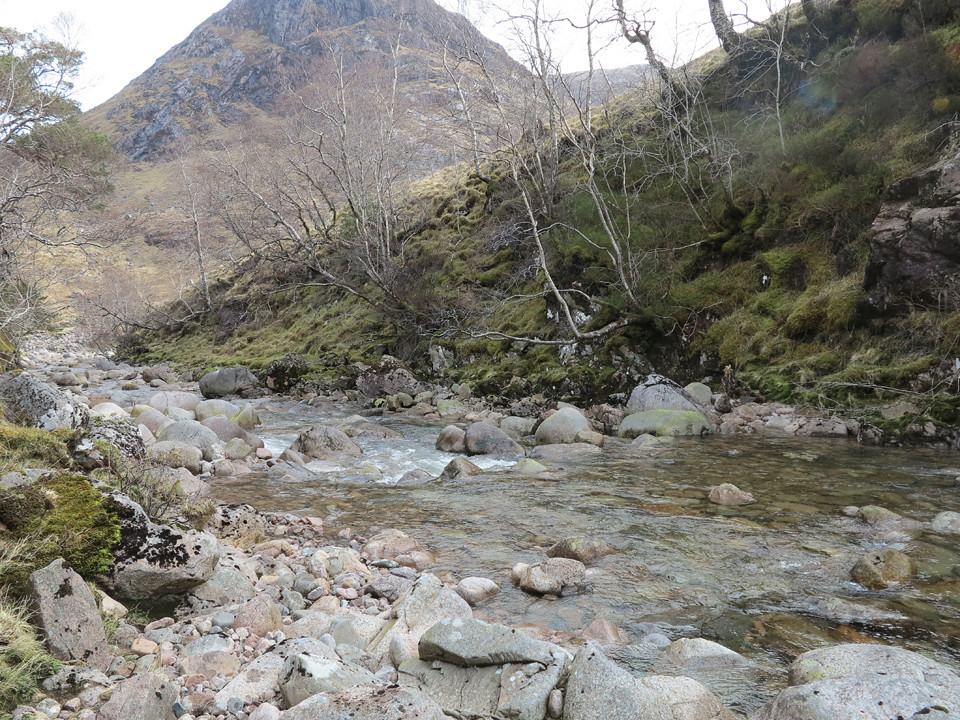 Looking back to where we crossed the stream. Beinn Mhic Chasgaig in the background....

We pass another merging of tributaries which should have sent alarm bells ringing but the wooded gully section further up makes sense, this is where the wooden foot bridge is. We continue up this corrie for a further 20mins before I begin to think something isn't right, this is the first time I think we might be going in the wrong direction. Yes there's a faint path, yes everything looks like it did on the map but the last time I looked at the map was at the car and I hadn't even touched my compass. I'm not quite sure why that was, it's not normal practise for me, I'm not immune to the odd wrong turn, it has happened a handful of times but I usually rectify that within a few hundred metres. Out comes the map and I realise we are over a kilometre southwest of the path. A wave of frustration hits me and we stomp back to tributary merging number two. An awkward but quick rock hopping of two tributaries brings us west of Aonach Mòr, we march round a well formed but once again very wet path and find ourselves back at the point I had earlier believed was Coire Aiteil around 1 hour earlier. 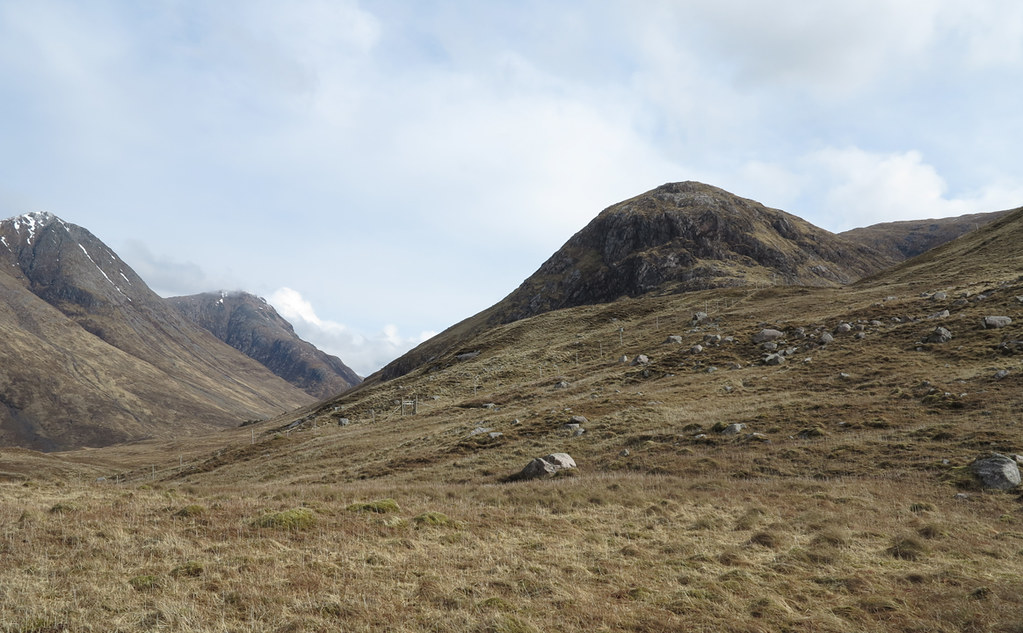 Powering back to the correct hill.

We headed up Coire Ghiubhasan at a fair rate covering the 2km in 25mins, the path was wet but clean and relatively hard pack. It's a nice corrie but after the considerable "detour" Beinn Mhic Chasgaig's southern face was looming over us in the corner of my eye. It looked a long way up and it was only a corbett. 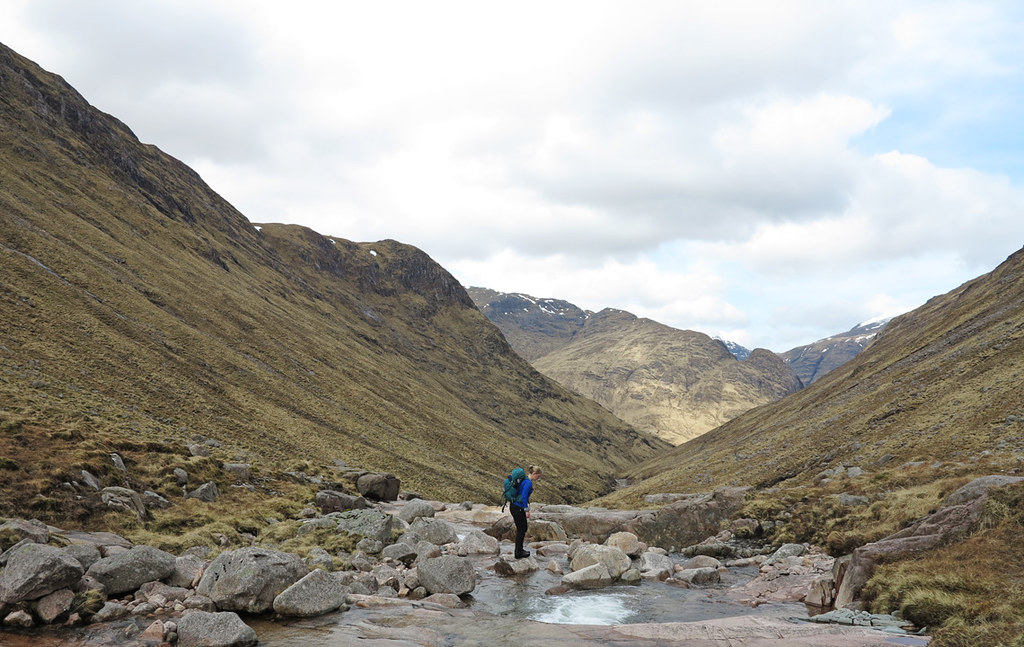 Crossing the water above the waterfall.

We reached the waterfall crossing point at 13.10, water crossing number 5, and stopped for a food break. We were well aware that the next section was the steepest of the day but from our lunch spot it didn't actually look too bad, we only had to cover 300m of height to the bealach.

At 13.20 we headed on up the hill with the bealach in sight, this would have been a much more daunting climb in low visibility, it started off steep and remained that way. The steepness was not the worst part. There were areas of very soft landslide or avalanche debris and large loose boulders which required careful navigation to avoid, generally at all times the best route was above them.

The back of Coire Ghiubhasan

As we got nearer the height of the bealach the wet grass that was mentioned in the walk description came into play. At the time of reading I thought it couldn't be that bad but standing there on the steep slopes it was horrible stuff. It was easily avoided but I wouldn't like to have been on that hillside after a period of rain.

There was a great feeling of relief as we came off the slope just above the bealach some 40mins after we had packed away our lunch, the day had already been a fair bit longer and more stressful than it ever should have been, the hardest work of the day was nearly over.

The walk up to the summit of Beinn Mhic Chasgaig was a grassy and rocky affair which was tiring on the legs but the summit was soon gained and the views were a great reward. Creise and it's tops behind us were solid white but our summit was snow free, the difference of a few hundred metres. The views from the top were vast, the usual sights you get from every other summit in Glencoe from another perspective. 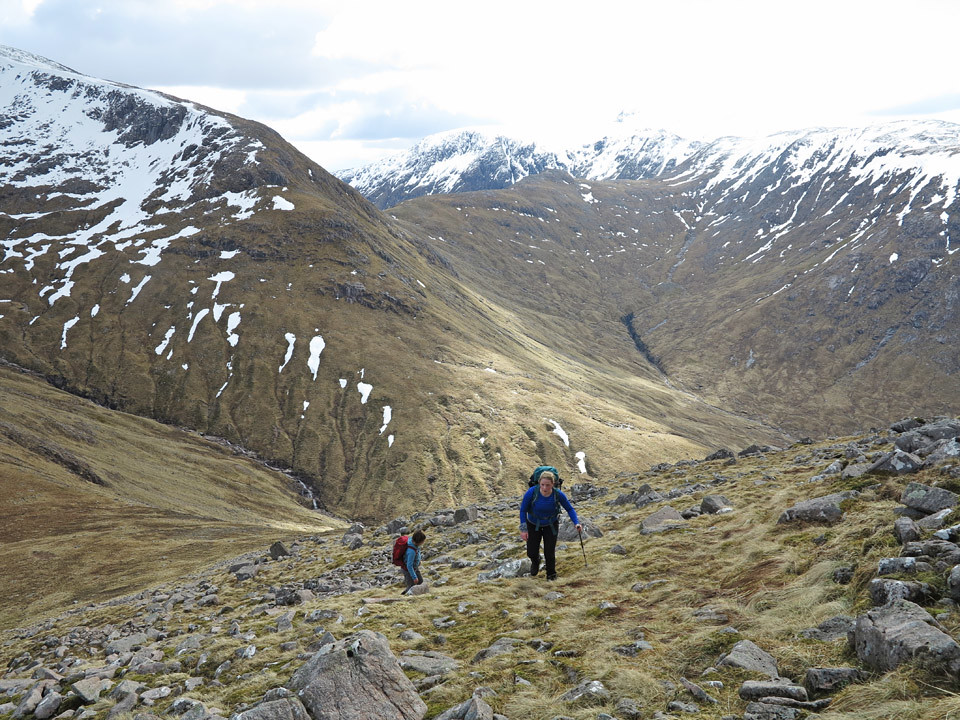 From the bealach to the summit

The descent starts off quite gently heading south west off the hill but gradually starts to gain steep, rocky, wet, greasy characteristics. It's quite important to carefully pick your way down this slope, from what I could see there was no obvious path, a bit of a free for all. We managed at a slow but steady rate as the path we had ascended the corrie on, visible in the distance, got closer and closer. 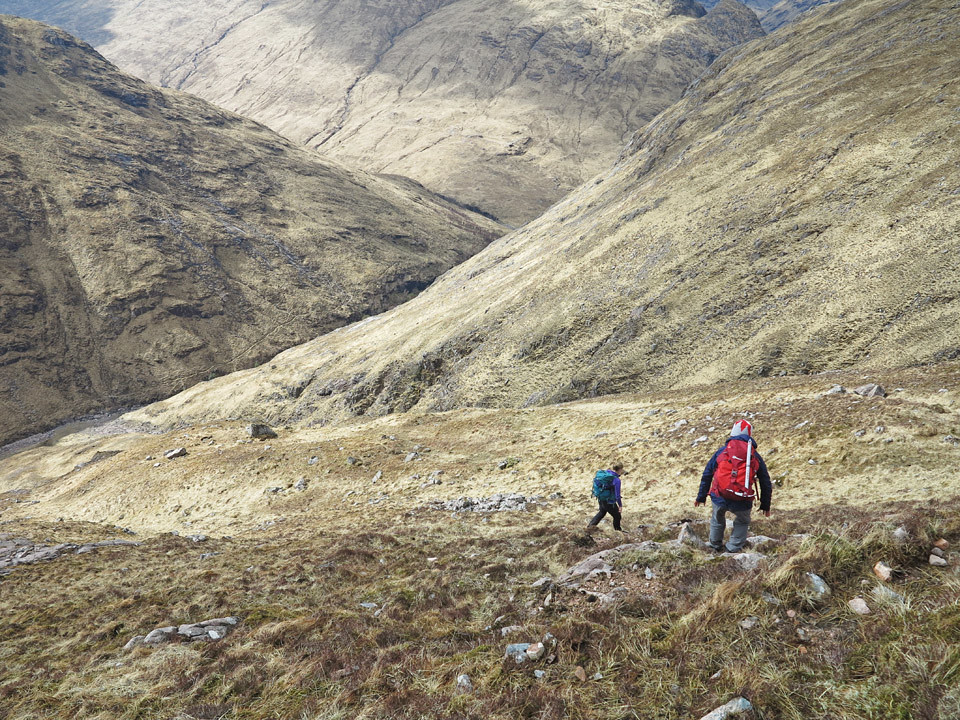 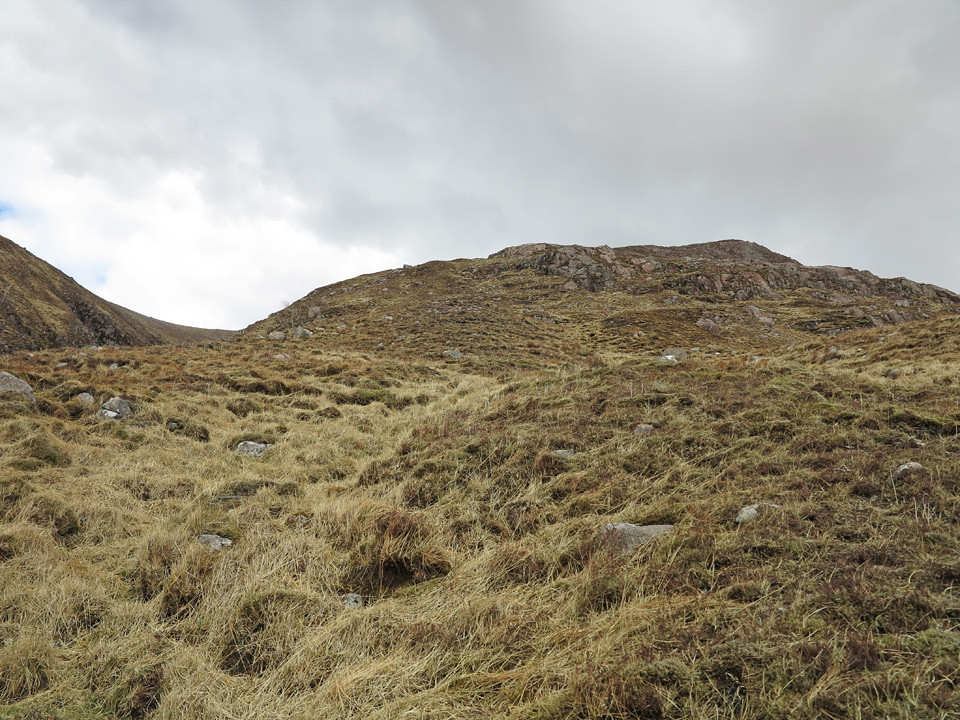 Looking back up some of the descent 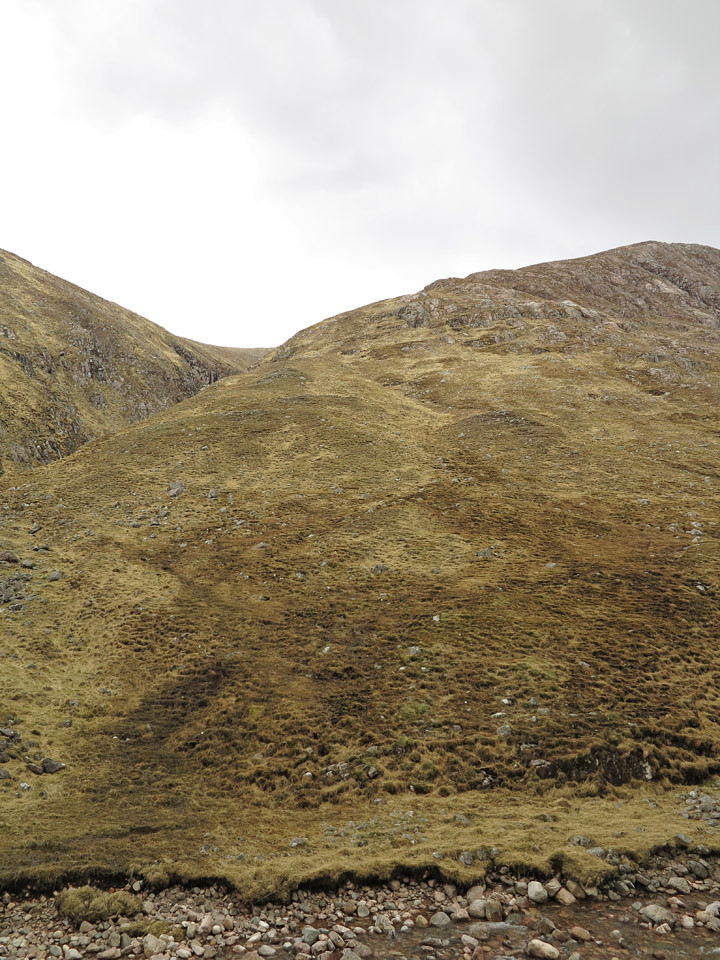 The river crossings weren't finished with us yet, crossing number 6 was just as awkward as all the others but I managed to keep my feet dry. The same can't be said for the girls who I think had had enough of the intricacies involved in crossing River Etive tributaries in April.

Marching back down the wet but hardpack path we came to the wooden bridge, the bridge we had been looking forward to crossing all day and we would only cross it once. It was over relatively quickly, the novelty of it long gone in our minds, the rain was starting. 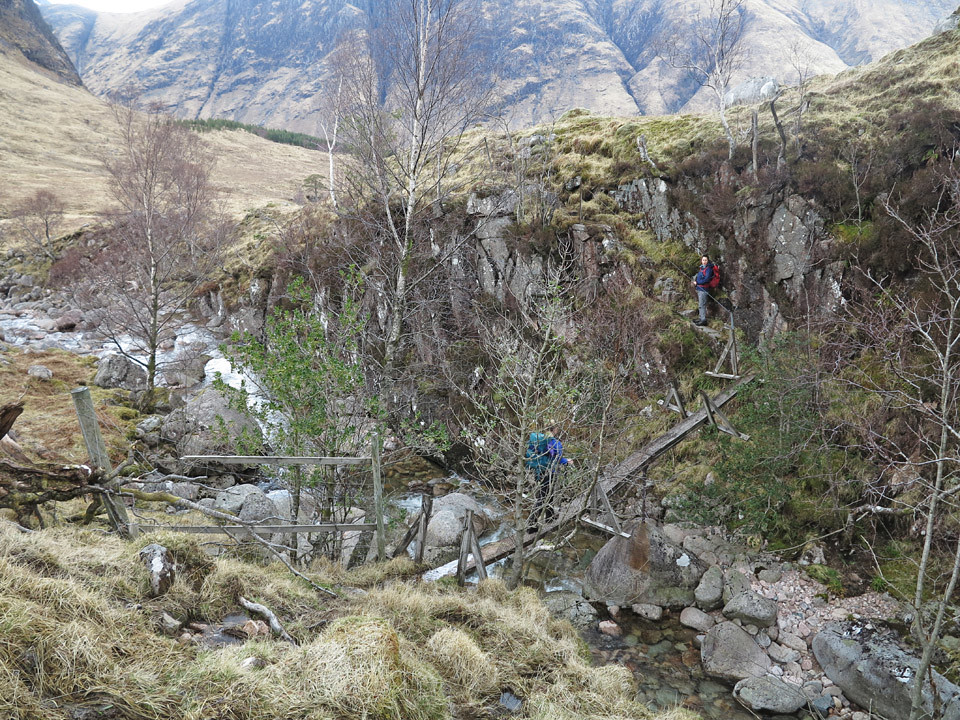 Marching down the path we had ascended at the start of the day one of the girls had decided she was going for a quick swim in the Allt a' Chaorainn. The barefoot river crossing 5 hours earlier was also her idea, two Scots put to shame by a Sassenach from the far south.

Whilst she went for her swim I stood looking back at the hills reflecting on how our mistakes were made and found myself still mistaking Aonach Mòr and Meall Garbh for Beinn Mhic Chasgaig and it's many faces, I decided then that it was an easy mistake to make if you don't prepare properly. I will take more care to navigate the glens in the future instead of waiting until I think I am about to start ascending to start navigating from map and not from memory, I think the good visibility caught me out.

Nearly 6 hours later and we were back at the car. Not too bad considering our lengthy breaks and 2km "detour".


Beinn Mhic Chasgaig.gpx Open full screen  NB: Walkhighlands is not responsible for the accuracy of gpx files in users posts
Click to mark this as a great report. Register or Login free to be able to rate and comment on reports (as well as access 1:25000 mapping).