A perfect day on Ben Macdui

We had our annual winter trip to the Highlands, and this year we made a change to our usual West Coast trip and decided to spend a few days in the Cairngorms in order to explore the Northern Corries. Against the run of recent luck, we finally hit the jackpot - a perfect forecast on day 1! Our original plan was to do one of the easy gullies in Coire An t-sneachda, then quickly round onto Cairn Gorm and back to the car park, making a leisurely first day out. As soon as we drove up to Cairngorm mountain car park, we emerged into the sun above a temperature inversion. The sun was warm and bright and everything was sparkling all around. We turned the corner and got a magical first glimpse into Coire An t-sneachda - everything was completely white - a grand sight: 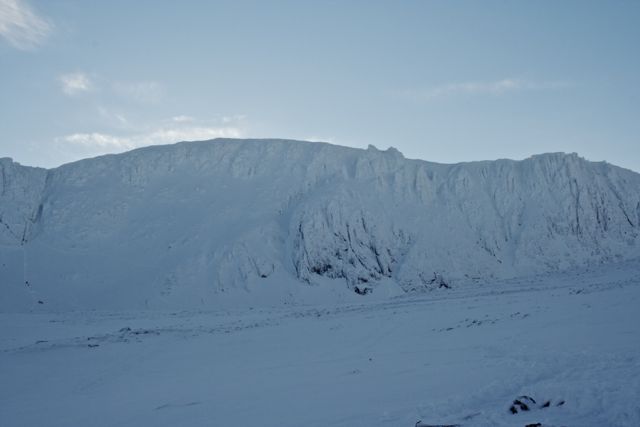 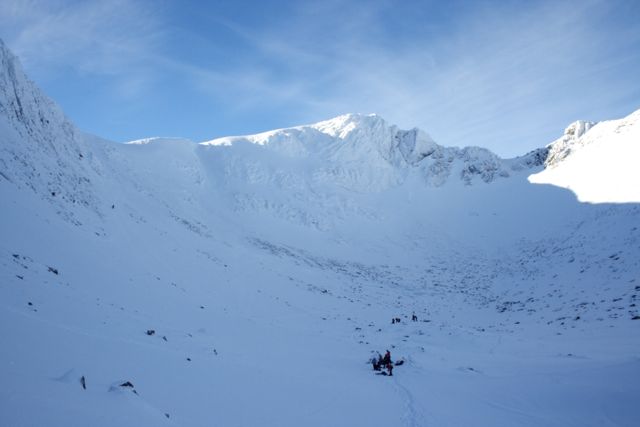 There were plenty of climbers in the Coire - we decided on the easy climb of Aladdin's Couloir. It was fantastic line, the snow was in good condition and there was only one slightly dicey icy step when we wished we'd had two ice axes and perhaps should have roped up - other than that it was a straightforward snow climb - very atmospheric. Just before we hit a small col known as Aladdin's Seat we heard some voices from above - it was a skier and a boarder waiting for a descent - there's nothing like the feeling of confidence shattering than knowing someone is going to ski down something you think is a tough climb! We hurried up to the col, had a quick chat and watched them descent into the Couloir - rather them than me! We had a rest at Aladdin's seat - a fantastic place to be and take it all in: A short climb from the col got us to the plateau Once up we couldn't believe our luck. There was no wind, extensive snow cover and wall to wall sunshine! After chatting to a climber who'd just ascended Goat Track gully, he commented that it was a 'One in a hundred' day. We quickly decided on a change of plan to the original short route to Cairngorm and headed across the pristine plateau to Ben Macdui to make the most of these rare conditions. I feel unable to articulate how wonderful it was up there, so I'll let the photos do the talking: 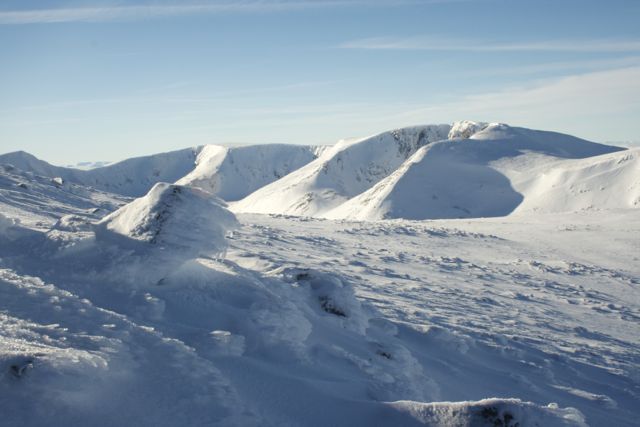 The view from the summit just took my breath away. It was quite busy up there with plenty of people taking advantage of the stunning conditions - plenty of ski tourers about. We spoke to a guy from Perth who said he'd been coming to the mountains for 50 years and this was one of the best days he'd ever had - I'm not sure I'll ever have another as good. We the had the long plod back to the car over the plateau via the shoulder of Cairn Lochan. The deep snow with an icy crust made this hard going, but we didn't regret it one bit - a memorable day not to be wasted.