It had been a while since the meandering crew had been out in the hills, the combination of Christmas, New Year and simply not all being about at the same time. Whilst plans were afoot for adventures further on into the year, a date of the 20th seemed possible for all concerned.

I had been up Am Faochagach twice before, the first time was a day I would never forget, as it was the last time I walked with both my Springers, Holly and Sam, and not least as it was the day that they both ran off down the side of the hill on return from the summit. Sam went walkabout and it was 4 days and nights later before he was found. He subsequently disappeared again in some local woods, believed snatched, never to be seen again. Both occasions I was humbled by the help from others who cane to help in the searches. They are both gone now, I miss them dearly, and cherish this rare shot of the two of them on the summit on that first ascent My second visit, was the day after my Compleation, 2nd July 2017, and despite the merriment of the night before and messages of best wishes, managed to drag myself and the Essex crew across the soggy walk in and to the summit

This third visit would present none of this sogginess, but other challenges awaited.

The forecast for the day was a good one, but there had been heavy snow in the run up and for the Southern contingent of two Willies and a Jonny lol, a good 3 to 4 hour drive in what could be difficult driving conditions. But that’s just a normal drive for us meanderers. The advance party, Debbie and Adam would make their way over the previous night and park up at the start in Ayevan 2, now fully equipped with heating, and oh how that would be needed this weekend.

The Ethernet was running hot with messages on the Friday night and it was game on. The banter had already started.

I headed over on the Saturday morning from Miltonduff, devoid of snow for many weeks, whilst other parts of the country had been hit with some depth. I was looking forward to a good snow day.
The roads were clear to Inverness and onto Garve, although the mercury was dropping and as I reached the Ben Wyvis car park, snow cover increased and the temperature was down to minus 7. The car park here did not look negotiable with a good foot of snow, although the gritters had been out and the road was relatively clear.
Just before the Aultguish Inn, the temperature had hit minus 10 and my Tesco Winter screen wash was no more, I had to stop to throw snow on the screen to clear it 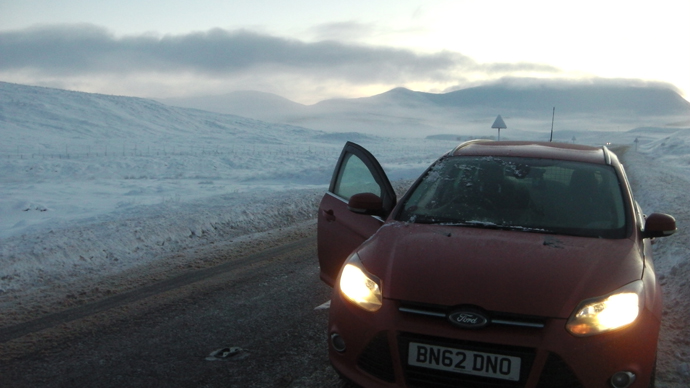 I found Debbie and Adam parked up before the walk start point, it was as far as they dare go, having driven over in the dark. I reversed into their car park, to ensure my front wheels were close to tarmac.
As far as I dare With the kettle on, after a change of gas bottle, ably assisted by some Polish workers, who fortunately had the right size spanner for the gas…. Oops Debbie

But already, what a day, as the sun rose over a frozen Loch Glascarnoch, it was stunning, and already worth getting out of bed for. The early morning sun catching the hillside across the Loch I must have been on cup of splosh number 3 and bacon roll consumed when the two Willies (sorry Wullie) and the Jonny arrived and joined in the breakfast banter and photo shooting as the day dawned bright and clear.
Willie checks the snow depth We departed the premature car park the couple of miles to the start point by the Met office station just beyond the bridge, to face the next problem, the car park was under a heap of snow, but the meanderers were prepared. Serious shovelling ensued, whilst Jonny supervised and for some reason I parked ready to reverse, blocking the entire A832. Some had their own method of snow clearance, albeit in the wrong place for assisting the car park clearance. The team prepared for the off, it was already 1115 hrs.
Winter brings a completely different aspect to walking, lack of daylight not being one of the constraints with us meanderers, but best of all is it gives the landscape a clean slate, regular footpaths all but disappear and you have complete wilderness restored. We set off across the road to the stile and the snow was deep from the start, and headed off for the river, in single file, breaking trail took some effort and time, such that Wullie had turned grey/white by the half way mark to the river crossing. The odd deeper hole was encountered en route until we made the river, somewhat exhausted not from breaking trail but from the banter and constant laughter, how I love these trips.
Now river crossings in warmer months can be sufficiently hard, but wet feet in such conditions as these are to be avoided. But despite some decision swaying mid-way across by Willie, we all made it over, but some dampness had penetrated my Yetis (I wasn’t quick enough to stop seepage past the Velcro), but nothing serious. Jonny won the prize for wet feet, and a change of socks and emptying of boots was required on the far side. One bold step for mankind… the deep bit After some refreshment, I seem to still own the coffee sharing team flask, with at least one other

, we set off to head for the bealach, again in knee deep snow, or higher for those challenged with height

, except she wasn’t here today As it steepened we took it in turns to break trail, 200 paces each, the trail behind would have made a perfect toboggan run for a swift descent, if only the snow was firmer. But we didn’t care, the views, the sun, these are the days we live for. There’s only so much looking at maps, reading books, following forums, until you just have to get out there. By 1530hrs we were still some way off the bealach, with as much distance still to cover as we had already done and with no let up in the snow depth. We stopped for a break, merry banter and decision time. It could be that once on the ridge the snow could have been blown clear, or at least to a more pace inducing depth, but either way we would be coming off in the dark, no change there then lol. Not to mention the effort to get this far and so it was to be the turn round point. A beautiful day, with great friends.