Independence Day on Ben Nevis via the CMD Arete


Ben_Nevis_Via_CMD_2015-07-04 115213.gpx Open full screen  NB: Walkhighlands is not responsible for the accuracy of gpx files in users posts

Arrived in Glen Nevis campsite on the Friday night to glorious sunshine, knowing full well that wasn't going to last but still I remained optimistic of just maybe getting at least half a good day on the Saturday to conquer Ben Nevis via the CMD. Oh how foolish was I. Started off at 4.30am and made my way to the pony track via the hostel route. Some walkers had left the campsite at 22.30 on the Friday and I passed them at around 5am making their way down, shortly after which there were constant groups winding down the path sporting various charity T shirts. All it would seem had taken a midnight challenge and were now looking a bit weary, with one guy in particular seeming a bit delirious as he mumbled to himself, eyes half shut and robotically walking down. Glad he was on the long straight to get off the mountain rather than half way down. Finally made my way to where the path splits to take you round to the CIC hut and to begin the ascent of the CMD. At this point the weather was quite mild and calm, i was still hopeful that things might stay ok until i had managed the ridge. As soon as i got alongside the Allt A Mhuilinn the wind kicked in. The forecast had warned of 60mph winds on lowland and they seemed to be spot on with this. Making my way across the burn and starting to get up to the CMD the rain started and finally the clag lowered and the ridge was gone from sight, still some views of the Ben though which really has to be seen to be believed. 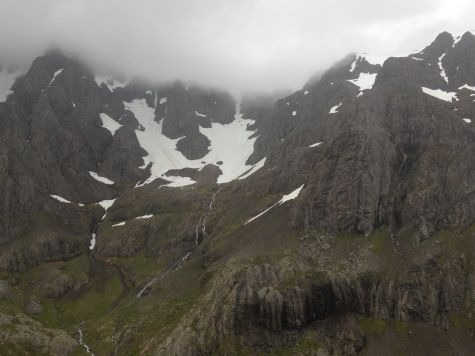 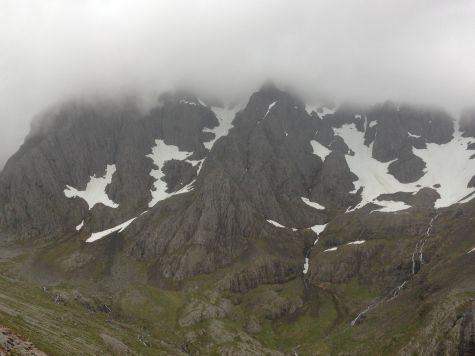 When i finally got up the steep face i looked down into the valley and not another soul was in sight, this was around 6.50/7am and i had expected that others might still have attempted this route despite the weather but the whole time i was up on the CMD and ridge there wasn't sight or sound of anyone. As i made my way along to the summit of Carn Mor Dearg the wind was relentless, and this is where i think it's important to outline the conditions up there just now. I knew i was in for some scrambling and there is very little in the way of a formal route on the ridge but at the moment there is still almost a metre of snow lying to the left of the ridge and this is like sheet ice. The path where it exists and lets you drop off the ridge is encroached by this at various points and as such you are more or less stuck to scrambling on the top of the ridge. In good weather this will be enjoyable and the views i'm sure are tremendous (i seen about 2 seconds worth when the clag lifted before crashing down again). In the weather i was experiencing - 60/70mph winds, rain and visibility down to around 3/4 metres it was hard work and became a crawl rather than a scramble at some points.

Still, i carried on and finally reached the foot of the boulder field leading up to the summit of Ben Nevis. As expected the summit was very busy, very windy and still covered in snow(ice). I stayed for a few minutes to get a drink of water and check out the ruins but the weather was never going to change so i decided to make my way down, happy that i had completed the hike but disappointed that i picked the wrong day weather wise but i'm sure most end up in conditions like this. The "tourist path" was busy on the descent with an endless string of people making their way up and my thighs took a pounding walking down.

Was surprised to see what some people were wearing and i wonder how many made the summit given their choice of clothing. Eventually I was down and back at the Nevis Campsite, exhausted, elated to have made the route and now eager to do it again in finer conditions.
Click to mark this as a great report. Register or Login free to be able to rate and comment on reports (as well as access 1:25000 mapping).


Stob Binnein from the South