I realise that a couple of years ago when most of the felling was taking place it would be a mess, but not now. I read the reports and made my decision, while I liked the Ballachuilish route the lack of daylight and suffering from a bout of cold I thought the Duror route might not be so bad

(how many times do you have to do that)?? And the odd stop to play with my new box of electronics and glass. So I arrived at Duror and soon was on my way with a cool but dry wind, it had the feel of a good day in the hills so following the route plan I was soon on the forestry tracks and it was steep-ish but really not bad at all The start of the forestry roads A wee look back to Ardgour

. All was frozen so I guess that the walking was maybe a bit easier than if it was wet and soggy, its a good couple of miles walk but soon enough you come to the end of the main track, The start of the new path up to the hill 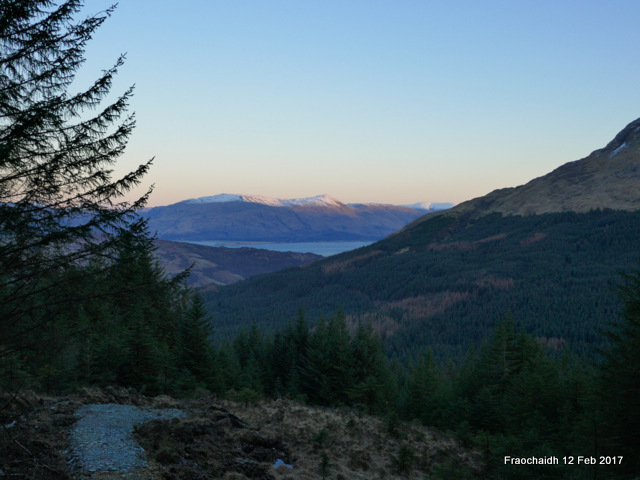 Nearly at the end of the new path Great views all around :-)

The views were all starting to open up all around especially to Ardnamuchan and into Ballachulish and the Aonach Eagach area, Stunning! So I was where I wanted to be so I continued up the obvious ridge heading for the lochans that are marked on the maps, I headed for the S/West end of the first lochan just to get around it but if it is misty at all be careful as there is a bit of a drop into the lochan and I guess you could get caught out if not paying attention, once past this wee issue there is no more problems that should trouble you, if its clear just follow the obvious ridge, The fairly obvious ridge to the summit A wee break just to take in the views but if a bit claggy the old fence line will take you to the same destination. I had it very good so I just soaked in all the views and took numerous photos in every direction. It was a fairly easy walk and in around 2.5-3hrs you should be at the summit and oh the views are some of the best I`ve seen in this part of the world

Final ridge to the summit Once you`ve had your fill of photos I love this type of thing, on my way down now. Once wee were out of the wind we stopped for tea, and what a view! The welcoming committee when you get back down (never noticed on the way up) !!! One last view back to Fraochaidh Stats for this walk


The Merrick and Shalloch on Minnoch plus 2


Location: Doune
Activity: Walker
Pub: Clachaig
Mountain: Bidean nam Bian
Place: Glen Etive
Gear: Rab Phantom Fleece
Ideal day out: My ideal day out is probably a fine summers day doing a ridge walk somewhere like Knoydart or maybe a cold frosty clear day with loads of firm snow to walk on. I dont mind the wind,cold or snow but I do not like the rain from any angle.
Munro rounds: 1